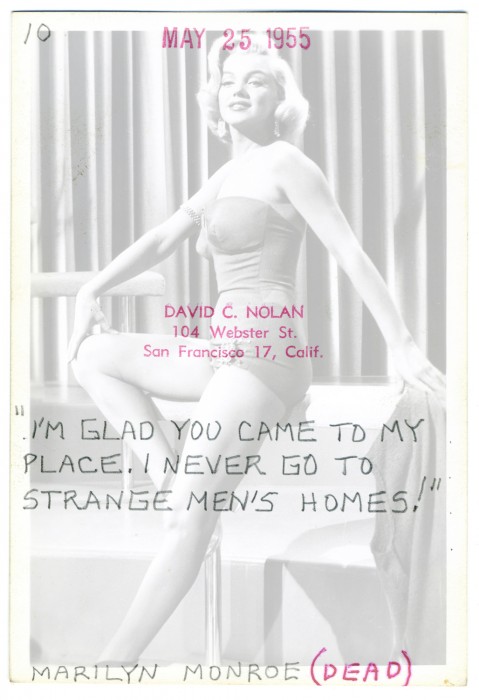 The subject of obsessive collecting is an interesting one to examine right after the experience of holiday gift giving, where one often ends up with more of more to add to an already full larder. Artist and photographer Jacinda Russell is fascinated by the obsessive behavior that certain individuals manifest in order to hoard a particular object (and the objects themselves). Today’s post reflects work from three series–two about other “collectors” and an autobiographic series about her own desire to acquire and possess, transforming objects into self-portraits, representations of place and symbols of fixation.

Jacinda works primarily in the mediums of photography, sculpture, installation, and bookmaking. Her artwork has been exhibited at Texas Gallery, DiverseWorks, Atlanta Contemporary Art Center, Houston Center for Photography, and the Academy of Fine Art & Design in Wroclaw, Poland. She was awarded residencies at the Ucross Foundation and Anderson Ranch. She is represented in the collections of the Center for Creative Photography and the Museum of Fine Arts, Houston. Her writing is published in the book Learning to Love You More and the periodicals SPOT, Afterimage, Orlo and Art Lies. She regularly contributes to the blog Something Between Want and Desire and is a member of the Board of Directors and participant in the Postcard Collective. Born in Idaho, she received her BFA from Boise State University in Studio Art and her MFA from the University of Arizona. Currently, she is an Associate Professor of Art at Ball State University in Muncie, Indiana

David C. Nolan and Arline Conradt’s collections embody masculine and feminine desires through memorabilia long before the digital age. They were interested in culture via celebrity and advertising yet they were also repressed. A Tale of Two Obsessions explores my interest in one man and one woman’s fascination with the found image, their methods of archiving and organization, and the perversity of their actions.

Until recently, Nolan’s photographs of Marilyn Monroe were stored in a safety deposit box, acquired for $5 at an antique store in the 1980s. For several years, members of my family believed that Nolan was the photographer, but the true creators are Earl Theisen, Bert Riesfeld, and countless others who photographed films like The Seven Year Itch for publicity. After the completion of these images, I posted them online and have since learned that Nolan owned roughly 300,000 photographs of women in various states of undress. He retreated to his basement where he labeled his collection, wrote captions on each photograph, and stored them in thousands of cardboard boxes. After his death, his wife, horrified at this trove, gave them away to the first person that would remove them from the house. They gradually circulated along the West Coast and 29 ended up in my family’s hands in Boise, Idaho.

I digitally combined the front and back of Nolan’s photographs and enlarged them two and half times. Marilyn Monroe remains ghostly while the rigid text, spelling errors, and (DEAD) written years later in an unsteady hand, dominate. 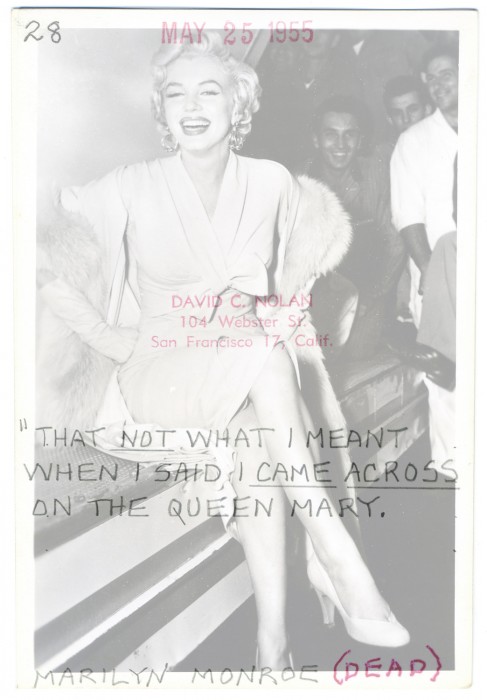 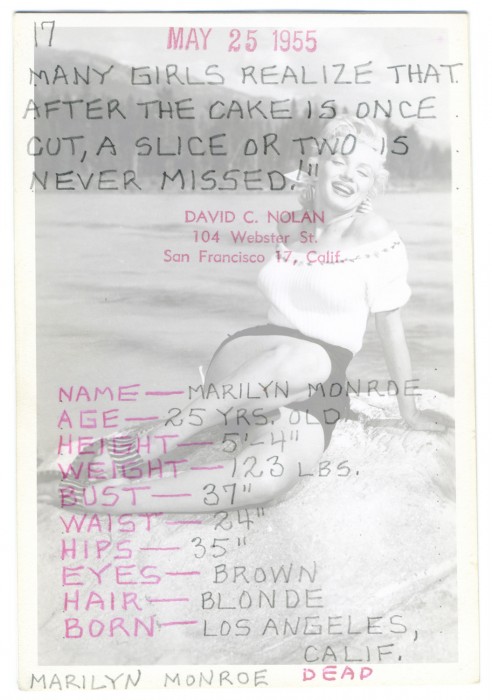 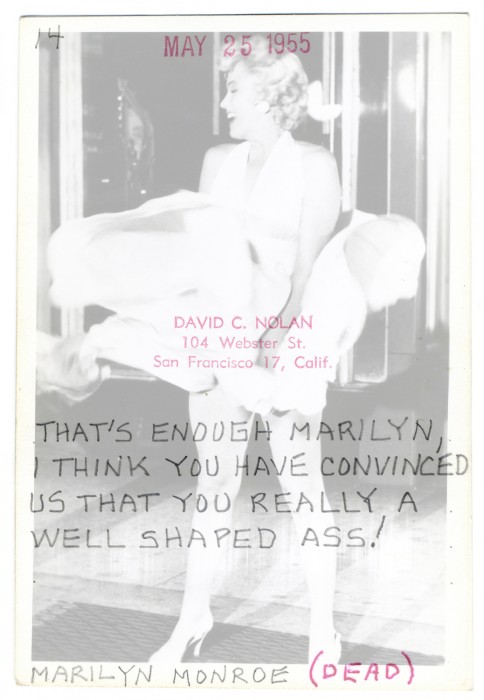 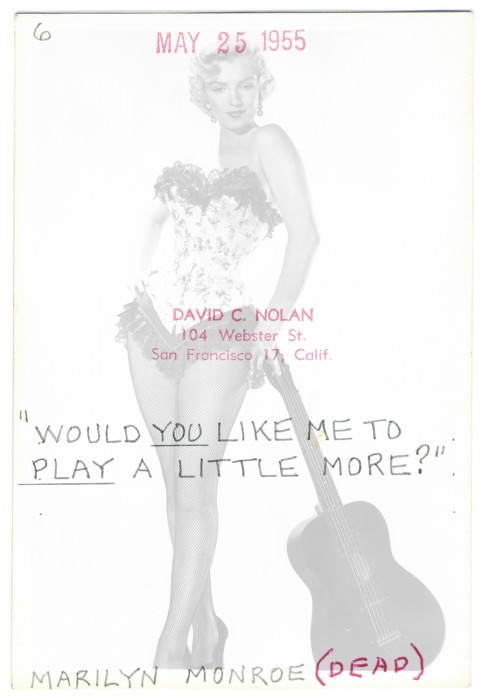 Conradt’s cat scrapbook, containing 3,770 reproductions of cats from the 1940s – 1950s, was a gift from my father (purchased in Milwaukie, Oregon in the late 1990s). Evidence inside this hefty book indicates that Conradt was from Western Oregon and she had a daughter named Paula, but there is no reference made to a significant other. Her mother is a prominent feature as is her sister Pauline who sent her the majority of the cards and drew cats in the style of Fernand Leger. There are notes and full paged letters addressed to Conradt’s cats: Smoky, Teat and Goldie. There is even a cat birth announcement. The most perverse objects in the book, however, are 70 year old cat claws taped to the inside of cards “signed” by Smoky.

All 310 pages of Conradt’s scrapbook are printed as wallpaper with three objects displayed on pedestals in the foreground: reproductions of the 1940s cat claw greeting cards with Smoky’s “signature” presented on two found photo album covers; a contemporary version of the scrapbook with 3,770 felines; and a greeting card dedicated to Arline with over 500 claws from 38 cats. 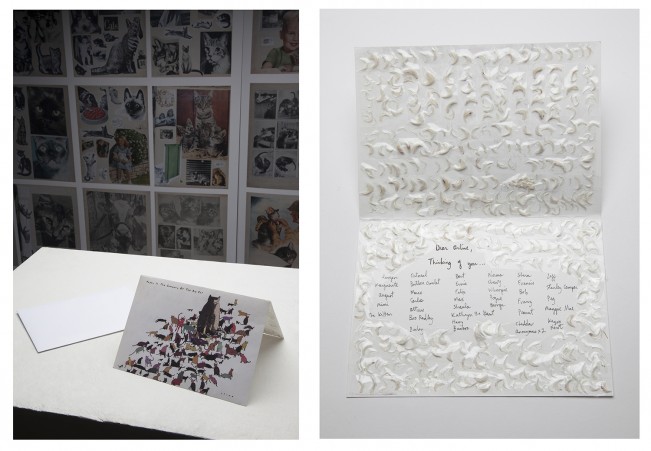 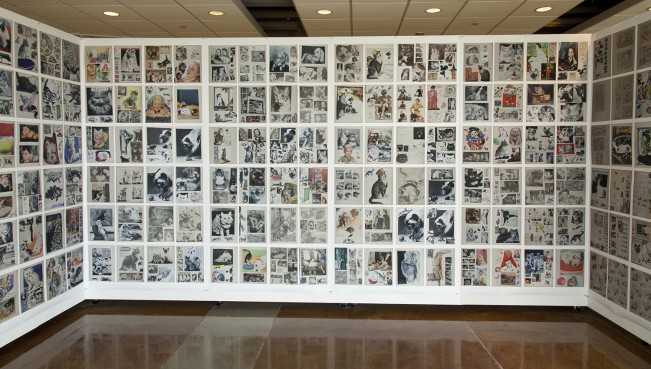 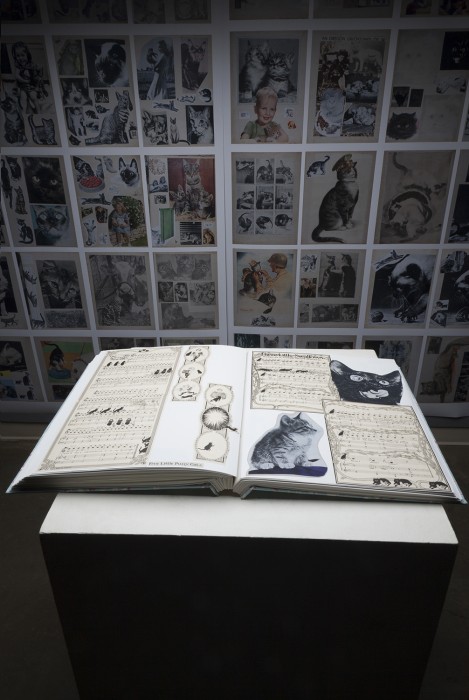 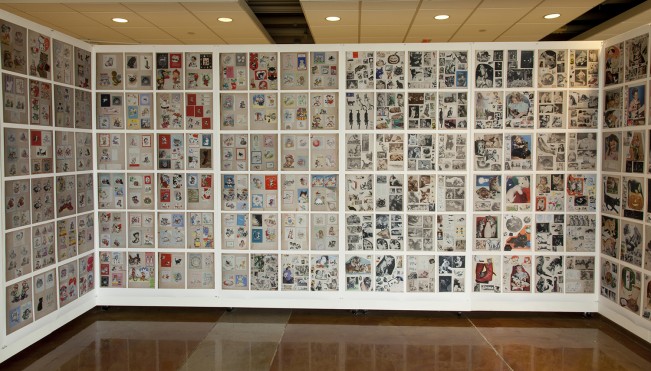 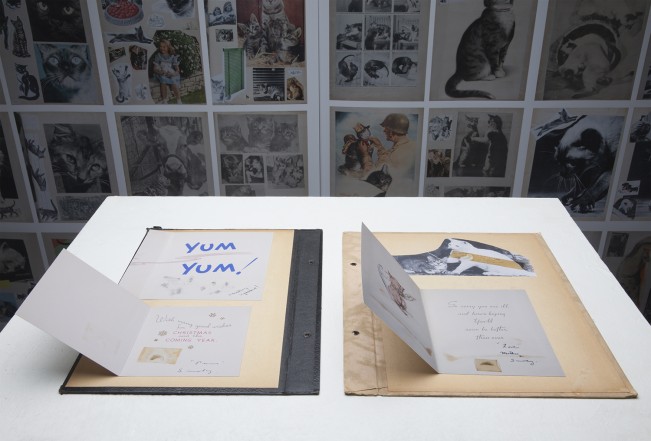 I come from a family of collectors and I was taught at a very young age the importance of possessions. They define what we like to observe, what we perceive ourselves to be, what we once lost, and what we want to remember. Autobiography started in 2002 when I collected my lunch bags because I hoped to make a book from the worn paper. Years later, they became a chronological marker that defines my life.

There are two parts to the series: objects used to mark time (12 for 7 Years as an Adjunct Professor: 2000-2007, the hair and swimsuits) and items that pinpoint a specific event centered around change or loss (5 Objects Photographed Before Thrown Away, The Collection (and Its Return), and We are Not that Different, He and I). Christian Boltanski’s inventories from the 1970s in addition to Sol Lewitt’s Autobiography 1980 are important influences.

I save until an event occurs that indicates I should stop. It could be as life changing as moving to a new part of the country or as minute as my mother buying me a blue insulated lunch bag. I monumentalize the mundane elevating stained lunch bags and sagging swimsuits into a higher status. These inconsequential objects are one aspect of my identity, easily disposable yet somehow kept. 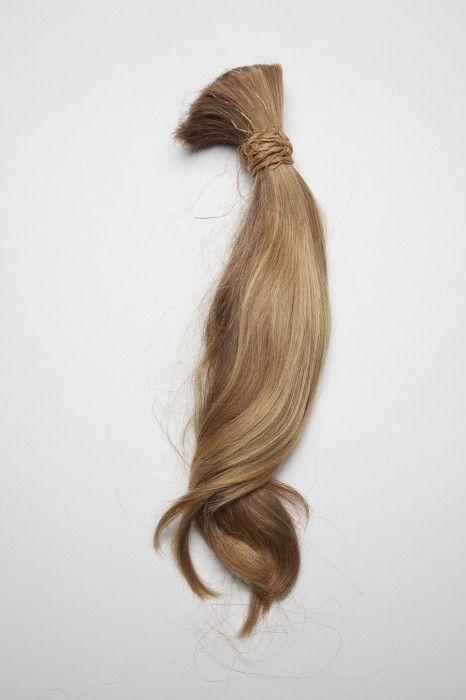 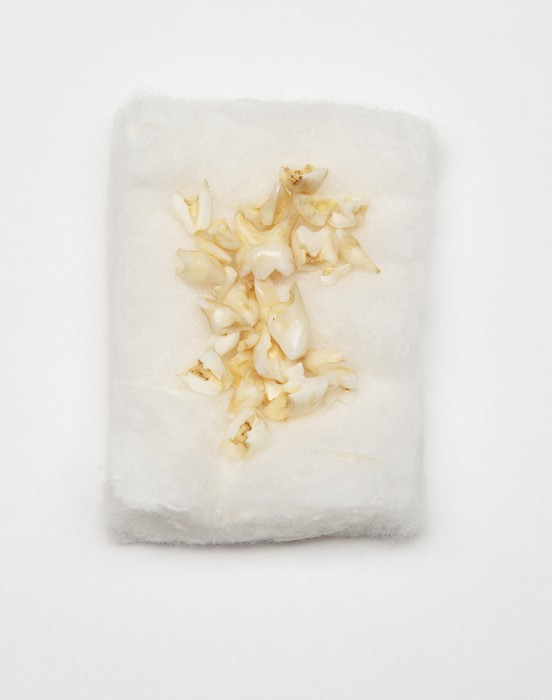 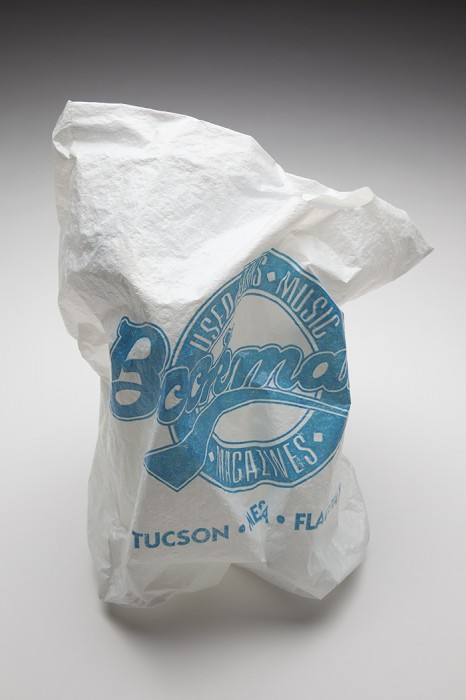 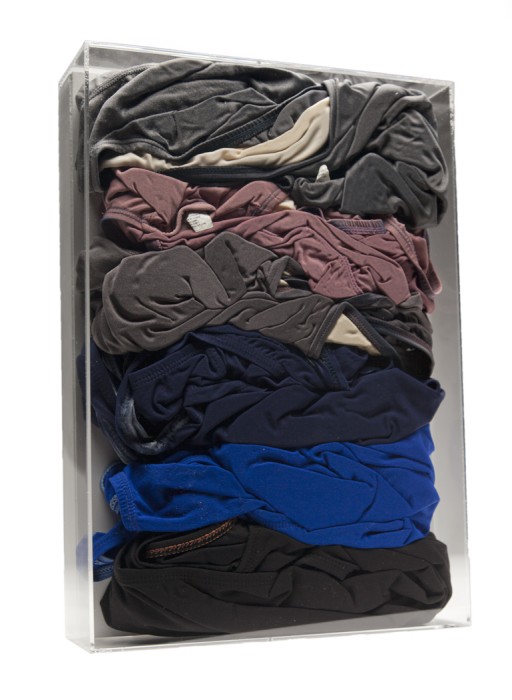 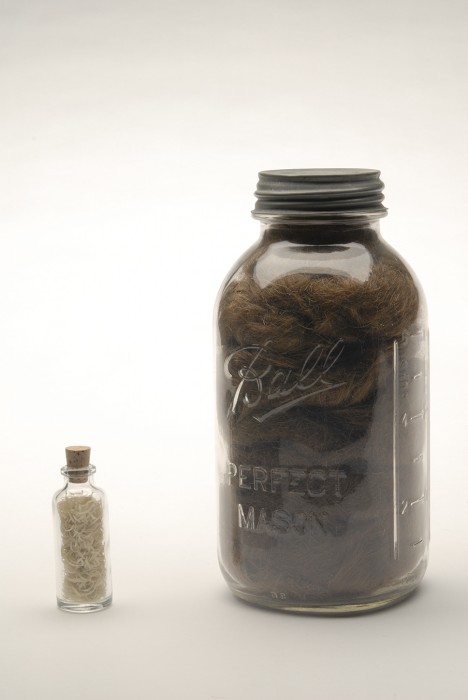 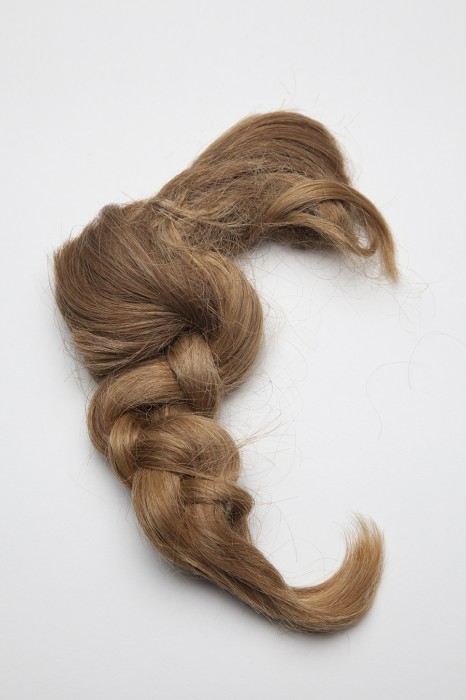 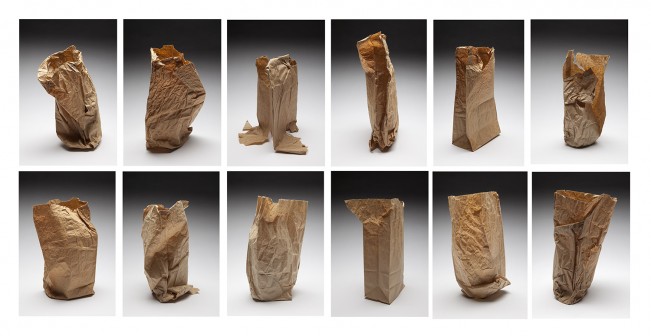 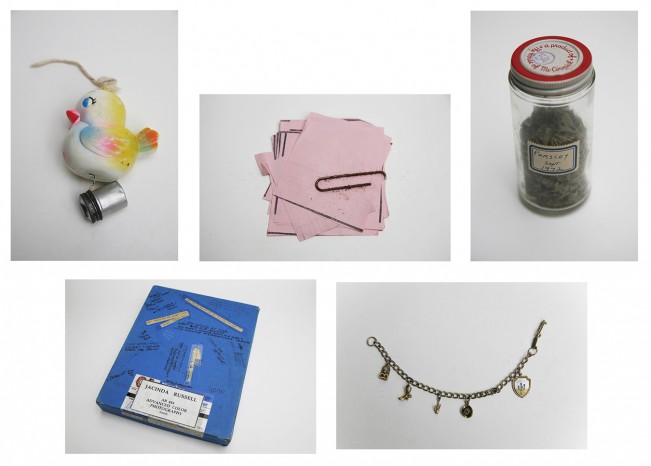