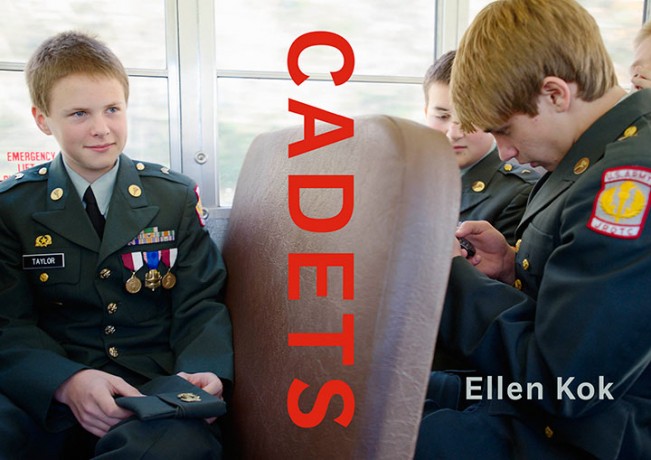 In the school bus on the way to a Veterans Day service at the Veterans Affairs Medical Center. Left to right: Shawn Taylor, Forest Randall and Codi Amsden. November 2010

Dutch photographer and writer Ellen Kok has just released a monograph through Netherlight Publishing (Cadets is for sale at www.cadets.us, Amazon and photoeye.com) that examines the place of the military in American culture. For two years, she followed the cadets asking herself the questions: What do marching in formation, doing push-ups, shining uniform buttons, firing air rifles and addressing each other with “Sergeant” or “Captain” do for young people? Does it help them to cope with the challenges life throws at them, at home and in school? And will the Wildcat Battalion manage to keep its gold star of Honor Unit with Distinction?

Cadets explores the importance of the military in American society through the lives of teenagers in a poor region of the USA.  Ellen documented the daily life of the cadets of the Junior Reserve Officers’ Training Corps (JROTC) at Fall Mountain Regional High School in Langdon, New Hampshire. The book includes essay written by Ellen that accompanies the photographs and carries the reader into a classroom in a poor region of the USA, and into the hidden lives of American teenagers. Cadets is a Critical Mass 2011 and 2012 Finalist, and was accepted into CENTER Review Santa Fe 2012.

Ellen studied at the School for Journalism in Utrecht, the Netherlands, before working as a photography critic for several Dutch newspapers and photography magazines and as a freelance photographer. In recent years she has been working mainly on long-term documentary projects, which all revolve around the lives of young people. She currently is based in Linschoten, the Netherlands and in Drewsville, New Hampshire in the USA, where she recently completed her book Cadets and is working on four more.

Her other books include School, an in-depth portrayal of a large school in a small city, as well as a snapshot of the daily life of young Dutch people, selected as one of the best photography books in the 2004 Photo Annual of Photo District News. (De Verbeelding/Netherlight, 2003), On the Land, Farmers and Nature, with text by Ineke Noordhoff (Atlas, Amsterdam, 2006) and On a Weekday, Five Dutch photographers picture daily life in the buildings of EGM architects (De Verbeelding, Amsterdam, 2005). 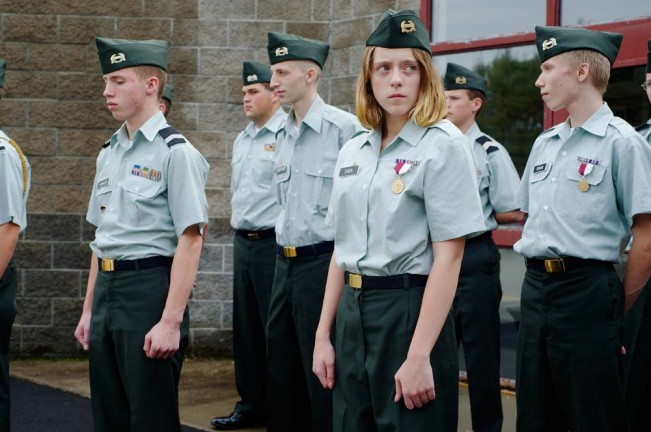 “Try, Try, Never Die, HOOAH!””
Many students of Fall Mountain Regional High School in Langdon, New Hampshire, begin class with that yell every day, sometimes delivering it in military uniform. They are cadets in the Junior Reserve Officers’ Training Corps, JROTC, a U.S. Army-sponsored program. Its goal is not to turn children into soldiers, but to motivate them to become better citizens by teaching them military values Americans admire: service, honor, skill and leadership. Military techniques that challenge the students, both mentally and physically, are used to improve their self-esteem and give them a better grip on life. 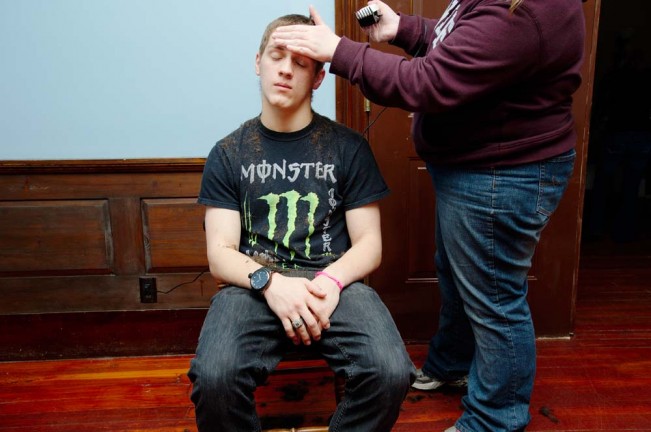 Nick Greenleaf getting a haircut at home, trying to meet the standard of the JROTC Cadet Command regulation: “Hair will be neatly groomed. The length and bulk will not be excessive or present a ragged, unkempt, or extreme appearance. Hair will not fall over the eyebrows or extend below the bottom edge of the collar.” JROTC teacher Major John Cenney notes: “We try to work with cadets on their grooming. We know that hair styles are very important to young people. We don’t want to lose someone over something we can solve together. What’s in their head is more important than what’s on their head.” Charlestown, February 2011

For many students, this is precisely why they seek out the elective course. They come from broken households, several don’t live with their parents anymore, and some already have adult responsibilities: a full-time job, a baby. The class offers them camaraderie and the structure, direction, and security that is often missing at home. But many of the cadets also come from families with a military tradition and they often express their desire to follow that path themselves. 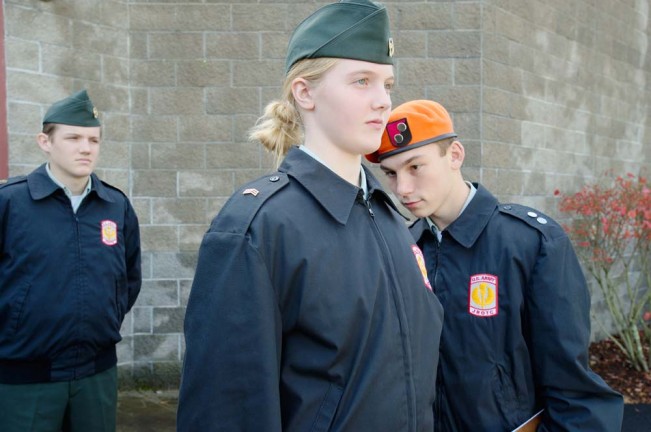 “In the U.S. there are JROTC programs for four branches of the Armed Forces, the Army alone has over 1,700 in high schools all over the country with more than 320,000 students.

I must admit that I approached JROTC with the same misconception many Dutch people, and even many Americans, would have: that it was about recruitment. After Fall Mountain High School’s Senior Army Instructor, Major John Cenney, had made certain I understood it was not, I was still left with the fact that here was a high school class based on military structure, with children in military uniform, performing drill and shooting air rifles. Also, many of the cadets come from families with a military tradition and they often express their desire to follow that path themselves.” 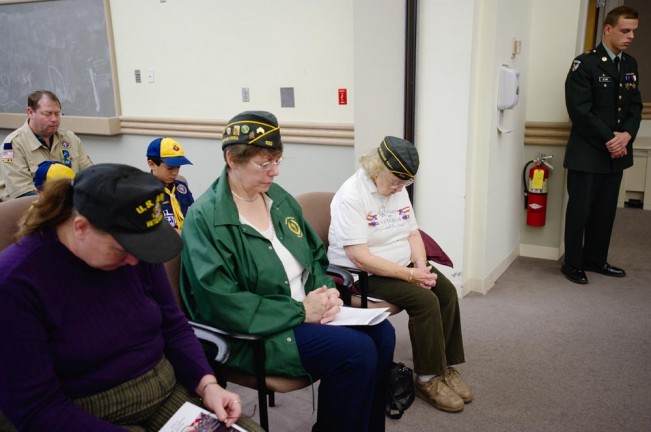 “Once the cadets began to confide in me about their lives and I became friendly with their two teachers, veterans of armed conflicts overseas, who also began to share personal stories with me, I understood I had found the right place to learn, not only about the military in American society, but about many other aspects of American life I still didn’t really know about. A high school is not an isolated world, like a military base; the community that this one belongs to is like any ordinary American community – and being very ordinary, some of its young people become soldiers.” 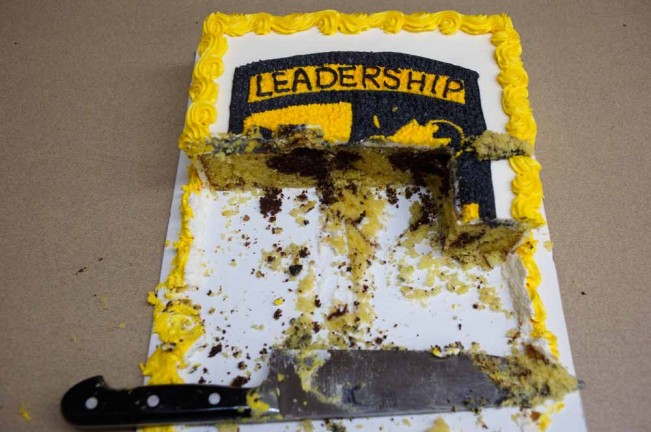 For the Spaghetti Dinner, a fundraiser for the unit, cadet Riley Sabol has baked a cake with the JROTC logo. Charlestown, October 2011 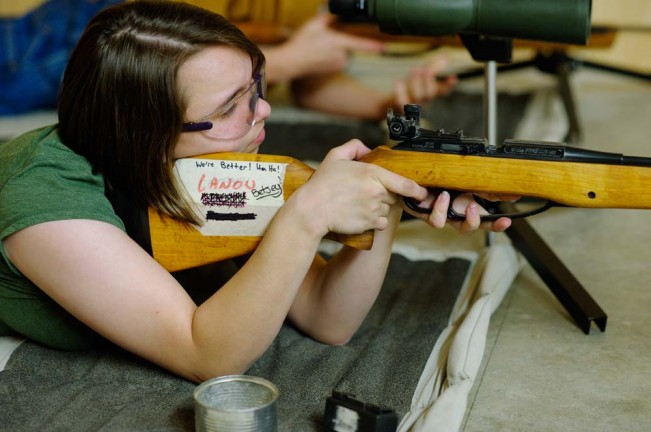 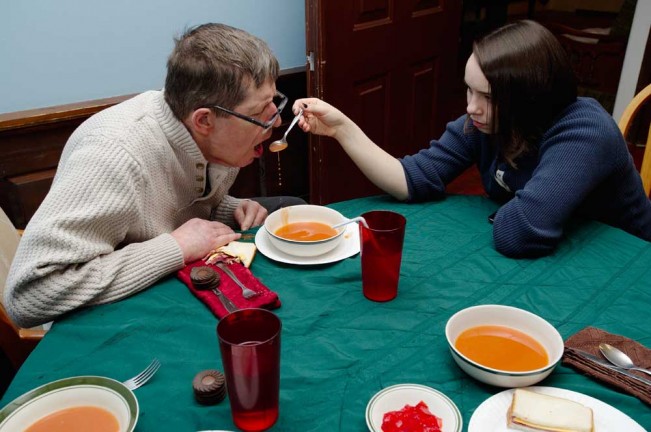 Jenna Lanou feeding Jim Smith at the nursing home Peaceful Harvest, which is run by the mother of fellow cadet Nick Greenleaf. Jenna had a part-time job there. Charlestown, February 2011 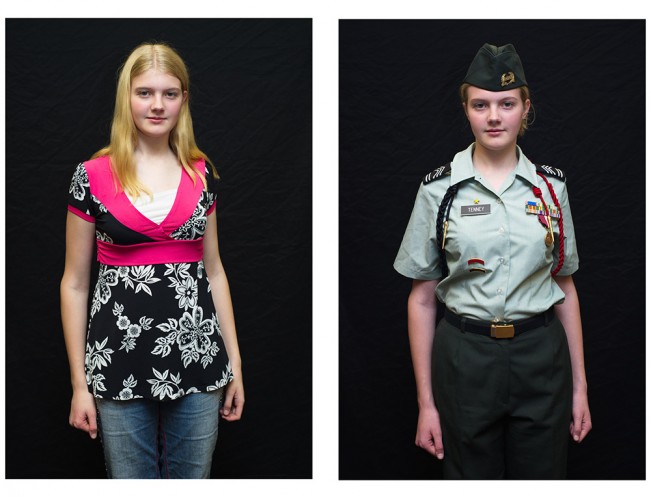 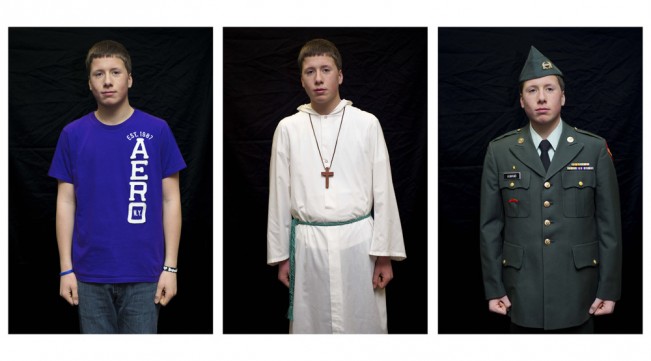 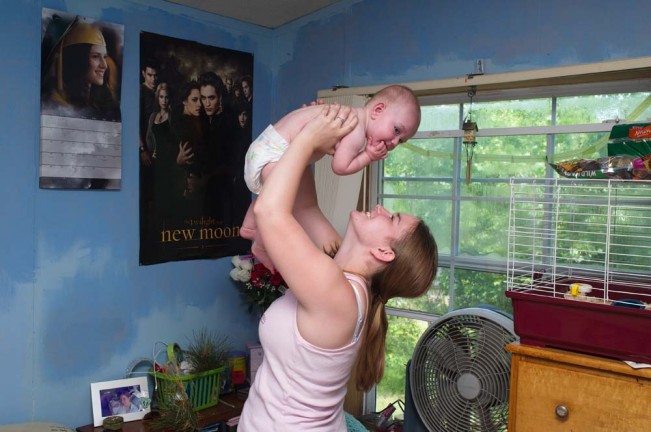 Ariel Moore, 17, and her 6-month-old daughter Liberty in the room they share. They live in Ariel’s parents’ mobile home with her younger brother and sister. Charlestown, June 2011 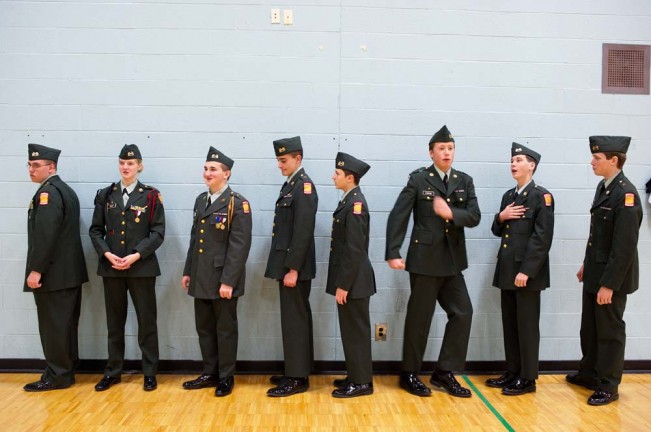 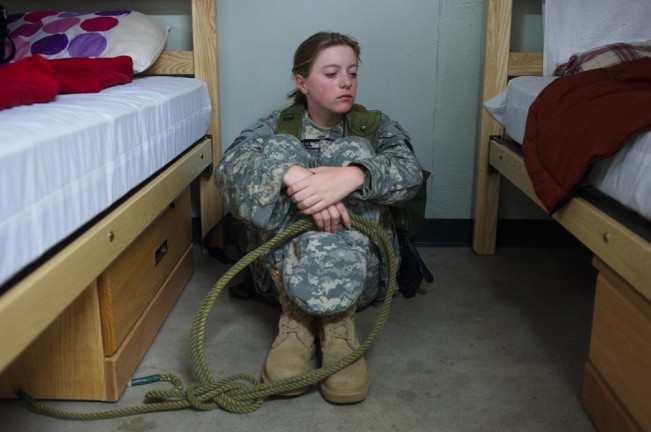 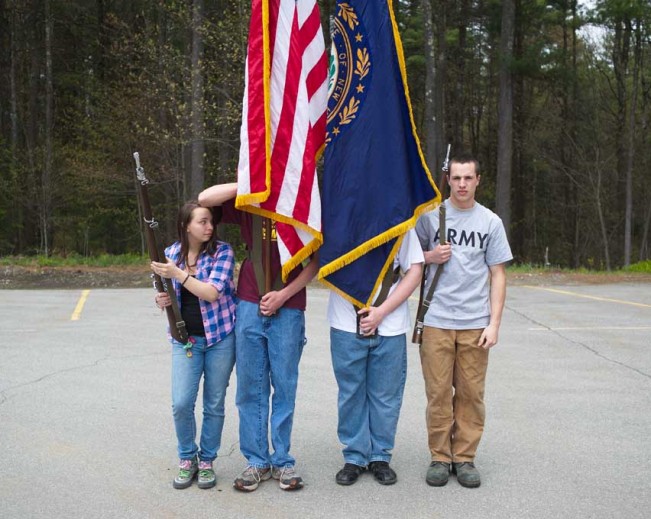 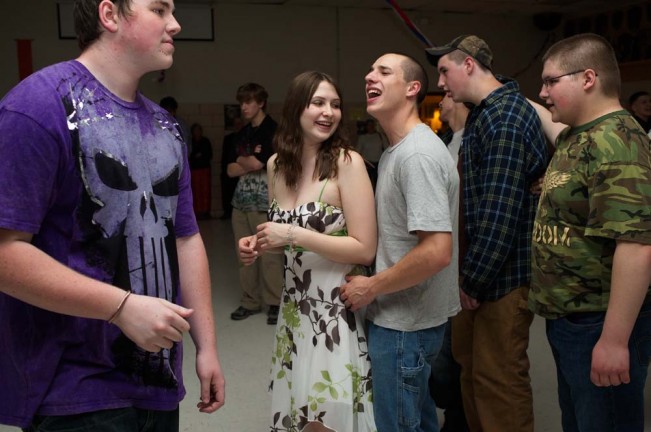 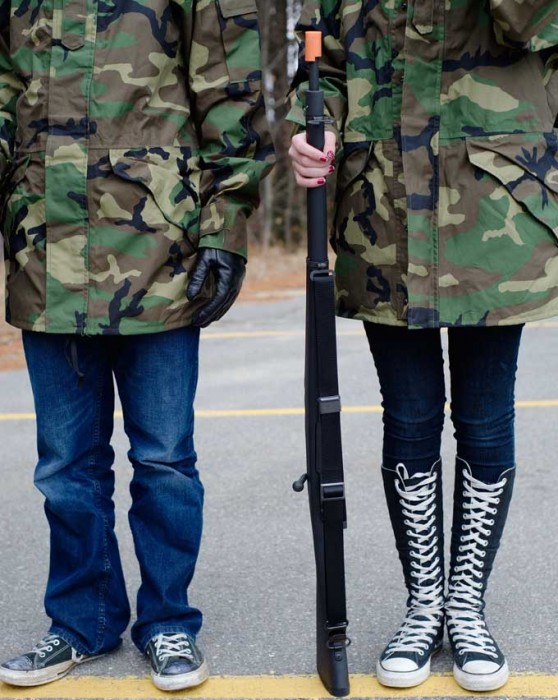