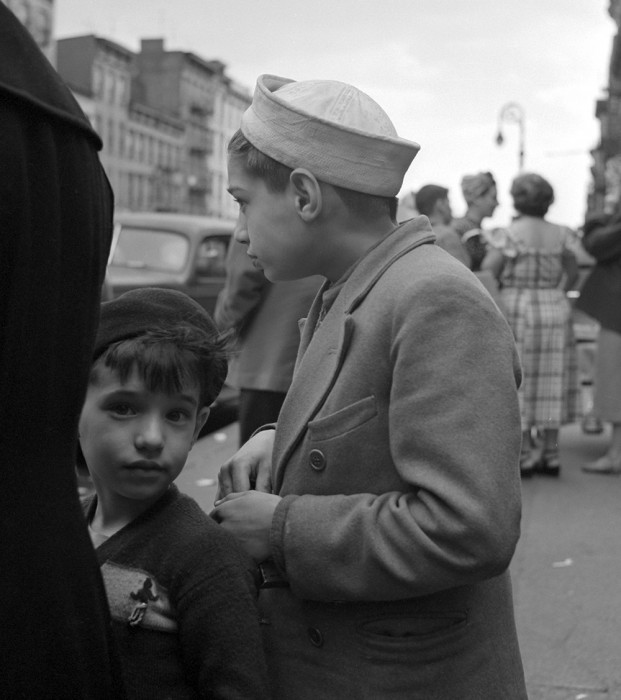 Today’s post is a celebration of photographer Martin Elkort, who has spent a lifetime documenting America capturing communities from Coney Island to Los Angeles. Tomorrow night, August 15th at 7pm, the Los Angeles Center for Photography will be screening the movie, Martin Elkort: An American Mirror honoring his photographic legacy.  We in Los Angeles are excited that Martin and his daughter and filmmaker, Stefani Twyford, will be present at the screening to discuss and answer questions about the film. The work featured today is from his series, The Lower East Side, captured in the 1940’s and 1950’s and I am also including an essay by Martin on What Photography Means.

“Born in New York, Martin studied painting at Cooper Union in New York City and then  joined the New York Photo League, an organization of photographers that served as the center of the documentary movement in American photography. There he studied under masters and learned to become adept at what he refers to as ‘stealth photography.’ With his camera strapped around his neck, he would walk peering down into the 2×2 inch ground glass of the camera. He developed the skill of walking right up to a person and taking their photo without them even realizing it. During this period he worked at the Wildenstein & Company Gallery where he further enhanced his photographic knowledge and technique.

After marrying in 1953, he realized he would have to support his family by means other than photography. He moved to New Mexico where he was an art editor and staff photographer for New Mexico Magazine. His family moved to Los Angeles in the early 1960s,they spent some time in Alaska and then moved back to New York, where Martin worked in the travel industry. After retiring in 1996, Martin wrote several books and magazine articles, worked as a food critic, and re-ignited his interest in photography. He currently lives in Los Angeles with his wife where he continues to enjoy his street photography. He also writes articles about photography for Rangefinder and Black & White Magazine.

Martin Elkort’s work is widely exhibited and can be found in the permanent collections of The Museum of Modern Art, The Getty Museum, The Columbus Museum of Art, The Museum of Fine Arts Houston, The Holocaust Museum in Washington DC, The Jewish Museum in Brooklyn as well as many corporate and private collections.” 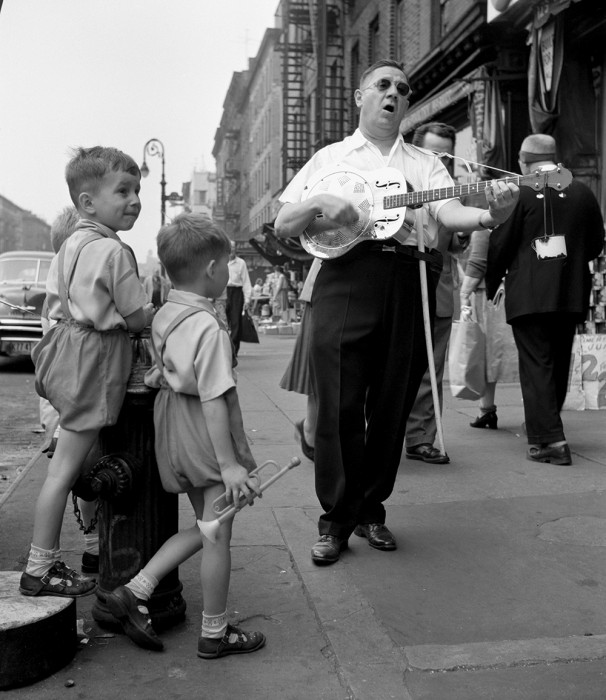 By Martin Elkort
(Remarks given during the opening of Martin Elkort’s one-man show at the Barry Singer Gallery, Petaluma California in February of 2006)

I’d like to take a few minutes to talk about what makes a photographer get up day after day and go out into the world to take pictures as well as what makes the world (museums, galleries, collectors and casual viewers) respond to these photographs.

Photography is a paradox. On one side of our metaphorical photographic coin is the reality of the image, or what we perceive to be the reality. Who can deny that the lampposts of Paris looked exactly like the ones in Eugene Atget’s photographs? A lamppost is a lamppost is a lamppost. As time passes they evolve from gas to electric to mercury vapor, but they are still lampposts, just as they were in Atget’s day. Except that, as time passes, Atget’s lampposts acquire the patina of history, just as his vintage photographs do. His photographs thrill us to this day because now they are not only art, but they have become a time machine to transport our imaginations into the past—the same past inhabited by Voltaire, the very same streets trod by Dumas and the patriots of the Revolution, riding in chains to the guillotine. Did Eugene Atget imagine that is what his photographs would come to represent as he schlepped his heavy view camera and tripod and his plate holders through the deserted streets of his beloved city. Perhaps! 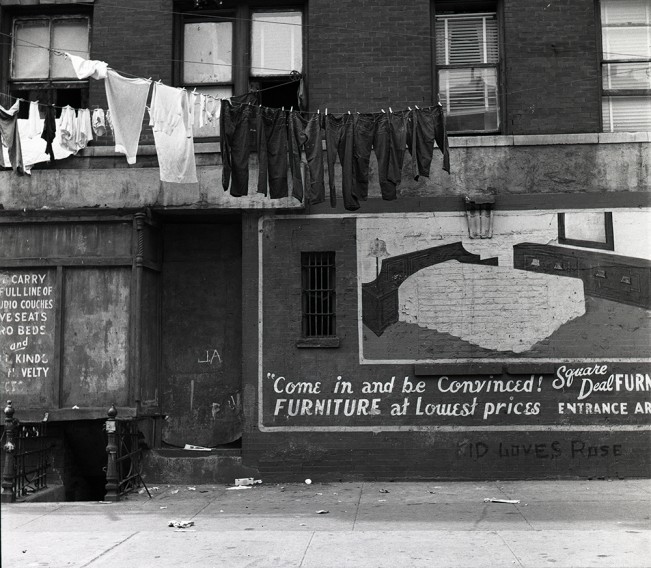 The other side of the metaphorical photographic coin is the photo as untruth, a manipulated image, a lie. Susan Sontag wrote about this side of the paradox in her book, “On Photography.” A photograph is a slice, a laboratory cross-section cut from the inner/outer movie of our lives, which is most often taken out of context. Diane Arbus’ photograph of a young boy holding a toy hand grenade is terrifying in its implications of a twisted mind. But upon examining the contact sheet, we see that the other images are all of an apparently normal little boy, rather pleasant, playing. Has Arbus served the cause of truth or did she take an odd, accidental pose and use that to represent her inner perception of the outer reality?Or what about the photographer who crops his pictures, tones them, textures them and otherwise manipulates them in the lens and later in the darkroom—is he or she serving the truth or foisting a lie upon us? With due respect for his undoubted genius, was Ansel Adams manipulating the truth when he took a light blue sky and turned it jet black with a red filter? Certainly it made for a better picture—a masterpiece by an undoubted master. But was it the truth? 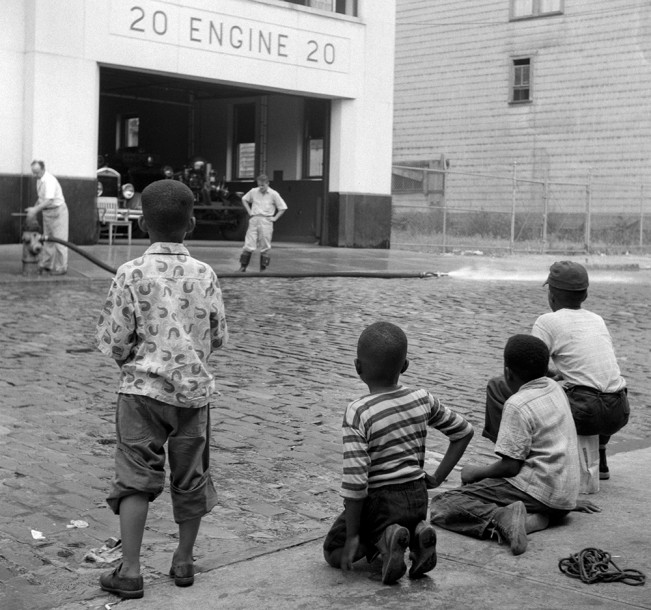 For me, what unites these two sides of the coin is the underlying need behind the photographers quest. We take pictures to record history. We take pictures to capture an aesthetic that we find pleasing, a sunset or a pretty flower.But what underlies all of these is a need to reveal a truth –to extract from the minutes of our lives an awareness, an understanding of something that is greater than ourselves. When we look at a picture of a pretty flower, when the photographer is successful, he or she helps us see the perfection in nature, the inexpressible beauty that was created by something we cannot name. When we look at a picture of a screaming child who has just been hit by Napalm, we see the truth of war, lives torn asunder by excruciating pain and fear. Maybe the viewer will become an advocate for peace and attempt to change our world in the ways that he or she knows how. Isn’t this what life is all about, what makes it worth living? We all need more than bread for a complete life. We need meaning and truth and a connection to the world beyond our own bodies. 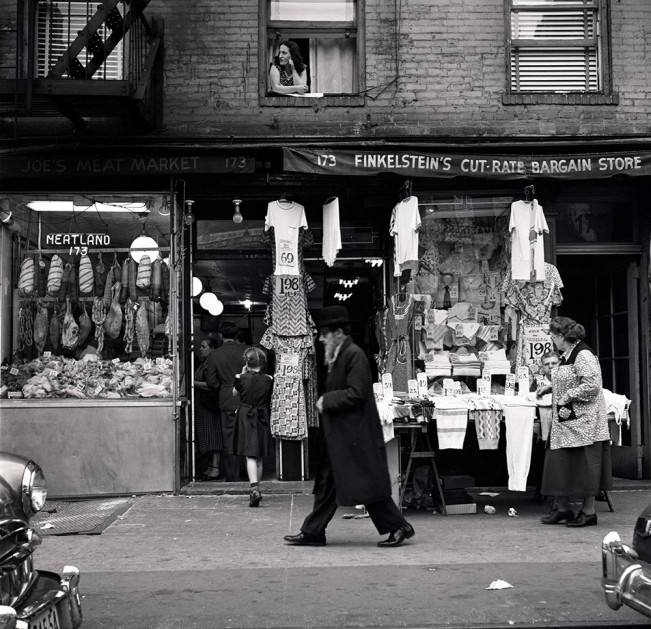 For me that connection comes with a camera. The simple answer to why I take pictures is that it makes me happy, gives me a deep and lasting satisfaction, and engages all my skills, training and the innate talent I possess. The Declaration of Independence says we have certain rights, among them: life, liberty, and the pursuit of happiness. And I surely am pursuing happiness with my camera. When I take pictures of children, I’m not trying to capture their cuteness or emerging beauty. I seek to capture the essence of childhood; I see the child as a chrysalis of a future adult. In their childhood innocence they are unaware of danger but filled with the curiosity of discovery and, like me, the photographer, they also pursue happiness. In their case, the pursuit is unconscious. In my case it is with the full knowledge that it is the pursuit itself, and not the reward, which engages my senses and intellect. 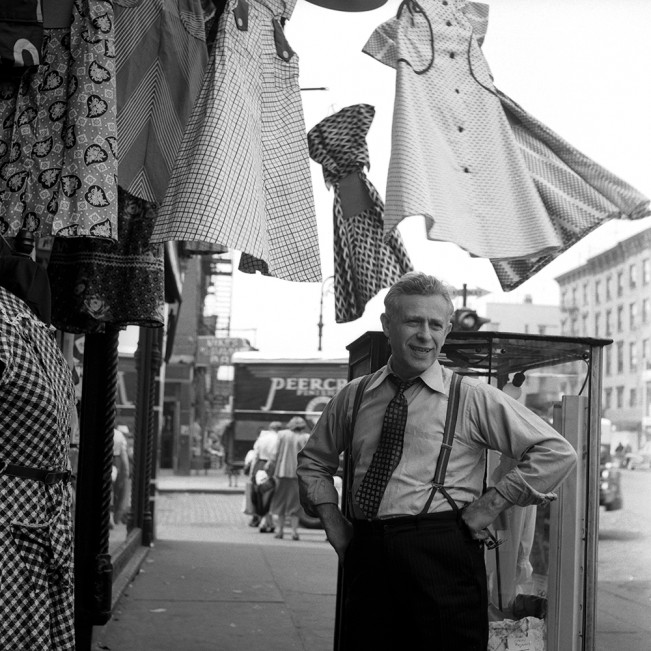 But the deeper reason I take photographs is I am on a search for my own truth. Voltaire’s hero, Candide, goes through life seeking and telling truth to all who ask. So I suppose I am a Candide-ian, a candid cameraman, also seeking the truth, but with a camera. In my photographs, I try to simplify a complex visual world. I try to find in a moment its essence, very much like the poet does with words. But while my photographs appear simple, they are the product of my lifelong training as an artist and my love of a story. I see life as a series of meshed, ongoing stories, all happening at once, a cacophony of existence, glorious and ignoble, repeated and interconnected. Like a magician doing card tricks, the images flash by in an endless array. It is my task to isolate that one moment, to capture that essence when I snap the shutter. When I succeed, I have created something that reaches beyond the paper it was printed on, something greater than the sum of its parts. I have created art. 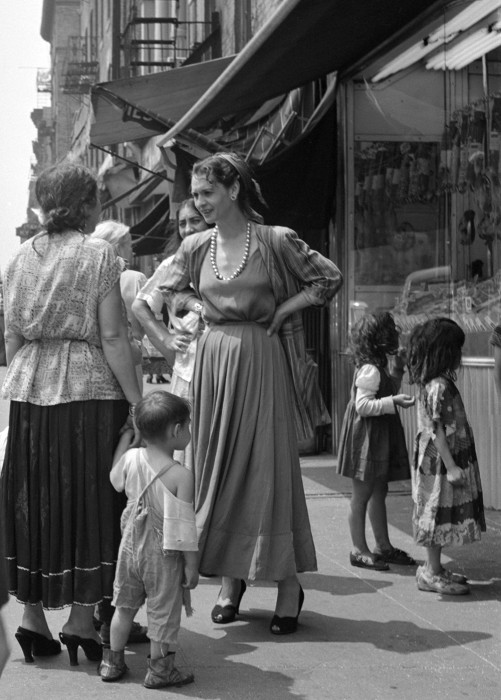 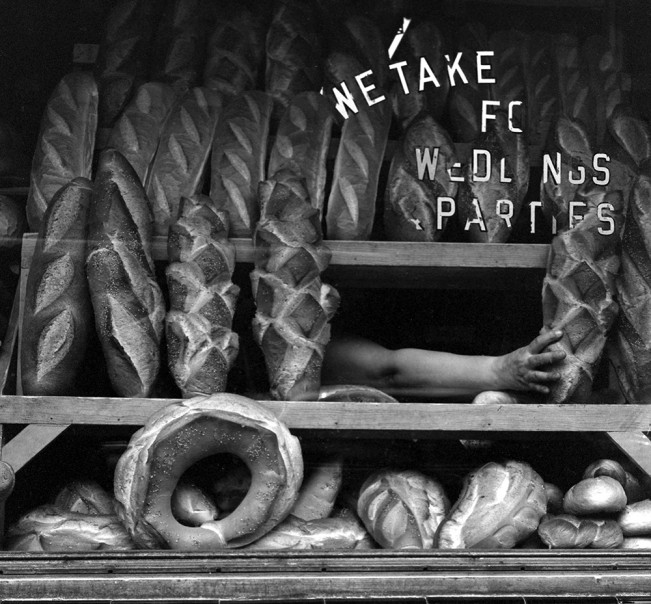 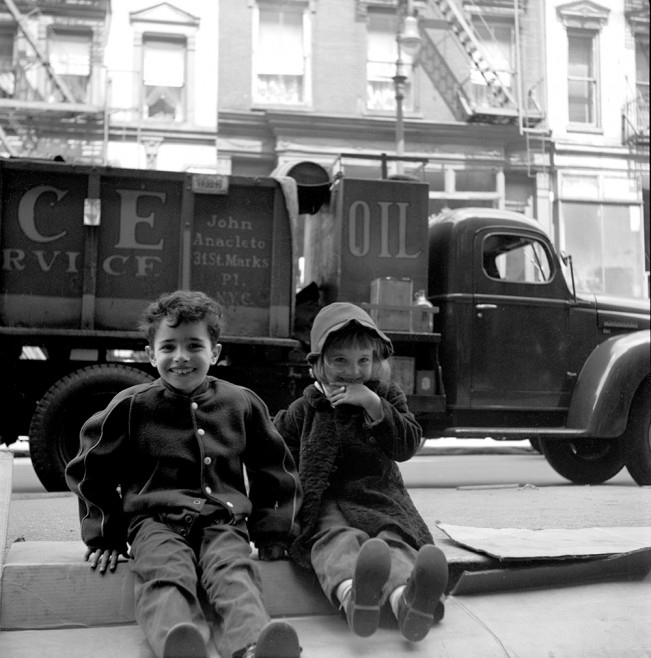 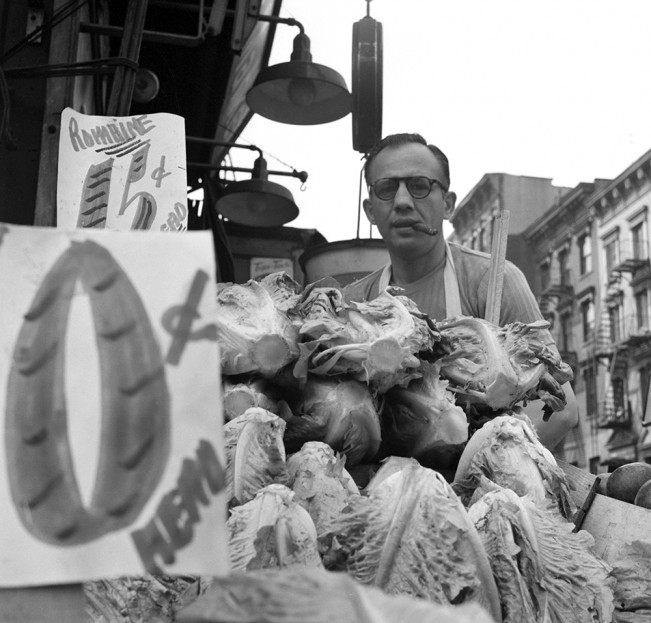 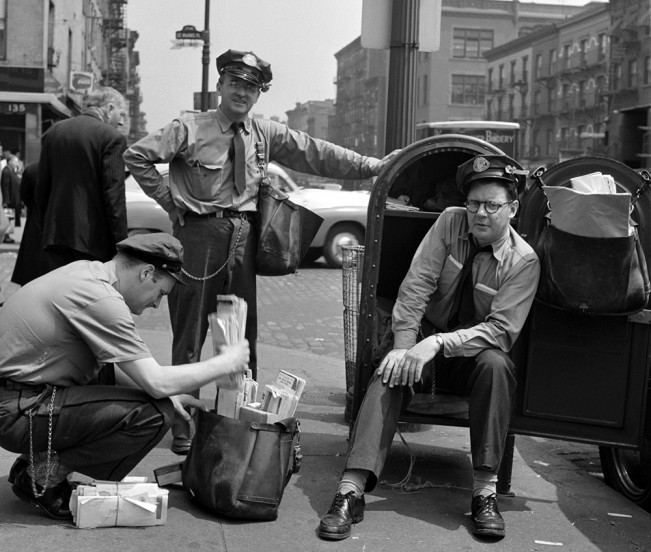 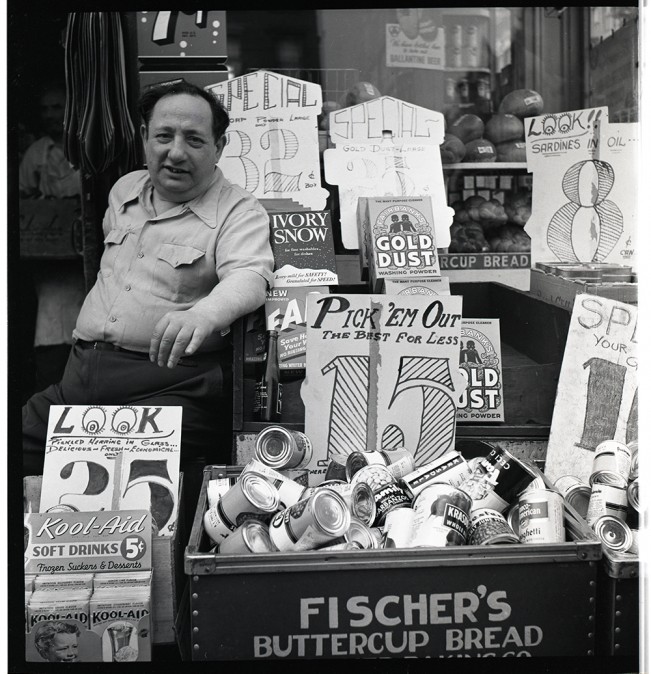 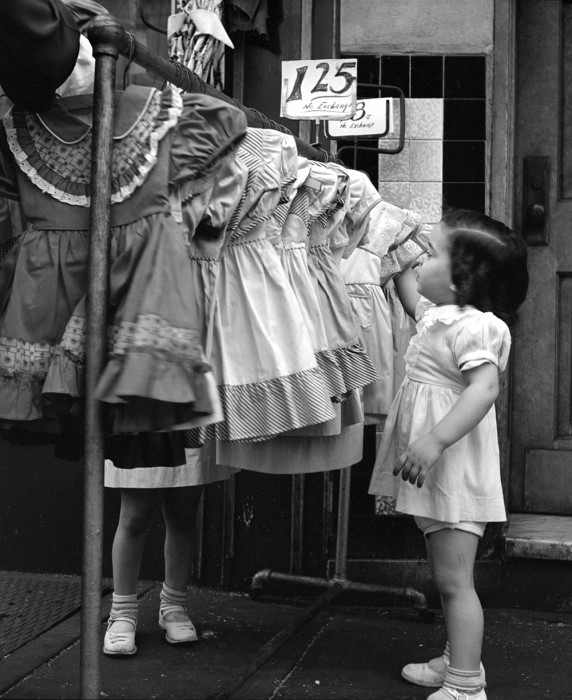 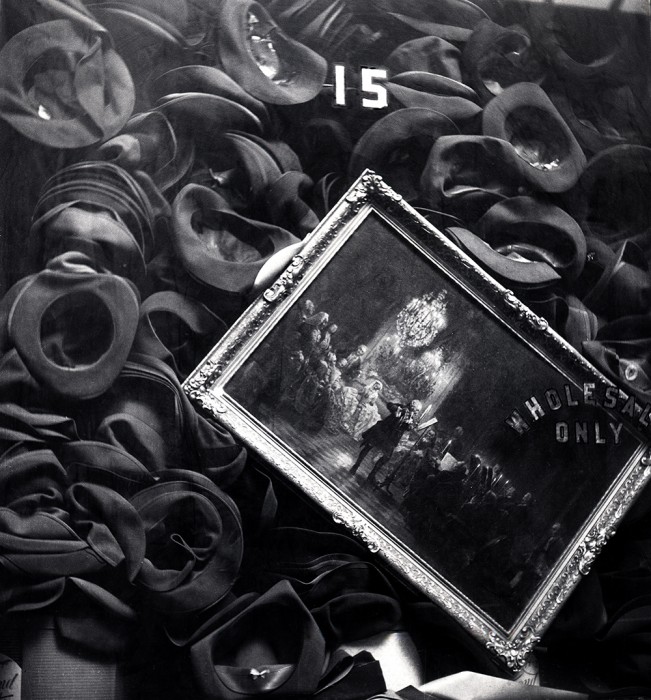 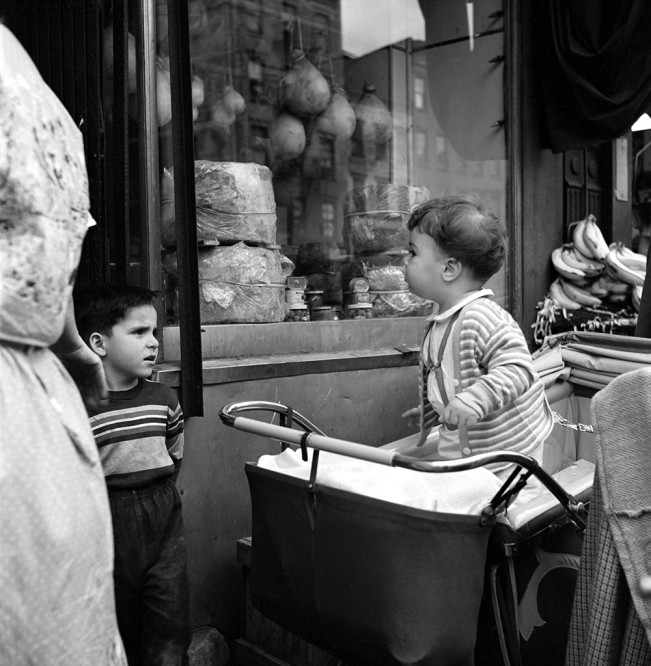