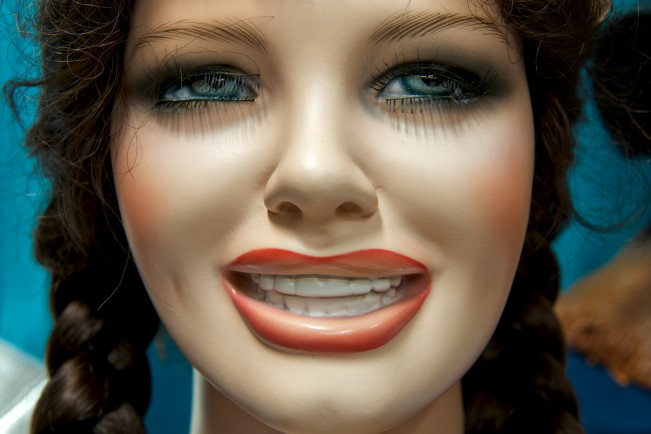 Photographer Neal Rantoul has taken his work into a new direction, exploring the world of costumes and make-believe with his most recent project Monsters. Monsters will be included in the exhibition Wild Things (along with video artist, Tamara Al-Mashouk, and painter, MA-Zing) at the 555 Gallery in Boston. The exhibition runs from September 10 to October 17 with an Artist Reception September 12, 6 – 8 PM. This series sprung from a chance encounter with a Halloween store, where he returned to capture various states of gore and beauty.

Neal Rantoul is a career artist and teacher who has taught photography since 1971. He is an emeritus professor and was head of the Photography Program at Northeastern University for thirty years and taught for thirteen years at Harvard University as well. He retired from Northeastern in January 2012. Neal has worked in numerous public and private collections, including the Museum of Fine Arts (Boston); the DeCordova Sculpture Museum and Sculpture Park (Lincoln, MA); the Fogg Art Museum (Cambridge, MA); the High Museum (Atlanta, GA); the Kunsthaus (Zurich, Switzerland); the Center for Creative Photography (Tucson, AZ); and Princeton University (NJ). He is the recipient of many awards and grants, including a Whiting Foundation Fellowship; a Lightwork residency (Syracuse, NY); RSDF, FDP and IDF grants from Northeastern University, a residency in Hofsos, Iceland in 2013; and he was a finalist twice for the Massachusetts Cultural Council award. Neal was an active member of the Board of Directors of the Photographic Resource Center for six years, serving on its Executive Committee for three years and is on the Board of Corporators at the Griffin Museum of Photography.

Since retiring Neal has been teaching workshops, traveling, publishing and making new work. In the spring of 2013 he had simultaneous shows of new landscape work at the Danforth Museum in Framingham and at Panopticon Gallery in Boston. A new book of his writing on his own and others’ photography called Neal Rantoul, Essays on Photography is soon to be released. 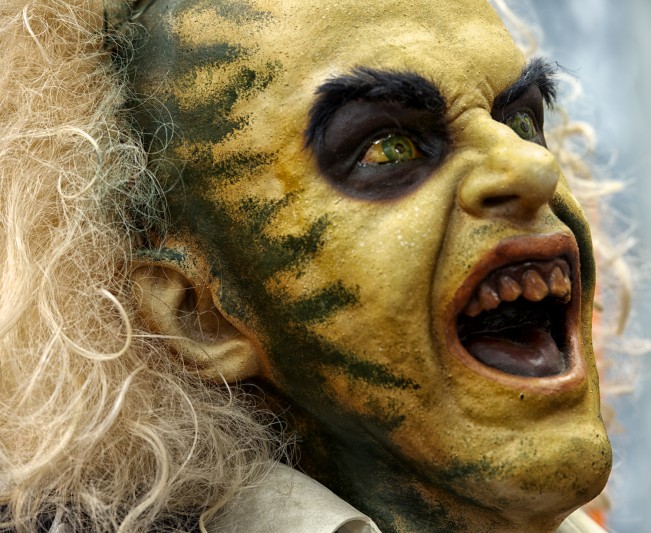 As I write this in July 2015, I am heavily immersed in the printing of the photographs for the show at 555 Gallery that has my pictures in it called Monsters that opens in mid-September. Printing for a show like this is practically a single-minded effort that requires focus and blocking out distractions as much as possible. While I made these pictures in 2014, this is the first time they’ve been printed and shown.

Thanks to the wonderful essay by Alison Nordstrom in the catalog we have the necessary perspective placed on the work and she has contextualized it for us as well. I am thankful to her for providing that which I can’t. But I can attempt in this statement to bring you into the work and speak to motivation and intention. As far as success or the final result goes, I will leave that up to you. 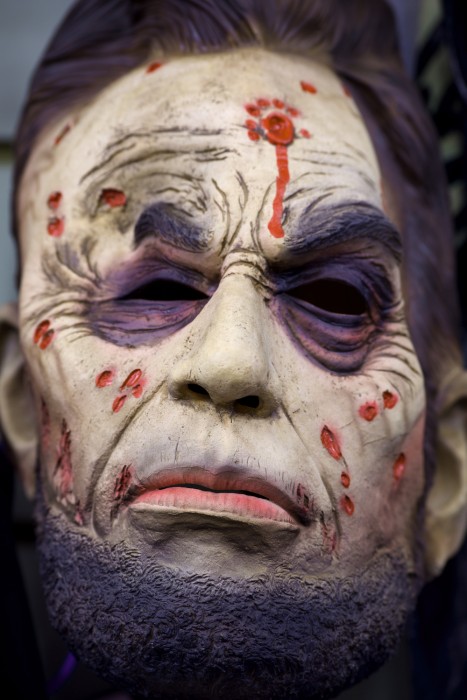 On a gray and cold day in early winter, I drove to Fitchburg MA to make a presentation of my work to the new head of the Fitchburg Art Museum. We had a great time and looked at several portfolios. I left thinking that that the meeting had gone well, and on the way out of town saw on my left a sign on top of a long, low building that said, “Halloween Costume World.” I pulled over, parked and went in. Inside was quite dark and cold with aisle after aisle of all sorts of things. Halloween costumes for children and adults in plastic envelopes with pictures of models wearing what was contained within. A mask wall with what looked to be hundreds of latex masks stuck on sticks from floor to ceiling. A section of mannequins dressed in odd juxtapositions of monsters and tableaus of scenes like three of the major characters in the Wizard of Oz. And finally, in another huge room with no light and no heat at all, an odd storage area that included rentable full size models of Beetlejuice and a somewhat broken Frankenstein, assorted gory and macabre scenes of beheadings, the green Wicked Witch of the West, torture and executions, a wig wall filled with hundreds of all styles of inexpensive wigs placed on plastic head forms of amazing variety and so on. I was the only customer in the store that day. I walked right up to the man behind the desk and asked him if I could come back to take pictures. He said, “Yes, of course.” While the visit to present my work to the Fitchburg Museum turned out to be a complete waste of my time, the visit to Halloween Costume World did not. I had a new project. 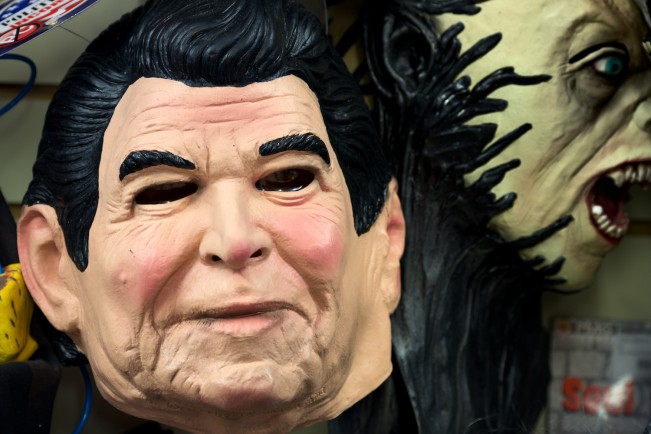 Over the next several months, I returned many times to the store. The routine became familiar to me and the staff in the store. I would arrive, ask them if they’d mind turning the lights on, haul in tripod and photo gear, set up and start to photograph. Each time I’d think I was finished after a few hours, but when looking at the work made, realized I needed to go back to reshoot.

Working on a project like this, where the subject stays the same, is as much a discovery for the artist as it is for the viewer of the work. I learned this ten years ago when working on making pictures from the Mutter Museum in Philadelphia. The specimens weren’t going anywhere, but it was up to me to discover and apply my own imprint. 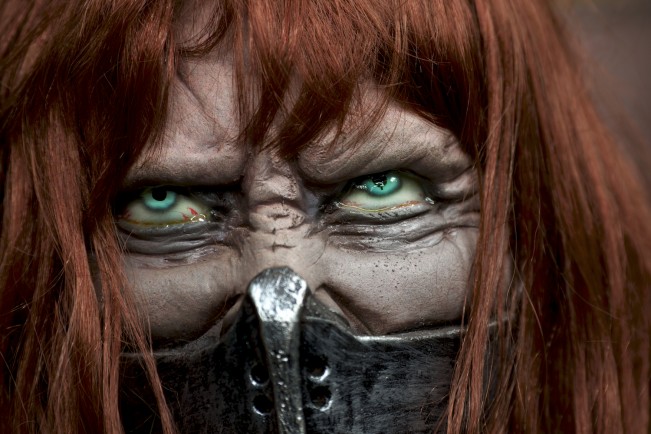 So, I worked, trying different approaches each time I went. By five or six trips photographing in the store, about an hour from where I live, I felt the work was getting redundant. So I stopped. By this time, I understood that I had unearthed something a little more substantial than the pictures just being shocking, atypical, funny, or quirky. I found I was attributing personalities to these masks and head forms and mannequins. This started to show itself in nicknames for some of the characters. The three models shown side by side in the show are known as “Neal’s Passion” as they are very lovely and make me think of my youth. The large print of the vertical model with the surrounding dark hair is now “Mona”. Then there is “Dorothy” in several parts and interpretations. The side-by-side models with unbelievable lips are called “Pouty”, and finally, the large print of the smashed mask is simply called “Jack.” 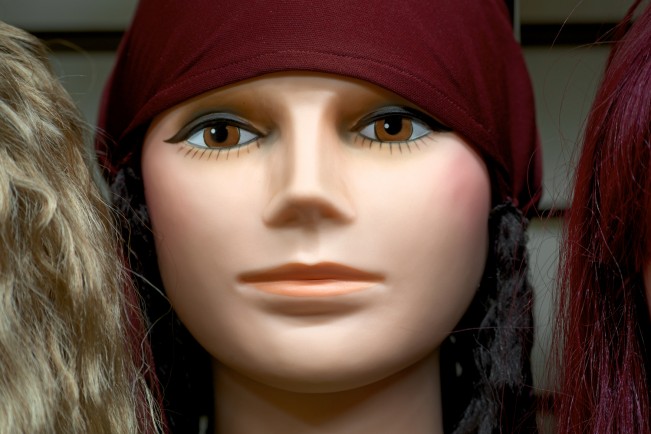 What began as an experiment in new seeing had now become, surprise, meaningful. Little did I know. I thought when I started I had a hold of something that would entertain, be colorful and maybe titillate. What I found was that I had photographed something that, I believe, struck a more primal note. That what our genetics and our ancient brains do to these faces and the over-the-top expressions molded into these odd things is to identify with them, to seek to form relationships with them, to, essentially, attribute personality to latex, plastic and fiberglass. This, I predict, is a path for human civilization to deal with if we survive, if we don’t blow ourselves up or contaminate where we live. Movies like Chappy, Ex Machina and Her all wrestle with our future relationship with machines we make in our image. Interesting times indeed. 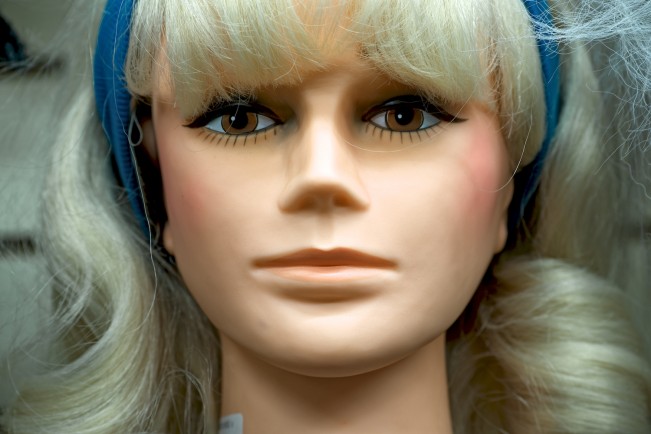 In my own small way, I too am moving ahead. My classmate and colleague, Arno Minkkenin says that “Art is risk made visible”, and, while perhaps an over-simplification, it certainly seems to apply here. As a career artist, I have made a leap with this work, taken some risk, to delve deeper into an area I have been wrestling with for ten years. What do we know about us from preserved forensic specimens? Or in the case of my Cabelas work, what do we learn from photographs of stuffed animals posed in situ in a large sports outfitting store? And finally, what can we assimilate about ourselves from the caricatures we make in our own image? These monsters in all their cheap and gaudy representation of the human condition, in all their gross exaggeration of much that is abhorrent about us as a race, can also be strangely beautiful and unsettling. Dichotomies are fascinating. Enigmas provoke and pose questions that hopefully go beyond $14.95 wigs and $29.95 latex Halloween masks.

Welcome to my world of Monsters. 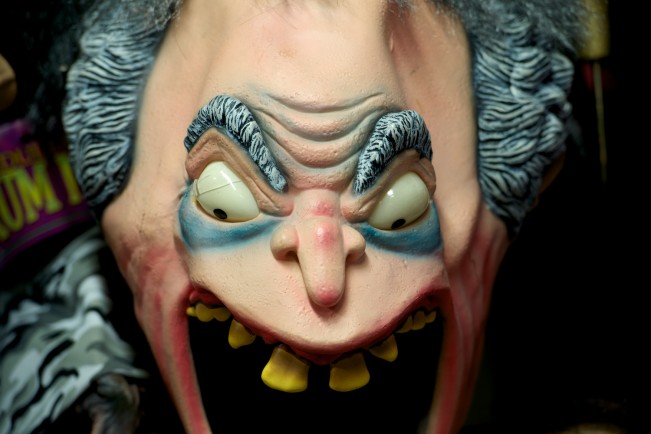 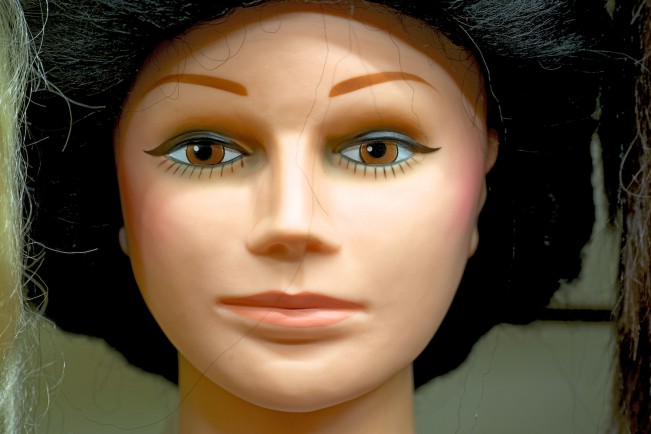 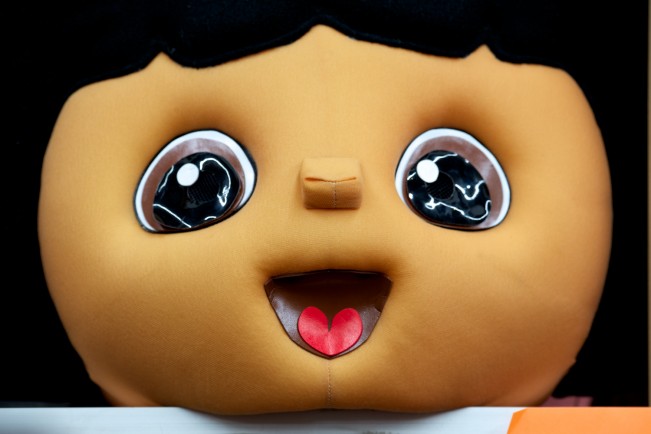 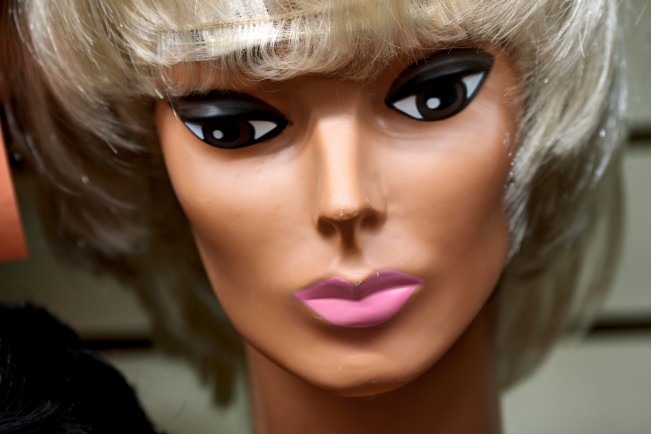 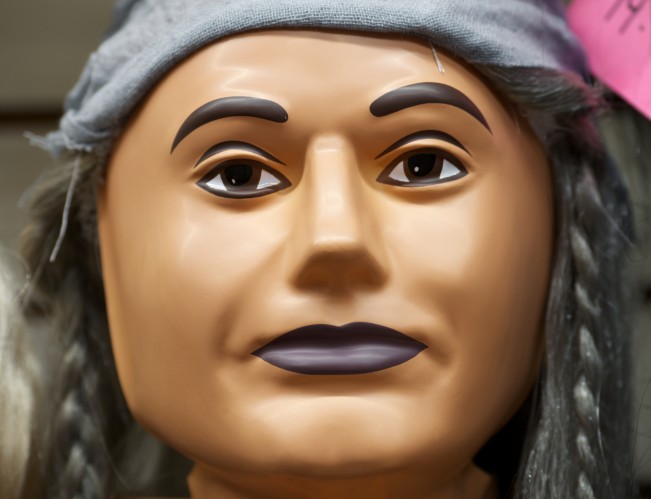 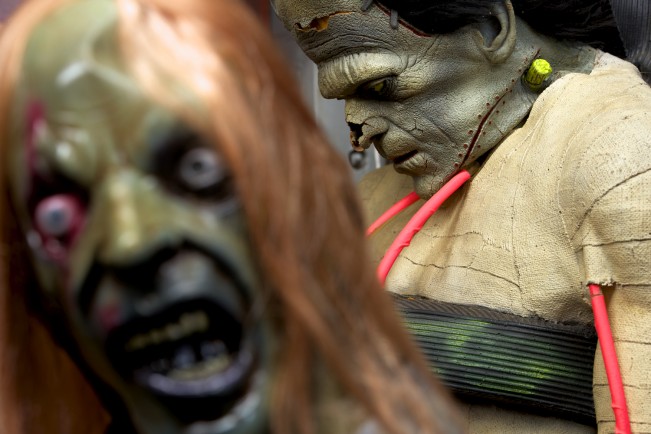 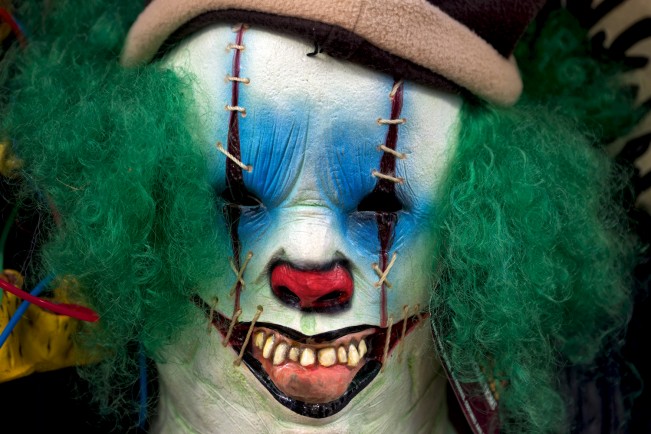 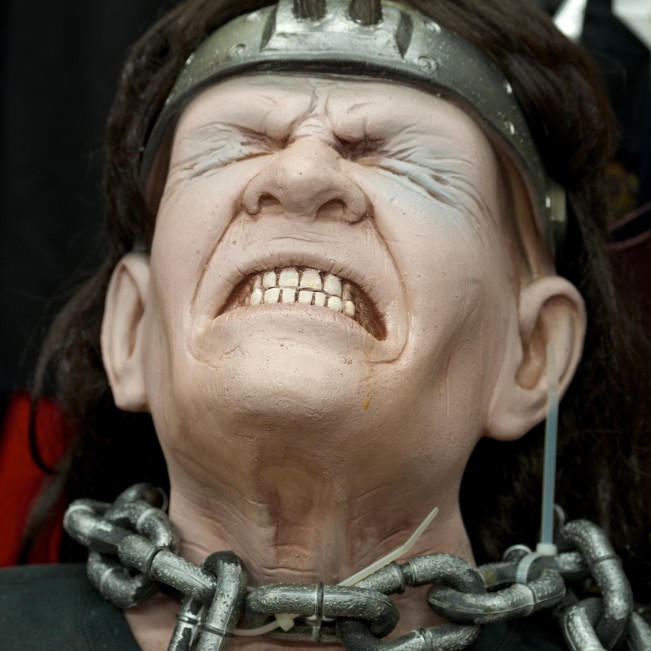 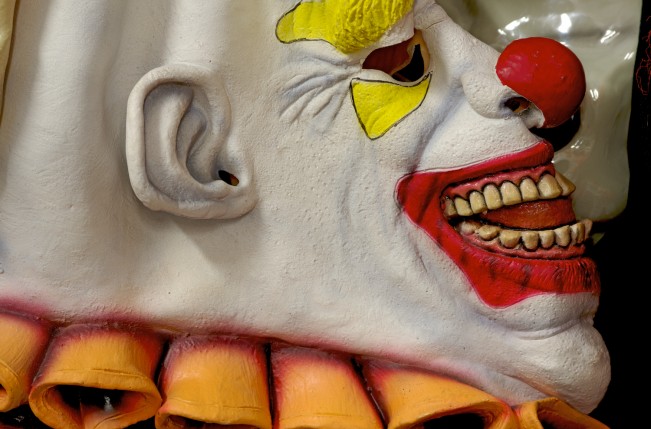 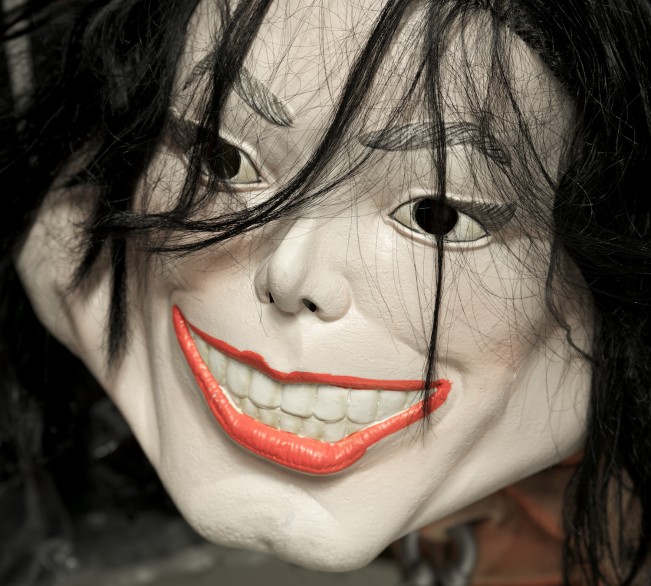 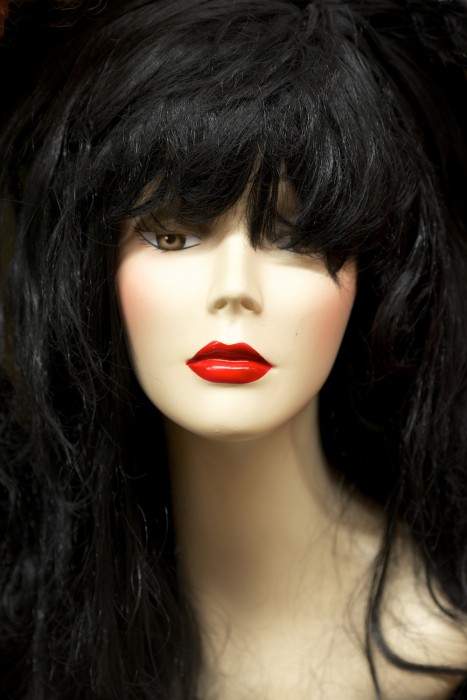