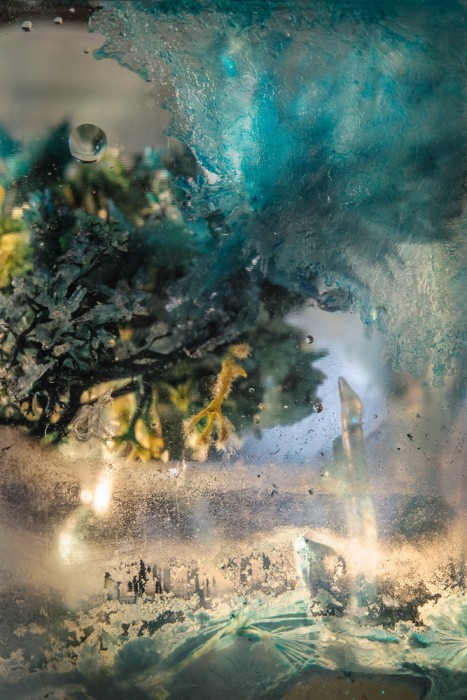 It was terrific to finally meet Liz Hickok at Photolucida. I have been a long time fan of her amazing and massive jello constructions of San Francisco and New York, like the one below. 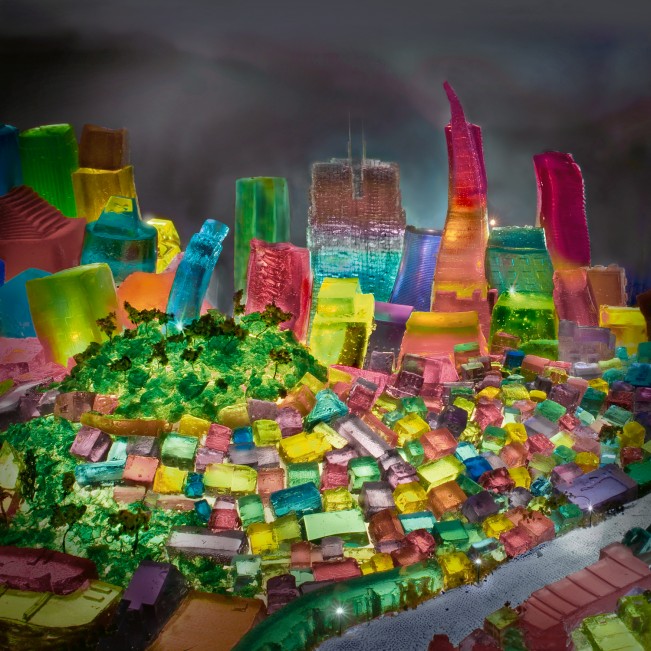 Liz has two new projects, Ground Waters and Sets and Tests that continue her investigation of construction and deterioration, this time using crystal formations. The results are other-worldly and delicate, with a fragile beauty that belies their humble beginnings.

Liz has several exhibitions this Fall. Her work is currently on exhibition at the wall space Gallery in Santa Barbara through October 31st, with an artist’s talk on Saturday, September 12th at 2.30-4pm. Her photographs will also be included in a group show, Botanica: All things Plant Life at the Bedford Gallery in Walnut Creek, CA running from July 12-Sept 16th, which includes one of her time-lapse videos. A selection of her Jell-O photographs will be exhibited at the Napa Valley Museum called Nourish from September 18th through November 29th. She has a public art mural up in Denver at 3357 Downing St., Denver, Co.

Liz received her MFA from Mills College in Oakland, California. She earned a BFA and BA from the School of the Museum of Fine Arts and Tufts University in Boston, Massachusetts. Hickok’s Fugitive Topography, Cityscapes in Jell-O series has become a popular subject of media coverage, including articles in The New York Times, Harper’s, the cover of Artweek, and features on the CBS Early Show, Spark Bay Area, All Things Considered, Talk of the Nation, and the Food Network. Her artwork has been exhibited across the country and is included in art collections such as the Museum of Fine Arts, Houston and UCSF Mission Bay Hospitals. Hickok is currently showing a new public, large-scale photo mural in Denver, Colorado, and has work on view at wall space Gallery in Santa Barbara, CA. 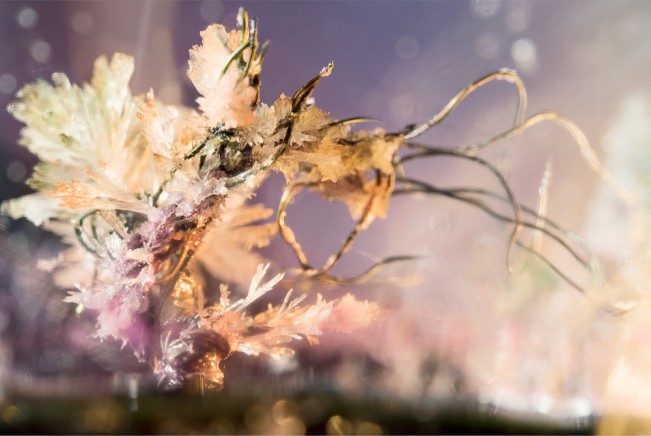 I use ephemeral materials to create sculpture that is fleeting in nature, and I document the journey of experimentation, construction, and deterioration with photography and video. With these combined media, I can remove any sense of the sculpture’s original scale, presenting as life-sized, or larger, a piece that might be only inches in height. The effect is an otherworldly space in which viewers can immerse themselves.

In my Ground Waters series, I create miniature scenes in which natural and urban environments are overgrown with crystal formations. While the sculptures’ colors are pleasing and inviting, the sharp formations are clearly chemical in nature, referencing the pollutants that seep into, even saturate, our environment. I photograph the structures’ transformation, creating time-lapse videos for presentation together with my still images. I also execute large-scale site-specific works in public spaces, enabling me to manipulate—even further—¬the perceived scale of my sculptures. 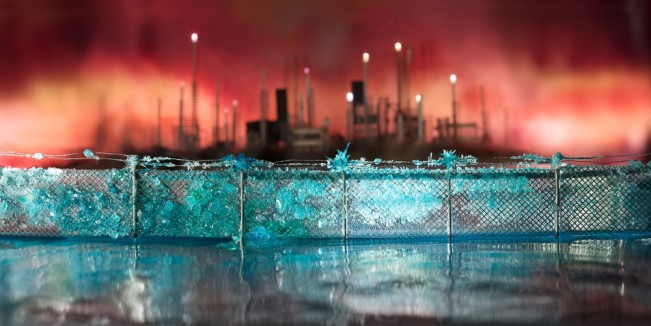 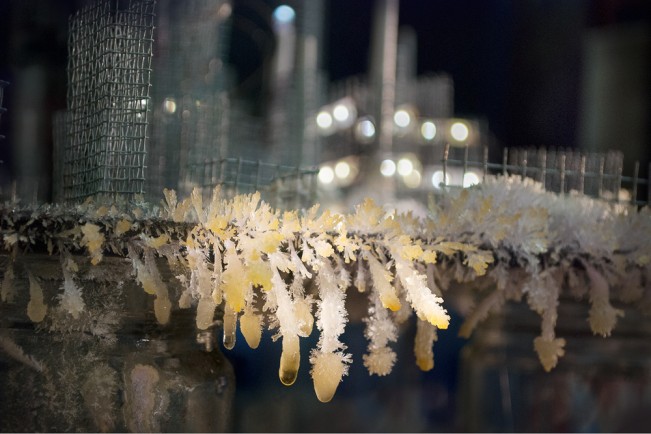 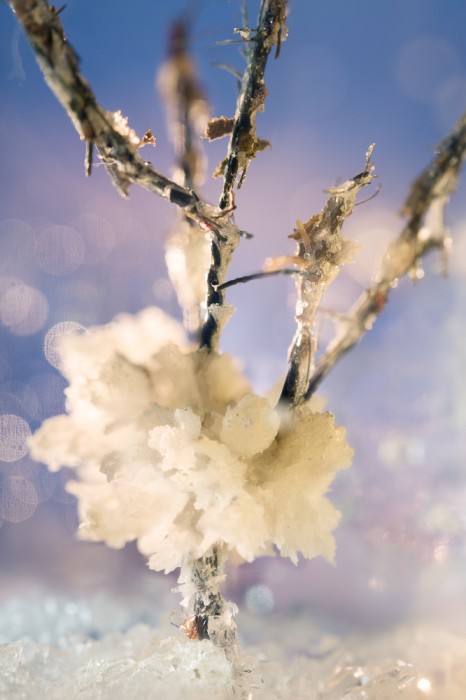 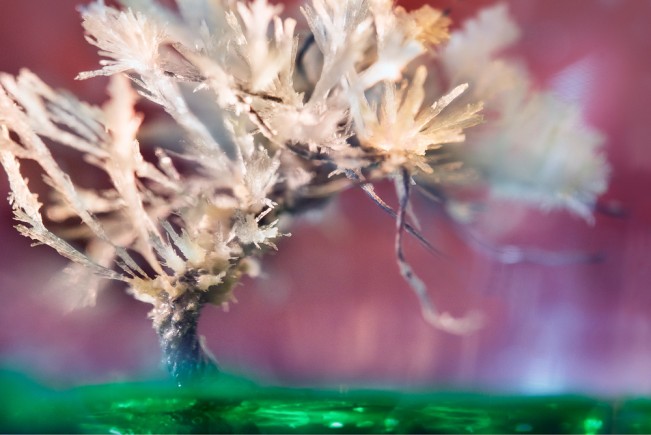 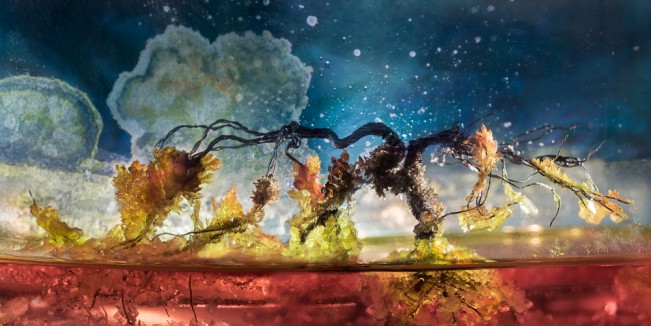 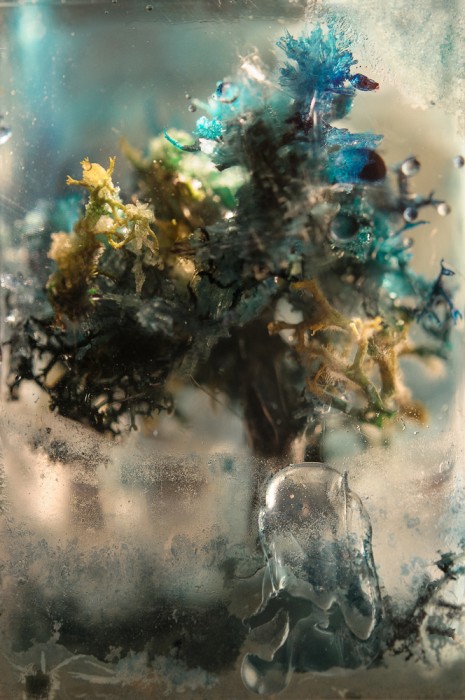 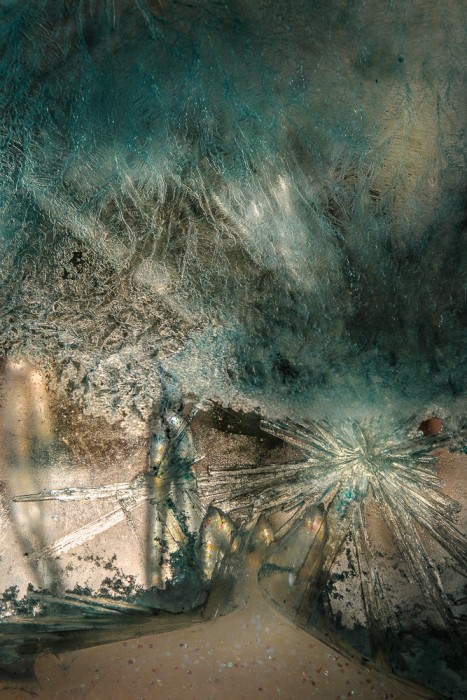 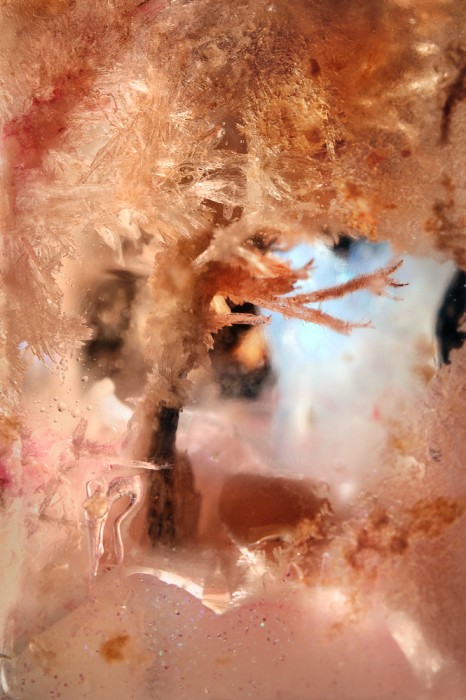 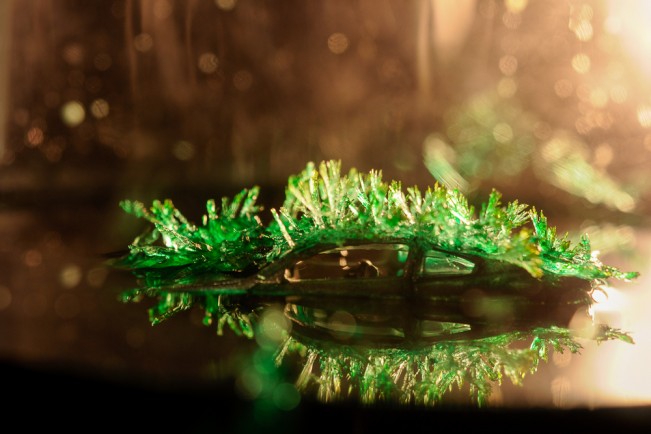 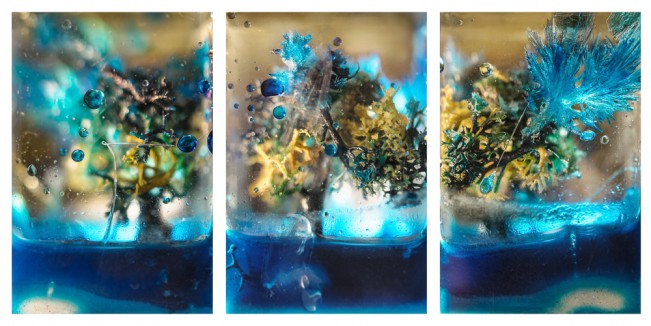 In a parallel body of work, Sets & Tests, I photograph the sets, props, and experiments that appear in my constructed environments. Against a simple white background and printed at a large scale, the components can be explored in detail—and in stark contrast to the color-saturated, luminous, and sometimes chaotic scenes that they formed. 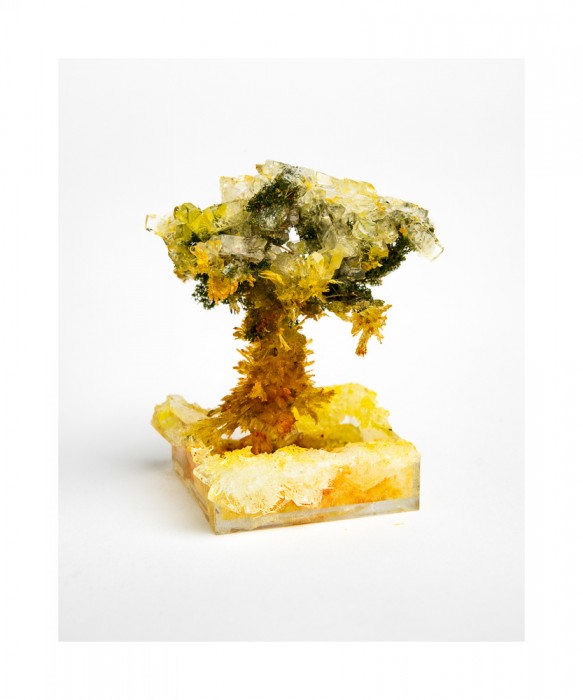 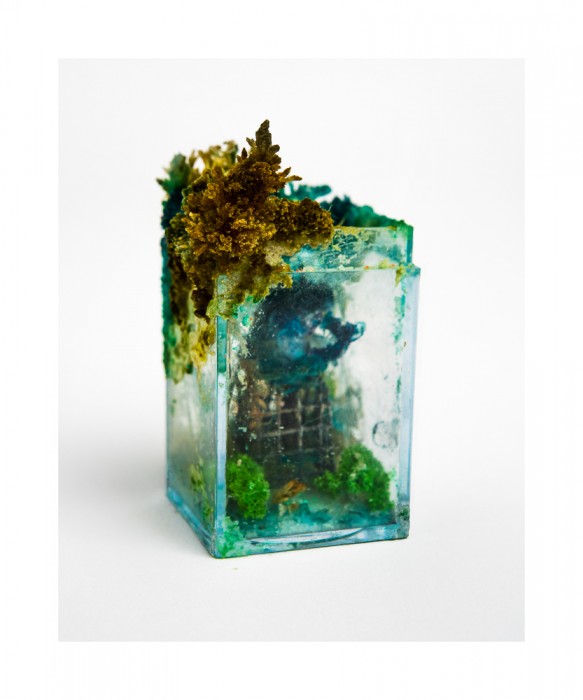 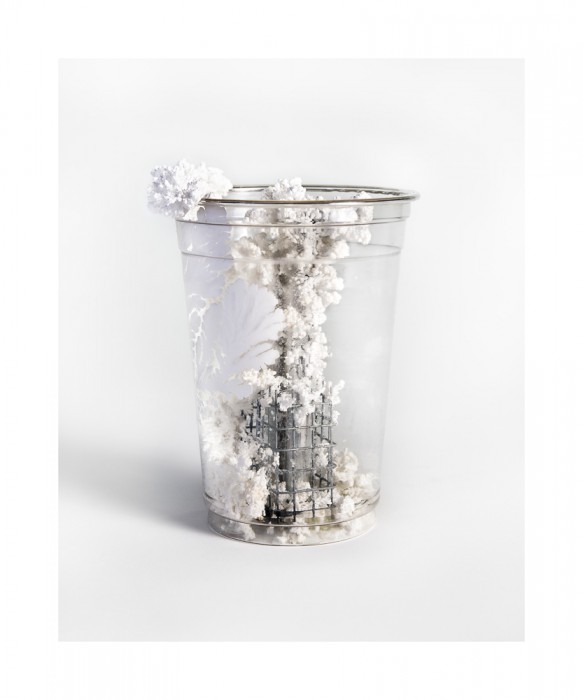 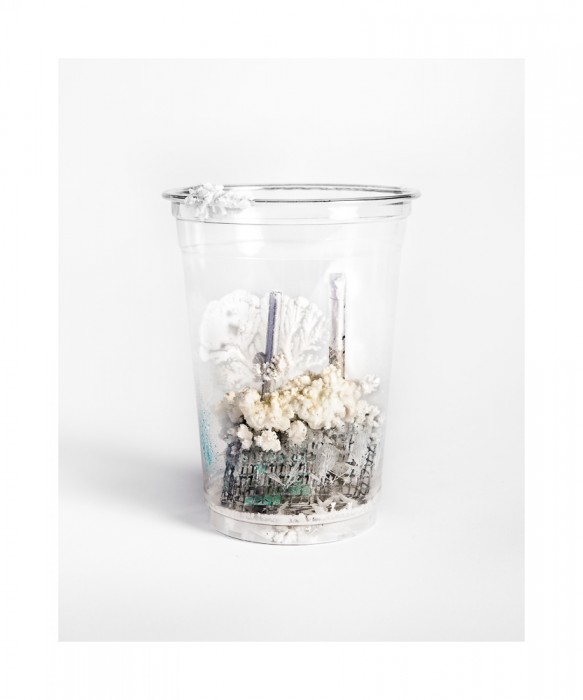 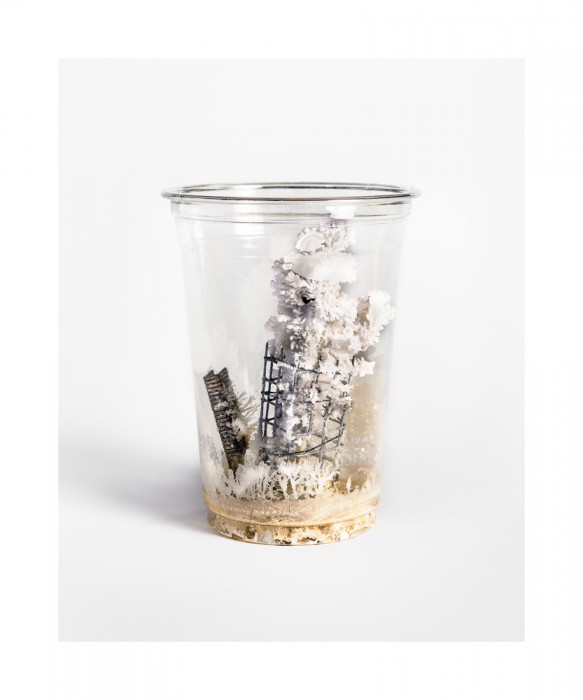