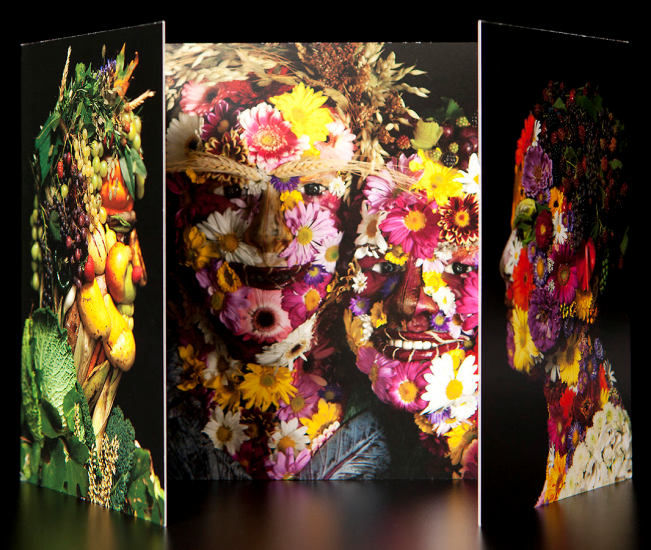 It’s a pretty rare event when a photographer gets an e-mail out of the blue from a very significant figure in the artworld, asking said photographer for a commissioned piece.  Said photographer happens to be Klaus Enrique, known for his stunning still life portrait compositions. I asked Klaus to share the story of this unique commission for a Holiday Card….

“Do you do private commissions?” read an email I received in April 2014. I had never heard of Peter and Gwen Norton, but they were interested in having their portraits done by me in the style of Arcimboldo. “Yes, this is definitely something that I do,” was my slightly awkward reply. “When would be a good time for you to come by and meet the Nortons?” asked the next email.

The following Friday, on a beautiful New York spring morning, I put on my best suit and I walked my way across Chelsea from my studio on 8th Avenue to the Norton’s penthouse on 13th & 6th, making sure I did not walk too fast so as to not break a sweat. I was greeted by Carolyn, Peter Norton’s assistant, and I was asked to wait in their living room. Art hung from every wall, but there was no air of pretentiousness about it. It was simply somebody’s home that just happened to be full of art that would put a lot of museum collections to shame. 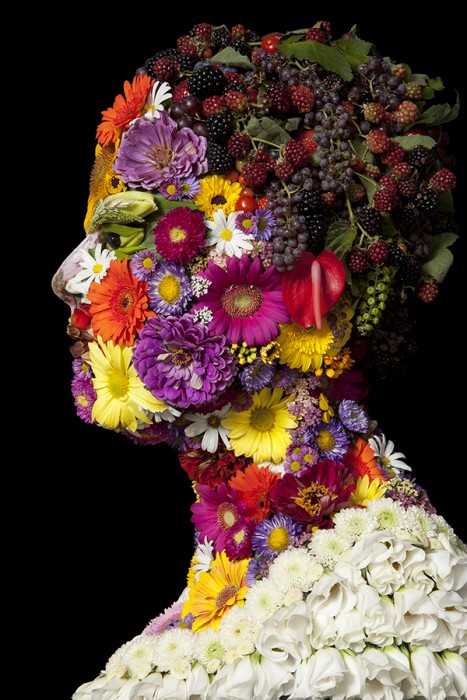 I still did not know who the Nortons were, but when Peter walked into the room, said “good morning” and asked me if I wanted some coffee, I knew that I should have done my research. A few people have that rare trait of carrying themselves simultaneously very lightly and yet there is this great heaviness about them. Peter Norton is one such man. He told me he wanted his portraits done for a Christmas card he was going to send out. I was immediately concerned: “we don’t have much time then,” I said. “Oh, it is not for this year. I already have the artwork for this Christmas. It is for 2015” Peter informed me. “Would you like to see the previous cards I have sent?” He asked me, and with jovial pride Peter proceeded to show me all the cards he has commissioned since 1988. I was not just being paid to make a Christmas card. It was an honor.

We spoke about costs, and about each portrait. “So, for the three portraits,” he began… “It is four,” I interrupted, “the double portrait counts for two.” “OK, how much?” I suggested a price and asked to retain the copyright and the ability to sell the images as art, as I do with all my other pieces. Peter turned to Gwen and with a smile he asked, “Would you mind having your portrait hanging in a gallery wall?” “I don’t,” Gwen smiled back. “Do you need a contract, or will a handshake do?” he asked me. “A handshake would be great,” and in a moment, I was shaking his big, manly hand. 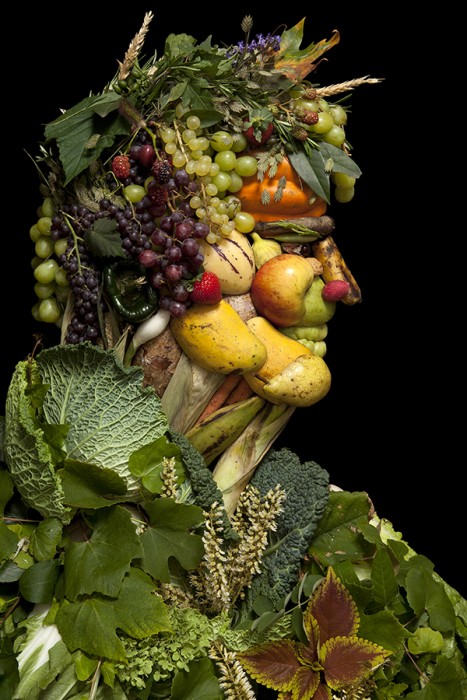 I rushed home filled with excitement. I googled Peter Norton, and read in his Wikipedia entry that he had started his software business with “$30,000 and an IBM computer.” I read the New York Times article that talks about his Christmas Project and the various artist that have worked with Peter. The excitement soon turned into dread. The recipients of the card, “3,800 of closest friends,” were not a random group of people. As the Times said, “Come Christmas, it isn’t only children who worry whether Santa will deem them naughty or nice… for many in the art world, the most important is the Peter Norton Christmas Project.”

In my meeting with Peter, he had asked to have a creative input into the project. I did not get a chance to reply, “You just rolled your eyes,” he said, looking intently at me. Age 70, his still does not miss a thing. “My creations look like fruit salad all the way up until the point when they don’t,” I explained, “so you may be looking at something that is almost done, and it still looks like crap.” He paused for a second and then said “OK, so it will have to be a thumbs up or thumbs down then,” he said. I agreed, “… and if it is a thumbs down, I will just do it again.”

I thought about the project for a few months. I started working on Peter’s first at the end of July. I worked on it for days almost non-stop, or rather for nights, since I prefer working at night, and going to bed once the sun is up and the City is back in full swing, the traffic on 8th Avenue getting steadily thicker with cabs and trucks. On August 1st, the piece was almost done, but I still had to work all through the night to get it right. Just before 7:00 AM I was ready to send a photo to Peter. “Oh, my, how wonderful. — P,” was the reply I got. By this point, I knew Peter’s emails were very brief but conveyed everything he wanted to say. A quality I have yet to acquire.

I began working on Gwen’s portrait immediately after. Two weeks later, it was ready. It was also a thumbs up.

Summer ended, and I realized I was stuck. Walking on the Pines pier in Fire Island I told my friend, Bobby, I had the sculptors equivalent of writers block. I wanted the final double portrait to be in sharp contrast to the very formal individual portraits. I wanted them to say Arcimboldo, but I also wanted them to say Klaus Enrique, and above all, I wanted them to say Peter & Gwen. Gwen has this amazingly radiant smile. Peter’s is cheeky. And it is obvious, they love each other very much… 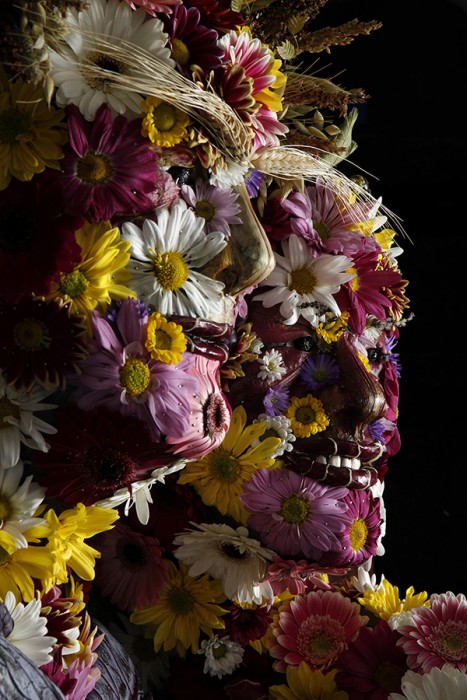 Fall came and went. Peter touched based with me to see how I was progressing, and I still did not have anything to show. “I have been thinking about your final piece quite a lot. To be honest, I am quite intimidated by it.” I wrote, and I was not lying. I had stopped working on everything else to concentrate on the final piece. I had not produced any new work in months, and I had not kept up in touch with my collectors. I had started to run out of money.

It was not until December that I began to figure out what to do. Peter was going to be made out of flowers and Gwen out of leaves. The flowers come from the Flower District, and flowers are not cheap! When the portrait was finished, it looked OK, but Gwen looked too much like Mystique from the X-Men. I had to start from scratch. “Why not make Gwen out of fruit and reverse their materials from the formal portraits?” I thought, and without a second thought, I began destroying the bust that I had built for Gwen out of clay, in order to give space to the fruits that were going to occupy its place. Only a few hours later I was going to regret doing that a lot. Sculpting with fruits is very difficult. The dimensions of every fruit are determined by every other fruit in the portrait, and by the whole dimensions of the portrait as well. But in this case the second portrait, that of Peter, was a third constraining factor. It became clear very quickly that I was not going to find fruits small enough to match Peter’s portrait. I needed the clay portrait that had taken me weeks to make and that I had just destroyed. In two days I was able to remake the bust. But by then, the flowers on Peter’s portrait were dead. I had to check how much money I had left, and my stomach sank when I realized I did not have enough money to finish the sculpture. I called my sister in Mexico, and I explained the situation. My sister works in the Mexico City Zoo enriching the lives of the animals there. She loves her job, and in particular the elephants, but it does not pay much. She wired $1,000. That was all the money in her bank account.

At 4:30 the next morning I was on 28th Street buying flowers. Two days later, my most ambitious (double) portrait was done. I was delighted with it. It was exactly what I wanted it to be. I email Peter giddy with excitement. An hour later his reply came back. It was a thumbs down.

Peter promised me he would give me some feedback. As the days went on, the flowers on both him and Gwen wilted. Two weeks later Peter’s email arrived. It is an email I will frame.

In those two weeks, I had gone a little bit crazy, wondering why Peter had not seen what I had seen. Reading his email, I realized that he had: “On the whole these are terrific, and I particularly like the contrast between the formality of the individual profile portraits, from before, and the warmth and intimacy of the paired portrait.” He proceeded to explain that the blob of petals that I had given him for a nose was not particularly human looking (which indeed was the case), and that Gwen’s teeth had been too prominent (which they also were).

There was a moment of peace after reading his kindly worded email… Of course, he understood.

I called my best friend, Hasan, in London and I told him I had to borrow a thousand dollars to make the new sculpture, that would be equally as bright and intimate, but would have slightly more defined noses and Gwen’s teeth would be just right. A day later, the money was in my bank account. And a few days later, a new sculpture was ready.

“Lovely. We both find it wonderful. Consider it finished! –P” 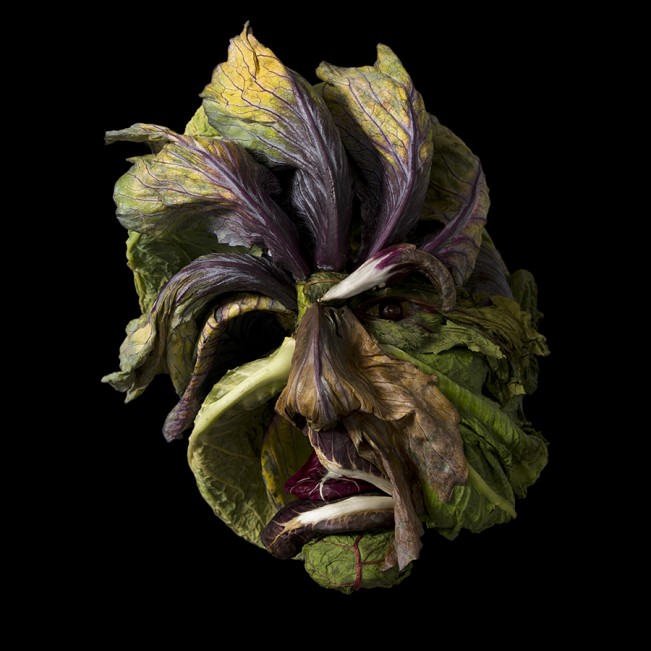 ©Klaus Enrique, Study for a Portrait of Francis Bacon I 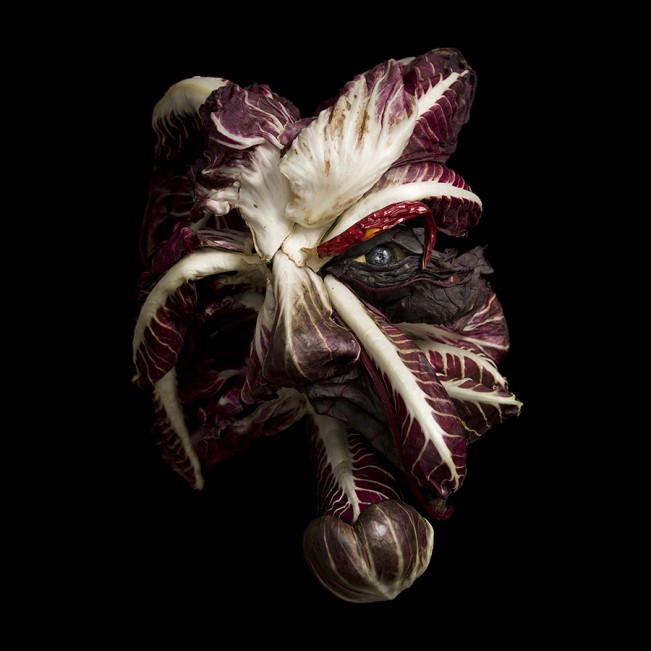 ©Klaus Enrique, Study for a Portrait of Francis Bacon IV

NEXT | Stephanie Jarstad : The Twelve Beards of Christmas >
< Kay Lynn Deveney: All You Can Lose is Your Heart | PREV