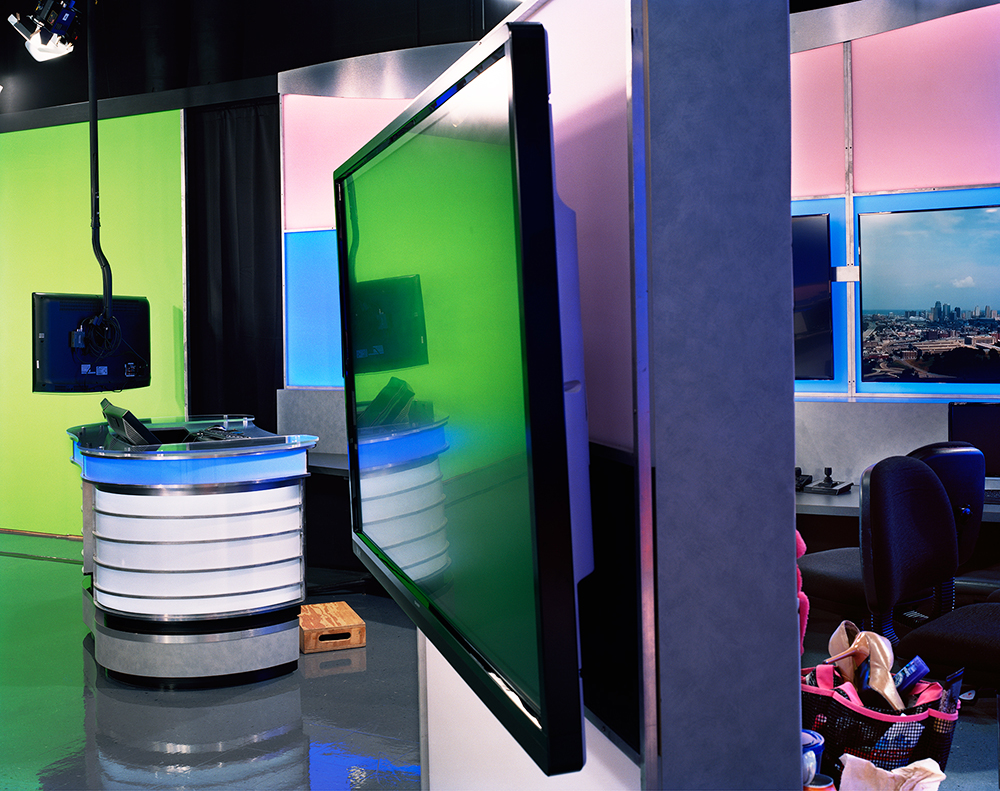 …the goal for students is not to graduate from a photography program as one who makes “good” photographs; the goal is to emerge a more literate participant in one’s culture.

Photographic artist and Associate Professor and Director of Graduate Studies, Department of Art, the University of Missouri at Columbia, Joe Johnson recently garnered the 2015 Excellence in Teaching Award from CENTER. It’s a well deserved accolade for the intelligence and forward thinking that he brings to the classroom. The award was based on the founding criteria: genuine passion for teaching, ability to excite students to learn, respect for students as individuals, and enduring artistic curiosity.

Joe’s inspired teaching (and others at the University of Missouri at Columbia) set the stage for student Drew Nikonowicz to create work worthy of the Aperture Prize (and the Lenscratch Student Prize), surely a reflection of enlightened educators and an innovative classroom. An interview with Joe follows.

Joe Johnson earned his MFA from Massachusetts College of Art and Design and a BFA from the San Francisco Art Institute. His worked has been reviewed or published in Art in America, The New York Times, The Boston Globe, Esquire Magazine Russia, and YVI Magazine in the Netherlands. Johnson’s works are included in the permanent collections of the Museum of Fine Arts, Boston; the Nelson-Atkins Museum in Kansas City; the DeCordova Museum in Lincoln, Ma; and the Beach Art Museum.  He currently teaches in the art photography program at the University of Missouri. Johnson is the recipient of Center Santa Fe’s 2015 Excellence in Teaching Award. 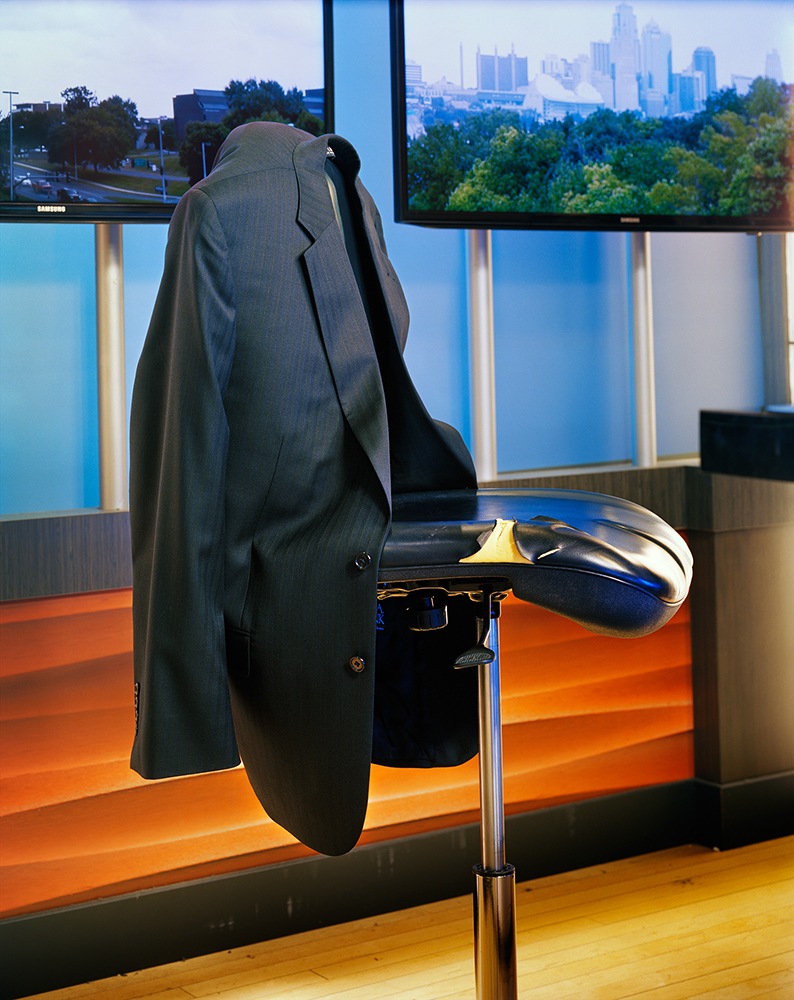 These pictures come from 3 projects about architectures that share an aesthetic of social persuasion. From evening news sets to casinos and mega churches, the critical narrative of my photographs depends on the extent that I can reconcile the visual appearance of these objects and spaces with their status as mechanisms of power and control. 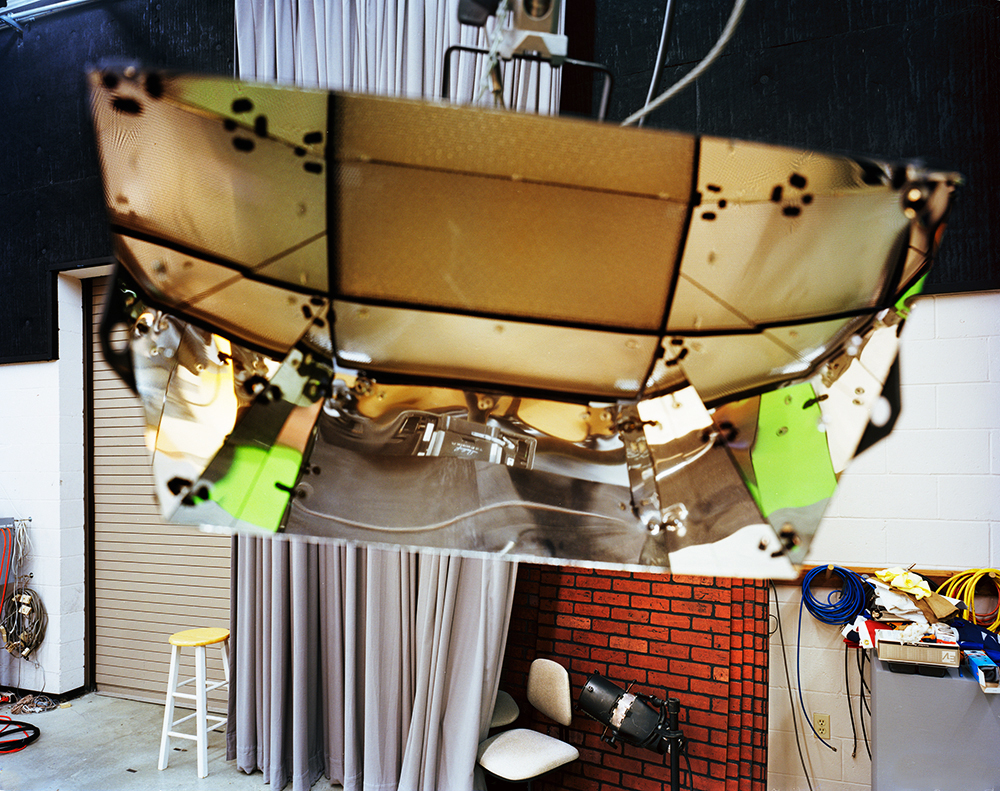 Congrats on CENTER’s Teaching Award! Can you tell us a little bit about your teaching philosophy?

Thanks so much. I was touched by the nominations.

I am hired to teach photography.  With photography becoming a basic unit of cultural production, the photo course is no longer a technical niche of the art program. In my classes, subjective experience through technological seeing form a student’s individual contribution to the ocean of images.  An education in art might help one to better understand the nature of this impulse—to make and share pictures. And also how a specific choice of context impacts how these images are received.  An approach to photography as both a basic unit of cultural production and a basic system of notation places photo courses in a camp we more associate with written composition or drawing.  So the goal for students is not to graduate from a photography program as one who makes “good” photographs;  the goal is to emerge a more literate participant in one’s culture. 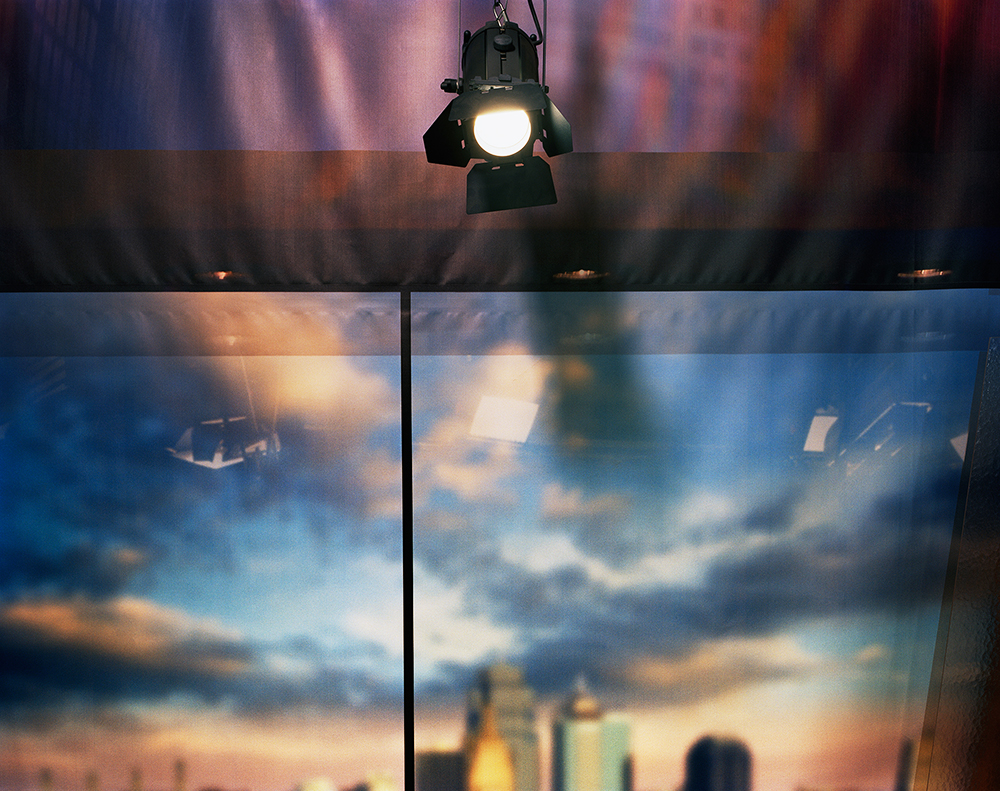 Drew Nikonowicz, the 2015 Aperture Award Winner and the 2015 Lenscratch Student Prize Winner comes out of your program–certainly a testament to you and the program at the University of Missouri at Columbia–what are you doing right?

I run a modest sized photo program that I share with my colleague Travis Shaffer. Our curriculum allows for an amount of customization and students who see this as an asset tend to thrive here. At the University of Missouri I am fortunate to have a number of highly dedicated colleagues in all media areas. If I personally do any one thing right its that my mentorship is textured by the knowledge that I do not do everything right and that my students are best served when many people contribute to their education as a studio artist. So I encourage students to seek their academic adventures beyond our womb-like lab. A young artist is less likely to find their confidence making mature, independently conceived work if they remain huddled around a cult of personality. Motivated and curious undergrads like Drew would be very suspicious of that form of pedagogy. 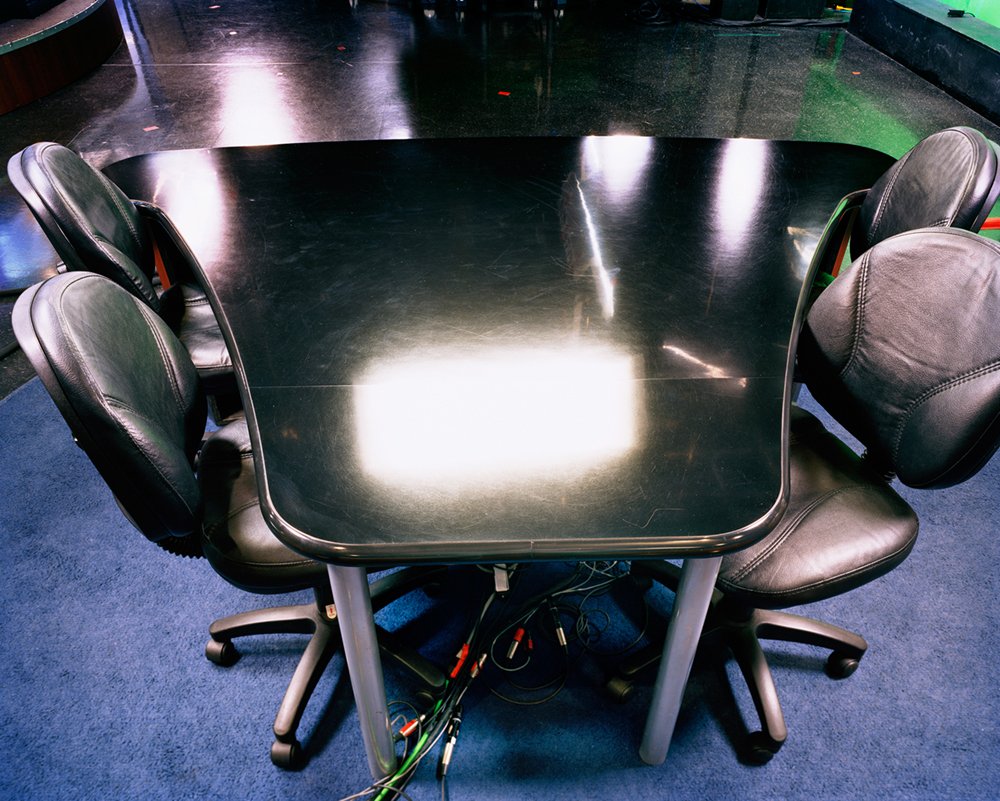 What do you think is the future of photography and what can the next generation bring to the conversation?

I mentioned some of this earlier but people have been writing about photography as a form of communication since the invention. But now that photography is truly democratized, not only in terms of the imaging apparatus but also with an accessible, lightning fast method of dissemination, we are only now fully realizing Moholy-Nagy’s 1932 prediction “the illiterate of the future will be the person ignorant of the use of the camera as well as the pen.” It is clear that photography has become a primary way to construct one’s identity and a point of access to one’s surroundings. We now use photography to know our world, so as to replace our sense of touch. The next generation must account for this in a more nuanced way than their pre-millennial forebears—who are likelier to bemoan the loss of “authentic” experience. 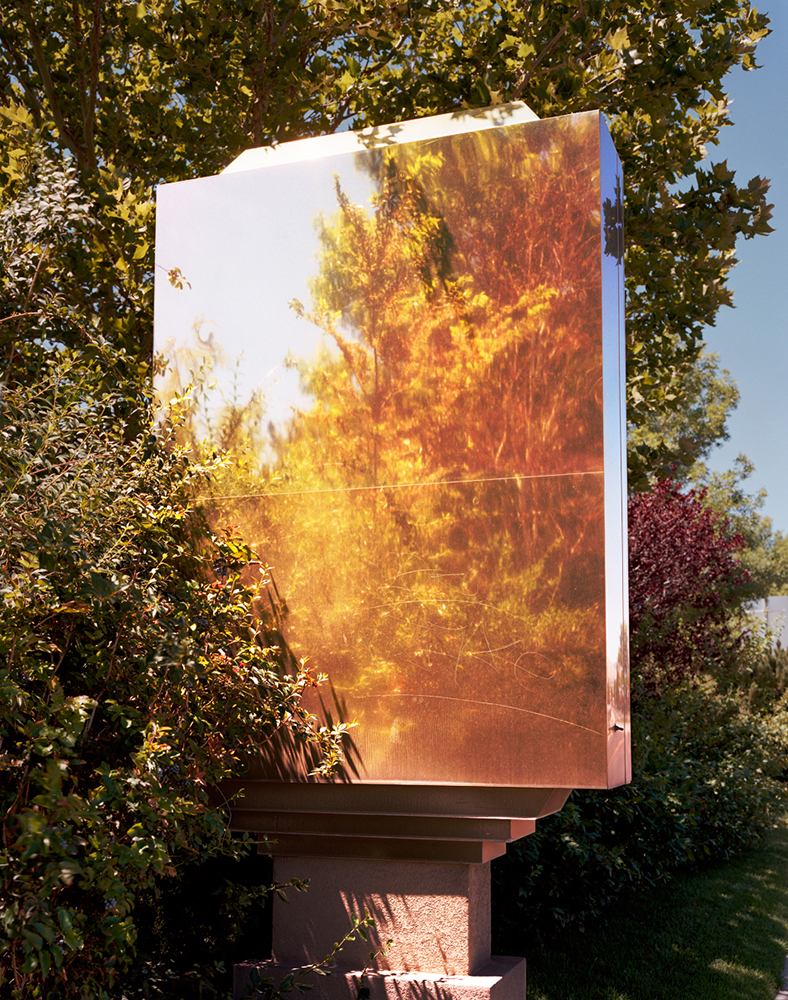 ©Joe Johnson, Gold Display, 2014, from the series The Playing Field

Does teaching impact your photography?

Certainly, in the best of ways. Now more than ever it is important that art educators make every effort to remain conversant in many kinds of art production, much more than we necessarily practice in our own studios. Teaching has kept me on my toes in this respect which in turn benefits my work. Many teaching artists (myself included at times) yammer on about the struggle to balance teaching and studio time. That is more an issue of one’s ability to balance, not of teaching itself. 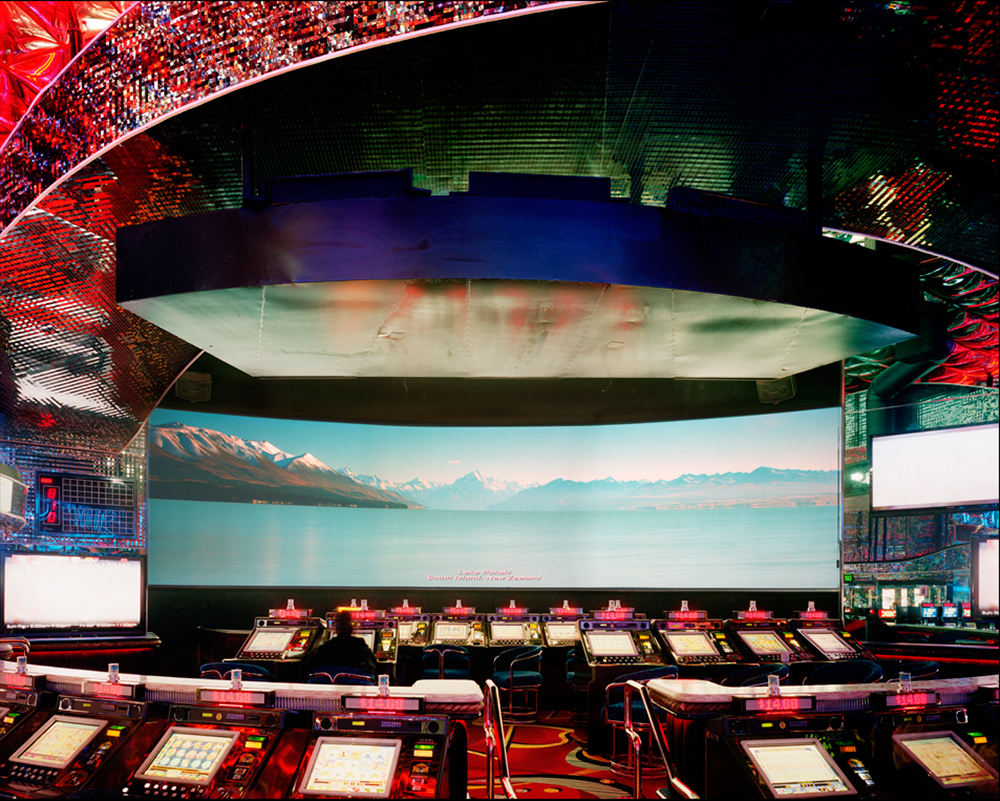 ©Joe Johnson, Panorama, 2013, from the series The Playing Field

What subjects draw your interest? 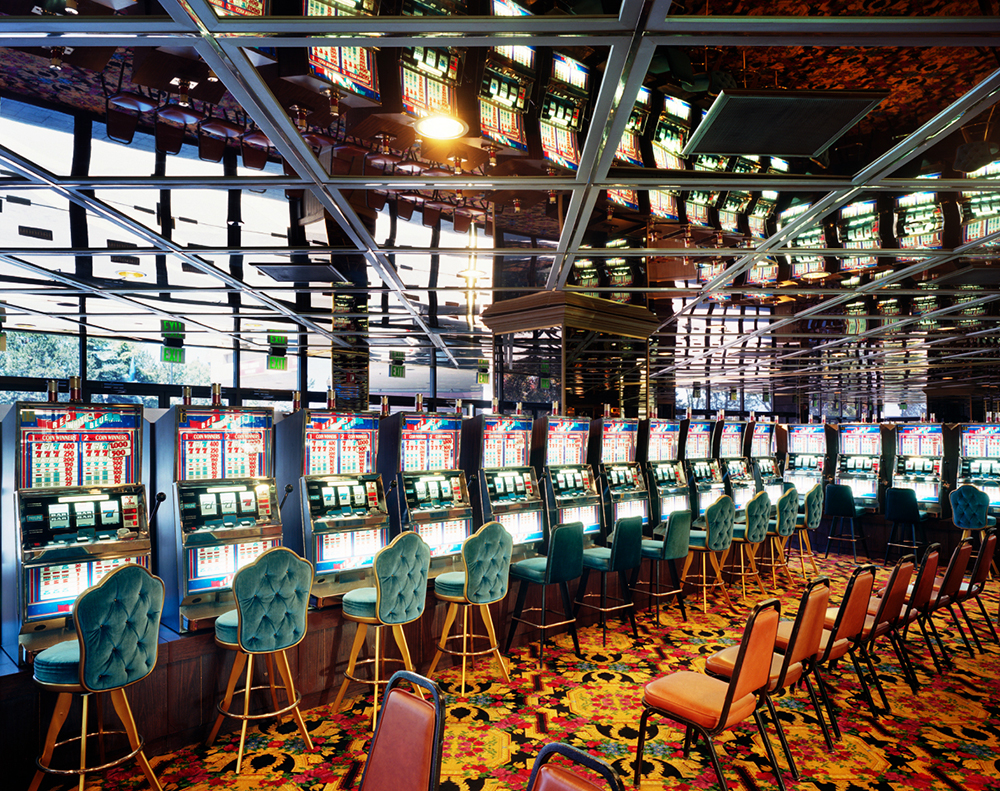 A minimal email morning, except for the one announcing that access has been granted for me to photograph something I’ve been dying to shoot for some time.
A call from my lab manager informing me that some expensive thing that was broken has now been fixed….for free.
The kind of partly cloudy when the sun seems to be connected to a volume knob that I can control.
10,000 steps. 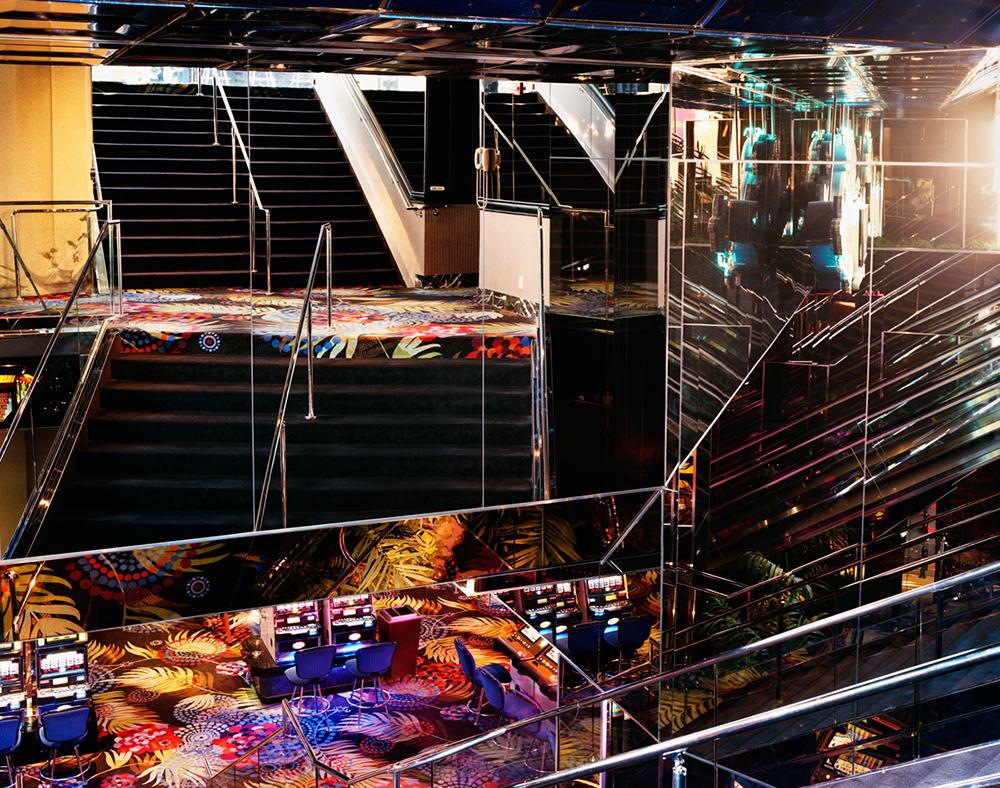 ©Joe Johnson, Escalators to the Atlantis 2013, from the series The Playing Field 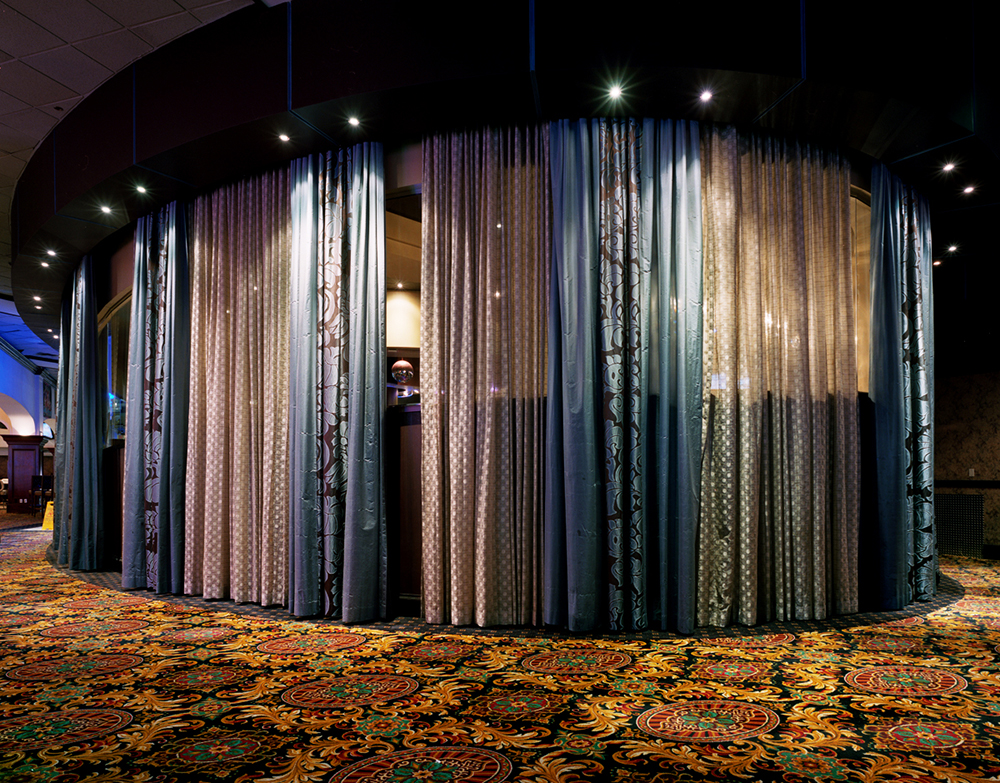 ©Joe Johnson, Restaurant, 2014 from the series The Playing Field 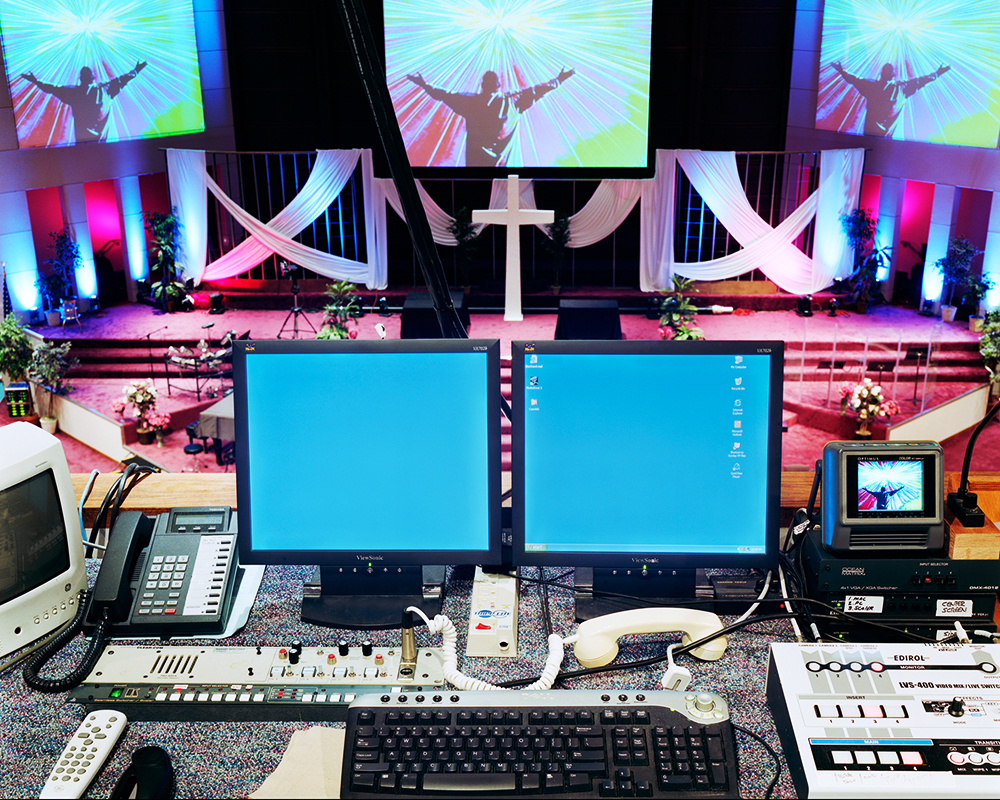 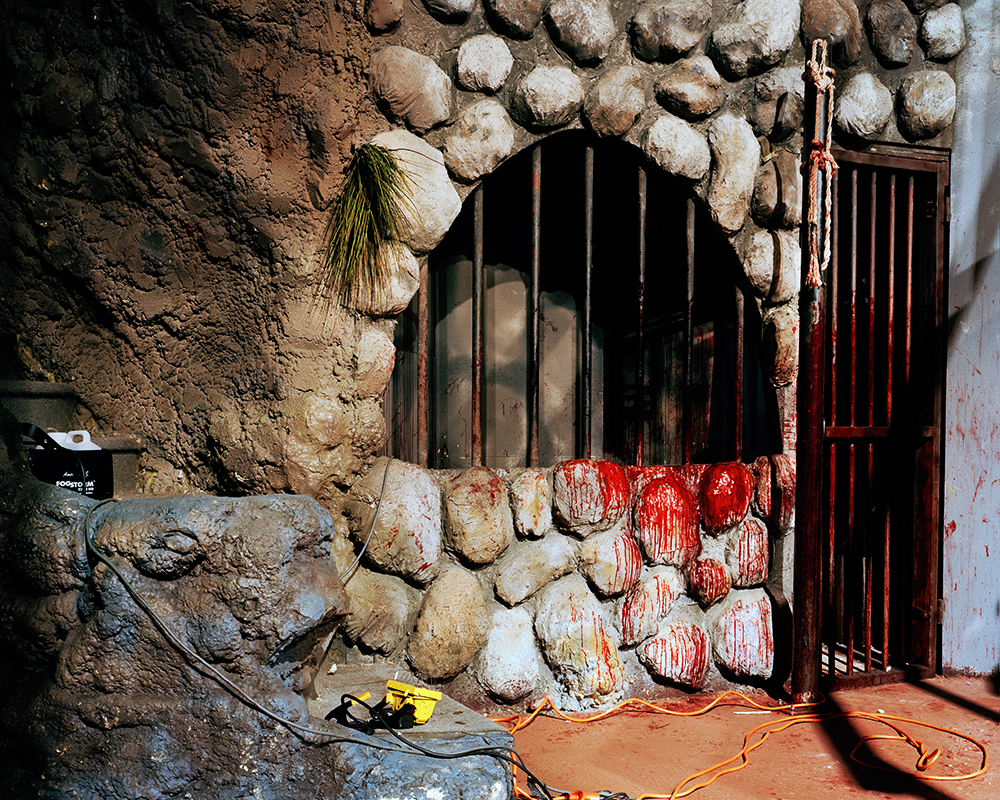 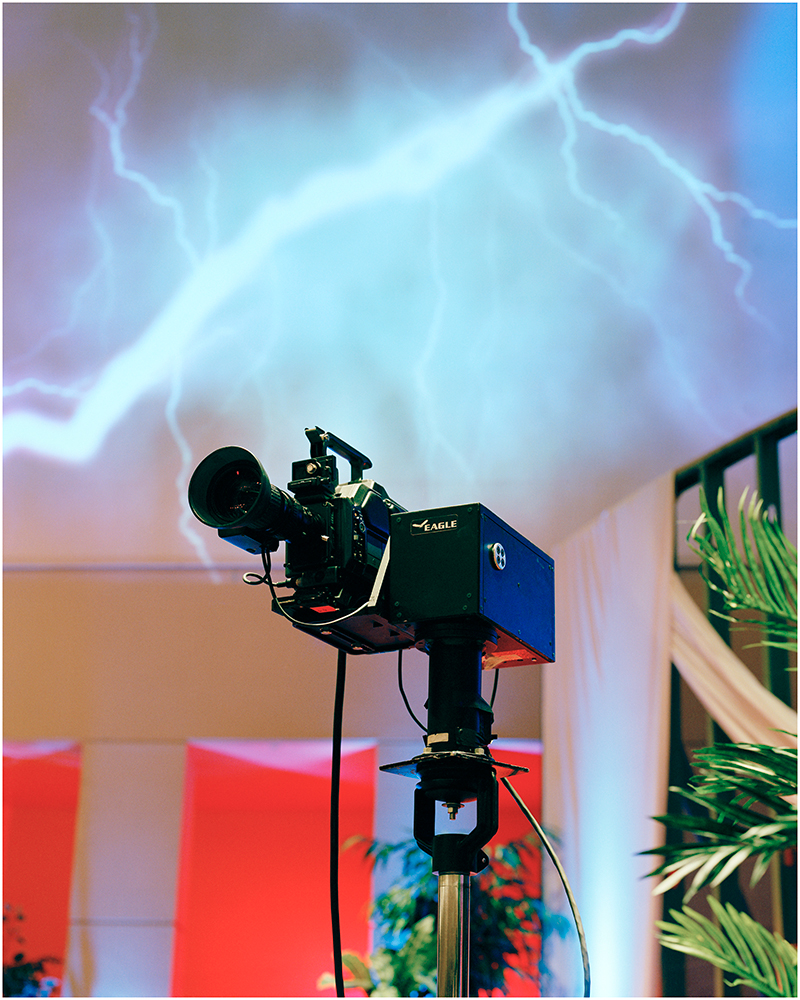 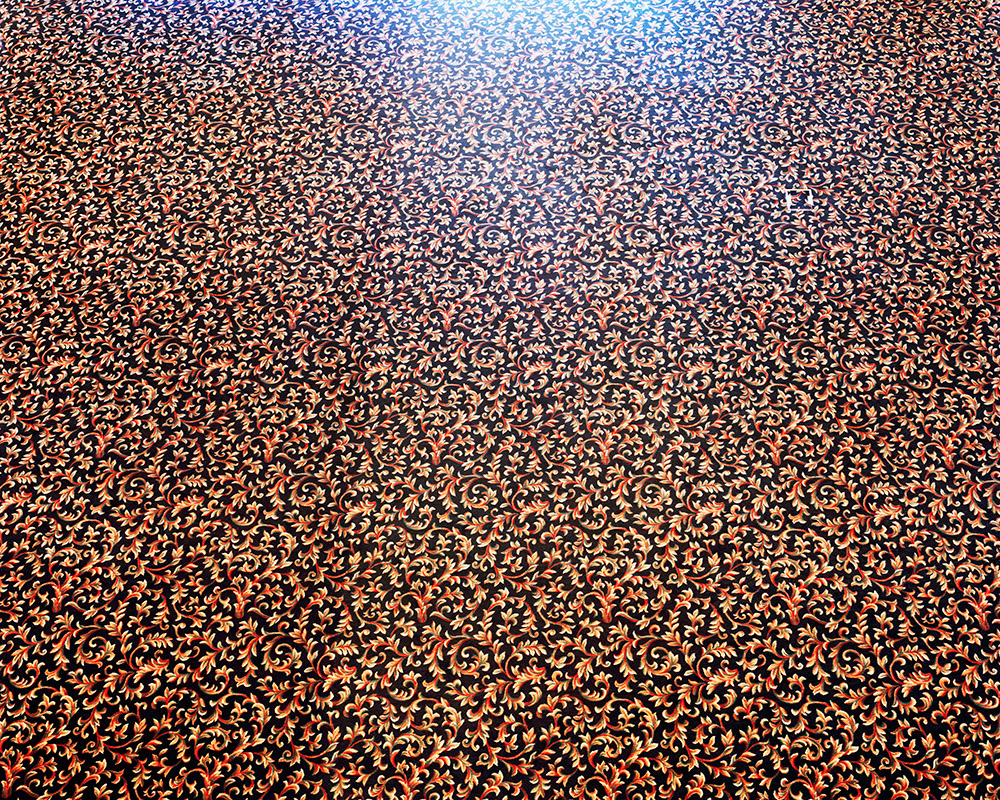 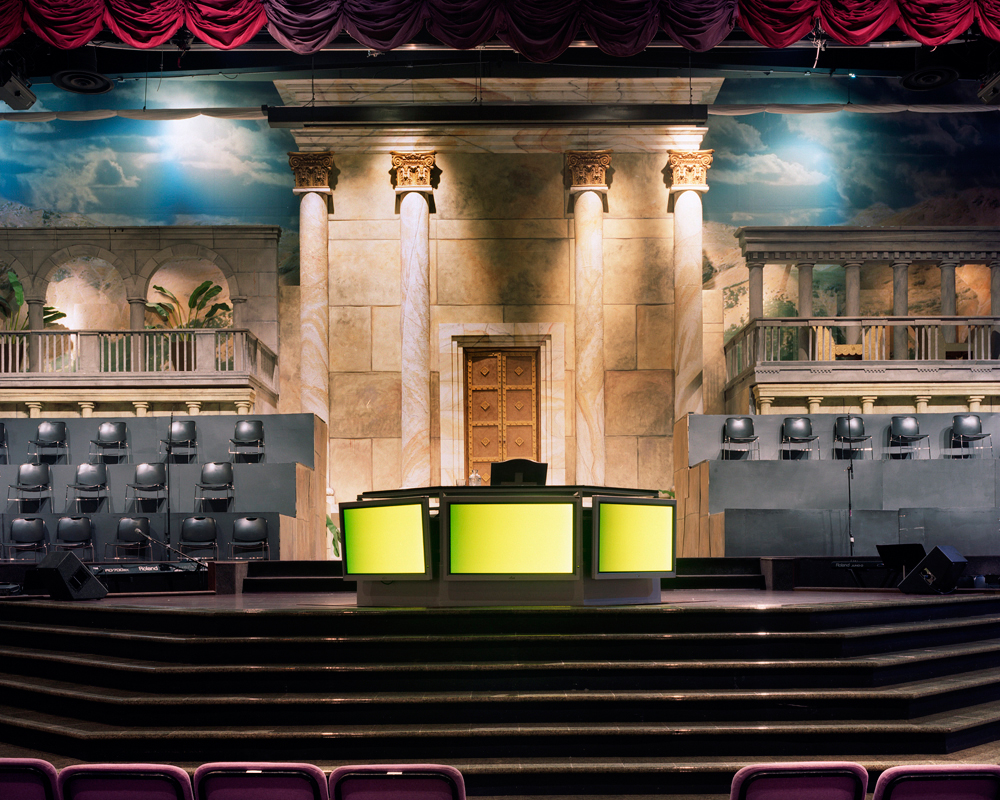 NEXT | Amanda Hankerson: Heads of the Hills >
< Richard Tuschman: Once Upon a Time in Kazimierz | PREV