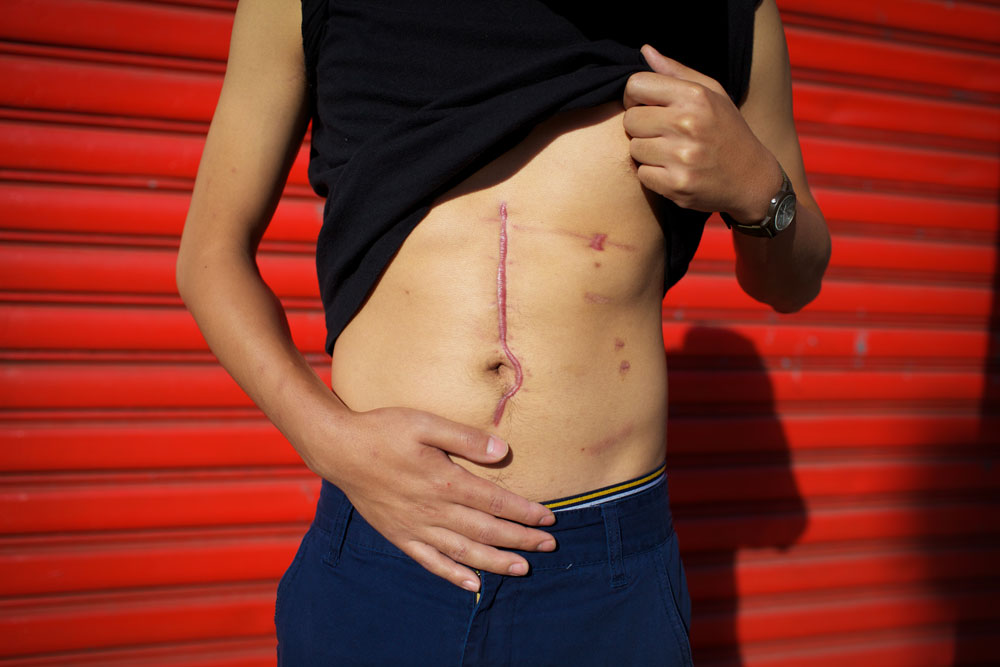 ©Kathy Shorr, Antonius: Shot on a crowded Brooklyn street corner at 2:30 pm by a man trying to shoot his ex-girlfriend. Brooklyn, New York 2013

Photographer and activist, Kathy Shorr has created a powerful, timely, and important project about the results of gun violence. Her series, SHOT, forces us to meet the gaze and witness the wounds of victims who have survived this trauma. Traveling all across the country, Kathy has documented over one hundred survivors, standing in the location where they were shot.

Kathy Shorr is a freelance photographer based in New York. Her work has been exhibited widely at such galleries as Howard Greenberg Gallery, NY, and Sariedo Gallery, NY. Her series, Limousine, was included in the prestigious Visa Pour L’Image, International Photo-Journalism Festival, in Perpignan, France. Her work has been published in Popular Photography, Newsweek, French Photo, Camera Austria, Photo Review, On Seeing, New York Observer, and The Village Voice. As a freelance educational consultant, Ms. Shorr works with diverse groups of all ages in helping to learn how to express themselves through the lens and screen arts. 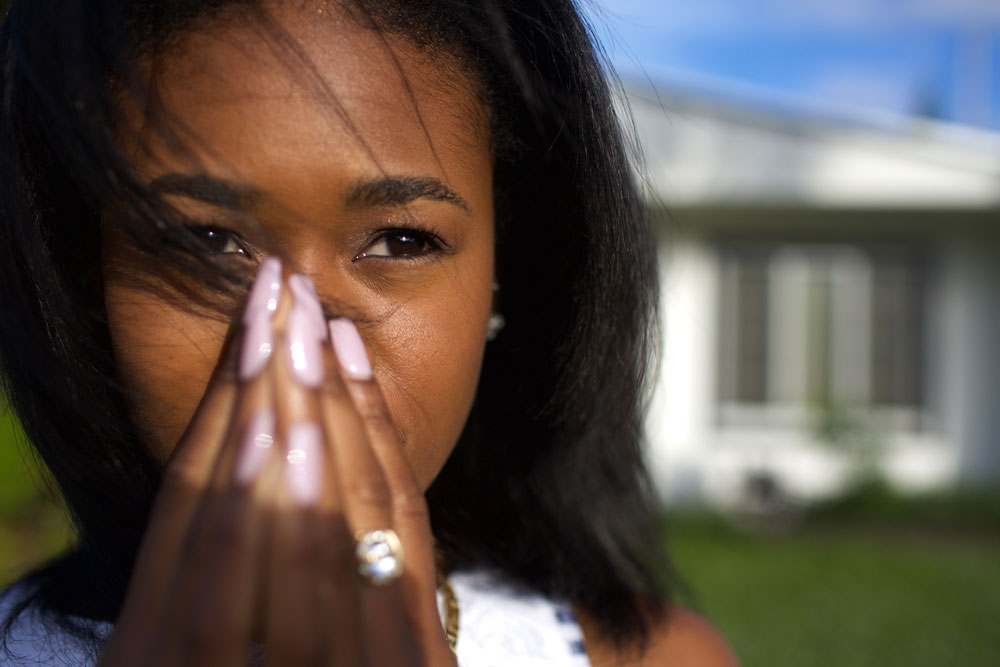 ©Kathy Shorr, Megan – Shot with an AK-47 through the pelvis. The car she was riding in had stopped to drop someone off when it was besieged by a hail of bullets. Megan threw a two year old onto the floor and laid on top of him across the back seat. The bullets ripped through the back of the car hitting her. She bled out on the way to the hospital and now walks with a limp. A gang initiation was believed to be the motive. No one was caught. Miami Gardens, Florida 2012

The increasing ubiquity of gun violence has, unfortunately, become the norm across the world but particularly in the United States, where we have begun to hear horror after horror on an almost daily basis.  So much so that it has now started to produce a numbing effect, a helplessness that allows us to hear the news and say, “here we go again” and put it out of our mind. Gun violence is now something we expect to happen. 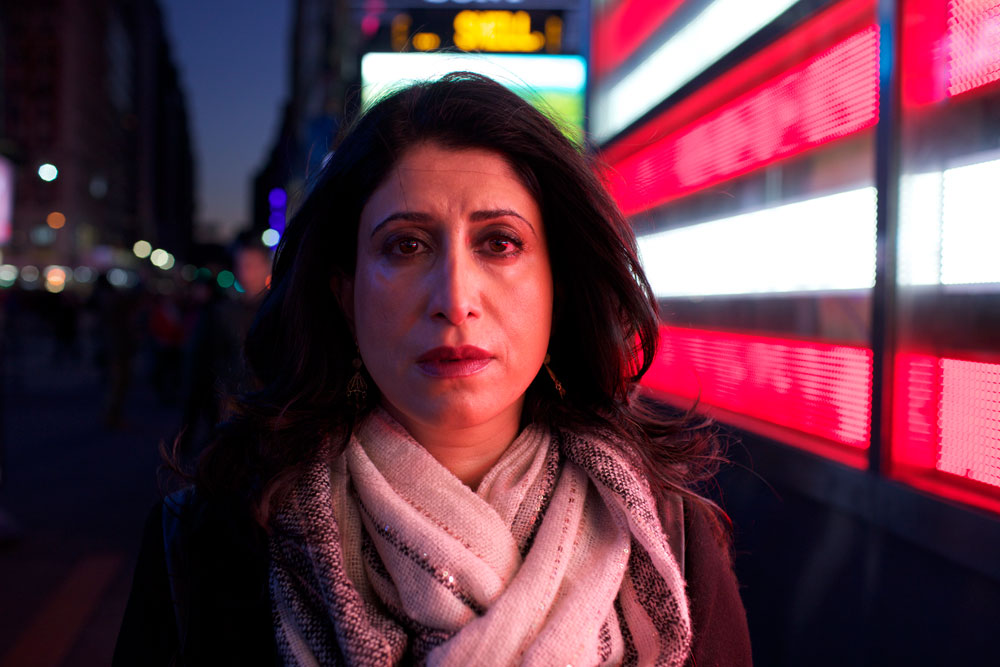 ©Kathy Shorr, Sahar: Shot while walking through Times Square in the early evening with her cousin, by police officers pursuing someone else. 2013

The goal of SHOT is to focus attention on the survivors of gun violence- people who have been shot and survived the experience. From across the United States, survivors from different socioeconomic, political, ethnic, gender and age groups including high and low profile shootings are the united faces of gun violence, 101 varied, relatable people who have gone through a life altering experience. 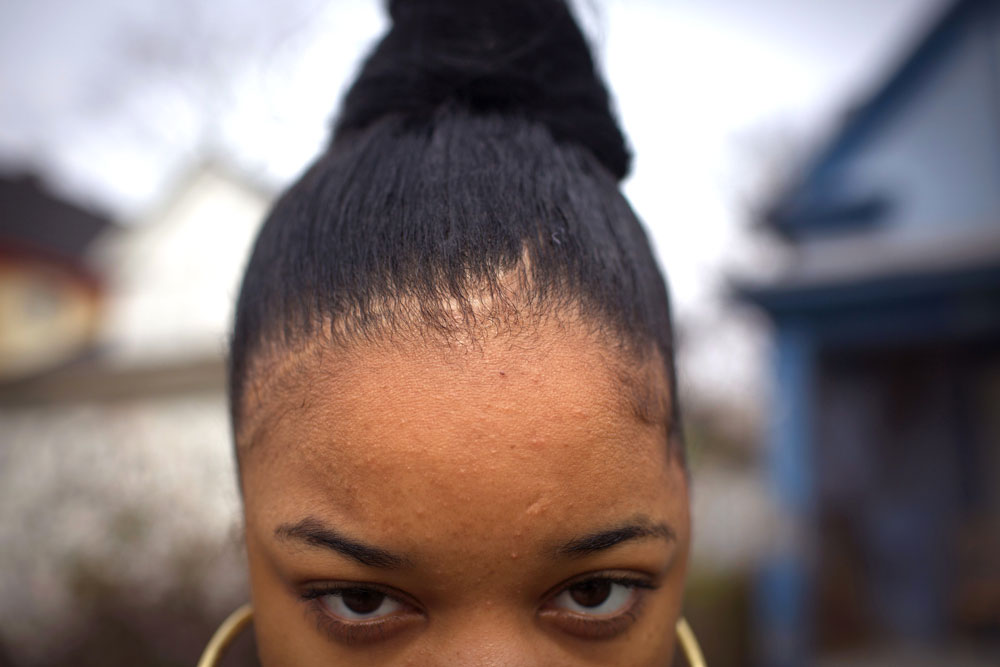 ©Kathy Shorr, Chloe: Shot in the head as a 17 year old while talking with friends by a stray bullet. Kansas City, Missouri 2013

The majority of portraits are taken at the location of the shootings. This adds another dimension to SHOT as most of these locations are banal and “normal” places we all visit: shopping centers, places of entertainment, church, neighborhood streets, movie theaters, etc. Many of the shootings actually occur in the survivor’s homes. This again gives the viewer another chance to connect with the participants and to imagine just how close we all are to the possibility of this happening to someone that we know. 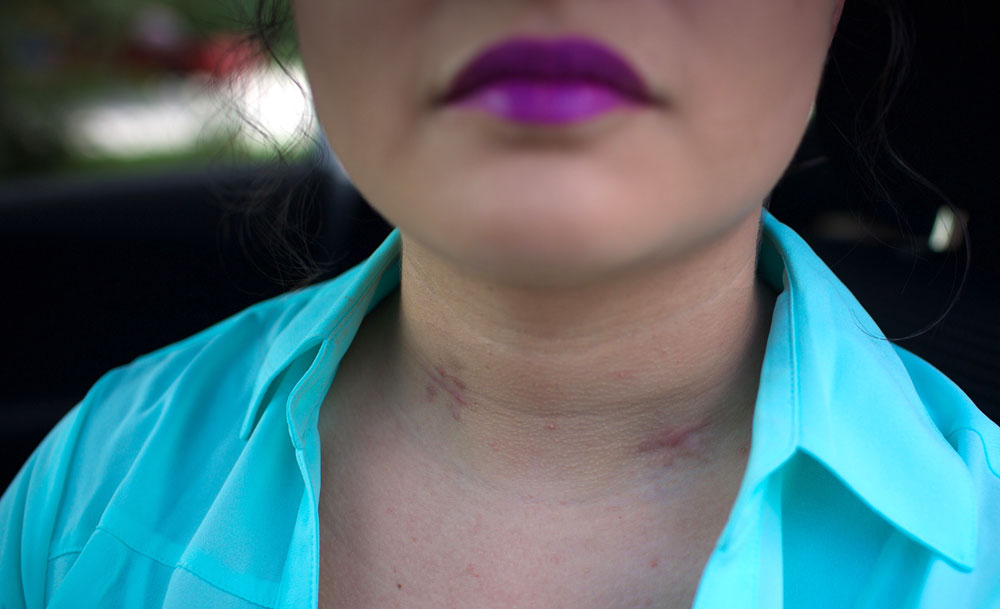 ©Kathy Shorr, Cori- Shot in the neck by the still at large, “Colorado highway sniper” When her Holiday Inn shift ended at 11 pm , she got in her car and began to drive home.  While on the road headed for the freeway, she stopped at a red light.  In the next instant her driver side window shattered and as glass fell over her, she realized that she had been shot. The sniper’s car drove off.  Fort Collins, Colorado 2015

Those who die from gun violence can only address the issue as statistics and memories of lives that were.

The SHOT project focuses on the living whose lives have been forever changed by the emotional and physical trauma of gun violence. They are present in their portraits, words (survivors write a statement to accompany their photo) and voices (video clips) and are not able to be dismissed as statistics that have passed on but rather as a “force” to reckon with.

SHOT enables us to explore the dialogue about gun violence. A number of the survivors in SHOT are responsible gun owners. It is not meant to be polarizing but rather to connect us to each other and how much we have in common, giving us the opportunity to begin to take an unbiased look at guns in American society. Responsible gun laws are desired by most Americans. 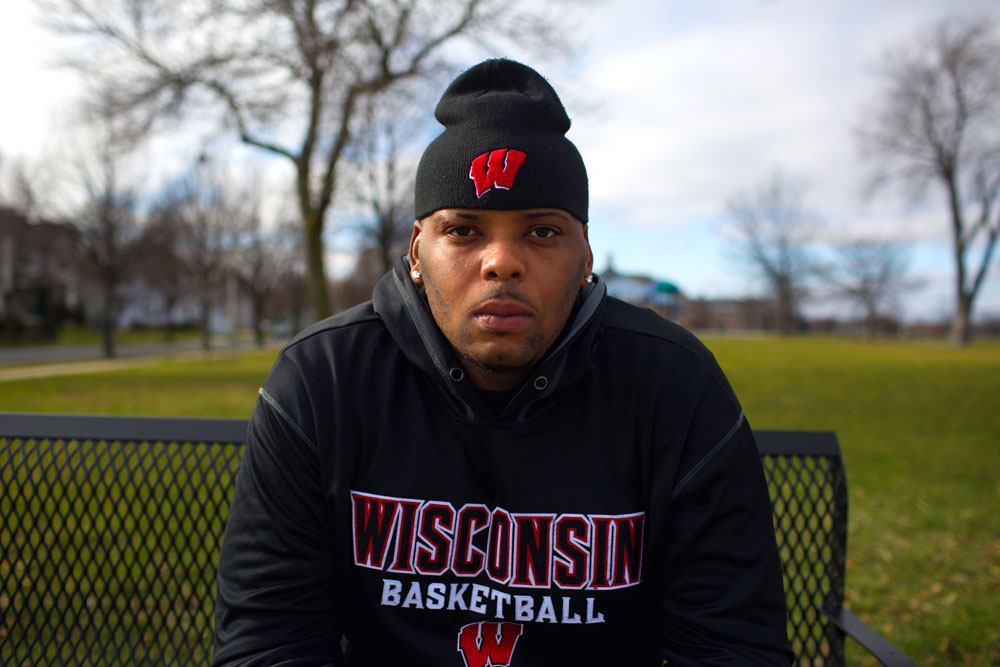 ©Kathy Shorr, Isiah- Shot on two separate occasions while driving in his car within one year of each other. The first time a group of strangers pulled up to his car and started shooting. He was hit three times, once in the chest. The second time there was a dispute at a club between two groups. When he and his date left, he saw some of the men sitting in a car outside. He told the girl to go back inside, started to drive away and was hit by gunfire in his arm. Milwaukee, Wisconsin 2014 & 2015 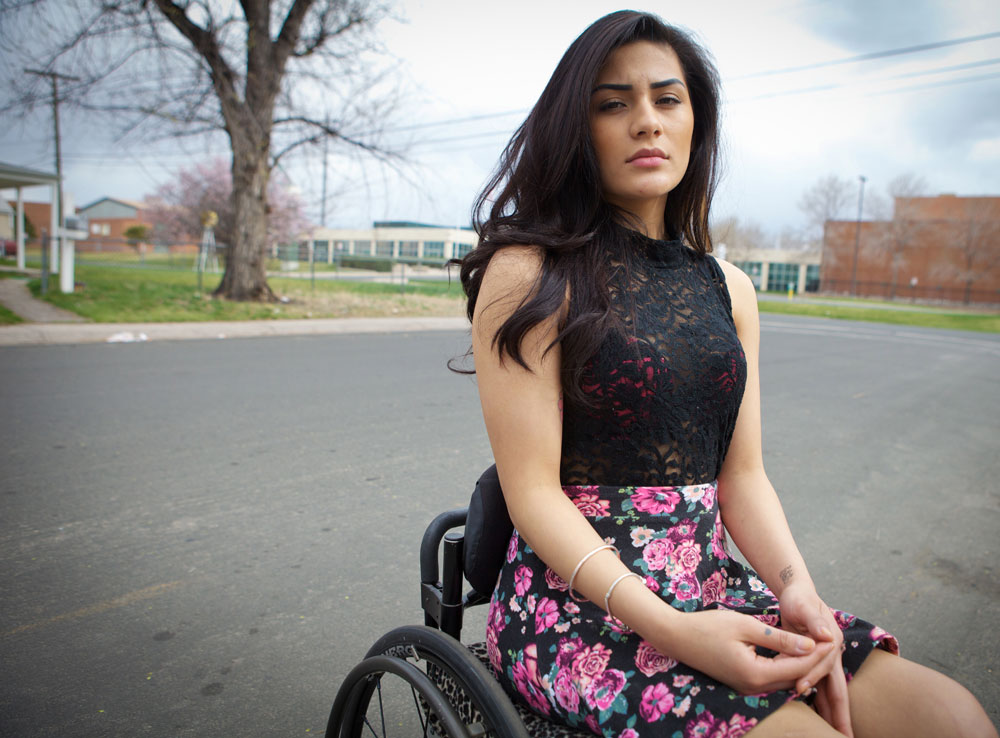 ©Kathy Shorr, Karina: Shot at the age of 16, the unintended victim of a gang revenge drive by shooting while standing with a group of friends outside of her high school in Aurora, Colorado 2010. 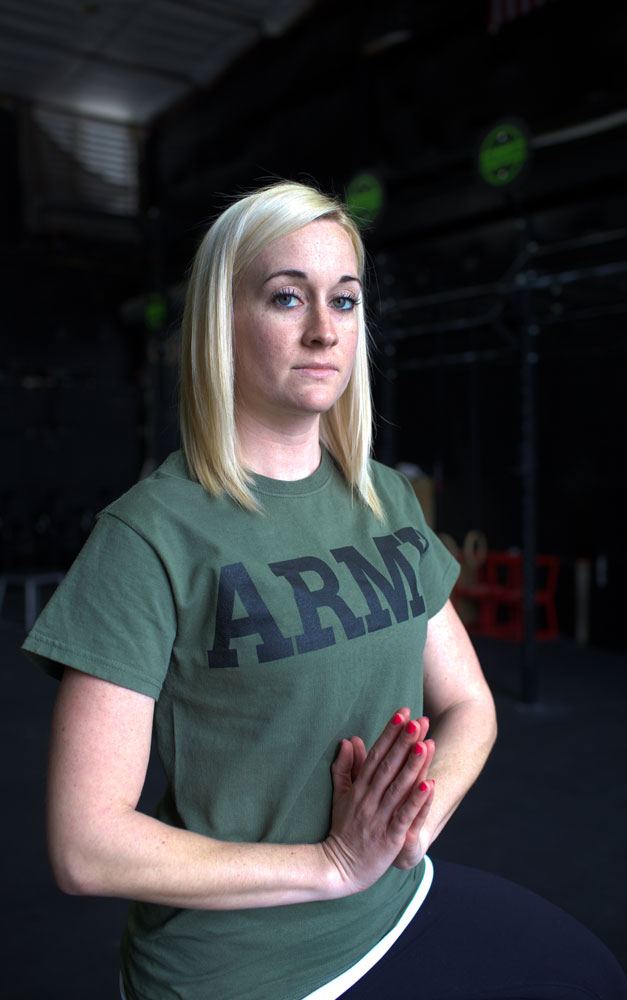 @Kathy Shorr, Dayna: Army Sergeant and Purple heart recipient shot in the Fort Hood shootings by a crazed psychiatrist who killed 14 people and injured 32. She hid behind a table as he went through the holding area. When he reached her he shot her three times. Fort Hood, Texas 2009 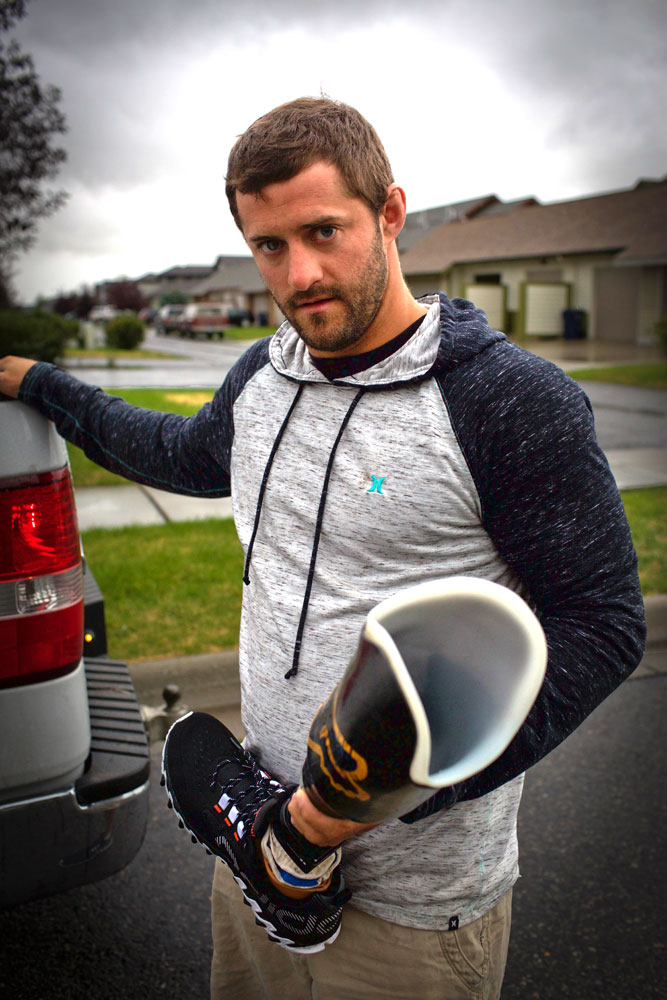 ©Kathy Shorr, James- Shot after he said something to a rowdy birthday party guest. The ex-military man left and came back to the party with a shotgun. He placed the gun on James’ calf and fired. He then shot his close friend in the abdomen, killing him. He ran out of bullets as he placed the gun to the temple of his second friend. Bozeman, Montana 2013 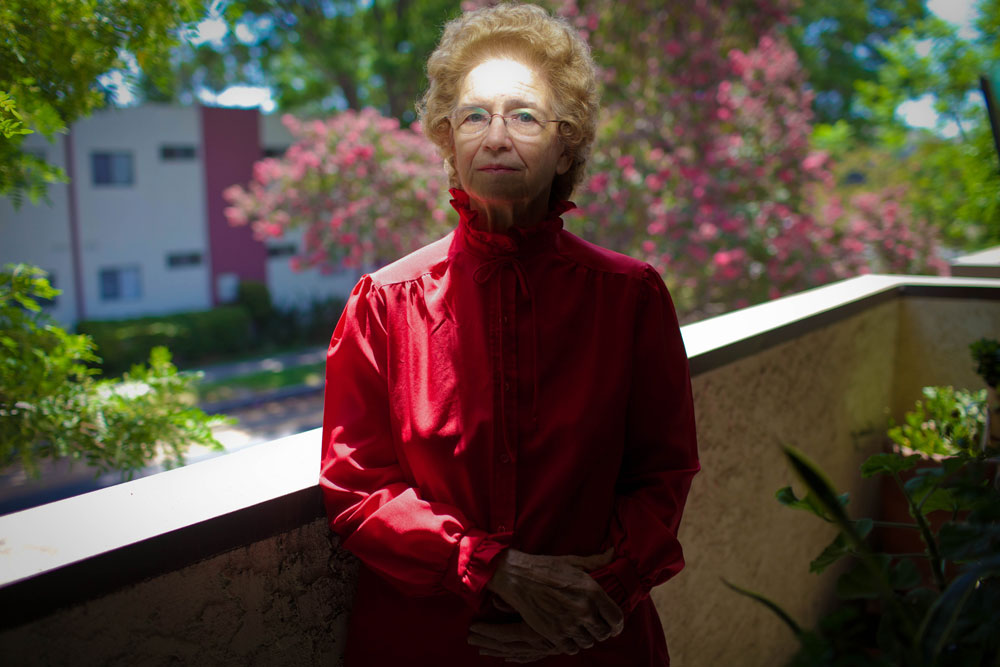 ©Kathy Shorr, Marlys: Shot through the heart by her husband of 41 years. Canoga Park, California 1999 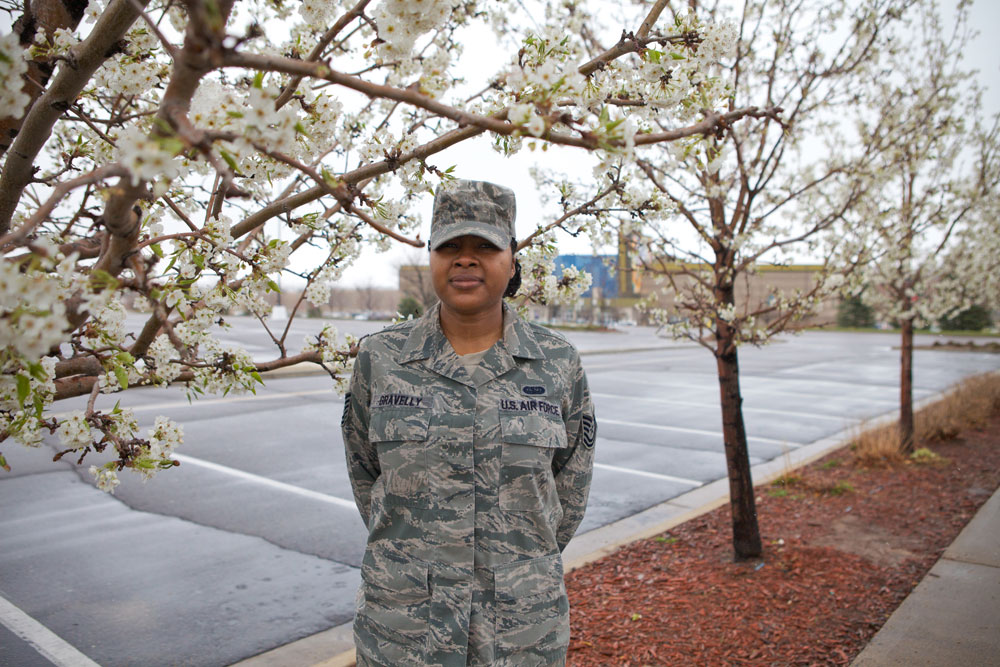 ©Kathy Shorr, Moni: One of the 58 people shot at the movie theatre in Aurora at the Batman movie premier. Her friend who was sitting next to her was killed. Aurora, Colorado 2012 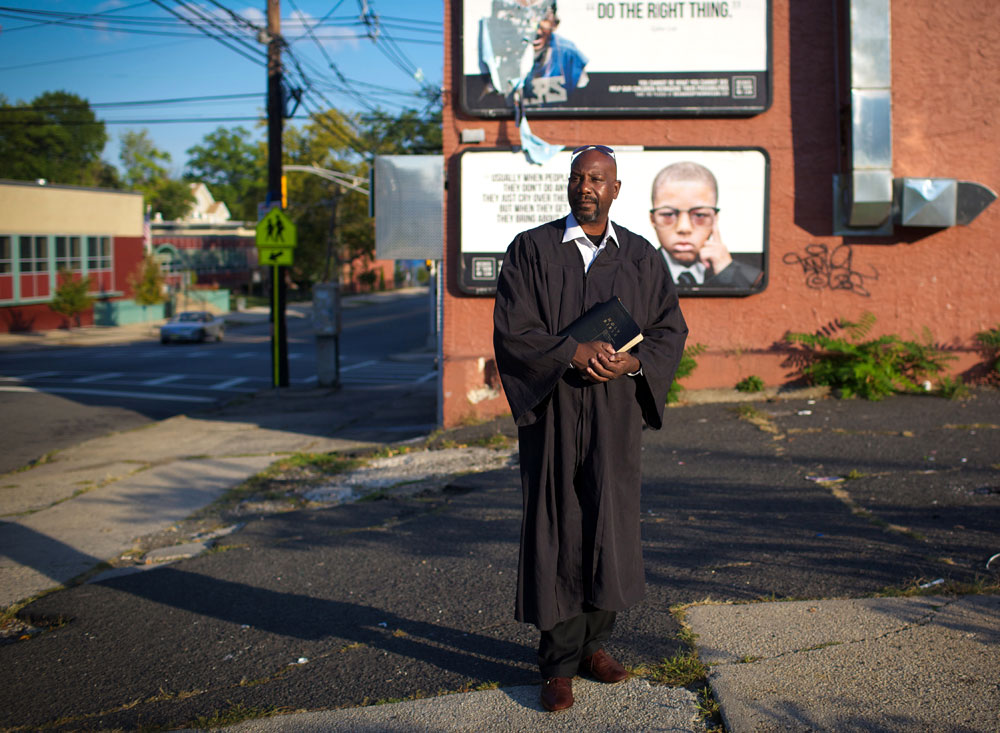 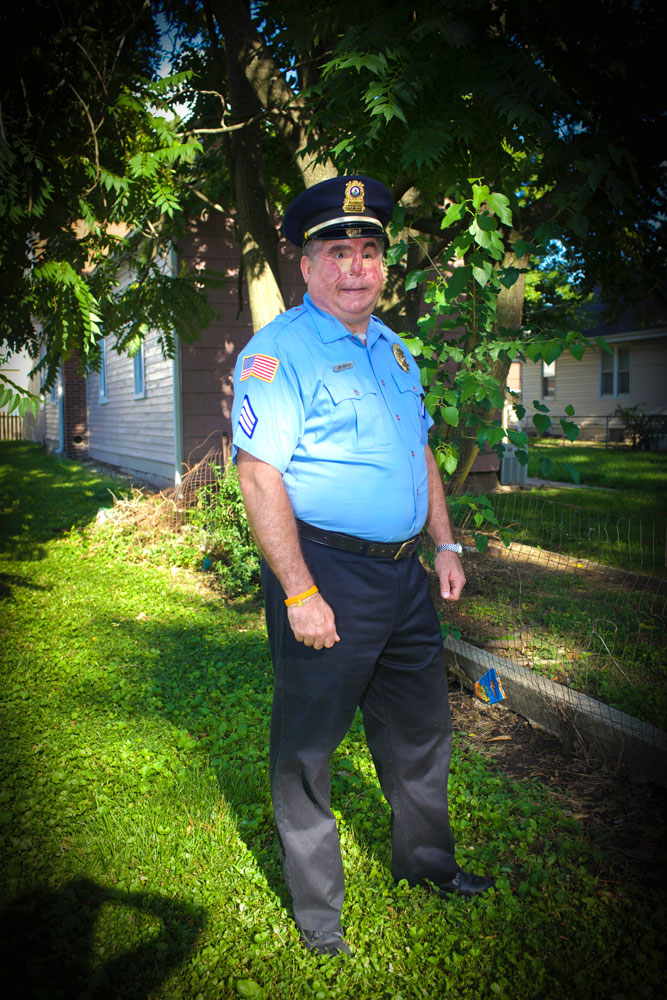 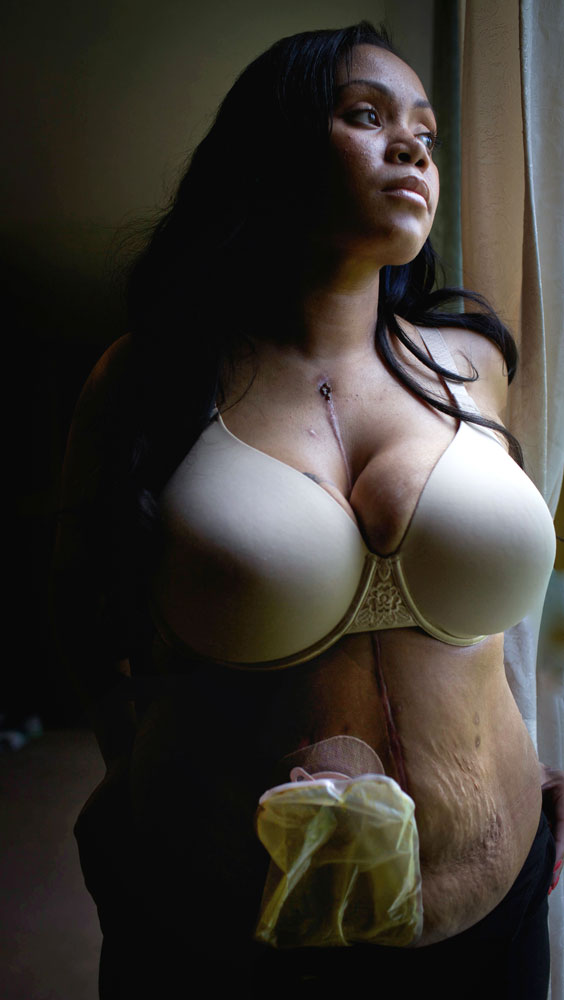 ©Kathy Shorr, Shirley: Shot by her ex-husband while picking up her daughters at nursery school. He fired from two guns and shot her 14 times. The ex-military man was released on $25,000 bail to await a hearing. Indianapolis, Indiana 2014 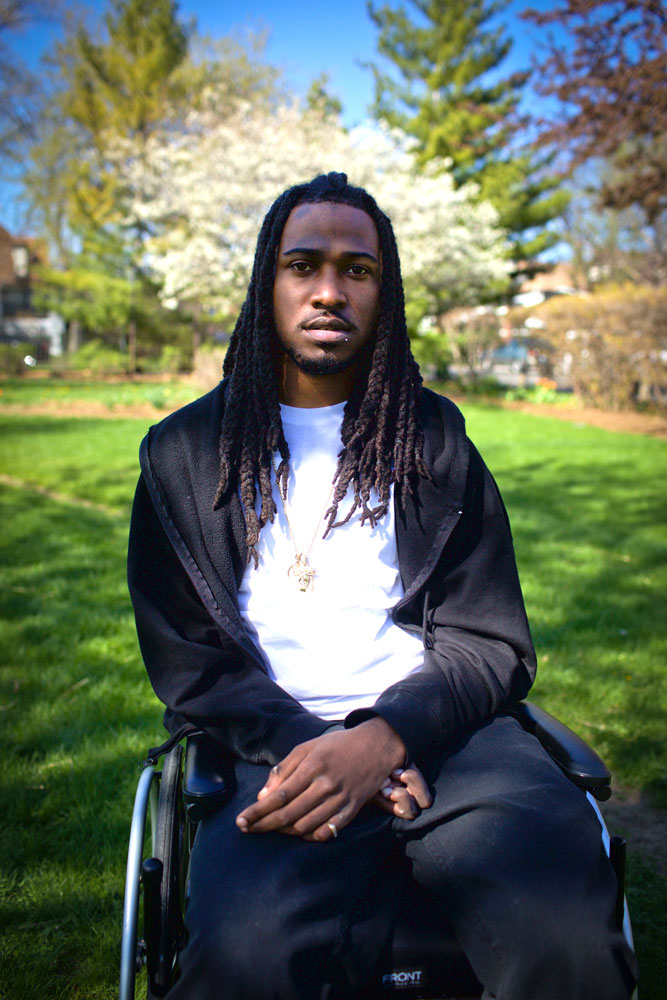 ©Kathy Shorr, Ondelee: Shot in the face as a 14 year old by a boy who had an argument with him at a house party. He has forgiven the shooter because he knew he could not move on if he harbored hate. His mom had to quit her job to care for him. Chicago, Illinois 2009 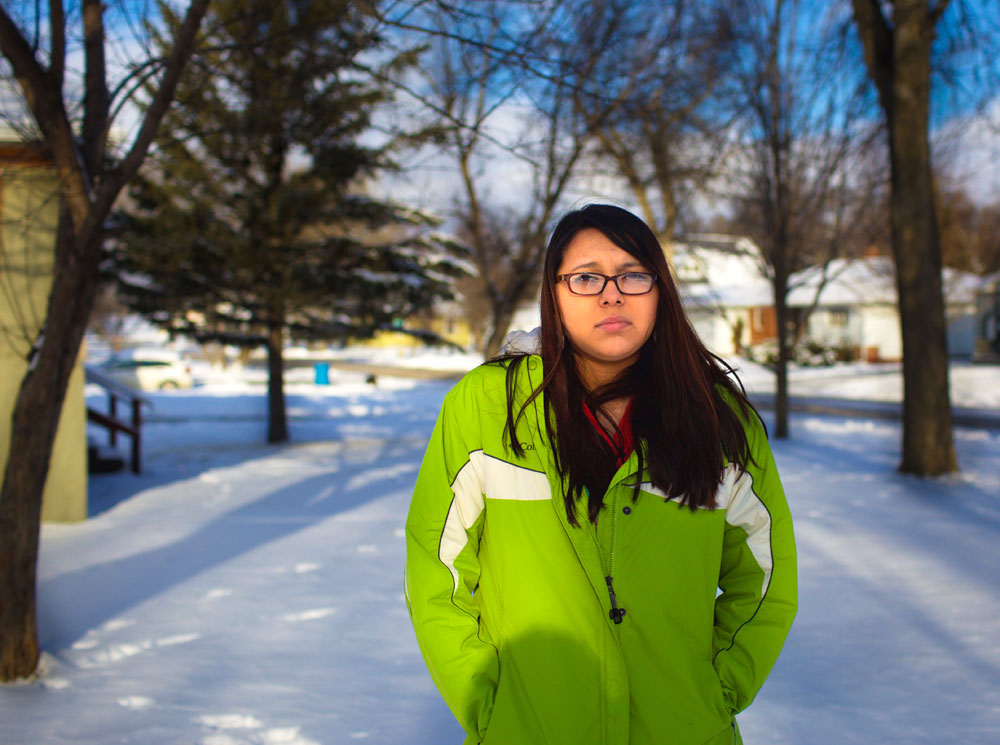 ©Kathy Shorr, Karissa- Native American, shot three times in the back by her abusive boyfriend. Three people were killed including her best friend. He then turned the gun on himself. Sisseton, South Dakota 2014 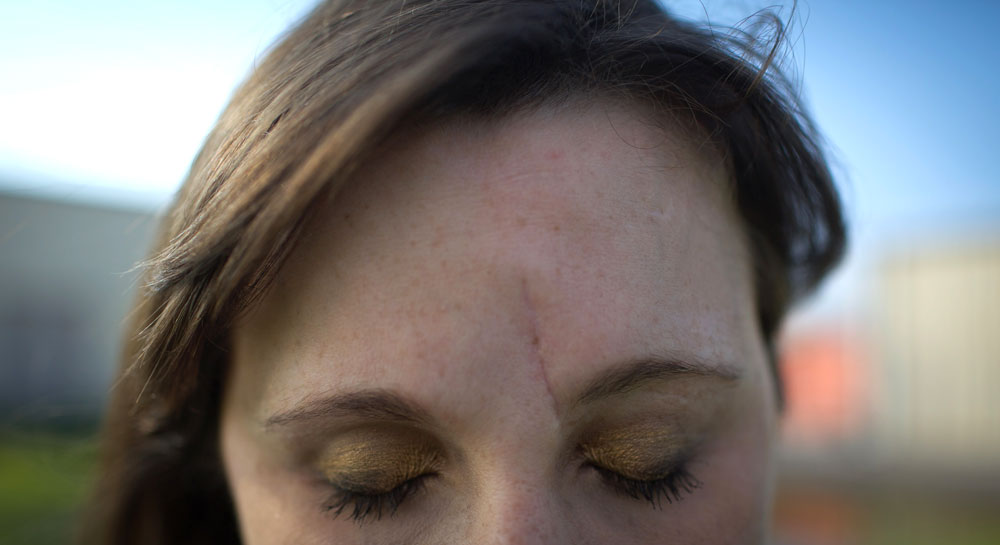 ©Kathy Shorr, Sara: Shot as a 13 year old, through the forehead point blank by a man who stole her mom’s car while she was sitting in it waiting for her. He drove her to a field and raped her then had her kneel down and count to ten before attempting to execute her. Kenner, Louisiana 1994 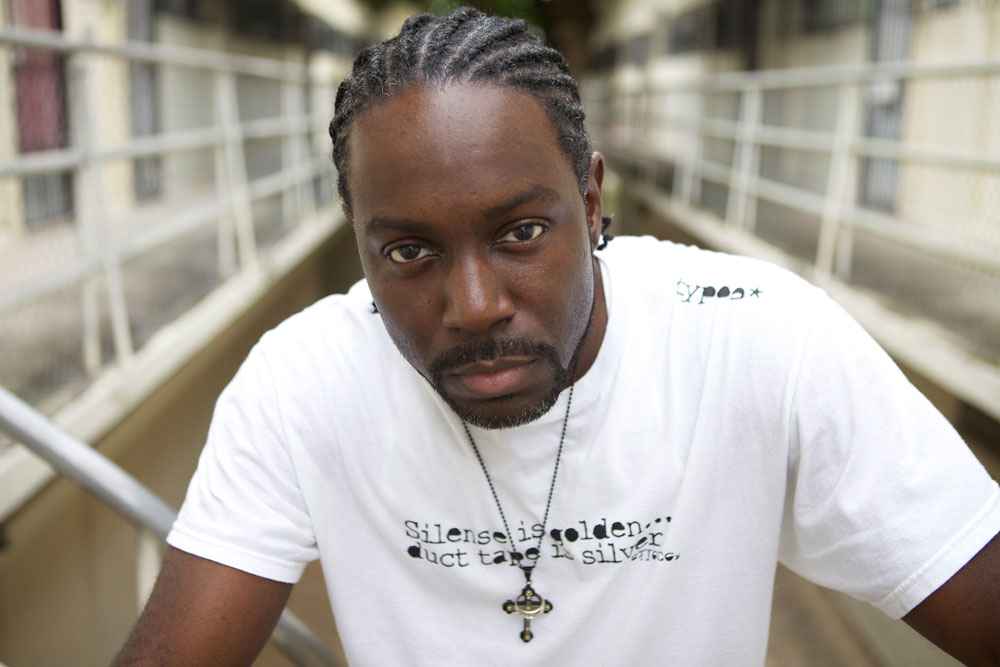 ©Kathy Shorr, Jewelz: Shot after having just picked up his take out order of food at a Miami restaurant. The shooter had an argument with the restaurant owner earlier in the day, came back killing her and shooting Jewelz in the process. The police believed he was the shooter and he was handcuffed at the hospital until the owner in her last words asked, “How is my customer?” Miami, Florida 2006 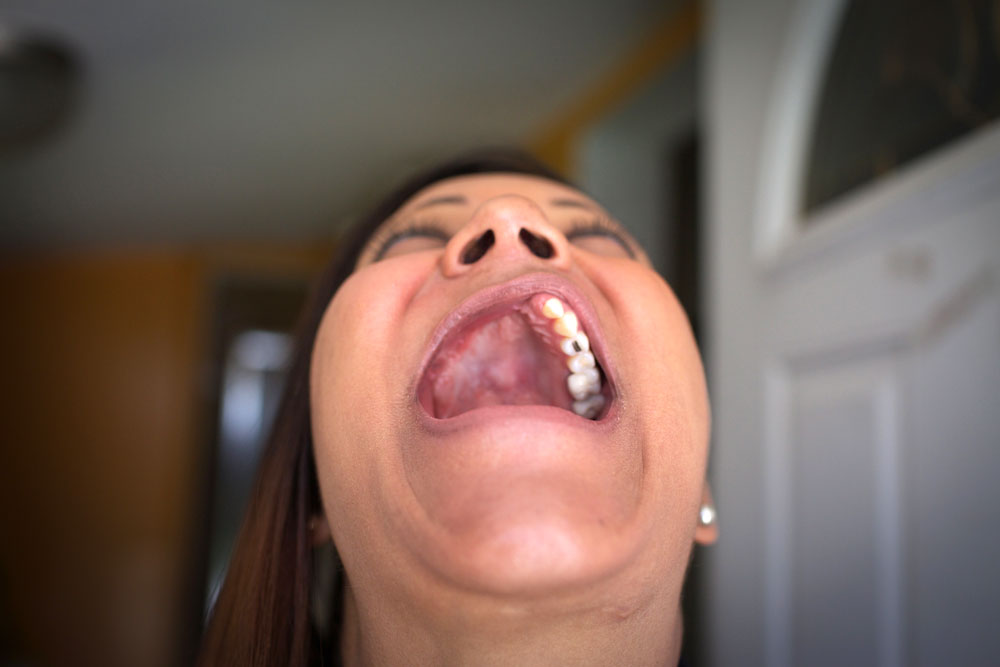 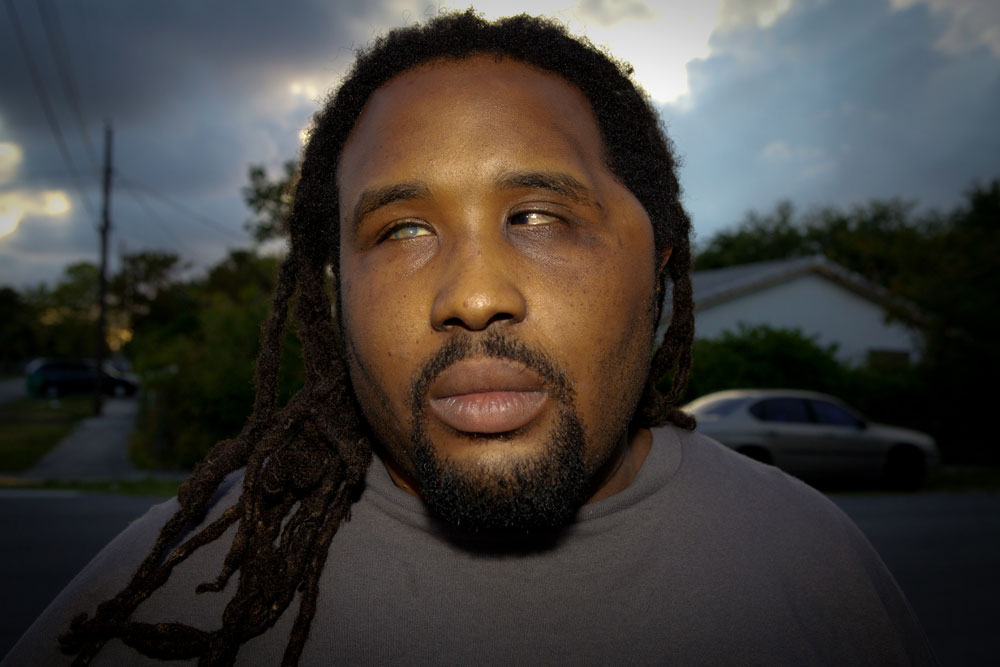 ©Kathy Shorr, Rayvn: Shot and blinded by his “friend” in the Liberty City area of Miami, Florida 2002 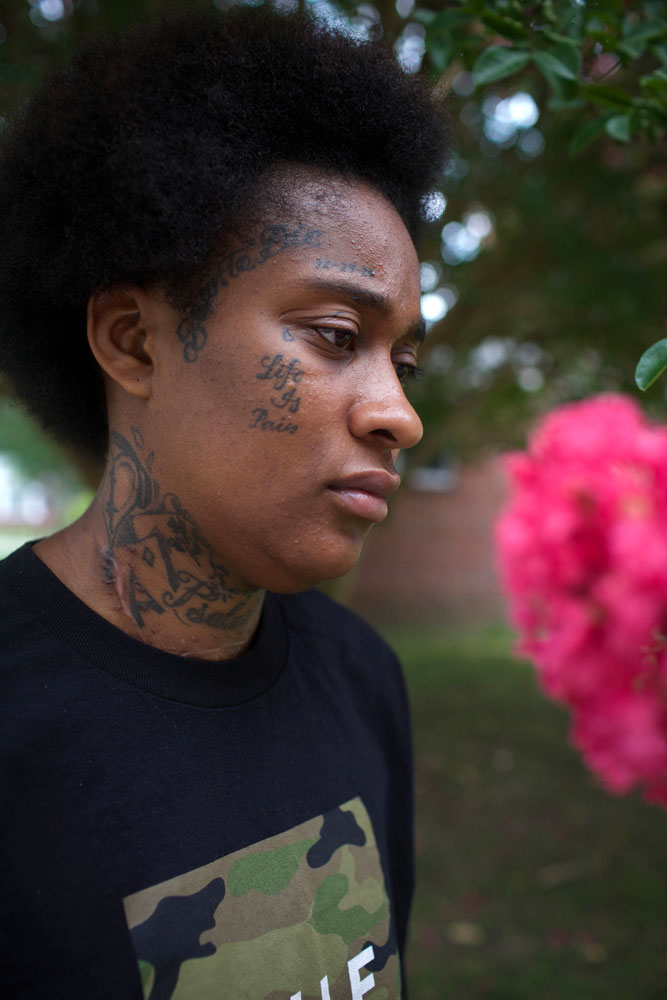 ©Kathy Shorr, Shanessa: Shot by her sister’s boyfriend. Newport News, Virginia 2014. Update: April 2015- friends of the shooter, shot Shanessa again in her face and hand in an attempt to silence her testimony. 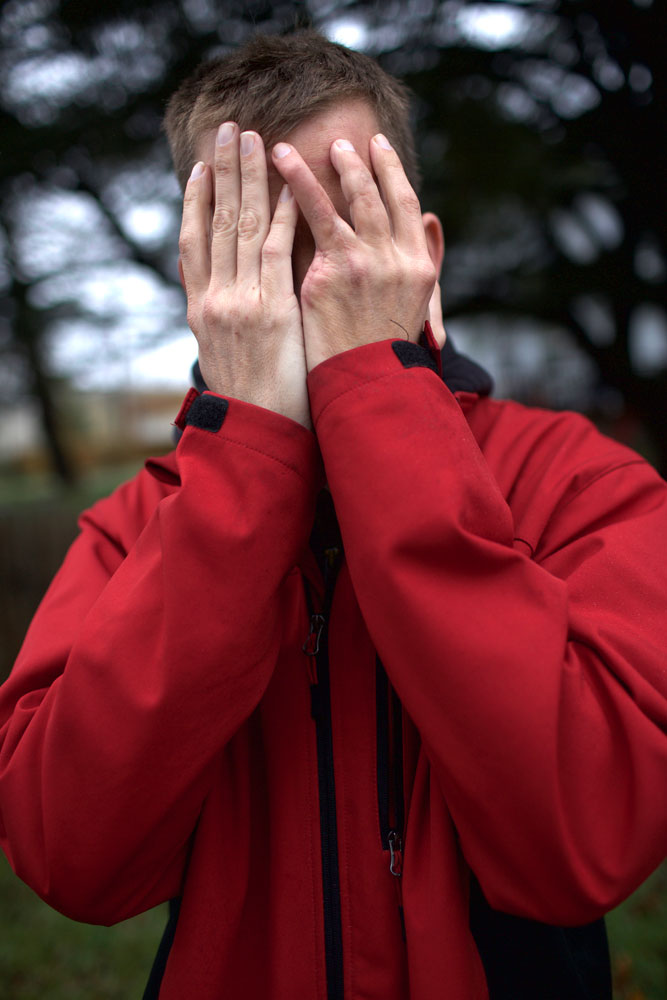 ©Kathy Shorr, Ryan: Shot in the hand, losing a finger and crippling two other fingers as he sat in his car talking to his ex-girlfriend. Atlantic City, New Jersey 2014

NEXT | Notes from a Curator: Photographic Posturing >
< Marjorie Salvaterra: HER: Meditations On Being Female | PREV