Jim Kazanjian: Aberrations, Anomalies and Others by Aline SmithsonJune 1, 2016 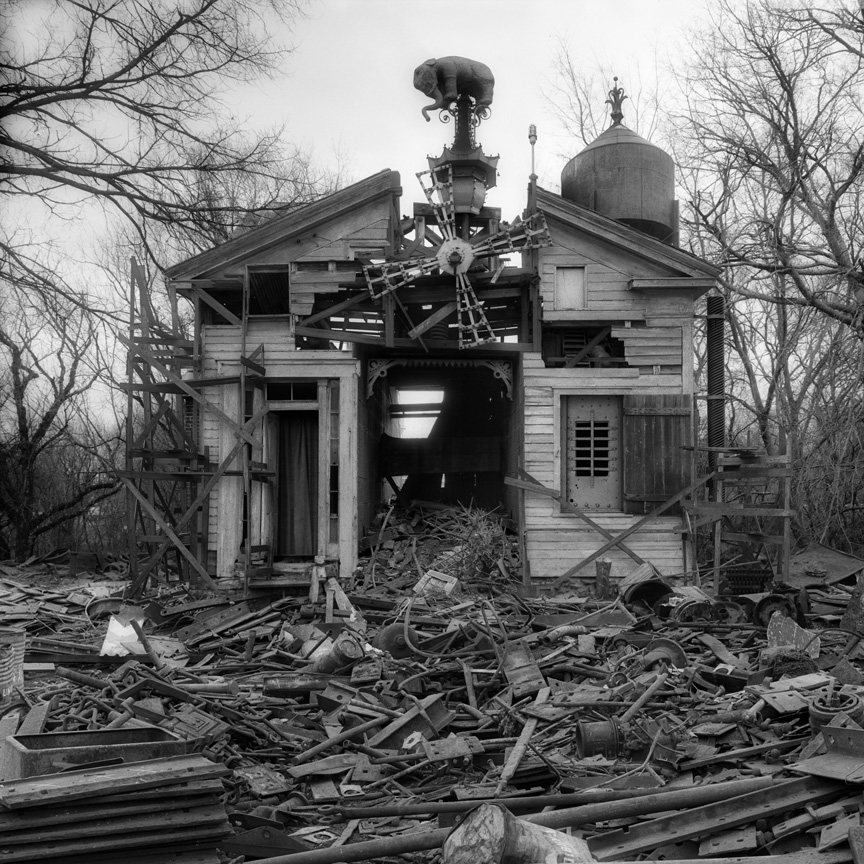 Jim Kazanjian’s surreal photo collages appear to be the abandoned sets of a Mad Max movie or perhaps the homes that Burning Man participants might own, all created with the focus of a Mad Scientist. None of his work has been created in camera, instead he reconsiders and re-purposes imagery found on the internet and the result is other-worldly and magical. Jim will have an exhibition of his work at the Jennifer Kostuik Gallery in Vancouver, Canada opening June 11th and running through July 12th, 2016. 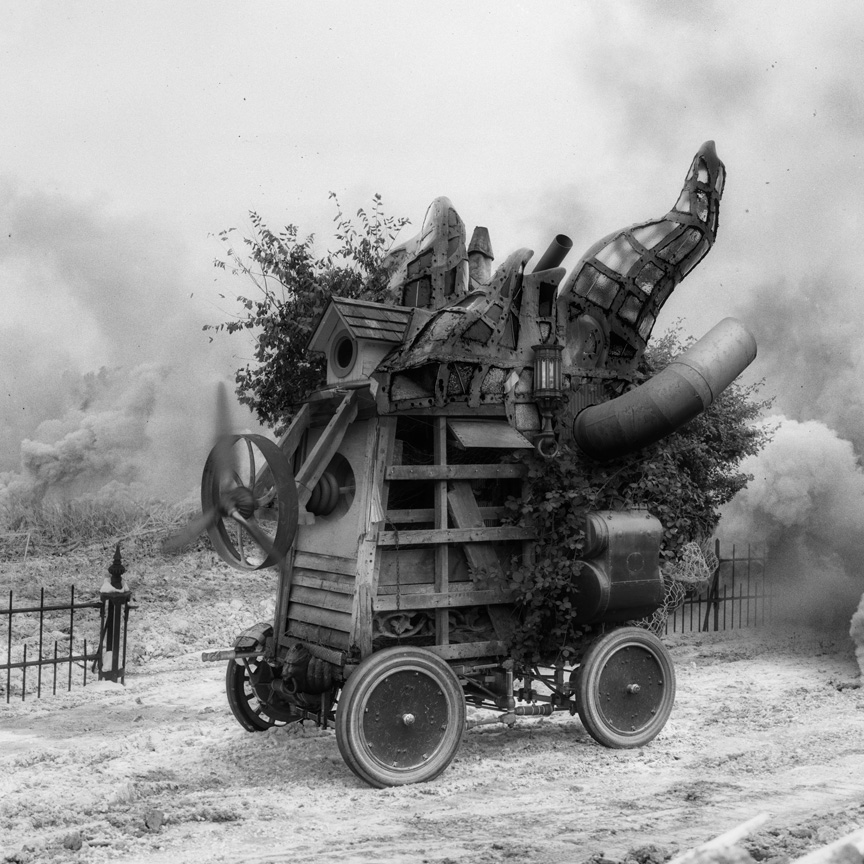 Aberrations, Anomalies and Others 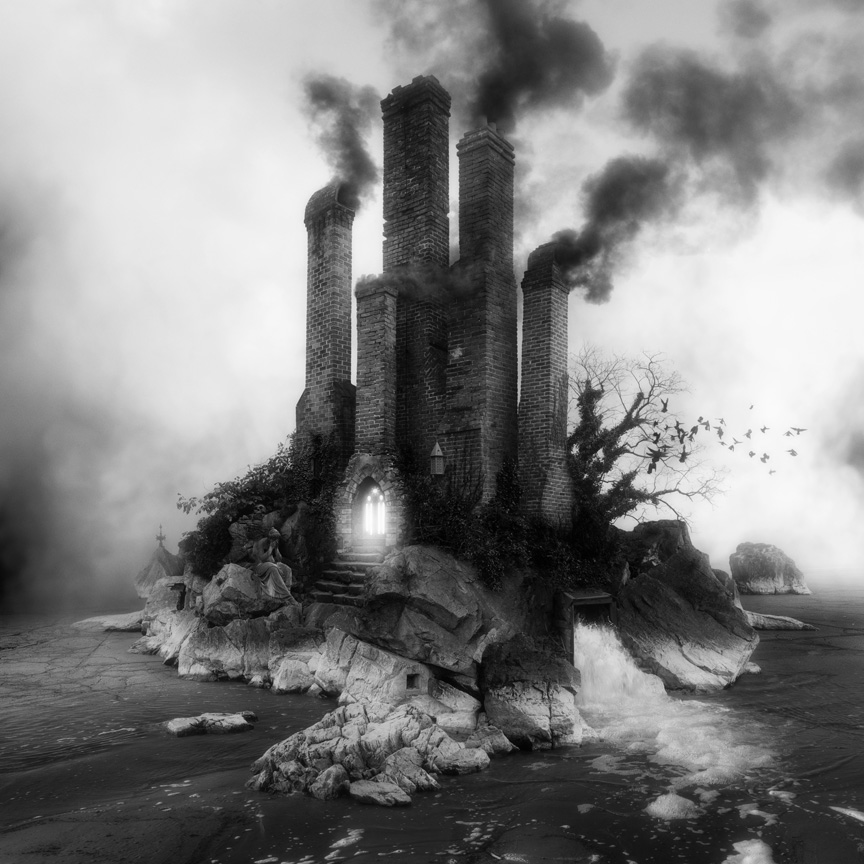 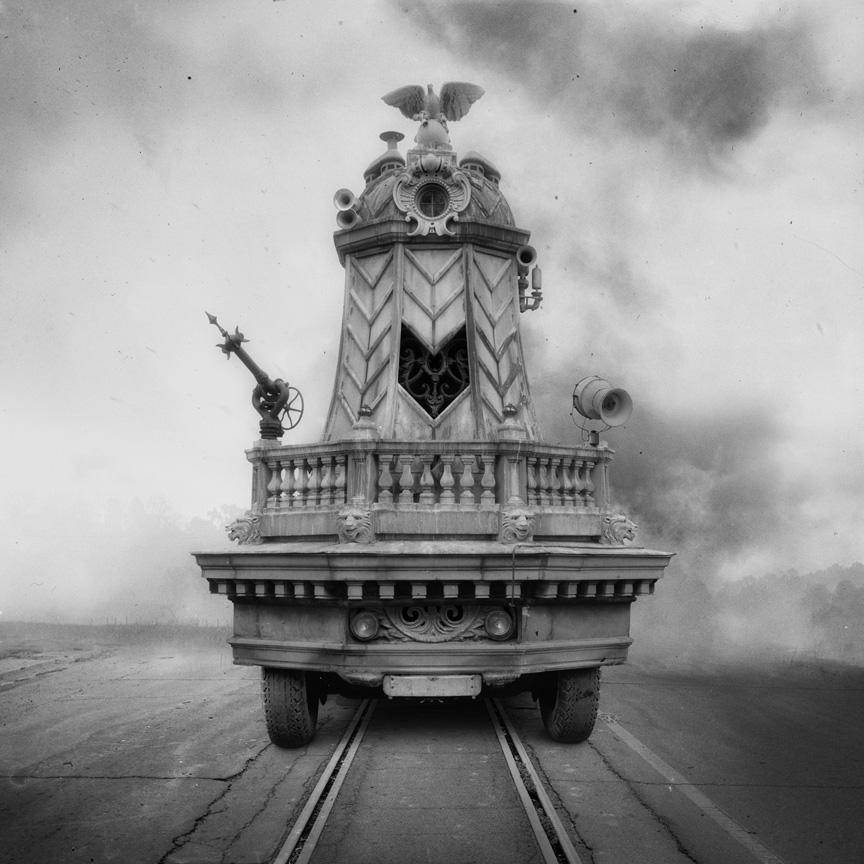 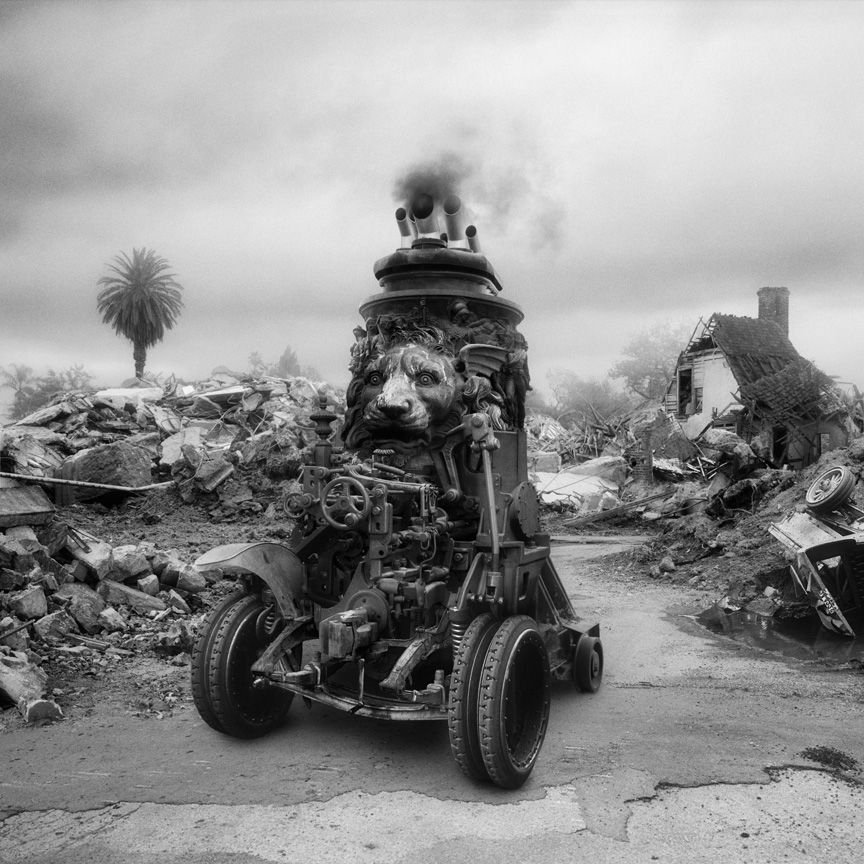 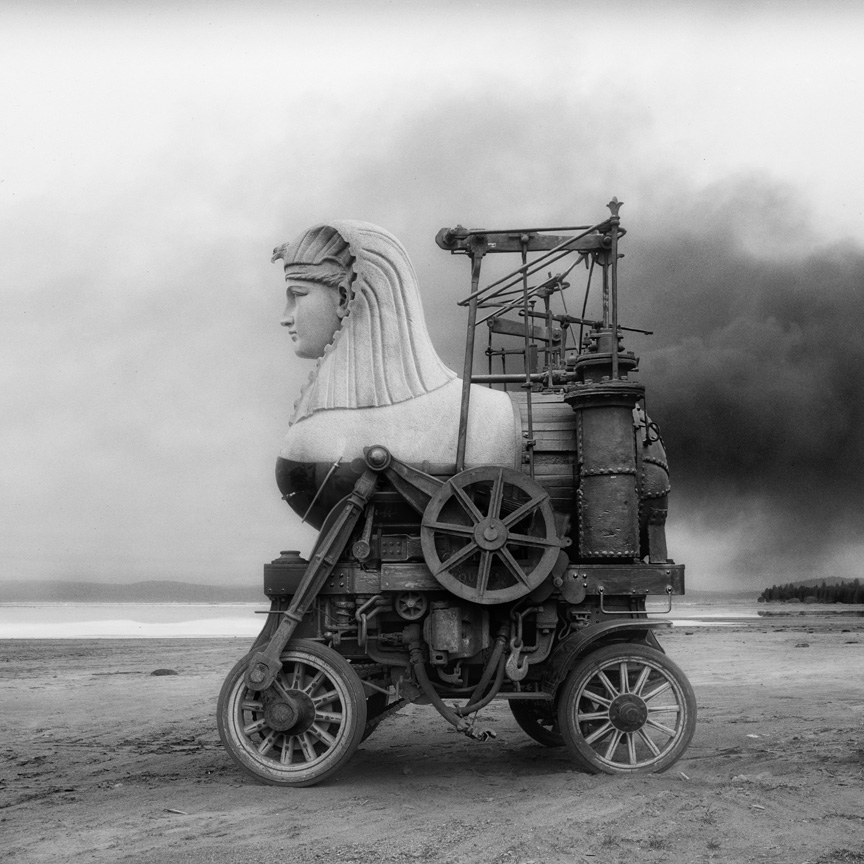 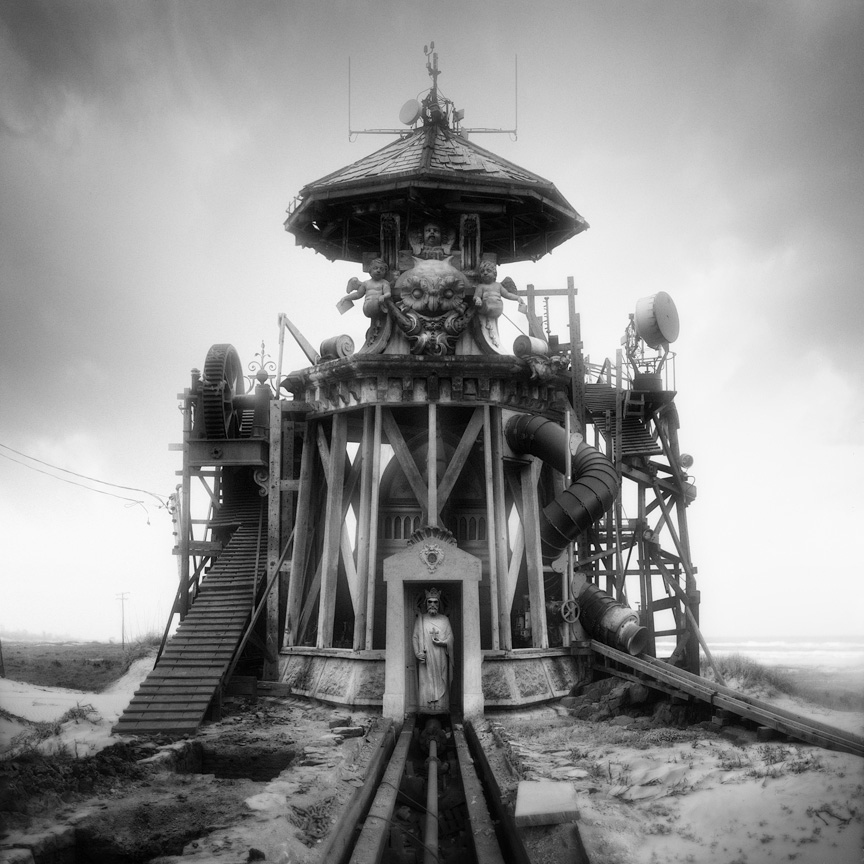 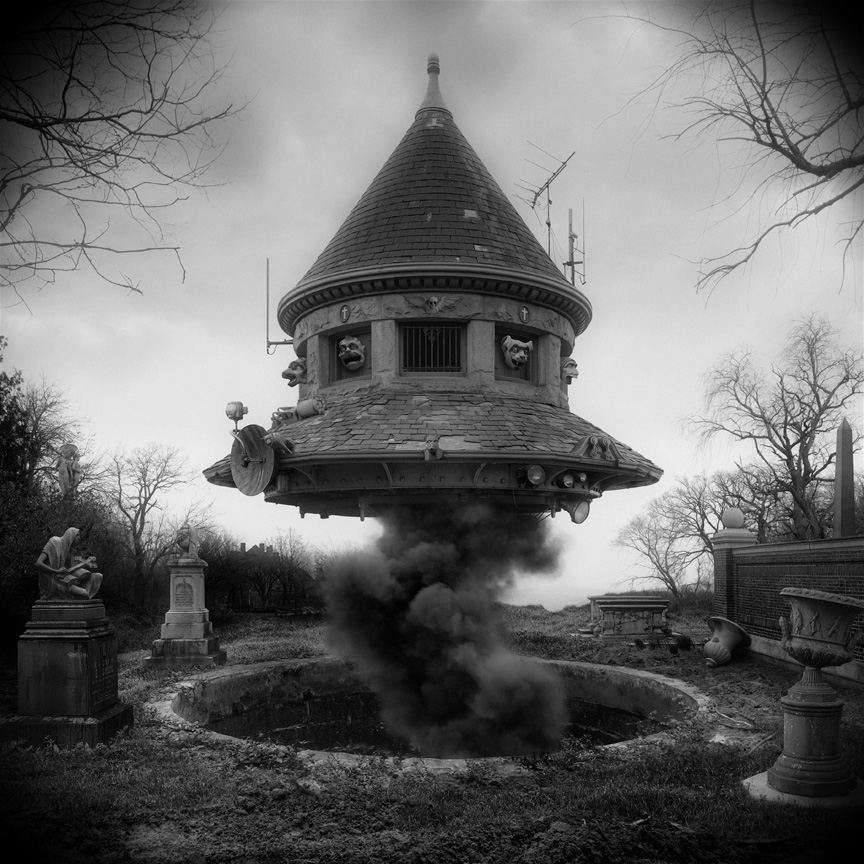 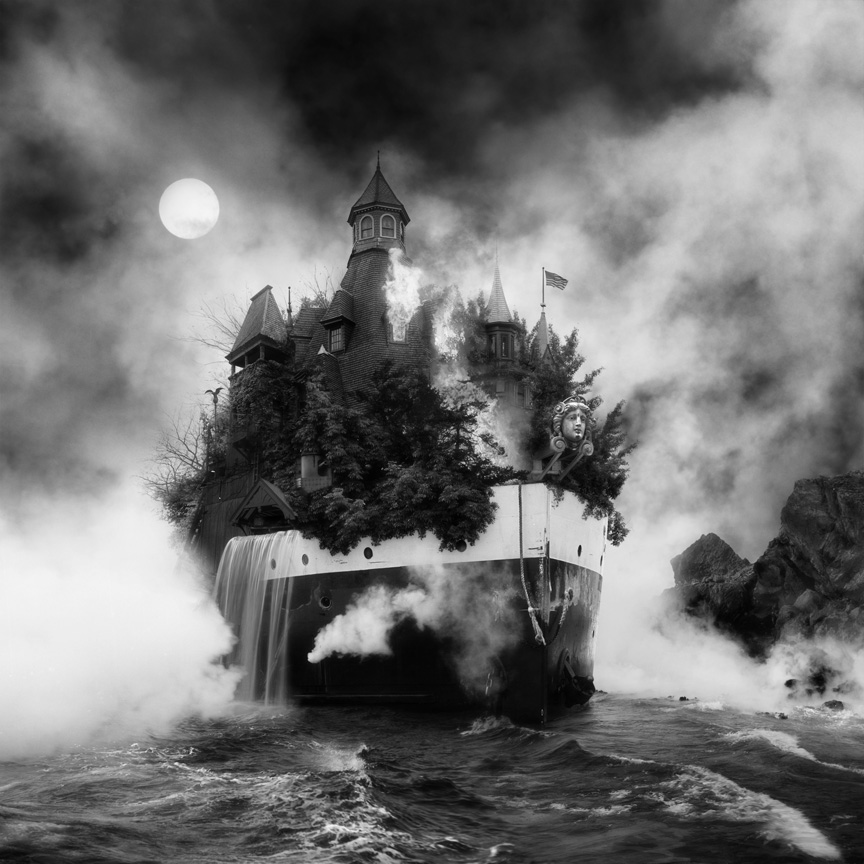 Sharing an Interview that appeared the German publication, Schwarzweiss Photography Magazine in
February 2015….

You are working as a successful CGI artist and computer game producer. How did you discover the medium photography in form of the “hyper collages” that you created in this series?

I started working with CGI in 1992 building graphics for television commercials. I was fascinated with the technology because it had a higher degree of flexibility that was not available with traditional, analog tools. You could approach a project in a very non-linear way. Over the years it became more of a burden than I anticipated. Instead of offering intuitive and adaptive tools, computer animation morphed into this awful monstrosity of a million buttons with obtuse functionality. This was made even worse by having to work inside a “real-time” game environment, where the graphics requirements are very demanding and restrictive. So what had once been “liberating” evolved into this very forced and rigid environment. Of course, a large part of that was dictated by the projects I was asked to work on.

At some point, I made a conscious effort to step back and focus on only the software I thought was really engaging for me, which was Photoshop. The amazing thing about this program is that it has stayed relatively the same after all this time. I believe the first release was in 1990. It has been dramatically improved over the years, but the tools and functionality have remained fairly consistent. Photoshop is basically a program that was designed to build collages.

Classic horror authors such as H.P. Lovecraft or Algernon Blackwood influence your work and many of the images from this series show fantastic and unreal houses and buildings, which are often the settings for classic horror stories. Is this the reason why you chose architecture as your leading motive?

I’m interested in the narrative aspect of architecture and how it unfolds inside the medium of photography. It is almost like a double-immersion. First there is the property of the photograph, which by it’s very nature suggest something tangible in a specific time and space. Then there is the environment within the photograph, the architecture, which is experienced as something removed from the viewer but has the potential to be navigated in a voyeuristic sense. The viewer is able to project themselves into this space. It gets back to the whole idea of the “suspension of disbelief”, the point at which a story becomes so engrossing that the viewer disregards the artifice and begins to ‘live’ inside the narrative.
In the classic horror story, architecture tends to operate as a catalyst for transformation, as well as a departure point into the unknown. There is a displacement that occurs, one in which the familiar suddenly becomes alien. I’m interested in utilizing this kind of literary device to build a photograph that has the potential to resonate at a higher frequency.

You use images from the Internet for your elaborate collages, so in a way you create art by using material that would have been lost in the flood of images we are subjected to every day. Is this an idea behind your procedure?

Its not so much the idea of salvaging lost images. I actually look for uninteresting photos to use because it is important that the origin of the material remain anonymous. Otherwise it can interrupt the homogenization process where I am tying all these separate sources together. I try to sample from things that are not easily identifiable, so I prefer photographs that are very generic and commonplace. The array of images you can discover online now is just overwhelming and I think this is really fascinating. You can search for a very specific element like “gravestone with cross” and get back a flood of photographs. I think of these search results almost like a syntax. All the images are different yet refer to the same subject. They are like adjectives. I assemble these “adjectives” together to form a “sentence” and build my work.

Your approach reminds me a bit of the musical sampling culture especially in electronic and hip-hop music. Are you influenced by art forms, which, similar to you, use existing material in order to create something new?

Yes, I am sampling. My latest work incorporates around 50 to 70 different sources. I select sections from these photos and combine them with pieces from others. The collage works by the Dadaists and Surrealists have always been an inspiration.

You are talking about a cultural misunderstanding in terms of photography, that it has a sort of “built-in objectivity”. What means photography for you as you never use a camera for your images? Do you think that your way of imaging could be the future of photography?

I think of myself more as an “assembler” than a photographer. At the basic level I am just building a digital collage. Though there actually is more to it because I am, in a sense, “synthesizing” a photograph from a collection of photographic elements. I am creating a “new” photograph but without a camera. I don’t see it as a fabricated document but instead something closer to the idea that the photograph itself has now become a kind of “hyper-reality”. The work sets up a visual tension between the content and process. The viewer straddles this area of ambiguity, uncertain as to what it is they are actually viewing – is it real, a model, a collage? So I think this kind of poses a question as to what the true nature of photograph really is. It’s possible that photography, once it went digital, basically disengaged from itself and mutated into something entirely different.

Improvisation is an important part of your work and the result is depending on the available material. But how do you start a new image? Do you have an idea of what you want to create before you start working in Photoshop?

Starting is probably the most difficult part. I usually have a loose idea but nothing very concrete. I just start going through the archive looking for visual connections. In that sense, it really is just a big puzzle. I try to fit stuff together and see where it goes. It is an organic process that has a lot of backtracking and ample use of the “undo” button.

How long does it usually take until you have finished a collage?

On average it takes 3 months for one image. If I’m really focused, I can power through it in about 4 weeks but that really isn’t much fun. Each piece tends to have its own rhythm. Everything flows better if it is not forced to meet a deadline.

The sceneries you create are gloomy and claustrophobic but also appealing and dream-like. Sometimes one is unsure whether to feel scared by their unpredictability or feel embraced by its otherworldly fascination. What kind of reactions do you usually get from the viewers?

I prefer to have the work hover in that area of ambiguity where one is unsure as to what is going on. It prompts the viewer to engage further with the image. I get different reactions, mostly positive. Writers tend to be more engaged. Some people believe the images are real and want to know where the photo was taken. Photographers generally either love or hate it. Most of the negative responses from photographers usually concern the issue of appropriation.

Your images are so rich in detail that there is always something new to discover. What is your favourite way to showcase your work?

I’m not sure I have a favourite way. Each format works differently and has its own degree of effectiveness. What is interesting though is that the work doesn’t actually become ‘real’ for me until it is printed out. As long as it is only in the computer, I never consider it a finished piece.

Are there any new projects you wish to realise in the future?

I’m hoping to have a book out soon.