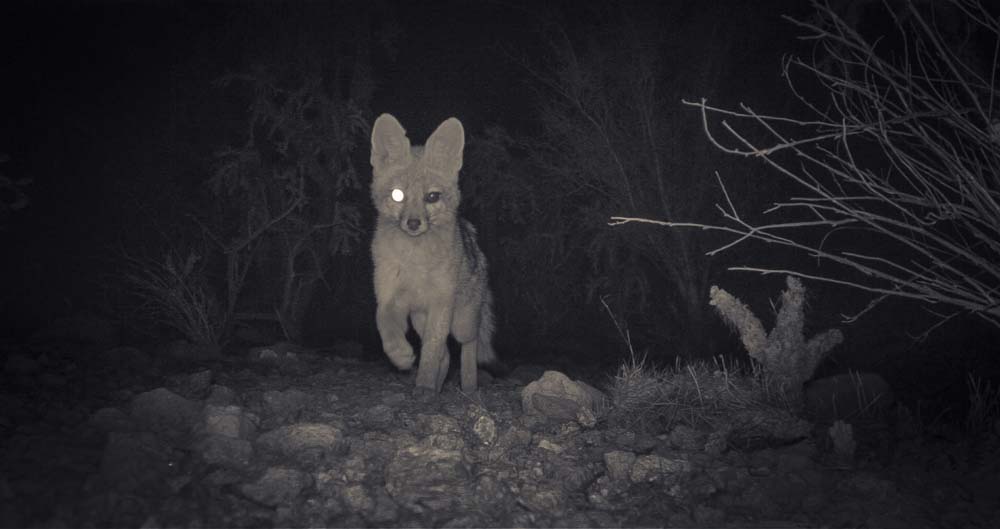 Kate Breakey, a native of South Australia, is a visual artist and educator currently based in the desert outside of Tucson, Arizona. Growing up in a rural country town of Australia, her work has been strongly influenced by the natural world.

In Breakey’s series CREATURES OF LIGHT AND DARKNESS (2010-2013), science and technology were used in order to photograph nocturnal desert animals in the wild. Inspired by the noises of the desert, she captured close up images using a motion-sensing infrared camera typically used by wildlife researchers and hunters. The camera was set up at night in the desert behind her Tucson home. The animals were photographed while walking past the camera, and sometimes looking into the camera.

An intrigue exists in having the capability to see that which is normally hidden from view. Yet, more than a digital capture of their mere physical beings, Breakey presents the viewer with rare glimpses, void of human presence, into real life moments of these untamed creatures of the night.

Kate Breakey is internationally known for her large-scale, richly hand-colored photographs including her acclaimed series of luminous portraits of birds, flowers and animals in an ongoing series called Small Deaths published in 2001 by University of Texas Press with a foreword by noted art critic, A. D. Coleman.

Since 1980 her work has appeared in more than 95 one-person exhibitions and in over 50 group  exhibitions in the US, France, Japan, Australia, China, and New Zealand.

Her work is held in many public institutions including the Center for Creative Photography in Tucson, the Museum of Photographic Arts in San Diego, the Museum of Fine Arts in Houston, the Wittliff Collections at Texas State University in San Marcos, the Austin Museum of Art, the Australian National Gallery in Canberra and the Osaka Museum in Osaka, Japan.

Her third book, Painted Light, published by the University of Texas in 2010, is a career retrospective that encompasses a quarter century of prolific image making.

Her collection of photograms, entitled ‘Las Sombras / The shadows’ was published by University of Texas Press in October 2012.   This series is a continuation of her lifetime investigation of the natural world which in her own words is ‘brimming with fantastic mysterious beautiful.

A native of South Australia, Kate moved to Austin, Texas in 1988. She completed a Master of Fine Art degree at the University of Texas in 1991 where she also taught photography in the Department of Art and Art History until 1997. In 1999, she moved to Tucson, Arizona.

In 2004 she received the Photographer of the Year award from the Houston Center for Photography. She now regularly teaches at the Santa Fe Photographic workshops, and The Italy ‘Spirit into Matter’ workshops.

Her landscape images – selected from a life-time of photographing all over the world – were published by Etherton Gallery in a Catalogue entitled  ‘Slow Light’.   Some of these were most recently shown in an exhibition called ‘Heartland’ at the Art gallery (Museum) of South Australia.   She also works with gold-leaf to produce a modern day versions of an archaic photographic process called Orotone, and also works encaustic wax. 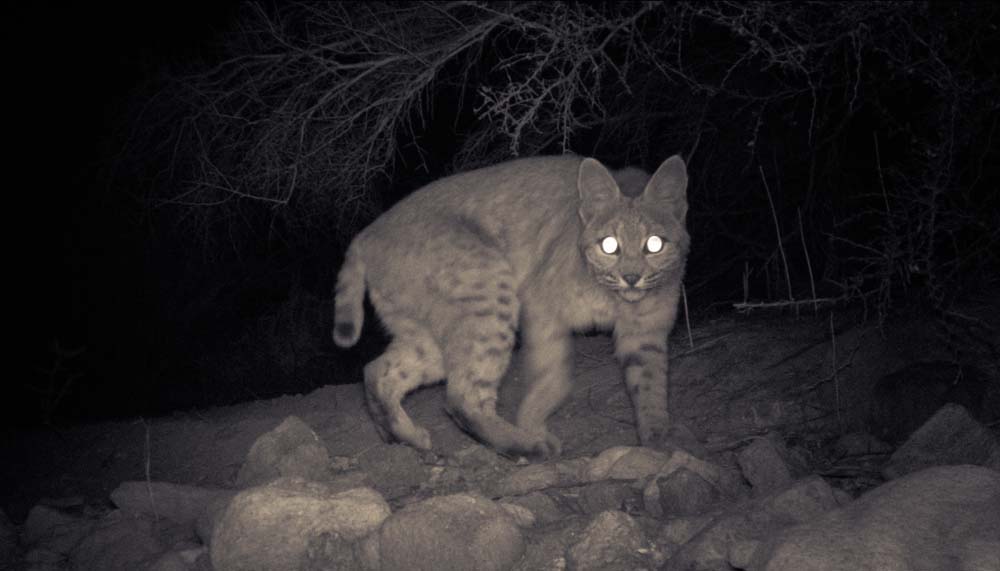 CREATURES OF LIGHT AND DARKNESS

We hear them at night in the desert. The creatures we live with but rarely encounter—out there in the moonlight—grunting, howling, singing, growling. We set up a small camera—motion sensing, infrared, barely visible—to secretly watch as they come and go in the darkness, or on their way home at dawn. We are astonished by the images captured and amazed by our delight in the anticipation of them. Seeing these chance stolen moments, glimpses of wild animals going about their lives. Contact with something raw and real, and beautiful. 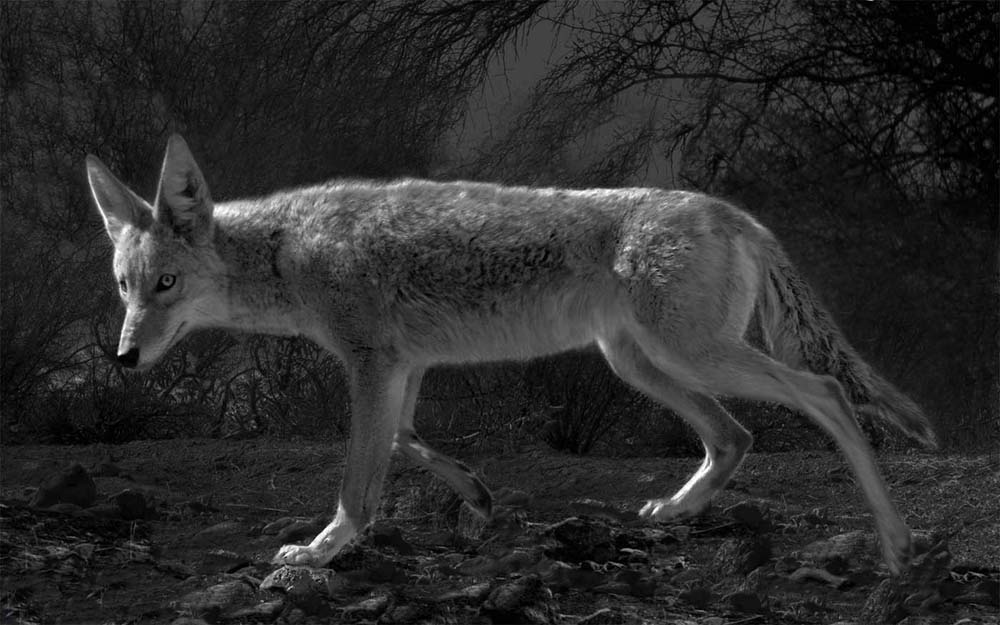 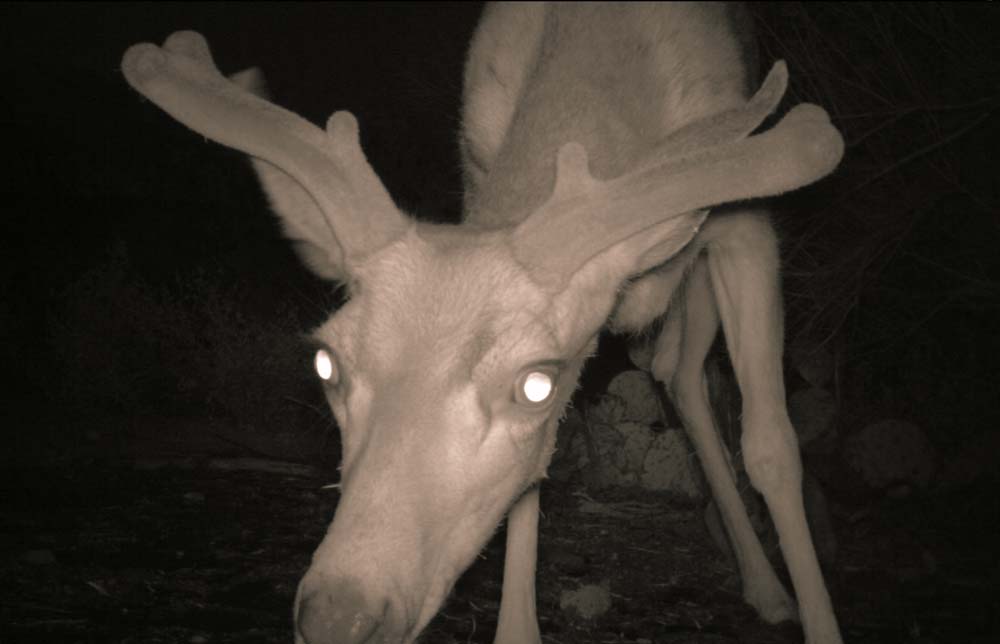 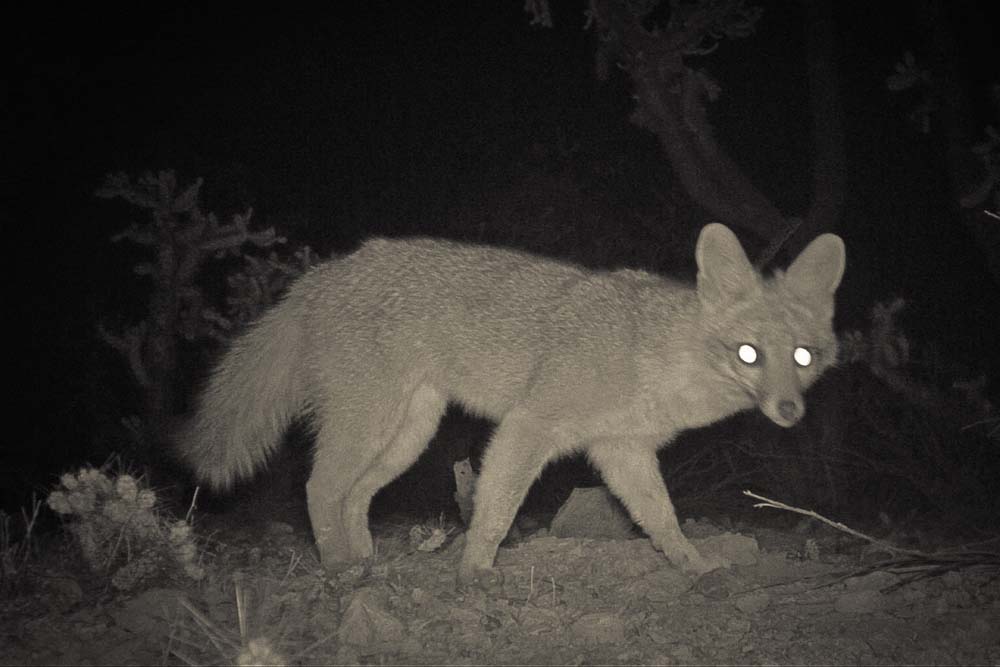 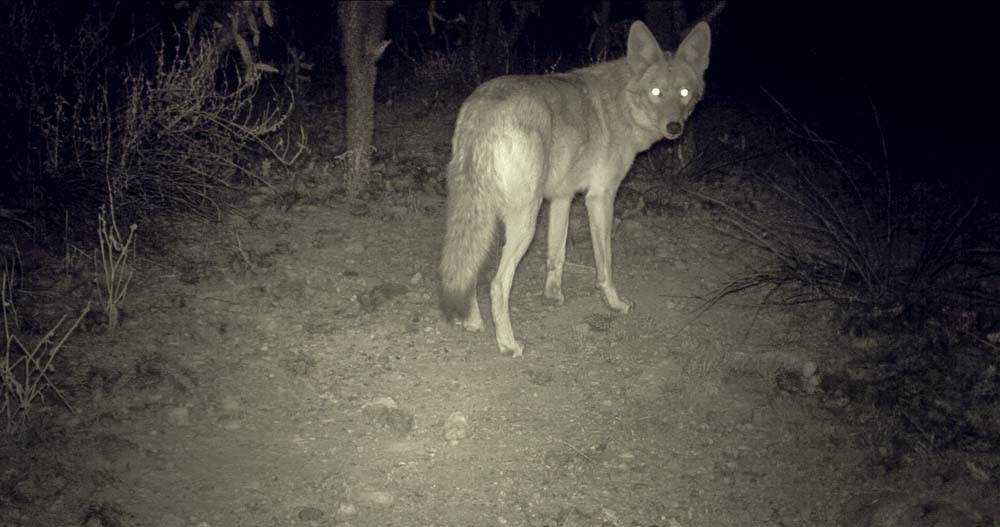 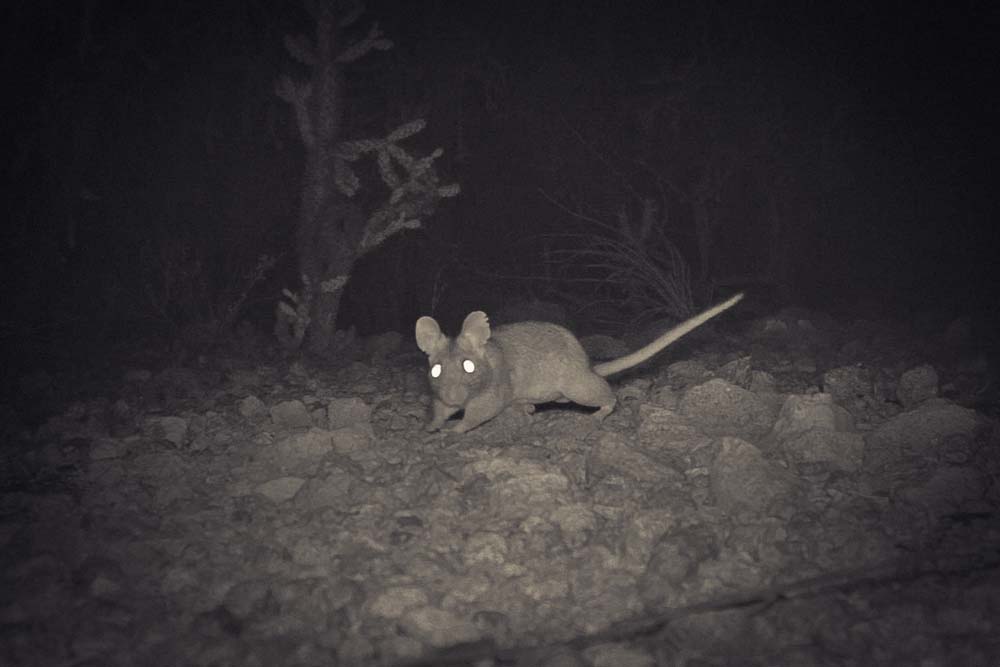 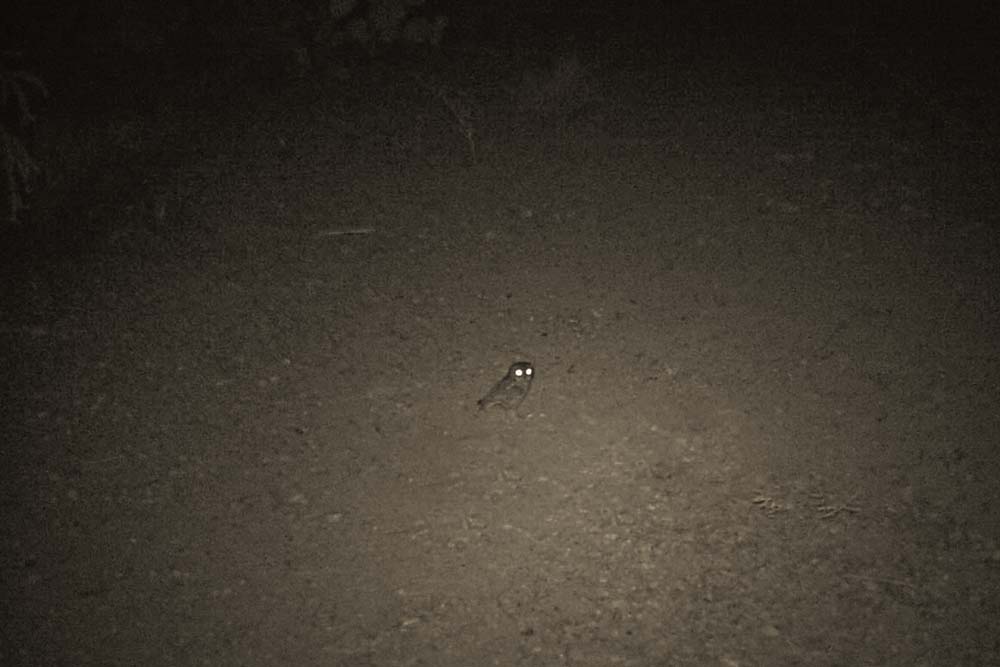 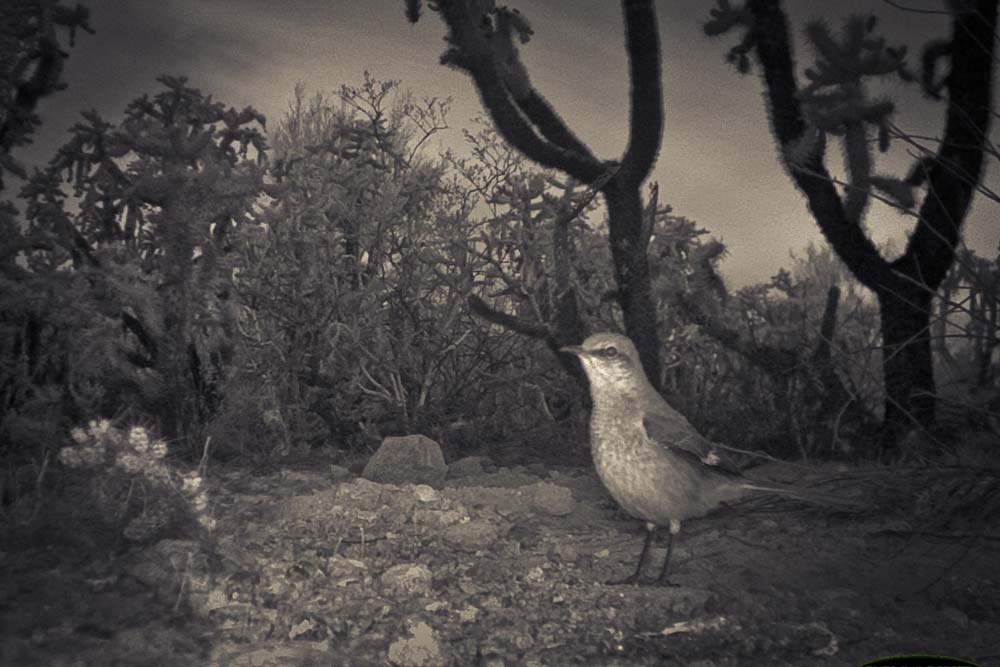 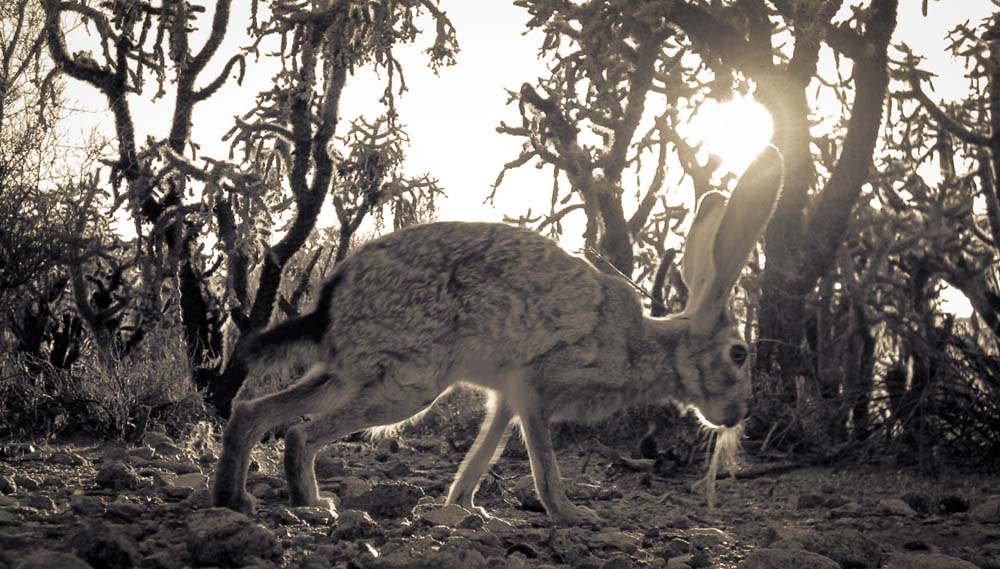 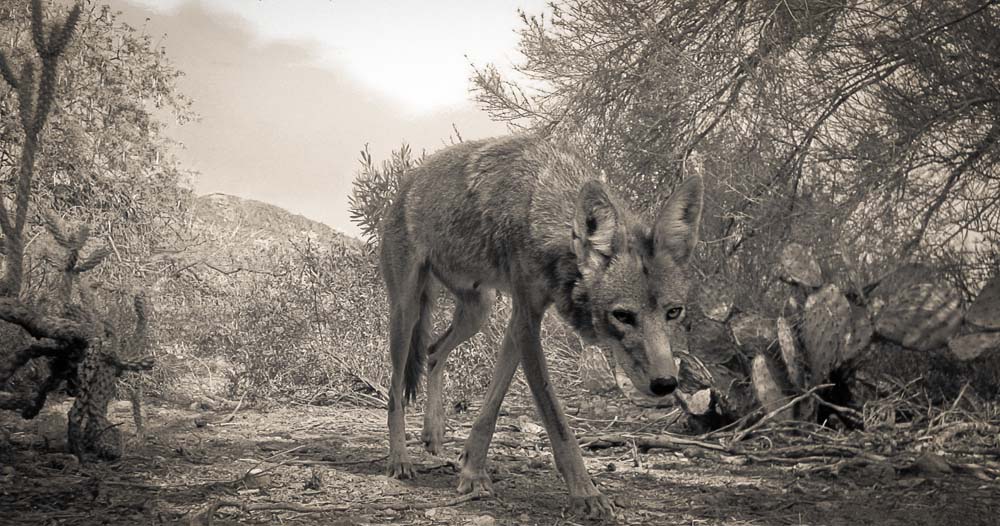 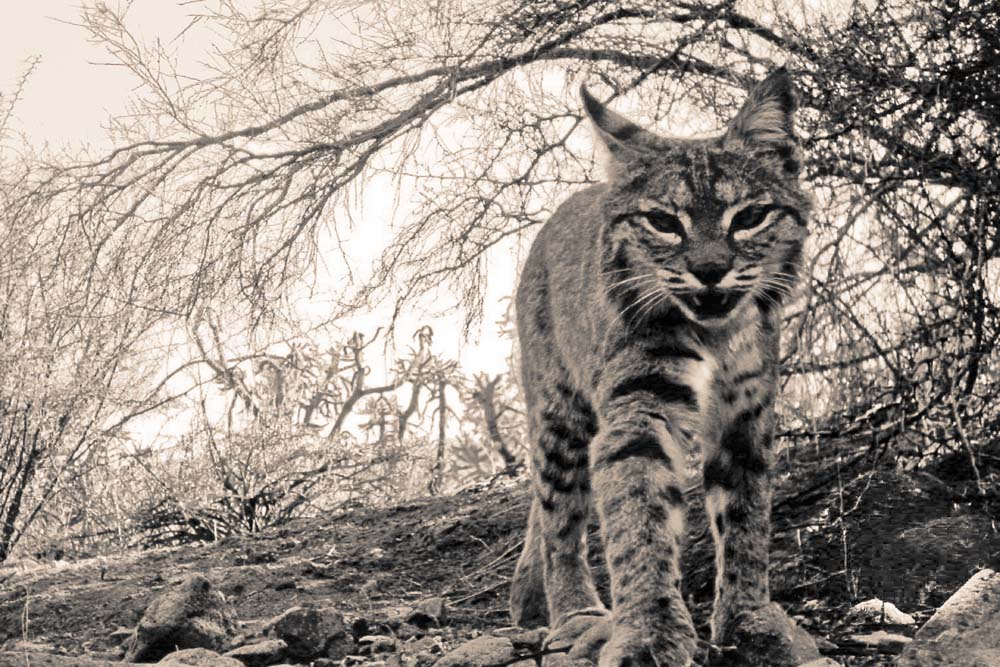