Evan Blaise Walsh: The Space Between Us by Aline SmithsonFebruary 1, 2018 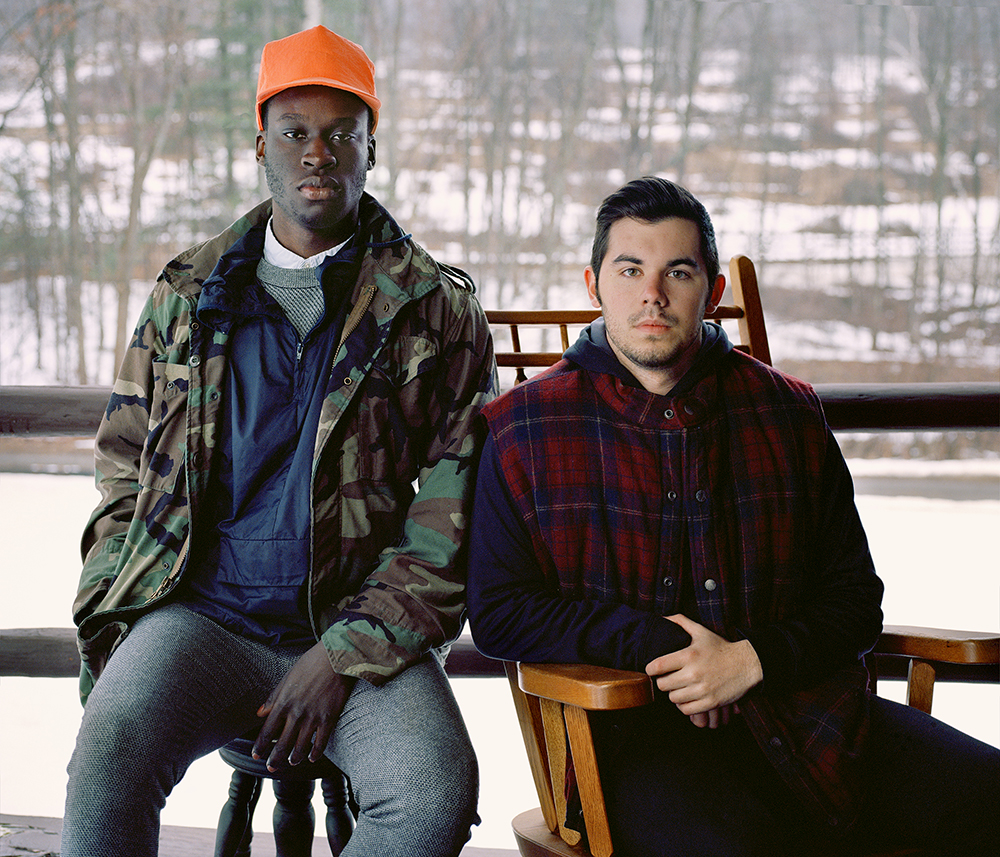 “Growing up gay, I had to be a chameleon or code-reader, constantly metering when it was safe to become closer. Though now our society immensely leans towards acceptance, in my younger years homophobia felt pervasive, especially in the men around me”.

Growing up is not for the faint of heart. It’s a period of trying on, rejecting or accepting various roles and ways of being; it’s a time of insecurity and bravado, and it’s a path to adulthood filled with landmines and wounding, made more complex when you are gay. Photographer Evan Blaise Walsh has created a body of work that examines self in a variety of scenarios, using male friends as collaborators and mirrors enabling him to consider where he fits in and feels authentic. The work also explores the notion of intimacy between men and the universal desire of simply being loved for who you are.

Evan Walsh (b. 1995) is a NYC-based photographer originally from Philadelphia, Pennsylvania. In May 2017, he graduated with an interdisciplinary degree from Emerson College in Creative Nonfiction & Photography.

Evan’s photographic work melds deadpan and environmental portrait styles in order to comment on the construction of masculinity. Mythologies of male intimacy and touch inform his photographic and his nonfiction-writing work, both of which examine the seemingly ubiquitous and invisible barriers between men. Performative and intimate life portraits show men as they really are—lost amongst themselves, looking for connection, and yearning for family.

Evan’s work has been published in Out Magazine and Entertainment Weekly, on book covers for New York Times best-selling author David Levithan and for the creative director of The Hunger Games. In 2016, his photo thesis Paragons was chosen for the Boston Photo Resource student exhibition, and for the annual Boston Flashpoint Festival & Portfolio Review at Gallery Kayafas. In the past, he has interned with Scholastic, VH1, and Anderson Ranch Arts Center. Currently, he works for For Freedoms, the artist-run civic engagement initiative co-founded by Hank Willis Thomas and Eric Gottesman. 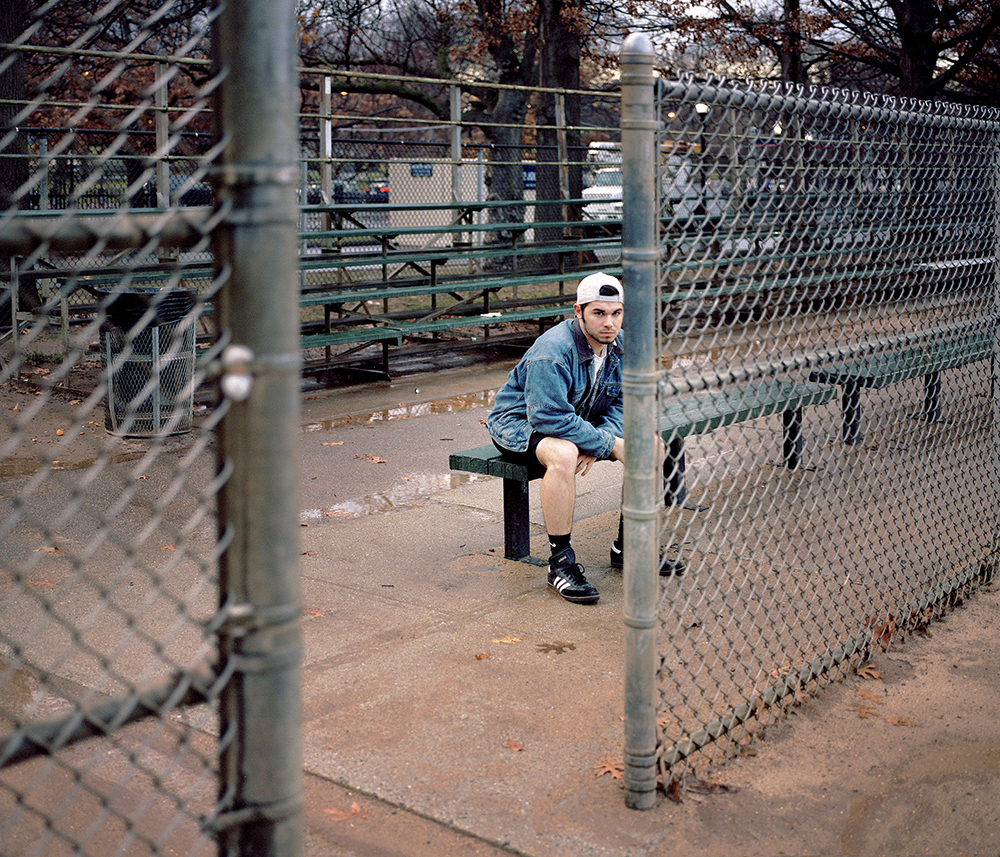 The Space Between Us

Since youth I have spent years over-analyzing my relationship with myself and with other men. Growing up gay, I had to be a chameleon or code-reader, constantly metering when it was safe to become closer. Though now our society immensely leans towards acceptance, in my younger years homophobia felt pervasive, especially in the men around me. It made me fearful of connection; it made me feel like I didn’t belong to myself. Hate existed in my body like a physical manifestation, restricting my confidence, leaving me meek and fearful to touch or embrace.

In search of a bridge to those men whose friendship I both desired and feared came The Space Between Us, a collaborative intimate life project. Asking my closest male-identifying friends to pose with me for deadpan self-portraits in public and private spaces, touching and separate, I explore the potential for connection in spite of barriers between us. We embrace a double-performance as photographic subjects hyper-aware of our representations and as young people acting out our ideas of maleness. 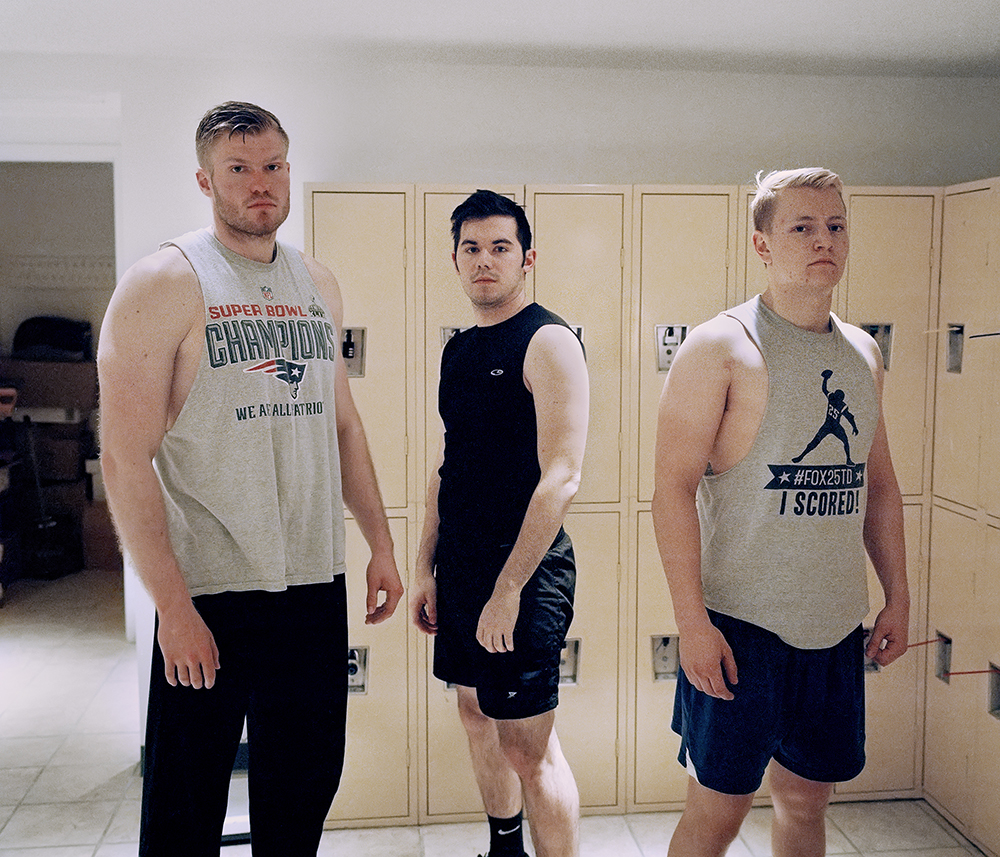 My best friends and I, in this show, morph from ballers to gym jocks to nerds to hunters. That I am allowed to slip in and out of different roles as I please creates tension; I switch from one guise to another, enacting or defying rites of presentation that I’ve absorbed from an early age. Shown through solo self-portraits in the work, this act of wearing manhood has been a game I’ve played my entire life, an act of empowerment, subversion, and in certain spaces, a form of espionage. Through these standalone environmental self-portraits in traditionally “male” spaces, I examine the power inherent to my body, the ambivalence I feel in a patriarchal world, and the impact my presentation has as I blend into—or refuse to choose—the decorations of white, straight-passing privilege. 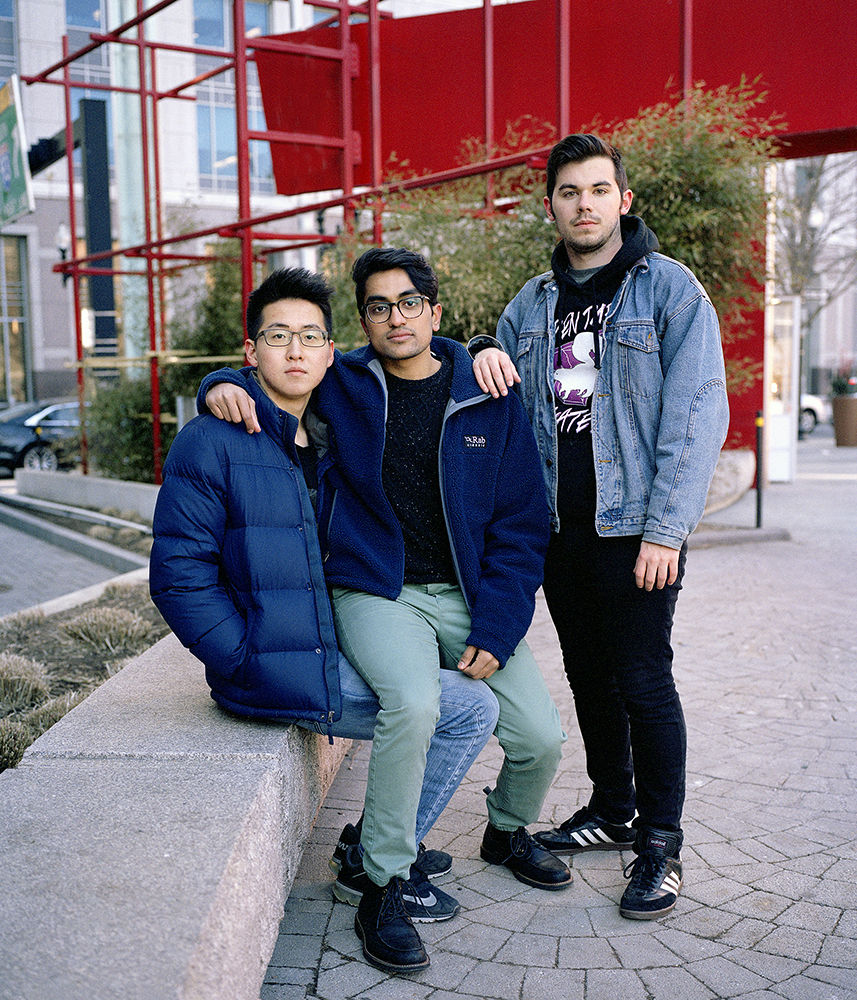 In the style of the fluidity of my self-construction, the photographs encourage the viewer to ask if the optics of male friendship are mutable. As archetypes of masculinity intersect with mythologies of intimacy (which moves are allowed, which are forbidden, which are “gay,” which are “safe”), the work refashions the contexts and arenas in which platonic male intimacy is acceptable or even plausible. The portraits subvert societal perceptions of desire, family, touch, and companionship, prompting us to alter our visual archive of male intimacy in order to include new paradigms. Behind all rites and rituals, the images illustrate just how much the men in my life—and myself especially—are longing for love. – Evan Walsh 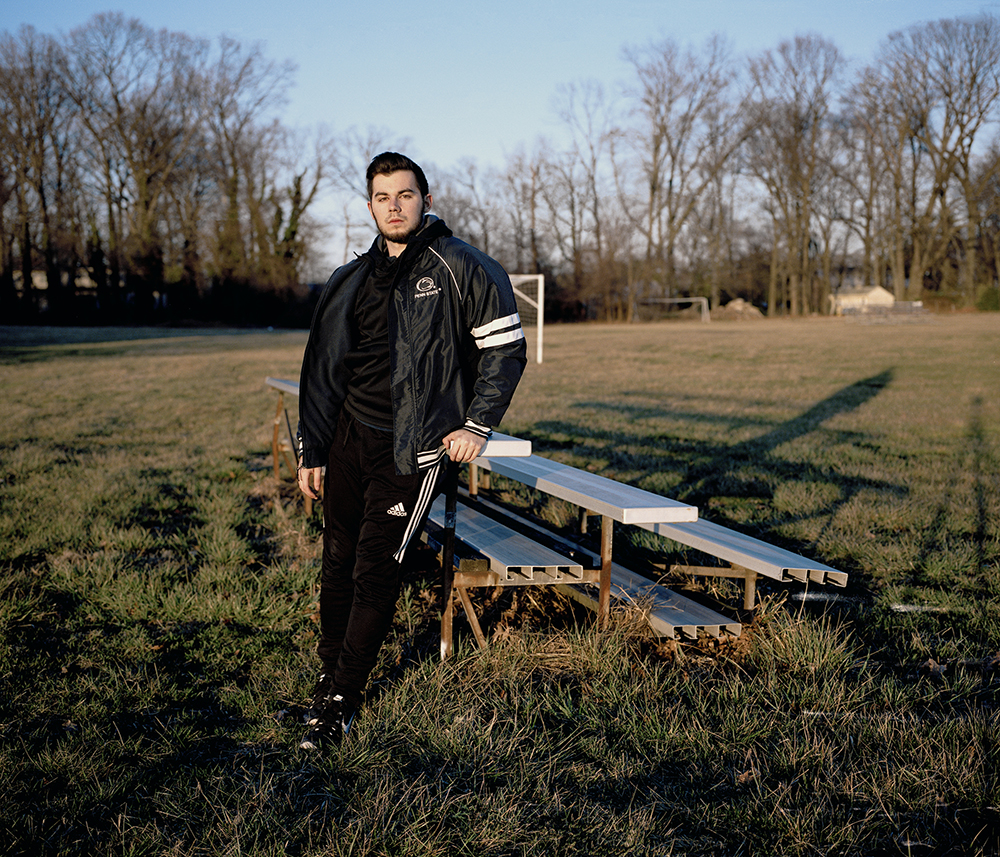 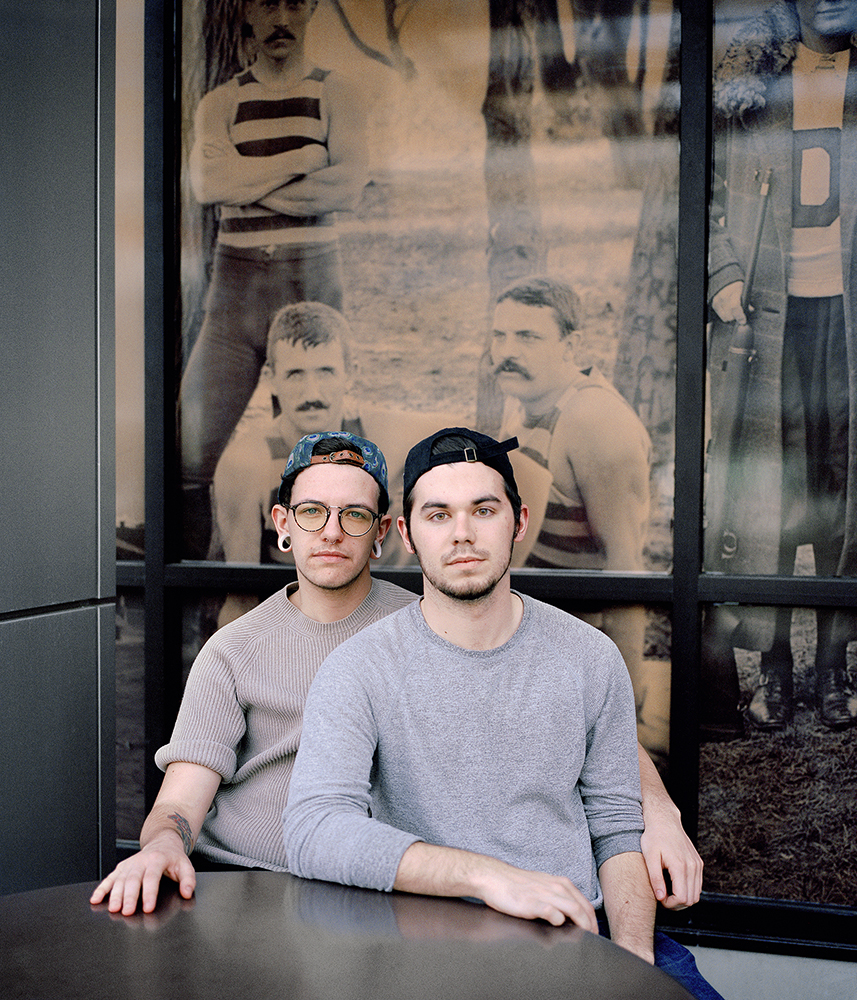 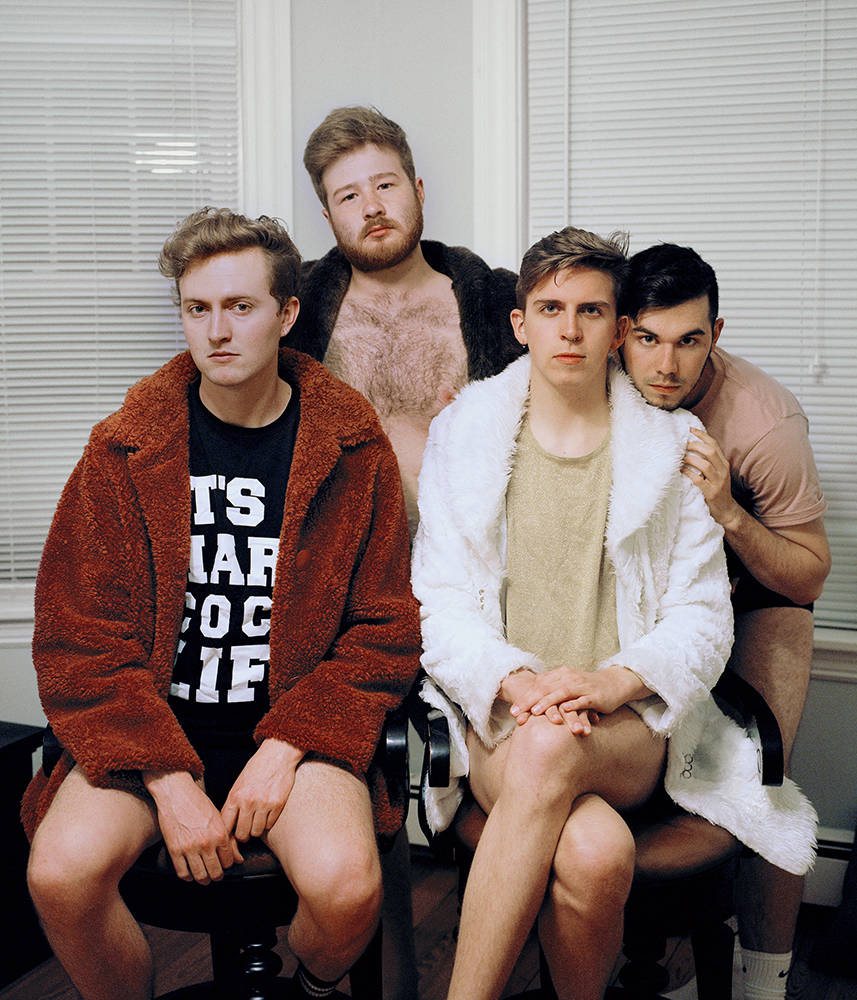 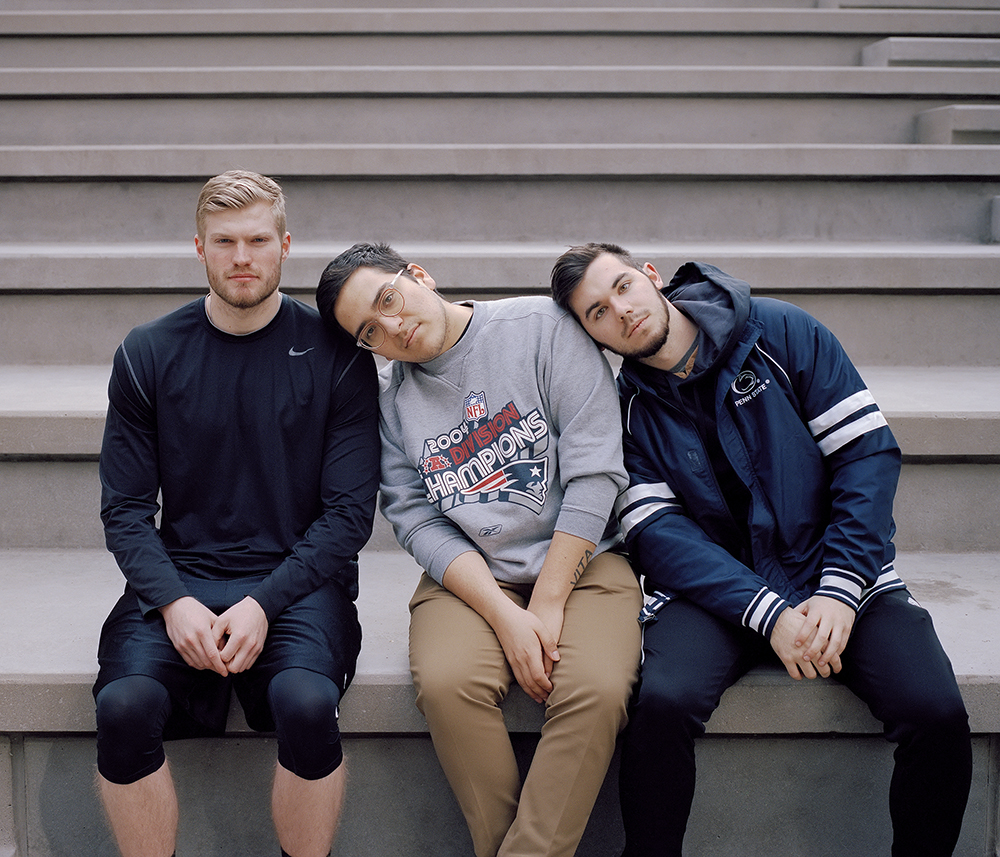 ©Evan Walsh, Logan, Sebastian, and Me 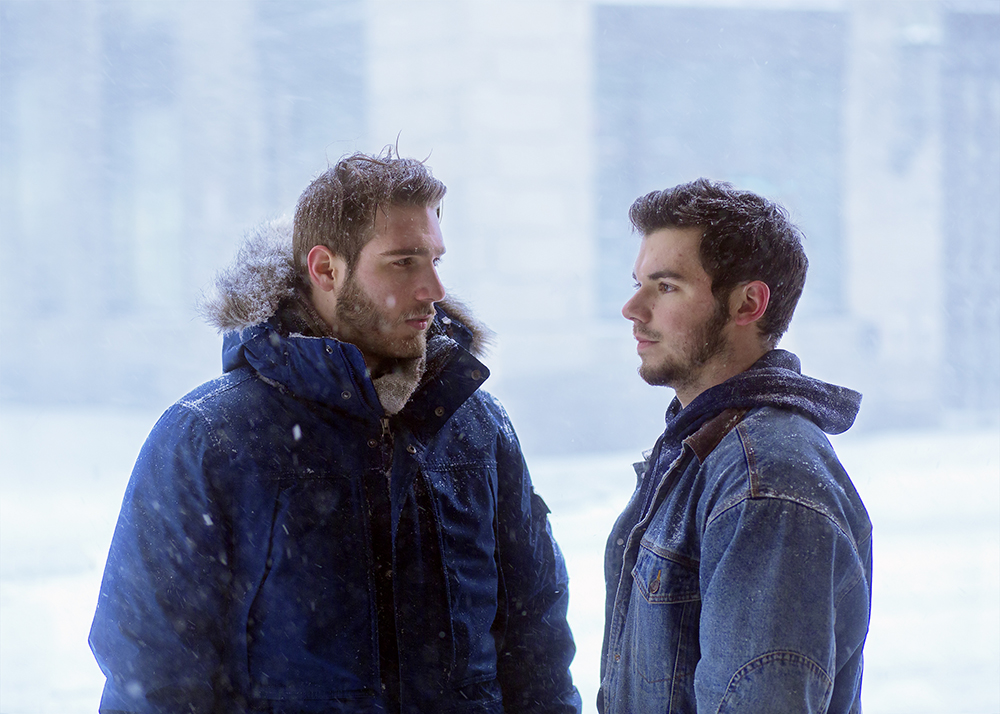 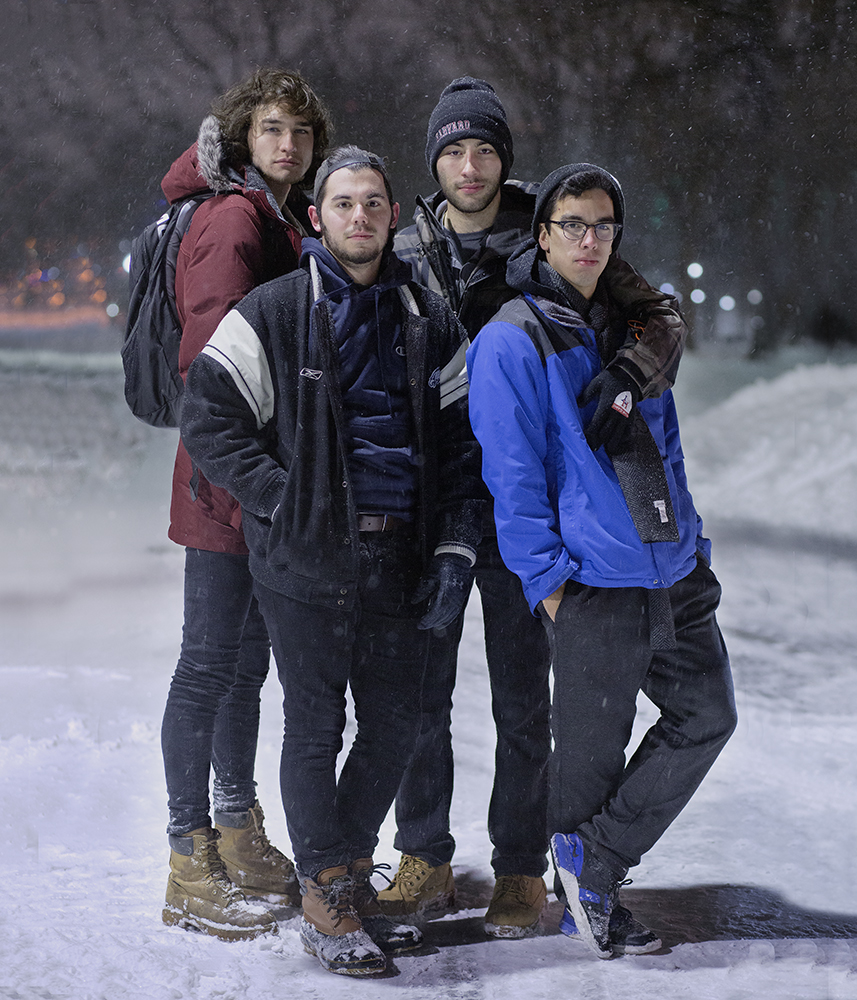 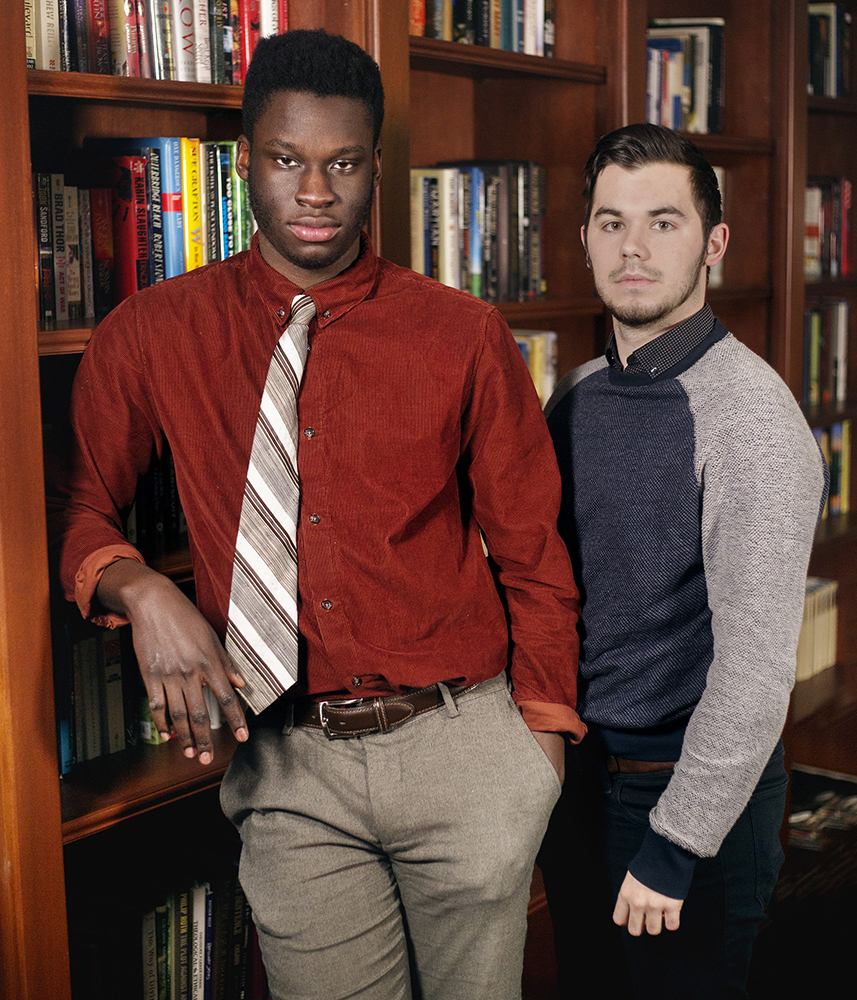 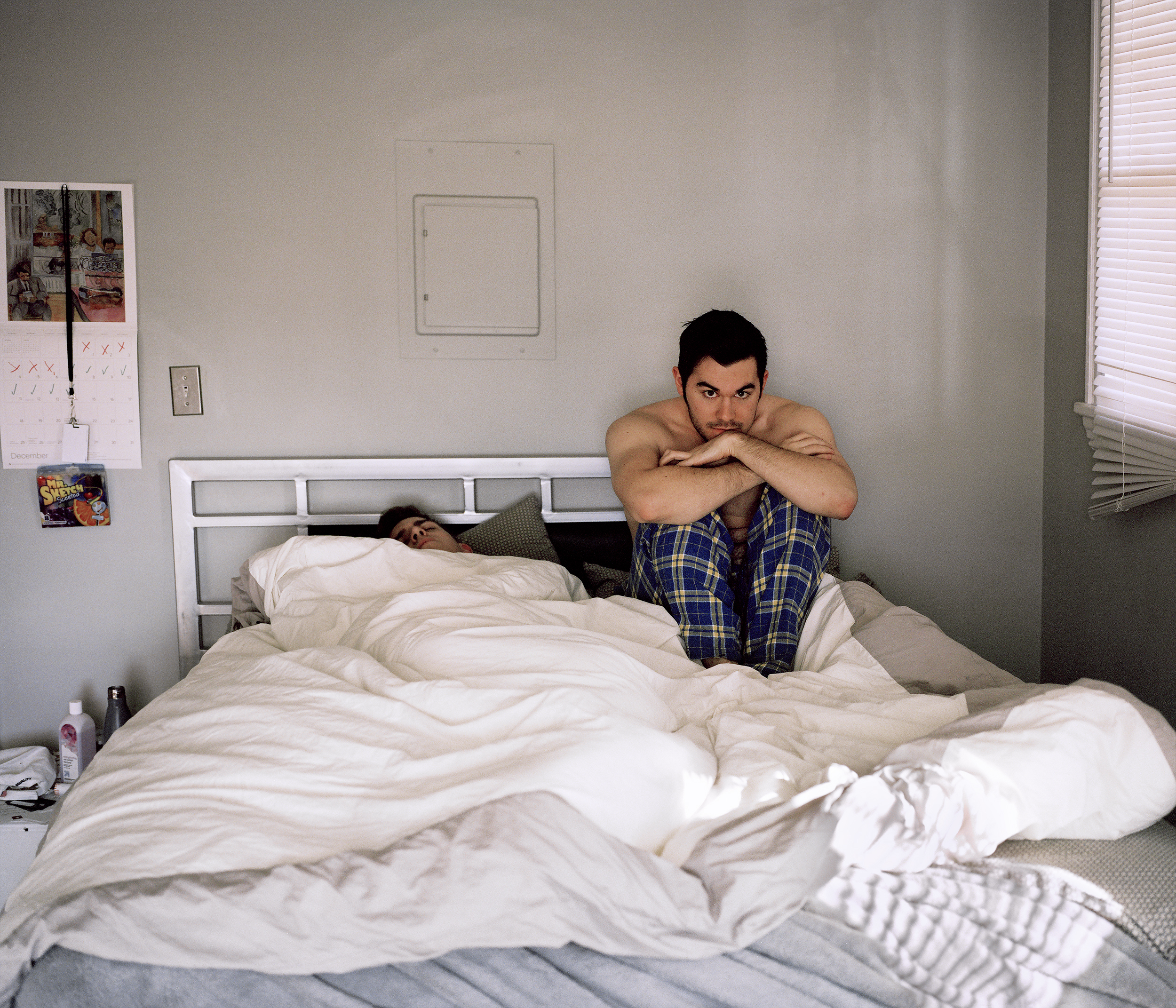 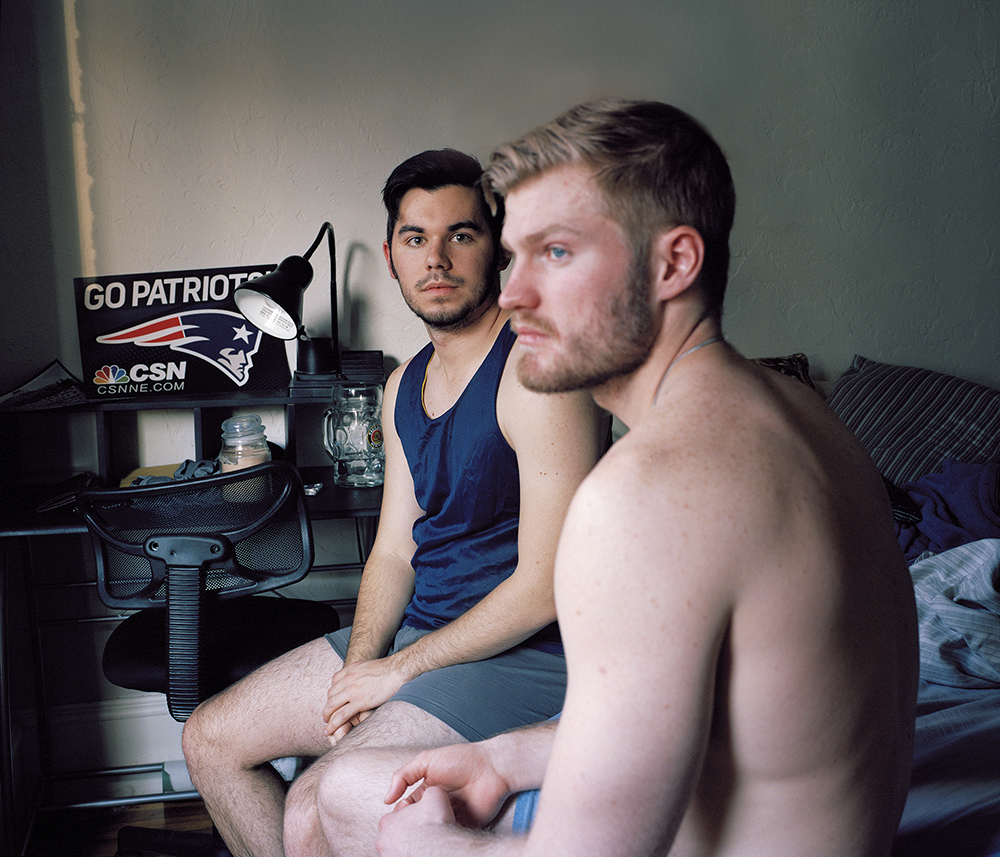 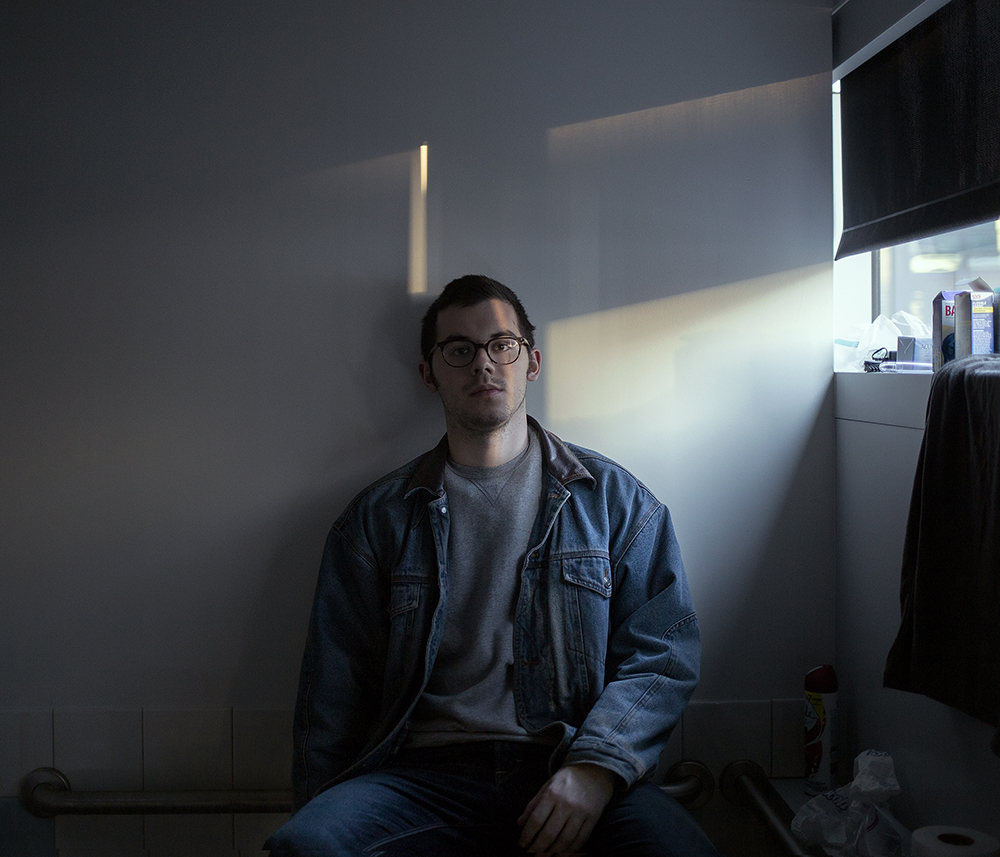 NEXT | Lauren Semivan: Door Into the Dark >
< Priya Kambli: Buttons for Eyes | PREV