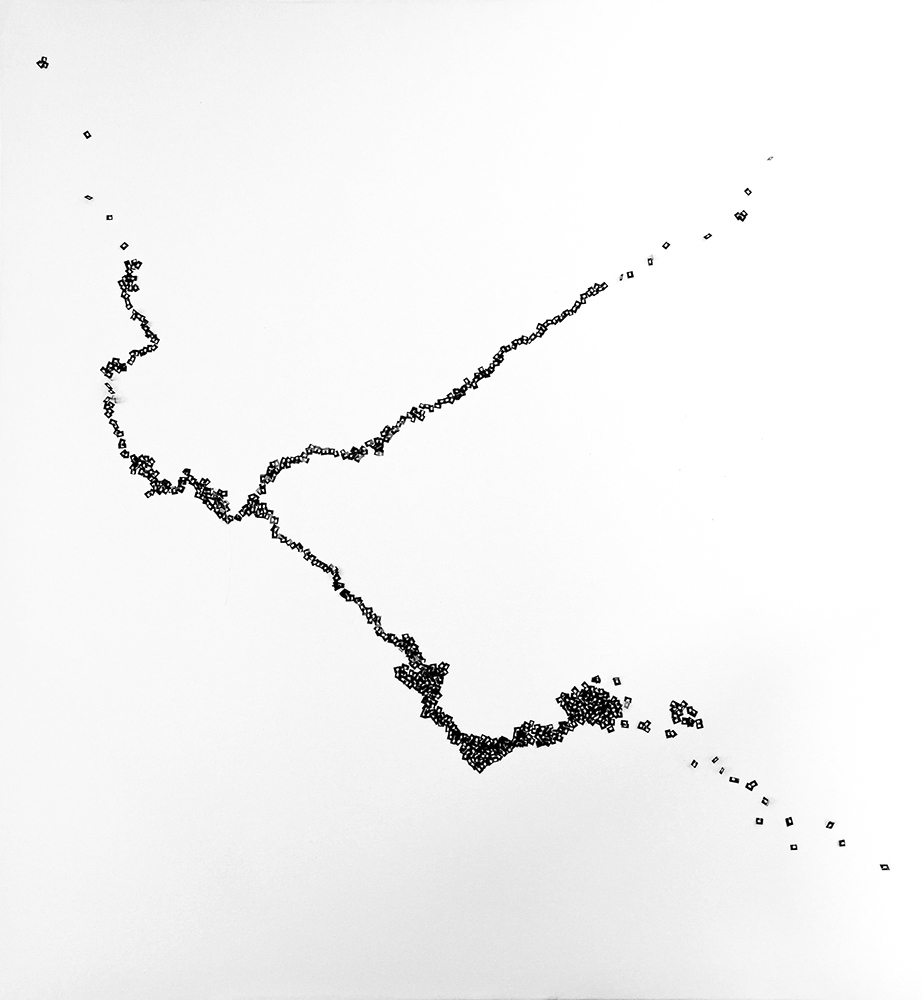 Bennie Flores Ansell is a photo-based installation artist and educator living in Houston, TX. At 6 months old, she immigrated to the United States from the Philippines. Influenced by her family’s arduous trek over land and seas to get to the United States, her work has evolved to encompass the theme of migration patterns of people.

In her series 1 DPI MIGRATION, Flores Ansell creates visual and tactile moving formations. Using a variety of objects including deconstructed slide film, quilting pins and cut film sprockets, she creates large-scale site-specific wall installations. From a distance, the art pieces mimic migration patterns and swarms. Up close, the installations consist of hundreds of small, suspended circular images cut from obsolete art slide libraries. Light plays magic as the installations transforms from phenomena of natural science into micro projections that reflect the history of art. There is a never-ending cycle in which art becomes science becomes art, forever interchanging those boundaries.

Flores Ansell was awarded a Fellowship at the Houston Center for Photography and the National Graduate Seminar at the American Photography Institute at New York University in 1999. In 2000, she was selected from the fellows of the previous ten years to return to NYU, to study and discuss the shifts occurring in photography, specifically the impact of digital imaging.  In 2003, she was awarded a Cultural Arts Council of Houston & Harris County Artist Grant.

Her work has been exhibited at The International Center for Photography, NYC; Seattle Art Museum; and The San Diego Museum of Art as part of the Only Skin Deep Exhibition curated by Coco Fusco and Brian Wallis. Her work was also included in the group show Inside Outside: Texas Women Photographers curated by Anne Tucker and Clint Wilour. Other select exhibitions include “Bug Out of the Box: A New Look at the Contemporary Art, History, and Science of Bugs” at The Berkshire Museum of Art, “Crossroads” at Galveston Arts Center, The International Juried Exhibition in New Jersey juried by Susan Kismaric of MOMA & “Silver” Houston Center for Photography’s 25-year retrospective exhibition.

2016 and 2017 brought an array of exciting new exhibitions nationally and internationally for Flores Ansell. In 2016, Flores Ansell won a 2nd place award in The Houston Assistance League juried show by Brady Roberts, Chief Curator of The Milwaukee Museum of Art. In the summer of 2016, her video “Sprockets Keep Moving” was featured in Festival De La Luz, a photography festival in Argentina. The fall of 2016 brought her to Korea, where she created the site-specific installation titled 1 dpi Migration for the Encounters IV exhibition in the Daegu Photography Biennale.

In 2017, she was commissioned by Institute of Contemporary Art in Boston to design an interactive public piece titled “Fish Out of Water” for the educational space Art Lab based on migrations of people to the United States. Uno Art Gallery in Stuttgart, Germany also featured her site-specific Diafilm Installation. Her work was also included in “Visceral Notions” at The Center for Photography in Woodstock, New York and the Fotofest exhibit titled Re/Thinking Photography
: Conceptual Photography from Texas.

Flores Ansell’s work is held in many private collections. Her work is also collected as permanent Public Art pieces on display at the University of Houston and in Downtown Houston with the Houston Arts Alliance Wayfinding Signs Project. 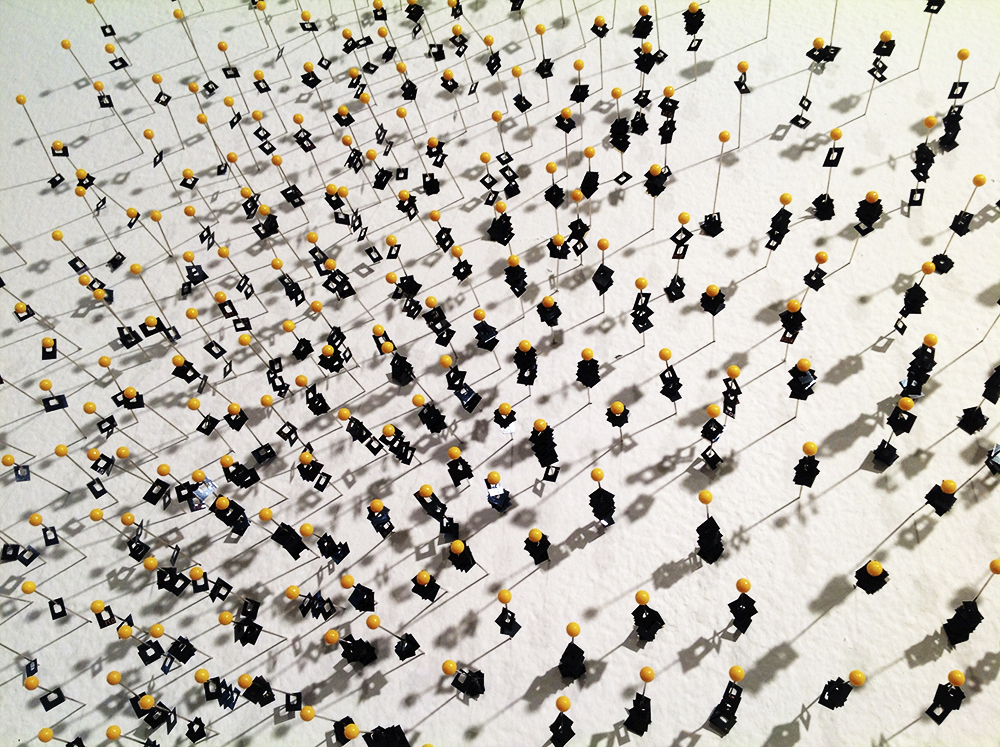 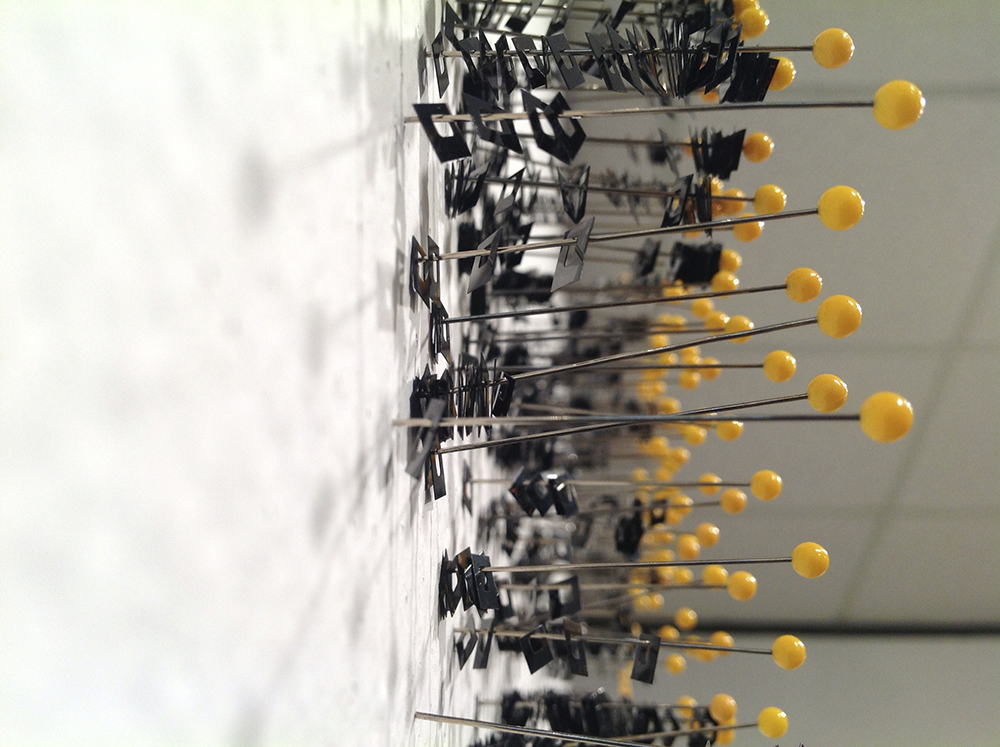 My current bodies of work express visual representations of migration patterns and swarms created with deconstructed slide film.   The work also utilizes mirror projections that reveal photographic objects in projected light that are photographed and printed on dye infused metal.

My art is an exploration of the migration of Film Photography and its evolution toward Digital Photography. Digital imaging made the film sprockets and their purpose to move film in the camera obsolete.  I first videotaped the hand cut sprockets moving, sewed them to canvas as well as install them on the wall in patterns mimicking murmurations of birds in flight.  The timeline strands consider a sprocket from the 50’s being adjacent to one from the 70’s, making time non-linear in the strands, the decades represented as well as the fraction of a second it takes to shoot the image, all in one object. 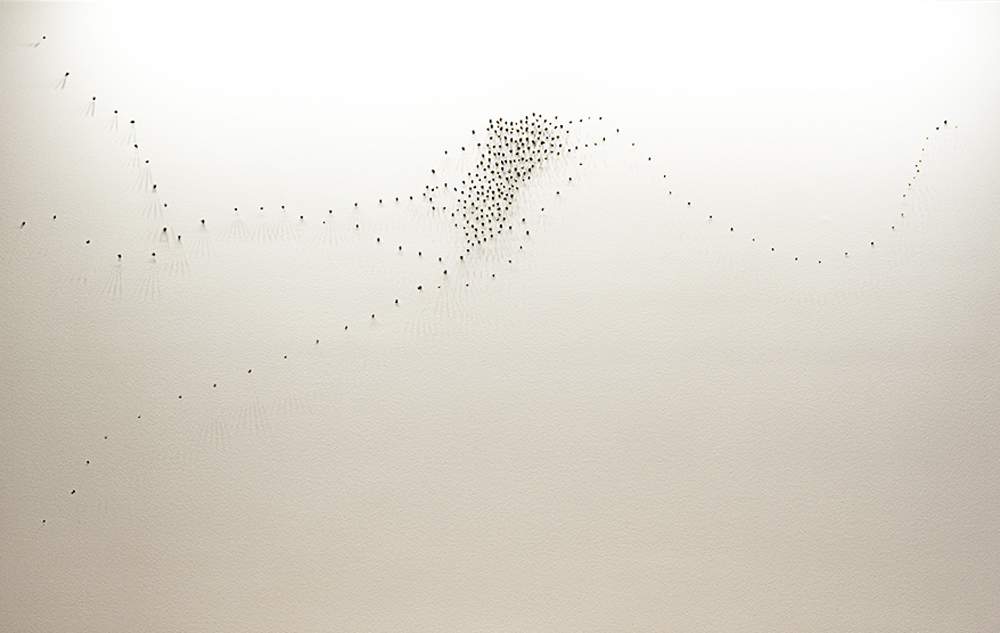 The deconstruction of Slide Film continues as I create 1-inch dots from the images on the film, 1 dpi or 1 dot per inch.  The 1 dpi installations attempt to make sense of the cacophony of images we are bombarded with every day. The dots reference a single dot in digital printing (a small part of a larger whole) but the images on the dots represent large concepts and histories.  The dots start to be an infinite loop of small and large.  The Droste effect is at play to a degree in the 1 dpi installations, where a picture appears within itself.  The installation viewed at a distance, show only color and shape, but when viewed closely reveal the images of art objects.

In addition to the dots, Variable Contrast Filters and mirrors, other artifacts of Film Photography, are utilized in my installations creating projected light on the wall.  The mirror projections illustrating the interactions of mirror and light are recorded and are made into dye infused metal prints.  These images reference the painter Hans Hofmann’s work with the pictorial plane, spatial illusion and color relationships. 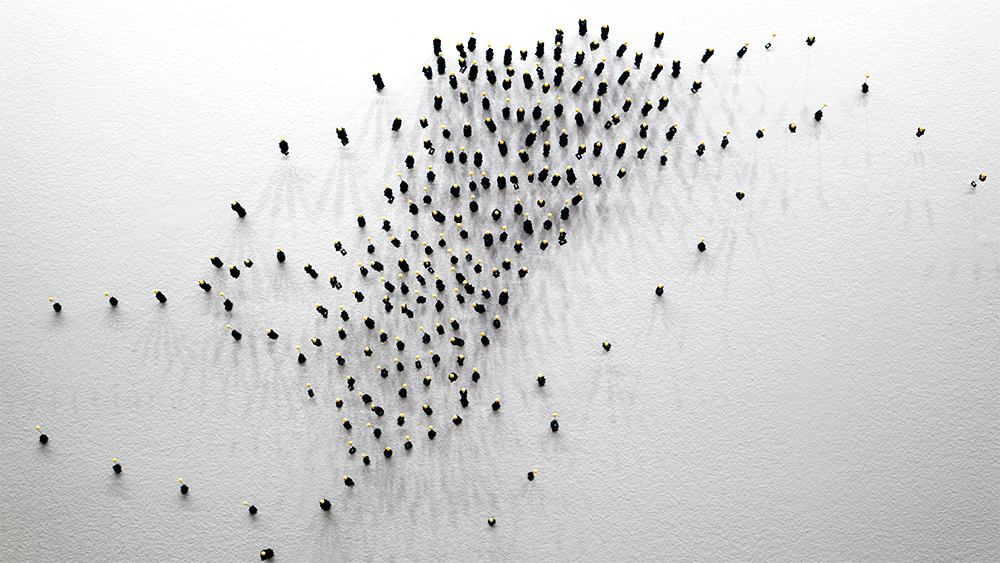 ©Bennie Flores Ansell, Detail of above

My work is evolving in meaning as the forms are now based on Immigration Migration Patterns of People around the world.

The Institute of Contemporary Art Boston commissioned me to design an interactive exhibit in their Art Lab.  They asked me to think of the word “journeys” at the start of the design process.  The piece was to be displayed conjointly with Nari Ward’s exhibition, which addresses migration and assimilation. Immigration is having a major impact on the U.S. and countries abroad. Immigrants can be displaced and flee like a “fish out of water” or migrate methodically like butterflies and birds.  Laser cut stencils of a hand drawn flying fish were produced then used by visitors to trace, hand color on transparency film and cut out to be each person’s unique flying fish.  On the backs of the fish the participants were asked to write their families country or countries of origin.  The fish were then pinned on the Art Lab walls in an arrangement based on actual pathways of current migration patterns of people around the world.  Flying above in the Art Lab were larger than life flying fish made from Mylar. Mylar is the material of the meager blankets handed to frightened hypothermic refugees upon arrival after being rescued from the water.  A reflection of oneself could be seen in the Mylar while looking up to these flying fish in mid-flight. –Bennie Flores Ansell 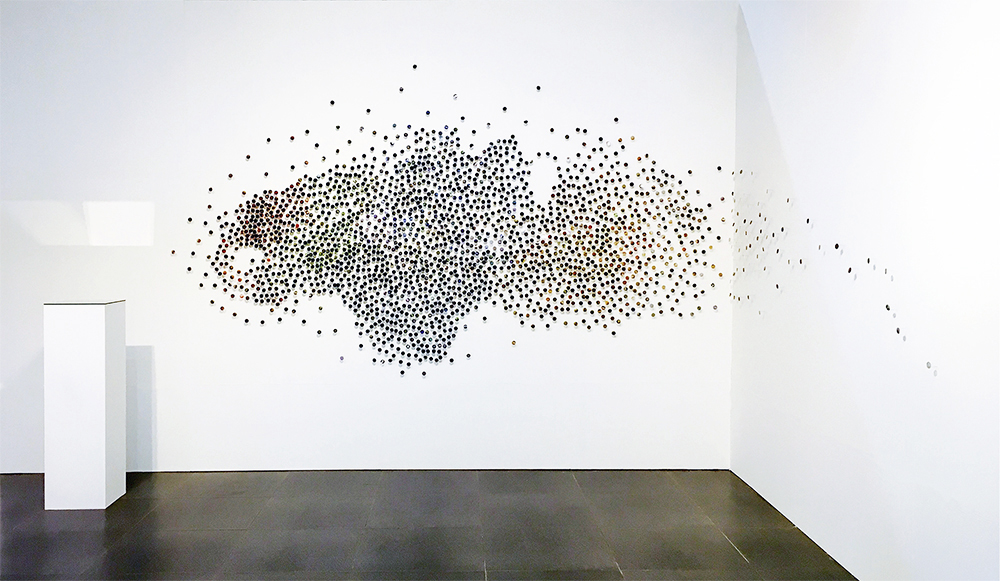 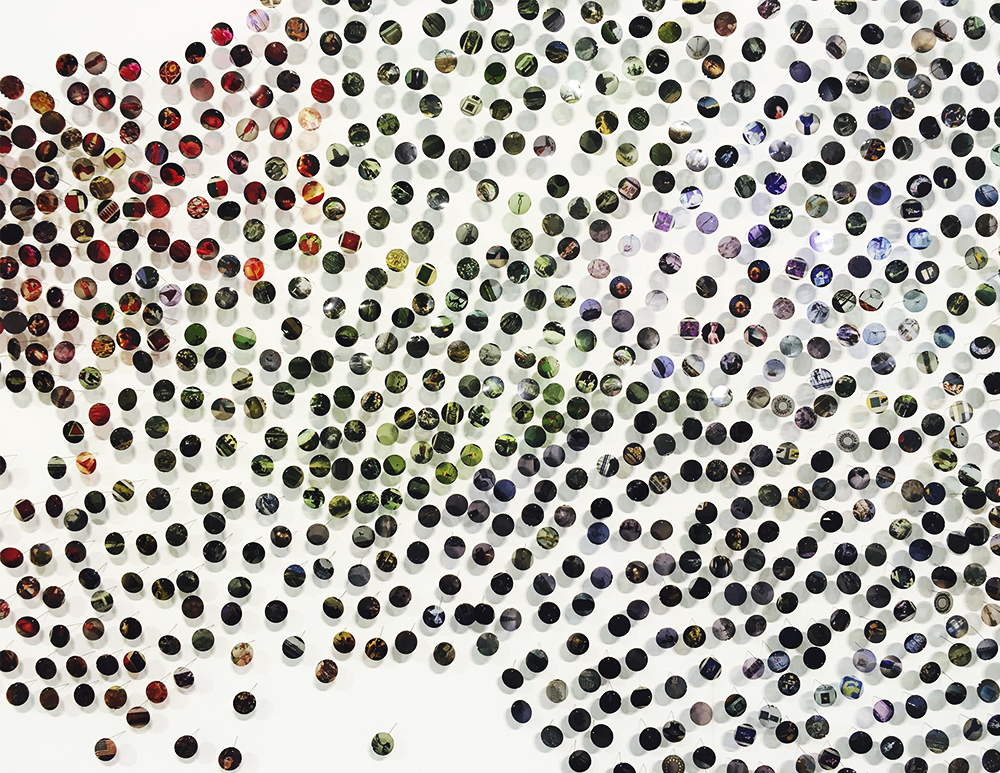 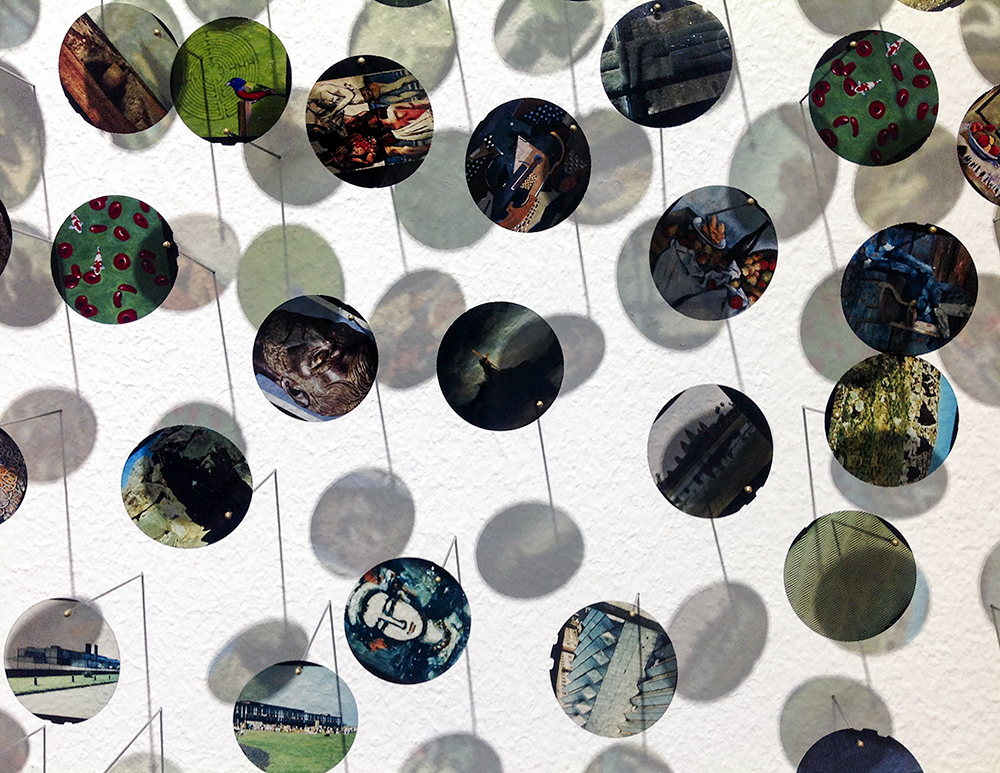 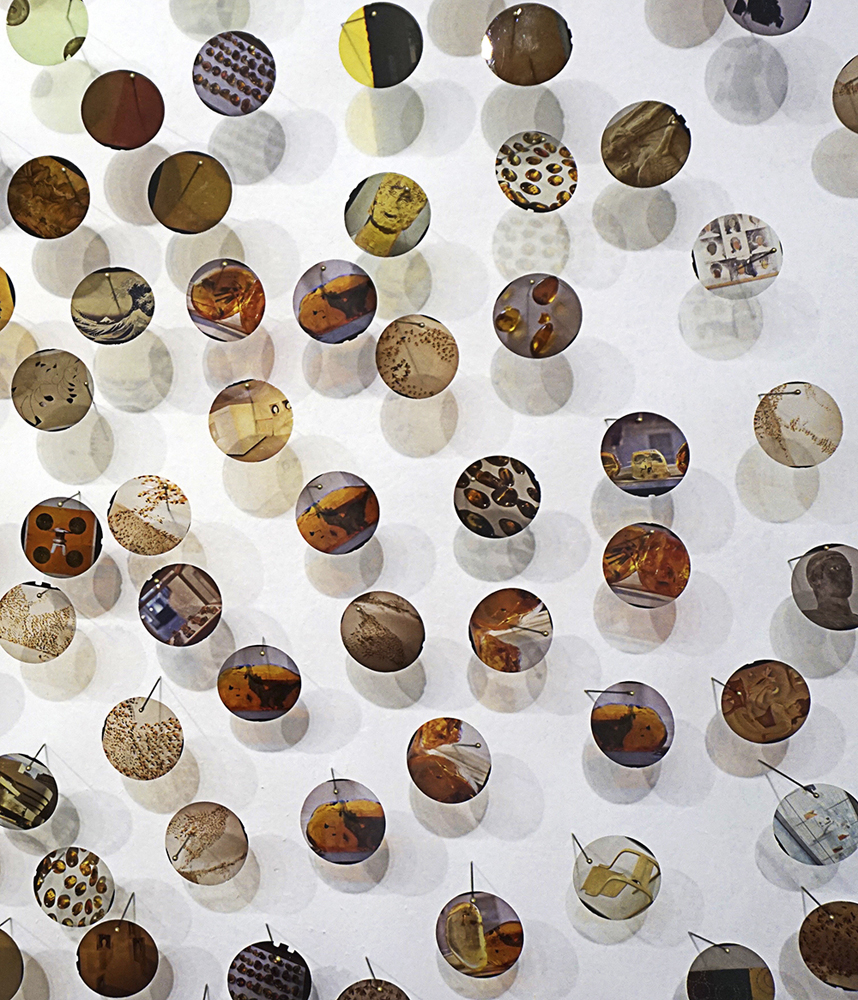 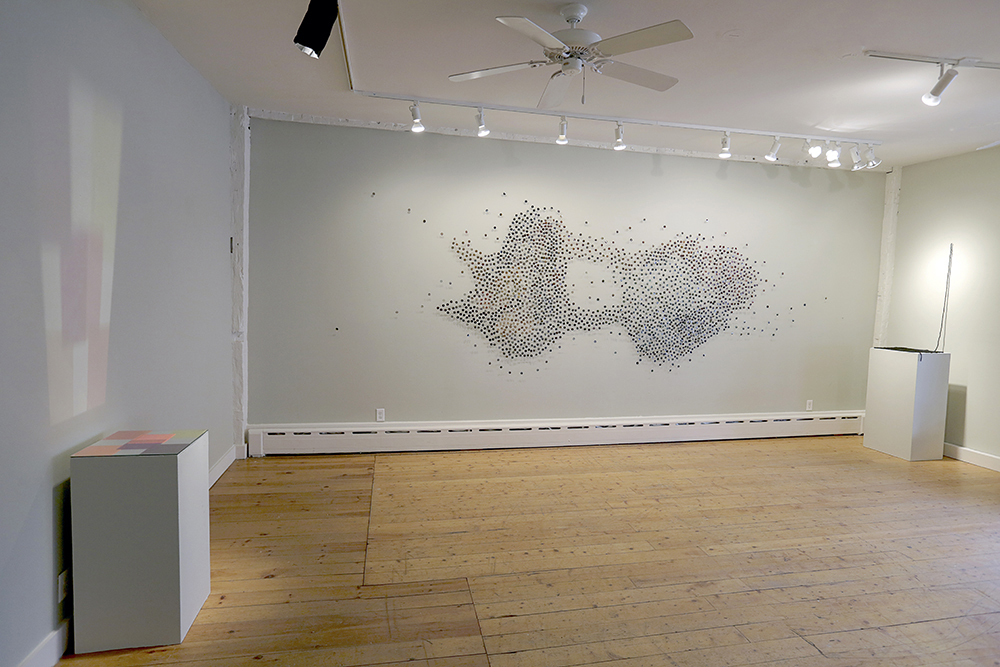 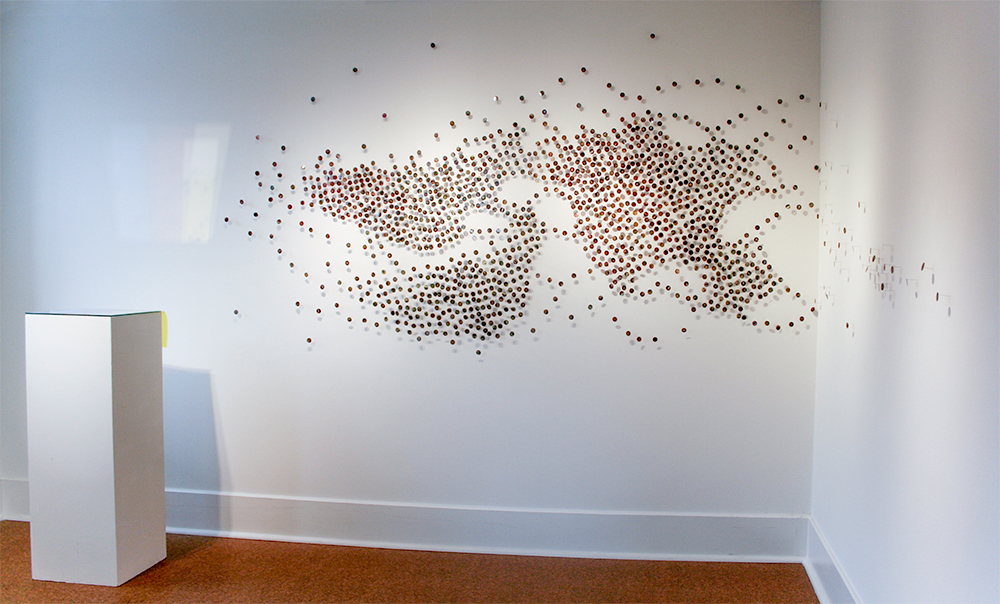 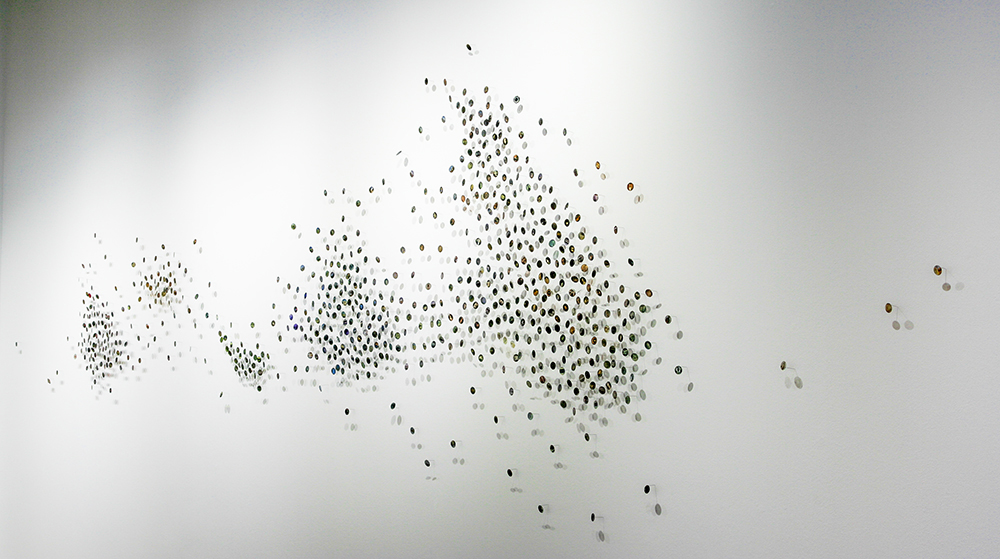 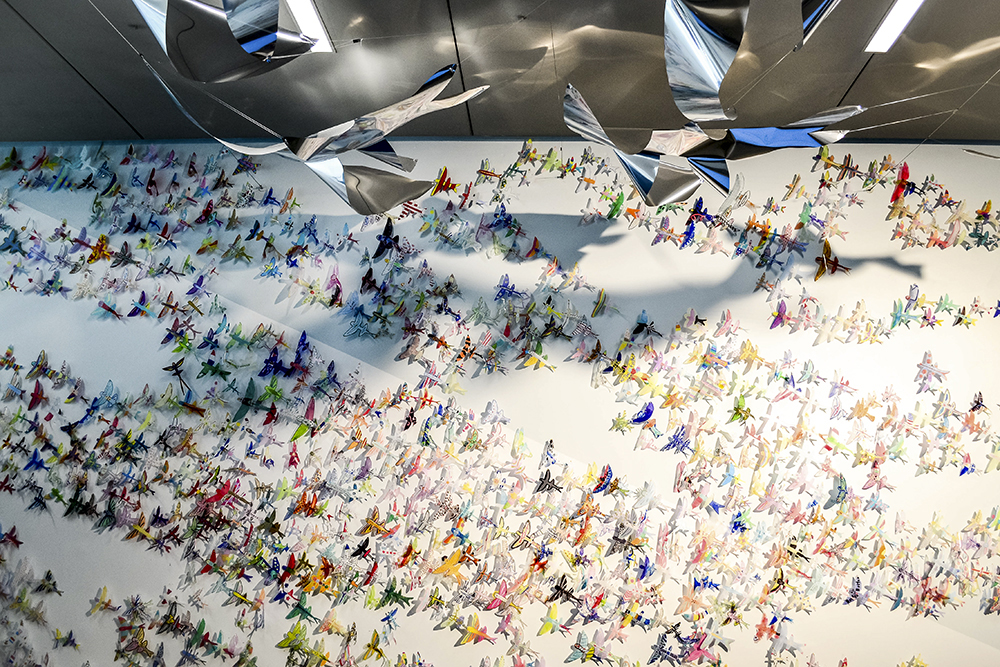