Abelardo Morell: Flowers for Lisa: A Delirium of Photographic Invention by Aline SmithsonOctober 5, 2018 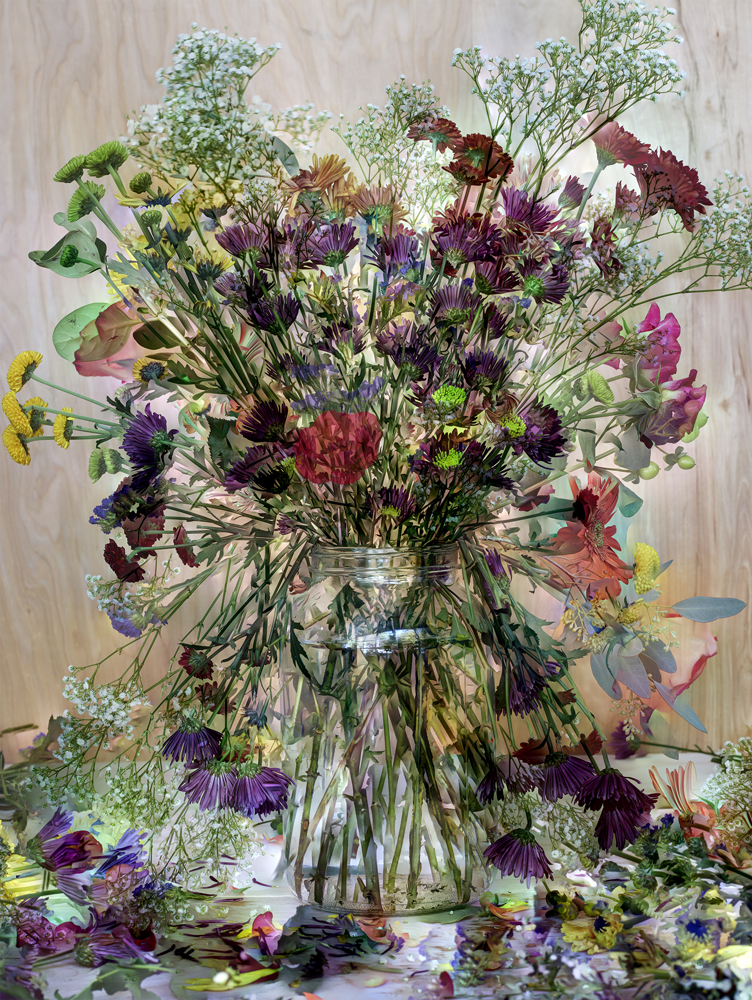 It is always exciting to see a well-established photographer take a left turn into new territory. Photographic artist Abelardo Morell has done just that with a joyful new series, Flowers for Lisa: A Delirium of Photographic Invention. The project began when Abelardo gave his wife a photograph of flowers for her birthday–an object that would be a lasting reminder of his love for her. That photograph began a journey into the splendor of floral worlds, into the deliciousness of color, fragility, and beauty allowing the artist to explore “one of the most familiar of artistic subjects, the flower, and through a series of optical and painterly interventions creates images that are at once beautiful to look at and subtly surreal.”

Flowers for Lisa: A Delirium of Photographic Invention has recently been published by Abrams; releasing on October 16, 2018. This large scale tribute to imagination and creativity features 100 images and a lively conversation between art writer Lawrence Weschler and Morell, notes by the photographer that shed light on the techniques and inspirations behind his images, and an afterword by Lisa McElaney (the Lisa in the book’s title) that explores the intimate partnership that gave rise to this groundbreaking body of work.

“Excited by the prospect of exploring this subject matter, he embraced the challenge of engaging with the longstanding tradition of depicting floral arrangements in still lifes from a fresh perspective—inspired by Jan Brueghel, Giorgio Morandi, Edouard Manet, Georgia O’Keeffe, and Irving Penn, among others.

Working primarily within his studio, Morell incorporated the techniques of painters, sculptors, print-makers and photographers to expand the notion of what a floral still life, and indeed what a photograph itself, could be. The images in this exhibition are imbued with recognizable art historical and cultural references—Van Gogh’s sunflowers, Piero della Francesca’s portrait of the Duke and Duchess d’Urbino, Surrealist trompe-l’œil imagery, and films such as Douglas Sirk’s All that Heaven Allows and Hitchcock’s Vertigo. Yet, some works are also autobiographical, reflecting Morell’s relationship with his wife and her importance in his life and artistic practice. “While the subject of my work may be flowers, the photographs are also pictures about perspective, love, jealousy, hate, geometry, sex, life, the passage of time, and death,” says Morell”. 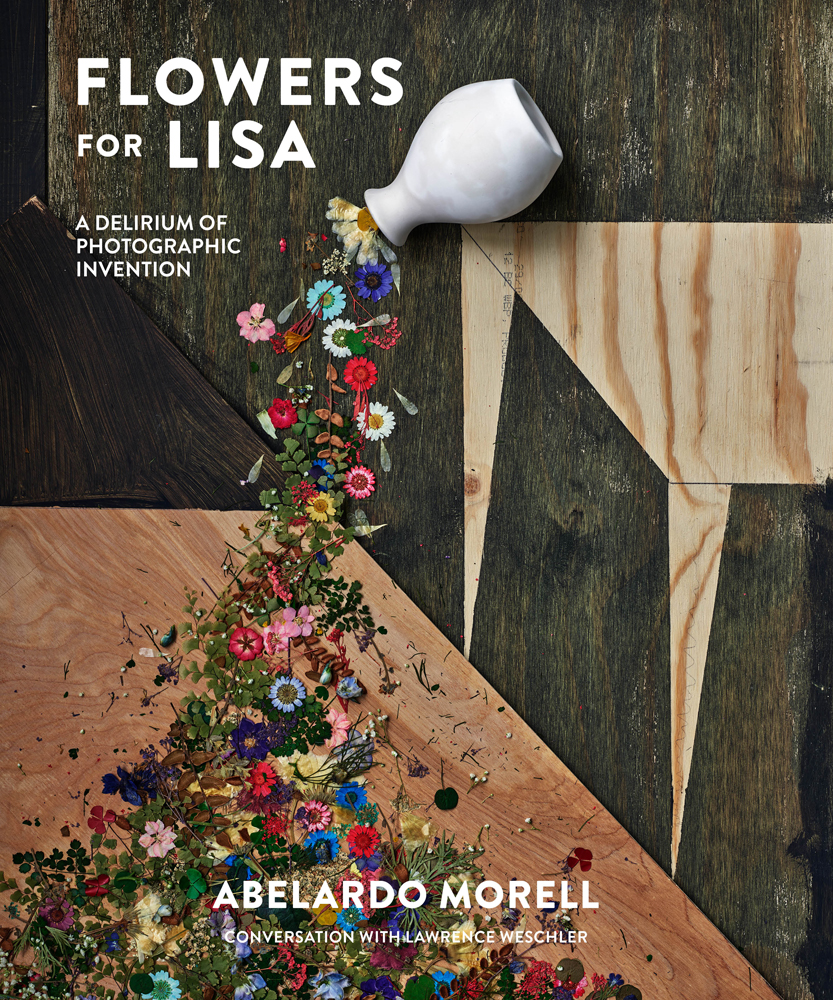 Abelardo Morell was born in Havana, Cuba, in 1948 and immigrated to the United States with his family in 1962. He holds an MFA from Yale University and a BA and honorary doctorate from Bowdoin College. He also received an honorary doctorate from Lesley University in 2014. In 1993, he was awarded a Guggenheim Fellowship. Until 2010, he was a full-time professor of photography at Massachusetts College of Art, where he continues to work with graduate students. Morell was the recipient of the International Center of Photography’s Infinity Award in 2011. In 2013, he was the subject of a retrospective entitled, “The Universe Next Door,” organized by the Art Institute of Chicago, which traveled to the Getty Museum in Los Angeles, and the High Museum in Atlanta. His work has been collected and shown in many galleries and museums, including the Museum of Modern Art, New York; the Whitney Museum of American Art; the Metropolitan Museum of Art, New York; the Art Institute of Chicago; the San Francisco Museum of Modern Art; the Museum of Fine Arts, Houston; the Museum of Fine Arts, Boston; the Victoria & Albert Museum; and more than seventy other museums in the United States and abroad. Morell is represented by Edwynn Houk Gallery in New York. His publications include A Book of Books, Camera Obscura, and The Universe Next Door, and in 2007 filmmaker Allie Humenuk produced Shadow of the House, an in-depth documentary about Morell’s work and experience as an artist.  He lives with his wife, Lisa McElaney, a mental health counselor, in Newton, Massachusetts. They have two children, Brady and Laura Morell.

About the Essayist
Lawrence Weschler is the award-winning author of Seeing Is Forgetting the Name of the Thing One Sees (about Robert Irwin), True to Life (about David Hockney), Mr. Wilson’s Cabinet of Wonder, Everything That Rises, and Domestic Scenes: The Art of Ramiro Gomez, among many others. He lives in New York City. 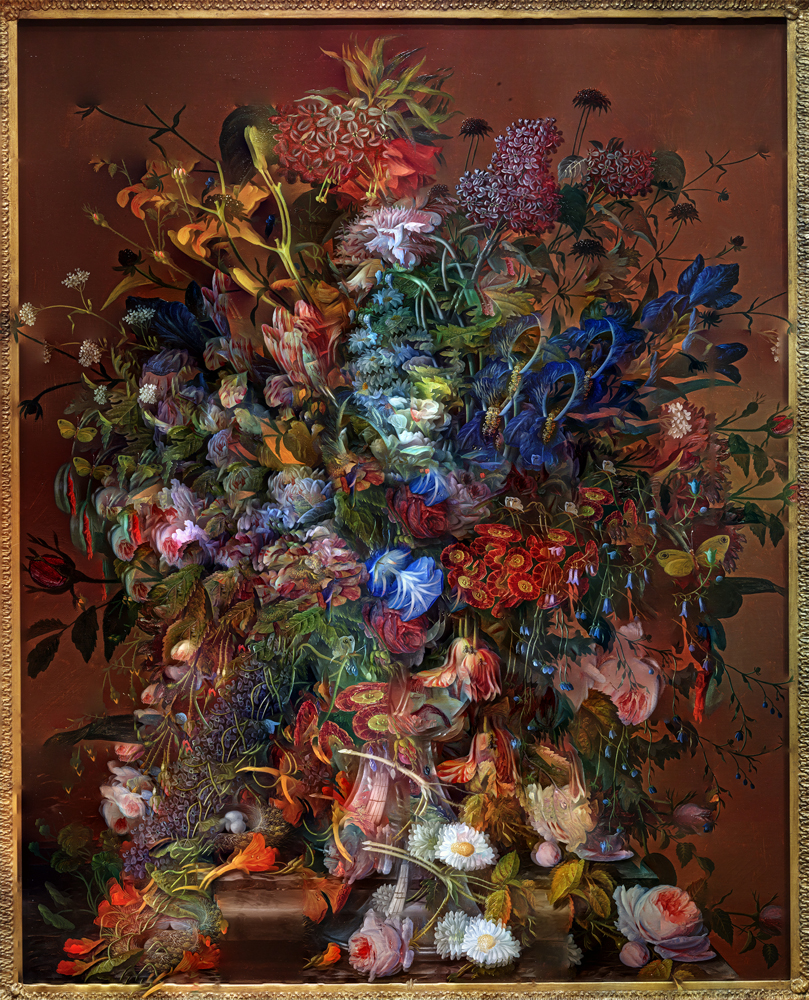 Lisa McElaney and I have been together since we were twenty and twenty-eight, respectively. My relationship with her is at the core of my life as a man and as an artist. Our love for each other—in all kinds of weather—grounds my resolve to be hopeful and vital, even when that feels like a challenge. She is always my first audience, and I count on her eyes to see things that I may not. A couple of years ago, for her birthday, I made Lisa a picture of flowers—it felt more enduring than actual flowers. In creating that image, I had no idea that a series would follow. However, something in the making of that first photograph gave me a newfound spark to experiment in ways I had not done before.

I chose the subject of flowers because they are lovely things—often exchanged between lovers—and a part of the long tradition of still life in art. Precisely because flowers are such a conventional subject, I felt a strong desire to describe them in new ways. I love how Jan Brueghel the Elder, Édouard Manet, Georgia O’Keeffe, Giorgio Morandi, Irving Penn, Joan Mitchell, and David Hockney reworked the look of common flowers to show unexpected versions of them. So while the subject of my work may be flowers, the photographs are also pictures about perspective, love, jealousy, hate, geometry, sex, life, the passage of time, and death. In choosing to limit myself to one subject, I was able to open doors to a world where I felt inventive, improvisational, and fresh.

Technically, these images involve a number of approaches, such as making multiple exposures to create oral explosions; combining my own painting with living bouquets; and using ink to produce dense cliché verre (glass plate) pictures. I believe that new possibilities in art are always around the corner, and these works have been giving me plenty of opportunities to prove that to myself again and again. At the same time, they serve an emotional impulse to show my dedication to the woman with whom I share my life. 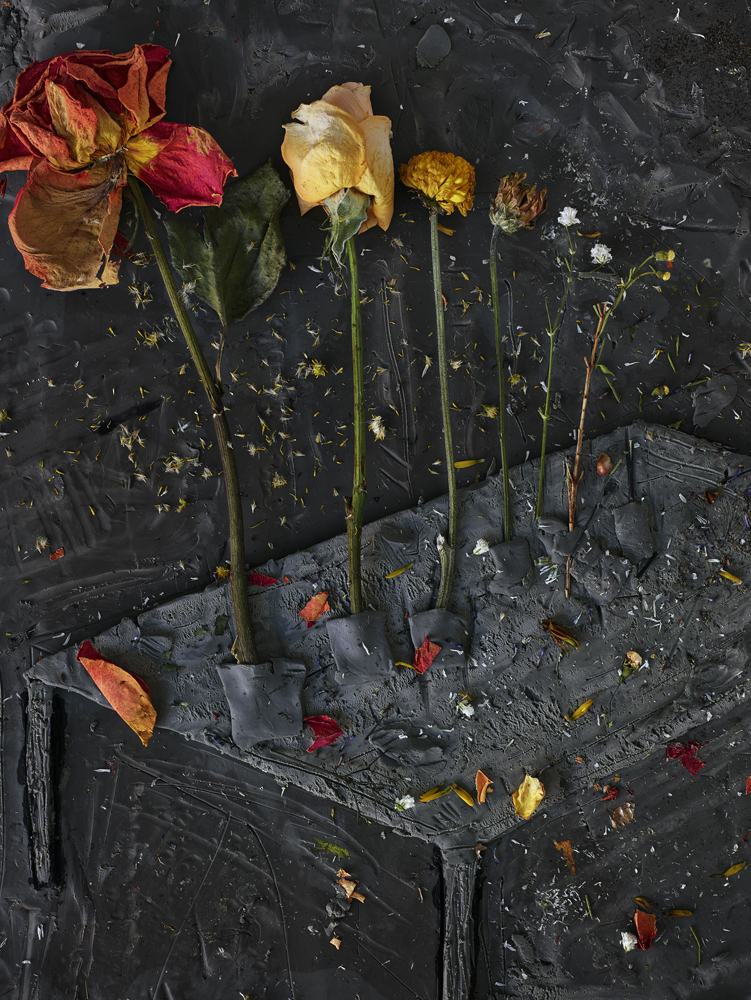 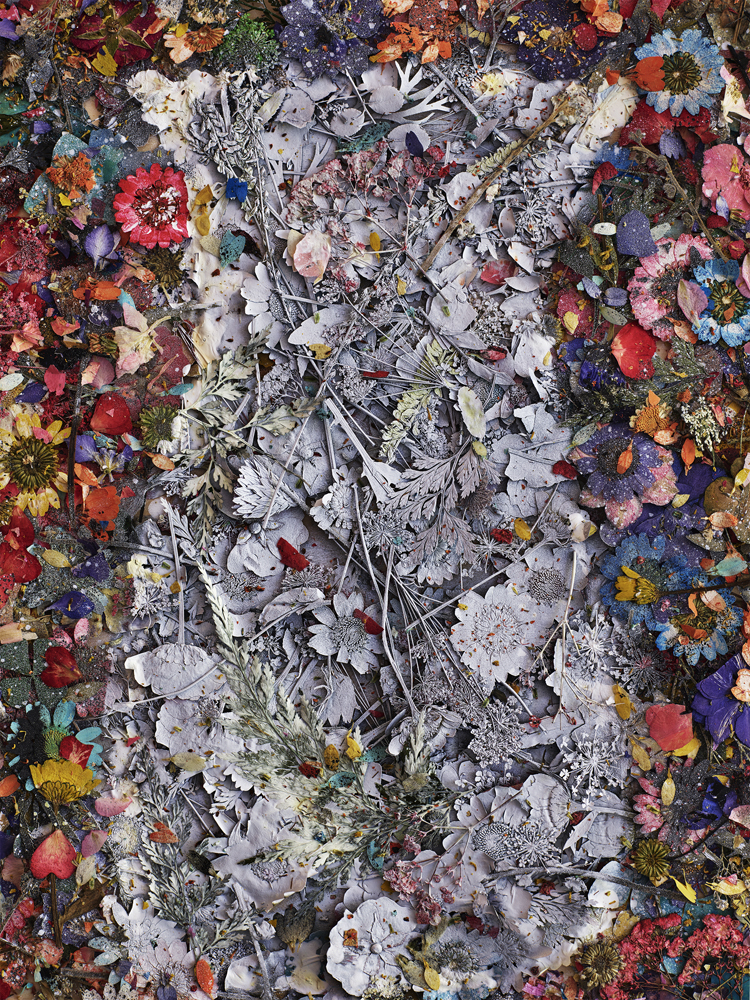 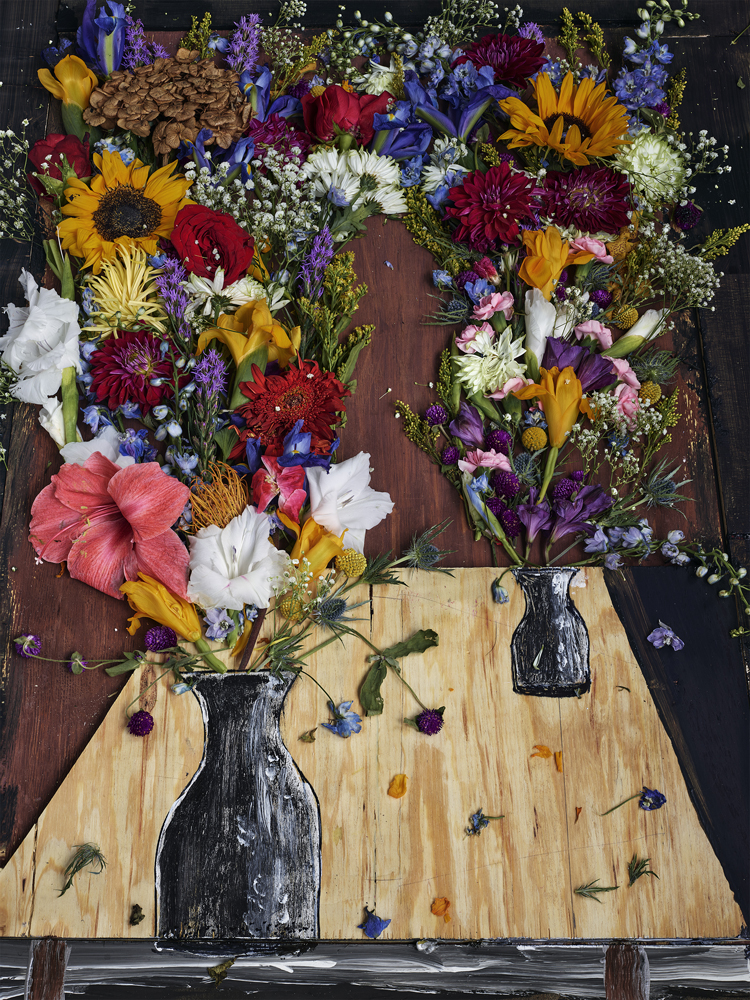 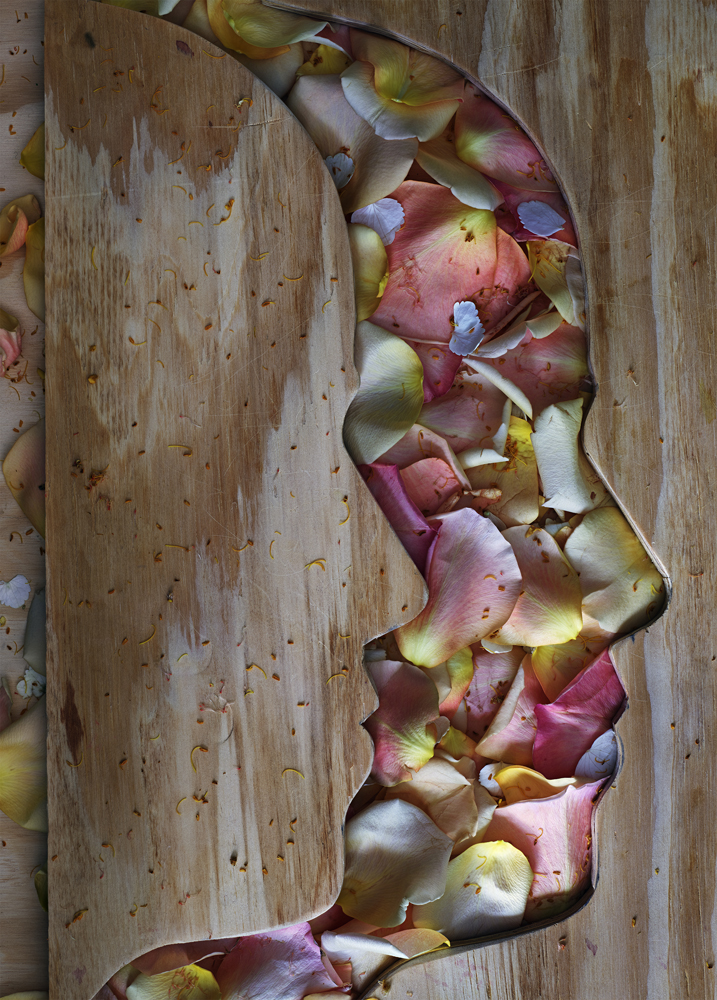 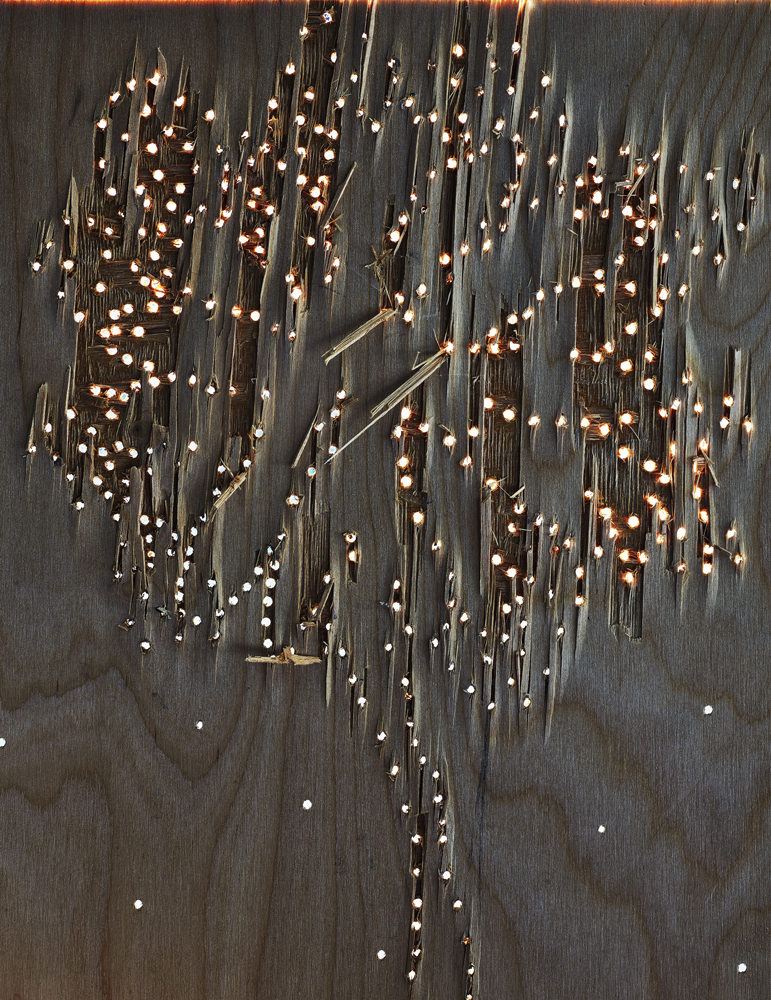