Gesche Würfel: What Remains of the Day – Memories of World War II by Aline SmithsonJanuary 25, 2019 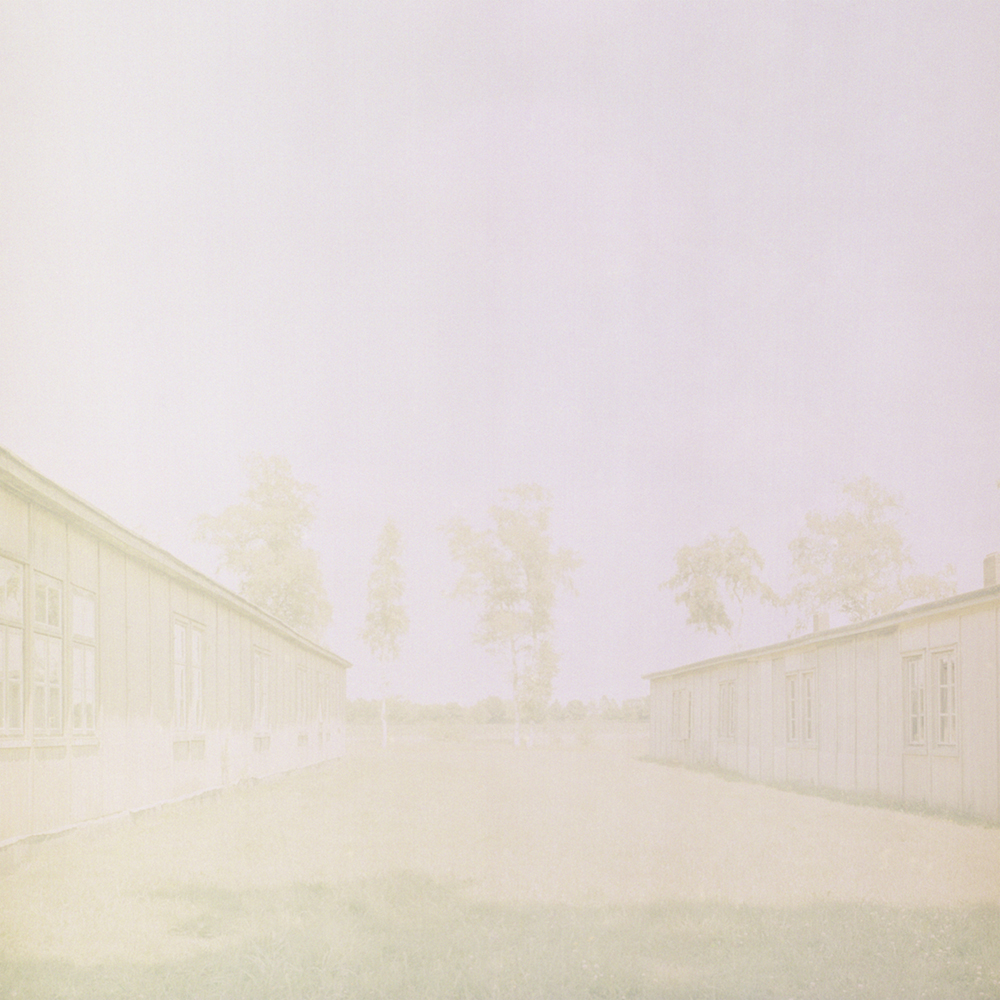 Gesche Würfel, Prisoners’ Barracks (Stalag X B Sandbostel Camp Memorial, Germany), 2015, Archival Pigment Print, 30 x 30” Stalag X B was a prisoner of war camp between 1939 and 1945. Most prisoners had to conduct forced labor at farms or arms factories. Polish, Italian, French, Yugoslavian, Belgian and Russian prisoners were held captive at the camp – at times as many as 50,000 prisoners. At least 10,000 people perished at the camp (https://www.stiftung-lager-sandbostel.de/more-languages/english/).

Continuing our recognition of the International Holocaust Remembrance Day on January 27 we are featuring Gesche Würfel’s What Remains of the Day – Memories of World War II. The project explores the aftermath of World War II and the Holocaust on contemporary life by grappling with time and memory through images of places and people.  Born in Germany, Gesche has created a comprehensive look the past and present to “encourage the viewers to think about how the horrors of Fascism and World War II are still relevant today.” Her unique approach to the processing of her photographs, where she overexposes the images for one second for every year since the war ended in Europe on May 9, 1945, makes us consider history, memory, and what is left behind.

An exhibition of the work is now on display at the Pensacola Museum of Art (University of West Florida) running through March 17, 2019.

Würfel is the author of Basement Sanctuaries (Schilt Publishing 2014). She is a recipient of grants from the Puffin Foundation, the University of North Carolina at Chapel Hill, the Lower Manhattan Cultural Council (LMCC) and others. Würfel was named as the Juror’s Pick for the LensCulture Emerging Talent Awards 2016, is a finalist in the 2017 and 2018 Lange-Taylor Award, and a Top 50 Critical Mass 2017 winner. Collecting institutions are the MIT Museum, MA (USA) and the Portland Museum of Art, OR (USA). 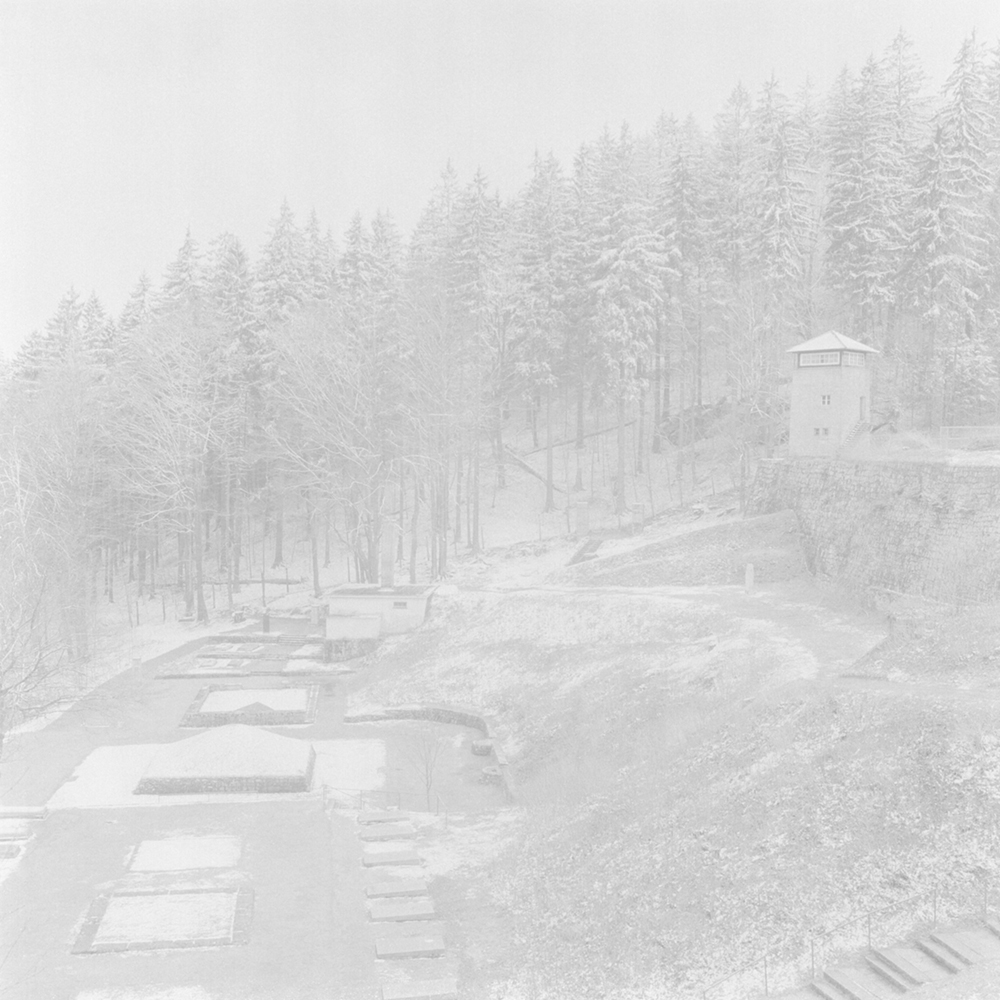 ©Gesche Würfel, Valley of Death (Flossenbürg Memorial and Museum, Germany), 2016, Archival Pigment Prin, 30 x 30” The Flossenbürg concentration camp in north-east Bavaria existed between 1938 and 1945. The location was chosen because of several nearby granite quarries where many prisoners had to perform forced labor. By 1945, the concentration camp had over 100 satellite camps and working commandos. Approximately 84,000 men and 16,000 women from over thirty countries were imprisoned in the Flossenbürg camp and its sub-camps between 1938 and 1945. Around 30,000 people perished under the catastrophic living conditions, from forced labor or in killing operations (http://www.gedenkstaette-flossenbuerg.de/en/home/).

What Remains of the Day – Memories of World War II

“What Remains of the Day – Memories of World War II” explores the aftermath of World War II and the Holocaust on contemporary life by grappling with time and memory through images of places and people. I photograph places that evoke the horrors of the Nazi regime by overexposing the photos so that only traces of the resulting images are recorded. I overexpose the images for one second for every year since the war ended in Europe on May 9, 1945. For example, photos taken in 2016 (71 years after the end of World War II) were overexposed for 71 seconds. Much like memory, the photographs are fragmented and ambiguous, and some are in color, others in black and white.

The places I photograph include concentration, labor and death camps, the Reich Aviation Ministry, the House of the Wannsee Conference, and the D-Day Beaches in Normandy, France, or the Atlantic Wall fortifications in Brittany, France. 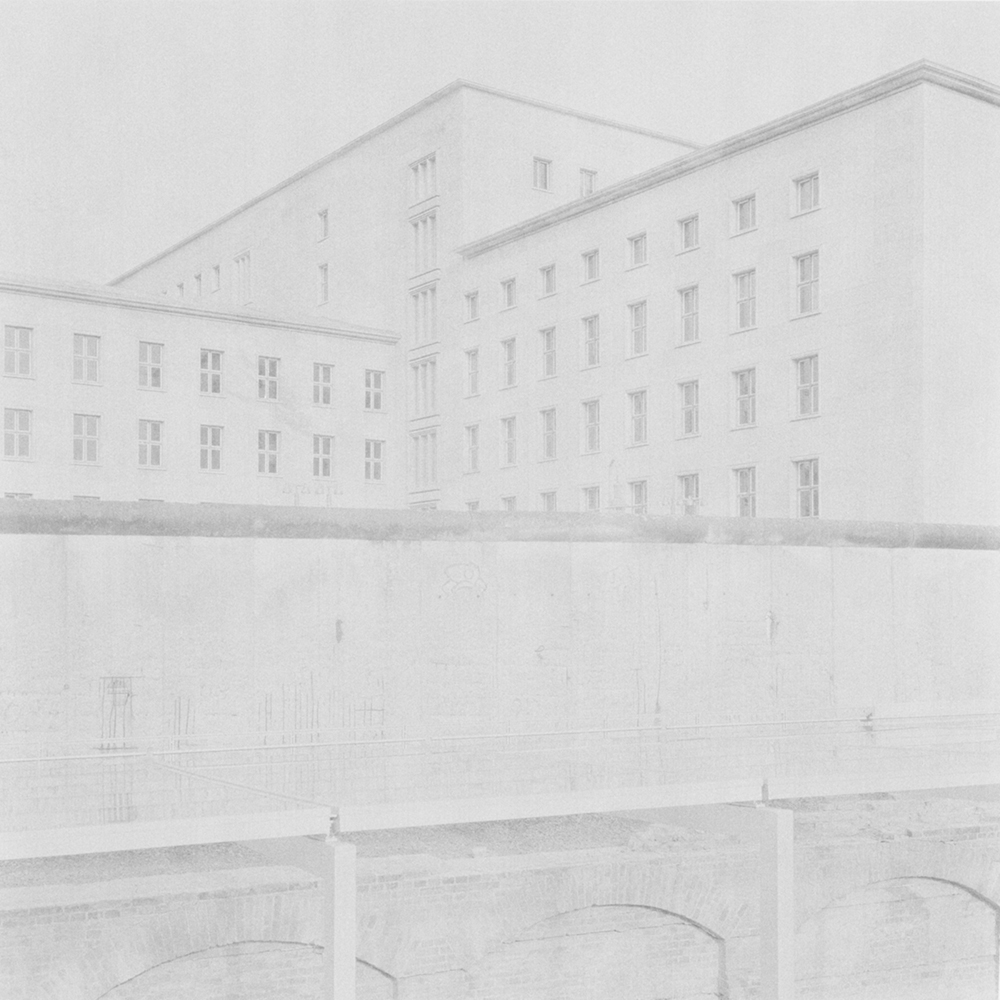 I explore people through portraits and interviews. I select people who experienced the war in diverse ways: including Holocaust survivors, Germans, and Allied veterans. These interviews present personal perspectives on the war and the Hitler regime. I have interviewed and taken portraits of 21 people. The portraits were taken in Germany, the UK, and the U.S.

I was born and raised in Germany, so I have a personal relationship to the aftermath of WWII and my family’s involvement in the war. I now live in the U.S., which enables me to view my home country through a different lens. My background as urban planner, visual sociologist, and photographer qualifies me to both interview and photograph people and places. With this project, I offer an approach to place, history, and personal trauma that is historical but still resonates in contemporary U.S. and European politics where anti-Semitic, anti-immigrant, and anti-Muslim sentiments have risen. The photos encourage the viewers to think about how the horrors of Fascism and World War II are still relevant today. What will happen to Europe as anti-immigrant right-wing parties become stronger? Is U.S. democracy weakening and heading towards authoritarianism? “What Remains of the Day – Memories of World War II” inspires critical thinking and engages its viewers by forming a bridge between the past and the present. – Gesche Würfel 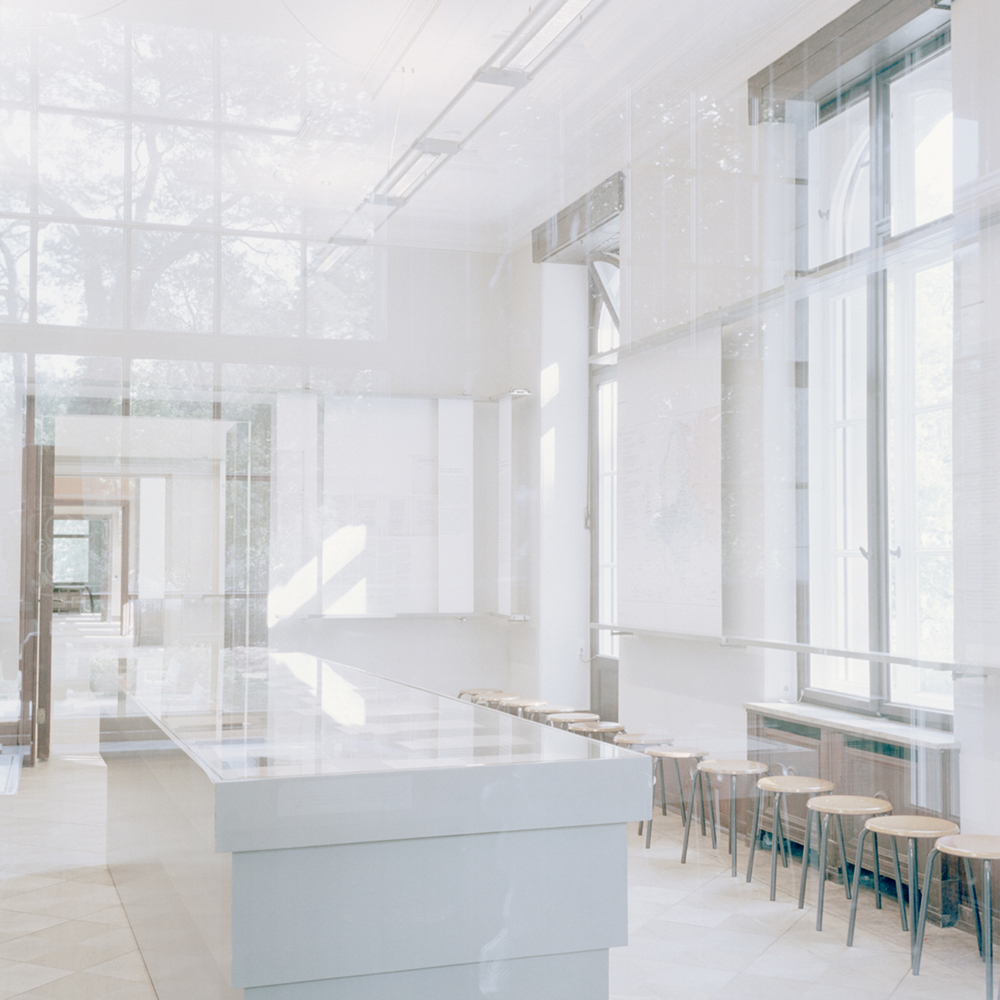 ©Gesche Würfel, House of the Wannsee Conference where the Final Solution to the Jewish Question was decided (Berlin, Germany), 2016, Archival Pigment Print, 30 x 30” On January 20, 1942, representatives of the SS, the NSDAP and various Reich ministries attended a meeting to discuss the “Final Solution of the Jewish Question”, which was convened by Reinhard Heydrich, Head of the Security Police and SD. According to the protocol of the Wannsee Conference, the annihilation of up to 11 million Jews all over Europe was planned. Approximately 6 million European Jews were murdered during the Holocaust (http://www.ghwk.de/en/). 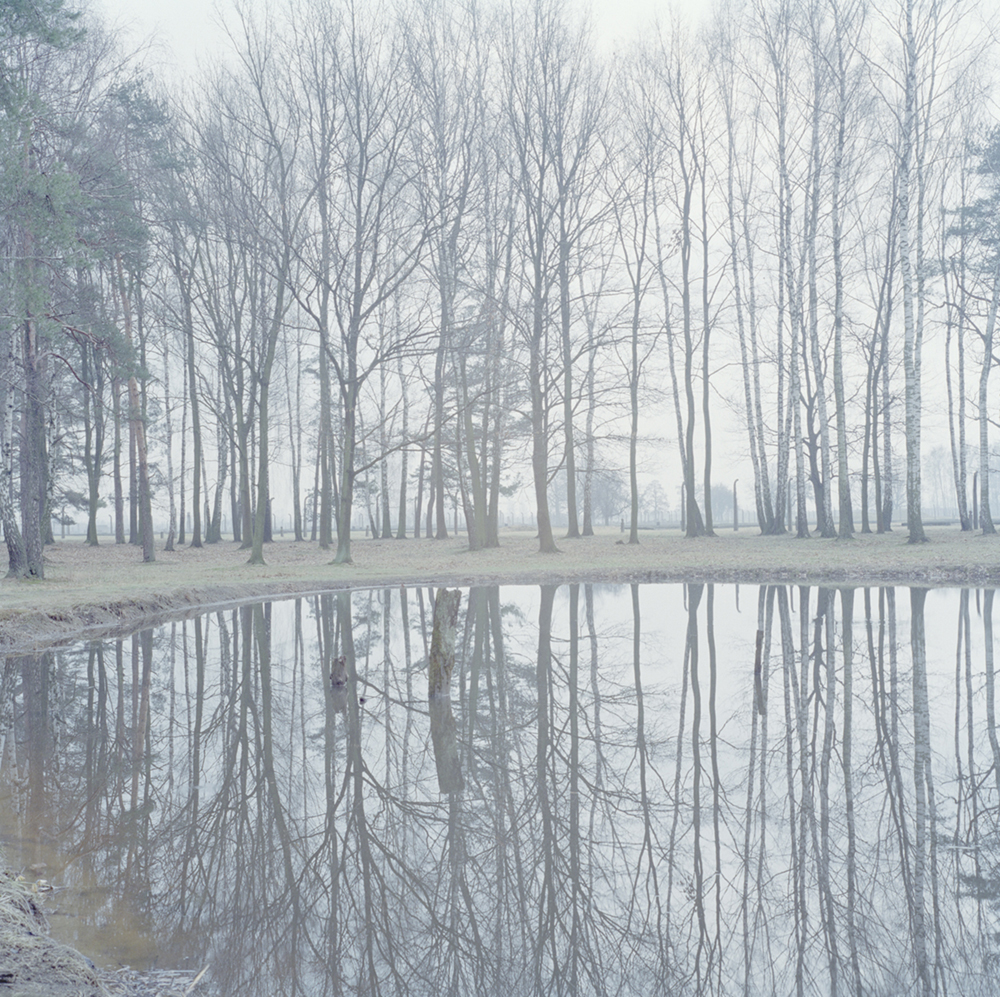 ©Gesche Würfel, Pond in which the ashes were disposed of after cremation (Auschwitz-Birkenau Memorial and Museum, Poland), 2016, Archival Pigment Print, 30”x30” Auschwitz is the largest National Socialist concentration and extermination camp. It has come to be synonymous with the Holocaust. Here, members of the SS murdered about a million Jews, tens of thousands of Polish political prisoners, Soviet prisoners of war as well as Sinti and Roma. Approximately one in six Jews killed in the Holocaust died at this camp (http://auschwitz.org/en/). 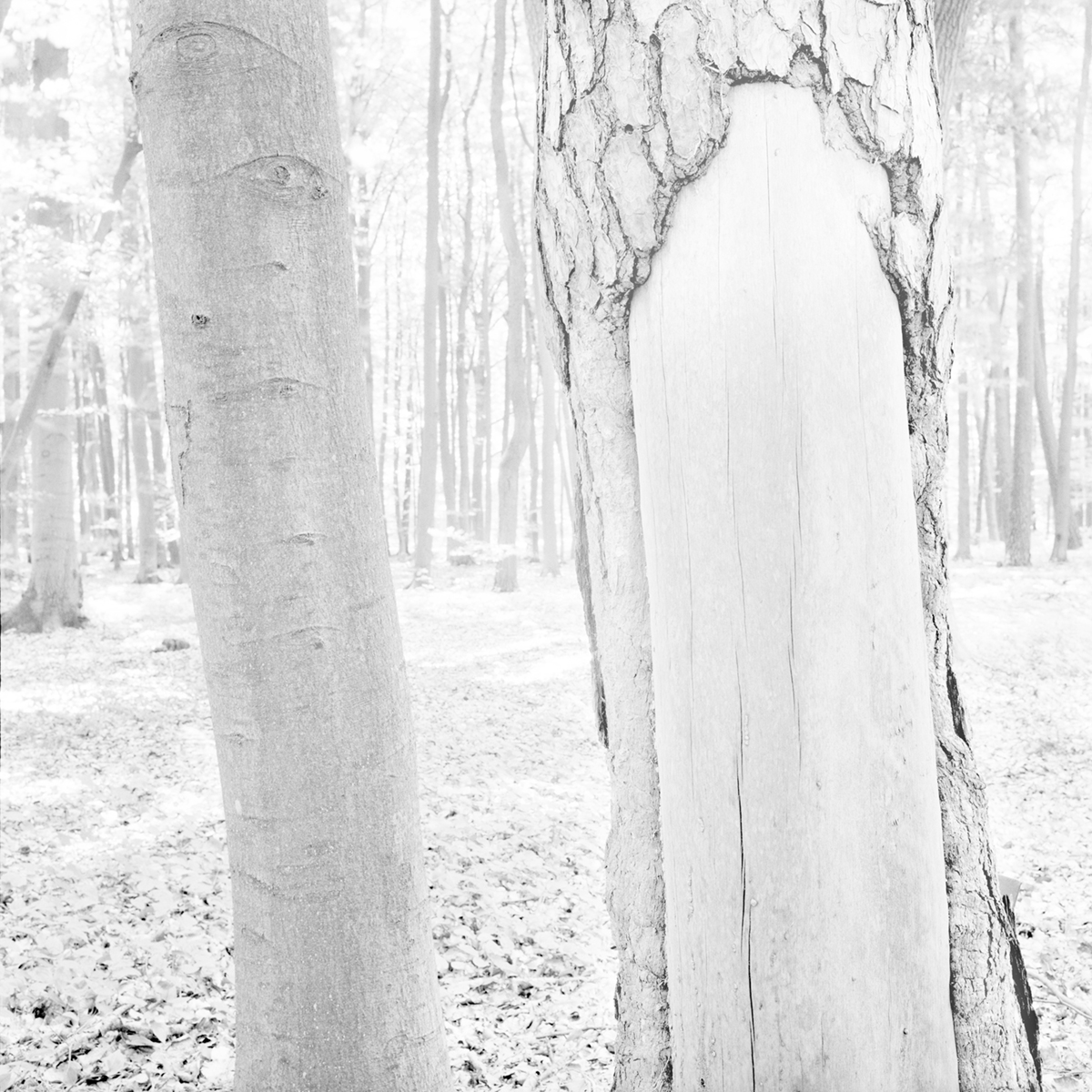 ©Gesche Würfel, Below Forest (Germany), 2014, Archival Pigment Print_, 30 x 30” The forest of the village Below is located approximately 180 km north-west of Berlin, Germany. Shortly before the Red Army approached the concentration camp Sachsenhausen and its sub-camps in April 1945, 33,000 prisoners were sent on death marches. They had to march 20-40 km a day without any food or water. Prisoners who were not able to walk or who tried to search for food or water were shot dead. Between April 23-29, 1945, more than 16,000 prisoners camped in Below Forest before they were freed by the Allies. As the prisoners were starving, they ate tree bark, which is still visible today (http://www.stiftung-bg.de/below/). 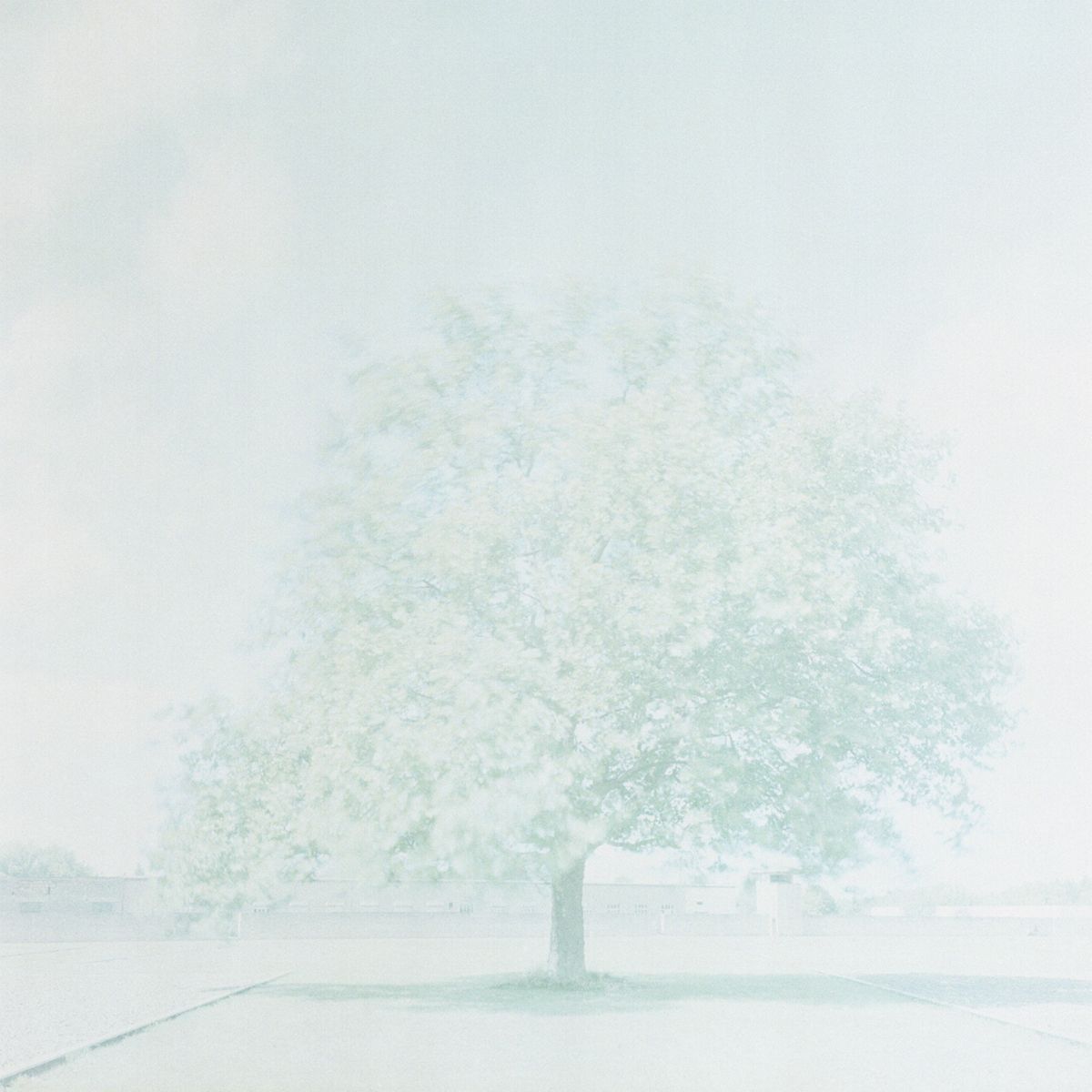 ©Gesche Würfel, Tree on Foundation of Prionsers’ Barracks (Sachsenhausen Memorial and Museum, Germany)_2014_Archival Pigment Print_30 x 30” The Sachsenhausen concentration camp is located in Oranienburg, 35 km north of Berlin, and was established in 1936. It was intended to set standard for other concentration camps, both in treatment of prisoners and in design. Since the administrative center of all concentration camps was located in Oranienburg, Sachsenhausen became a training center for the Schutzstaffel (SS) officers who would often be sent to other camps afterwards. From 1936 to May 1945, the camp was at first used for political prisoners but by 1939 large numbers of citizens from the other European states arrived. More than 200,000 people were imprisoned here of which tens of thousands died of forced labor, starvation, disease, and mistreatment. Others died as a result of medical experiments or were victims of the systematic extermination operations of the SS (http://www.stiftung-bg.de/gums/en/). 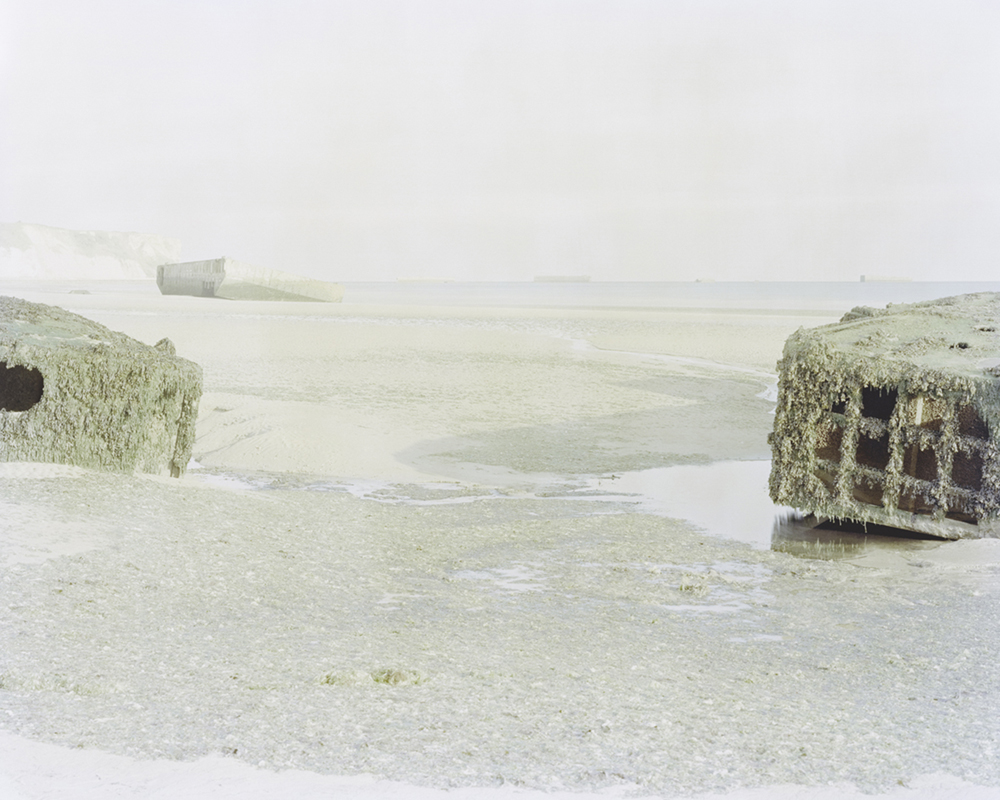 ©Gesche Würfel, Artificial Harbor for the Invasion of Normandy (Arromanches-les-Bains, France)_2017_Archival Pigment Print_30 x 37.5” On June 6, 1944, American, British, Canadian, and Free French forces landed on the coast of Normandy, France in a large-scale operation codenamed “Operation Overlord” and managed to secure the beachheads. The “Operation Overlord” lasted from June 6th to 30th when German forces retreated across the Seine with the total number of casualties of 425,000 Allied and German troops. During the liberation of Normandy, about 20,000 civilians were killed, that is a third of all French civilians killed during the Second World War. (http://normandy.memorial-caen.com/museum/d-day-landings-and-battle-normandy). 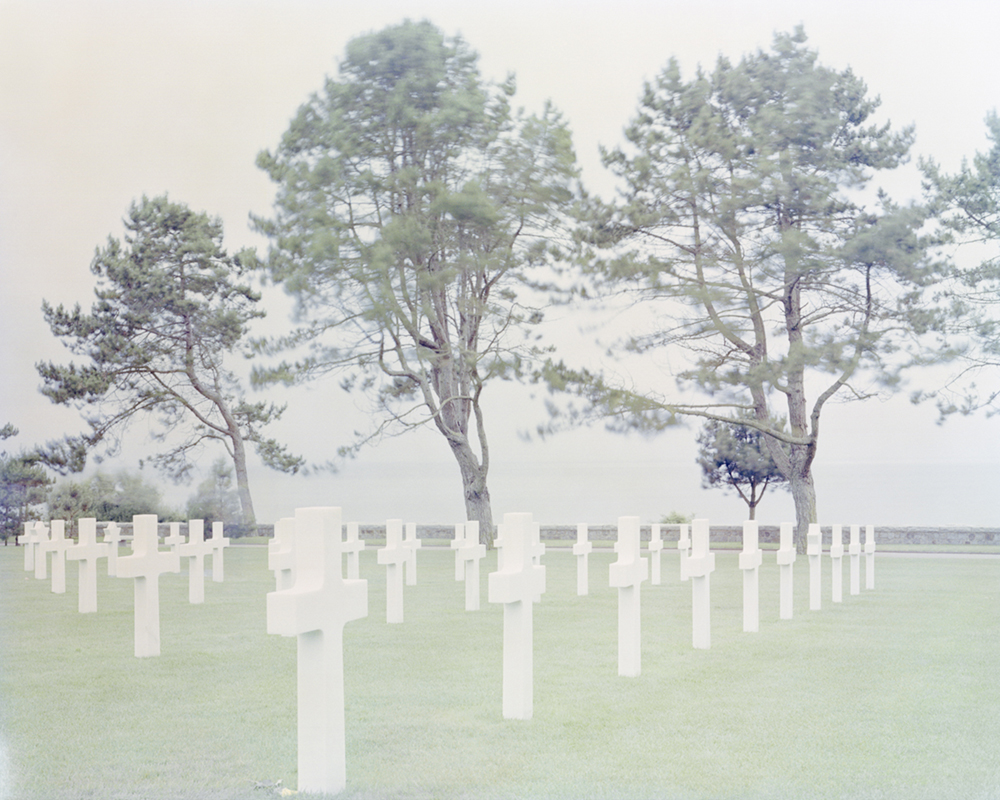 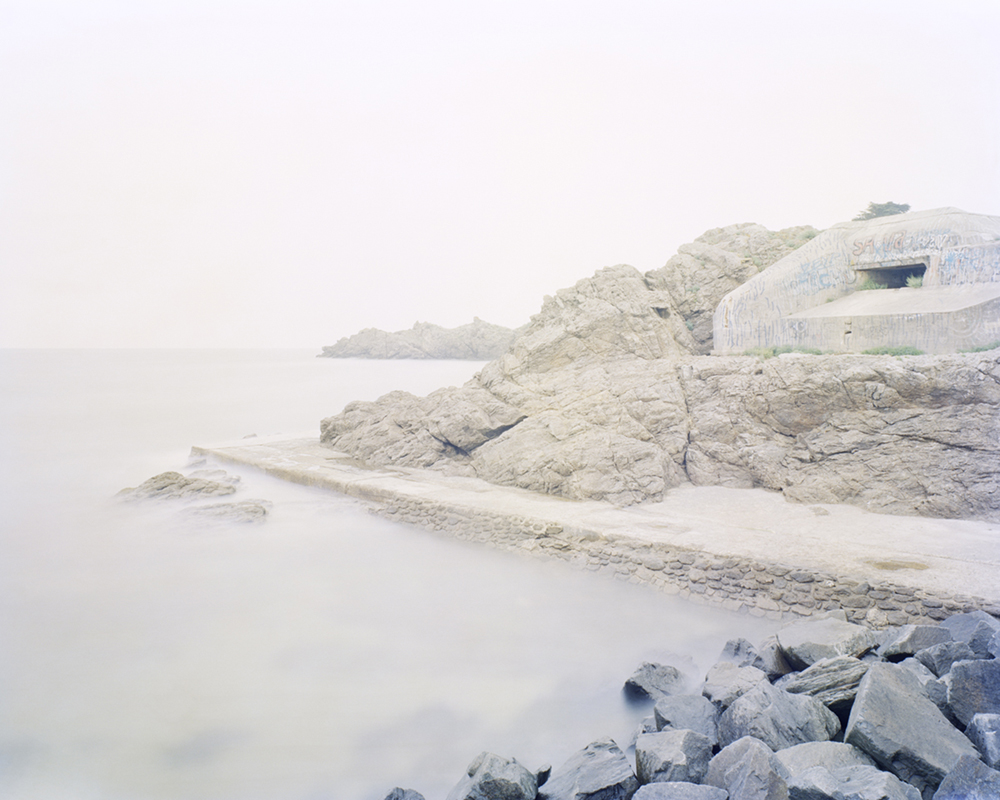 ©Gesche Würfel, Bunker of the Atlantic Wall Fortifications (Saint-Lunaire, France)_2018_Archival Pigment Print_30 x 37.5” The Atlantic Wall was an extensive system of concrete barriers and gun emplacements stretching along the coast from the Spanish-French border to Scandinavia. It was Hitler’s cornerstone of his Fortress Europe defenses against Allied invasion. Construction of the complex network was overseen by the Führer’s chief architect, Albert Speer. The French part of the Atlantic Wall was built by forced laborers and non-German volunteer labor. When the Allies invaded Normandy in 1944, most of the defenses were stormed within hours. Ruins of the Atlantic Wall still exist in France and other countries (https://www.bbc.co.uk/news/world-europe-10632543). 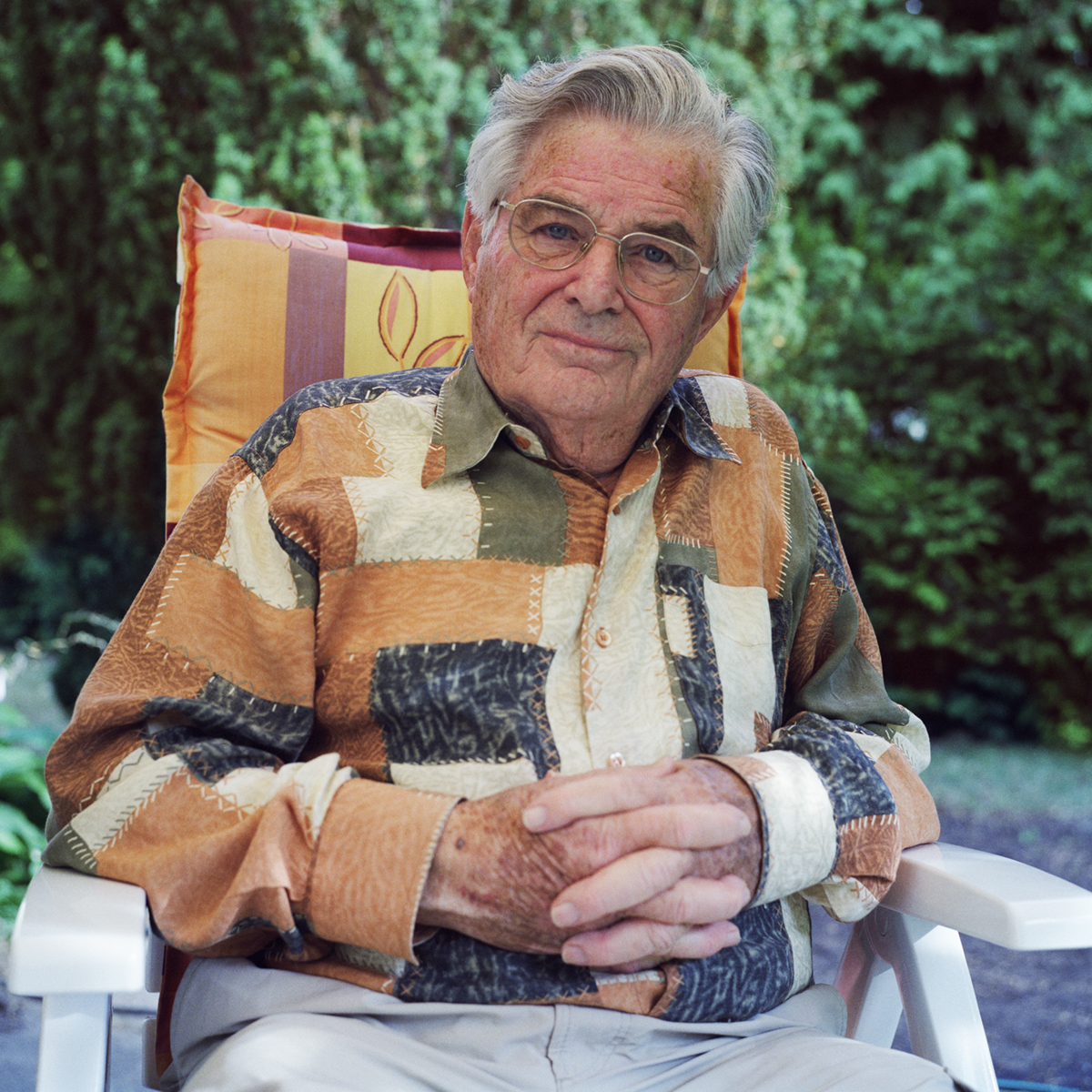 ©Gesche Würfel, Walter Sylten, 2018, 15 x 15” Walter lost both parents when he was young. His mother committed suicide in early 1935 because her husband was half Jewish (according to the Nuremberg Laws) and society was becoming increasingly anti-semitic. Walter’s father was also a Protestant minister. In 1941, Walter’s father was deported to the Dachau concentration camp and killed in Schloss Hartheim in 1942. Walter and his brother stayed with their foster mother in Berlin where they went to school. Walter managed to escape from his Hitler Youth duty. Shortly after the war, he was recognized as a Victim of Fascism. 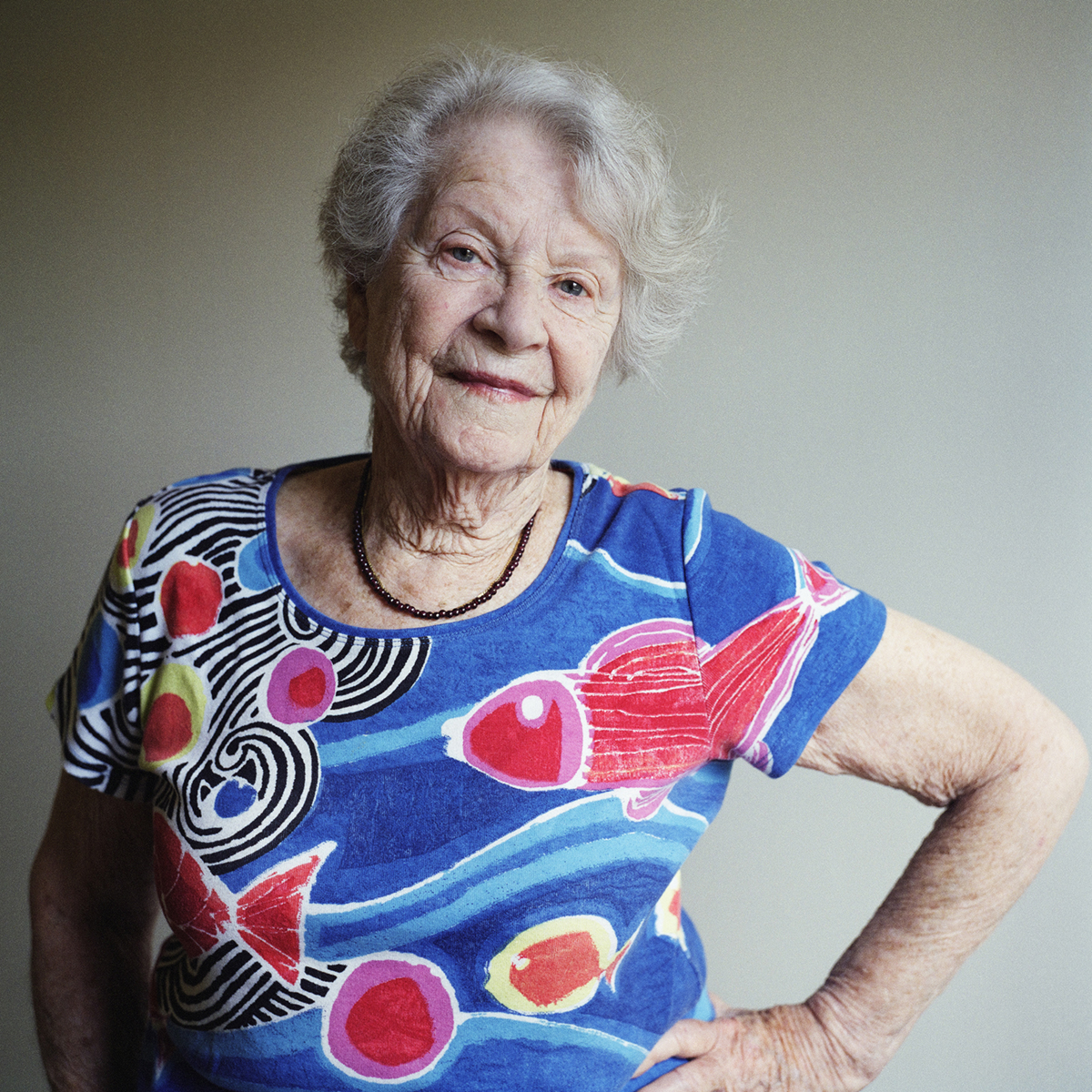 ©Gesche Würfel, Barbara Ledermann, 2018, 15 x 15” In 1933, Barbara’s family moved from Berlin to Amsterdam, the Netherlands, where they became friends with Anne Frank and her family. When the Germans invaded the Netherlands in 1940, Barbara got falsified identification papers that helped her pass as an Aryan despite being Jewish. She got the papers with help from her boyfriend, who was connected to the Dutch Underground. In 1943, her parents and sister were transported to the Westerbork transit camp and then deported to Auschwitz where they were killed upon arrival. Barbara worked for the resistance and survived using her false papers. She helped other Jews find hiding places and procured food for them. She immigrated to the U.S. in 1947. 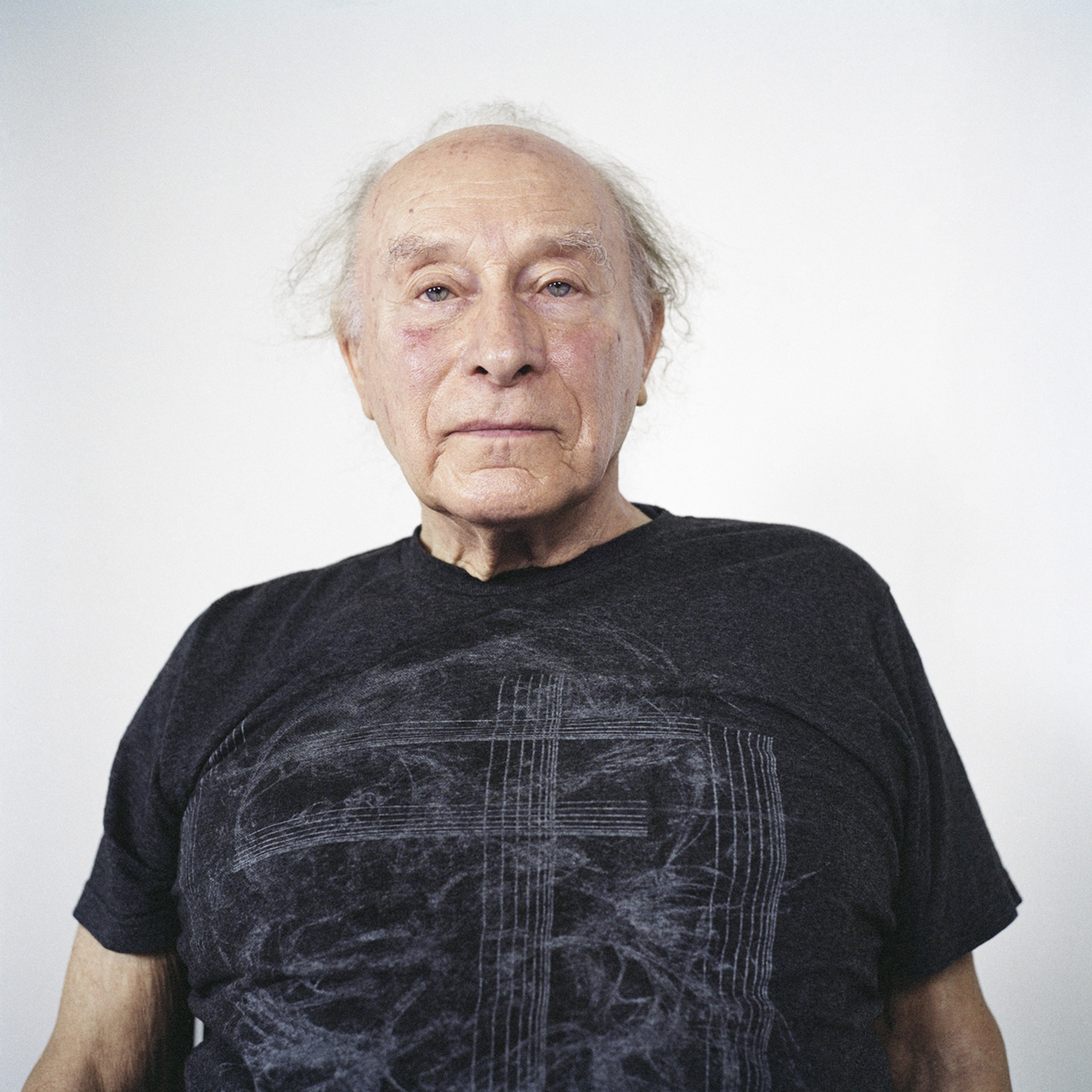 ©Gesche Würfel, Tibor Spitz, 2017, Archival Pigment Print, 15 x 15” Tibor, his close family of five, and his grandfather survived the war by hiding in the forest in an underground shelter in Slovakia during the last seven months of the war. They were close to death when a group of parachuted Ukrainian partisans robbed them of food and clothing and left them to starve, freeze or to be shot by the German patrols. When the war was finally over, the villagers came to the forest to announce the end of the war. They returned to their village and were almost shot by a Red Army soldier who was destroying the last remnants of their property. They barely survived WWII sick and exhausted, all their relatives were dead, and their property gone. But they were alive and eager to start all over again. 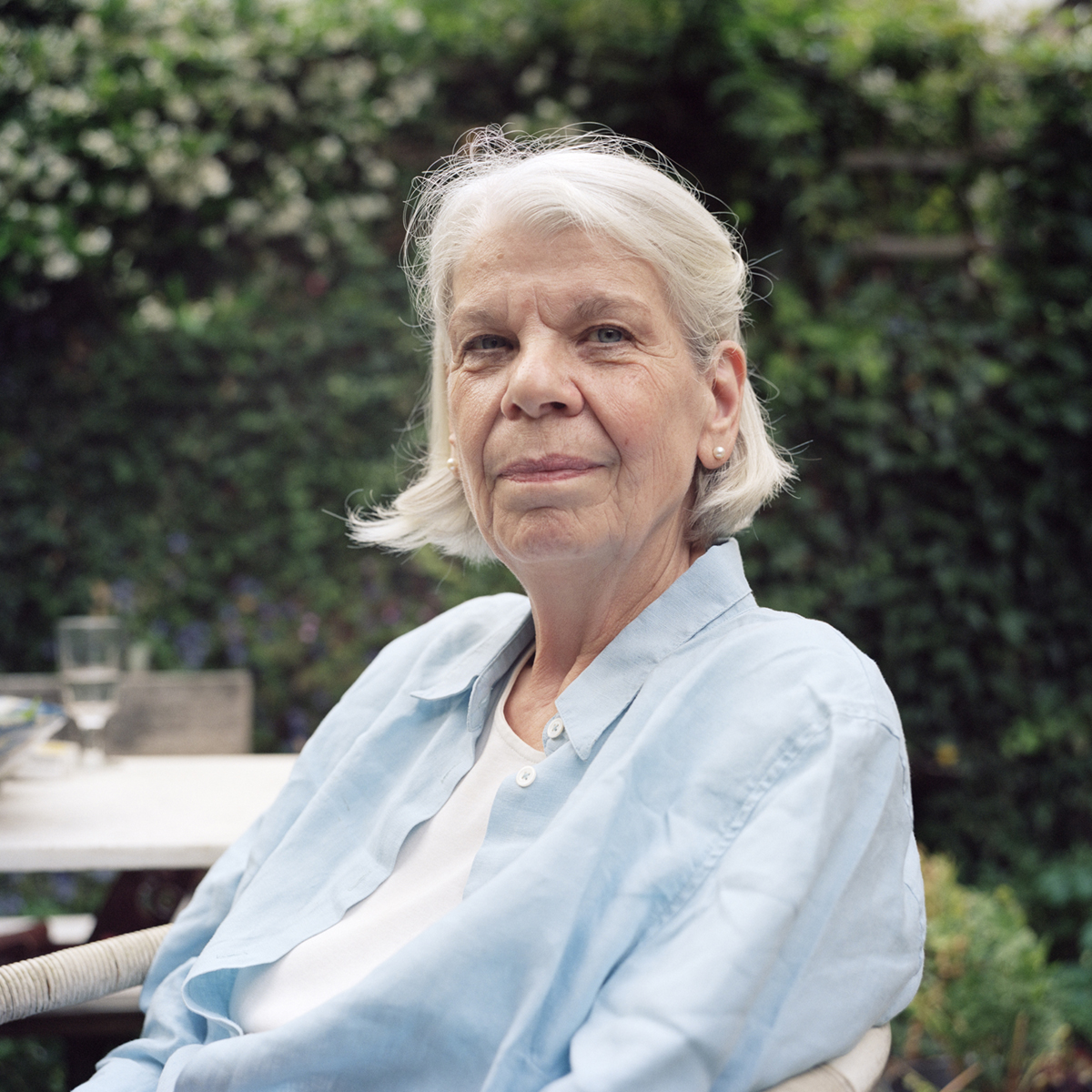 ©Gesche Würfel, Godela von Xylander, 2018, Archival Pigment Prin, 15 x 15” Godela grew up in Berlin, Germany. When Berlin was bombed in 1943 her family moved to Bavaria. She and her older brothers spent most of their days roaming through the mountains and only went home when they were hungry. At the end of the war, the Americans were hunting for Hitler’s private secretary (Martin Bormann) in the nearby mountains. Godela and her brothers watched the American soldiers drop burning fuel canisters to flush out Bormann from his hiding place. But, it turned out that Bormann was not hiding in the mountains. He had committed suicide whilst fleeing Berlin. 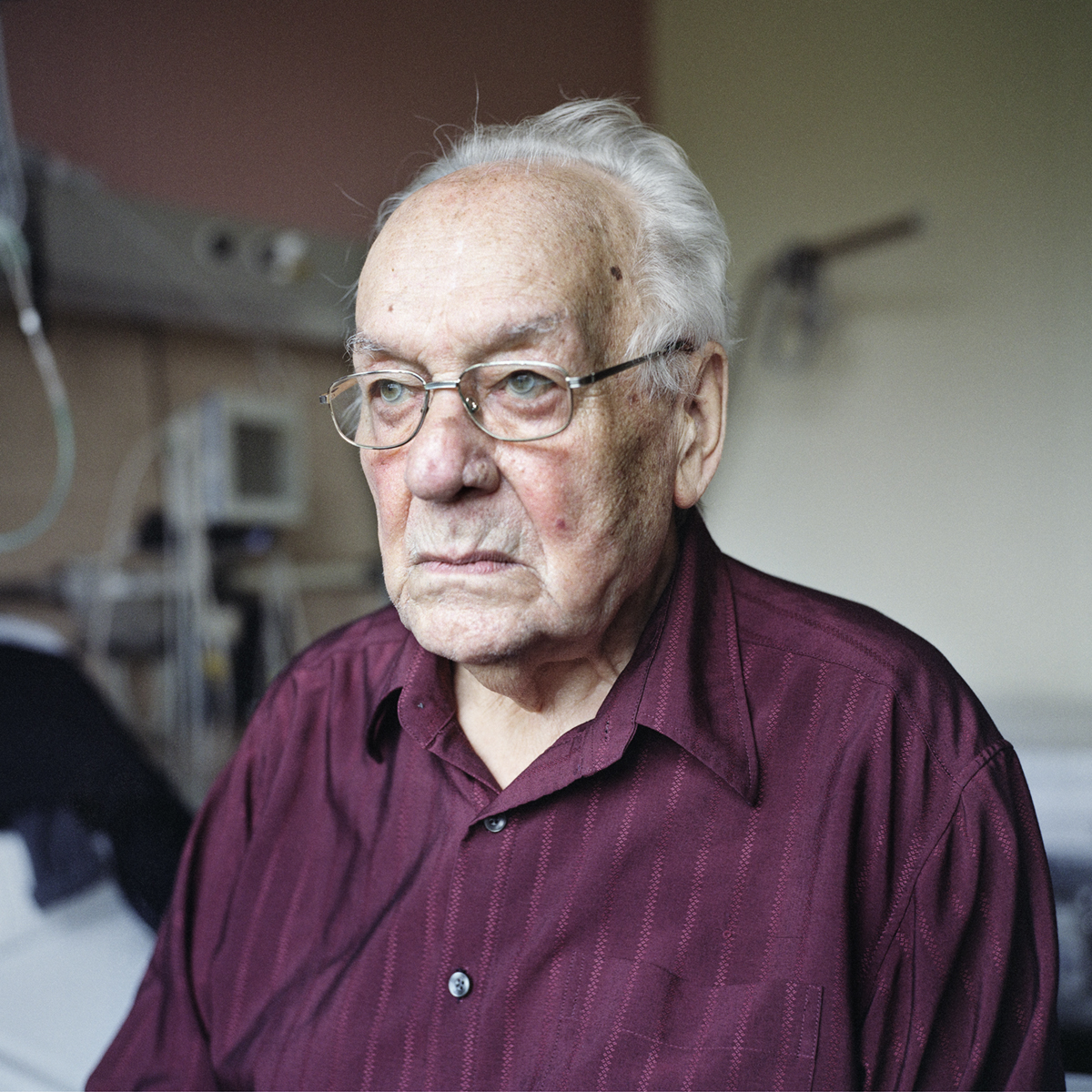 ©Gesche Würfel, Heinz Landmann, 2016, Archival Pigment Print, 15 x 15” Heinz was a soldier in the Hitler Youth task force for a short while but managed to run away when the Red Army approached Breslau (then located in Lower Silesia, Germany; now Wrocław, Poland) in January 1945. He tried to flee from Breslau twice. The first time was unsuccessful but the second time he and his family managed to get onto the last train from Breslau to Southern Germany. After a few days they arrived in Northern Germany where it took them a long time to settle down. They were regarded as refugees and often called ‘potato beetles’ as an insult.

NEXT | Bootsy Holler: Treasures >
< Nancy Baron: Into the Light | PREV