Valery Melnikov: Finalist in the 2019 Aftermath Grant by Aline SmithsonJanuary 16, 2019 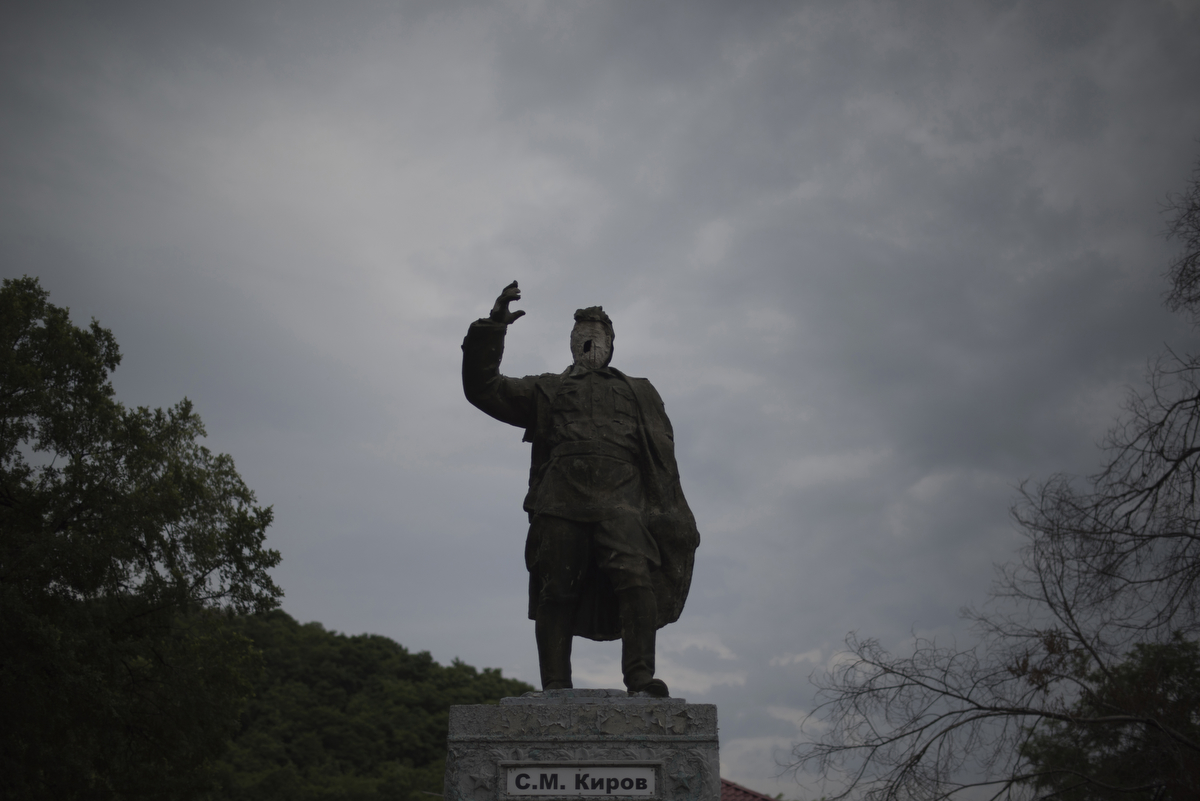 The Aftermath Project is a non-profit organization committed to telling the other half of the story of conflict — the story of what it takes for individuals to learn to live again, to rebuild destroyed lives and homes, to restore civil societies, to address the lingering wounds of war while struggling to create new avenues for peace. The Aftermath Project holds a yearly grant competition open to working photographers worldwide covering the aftermath of conflict. A 2019 finalist is photographer Valery Melnikov. The jurors for this year’s grant were Aftermath founder Sara Terry; photographer, writer and founder of The Candid Frame, Ibarionex Perello; Aline Smithson, photographer and editor of Lenscratch; and Todd J. Tubutis, Associate Director at Sheldon Museum of Art, soon to be Director at the Art Museum of West Virginia University.

One of the most important acts we can do as human beings is to simply bear witness. Photojournalist Valery Melnikov has made a career of considering humanity in the midst of horrific events. As he states, “For me as a human the most important side in this conflict was the third one –  ordinary civil people. Disaster came into their lives unexpectedly. These people appeared the participants of the military confrontation against their will. They experienced the most terrible things: the death of their friends and relatives, destroyed houses and ruined lives of thousands of people.”

In 2014, Valery began documenting war in Eastern Ukraine and has created a number of powerful series including The Black Days of Ukraine and Donbass Underground. His current project set in the Donbass region’s, Gray Zone, ” is a conditional name for the territories without a specific status, with no official government or law enforcement.” Valery’s evocative capture of people and places are layered in darkness, starkness, and loss is photography at it’s best,  and the reason that Gray Zone received a finalist nod in the 2019 Aftermath Grant. – Juror Aline Smithson 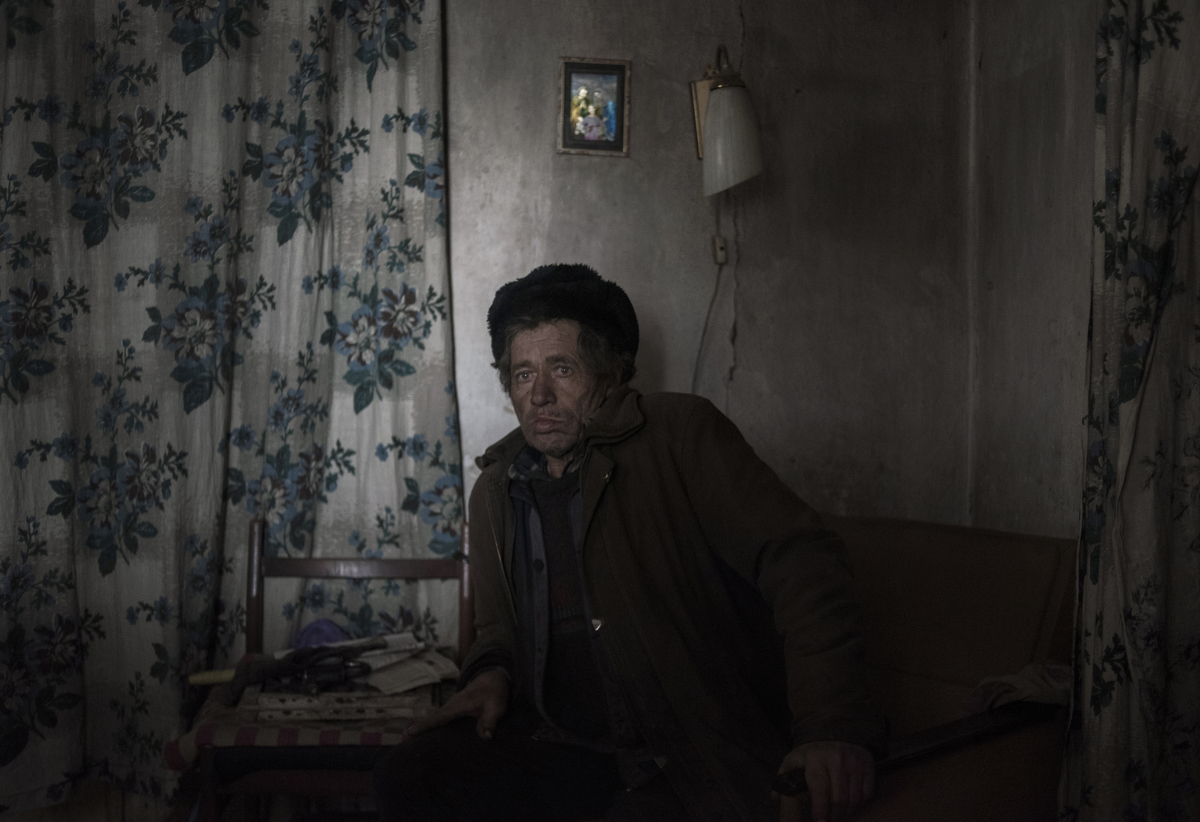 Born in Nevinnomyssk, Valery Melnikov studied journalism in Stavropol, Russia. His photographic career began when he started to work for The North Caucasus newspaper. For ten years he was a staff photographer for Kommersant publishing house and since 2009 for international news agency Rossiya Segodnya.

He has dedicated himself to documenting the political and social life of societies in conflict. Valery’s professional biography includes coverage of Chechen war, conflict between Georgia and South Ossetia, Lebanese war in 2006, uprising of Mali Republic, Syrian civil war. In 2014, Valery began documenting war in Eastern Ukraine. This work continues in his current ongoing project, Black days of Ukraine, about ordinary civil people who became the participants of the military confrontation against their will. 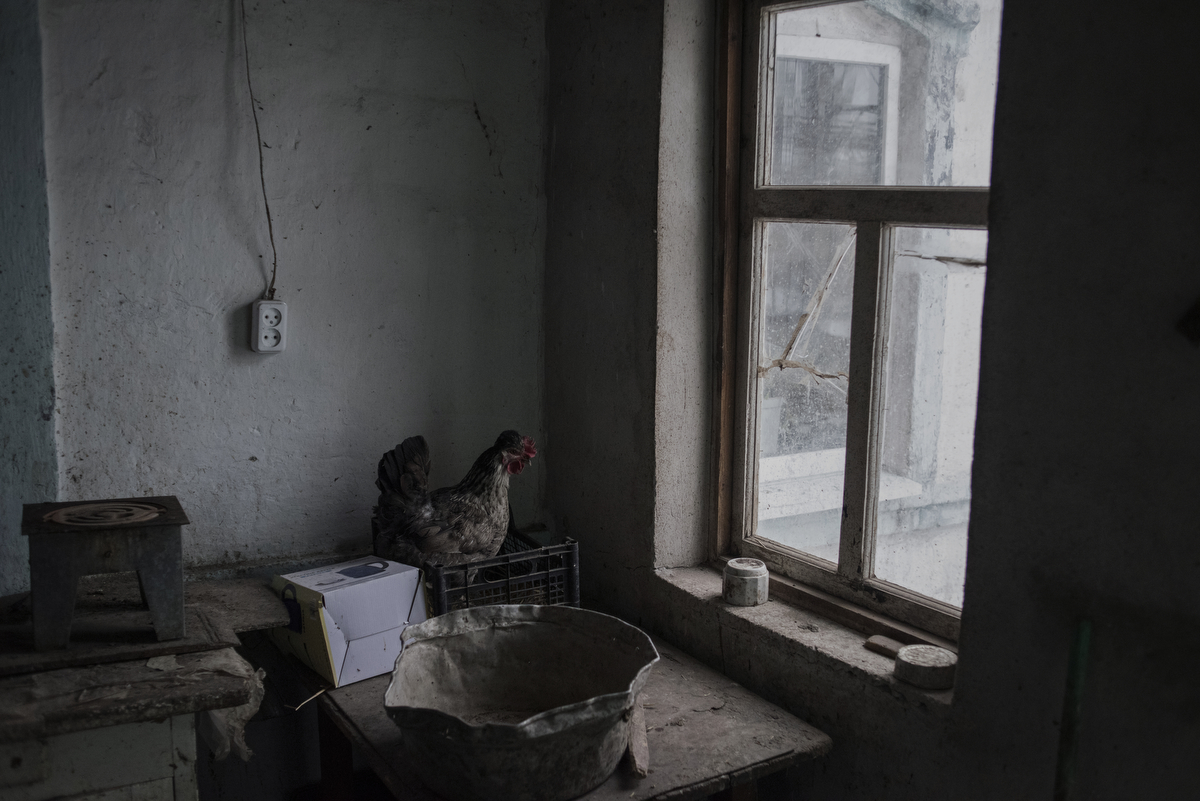 People of Donbass truly hoped the war would end quickly, and peace would come back to their long-suffering land. Three years went by. The active phase of the conflict is over, but there is no peace yet. With this war, hearts of people were filled with uncertainty, despair, and complete luck of hope. Along the contact line of the fighting sides, so called “Gray Zone” has been created. 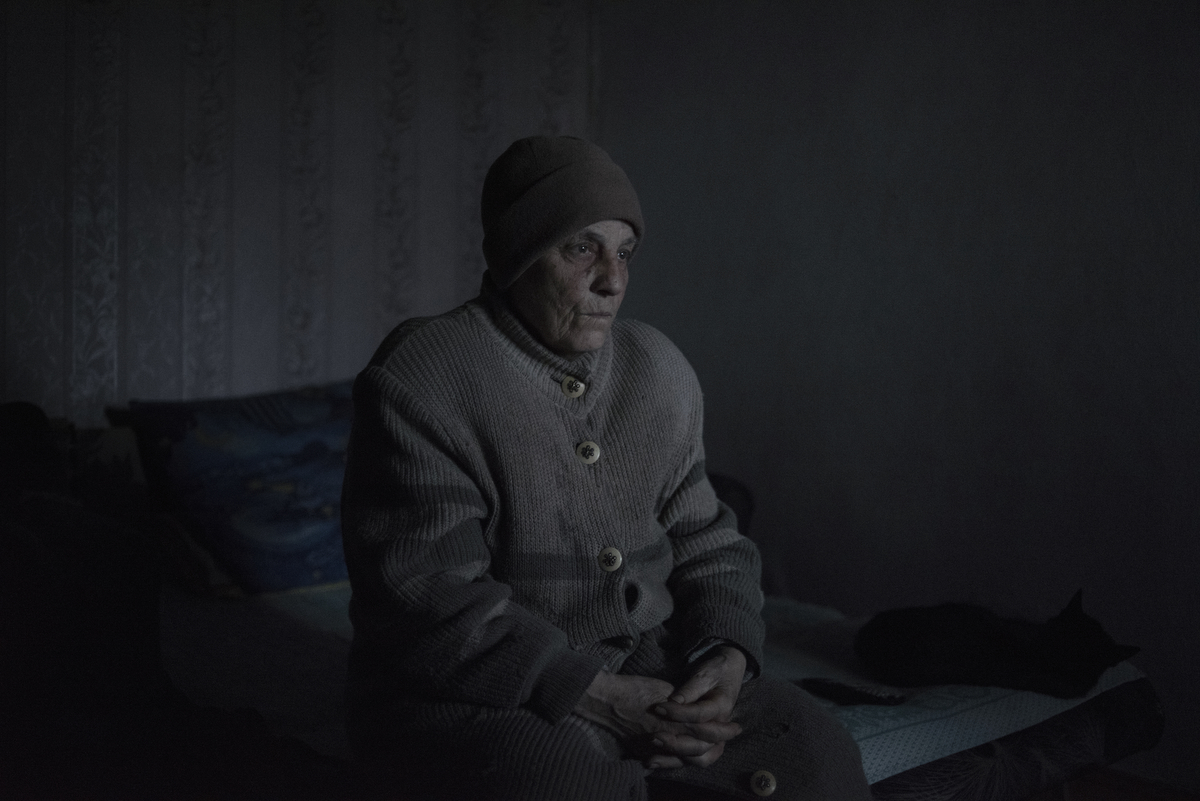 ©Valery Melnikov/Sputnik, Resident of the village of Kominternovo of the Donetsk region Zinaida Pavlova, 76 years old.

This is a conditional name for the territories without a specific status, with no official government or law enforcement. There are no operational hospitals or schools there, and there is no work. People’s lives are in constant danger because of the fighting. This protracted long lasting conflict and the foggy future turned the entire Donbass region into the territory of the Gray Zone. Zones without any clear boundaries in space and time. The Gray Zone is not only a territory, a piece of land, it is a sensation of a person completely immersed in the darkness of the unknown in the face of war. This is the vital state of existential loneliness of a person who has lost all the hope…

The ongoing project “Gray Zone” is a new stage of my work in Donbass region. – Valery Melnikov 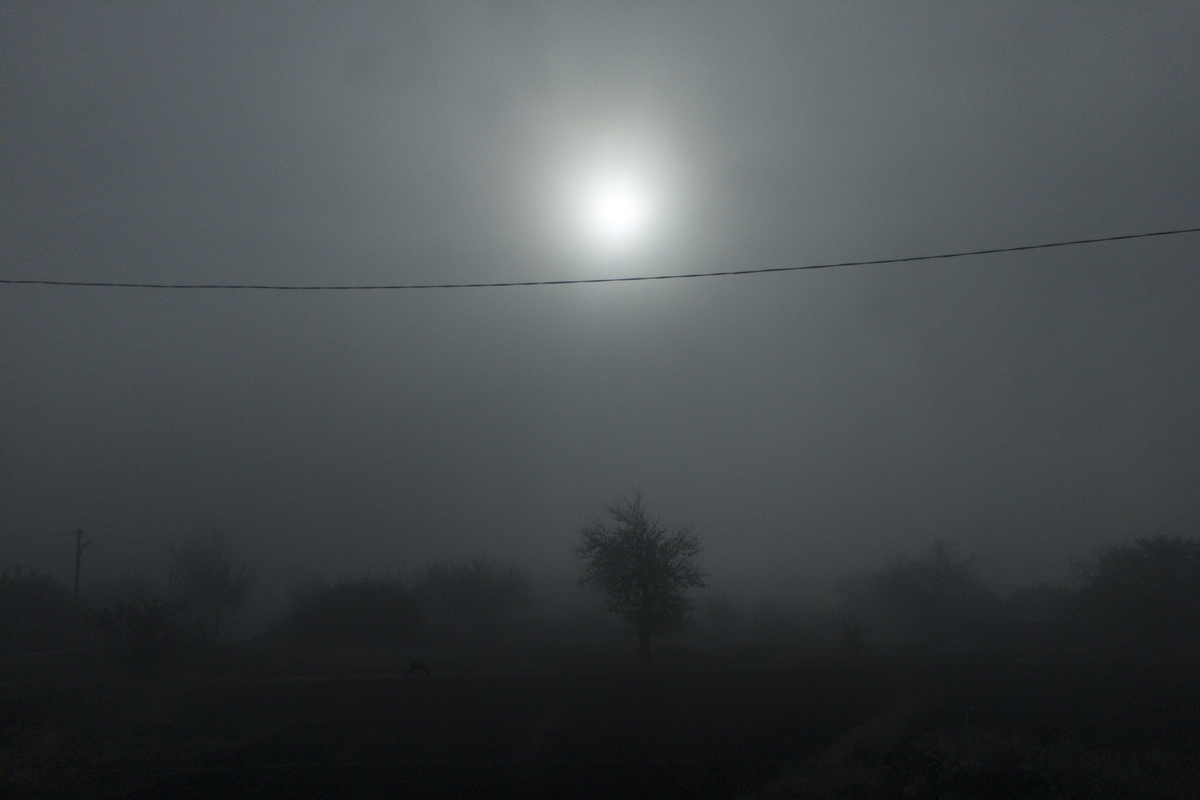 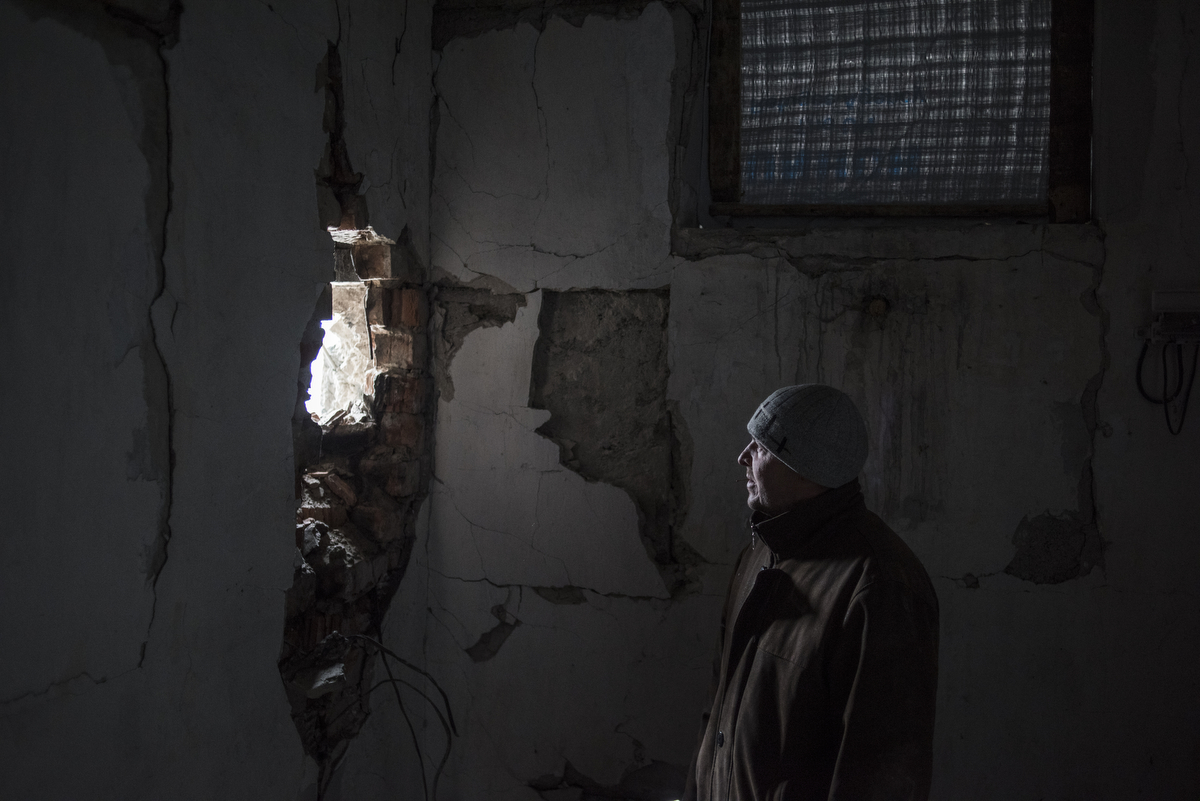 ©Valery Melnikov/Sputnik, A local resident looks at a hole from a shell in the wall in the village of Donetsk, Lugansk region 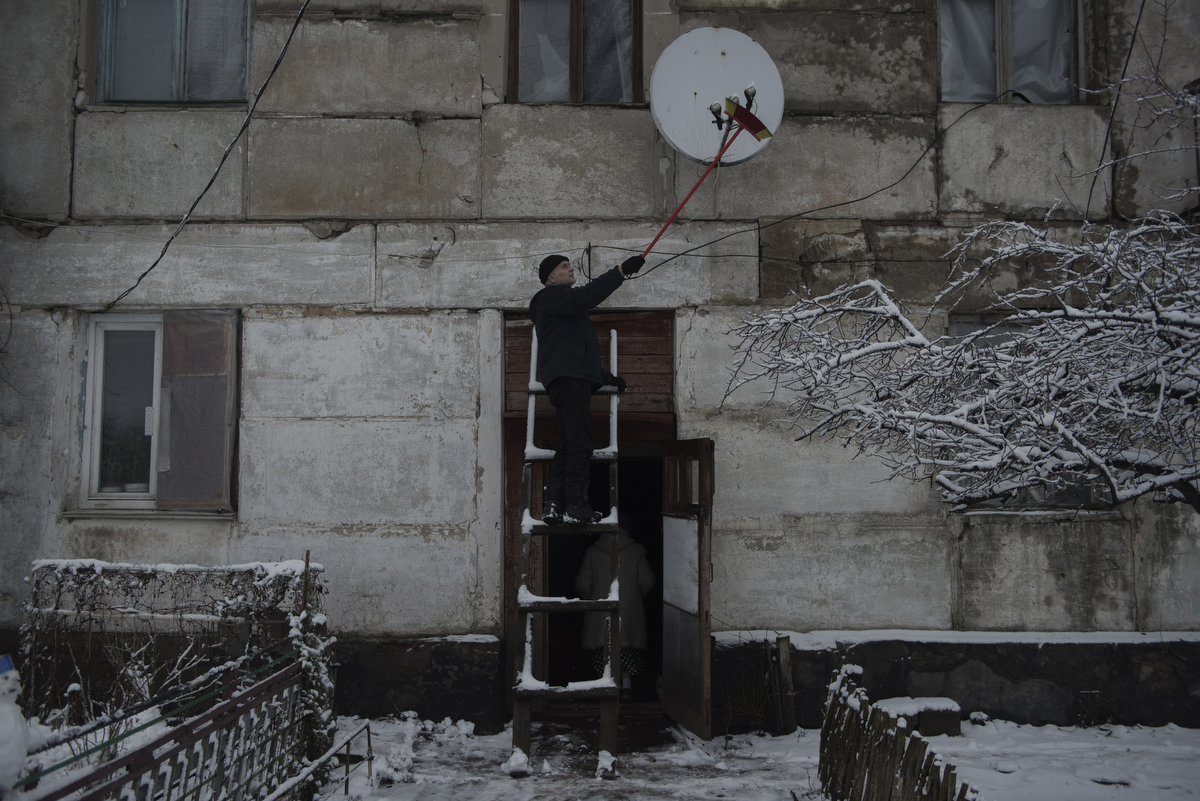 ©Valery Melnikov/Sputnik, Local man cleans satellite antenna, which is the only source of television. The settlement Molodezhnoye located near the front line. Lugansk region, Ukraine 8. Aftermath of an attack 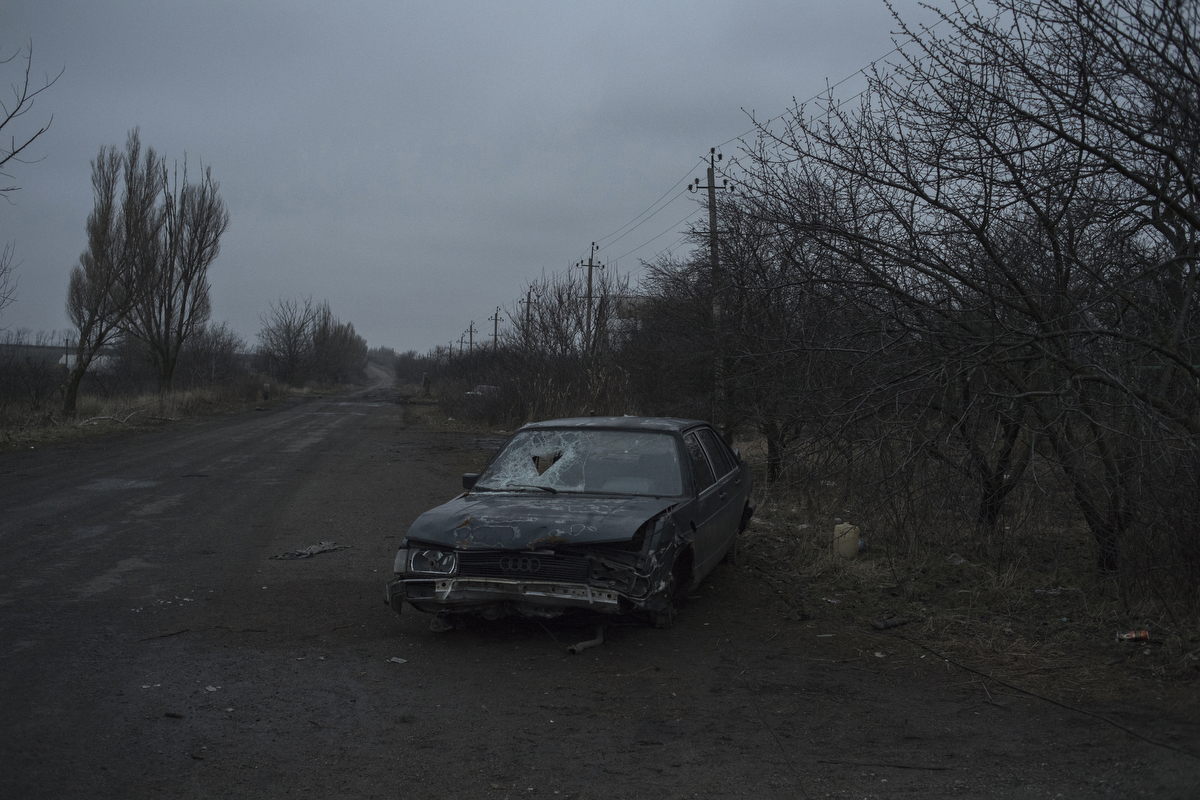 ©Valery Melnikov/Sputnik, Aftermath of an attack on the village of Kominternovo. Donetsk region, Ukraine 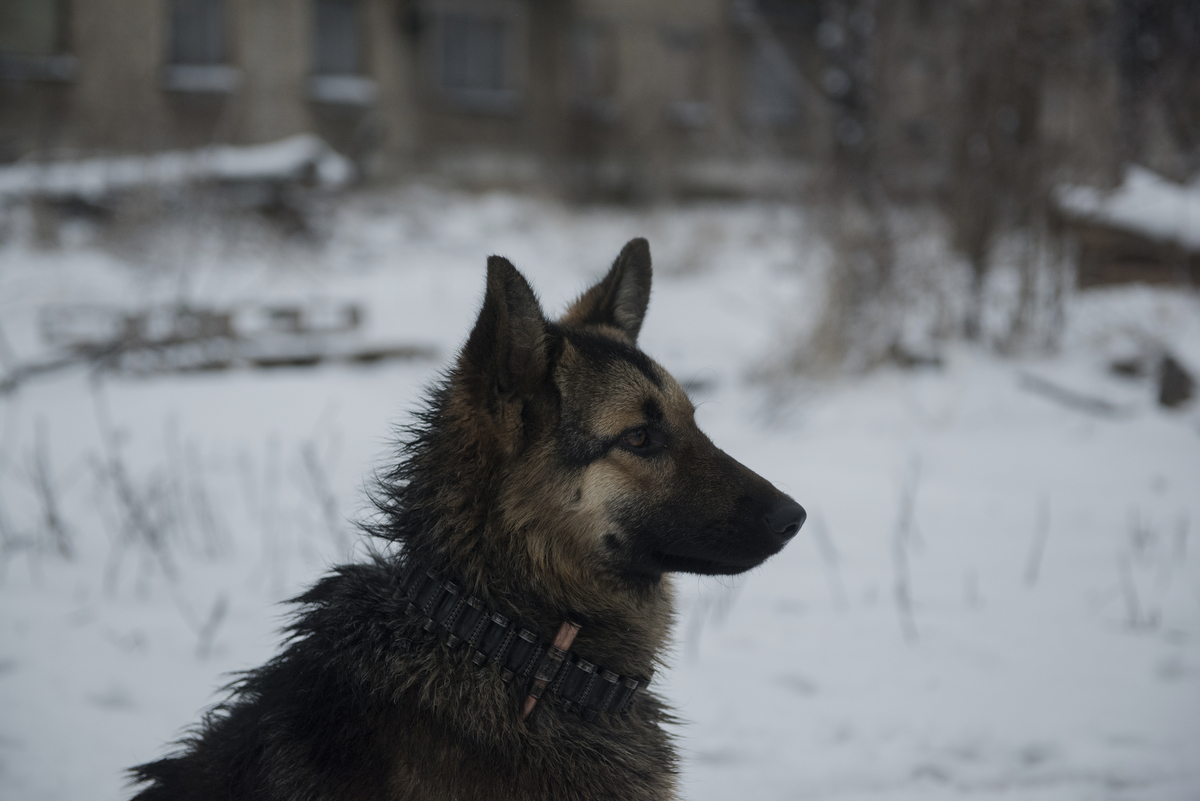 ©Valery Melnikov/Sputnik, The dog in the collar of the machine gun tape. Settlement Molodezhnoye located near the front line. 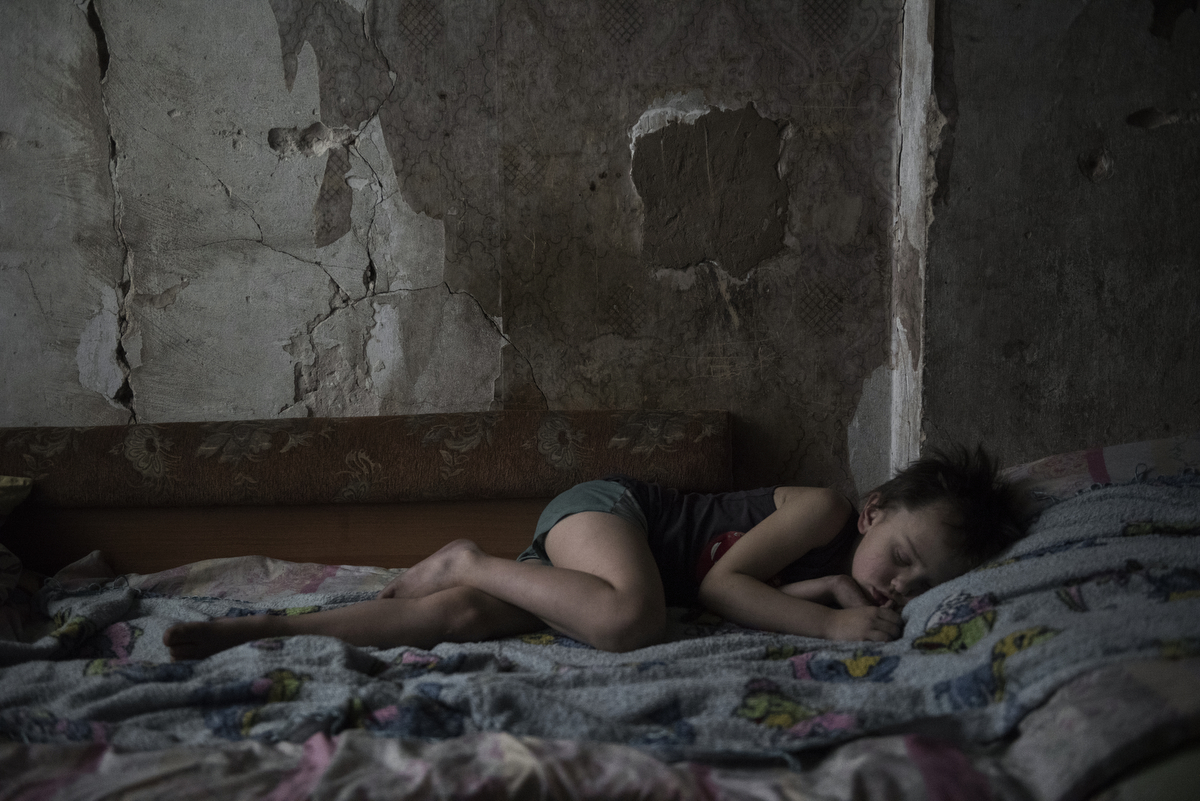 ©Valery Melnikov/Sputnik, A child in a house near the front line. Outskirts of Donetsk. Ukraine 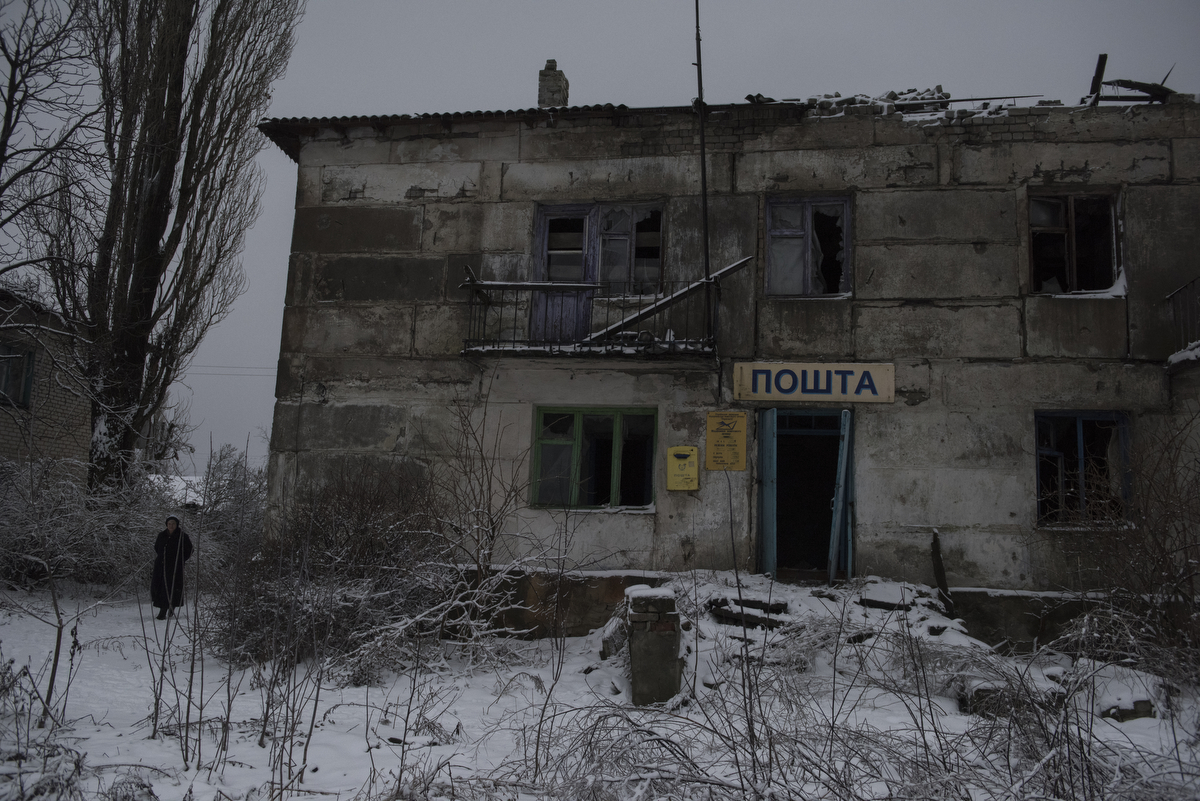 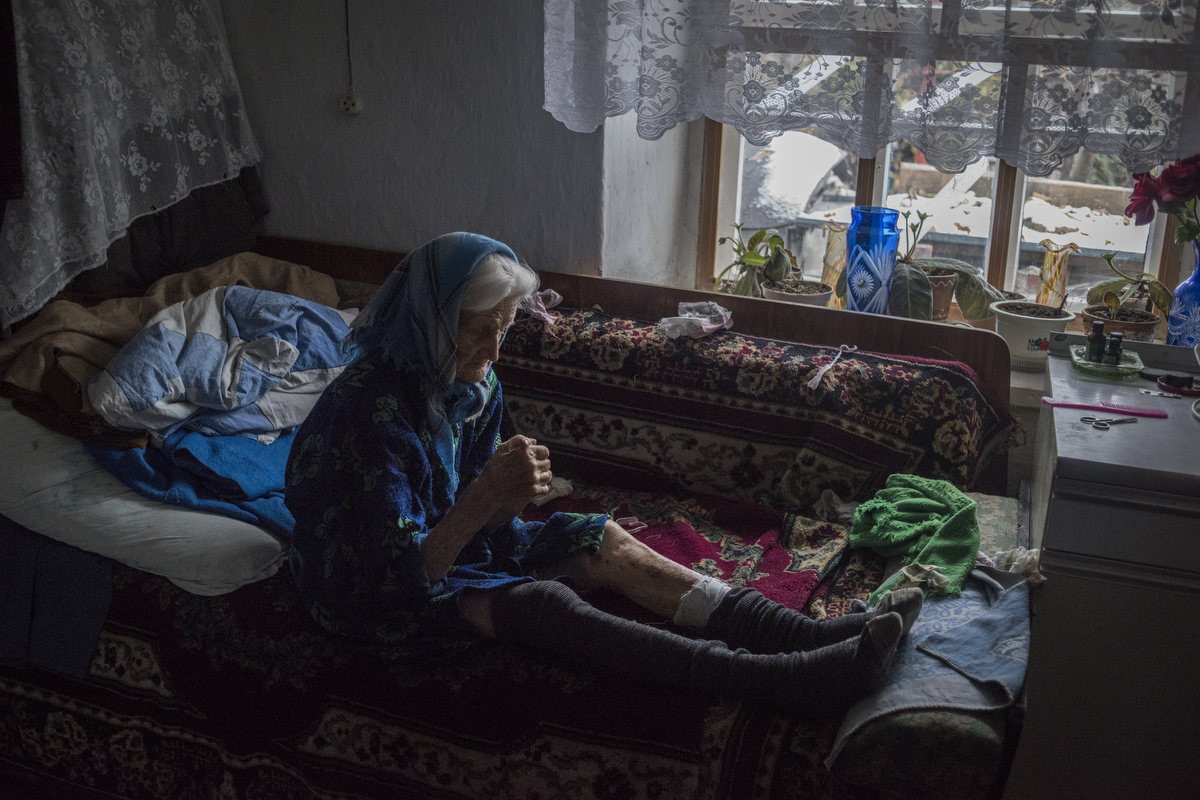 ©Valery Melnikov/Sputnik, A local resident in one of the districts of the Donetsk region. After the start of the conflict in the Donbas, many villages in the frontline zone were empty. Lonely old men and women are abandoned and forgotten by relatives and social services. 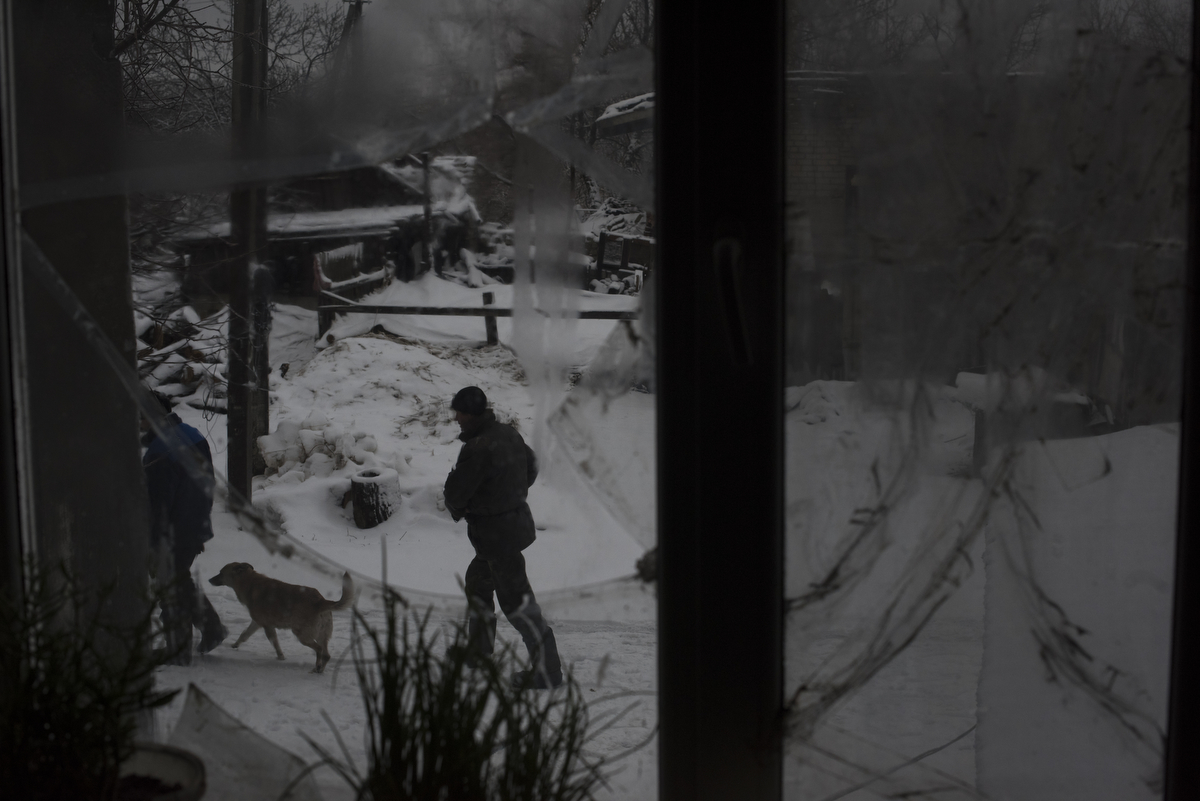 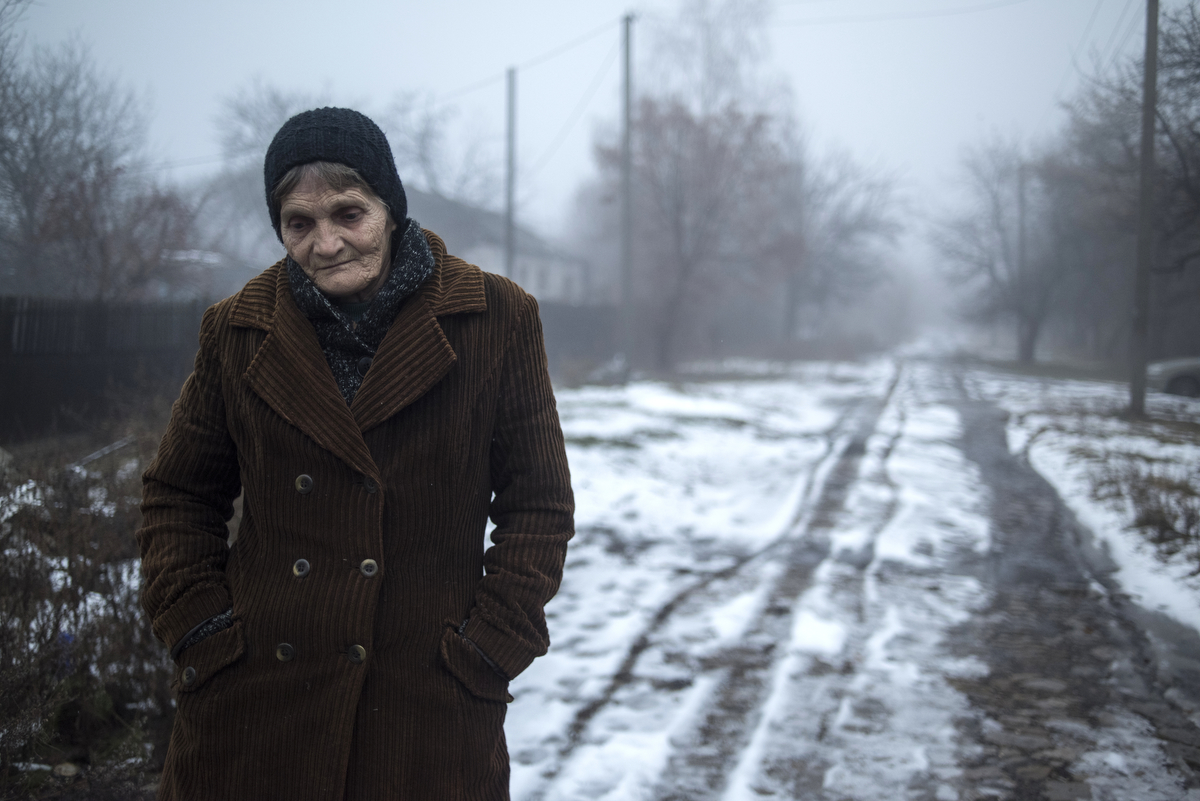 ©Valery Melnikov/Sputnik, The last residents of the village of Shakhty 6-­‐7 in the north-­‐western outskirts of the city of Gorlovka in the Donetsk region. 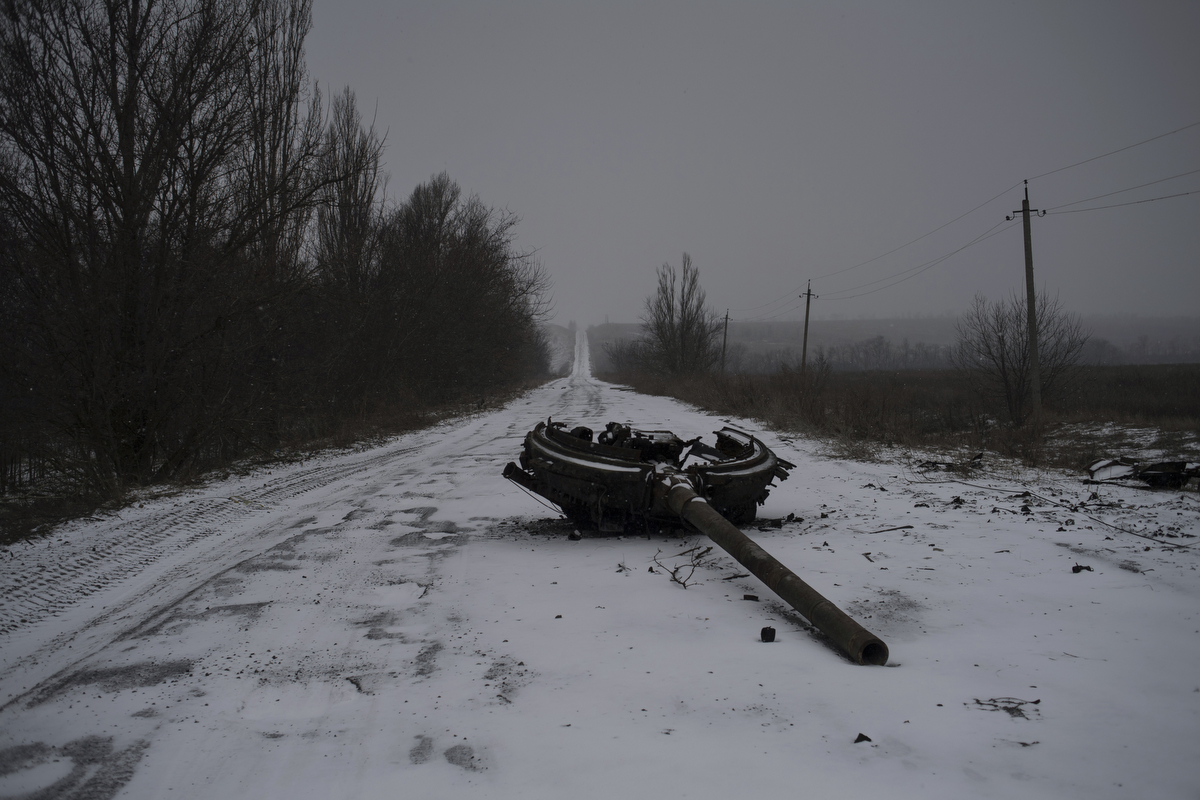 ©Valery Melnikov/Sputnik, Destroyed tank. Aftermath of an attack on the village of Kominternovo, Donetsk Region.

The Aftermath Project is an outcome of photographer and writer Sara Terry’s five-year-long project, Aftermath: Bosnia’s Long Road to Peace, about the aftermath of the 1992–95 war in Bosnia and Hercegovina. She completed her work in 2005, convinced that a broader public understanding and discussion of aftermath issues was crucial in a world where the media regularly covers war, but rarely covers the stories that follow the aftermath of violence and destruction. Sara founded The Aftermath Project as a way to help photographers tell these crucial stories.

The Aftermath Project is a non-profit organization committed to telling the other half of the story of conflict — the story of what it takes for individuals to learn to live again, to rebuild destroyed lives and homes, to restore civil societies, to address the lingering wounds of war while struggling to create new avenues for peace. The Aftermath Project holds a yearly grant competition open to working photographers worldwide covering the aftermath of conflict. In addition, through partnerships with universities, photography institutions and non-profit organizations, the Project seeks to help broaden the public’s understanding of the true cost of war — and the real price of peace — through international traveling exhibitions and educational outreach in communities and schools.