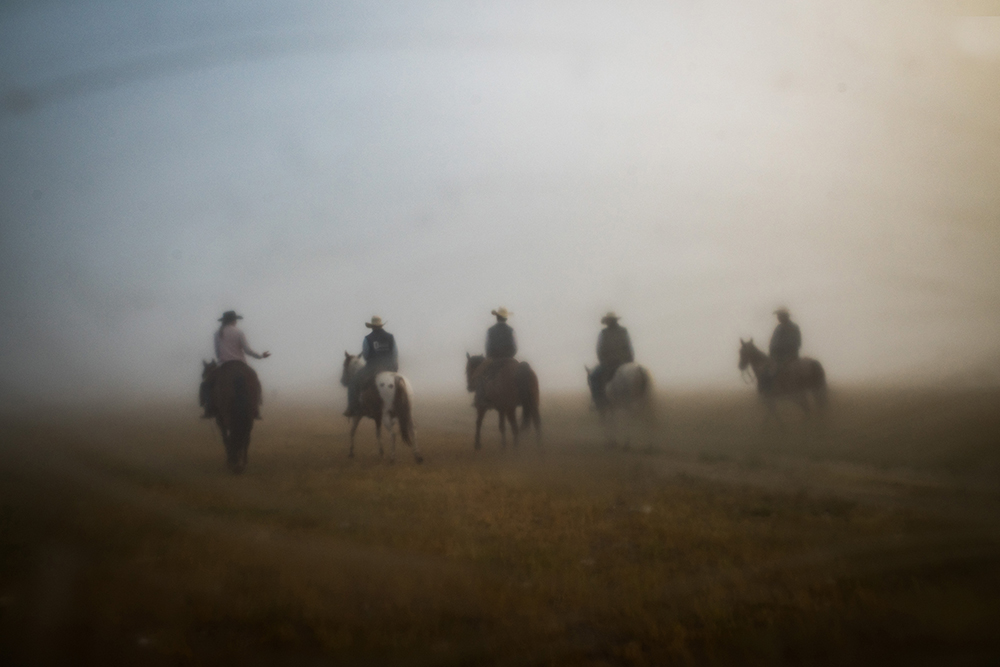 ©Mark Kauzlarich, 45º25’37.9″N, 102º17’10.7″W. 113 miles from the nearest McDonald’s. The Arneson family and their employee Riley Cihak ride their horses through thick morning fog on their ranch in the old town of Chance, SD, on July 31, 2017. The Arneson family moved from Montana to South Dakota due to rising land prices and taxes, and slowly accumulated the entirety of what was once a small town in the area with a post office until the late 1950s.

Population loss in rural United States communities is an issue that many people may think they know about. One of the challenges for visual journalists reporting on topics that viewers may be familiar with is getting people to look again, and to see what they think they know in a new way. Through his original concept of documenting the places furthest away from McDonald’s fast-food restaurants, Mark Kauzlarich gives viewers an entry point into the story of population loss. His striking images hook us, and the stories of the people he has photographed hold our attention. – Blue Earth Alliance

Originally from Wisconsin, Mark Kauzlarich is a New York City-based documentary photographer, National Geographic Explorer, contributor to and originator of the hashtag for Everyday Rural America. He holds a Master’s of Arts in Journalism from the University of Missouri and dual Bachelor’s degrees in Political Science and Middle East Studies from the University of Wisconsin. Kauzlarich speaks and reads two dialects of Arabic. In 2015, Kauzlarich interned at The New York Times. His work has been featured by TIME’s Lightbox and The New York Times’ Lens Blog. 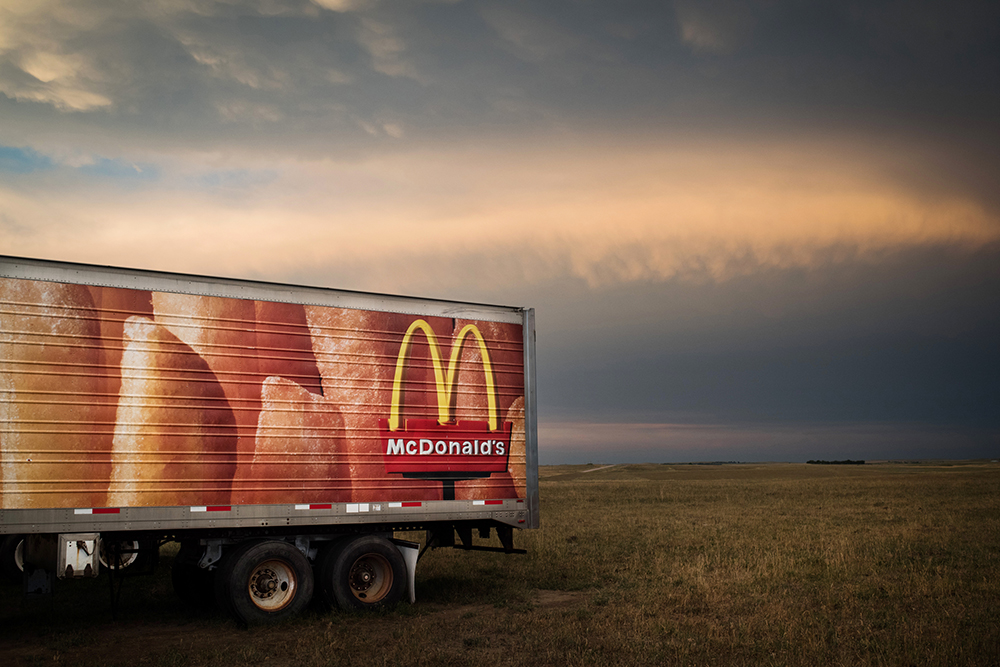 ©Mark Kauzlarich, 45°31’48.6″N 102°48’17.6″W. 107 miles from the nearest McDonald’s. A McDonald’s trailer sits in a field outside in the small town of Prairie City, SD on July 31, 2017. Not far from the former McFarthest point in America, a local rancher bought two semi trailers for storage and left them in a field, one of which now acts as a reminder of the ubiquitous nature of corporate America.

“The McFarthest Place” gives insight into the social and economic burden of population loss in one of the American Midwest’s most rural places. This project uses intimate and timeless images of the Great Plains and agrarian life combined with modern GPS mapping to convey the difficulties of rural isolation that drive population loss. By one measure, Meadow, SD, is the most rural town in America. In 2009, a nearby spot was the farthest place in the continental U.S. from a McDonald’s. While the 80.8 percent of Americans living in urban areas have quick access to goods and services, symbolized by the ubiquitous McDonald’s, in Meadow you are 145 miles in any direction from the iconic restaurant. More importantly, specialized medical care, inexpensive groceries, and often jobs are scarce if nonexistent. And while people here attempt to lean on each other to survive, Perkins County, where Meadow is located, has lost 73.7 percent of its population since 1910. -Mark Kauzlarich 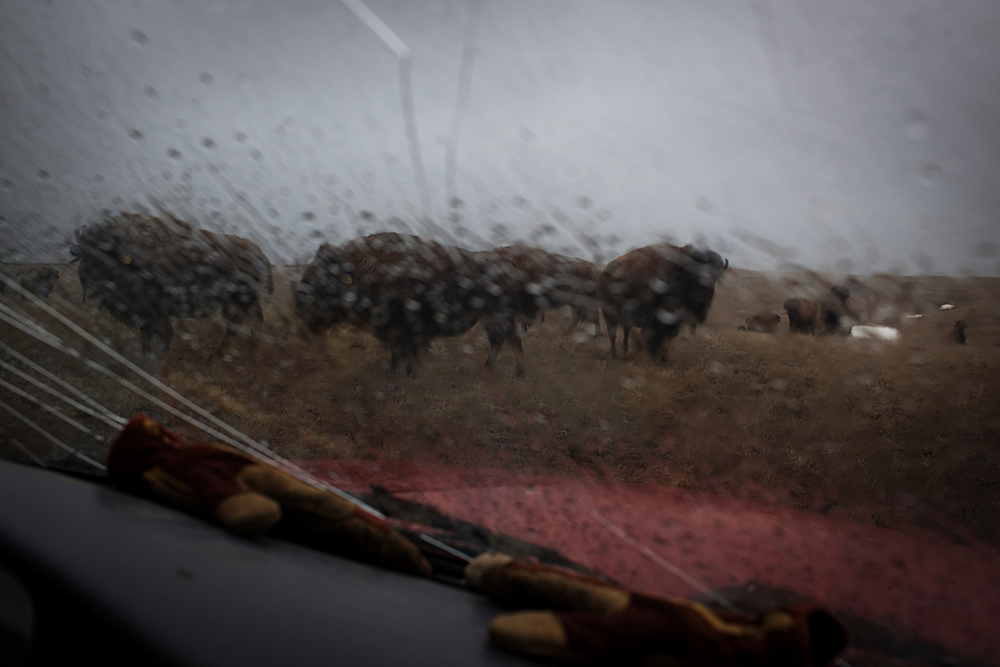 ©Mark Kauzlarich, 45º19’04.0″N, 102º10’43.9″W. 120 miles from the nearest McDonald’s. A small number of America Plains Bison are seen through the cracked windshield of rancher Jamie Hepper’s pickup truck in Meadow, SD, on April 12, 2018. Hepper is a third-generation bison rancher, starting her own business with the help of her father, following in the footsteps of her grandfather who was one of the first to commercially ranch bison on a large scale, helping to bring the species back from the brink of extinction. 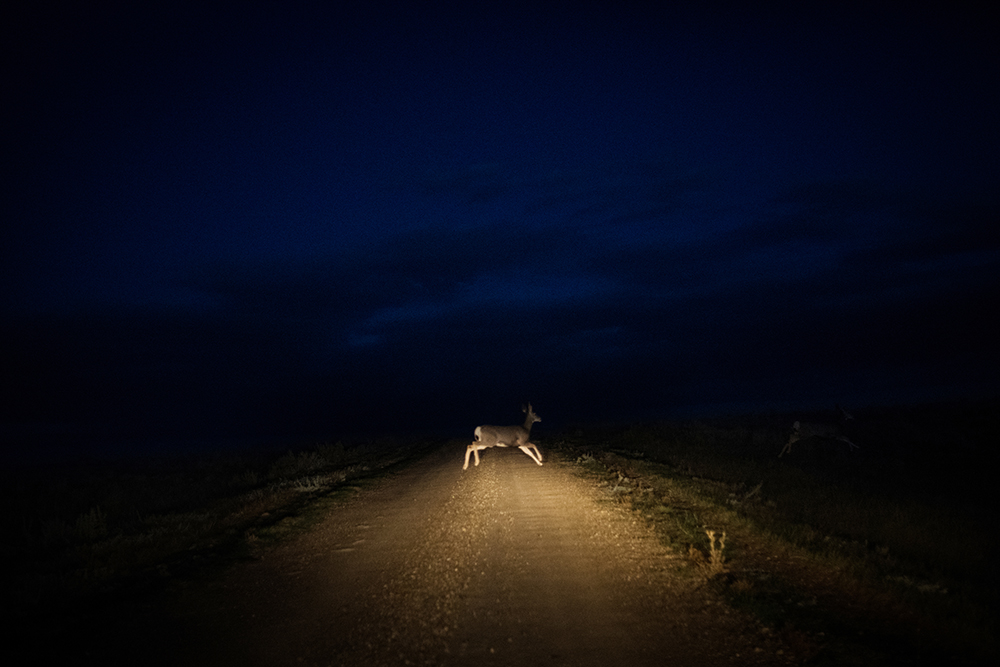 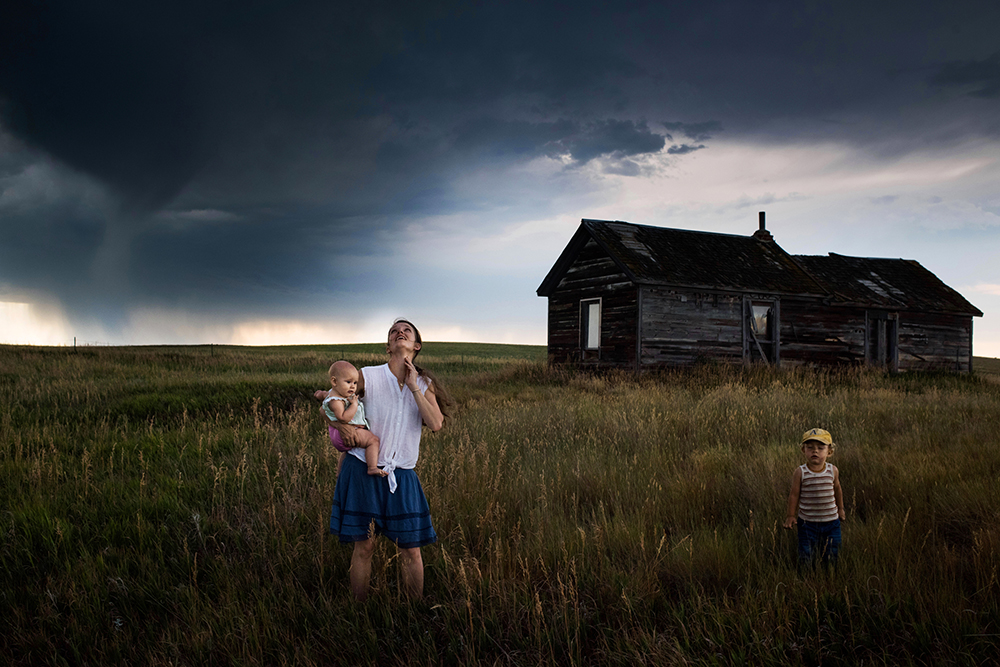 ©Mark Kauzlarich, 45º33’14.2″N, 102º30’36.1″W. 114 miles from the nearest McDonald’s. Eliza Blue holds her daughter Emmy as her son Wesley closes his eyes and feels the coming storm winds on his face. They stand near an abandoned farmhouse on their leased land in Bison, SD. Ranchers and farmers have spent much of the droughty summer watching clouds on the horizon, hoping storms would hit, but most pass by without rain. 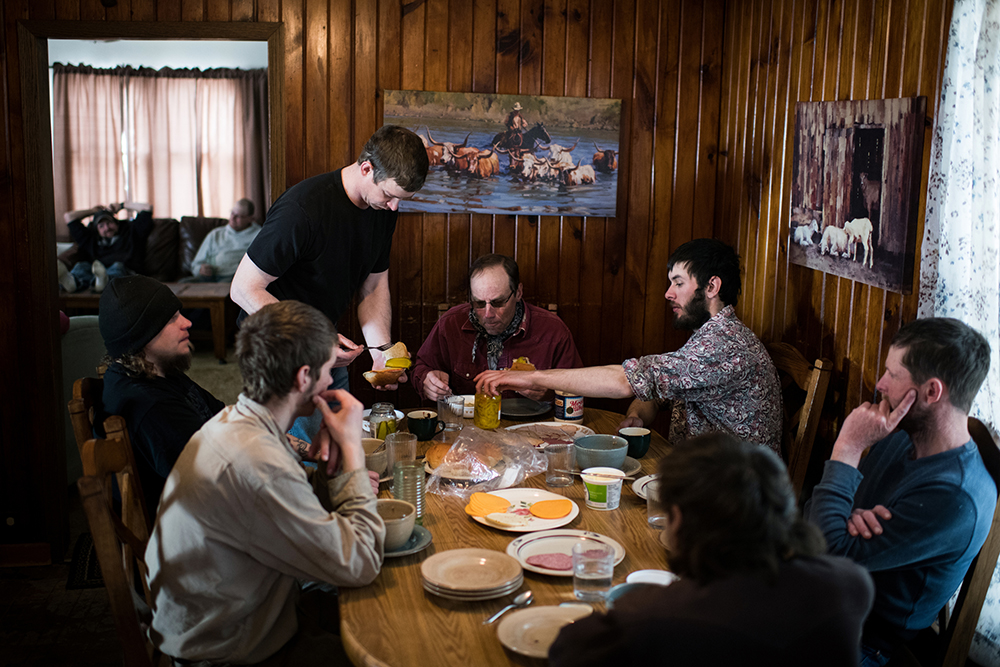 ©Mark Kauzlarich, 45º29’43.2″N 102º19’59.6″W. 120 miles from the nearest McDonald’s. A group of men sit down around the dinner table for a meal of soup and sandwiches as they take a break from shearing sheep in 20-degree weather and substantial winds at the Kronberg ranch in Meadow, SD on April 7, 2018. Sheep need to be sheared yearly for their health, but the cold weather caused issues, forcing the delay of shearing some of the herd, putting the rest in a barn. And for all the work, wool is worth hardly any money to working ranchers. 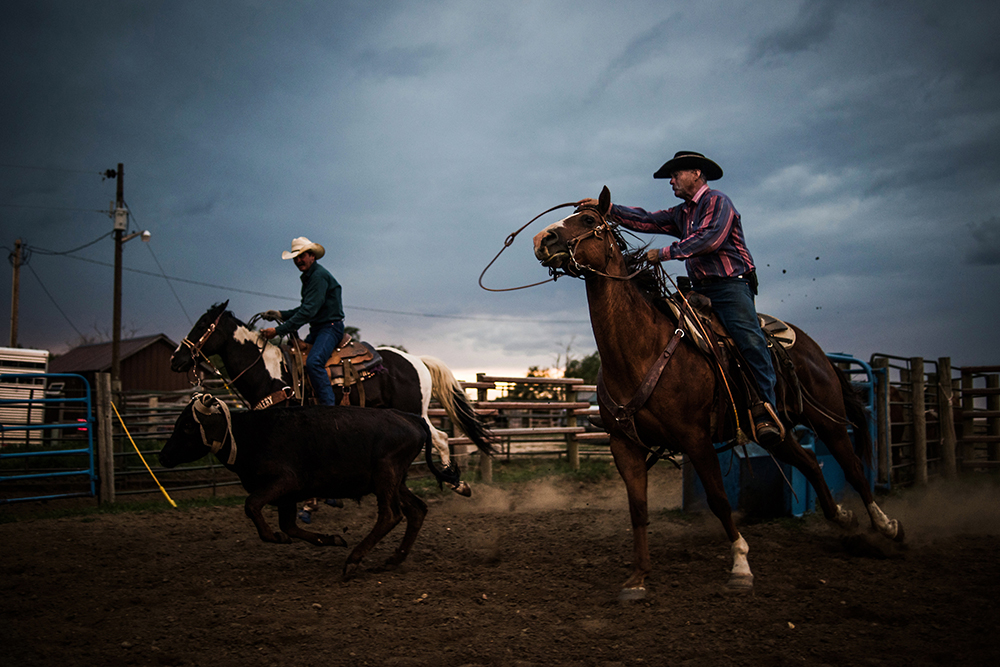 ©Mark Kauzlarich, 45º31’58.9″N, 102º15’19.0″W. 121 miles from the nearest McDonald’s. Scott Storm swings a rope as he practices team roping with his friend Kenny Kocer at Kocer’s ranch in Meadow, SD. Storm was known as a great roper on teams years ago, but stopped after he was married; he didn’t rope again until his son was old enough to start. 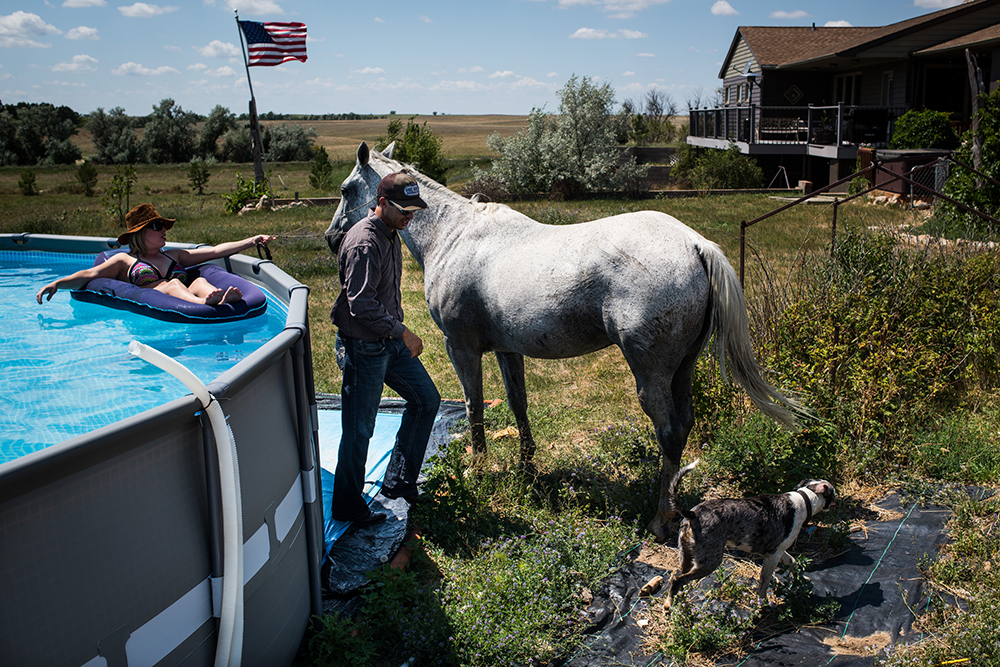 ©Mark Kauzlarich, 45°30’35.5″N 102°13’48.2″W. 124 miles from the nearest McDonald’s. Jessica Lawson holds the war bridle on Fred the horse as her boyfriend Shane Yalowizer goes to get ready for a swim on his ranch in Meadow, SD, on July 28, 2017. South Dakota spent the summer in the midst of a state of emergency-level drought that caused many ranchers to sell parts of their herds to pay for feed and farmers to harvest their crops at a loss. Yalowizer works for the U.S. Department of Agriculture’s Natural Resources Conservation Service helping ranchers apply for funds to protect against drought or mitigate the disastrous results, but providing federal aid is somewhat of an irony in a county that voted 80 percent for President Donald Trump’s Republican administration. 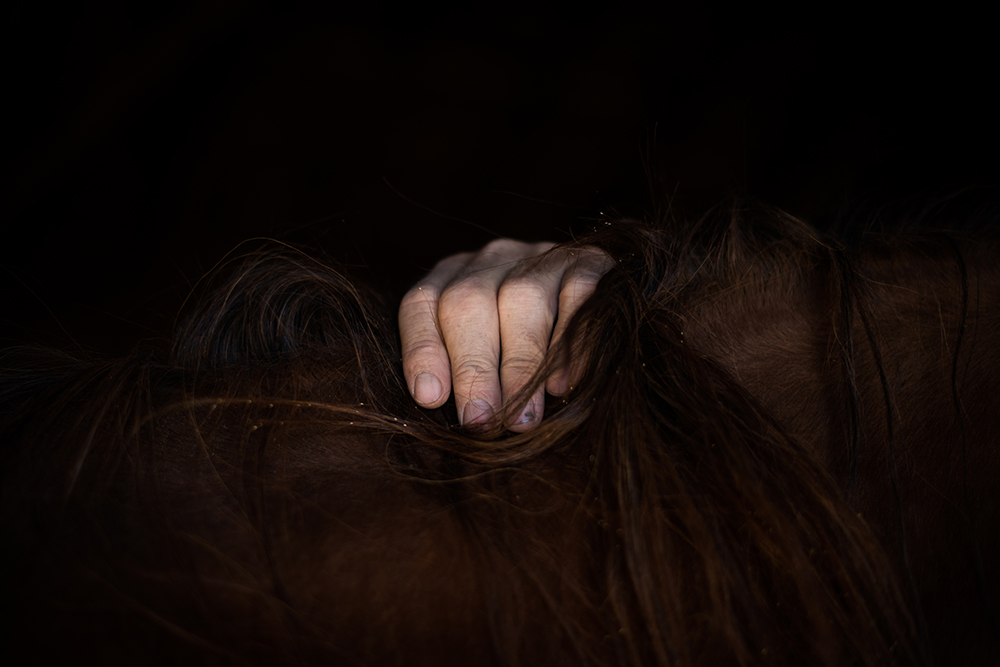 ©Mark Kauzlarich, 45°24’42.3″N 102°16’54.3″W. 112 miles from the nearest McDonald’s. Randy Hapney holds the neck of a horse while doing chiropractic work on a ranch on the old abandoned town of Chance, SD. Equine chiropractic work was generally looked at with suspicion for years, but more ranchers have begun to use chiropractic treatments to fix issues with horses to keep them healthy and working longer, a sign of adaptations in a world that often looks nostalgically unchanged over the century. 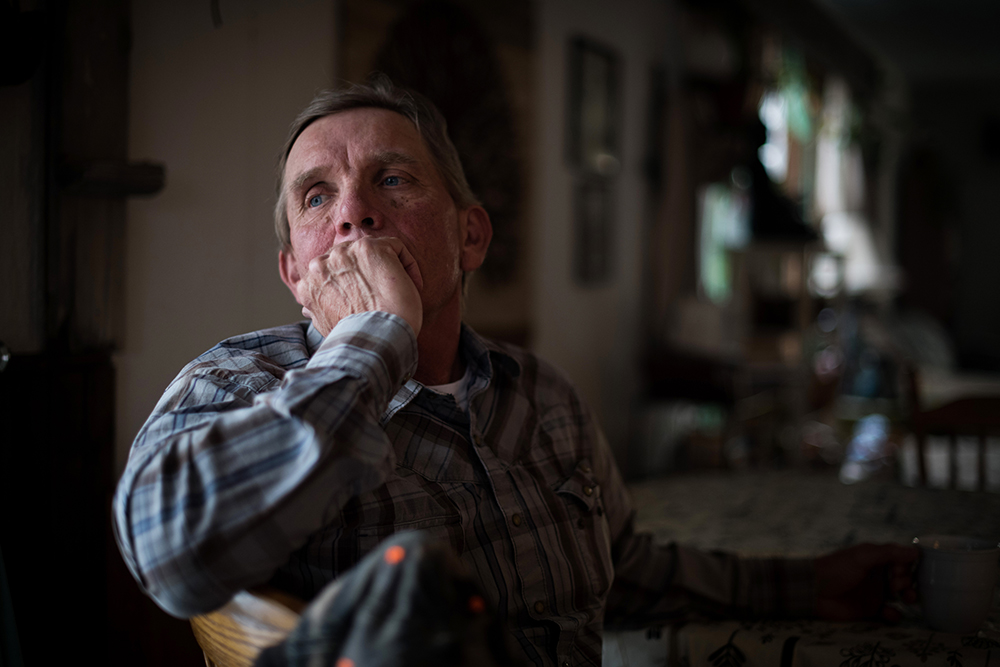 ©Mark Kauzlarich, 45º32’31.3″N 102º29’52.1″W. 110 miles from the nearest McDonald’s. Sion Hanson sits in a neighbor’s home and drinks coffee before dinner in Bison, SD, on April 6, 2018. A maintenance worker for the city of Bison, he wakes up early every morning to drink coffee, smoke a cigarette, and play cribbage online. He has played over 35,000 games on Yahoo. At almost 60 years old, he still dreams of owning a small ranch with a herd of bison. 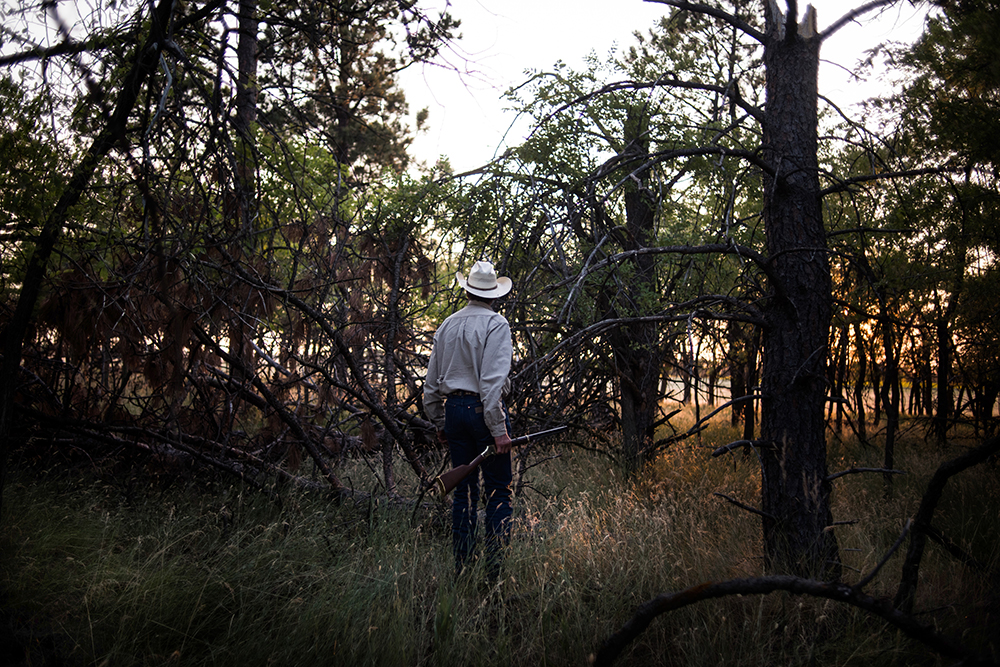 ©Mark Kauzlarich, 45°31’54.3″N 102°15’32.6″W. 121 miles from the nearest McDonald’s. Kenny Kocer pauses in a clearing of trees as he tracks a skunk he shot on his land in Meadow, SD. Kocer grew up on a local Cheyenne reservation, despite being far below the blood quantum to qualify for membership, and like many in the area holds prejudices against Native Americans. 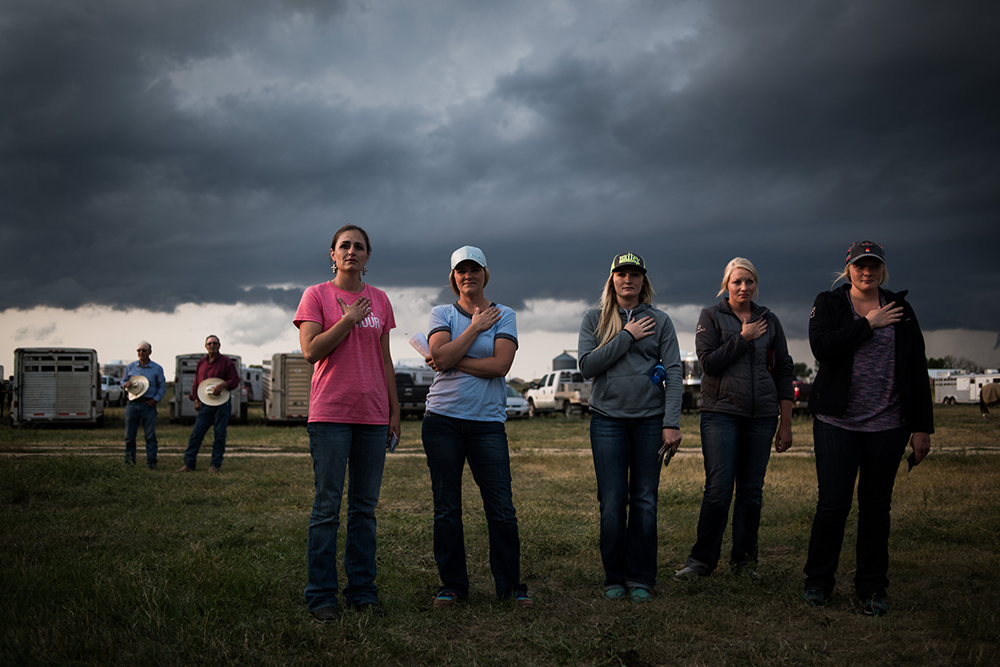 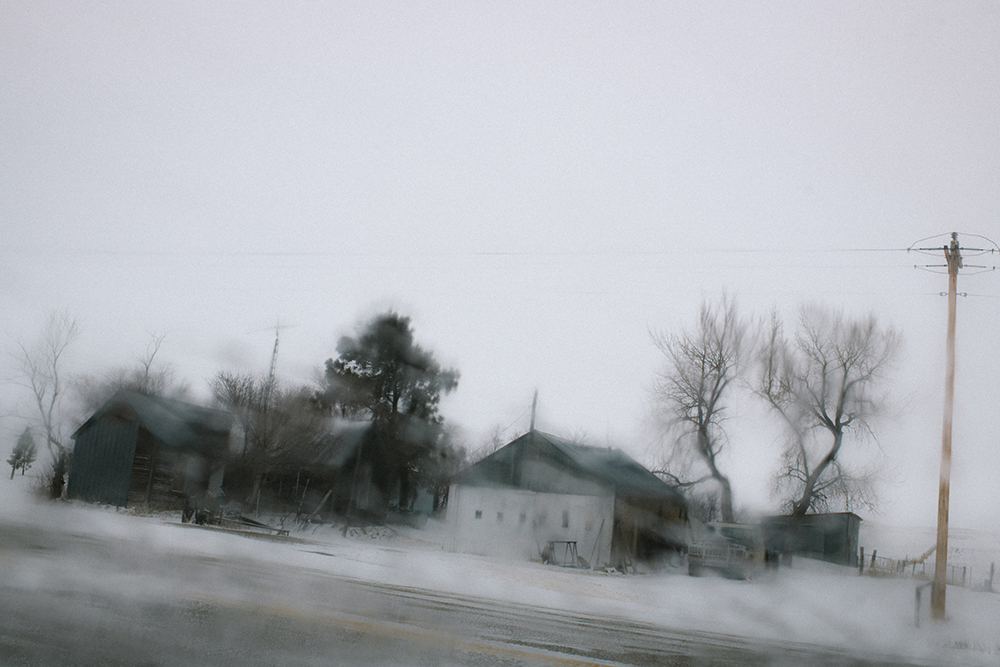 ©Mark Kauzlarich, 45º31’48.9″N 102º12’59.8″W. 123 miles from the nearest McDonald’s. A derelict ranch, neglected for 7 months after its owner died last July, is seen through the icy window of a car after an early-spring snowstorm in Meadow, SD, on April 8, 2018. Perkins County has lost 74 percent of its population since 1910 and in the past 7 months, four residents of Meadow have died, lowering the population by 11 percent in less than a year. 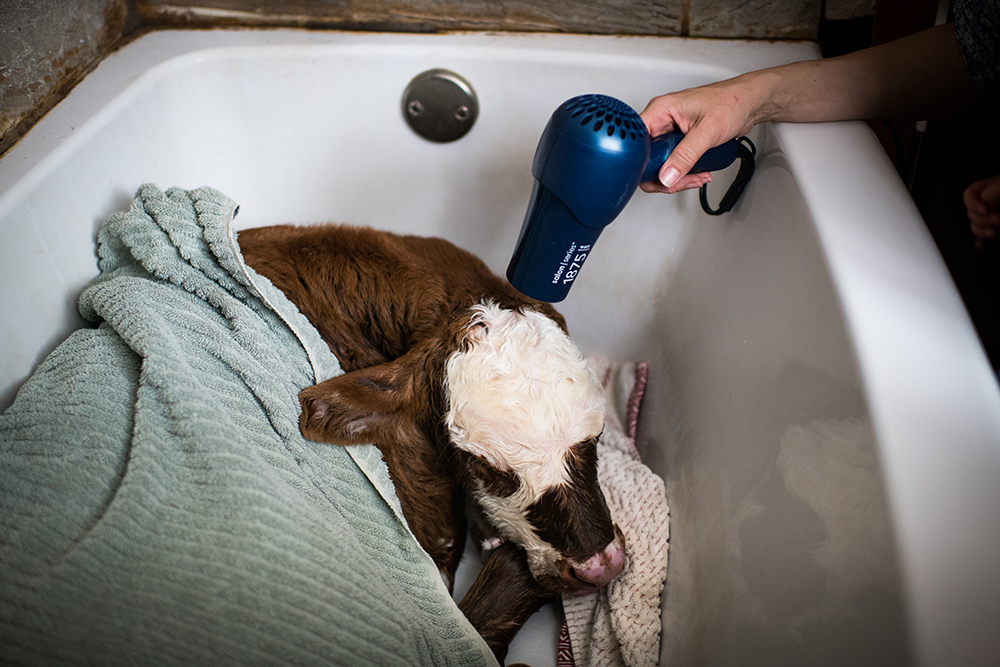 ©Mark Kauzlarich, 45°32’31.2″N 102°29’52.2″W. 110 miles from the nearest McDonald’s. Eliza Loughlin blows a hairdryer over the cold and wet fur of an hour-old calf, born in the middle of a blizzard and brought in to the family bathtub by her husband Max Loughlin, in Bison, SD, on April 13, 2018. It was the second time during calving that a calf ended up in the bathtub, the third calf brought into the house to be saved, and fourth animal including a baby lamb that Eliza nursed back to health from being unable to stand. 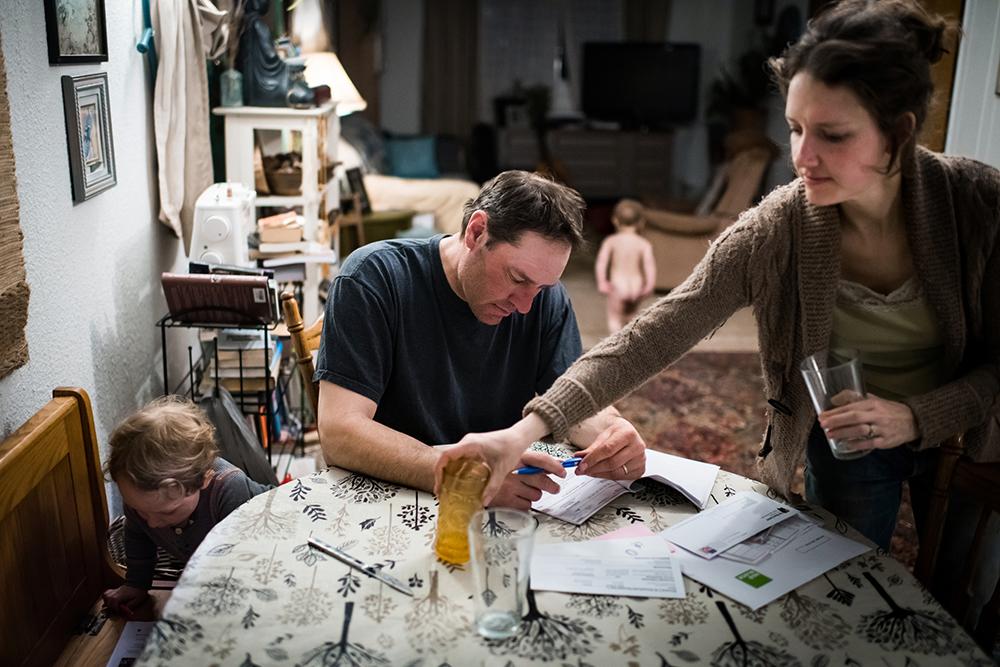 ©Mark Kauzlarich, 45º32’31.3″N 102º29’52.1″W. 110 miles from the nearest McDonald’s. Max Loughlin works on his taxes as his wife Eliza cleans up the dinner table, their son Wesley pretends to do taxes, and their daughter Emily runs around naked in the background in their family’s four generation ranch home in Bison, SD, on April 10, 2018. Max runs a cattle ranching operation on his family’s land and works two other jobs to make ends meet, while his wife Eliza performs as a musician, and writes and records newspaper and radio columns for local publications and South Dakota Public Broadcasting.