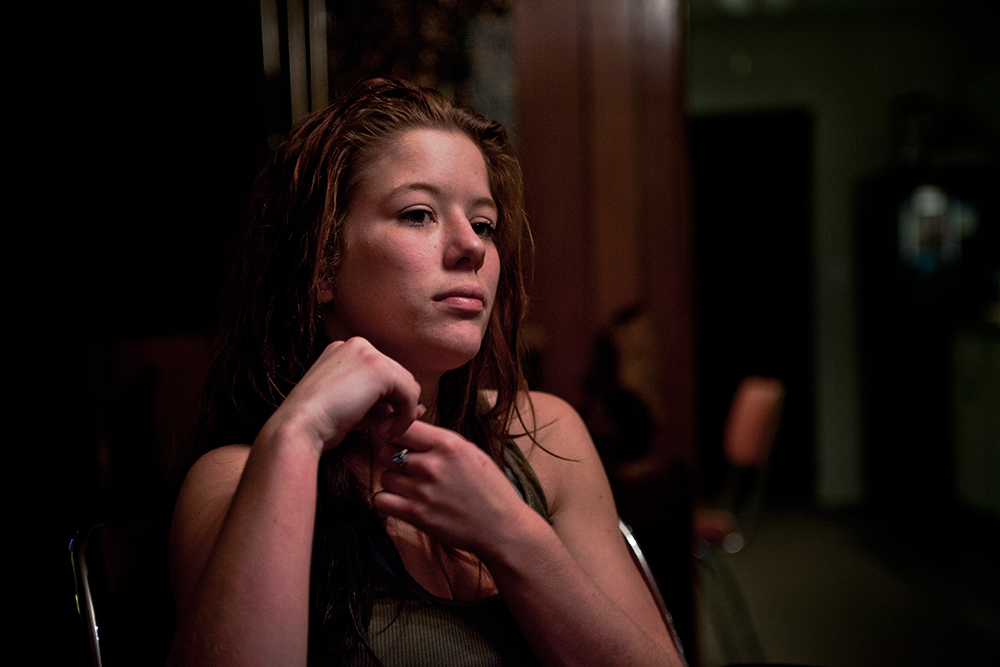 ©Tim Matsui, 17 year old “Natalie,” a survivor of domestic minor sex trafficking, now lives with her parents, Nacole and Tom, in the southwest where they relocated after surviving the ordeal. Natalie was sold

One of the remarkable aspects of Tim Matsui’s “Leaving the Life” is the work he’s done to make sure that the project is more than an affecting, well-told story. For Matsui, creating an award-winning documentary film was just the beginning. He ran a successful Kickstarter campaign to raise money to produce DVDs that he could use in his grassroots outreach. And he has helped aid and educate policymakers and others who are working to end sex trafficking of minors. Matsui pushes us to expand our thinking about the role visual storytellers can play in contemporary society. A longtime partner of Blue Earth, Matsui is currently fundraising for a follow-up film about the culture and politics creating the demand for sex buying. 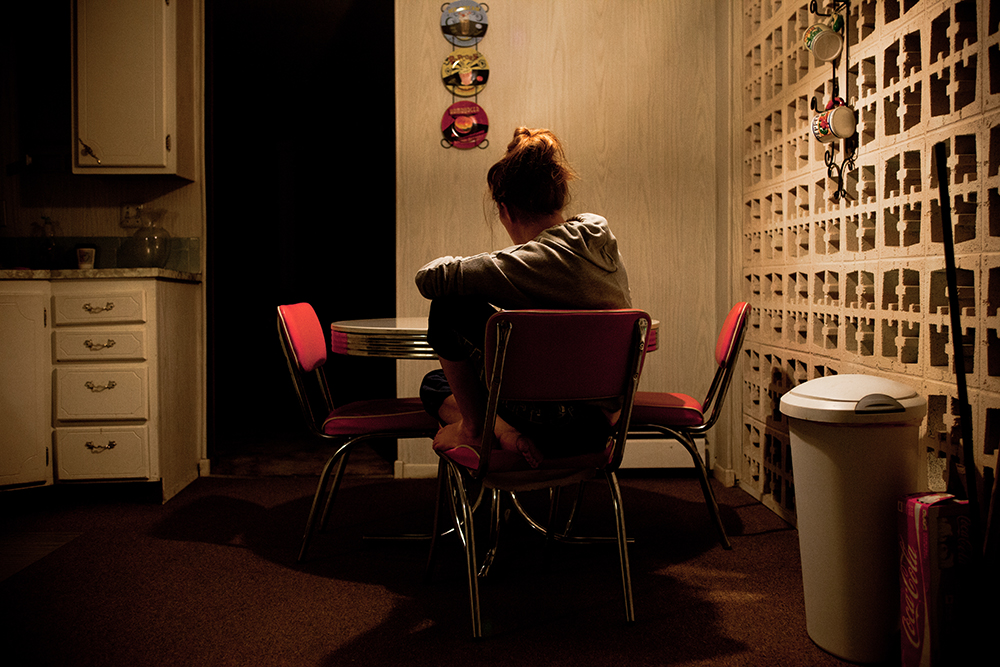 ©Time Matsui, “Natalie” in the home she lives in with her parents.

“Leaving The Life” is a multi-platform initiative to facilitate a collective, action-oriented dialogue around the crisis of commercial sexual exploitation and domestic trafficking of children in the U.S. After working fifteen years on issues related to trauma and victimization, first with sexual violence and now with various forms of human trafficking, both in the U.S. and abroad, photojournalist and filmmaker Tim Matsui has embarked on an innovative long-term effort. 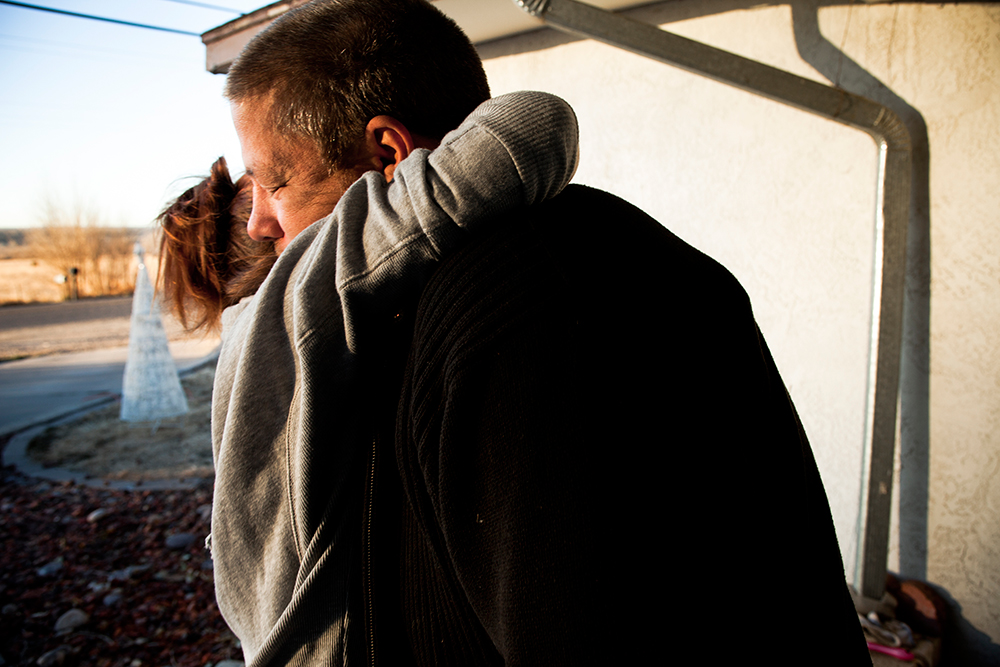 ©Tim Matsui, On her way to work, “Natalie” hugs her father, Tom.

The project has three integrated components:

1.The first film (The Long Night), supported in part by the Alexia Foundation and produced by MediaStorm, follows a father as he searches for his daughter; a teenager’s struggle to break free of her drug addiction and street prostitution; a young girl rebuilding herself; and police officers trying to help those trafficked to break free. A second film is in the works.

2.An outreach campaign to engage key audiences with participatory practices supported, in part, by The Fledgling Fund.

3. An online platform of engagement.

The photographs featured here are stills Matsui created during the filming of The Long Night. To watch the trailer for the film The Long Night visit: http://www.thelongnightmovie.com/

Read about Matsui’s support for policy change in regional government on Medium: “I’m a Photojournalist and I’ve Been Working with Policy Makers. Should I Feel Dirty?” 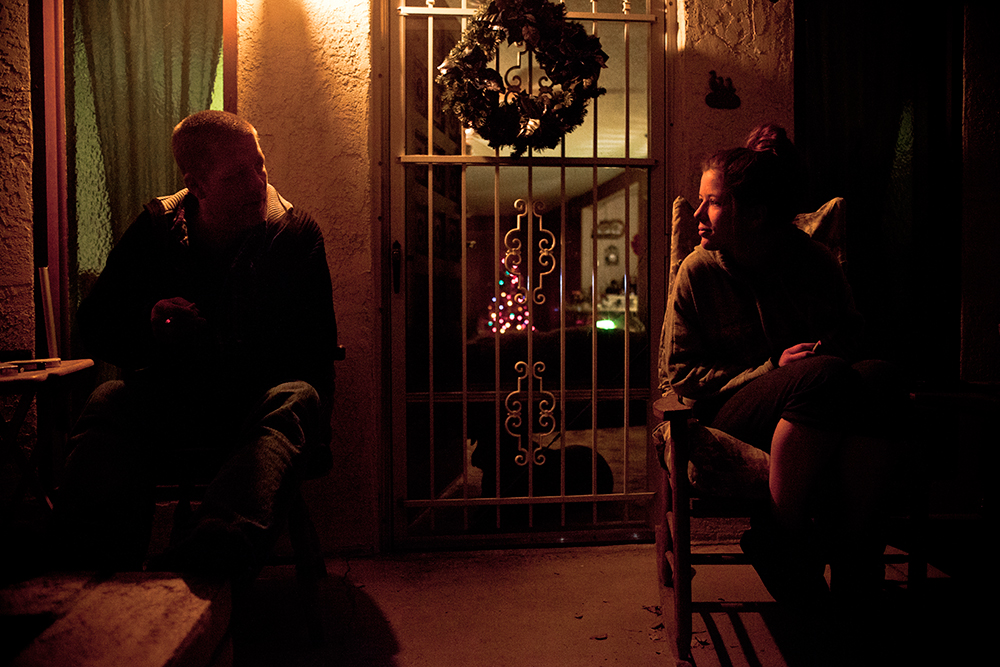 ©Tim Matsui, Father and daughter sit outside the family’s new home in the southwest.

Over his 20-year journalism career, Tim Matsui has focused on trauma and victimization, developing an ability for relational, intimate documentary work. His photojournalistic style, after years spent covering news, results in observational and visceral cinematography.

A non-profit founder, he combined documentary films with sexual violence advocacy work. After covering international human trafficking, he focused on domestic minor sex trafficking to produce The Long Night, a feature-length documentary. He reported, directed, and shot the film, and then, using his non-profit experience, created a grassroots impact campaign.

Through community and government partnership, Matsui co-created and co-hosted a convening with the King County (WA) Executive, Sheriff, and Prosecutor to develop regional policies on sex trafficking. His work is still in use nationally.

In 2015, Tim swept the photojournalism industry awards for The Long Night with first place prizes at World Press Photo, Pictures of the Year International, and Best of Photojournalism.

He was also recognized by the Overseas Press Club, and has won grants from the Open Society Foundations, Fledgling Fund, Alexia Foundation, and the Fund for Investigative Journalism. He has produced fundraising, communications, and impact campaigns with the Casey Family Programs, Drug Policy Alliance, Shultz Family Foundation, Starbucks, and YouthCare. He was nominated for two National News & Documentary Emmy Awards and was a finalist for both the Stanford-Knight Journalism Fellowship and the Guggenheim Fellowship. 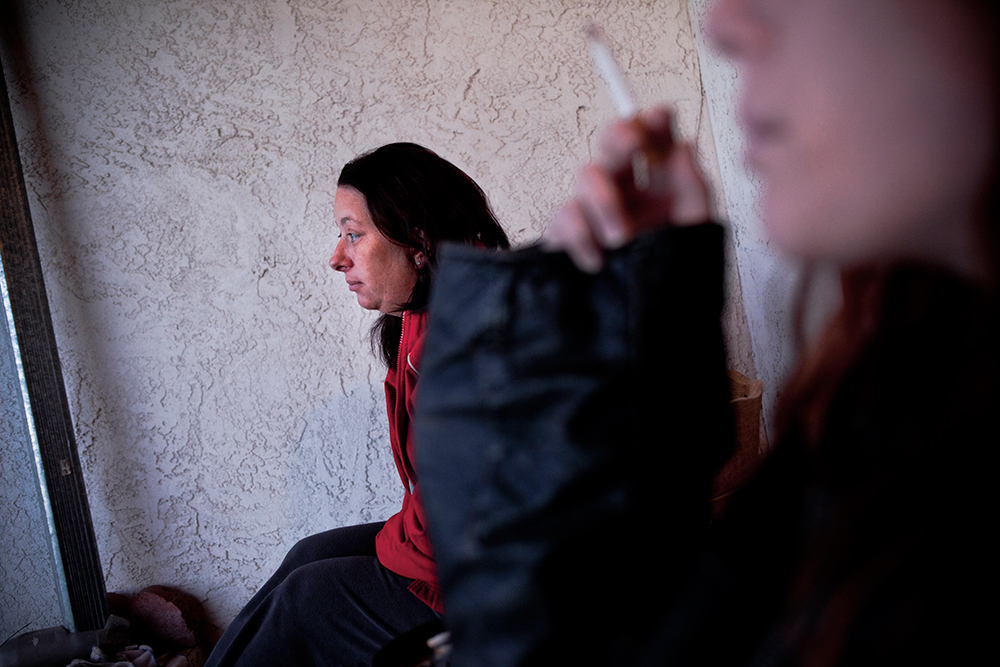 ©Tim Matsui, “Natalie’s” mother Nacole sits with her daughter at their new home in the southwest. 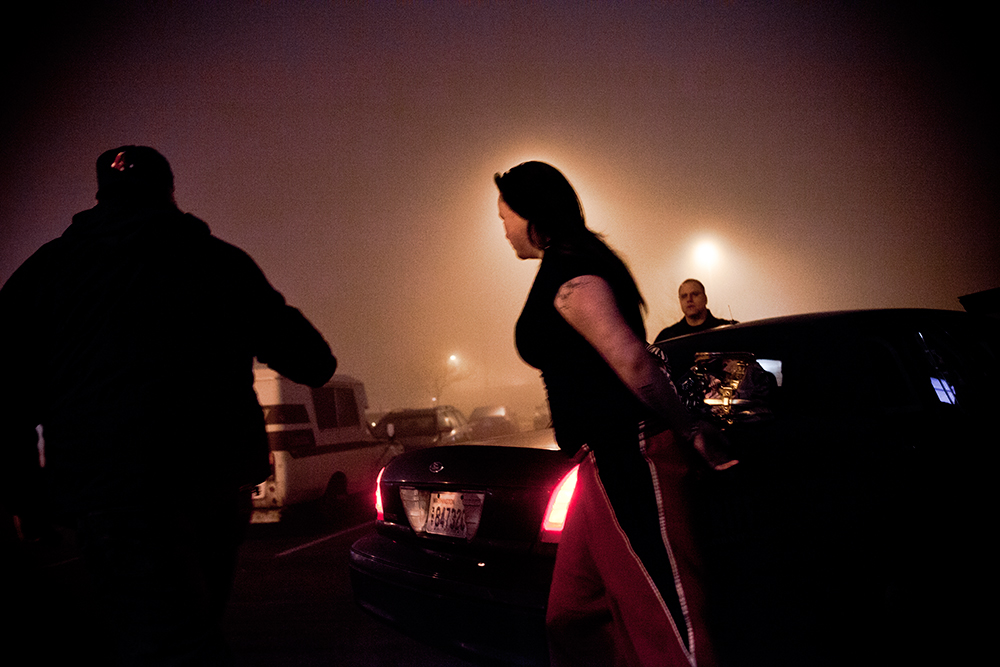 ©Tim Matsui, A young woman, a minor known for robbing her ‘dates,’ is arrested for prostitution. 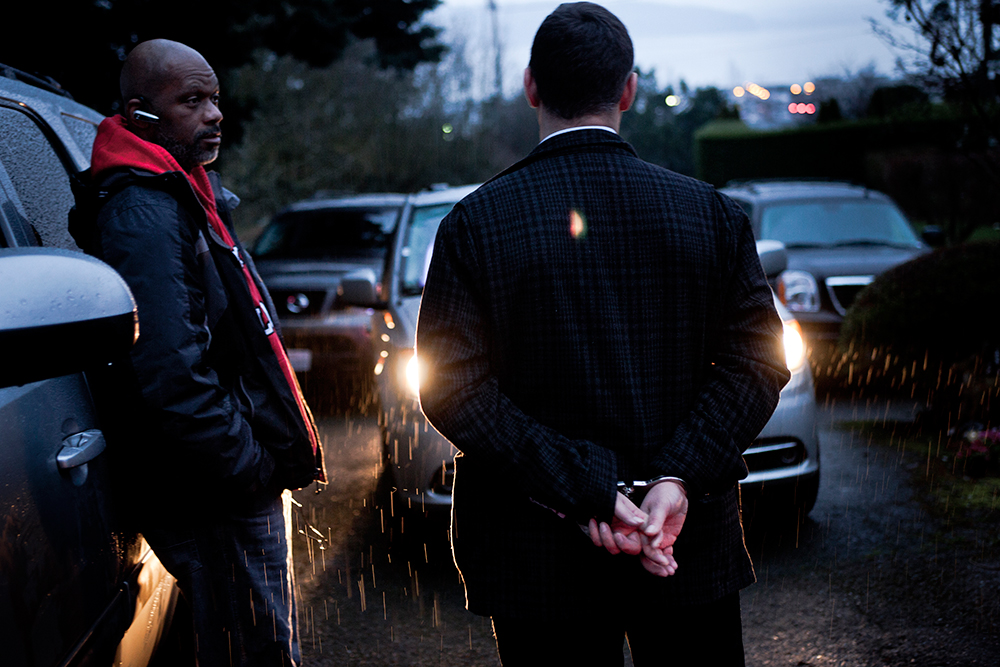 ©Tim Matsui, King County Sheriff’s Detective Brian Taylor questions a ‘john,’ a buyer of commercial sex. He was cited for a misdemeanor and released, as was the adult prostitute 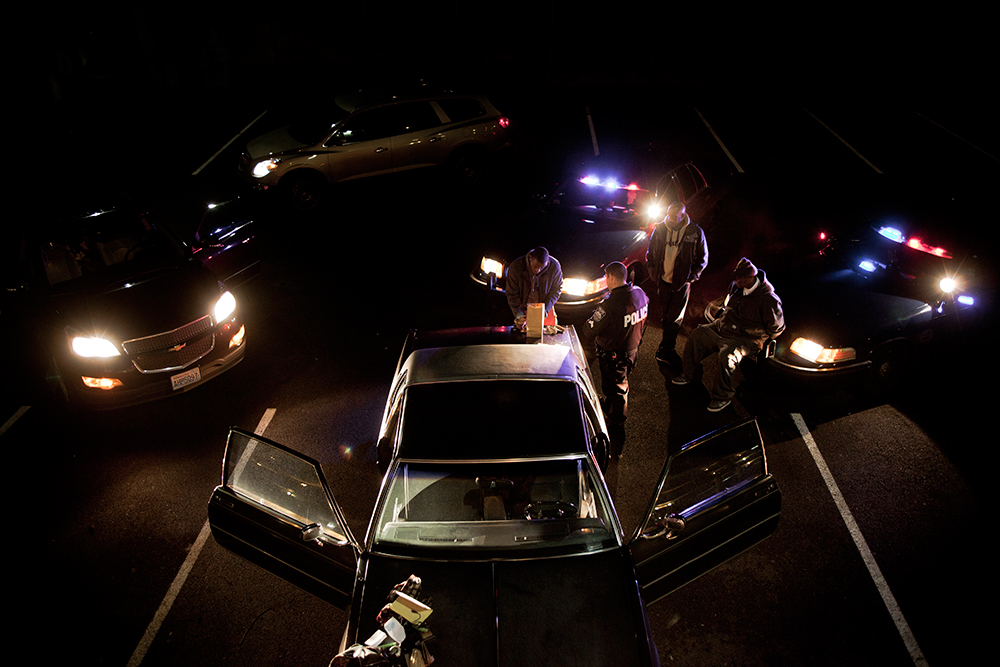 ©Tim Matsui, (Suspect’s face obscured for privacy.) A ‘john’ is arrested for possession of 41 grams of crack cocaine and a firearm. Having already served 14 years for prior convictions, detectives say he is looking at another five years. He was stopped for picking up a known prostitute. 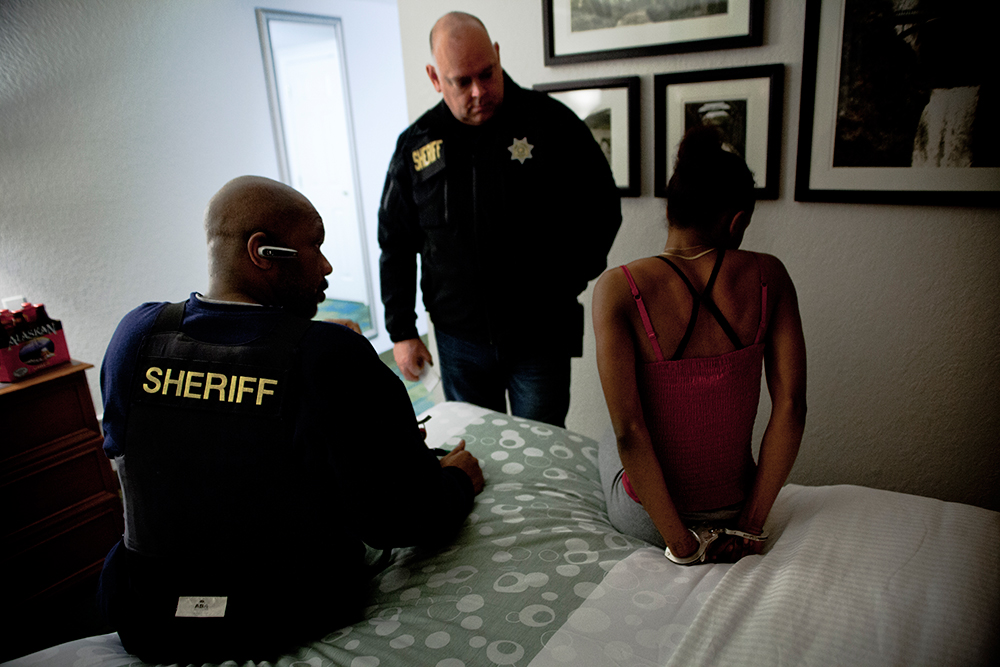 ©Tim Matsui, Lisa, just before an attempt to detox in a center, prepares one last syringe of heroin. Though this detox attempt lasted only an hour, it was one of many increasingly longer efforts to kick her habit and try to leave the life of prostitution. 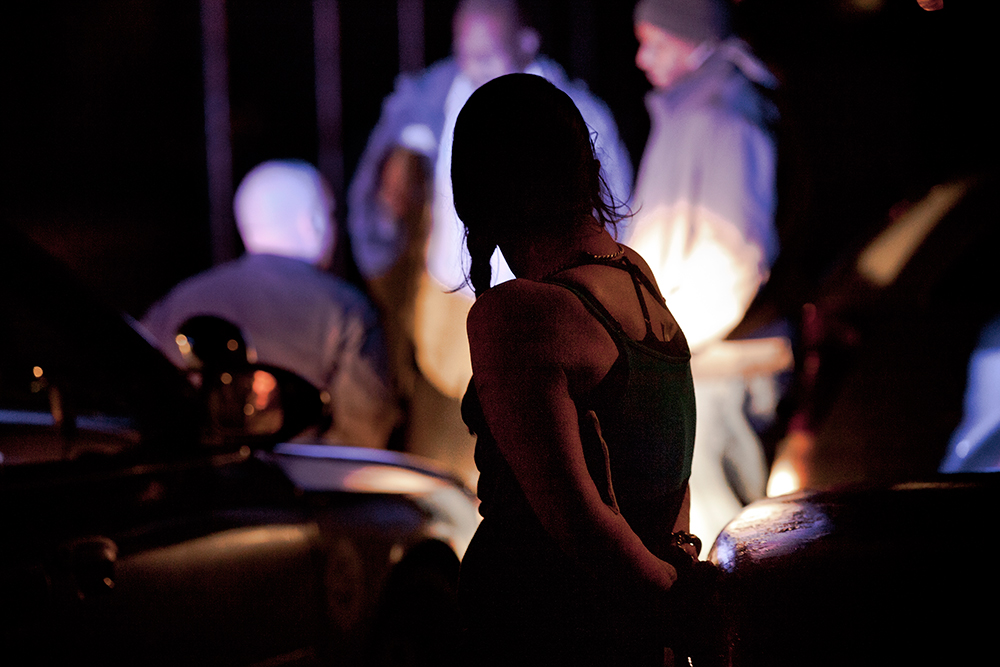 ©TIm Matusui, Handcuffed, 19-year-old Lisa, who was just pulled from the car where she was providing sex for money, waits to be questioned by SeaTac police. 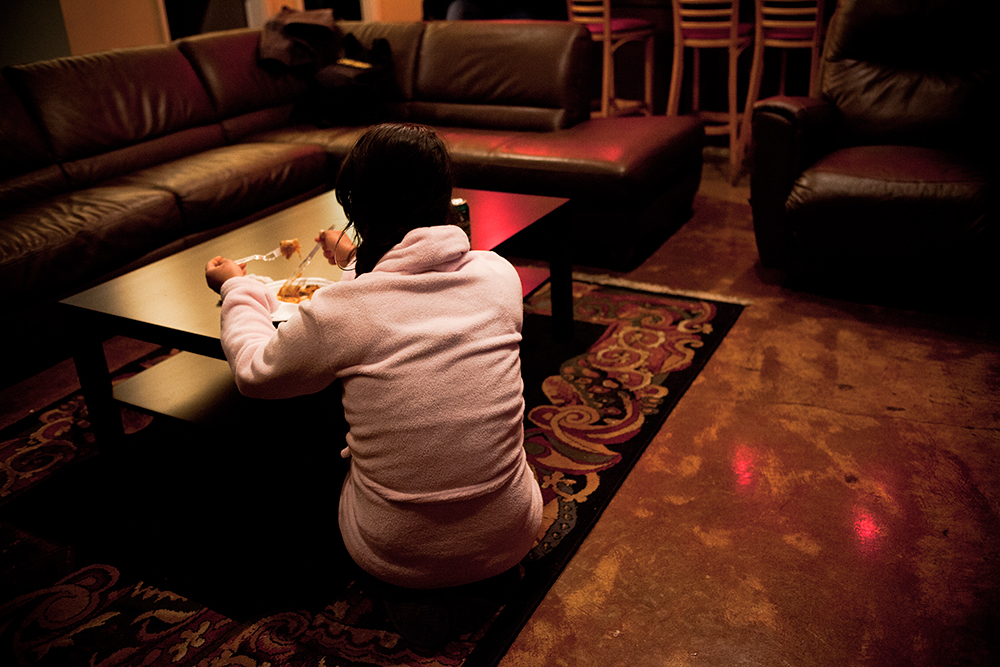 ©Tim Matsui, Lisa, wearing her first robe ever, eats at the Genesis Project drop-in center the night the detectives followed her and arrested her date for solicitation of prostitution. Kidnapped and sold by a pimp at 13, Lisa has sold herself for the past six years in order to maintain a heroin addiction she picked up along the way. 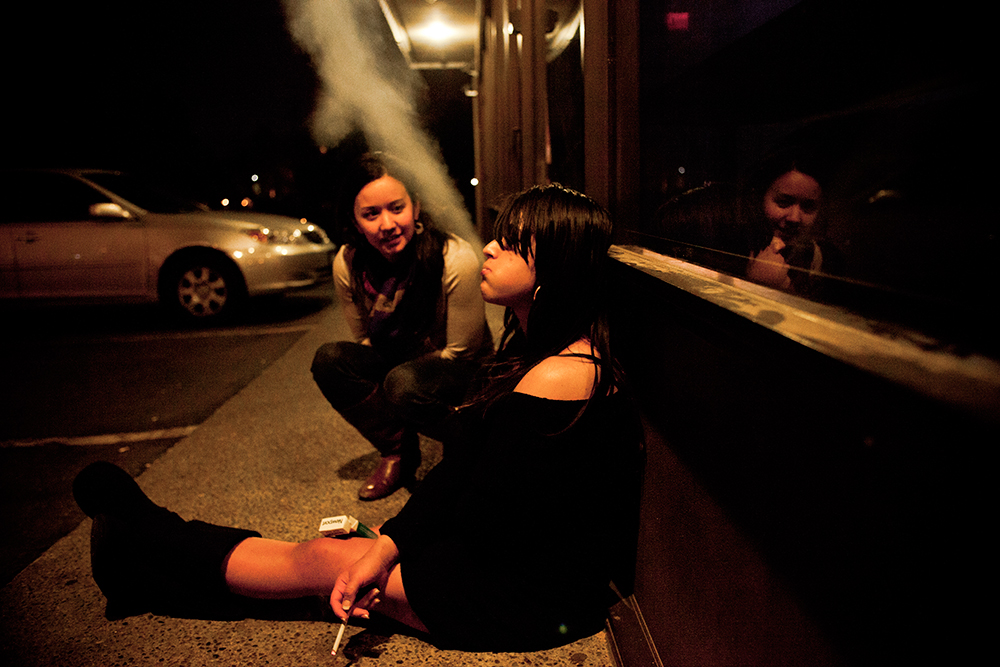 ©Tim Matsui, Denise Sams, Center Director at the Genesis Project, speaks with Lisa on one of the nights she chose to stay and try to detox on her own. 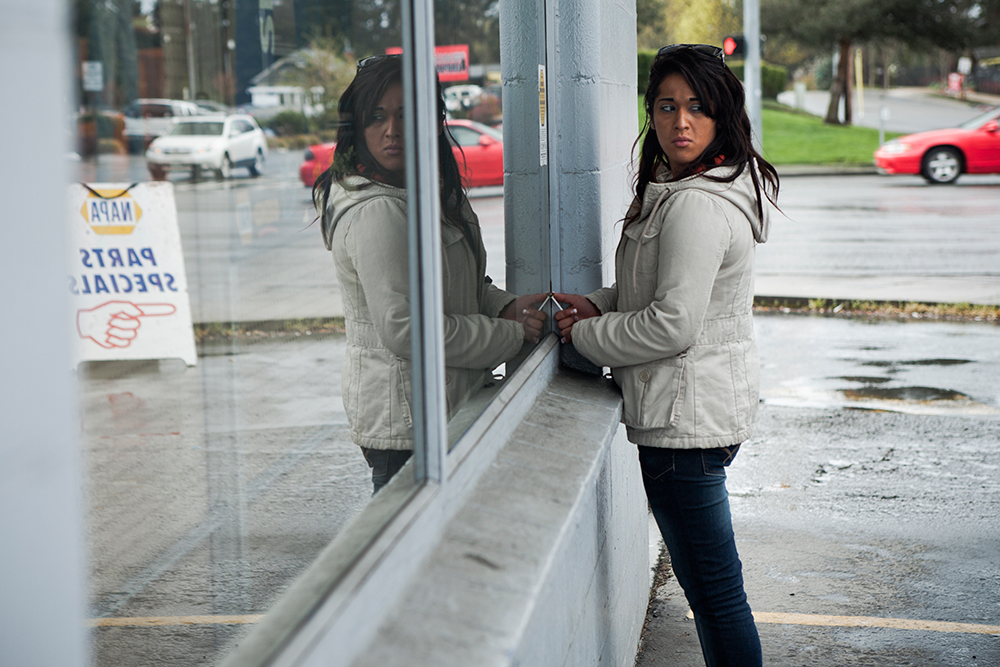 ©TIm Matsui, Lisa, just before an attempt to detox in a center, prepares one last syringe of heroin. Though this detox attempt lasted only an hour, it was one of many increasingly longer efforts to kick her habit and try to leave the life of prostitution. 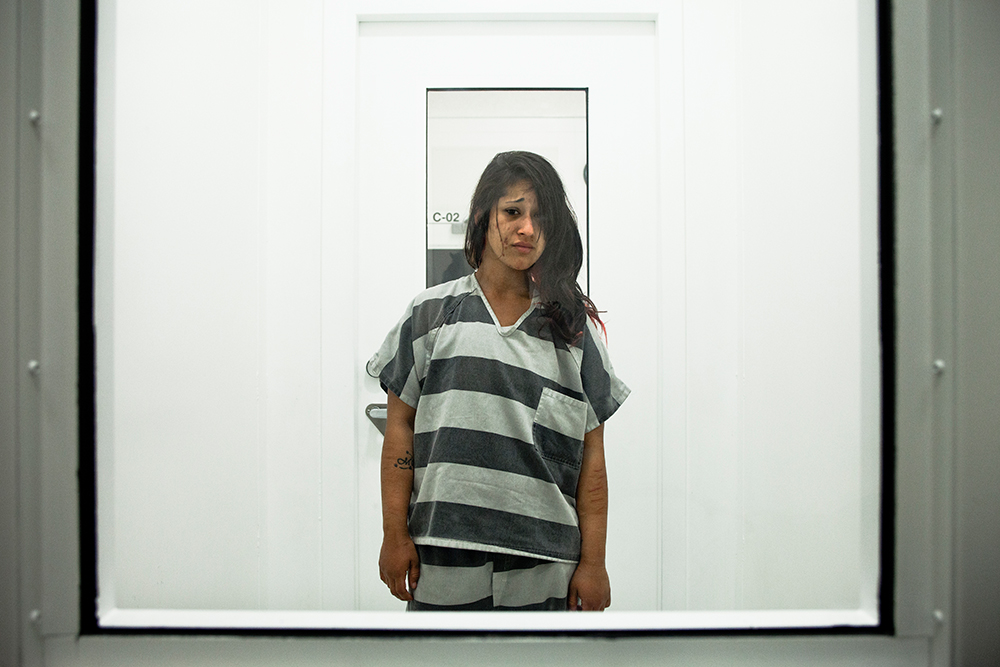 ©Tim Matsui, : Lisa in jail after violating her Stay Out of Area of Prostitution order. Having no other source of income but prostitution, and the burden of her past trauma from being trafficked and her heroin addiction, Lisa is struggling to leave the life. Genesis Project, the court system, her probation officer, and the local police do their best to provide her with opportunities, but try as she might, she keeps cycling back to the drugs and the prostitution to pay for them.