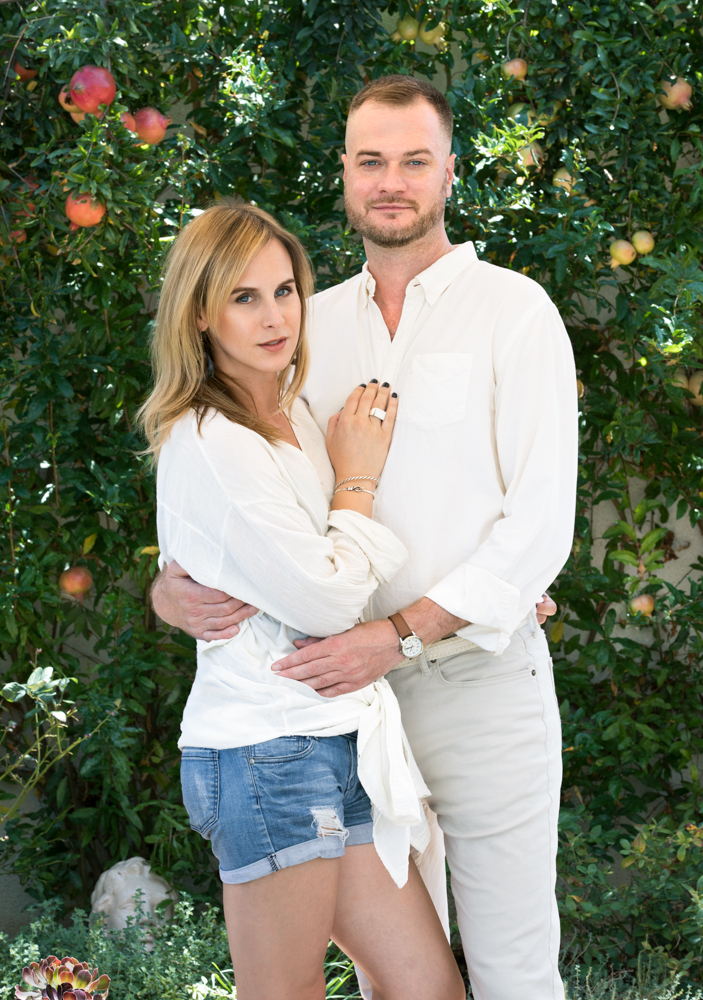 Prior to the FotoFest Reviews, the Society of Photographic Education had a conference in Houston with four days of networking, lectures, seminars, and portfolio reviews. One of the guest speakers was Zackary Drucker, an American trans woman multimedia artist, LGBT activist, actress, and television producer. She was introduced by Jess Dugan and B.Proud. The next day I had the pleasure of reviewing B.Proud’s project, Transcending Love: Portraits of Transgender and Gender Non-conforming Couples that includes a portrait of Zackary Drucker (see above). The series is a beautiful compilation of ordinary people who are often marginalized and overlooked because of their sexual orientation and the photographer gives her subjects the greatest gift by profoundly seeing her subjects.  Only by taking the time to acknowledge each other do we begin to have empathy and understanding of each other. To make tax-deductible donations to this project, go here.

B. Proud. It’s not a slogan. It’s the name that’s on her birth certificate and Barbara Proud says that it’s a name she has to live up to.

As both a commercial and fine art photographer, B. Proud has exhibited her work in solo and group shows around the globe. In addition to having photographed President Barack Obama and Lady Gaga on the same day, Barbara maintains an impressive list of clients. She is an Adjunct Professor in the Photography Department, at the University of the Arts, where she received the President’s Award for Distinguished Teaching in 2012.

B. Proud’s current work is a series of socially conscious documentary projects focused on the LGBTQ+ and transgender communities. “First Comes Love” is a traveling exhibition of photographs, stories and video of couples in long-term relationships. When the mainstream publishers refused to take on the project, Barbara forged ahead and self-published the coffee table book “First Comes Love: Portraits of Enduring LGBTQ Relationships,” with a foreword by icon Edie Windsor. A compilation of stunning black & white portraits and stories of 65 couples, the book has received two gold medal awards. “First Comes Love” has been exhibited in New York City, Philadelphia, Delaware, Washington state, Washington, DC, Seattle, Minneapolis, Florida, Berlin, Germany and Athens, Greece. Her short film, “A Circle of Diamonds,” produced with Philly locals Michael Biello and Dan Martin about Edie Windsor’s diamond engagement pin, has been included in 16 film festivals worldwide.

The sequel project, “Transcending Love” is a current work in progress and is focused on transgender and gender non-conforming couples across the country in an attempt to open hearts and minds to a community deserving of understanding, respect, and basic human rights. She is currently working towards representing the greatest amount of ethnic, geographic, socio-economic and age diversity in this project in order to show a country that is increasingly becoming divided, that transgender and gender non-conforming couples are everyone’s neighbor.

Proud’s projects have received grants from the B.W. Bastian Foundation, the Puffin Foundation, The University of the Arts, and the Delaware State Arts Council. Her work is included in the Weeks Gallery, Jamestown, NY, the Delaware Art Museum, Eastman Kodak, Haverford College, the Philadelphia Museum of Art, and private collections.

B. Proud lives in Wilmington, DE with her wife, Allison, and two dogs, Soleil and Cosette.

B. Proud’s commercial work can be seen at www.bproudphoto.com and documentary project at www.firstcomeslove.org. 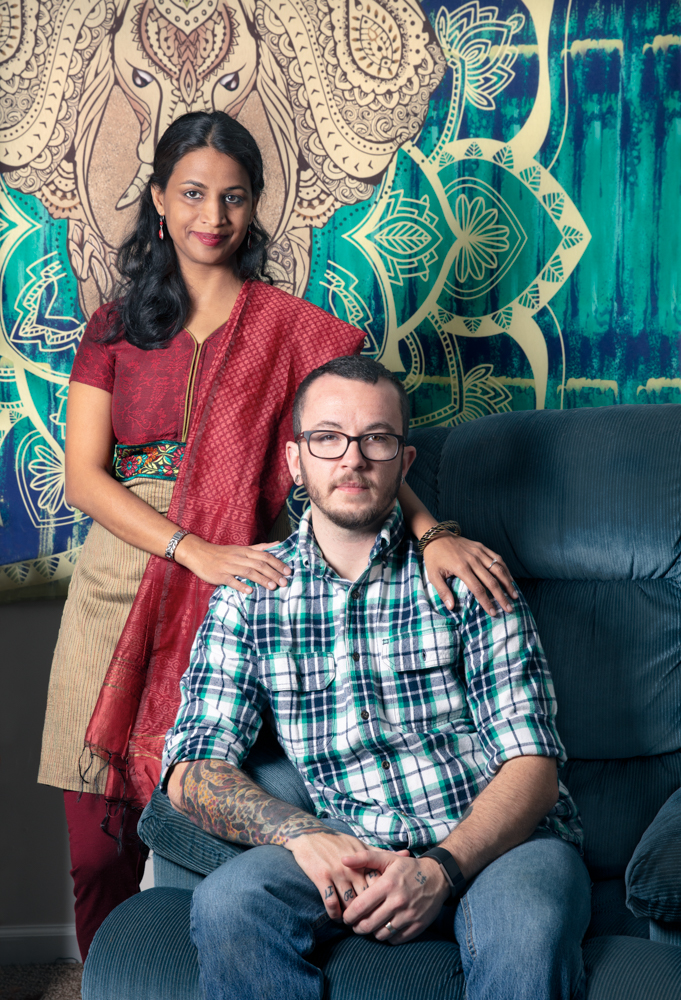 As a lesbian photographer with a name like Barbara Proud, or B. Proud, there was no question that I would one day travel down the “art as activism” path. B. Proud is my mantra and a name that I have to honor. Indeed, my work during the past decade has been dedicated to social change through the creation of the First Comes Love Projects. This project, Transcending Love: Portraits of Transgender and Gender Non-conforming Couples, invites the viewer to accept the subjects as everyday people with hopes and dreams and a deep abiding love. The portraits offer an invitation to accept what’s beneath the surface, not in terms of anatomy, sexuality, or gender expression, but rather what lies in the hearts and souls of the subjects.

With proposed legislation as base and vile as discriminating against bathroom usage along with the current US President’s tweets and directive about removing and banning transgender soldiers from serving their country, it is clear that there is still much work to be done to protect our LGBTQ community, specifically the transgender community. 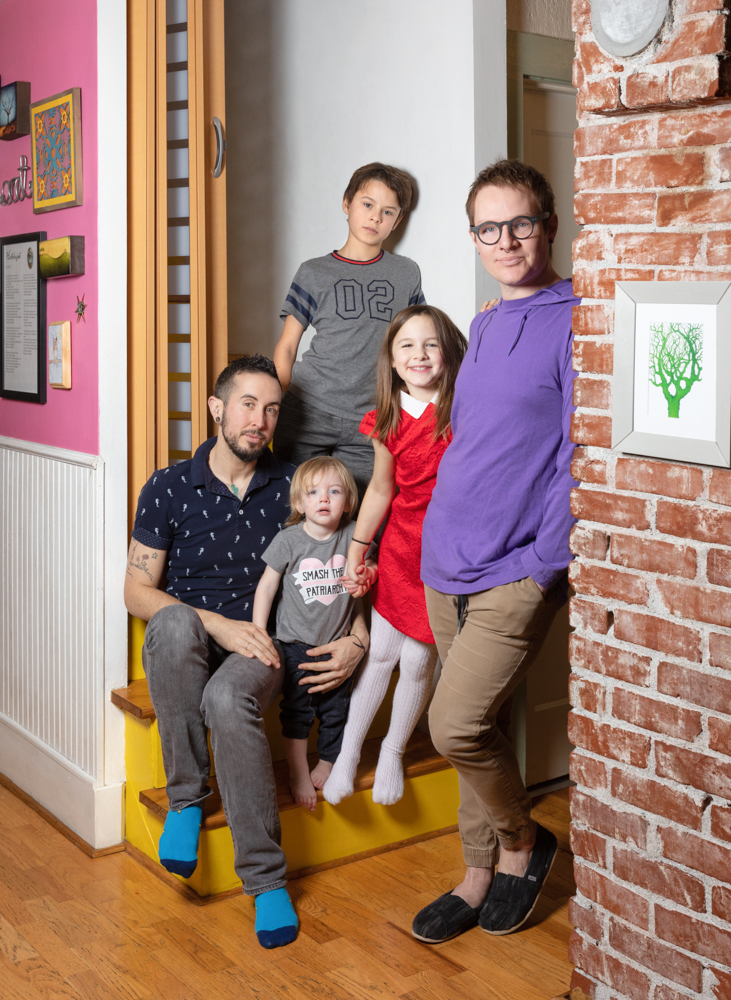 ©B.Proud, Trystan and Biff and family

Transcending Love specifically focuses on celebrating couples and families in a community that has been silenced far too long. This work focuses on portraying couples, and not just individuals, in committed relationships and their love and determination to be together. It is one thing for a person to find their truth and decide to transition; it is another to do that and navigate the complexities of a relationship. Highlighting how deep and committed this love is will confirm that it is the heart and soul of a person that is most important, not the outer shell or their genitalia.

The formality of the portrait, as opposed to a candid photograph, is aimed at honoring the subjects in a more stately, heroic way. In many cases, the couple visibly presents as heterosexual or even homosexual, terms reserved for sexuality. This project is about the validity and fluidity of gender expression. The location for each portrait, chosen by the couple in discussion with the artist, is significant and provides the viewer with another level of understanding into the relationship. 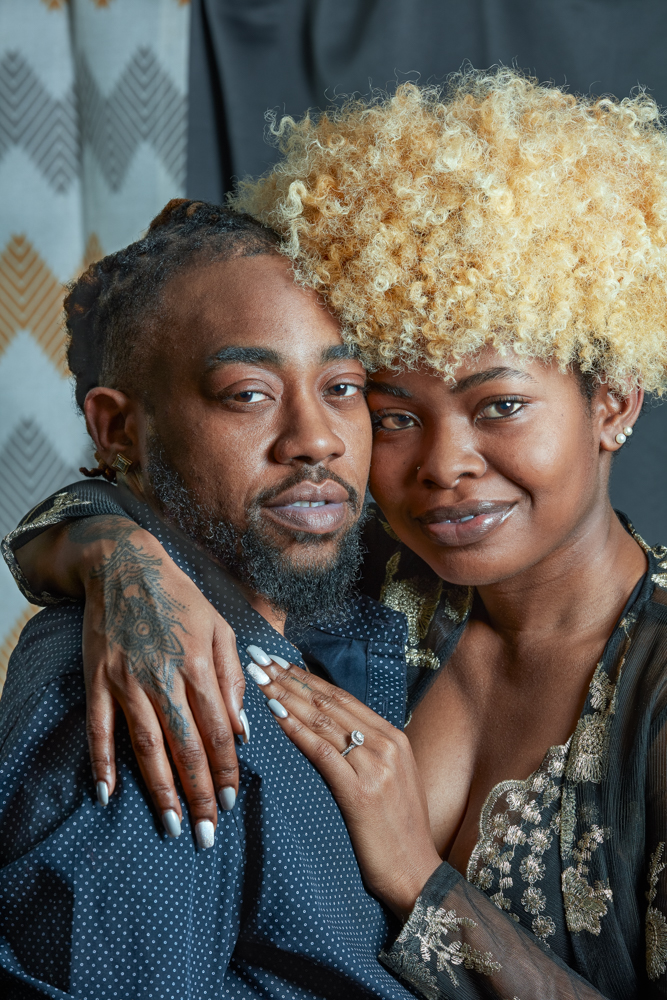 The subjects photographed show an array of relationships and an assortment of combinations, all with the common thread of people being their true selves and falling in love. Whether it’s two transgender men, two transgender women, a formerly heterosexual couple where either one spouse or partner has transitioned, a formerly lesbian couple, where one has transitioned, or a cis gay man and a trans man, all are portrayed with the respect they deserve as human beings. The photographs simultaneously raise questions and provide answers and hopefully, open doors that have been closed shut far too long.

This project, unlike its predecessor, First Comes Love: Portraits of Enduring LGNTQ Relationships, is not presented in black & white because the trans community is anything but. There are many hues and configurations and society needs to embrace the full spectrum of the manifestations of love. Is a lesbian who becomes a trans man and is in a relationship with a cis gendered woman now straight? Does it matter? Why do labels need to define one of the deepest emotions on the planet? Why does love even need to be explained? It just is. 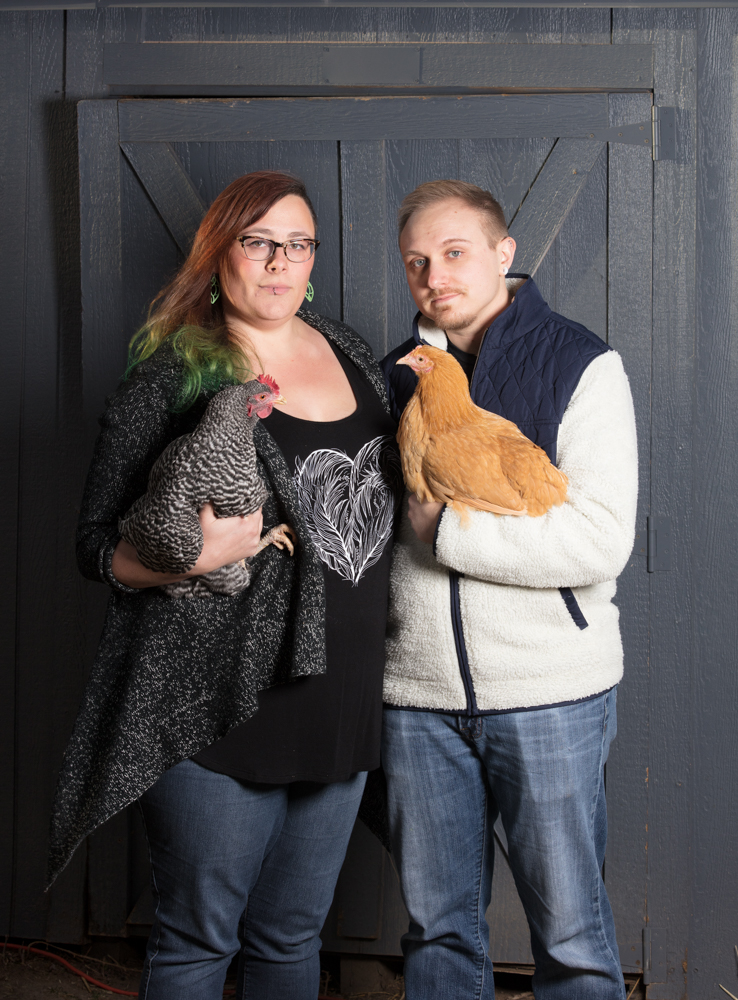 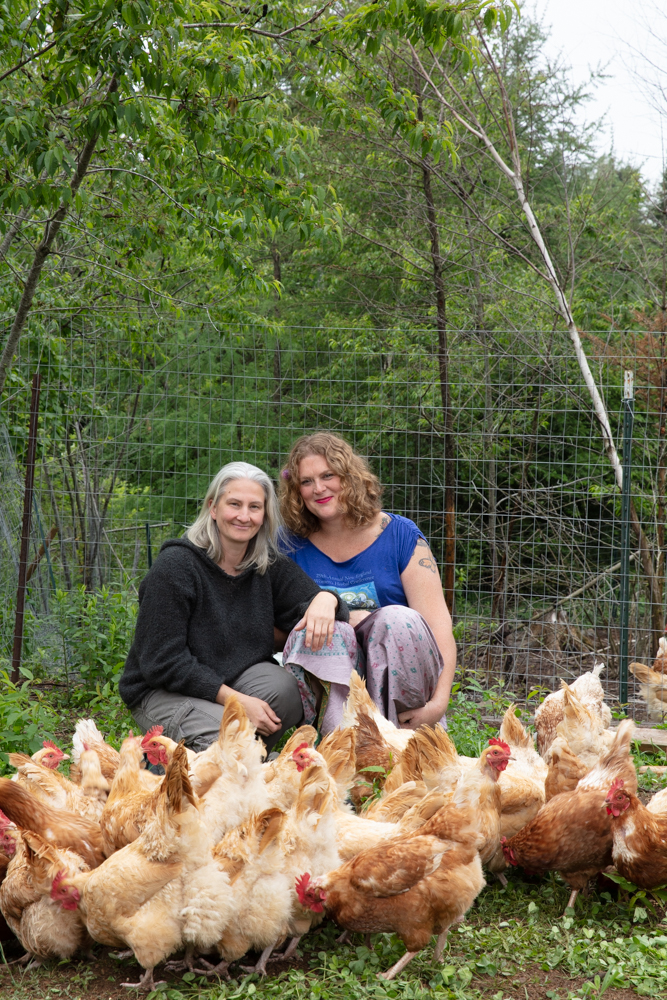 ©B. Proud, Shelley Hart and Holly Pickens in Whiting, Maine 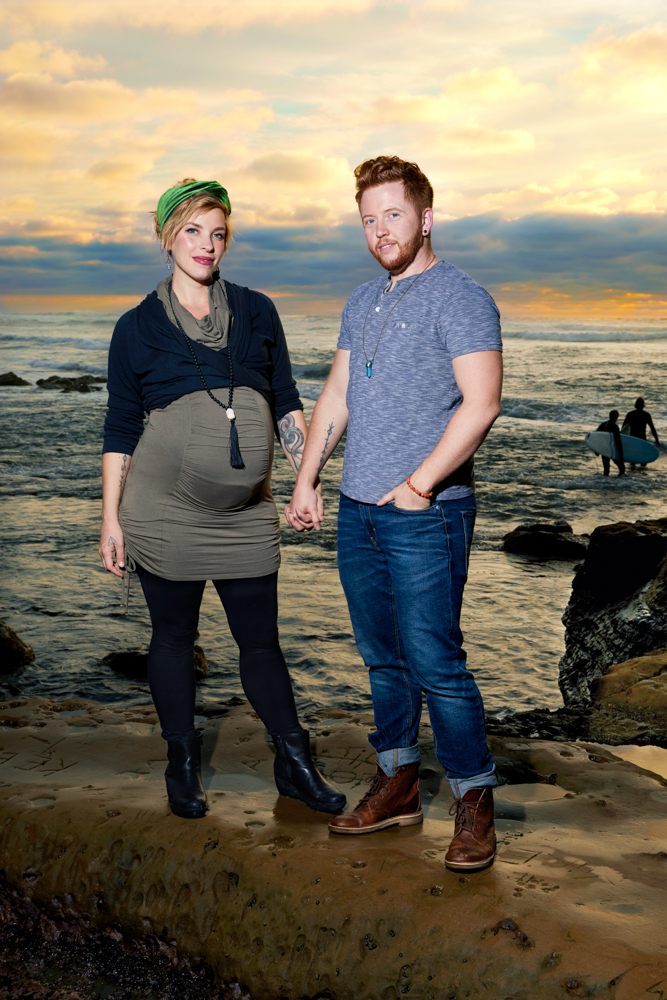 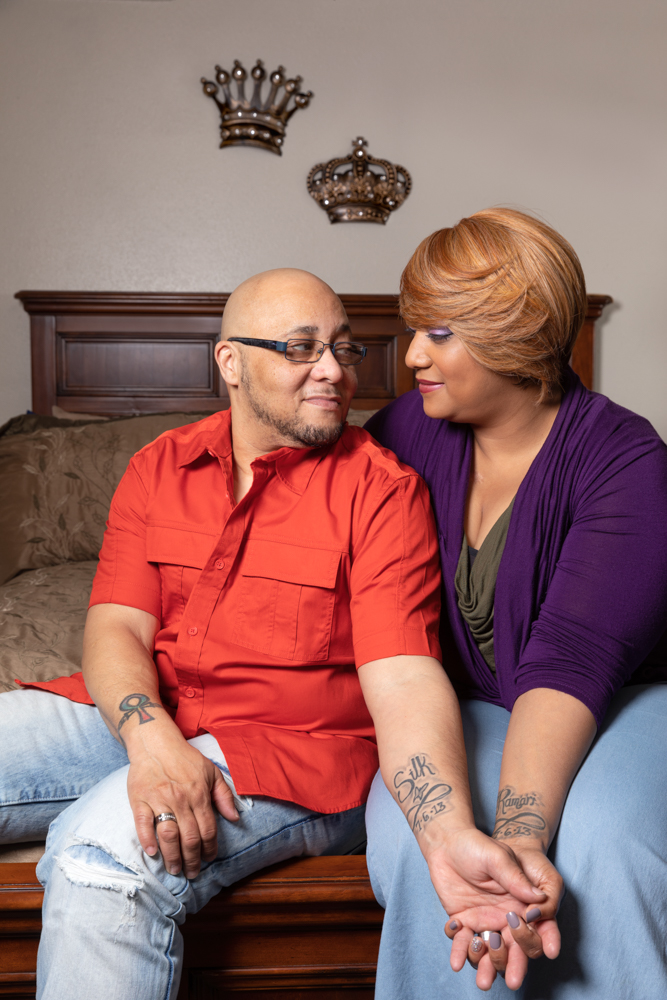 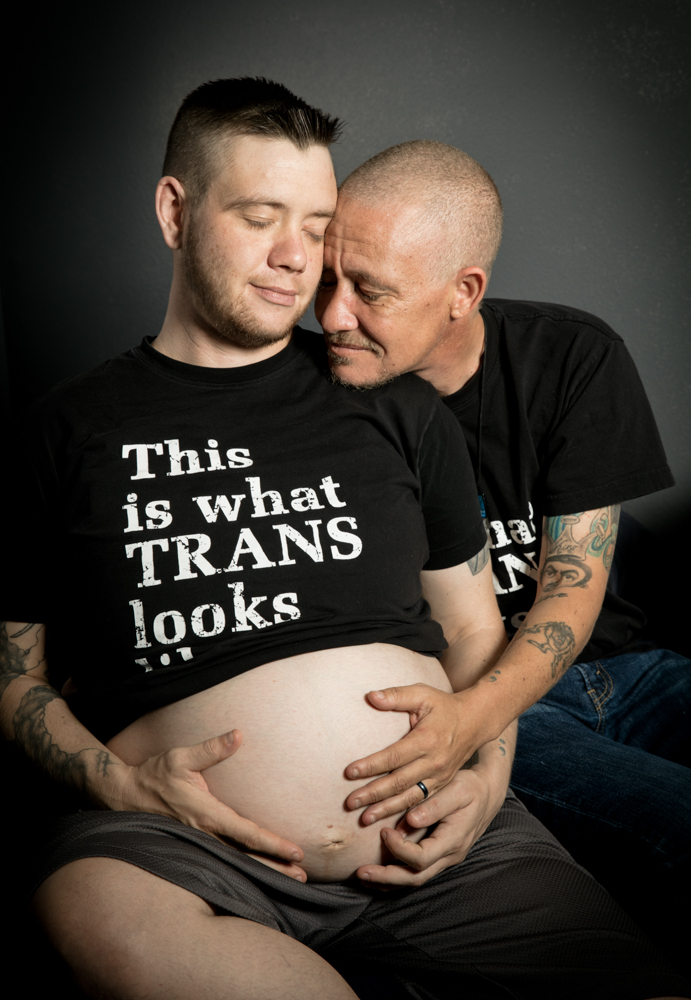 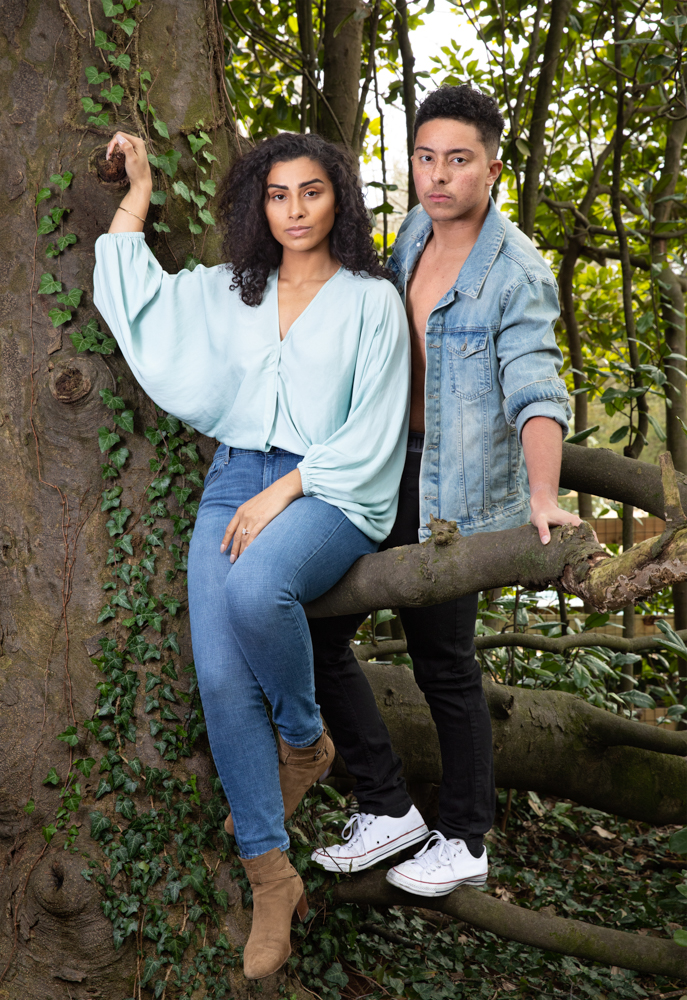 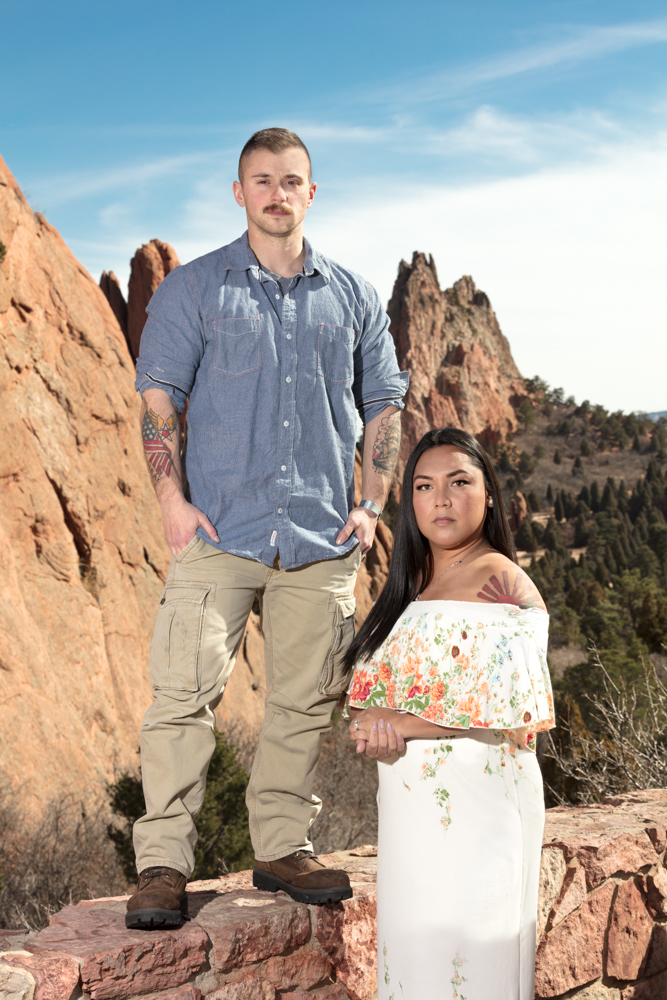 ©B. Proud, Logan and Laila Ireland 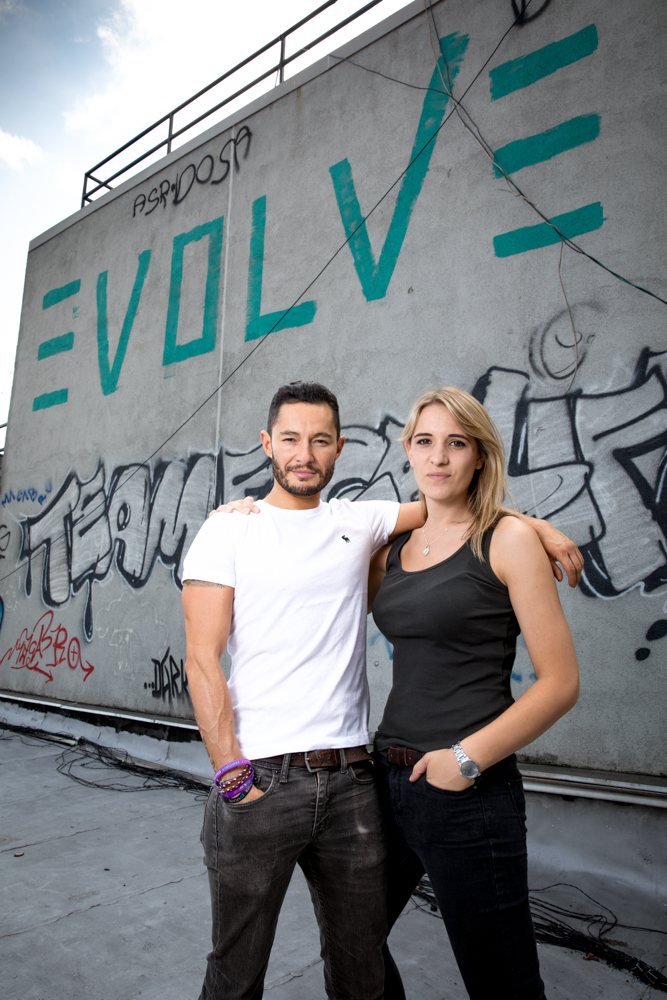 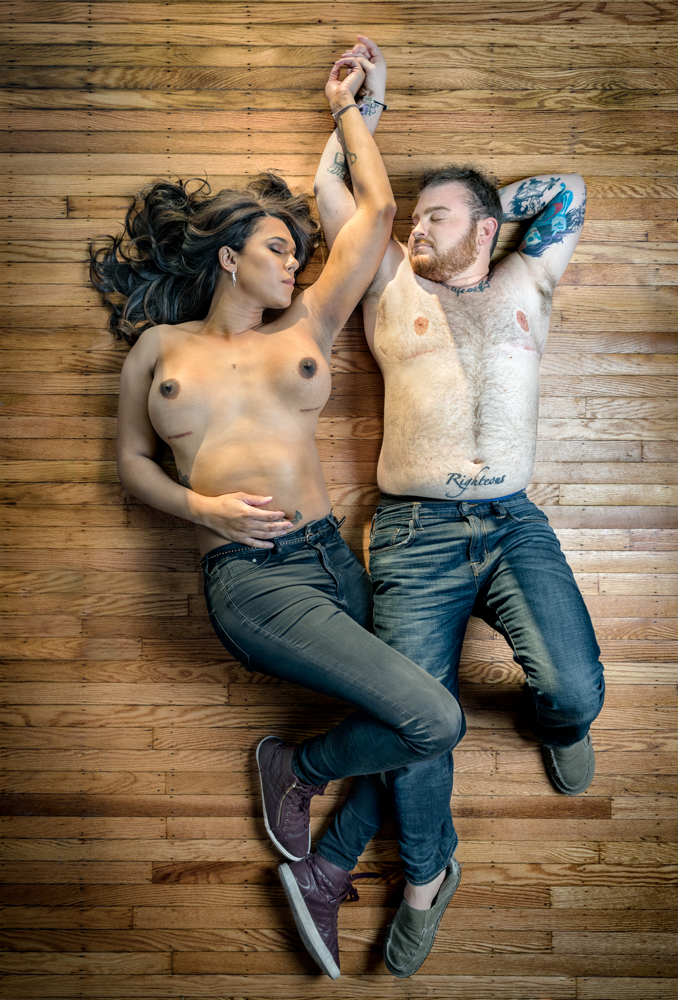 ©B. Proud, Jaden and Gabrielle 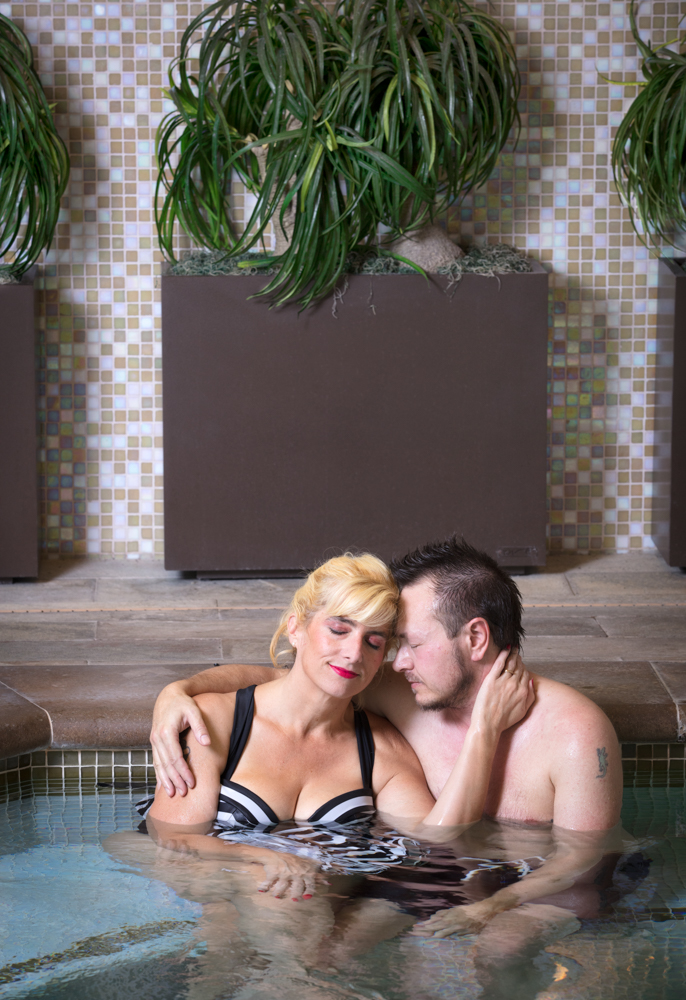 ©B. Proud, Jacob and Diane Anderson-Minshall 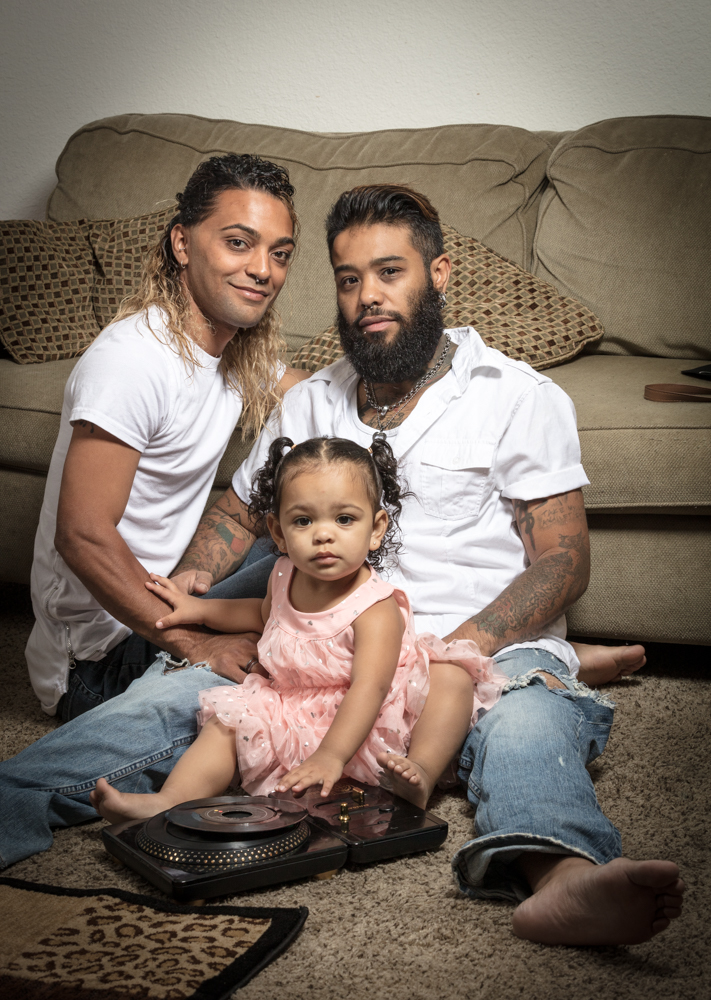 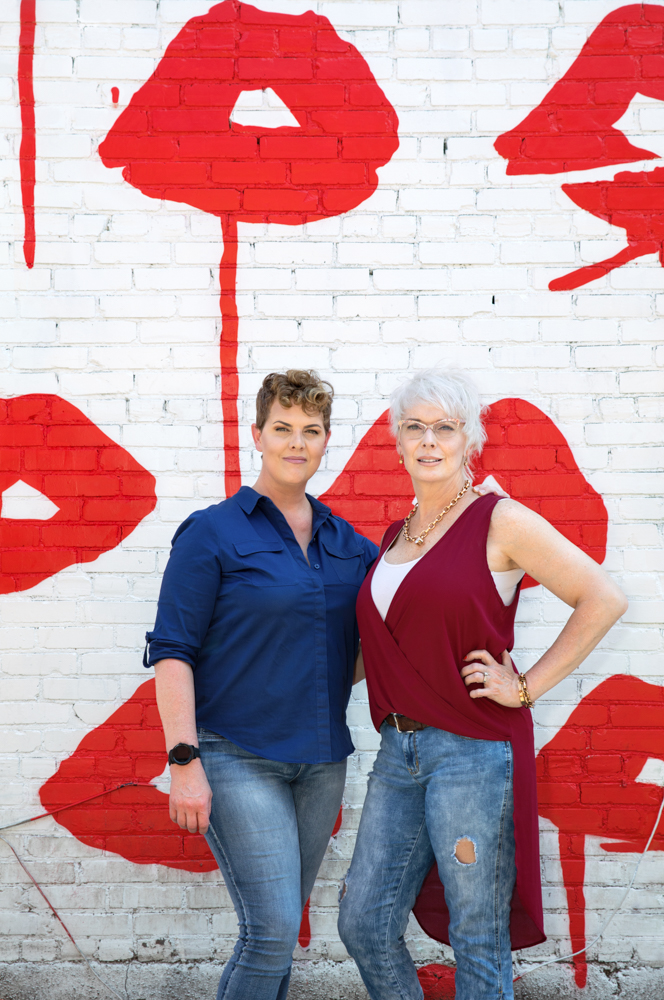 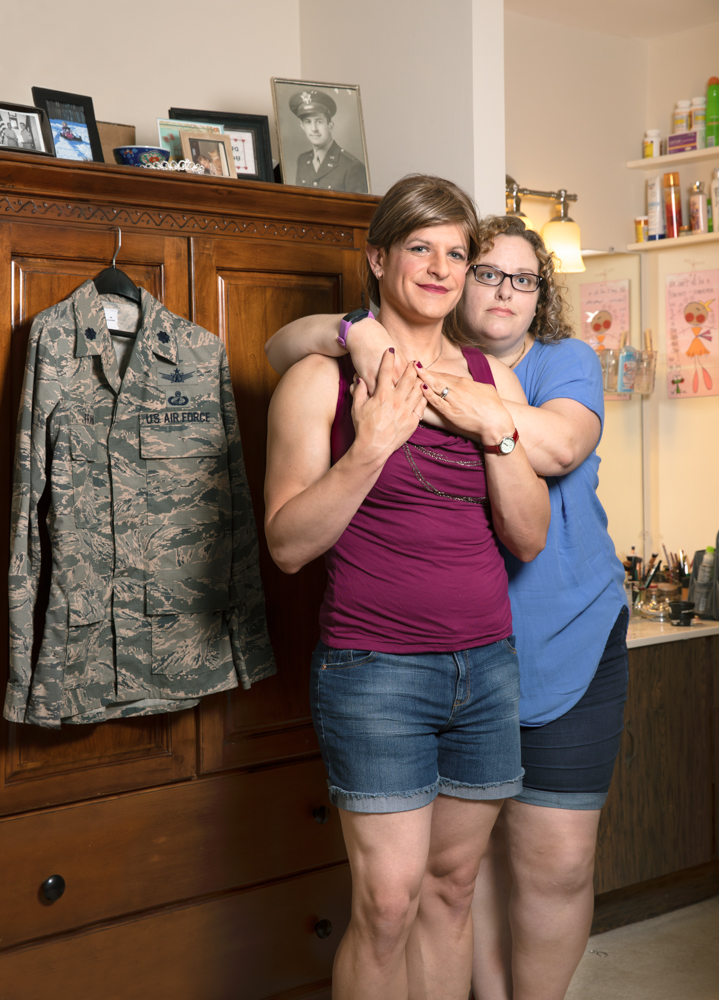 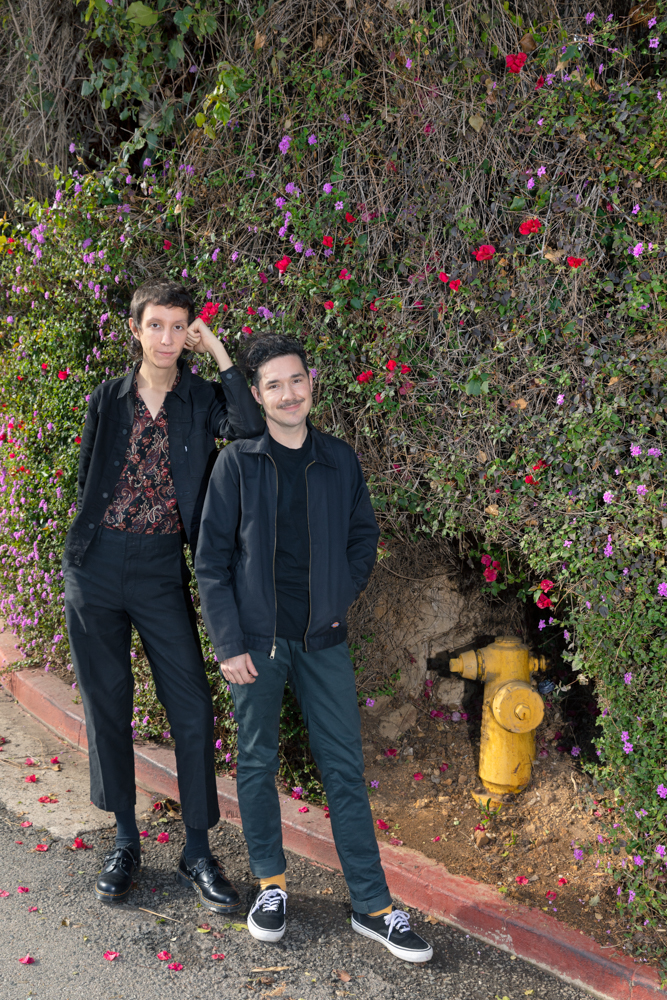 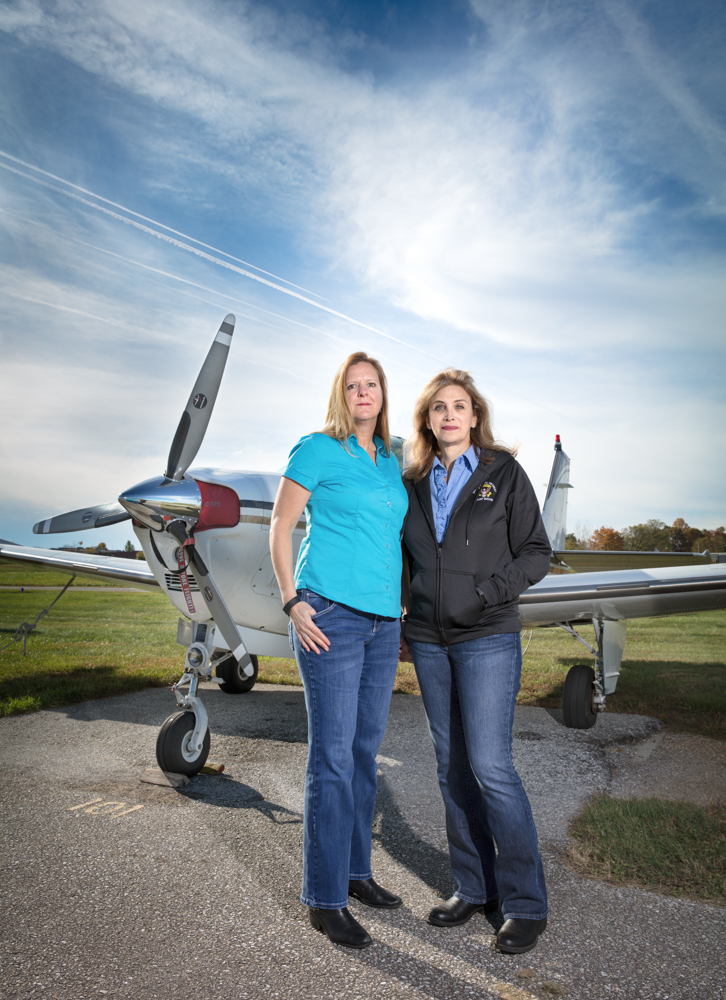 ©B. Proud, Amanda and Jen