Magali Duzant: The Moon and the Stars Can be Yours by Lisa McCartyJune 14, 2020 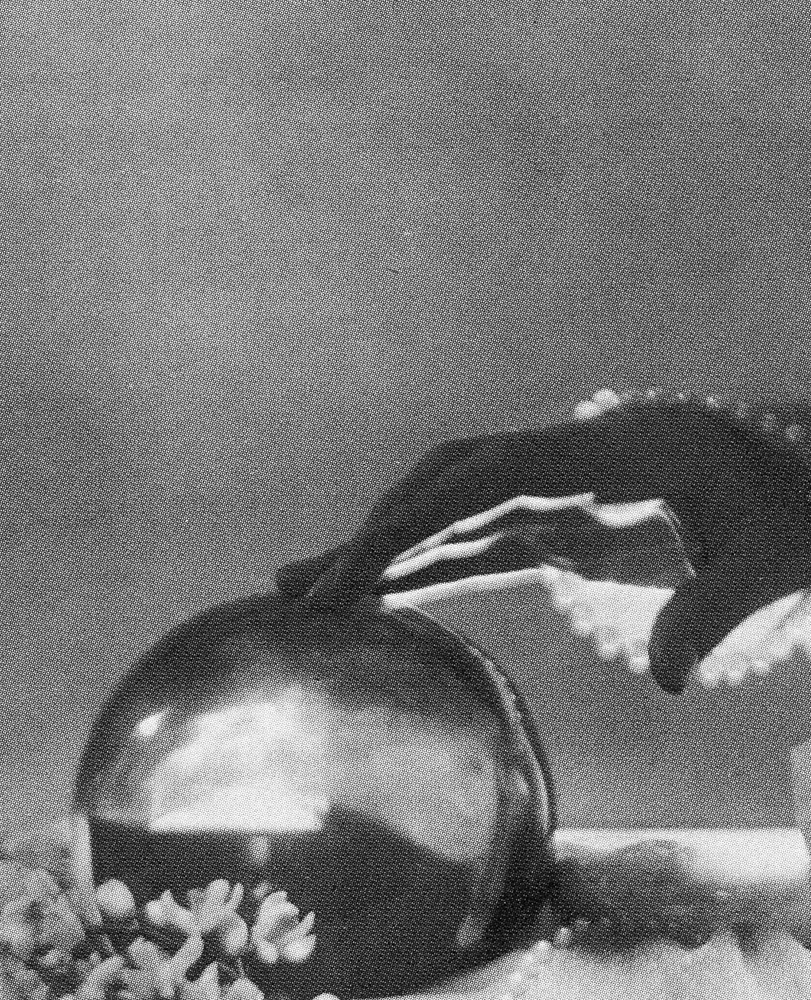 Should I stay in New York City? Will I find happiness? Will I find love that lasts? Is there luck in my future? Should I continue to make art? These are just a few of the central questions posed in Magali Duzant’s book The Moon And Stars Can be Yours : Notes on Subway Psychics.

Many artists ask such questions repeatedly over the course of their lives. Duzant uses them here to structure her, “freewheeling investigation into the rise of contemporary spiritualism in an age of uncertainty.” Notably, this book was released in fall 2019. In just a few months the phrase, “age of uncertainty,” holds new meanings and significance. In this sense The Moon and Stars feels eerily prophetic. Yet this unexpected resonance is certainly appropriate for a book that encompasses a comprehensive historical and practical investigation of psychics. 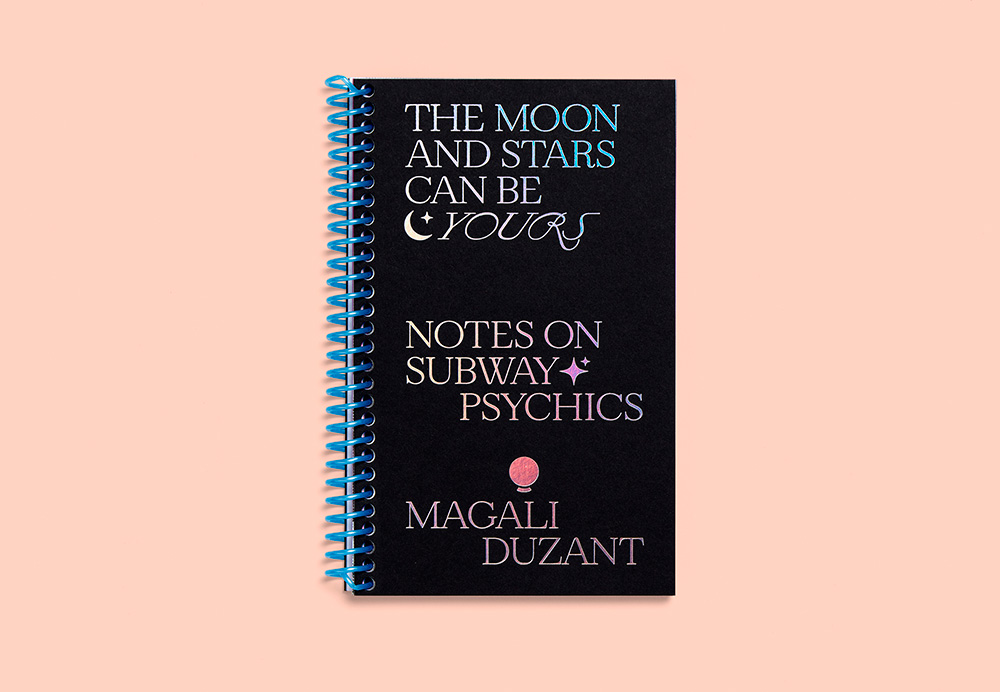 ©Magali Duzant, The Moon And Stars Can Be Yours : Notes on Subway Psychics, front cover 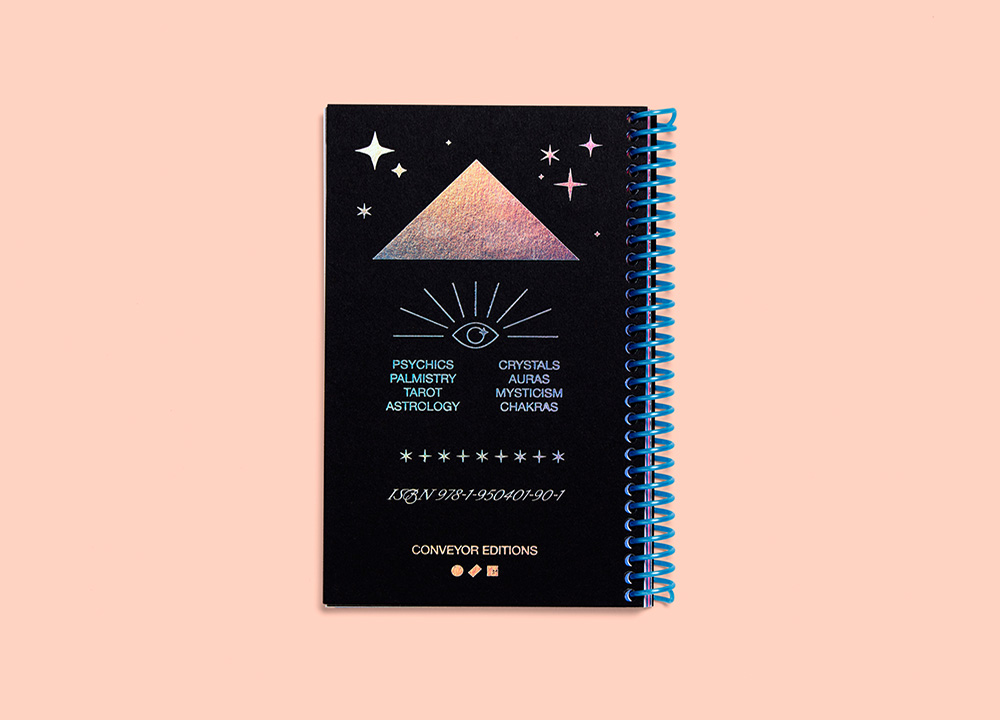 ©Magali Duzant, The Moon And Stars Can Be Yours : Notes on Subway Psychics. The back cover was designed to mimic the ubiquitous Keano flyers plastered throughout the NYC subway.

The title of the book itself is derived from the ubiquitous ads for the spiritual consultant, Keano, in the New York City subway system. The Moon and Stars Can Be Yours; I am simultaneously captivated by and skeptical of such a bold promise in either a book title or commercial. However, in assuming that the title phrase is a promise, as opposed to a possibility, I’ve just telegraphed my willingness to go down the rabbit hole. Luckily Duzant is an expert guide to the largely unmapped, though pervasive, world of psychics in her hometown. And to make a map suitable for this slippery subject, she skillfully deploys a wide variety of approaches to imagemaking and writing. 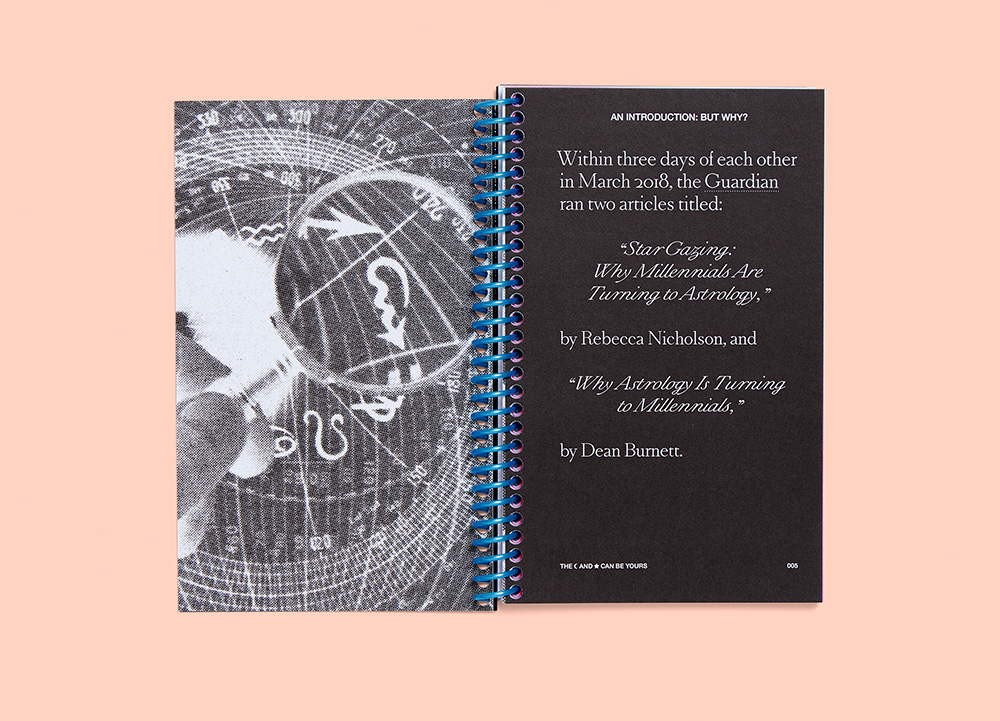 ©Magali Duzant, The Guardian, spread from The Moon And Stars Can Be Yours… 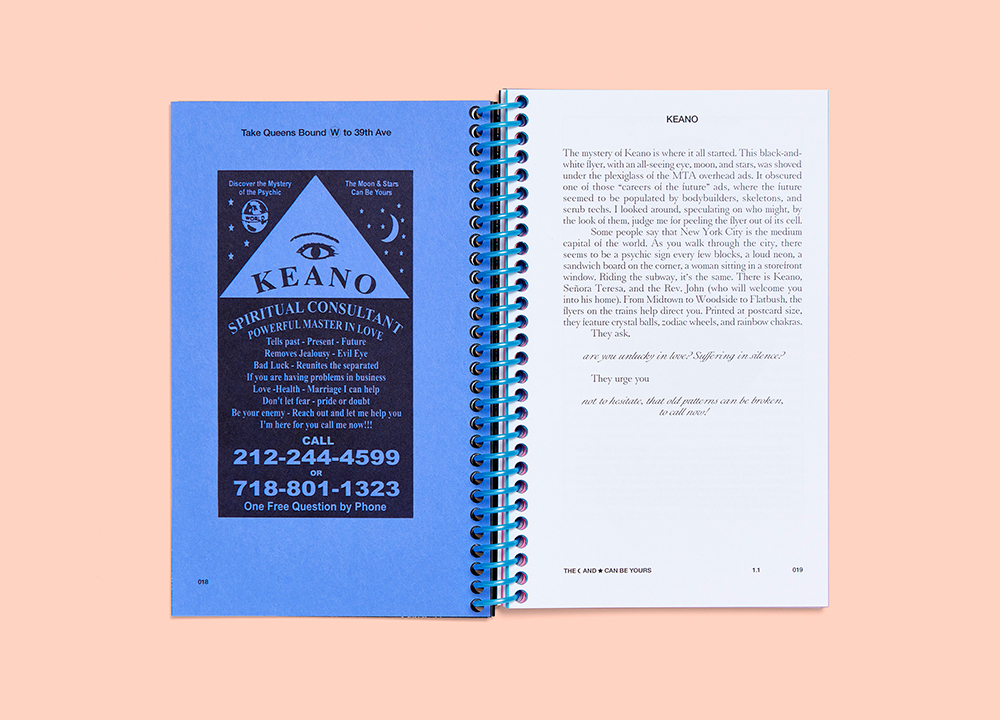 ©Magali Duzant, Keano, spread from The Moon And Stars Can Be Yours…

Throughout the book Duzant moves between prose, poetry, journalism and memoir. She also incorporates texts and images collected from a variety of sources including the New York Public Library Picture Collection, newspaper clippings, academic texts, email correspondence, daytime talk shows, and the aforementioned subway flyers. The Moon and Stars Can Be Yours is a highly researched and omnivorous photo-text. It fully integrates and gives equal weight to both photographs and text. Duzant also embraces the plurality of meanings that can be ascribed to every component. The images of hands that pervade the book embody this deliberate obliqueness. These tightly cropped images often depict hands being grasped or examined, but the meaning of these apparent rituals is open-ended. Are these gestures caring or coercive? 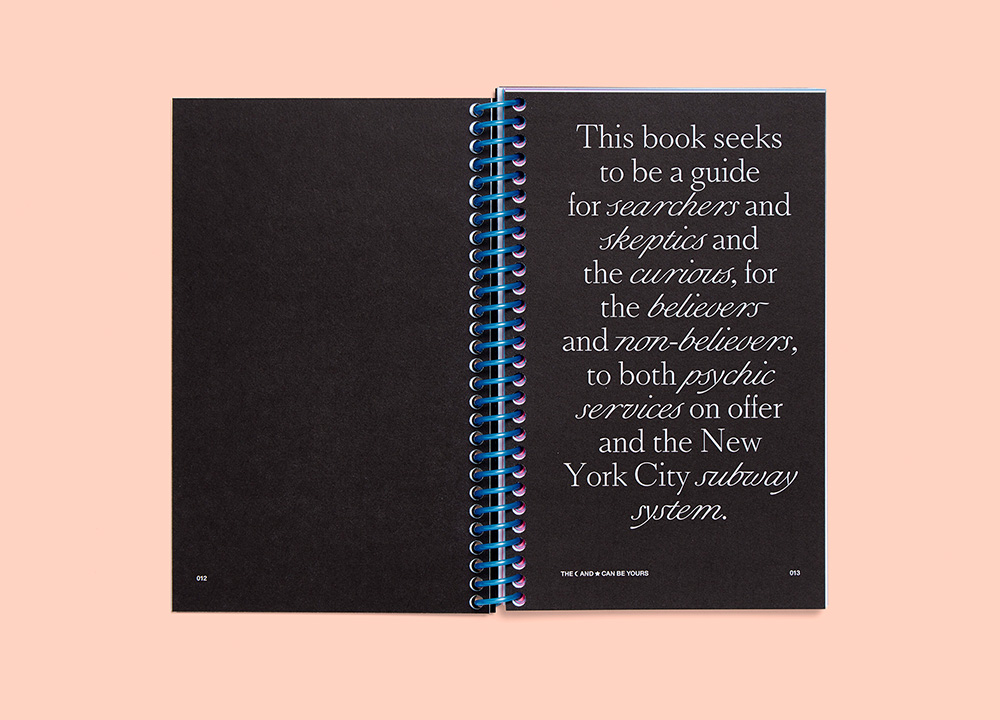 ©Magali Duzant, Seekers, spread from The Moon And Stars Can Be Yours…

Moreover, the majority of the images in the book transcend the typical categories that photographers impose; they are neither found nor made exclusively by the artist, so much as mediated by her. The most pointed example of this is Duzant’s aura image on page 89. If the reader believes in auras and the ability to capture them in a photograph, then Duzant is the primary maker of this image. If the reader does not believe in auras, the photograph on page 89 is only instigated by Duzant. In either case she is simultaneously the site, subject, and patron of the photograph. In this way The Moon and Stars also doubles as an investigation of photography, authorship, capitalism, and the particular existentialism of millennials. Duzant keenly observes, “Commerce paired with authority in capitalist systems equals a form of freedom. This is echoed in the ways in which the rise in spiritualist and mystical beliefs such as astrology, seances, and psychics trends during the rise of crises.” 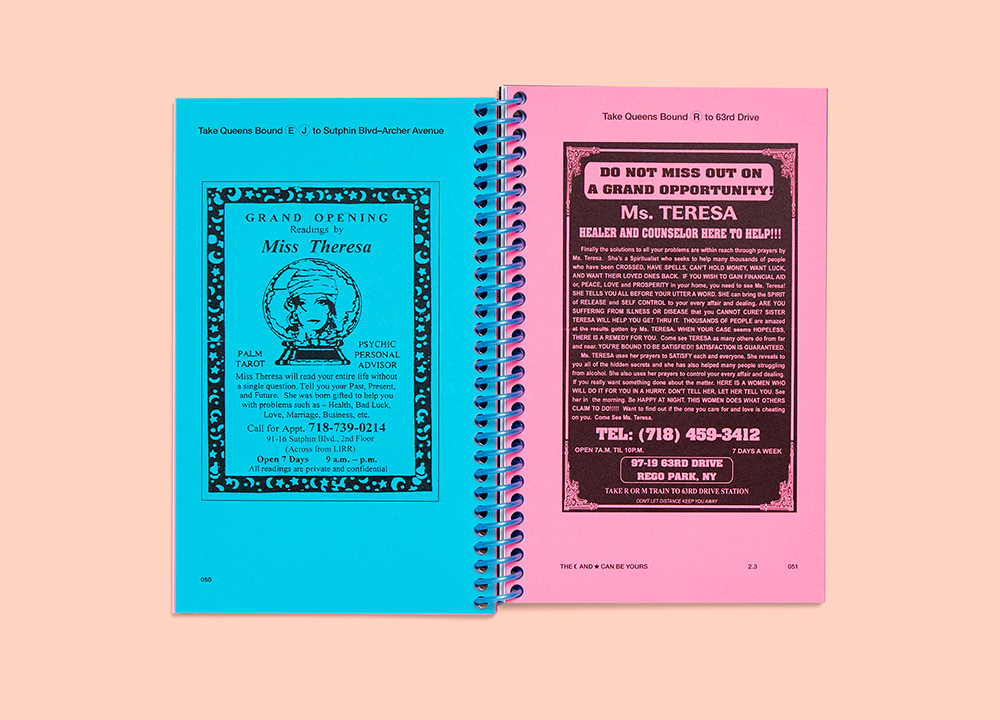 ©Magali Duzant, Ms Teresa, spread from The Moon And Stars Can Be Yours… The included flyers were found on the New York City subway system between 2012 and 2018. 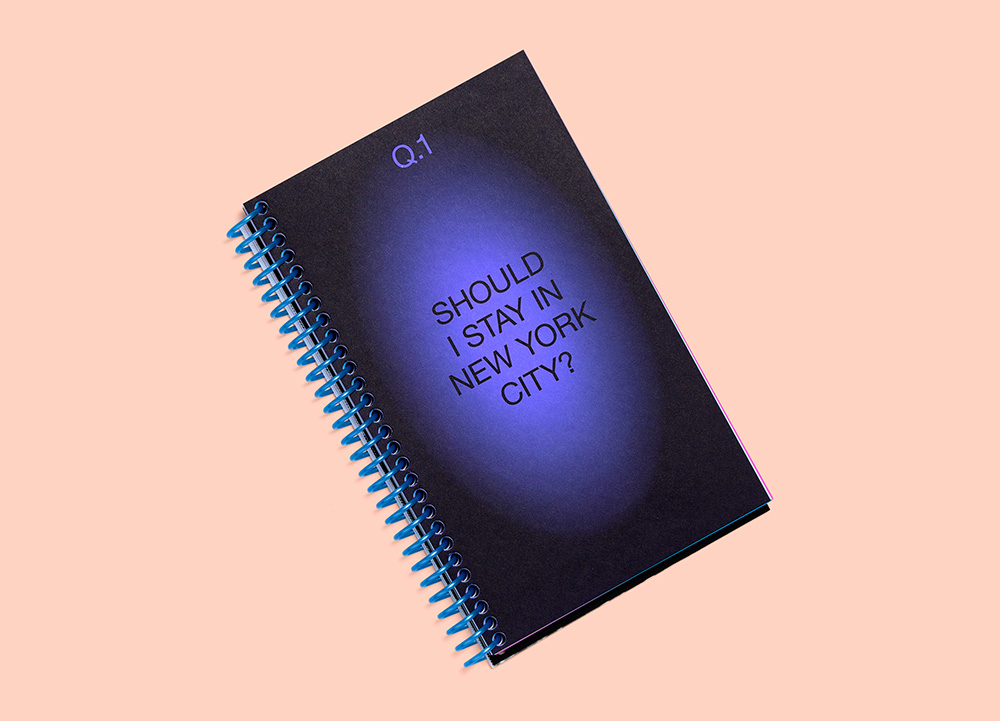 ©Magali Duzant, Should I Stay In New York? page from The Moon And Stars Can Be Yours… The book’s chapters are presented as questions.

Another major subtext of the book is the authority or lack of authority assigned to women’s voices, throughout history. To quote Duzant again:

“Psychics have held both vaunted status and the air of fraud around them for centuries. From the Oracle at Delphi to Miss Cleo, they have entered the collective narrative and stuck around in popular imagination, aligning perhaps with stereotypes of women—to be valued for use and comfort while simultaneously holding an aura of suspicion, to be distrusted for their seeming attempts at influence and power.” 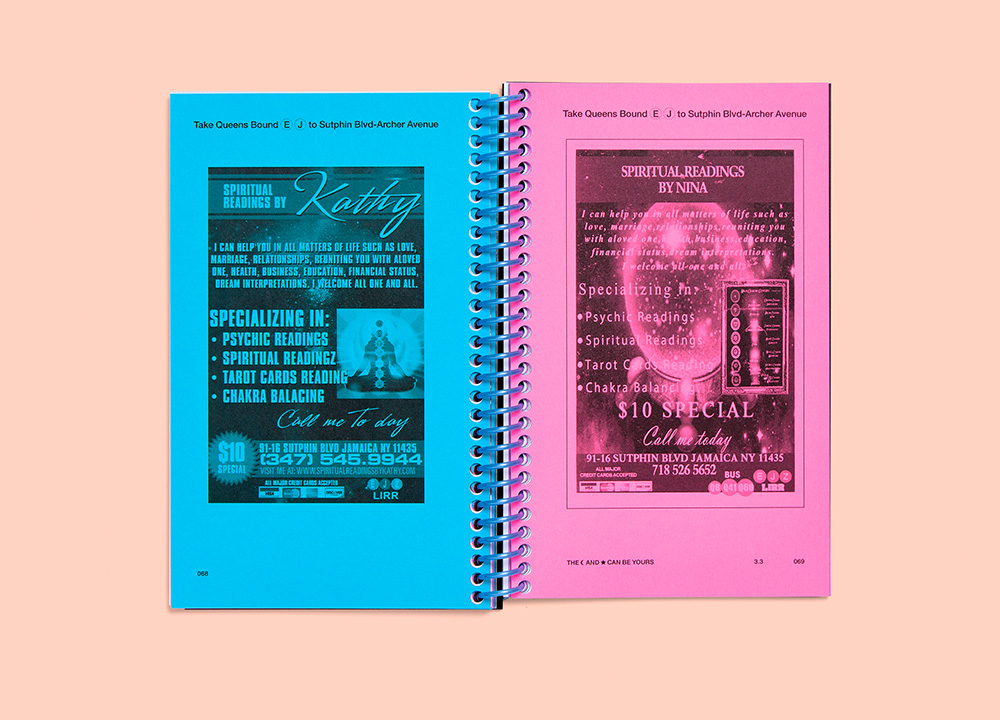 ©Magali Duzant, Nina / Kathy, spread from The Moon And Stars Can Be Yours…

This sadly unsurprising historical analysis lays the foundation for the personal narrative that runs through the book. The question of whether the future can be told and whether such predictions are accurate implies a deeper motivation beyond curiosity or a general spiritual search. To question the future, and what can be foretold, so deeply may also imply a NEED to know and a position of precarity. For all the complex associations therein, The Moon and Stars can also be read as a meditation on the need to search for answers, for a path, even if they seem unattainable. 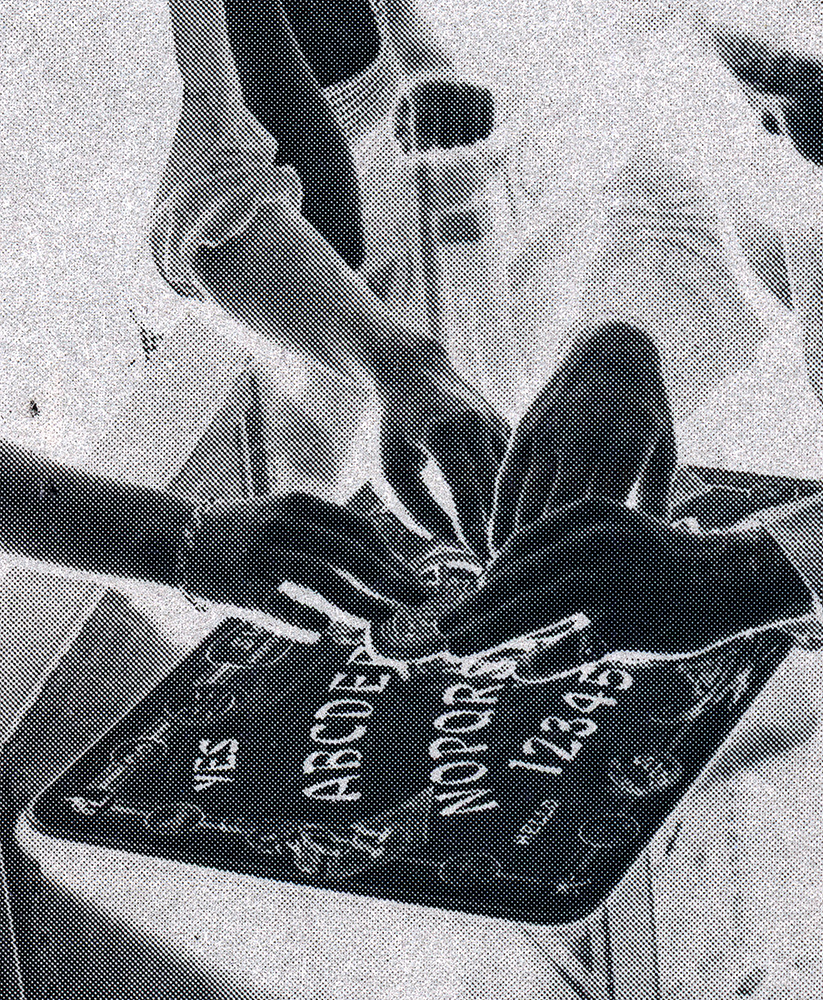 In her pursuit of psychic services Duzant, or the narrator, is also searching for her voice as an artist, for self-possession, for future certainty. This aspect of The Moon and Stars reminds me of another kind of map I once consulted regularly. In Letters to a Young Poet the writer Rainer Maria Rilke advises, “Live the questions now. Perhaps you will then gradually, without noticing it, live along some distant day into the answer.” Just over 100 years later the actor and author Anna Deavere Smith expressed a similar view in response to Rilke. In Letters to a Young Artist Smith counsels, “Start now, every day, becoming, in your actions, your regular actions, what you would like to become in the bigger scheme of things.” By the end of The Moon and Stars Can be Yours Duzant has extended this tradition, not by providing direct advice but by disclosing her own path toward living the questions perpetually, toward every day becoming. 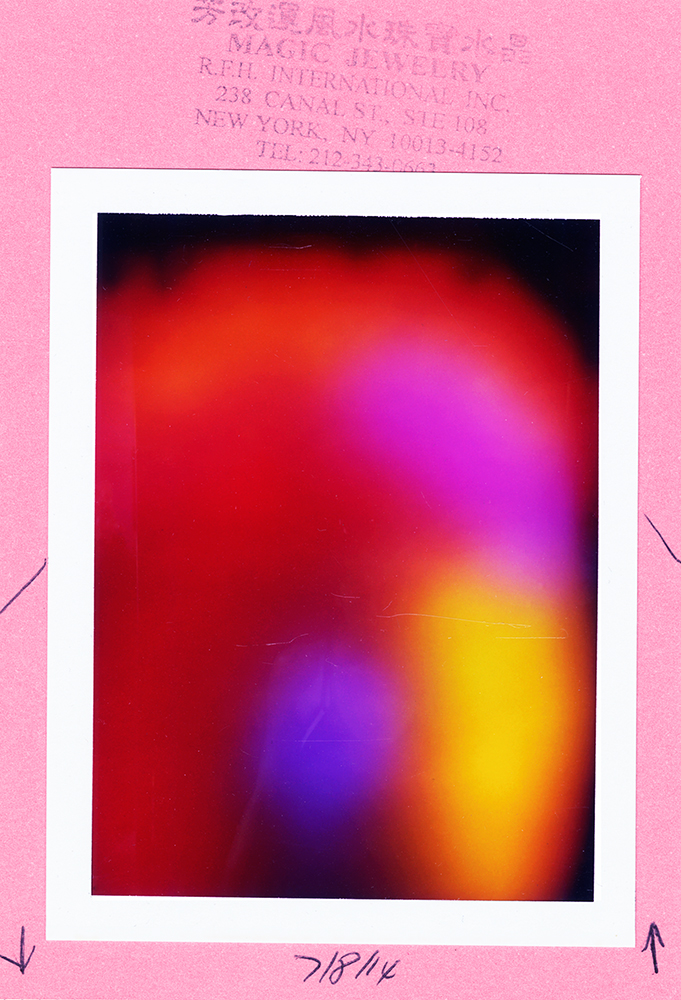 The Moon and Stars Can Be Yours: Notes on Subway Psychics

The Moon and Stars Can Be Yours: Notes on Subway Psychics is a pocket-sized guide to modern mysticism by way of the New York City subway system. This collection of writing and photography includes a short history of psychics in our popular imagination and more than a dozen vignettes about my foray into new age beliefs, alongside a curious collection of artifacts and archival images from my studio and the New York Public Library Picture Collection.

The book follows a freewheeling investigation into the rise of contemporary spiritualism in an age of uncertainty. Each chapter is presented in the form of an unanswerable question—Will I find happiness? Is there luck in my future? Will I find love that lasts?—and meanders into the murky world of palm readings, email fortune telling subscriptions, and impromptu sauna astrology sessions, to name just a few. 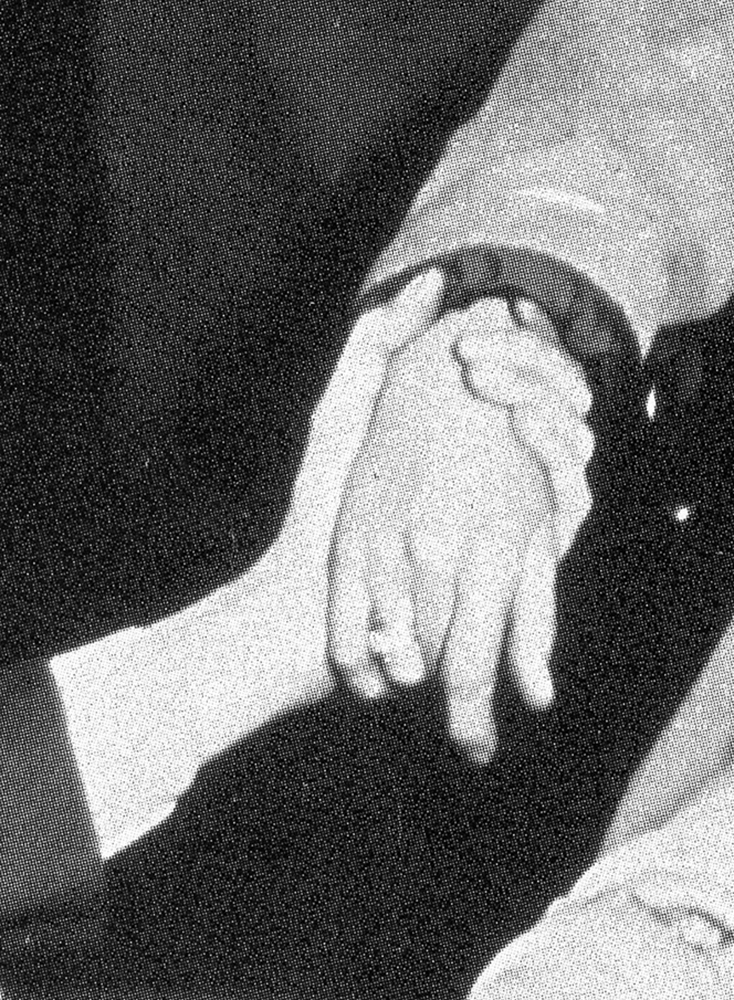 Magali Duzant is an interdisciplinary artist whose practice investigates the poetics of perception and lived experience through installation, photography, writing, and artist books. Her work has been exhibited internationally at the Queens Museum, NY; UQO Gallery, Canada; Centre for Contemporary Photography, Melbourne, AU and in upcoming exhibitions at Kim? Contemporary Art Centre in Riga and the Kunstgewerbemuseum in Dresden. She has published three artist books, I Looked & Looked, Light Blue Desire, and The Moon And Stars Can Be Yours and has completed commissions for Memorial Sloan Kettering, Supercollider, and Artists Alliance Inc. Duzant holds an MFA in Photography from Parsons School of Design and a BHA in Fine Arts and Visual Culture from Carnegie Mellon University. She lives and works in New York City. 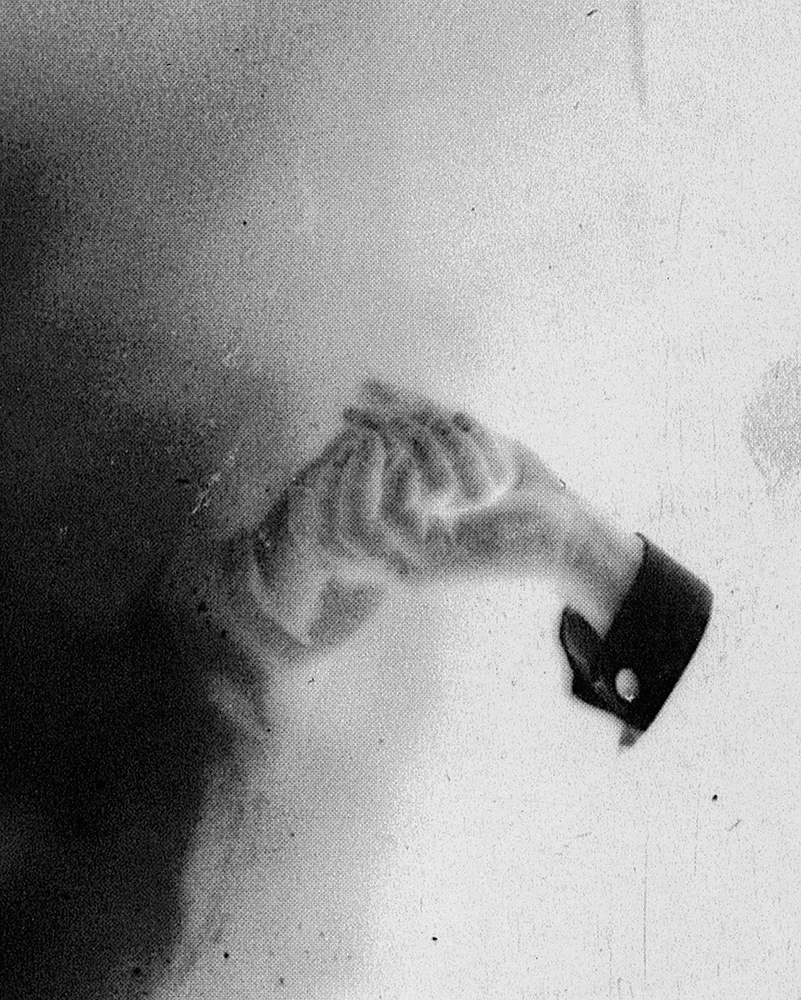 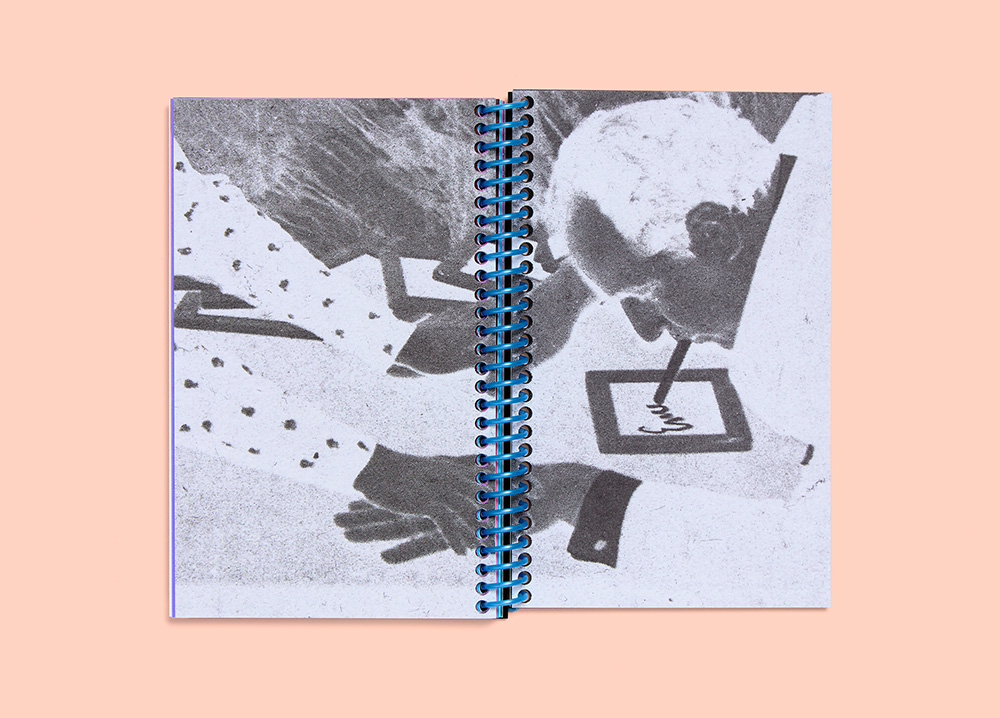 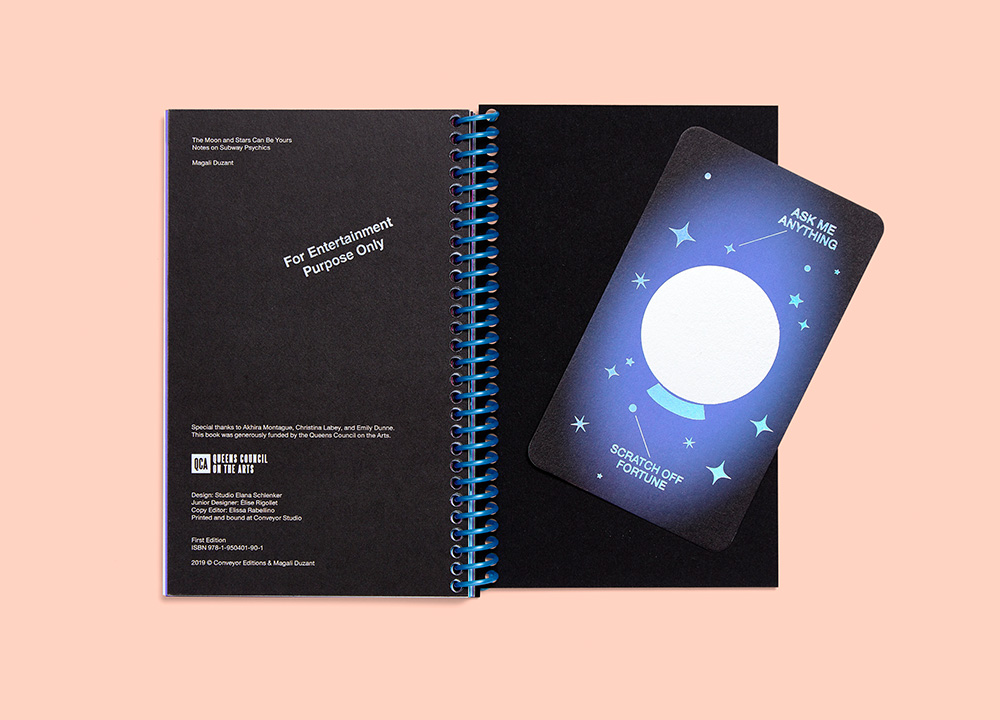 ©Magali Duzant, Scratch Off Fortune Card, final spread from The Moon And Stars Can Be Yours… At the back of each book is the stamped phrase, For Entertainment Purposes Only, referring to a clause in New York state penal code and a scratch off fortune card.