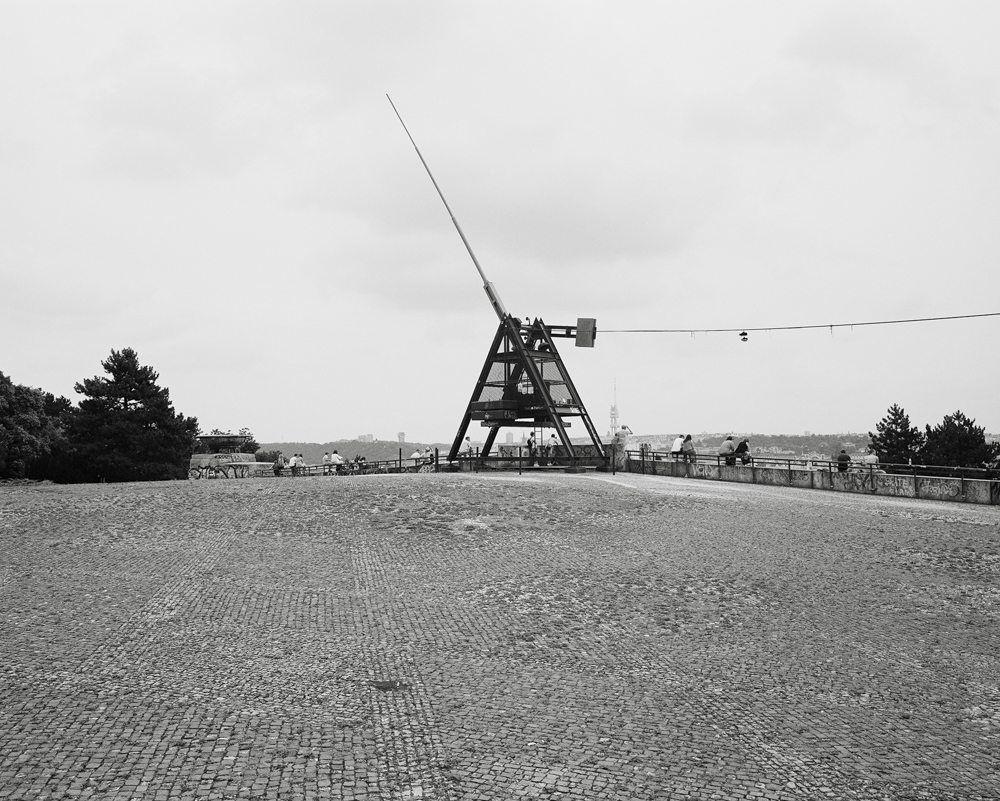 I had the pleasure of reviewing the work of photographer Matthew Moore at Fotofest this past March. We had a lively conversation about his continuing examination of landscapes that hold history. This concept has always fascinated me and I appreciated his thoughtful and articulate approach to documenting markers of the past, and with his new work, the remnants of those markers. Today I share his project, Post-Socialist Landscapes, but I am very excited to share that Matthew with take over as editor this week and share other image makers that create work about the history of the landscape.  An interview with Matthew follows. 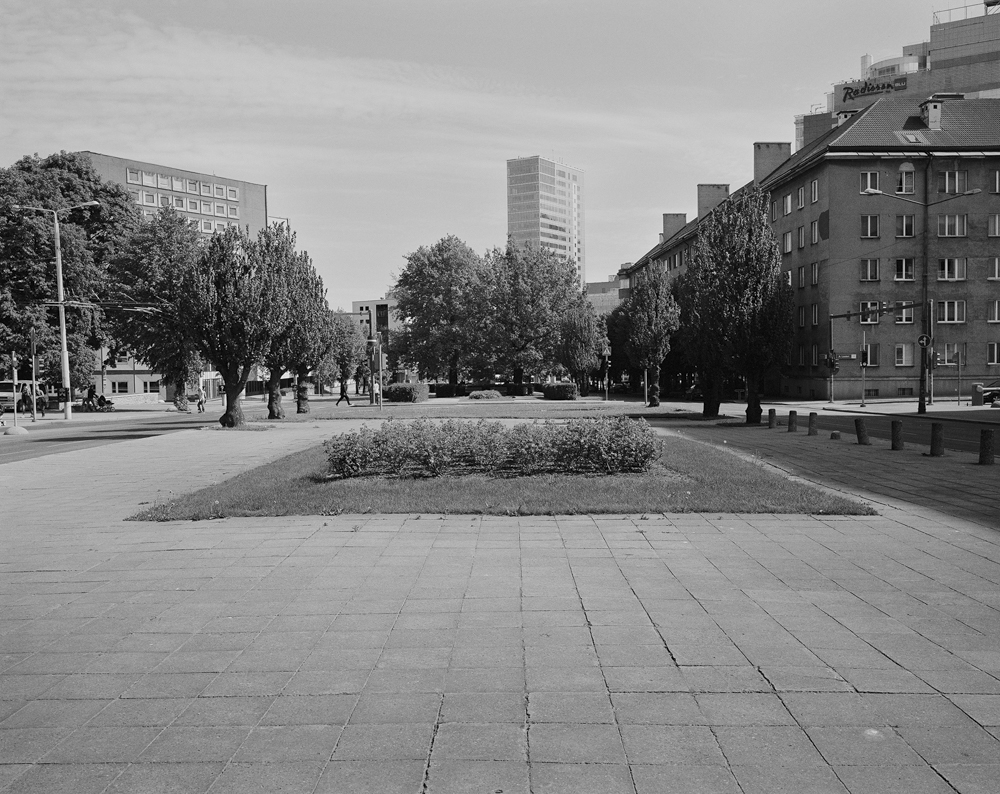 This project is an investigation of the rural and urban landscape of countries that were once occupied by the Soviet Union. The photographs in Post-Socialist Landscapes fall into two groups. The first set of images depicts the exact location where statues of Lenin and Stalin once stood. These photographs seem to portray obscure public squares or city parks, but to some local inhabitants, these spaces are still charged with a more ominous presence. In some cases, the absence of the statue is more obvious, while in others the local government has gone to great lengths to transform the space. The second group of photographs focuses on the fate of the discarded communist monuments that once stood throughout the Eastern Bloc. Today they can be found stored behind buildings or gathered in private parks. Placed safely away from public view, their power to intimidate has been stripped from them. Together, these images tell the story of how different societies seek to control historical narratives through manipulation of the land and urban space. While some cultures go to great lengths to eradicate reminders of their unwanted past, others are willing to let them slowly disintegrate. Some societies even leave purposeful reminders of a painful past in an attempt to keep history from repeating itself. This project also calls attention to the process taking place in the United States when it comes to the debate over removing confederate monuments. Now that societies in Europe have had more than thirty years to heal from these wounds, this project may shed light on how the US can deal with its own unfortunate legacies. Regardless of the strategy, our past is recorded in the landscape. Each new layer tells an important story about the way history, and even memory, is shaped by human intervention. 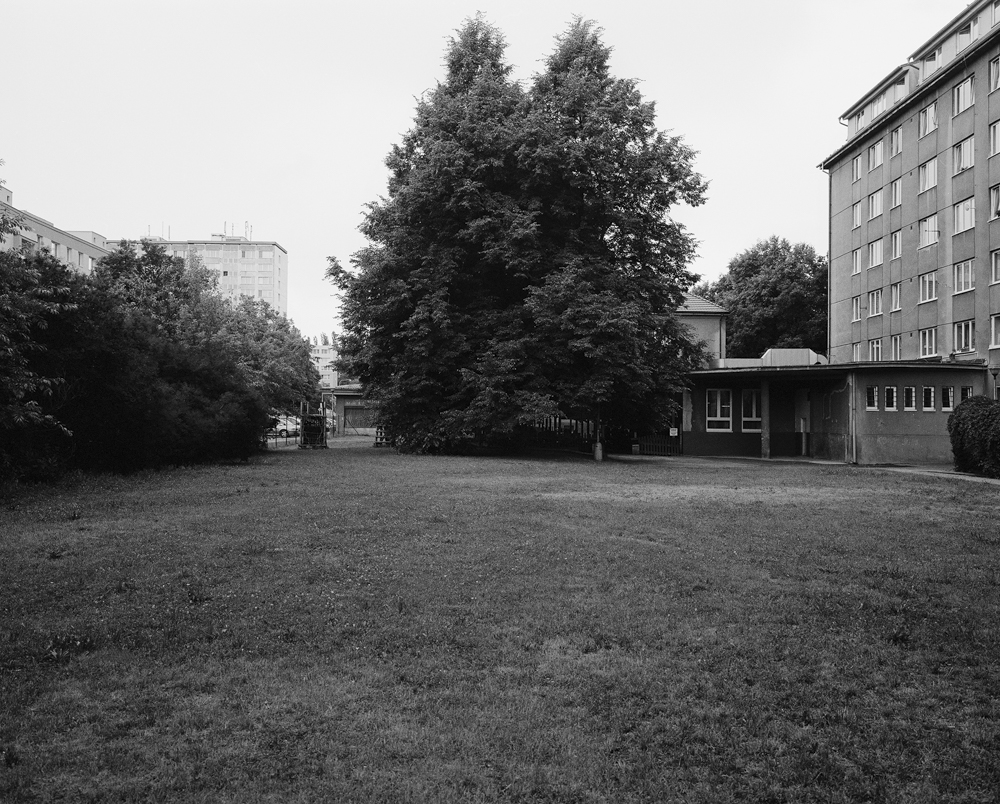 Congratulations on the work, Matthew! What brought you to this project and your interest this particular subject and place in the world?

Why thank you! I’m honored to have the work on Lenscratch today, and I’m very excited about guest editing for the rest of the week – thank you for the opportunity to show off some of my favorite artists!

I’ve been living in the Czech Republic off and on for the last 20 years. I first moved there in 2000 and end up marrying a Czech, so I feel like I have this weird insider/outsider perspective. When you live there it’s pretty easy to become numb to the signs of history that are all around you. As an outsider though, some of the things I would see on a regular basis, like empty pedestals for example, stood out to me. So, I’ve been sort of training myself to notice objects like that for a long time now. This particular project began in 2014 when I was an artist-in-residence at the Vilnius Academy of Arts, Nida Art Colony in Lithuania. The border with Kaliningrad was just down the road and I was fascinated by the tension this close proximity with a former occupier created. I began doing research on the area and pretty quickly I came across the story of Vytautas Vičiulis, who, on the evening of March 2nd 1989, approached the statue of Lenin in the Lithuanian city of Klaipeda and set him set on fire. After learning about this event I hitched a ride to Klaipeda with one of the workers at the Colony. He remembered the statue of Lenin and was able to take me to the exact spot where it was. That was the beginning of the first part of this project. The research part of the process is just as important as the shooting part. That is something that drives all of my work. I almost always find my photographs on maps before seeing them in person. Because I live and work in the US now, I spend the school year doing researching for the project. I use Google street view and other tools to identify locations and then in the summer I go over with a very detailed list of things that I want to shoot. 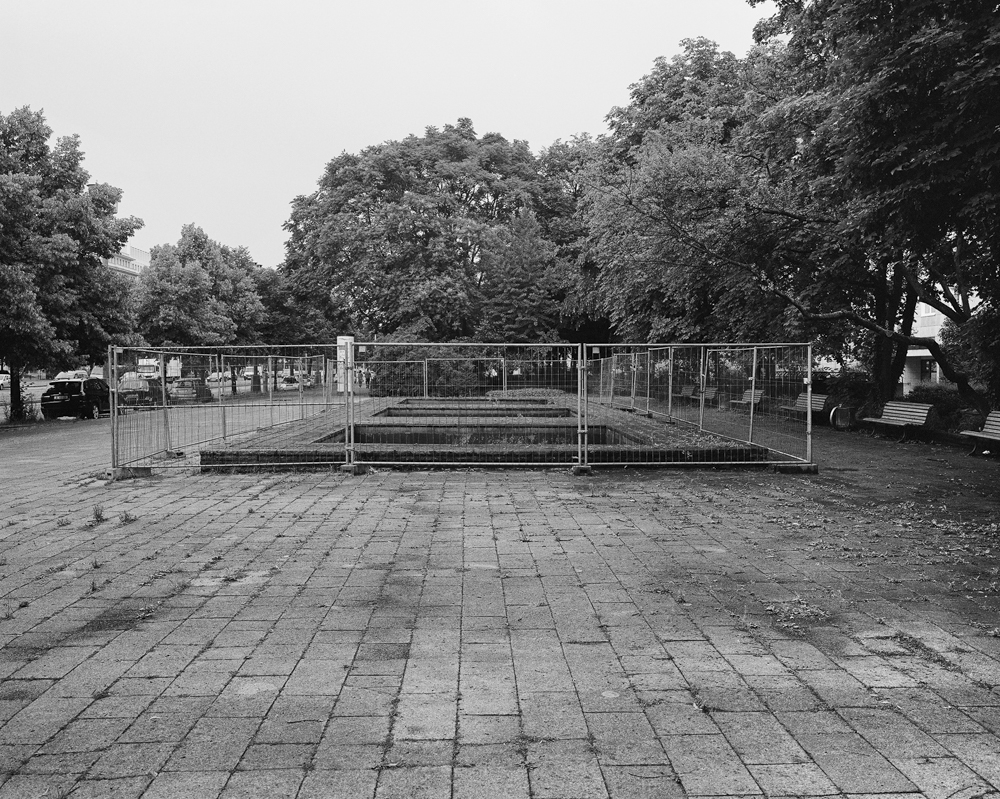 If I remember correctly, I told you about one of my favorite books, Slow Paparazzi, with images of unremarkable places where the paparazzi have just missed the celebrity. The fascination is in the idea of what was there and not the actual celebrity. Your work has that same sense of not knowing but knowing. Can you speak about that?

I love the idea behind the Slow Paparazzi project. I am slightly obsessed with the idea of disappearance and it’s relationship to photography. In looking at the locations where statues of Lenin and Stalin once stood, there is often a physical reminder of what was there, even if the evidence is just an awkward emptiness. For that reason, I refer to this part of the project as “scars”. The title of each image informs the viewer of what was there, so that’s similar to how Slow Paparazzi works. And like Slow Paparazzi, my images are not really about the missing statue. They are about how societies have altered the space in order to control historical narratives. The project as a whole is about the role of human intervention in constructing memory. The Czech writer, Milan Kundera said, “the struggle of man against power is the struggle of memory against forgetting”. That is what these photographs seek to explore. 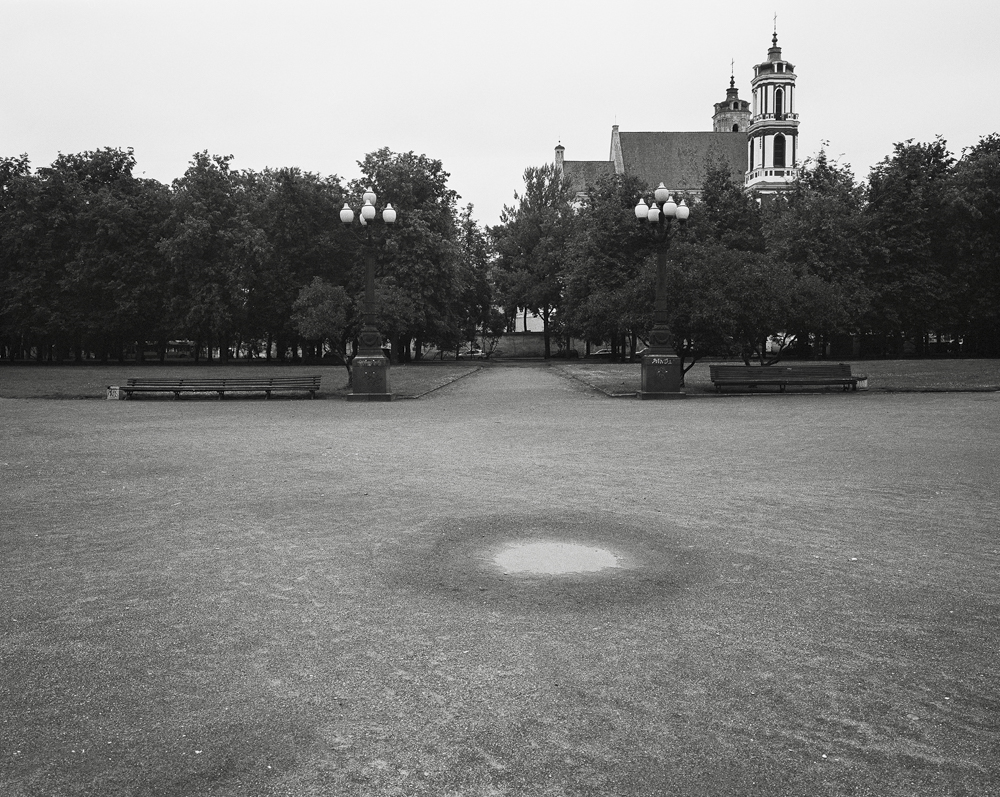 Our own country is scared with histories and monuments that recognize those troubled histories. In our effort to remove those markers, how does a society document the negative? How does a society eradicate its horrors, but remember them so they are not repeated?  Is this a consideration in the areas you have documented?

Well, first I would say I personally do not claim to know how to handle these complex problems. The images are purposely objective because it’s not really my place to say how other cultures should deal with their traumas. I do think that there is no one size fits all approach. Each case is unique and locals need to be heavily involved in the process. I also feel this is an area where we have a lot to learn from Europe. There has been so much upheaval there and for that reason, they have a lot of experience with this problem. I’ve seen many approaches and some are quite impressive. There are many countries that have turned the former headquarters of the local version of the KGB into a kind of museum or educational experience. The one in Budapest is a standout but you’ll find them in many cities. Vilnius, Riga and Berlin all come to mind. The Hungarians have done a great job dealing with the history of the 1956 revolution that was brutally crushed by the Soviets. That is when they tore down the statue of Stalin, which has finally been replaced by a really beautiful monument. There are other monuments all over the city at key spots where the fighting took place. The Czechs on the other hand have done very little. The former headquarters of the StB (the Czech version of the KGB) is now a police building with almost no indication of its dark history. The local joke is that the name on the building has changed but the people working there are all the same. It really seems to depend on how willing a culture is to self-examine. That can be a very uncomfortable process since many locals were involved in the oppression themselves. I wonder how well we have done with places that Native Americans were massacred? Or take camp Manzanar for example, the Japanese concentration camp in California. It’s a place you can visit, but how well have we really done highlighting the injustice of what took place there? My guess is we could do much better. 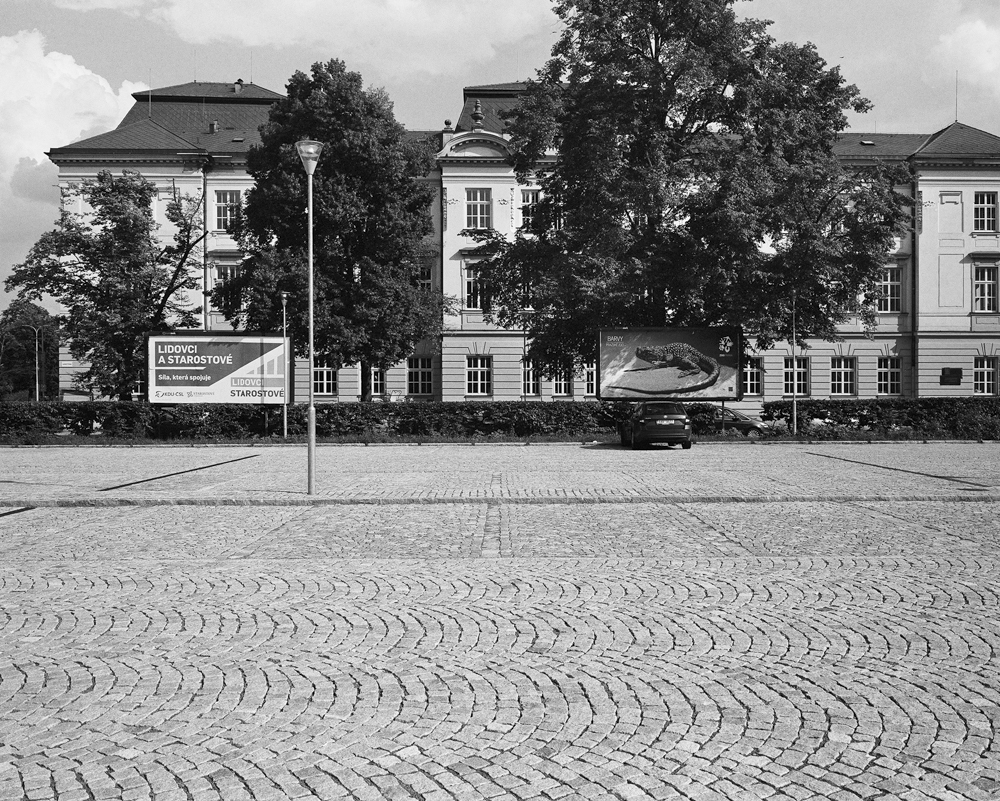 The second part of your project is about the hidden monuments, which is also fascinating. You state that the power has been stripped away from the statues, but isn’t there some power in the owner coveting the objects and making sure they live on?

There are several cases where private collectors have bought up statues and created parks for them, and I do see that as an attempt to preserve their importance, if not their power. Fortunately, the results of this are usually pretty comical. You never find these places in the center of a city or set up in any official way that would make the statues seem like they are important works of art or cultural heritage. A classic example is Grutas Park in Lithuania. It is way out in the county near the border with Belarus. People refer to it is as Stalin World because it feels like an amusement park. There are even animals in cages, which is awful, but it makes the statues themselves function like animals in cages. There are even several statues in a pen with lamas. It’s ridiculous, and perhaps, very fitting. There are also some cases where private collectors have attempted to make a mockery of the statue on purpose. Once I took my kids to a labyrinth in the Czech Republic because someone told me there was a Stalin statue there. Sure enough, the owner of the labyrinth had taken an old statue of Stalin and buried it halfway in the ground in the center of the labyrinth. When we bought our tickets the woman at the counter told my kids that if they make it to the center of the labyrinth there is a monster there. 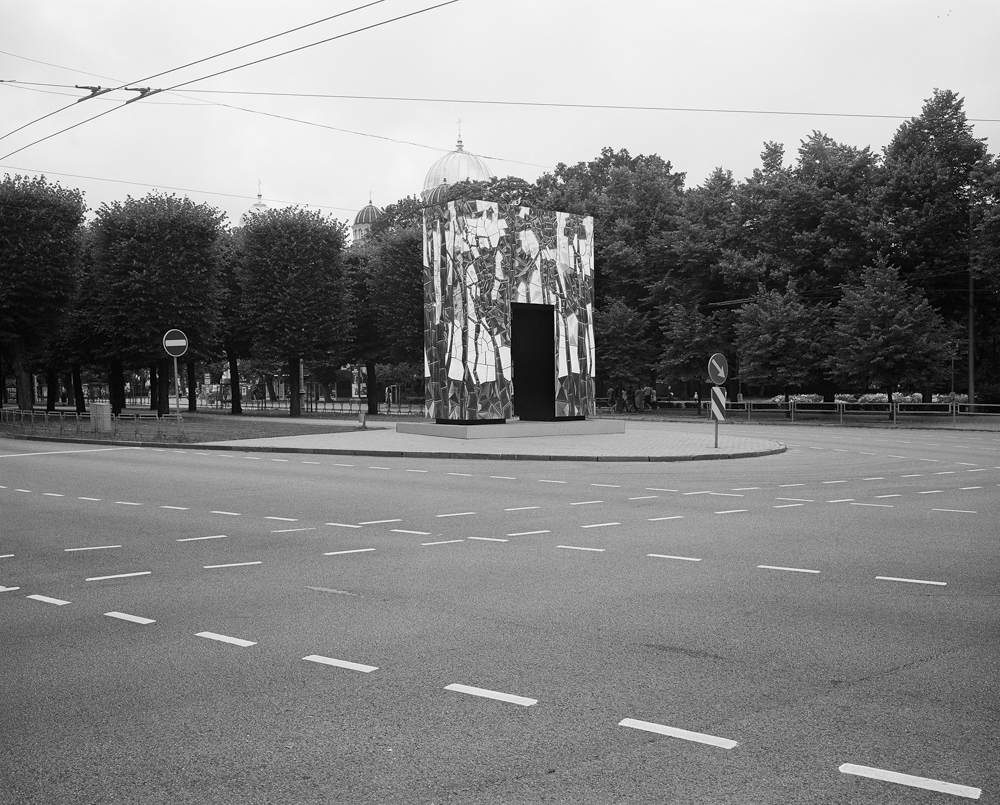 I’m always working on several projects at once but I am starting to focus most of my energy on a project that examines the Cold War nuclear infrastructure, both in the Untied States and in the former Eastern Bloc. There are all sorts of physical reminders that people on both sides of the Atlantic were living in constant fear of nuclear war because our politicians couldn’t get along. It seems like a good time to consider that era again, especially with the looming threat of a new Cold War with China, and a nuclear North Korea. My pet name for the project is Memento Mori, because these things really are daily reminders of death. 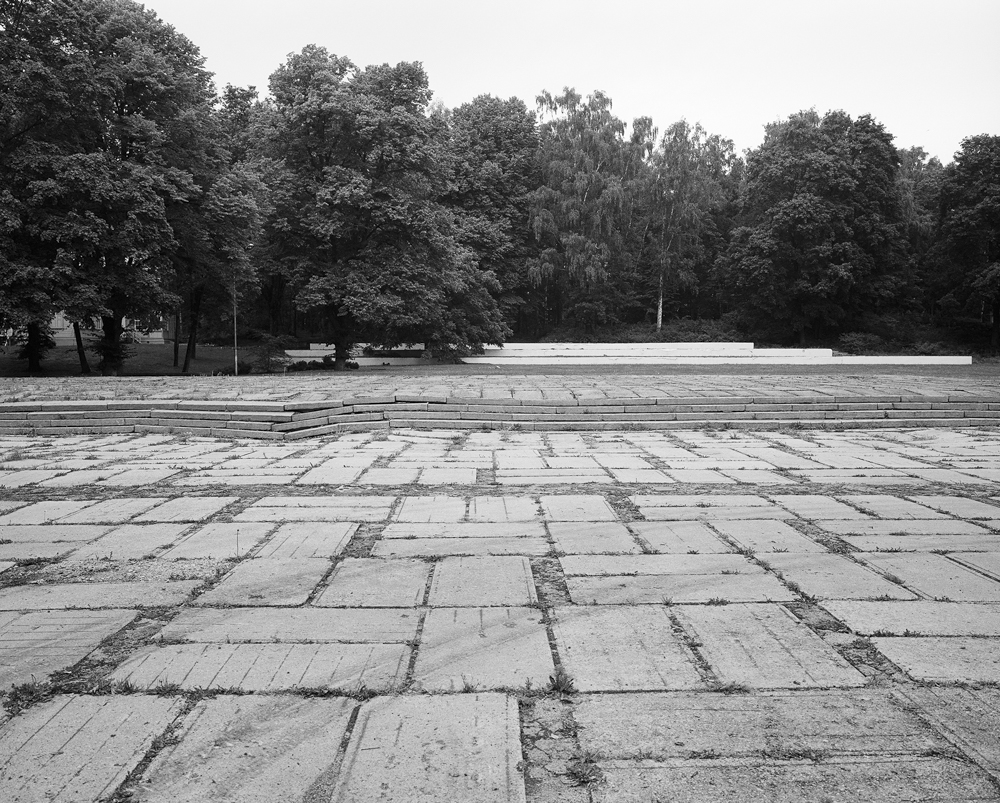 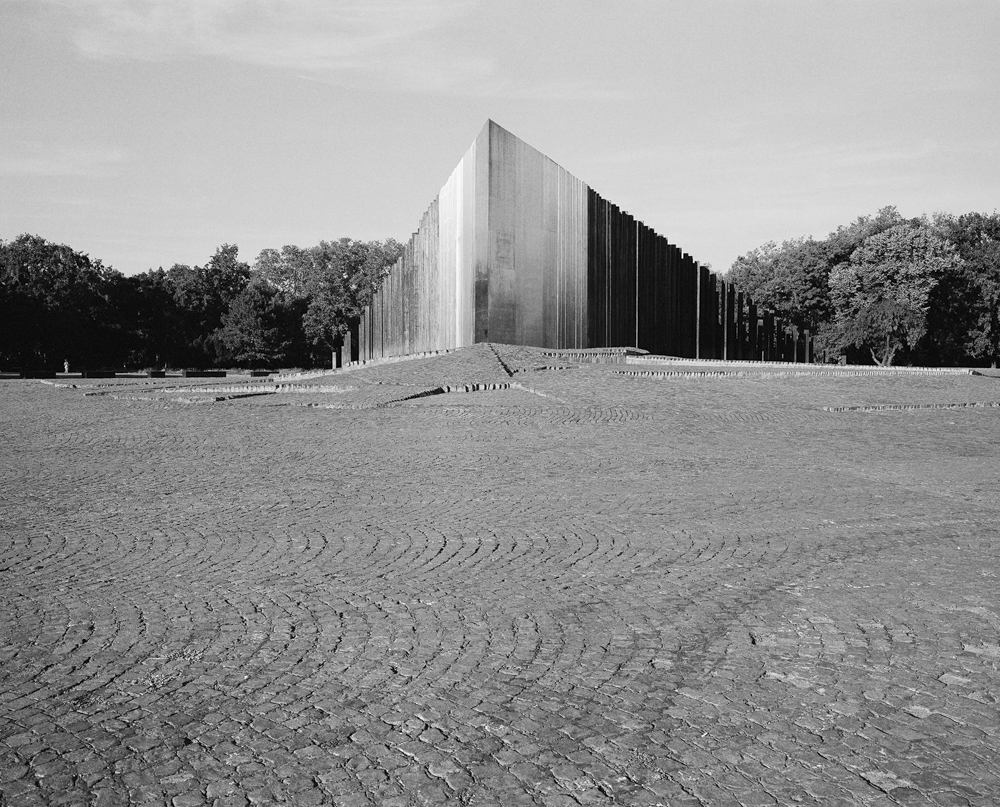 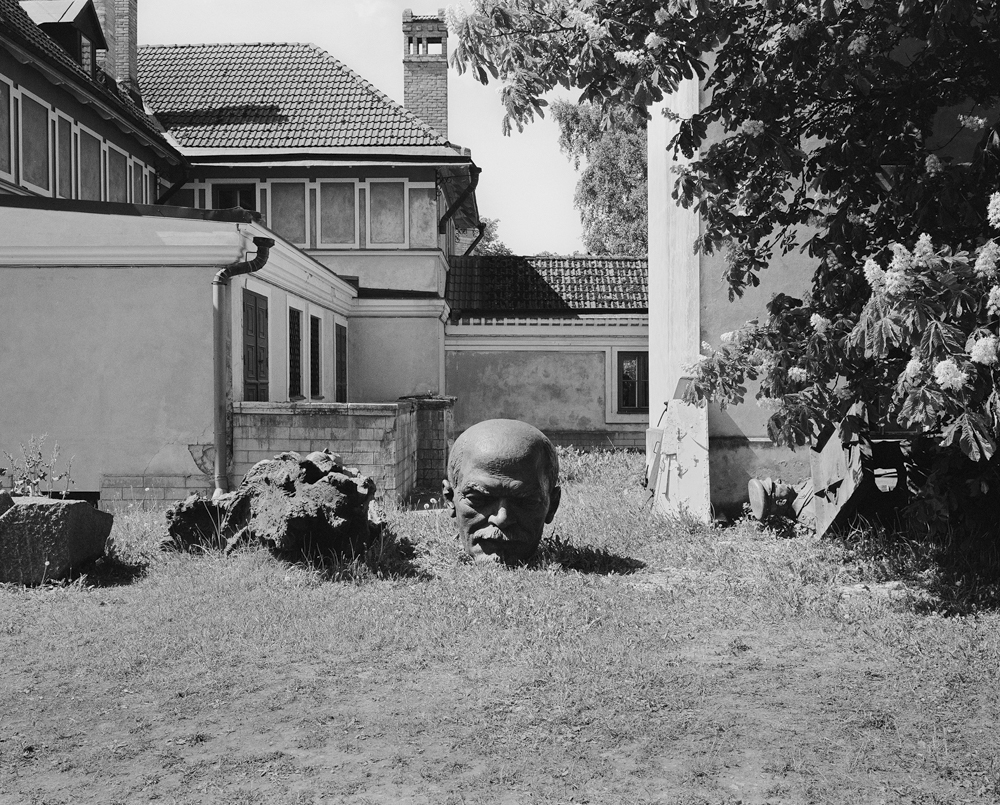 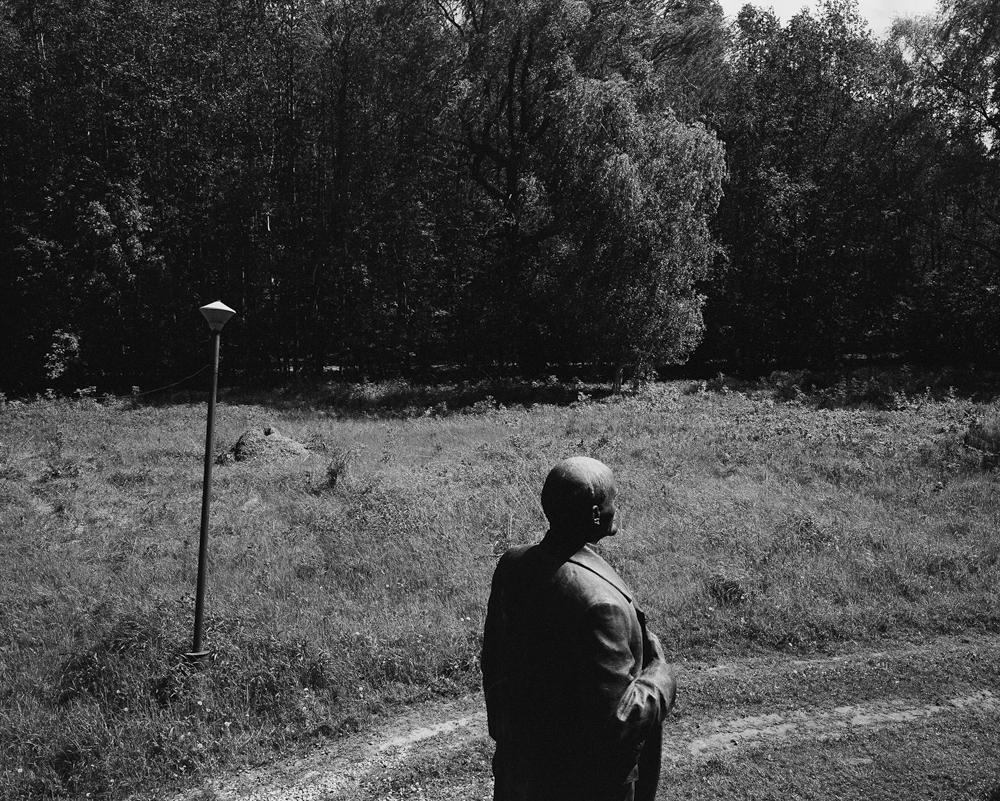 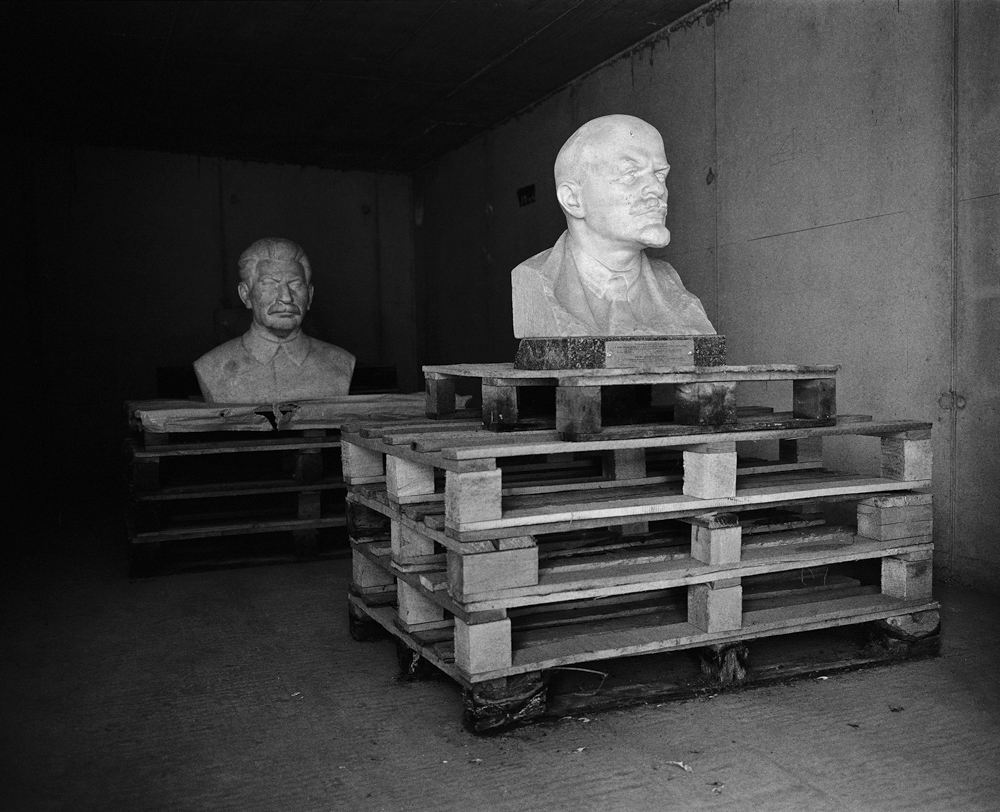 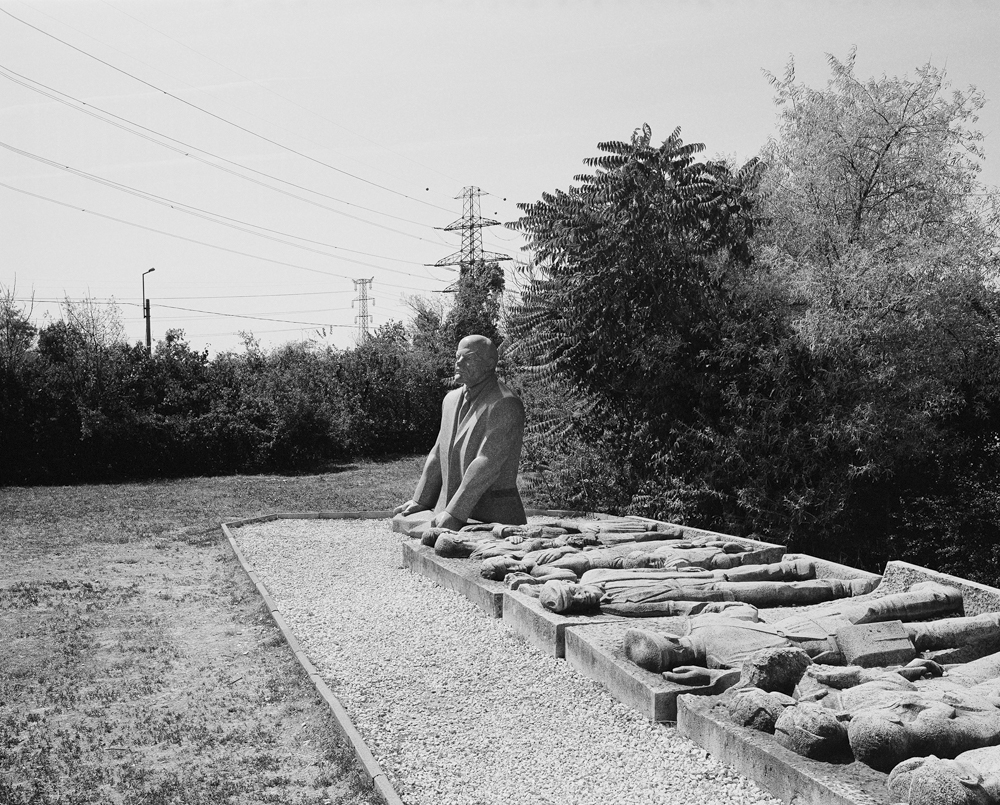 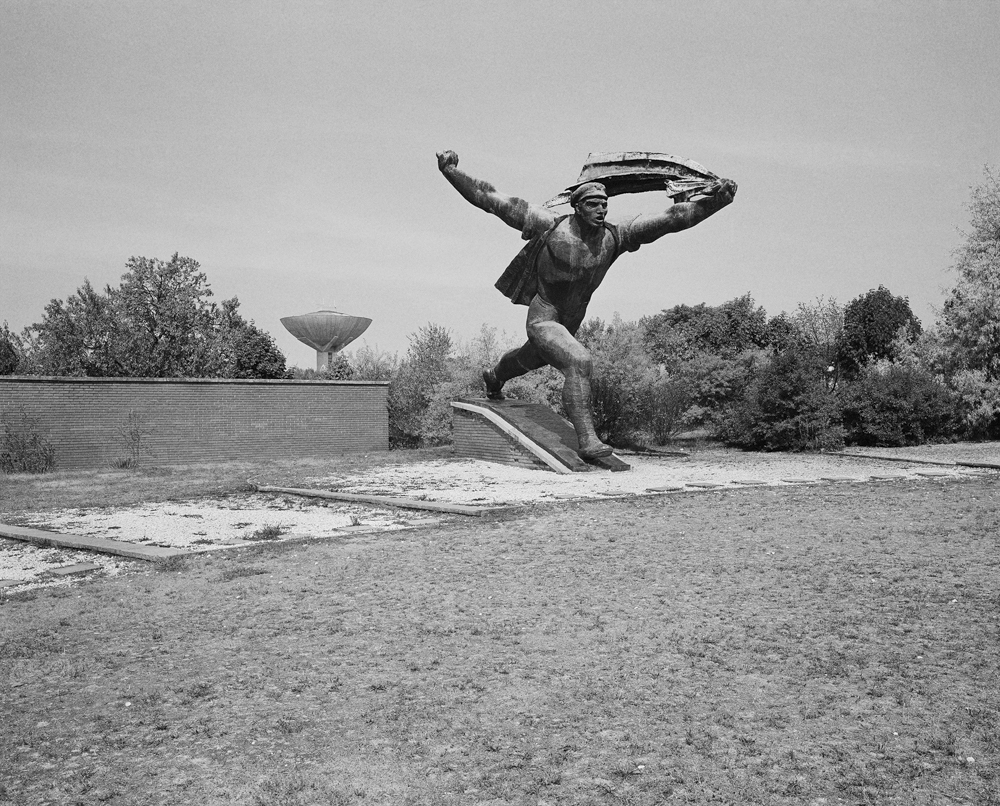 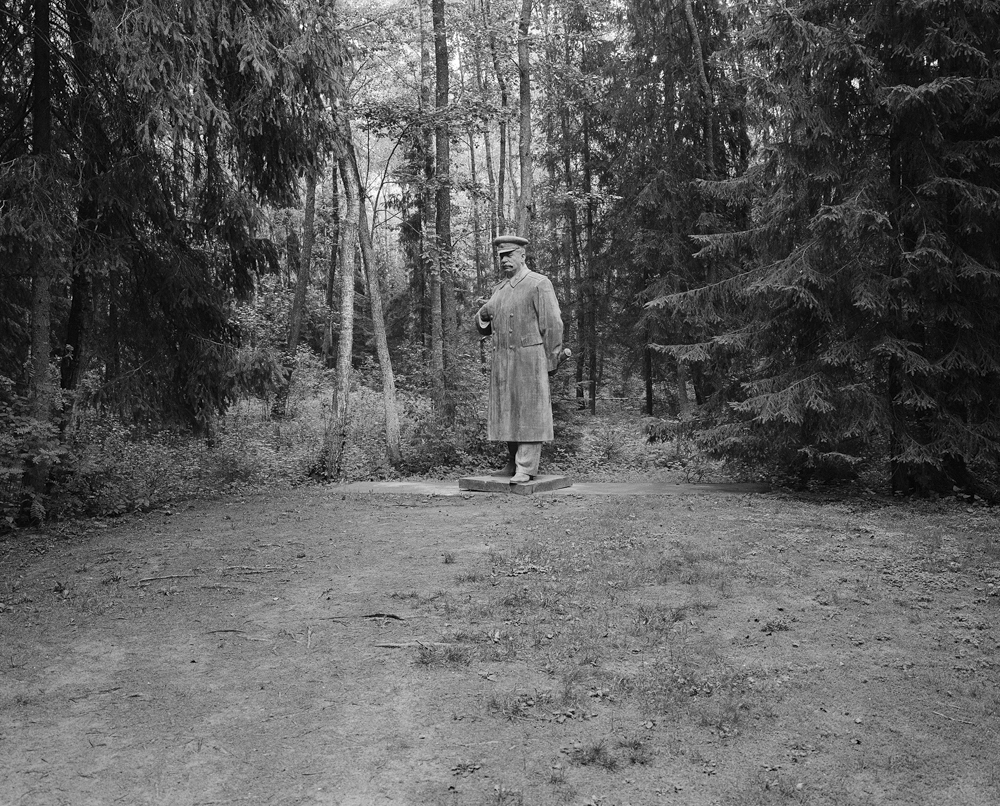 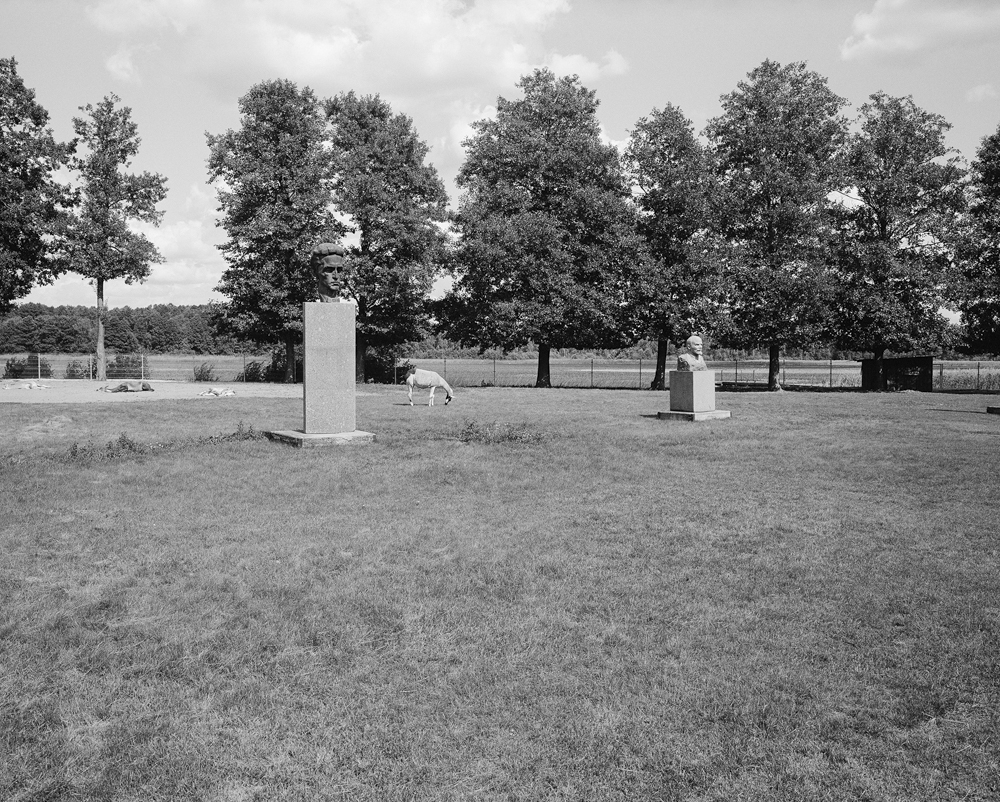 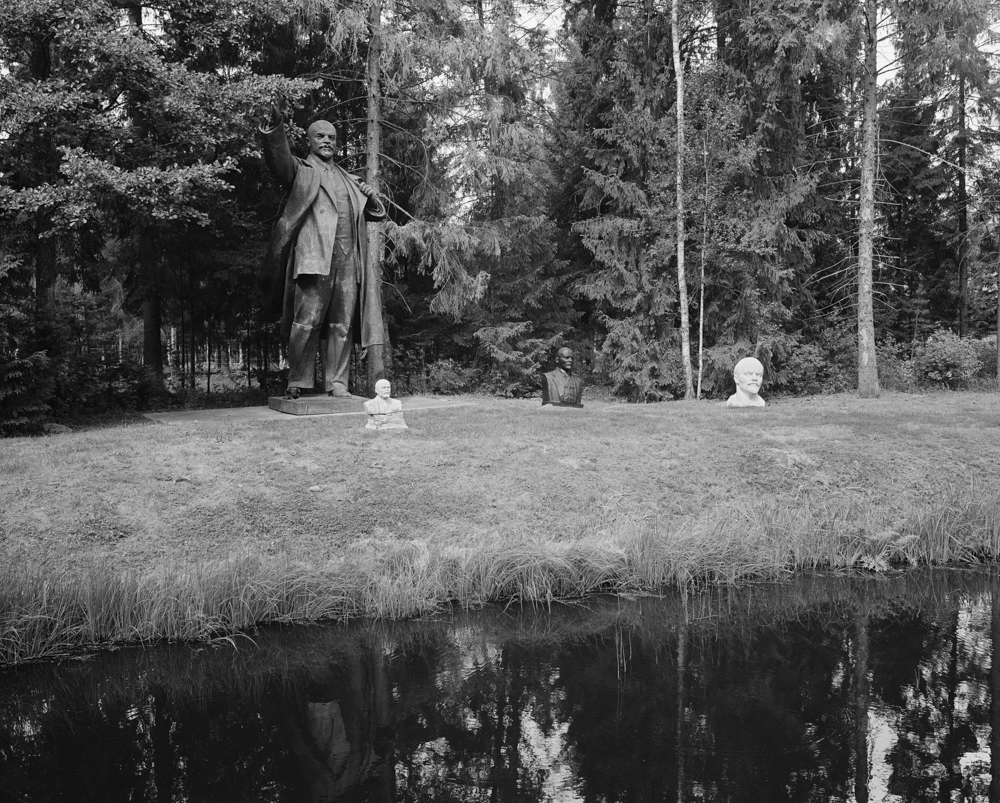 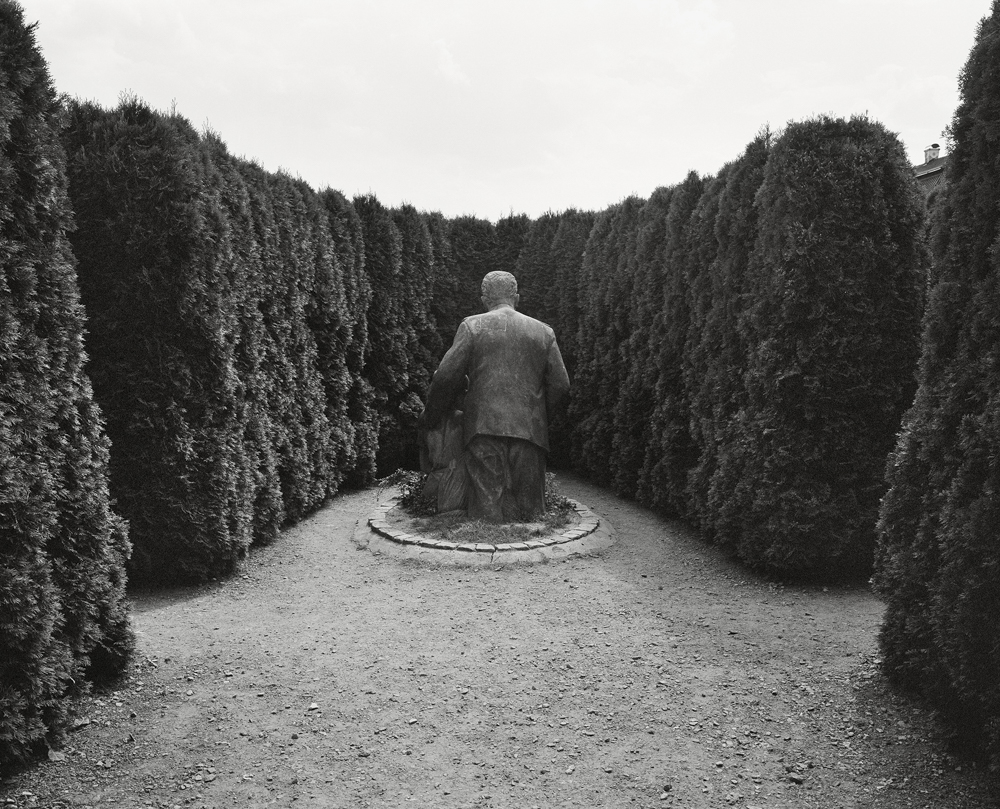 ©Matt Moore, Discarded Monument at the Center of a Labyrinth, Czech Republic, 2018