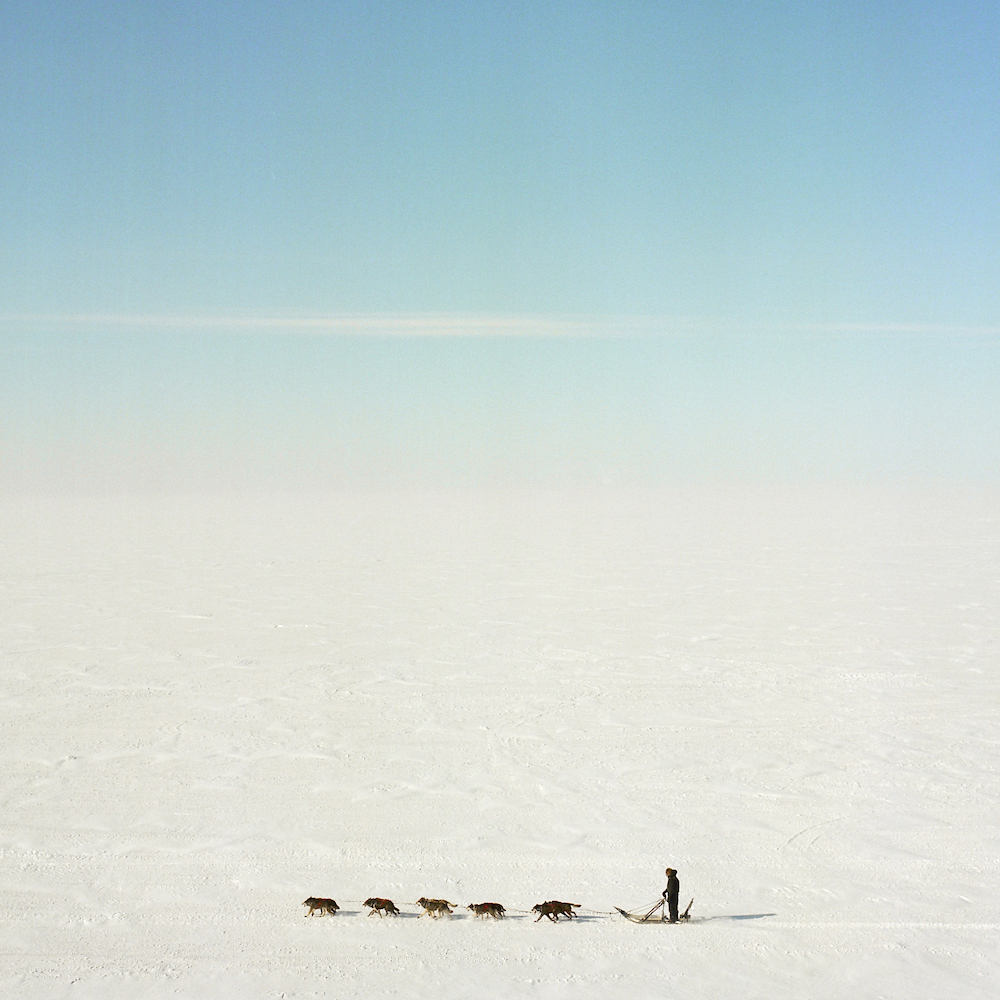 A dog team on the frozen Kotzebue Sound, photographed from the observation deck of the Nullagvik Hotel in Kotzebue, Alaska. 2016.

The objective was to elevate Indigenous voices and highlight Indigenous issues, as well as create opportunities for the artists, with the end goal being securing purchases of Indigenous artwork within mainstream museums’ permanent collections.

Last year’s feature on Lenscratch led to exhibits at the National Center for Civil and Human Rights in Atlanta, Georgia and the Griffin Museum of Photography in Winchester, Massachusetts.  The exhibition at the Griffin Museum created the space for photography curators from the Boston Museum of Fine Art to view and ultimately purchase (with a gift provided by a donor) three pieces for their permanent collection from exhibiting artist Kiliii Yuyan’s series, Masks of Grief and Joy.

The timing of that show could not have been better as The Museum of Fine Arts, Boston (MFA), had recently appointed Marina Tyquiengco (CHamoru) as the inaugural Ellyn McColgan Assistant Curator of Native American Art. While Yuyan’s work will be housed in the Department of Photography, it holds great interest within the Art of the Americas Department, as Tyquiengco will be pivotal in shaping the MFA’s commitment to Native American art and culture as she builds, displays and interprets the collection through innovative exhibitions and installations.

Today, we celebrate Indigenous People’s Day and continue that celebration throughout the week with Indigenous art, artists and issues at the forefront. This year we asked the participants from 2020 to nominate their fellow artists for 2021. This year’s featured artists include, Pat Kane and Brian Adams (nominated by Kiliii Yuyan), Robby Dick (nominated by Kali Spitzer), Jenny Irene Miller (nominated by Jeremy Dennis), Shelby Lisk (nominated by Pat Kane) and Tonita Cervantes (nominated by Donna Garcia).

We kick off the week with Brian Adams, I AM INUIT. 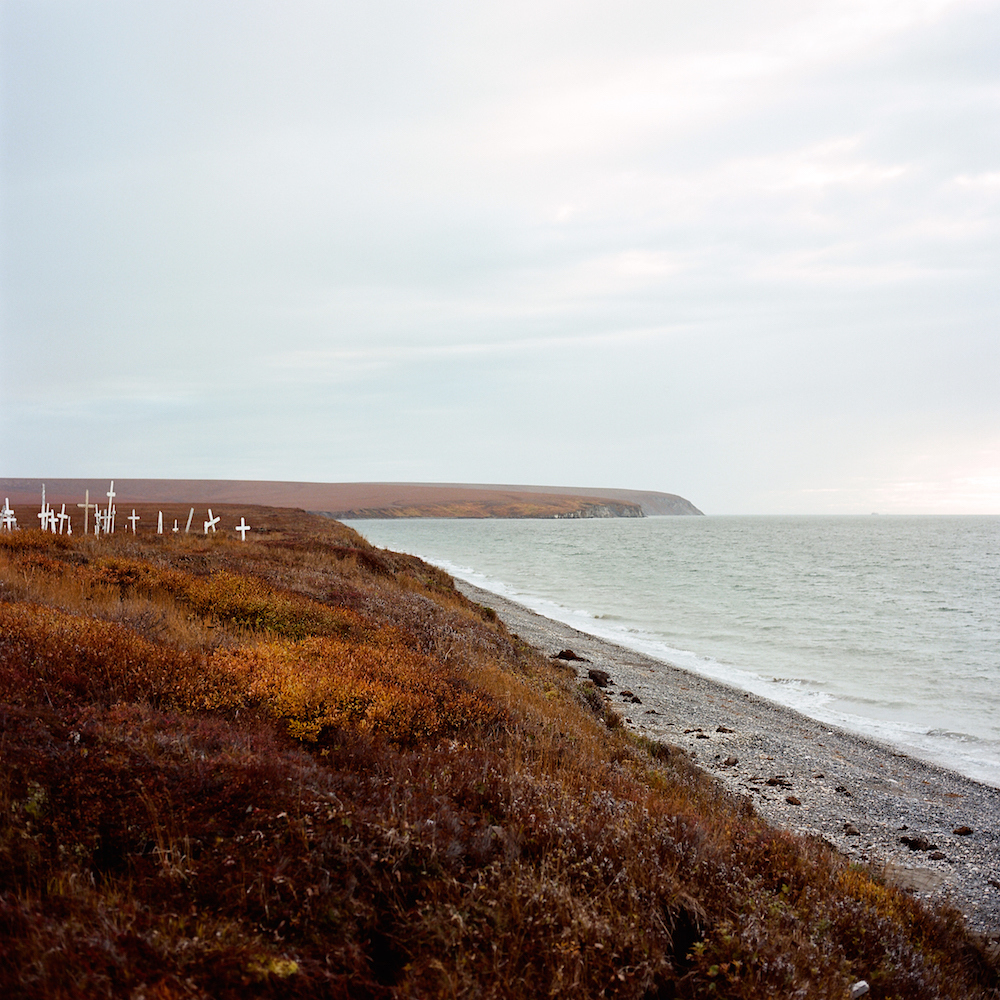 I AM INUIT is a project that seeks to connect the world with Alaskan Inuit (Inupiat, Yup’ik, Cup’ik and St. Lawrence Island Yupik) and the Arctic, through common humanity. In 2015, Brian Adams and The Inuit Circumpolar Council Alaska teamed up to visit 20 Inuit villages in Alaska resulting in the book I AM INUIT (Benteli) and an international traveling exhibition with the Anchorage Museum.

The Inuit culture encompasses an immense stretch of the earth, from eastern Siberia to Alaska, across the top of Canada and into Greenland. Spread through the Arctic and subarctic, it has existed for centuries. Yet despite being the majority population in the northern reaches of several of the world’s most powerful nations, the Inuit remain largely out of the public eye. Creating awareness and building an understanding of their history and culture was the objective of Anchorage-based Inupiaq photographer Brian Adams.

This work brings viewers face-to-face with Alaska Natives who connect traditional cultures to the modern world, as they exist and maintain their identity even as outside pressures and the local impacts of climate change create challenges for them daily. This work offers a deeply human insight and a unique view of hope that the ways of the past can be successfully survive amidst the surge of globalizing.

For I AM INUIT Adams crisscrosses the state, bringing faces and voices to over a dozen Inuit communities, and illustrates the wide diversity found there. Many villages are inland, and subsistence is based on hunting and on salmon fishing along rivers, rather than on harvesting sea mammals.

Much of the focus in this work is on survival, as this is the foundation for all Native cultures in Alaska. Hunting, fishing, gathering, and the foods and artisan crafts created from the sources supplied by the land are portrayed in a way that confirms that Inuit culture will persist. Above everything else this is the message that I am Inuit proclaims to the world.

Brian Adams was nominated for this year’s celebration of Indigenous artists by Kiliii Yiyan (IG:@@kiliiyiyan) 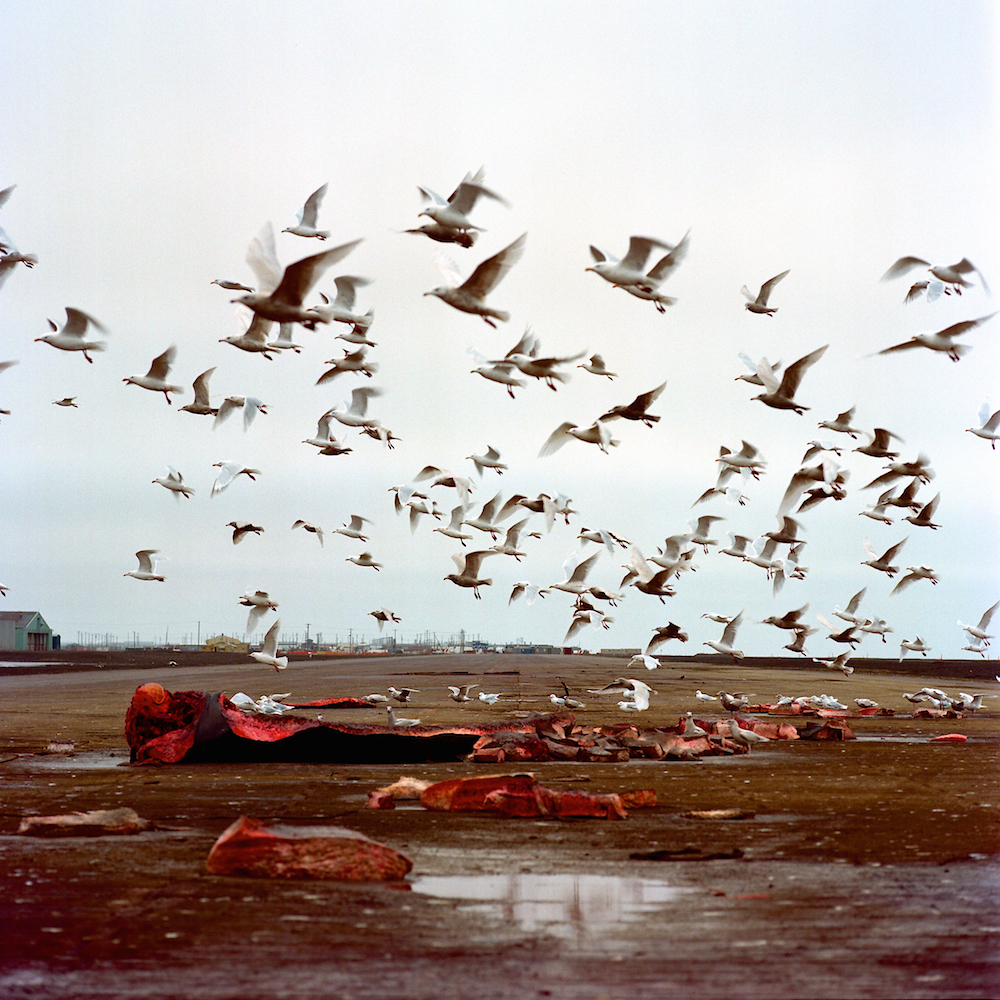 Brian Adams (b.1985 Inupiaq) is an editorial and commercial photographer based in Anchorage, Alaska specializing in environmental portraiture. His work has been featured in both national and international publications, and his work documenting Alaskan Native villages has been showcased in galleries across the United States and Europe. His first book of photography, I AM ALASKAN, was published in October 2013 by University Of Alaska Press. His most recent book, I AM INUIT was published in December 2017 by Benteli. In 2018, he received a fellowship grant from The Native Arts and Cultures Foundation and the Rasmuson Foundation to continue his work on documenting Inuit life in Alaska and the circumpolar. 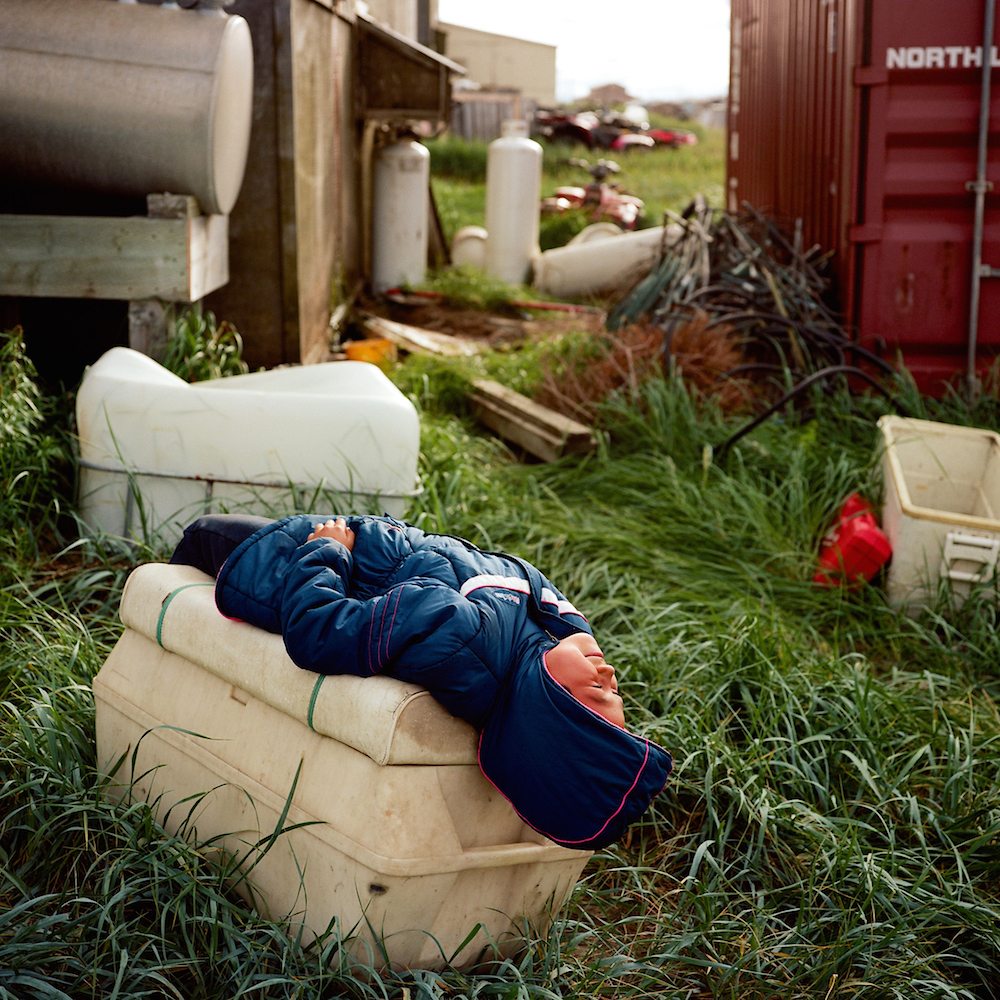 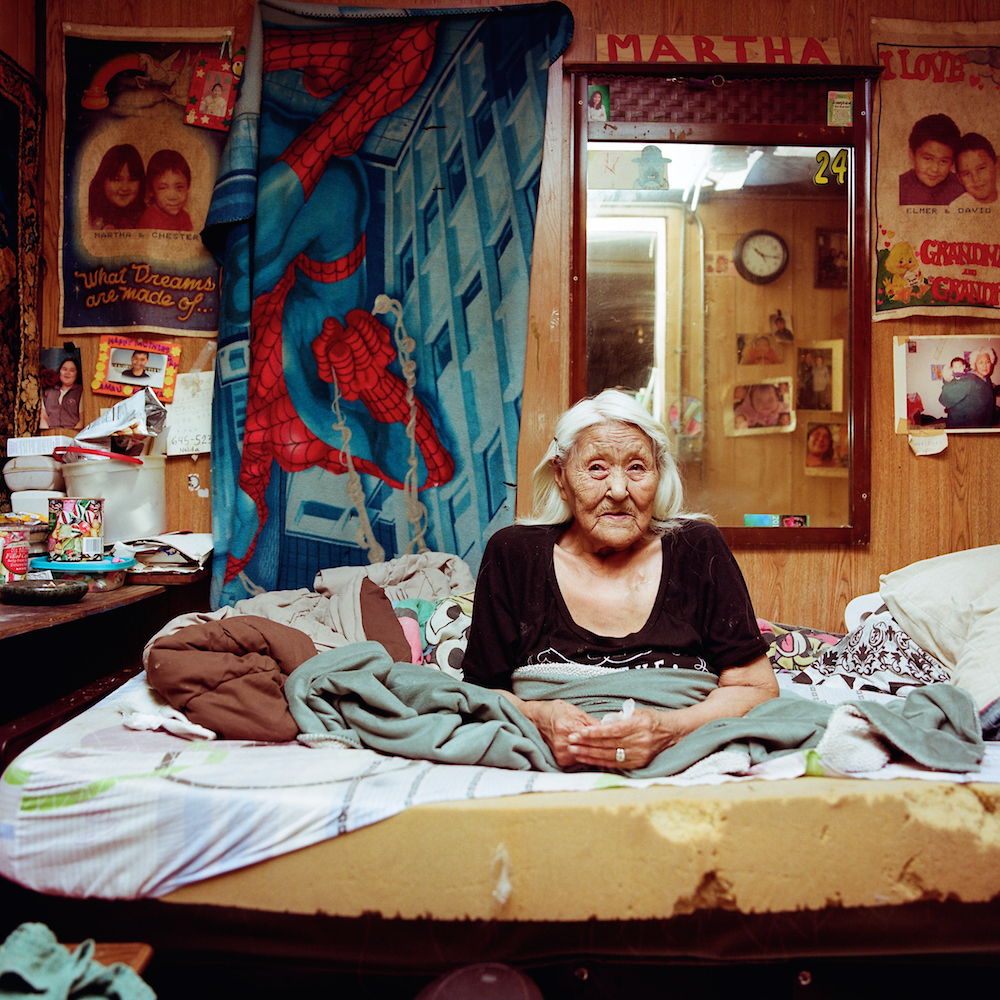 © Brian Adams, I am originally from Kotzebu, Alaska. I married a man from Noatak, Alaska. That’s what brought me here. I had 13 kids and one adopted. My brother arranged my marriage even though I was going with someone at the time. I have been in Noatak since 1948. I like Noatak. We would go hunting just across from Kotzebue, every summer we would go down there to hunt ugruk [bearded seal] and stuff for our food. That’s how we live, we go around the world. I like to go berry picking. I like to do things, but I can’t do anything anymore, but my boys are taking good care of me. I am 85 years old, some people can’t believe it! I can still understand English and Eskimo. That’s how I was raised. My dad was a pastor in Noatak and Kivalina, Alaska. We would travel to Kivalina with a dog team. That was the good life. I love the outdoors. Martha Burns is Inupiaq and lives in Noatak, Alaska. Marriage, in traditional Inuit culture, was a necessity and not a choice. Often times, marriages were arranged at birth to ensure the survival of the family, because every individual had to rely on a partner to survive. 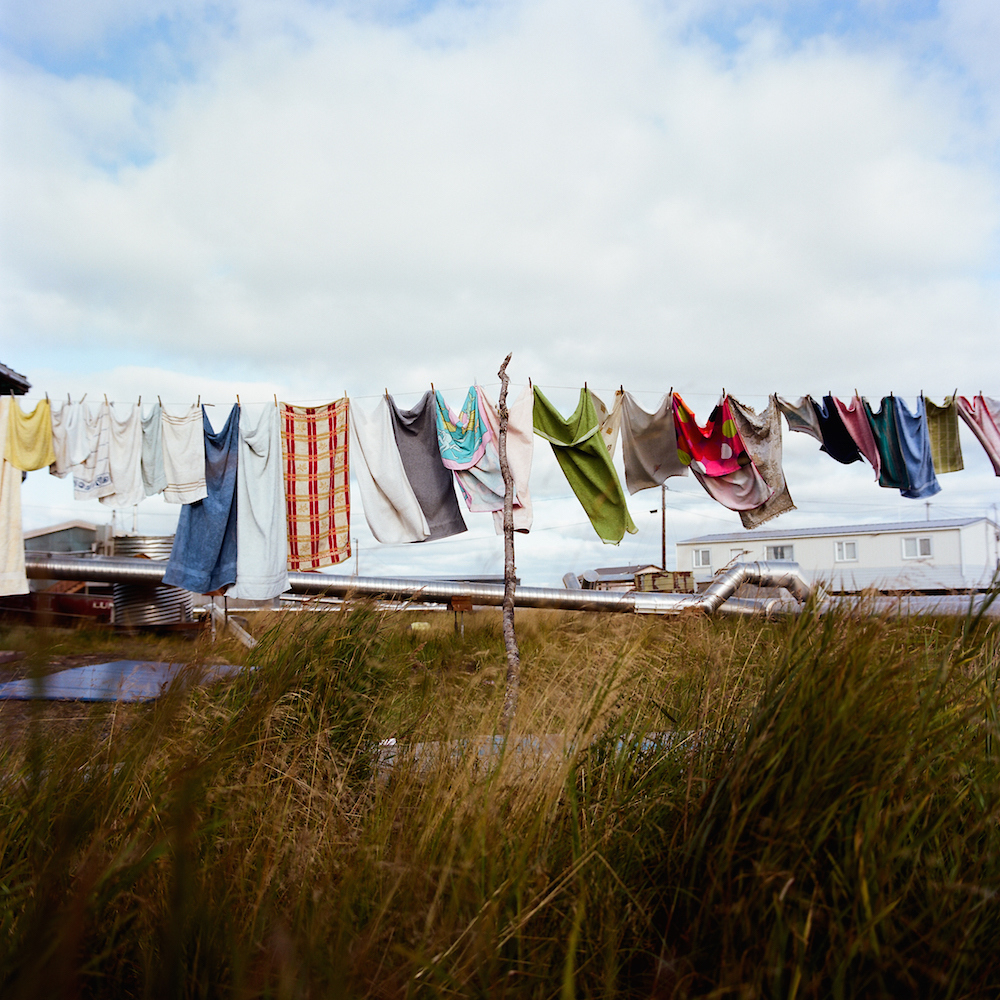 © Brian Adams, The Central Yupik name for Quinhagak is Kuinerraaq, meaning the ìnew river channelî. For most of the 700 people who reside in this village, Yupik is their first language and they often practice food security as their livelihood. Many members of the community utilize the resources Quinhagak has to offer such as salmon and trount fishing, bird, caribou, and moose hunting, and berry and plant picking. — Quinhagak, 2015. 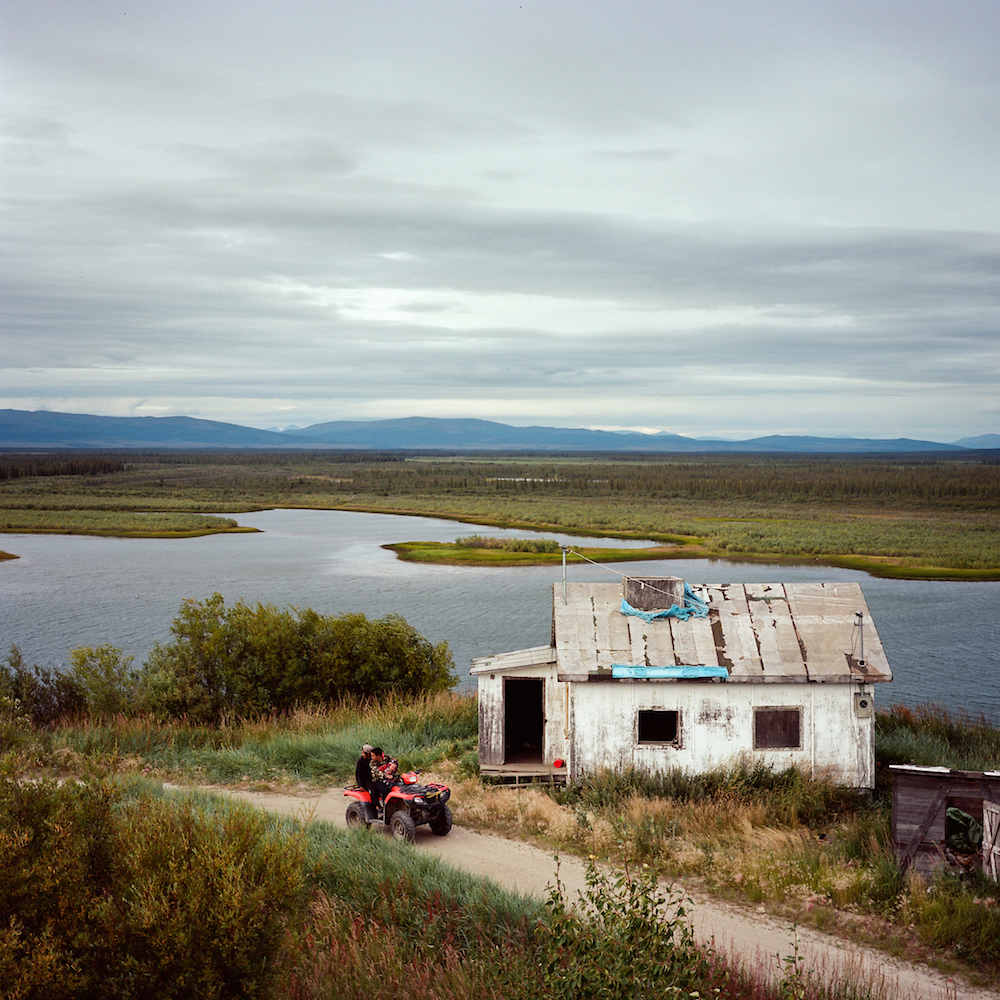 © Brian Adams, Overlooking the old townsite of Noorvik and the Nazuruk Channel of the Kobuk River. Noorvik, Alaska. 2016. 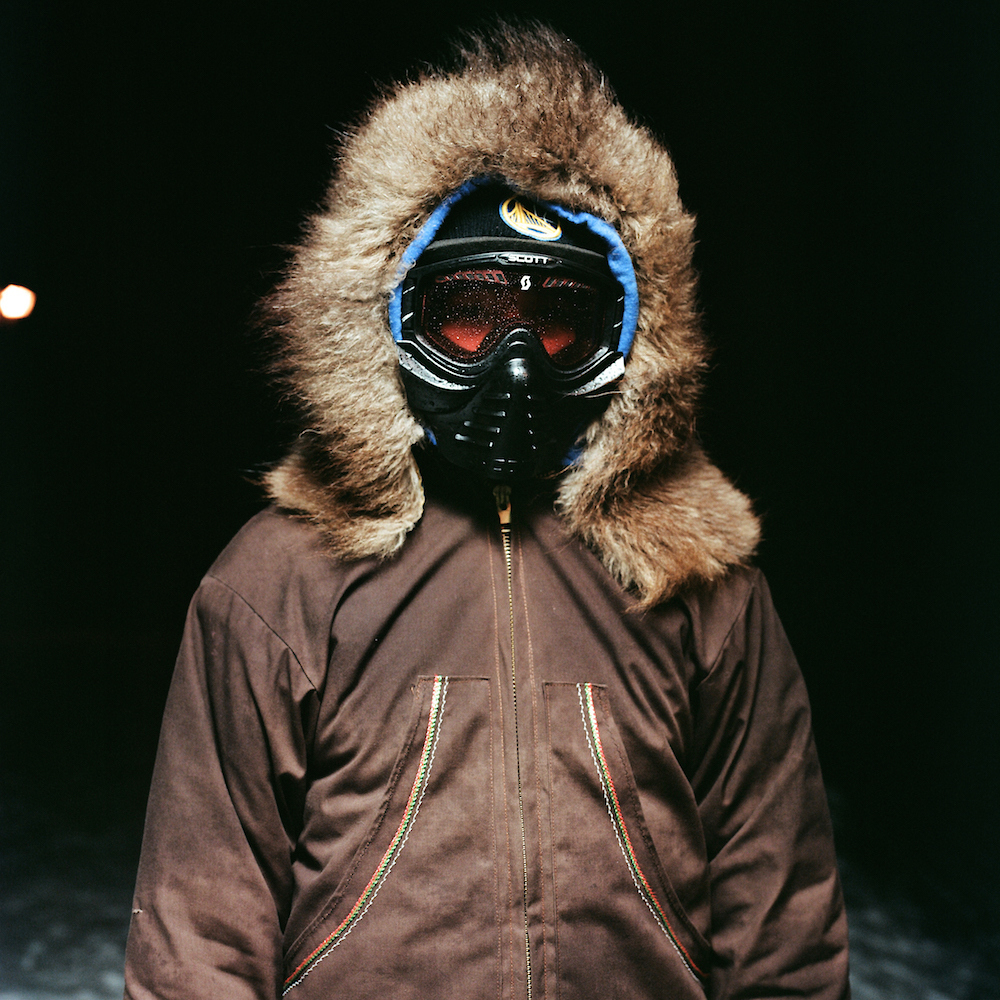 © Brian Adams, “I just gave my Aana Viola Norton a ride home from the gym.” —Peter Norton is Inupiaq from Noatak, Alaska. While there are a number of cars and trucks in rural Alaskan villages, like Noatak, the main mode of winter transportation in the communities is via snow machine, even in subzero Arctic temperatures. 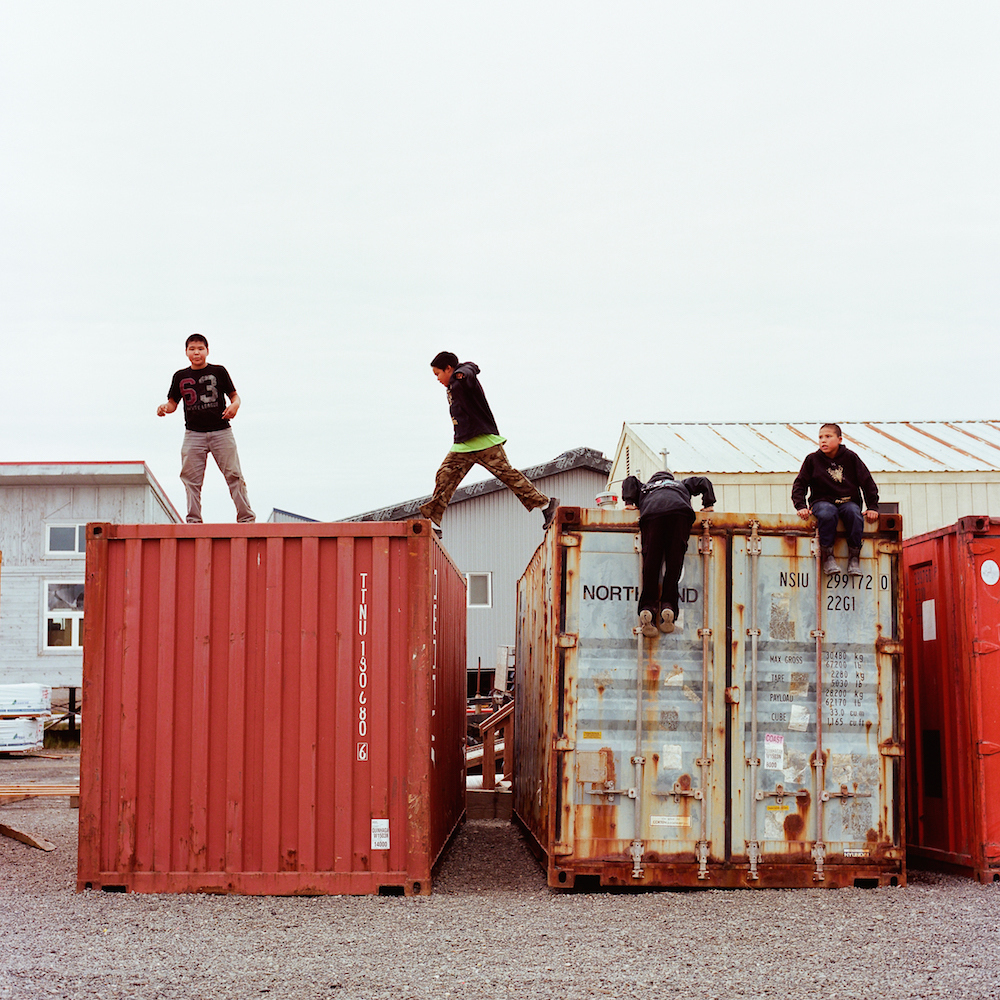 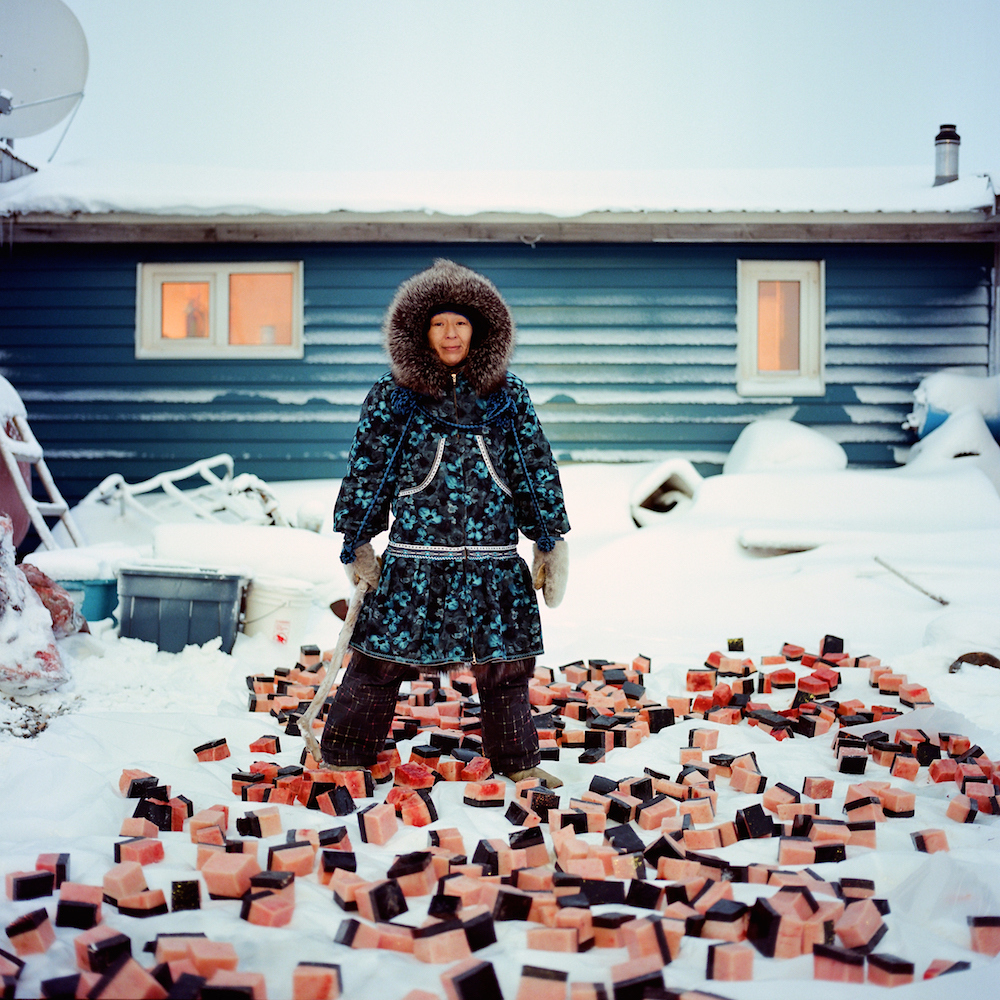 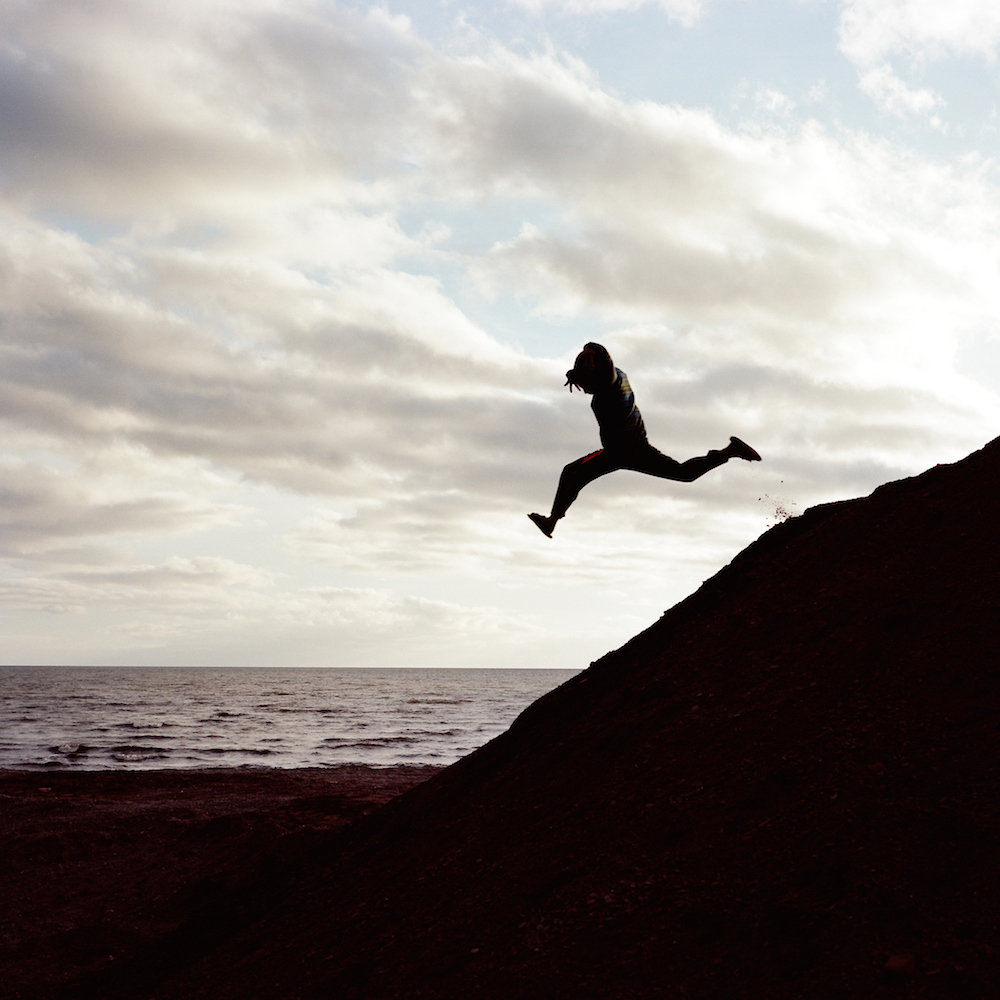 © Brian Adams, A child playing on a gravel berm on the coast near Shaktoolik, Alaska. 2016. 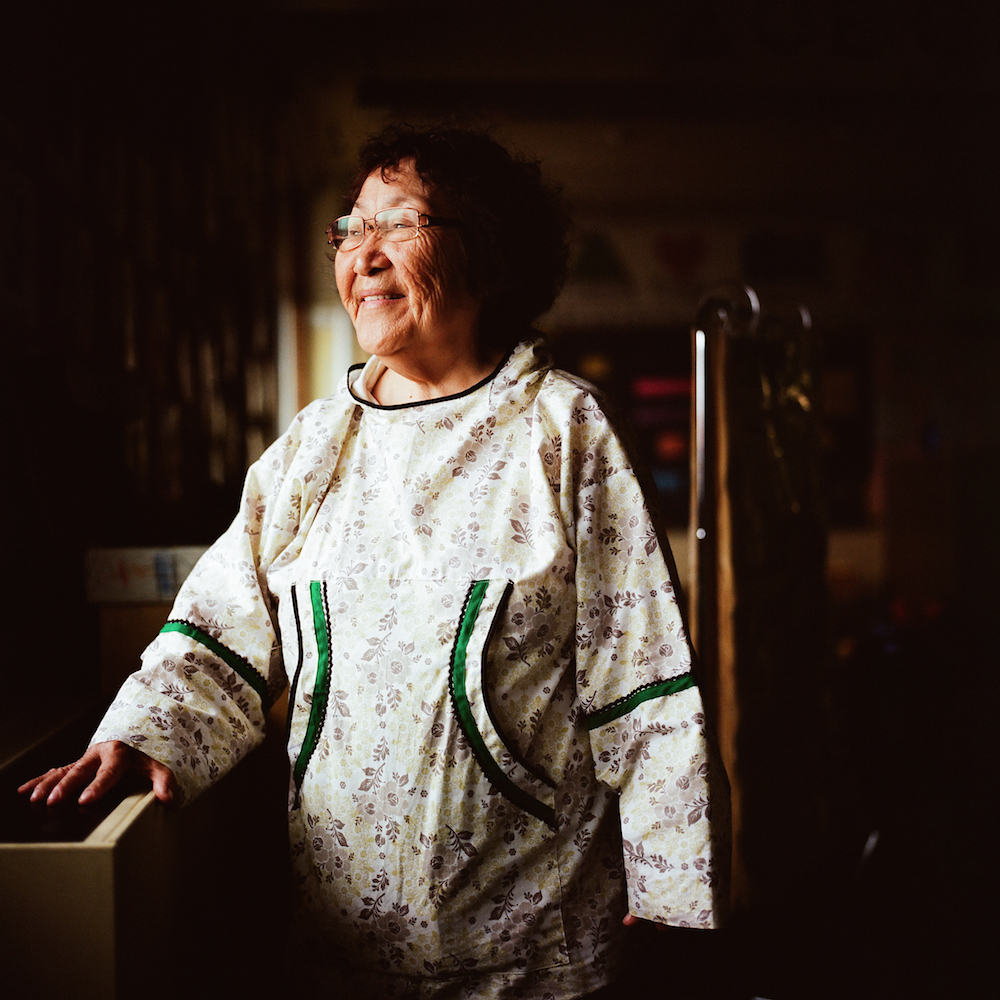 © Brian Adams, “My name is Ayaprun, one of 13 Yupíik names. My baptismal name is Ludwina, but then during high school, they started calling me Lottie, so I started being known as Lottie Jones, originally from Scammon Bay, Alaska. Iím one of nine sisters and a brother, which includes two adopted brothers and an adopted sister, so 13 in the family. I was the first to graduate from high school, then the first to graduate from collegeóin fact, in the whole village. I went to college on campus at UAF, got my degree in 1972, and I have been teaching here ever since. From 1972-90 it was kindergarten English. From 1992-95 I taught YSLóthatís Yupíik as a second language. [My mother’s] biggest peeve was ìI need to get a translator to talk to my own grandchildren, my great grandchildren.î She didnít like that. Thinking about that made me want to work harder to change that. It seems like the bigger our school becomes, the harder we must work to make the Yupíik language really productive. When we were in the small building, kids didnít hear any English because we were in a closed environment. Now we need to really work on having them speak more Yupíik. Listen to what those kids are speaking out there in the hallóEnglish. I dream in Yupíik. You can be a real Yupíik even if you donít speak your language, because what if the opportunity to speak it wasnít there? But yet you live your subsistence lifestyleóthatís Yupíik. But to make that element whole, you need the language, the lifestyle, and the culture. Never think you are not Yupíik because you canít speak the language. You might think Iím a fluent speaker, but when I was with my mother, I was always asking, ‘What does that mean?'”.–Ludwina Jones, Yupíik Language Immersion Teacher at the Ayaprun Elitnaurvik School in Bethel, Alaska. The mission of the school ìis to help strengthen Yup’ik language and culture, to promote understanding of cultural differences, to enhance one’s own. 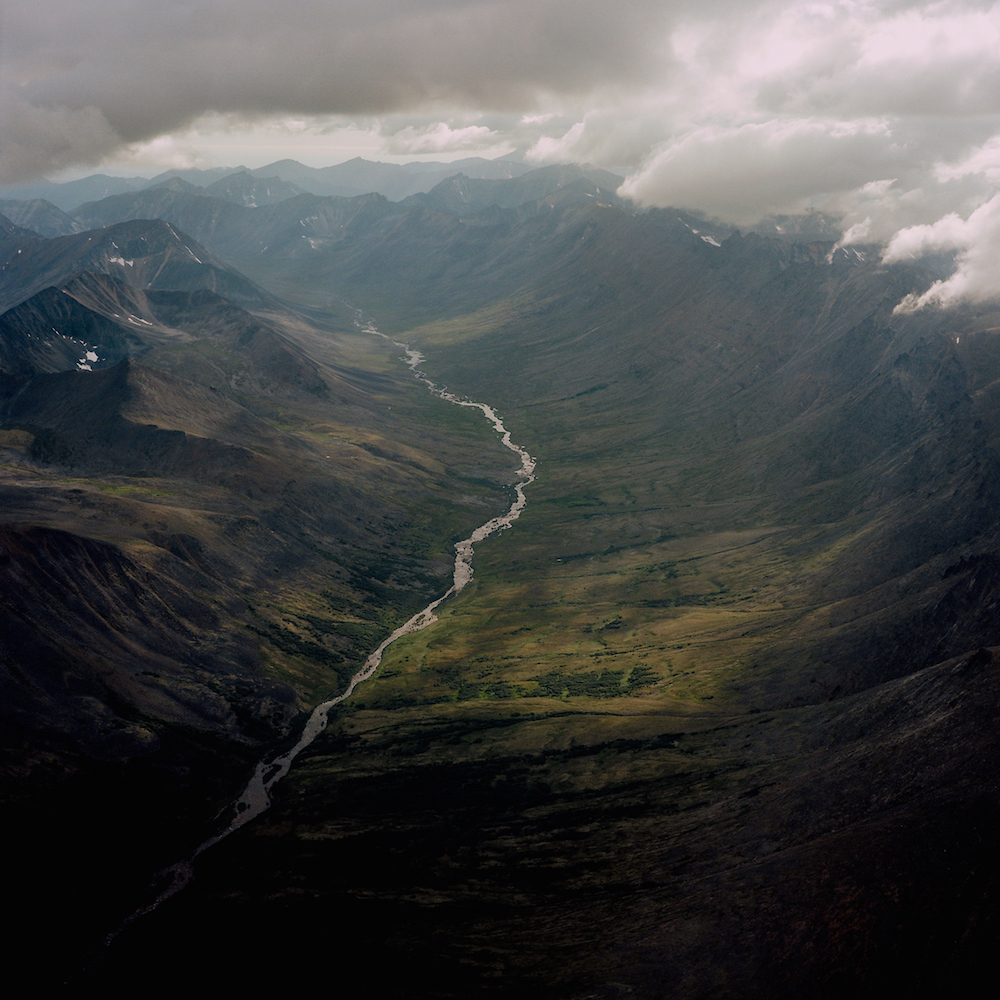 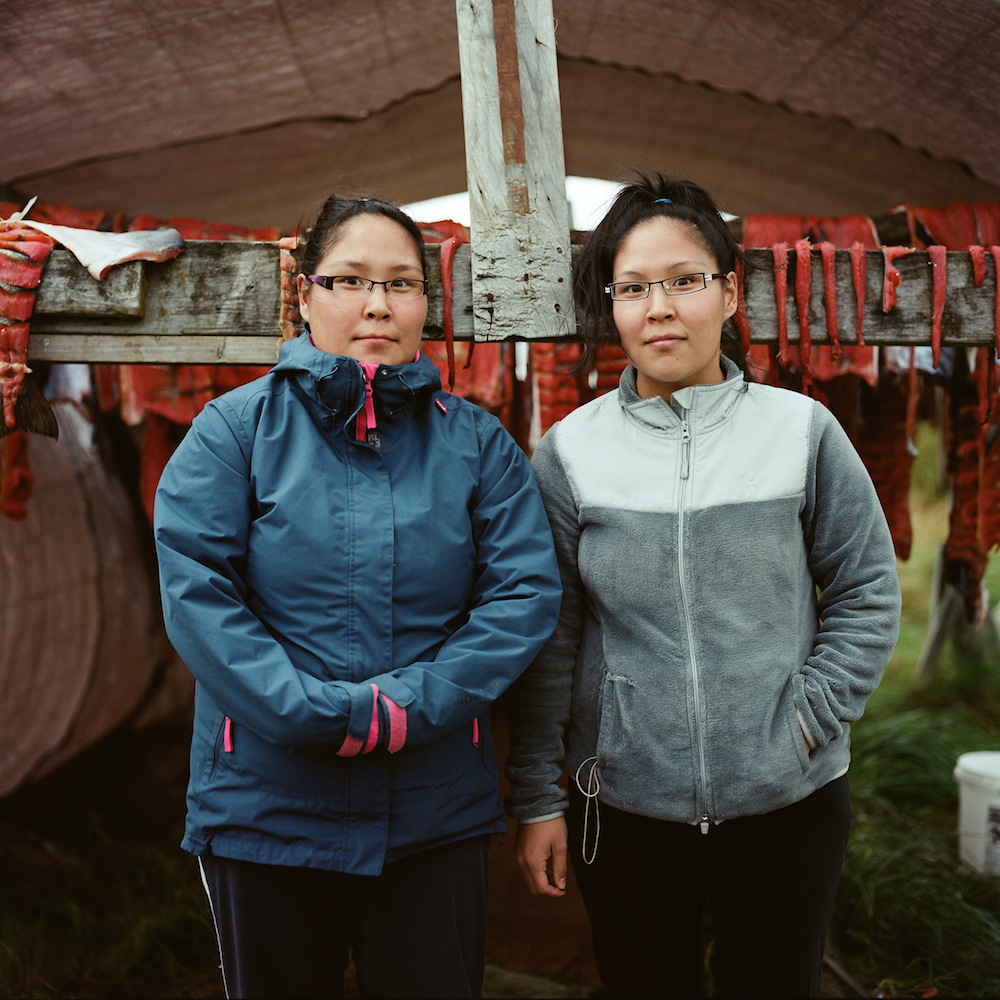 © Brian Adams, ìAfter cutting the silvers, we put them in salt water and then dry them for three or four days. After drying them, we smoke them and then they will be done. It takes about two weeks from catching them to eating them. Itís a passed down recipe.î óBrittany Cleveland & Taryn Andrew are standing in front of traditional Yupíik fish rack full of silver salmon drying after a successful fishing season in Quinhagak, Alaska. Salmon is an important traditional food resource, not only for nutritional reasons, but culturally and spiritually for Inuit. The Yupíik word ìNeqaî means fish and also translates literally to food. 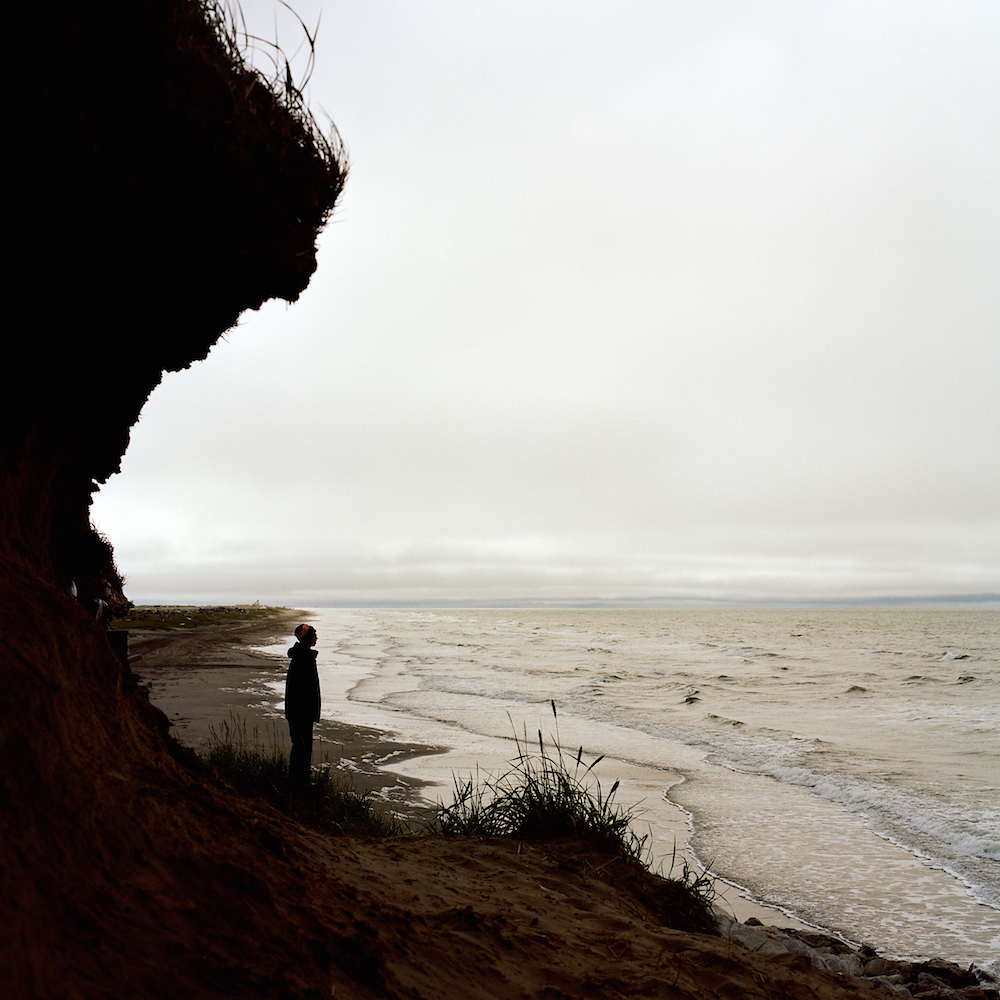 © Brian Adams, ìI will be 18 tomorrow, and every year I see the land slowly decreasing. People call it climate change; others call it big bologna. In real life, if they actually came up here and lived with us for a few years, they would see what we are talking about and what we are going through, year by year. Berries and animals are coming quicker than usual. It’s a big change for us. Prices have even gone up in town. I am not even that old you know? Things have changed in a short amount of time.î ó Lynden Weyiouanna is Inupiaq and lives in Shishmaref, Alaska. 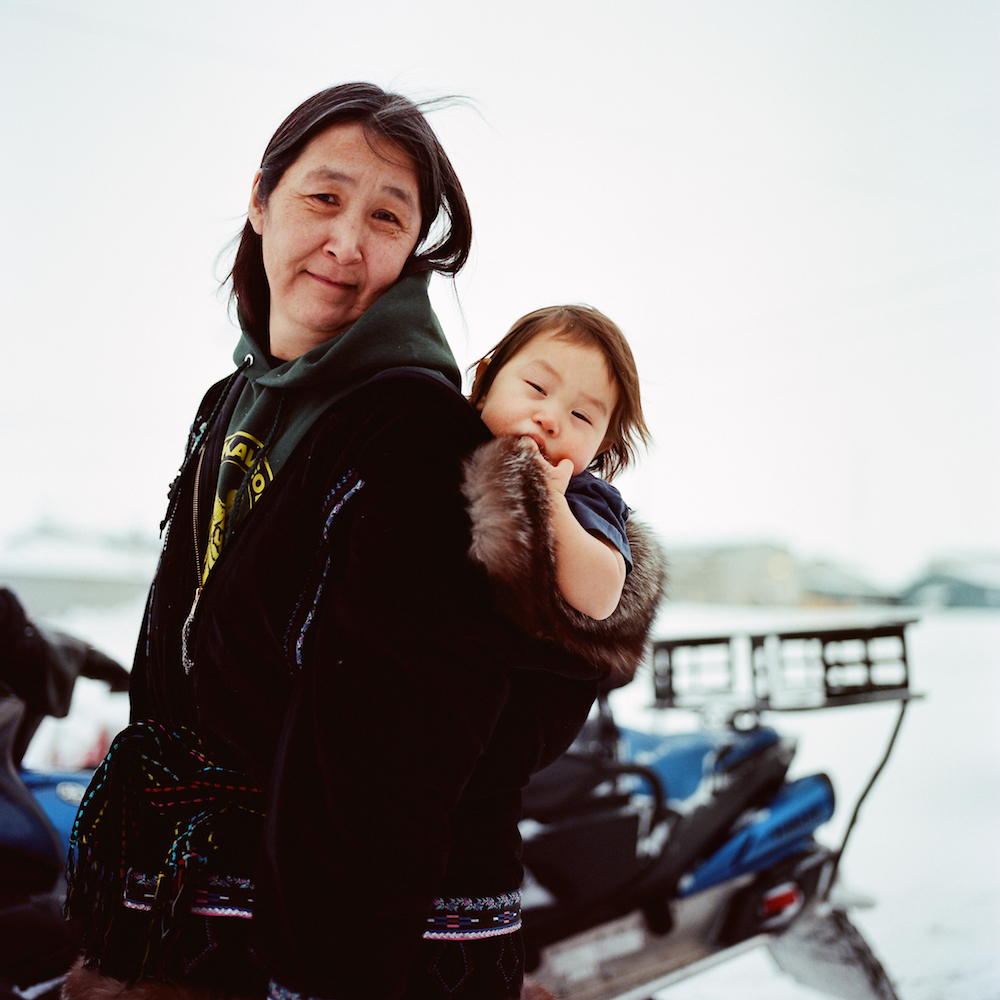 © Brian Adams, ìI lost my twin sister in 1988. My daughter in there [inside the house] is named after her. Her name is Lucy.î ó Linda Soplu is ìamaq-ingî (Inupiaq for packing) her Grandson George Soplu. Both are Inupiaq from Kaktovik, Alaska. Both Inupiat and Yupíik have traditionally named newborn babies after people who have recently passed away. It is believed that those who have been named after those who have passed on take on characteristics of their namesake. 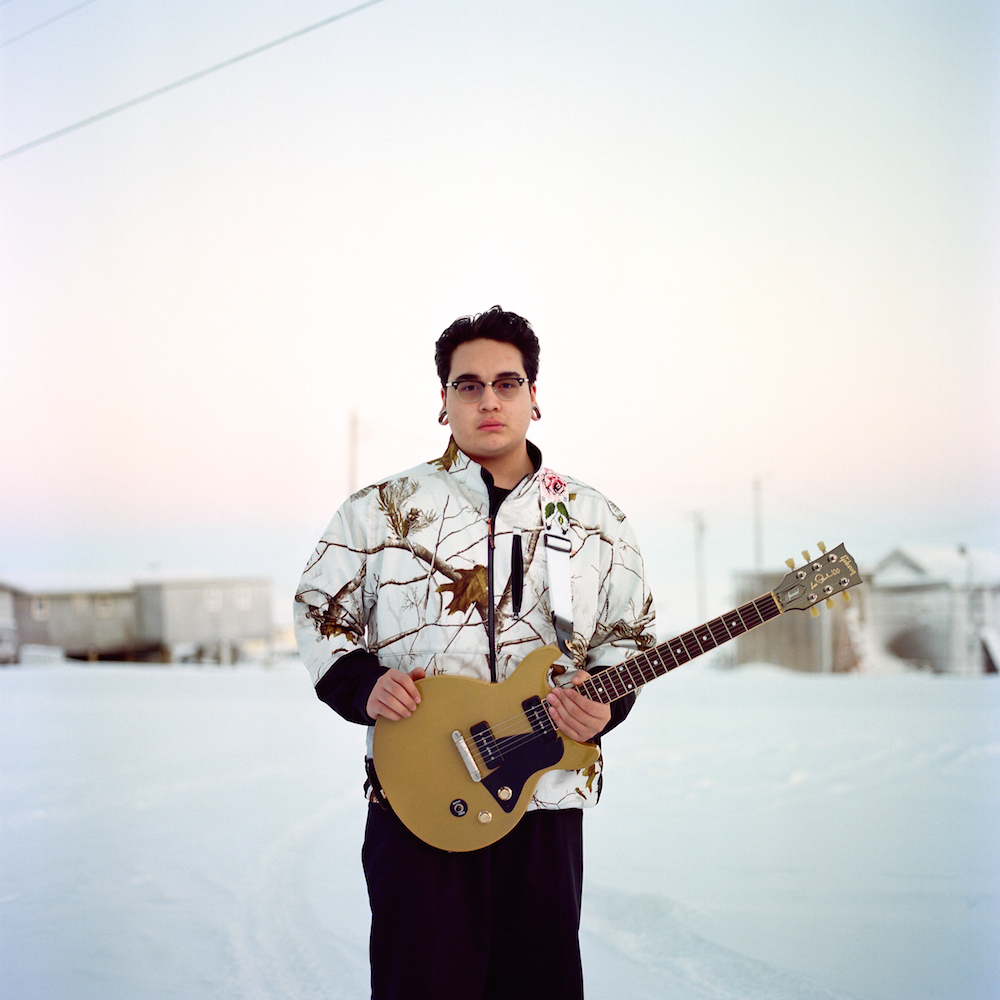 © Brian Adams, I started getting into music 8 years ago. I started playing guitar 6 years ago. A few chords and learning from my uncles and cousins. I started singing four or five years ago. I used to watch my uncles playing and wanted to start playing. My cousins were listening to all kinds of rock and roll and I would watch all kinds of music videos and see Slash playing. My favorite right now is ACDC. I am really into old 50s rock and roll, and old country like Hank Williams and Johnny Cash. I want to try and go to Florida for music, there is a school there called Full Sail. I want to go check it out. Jonas Mackenzie is Inupiaq from Kaktovik, Alaska.