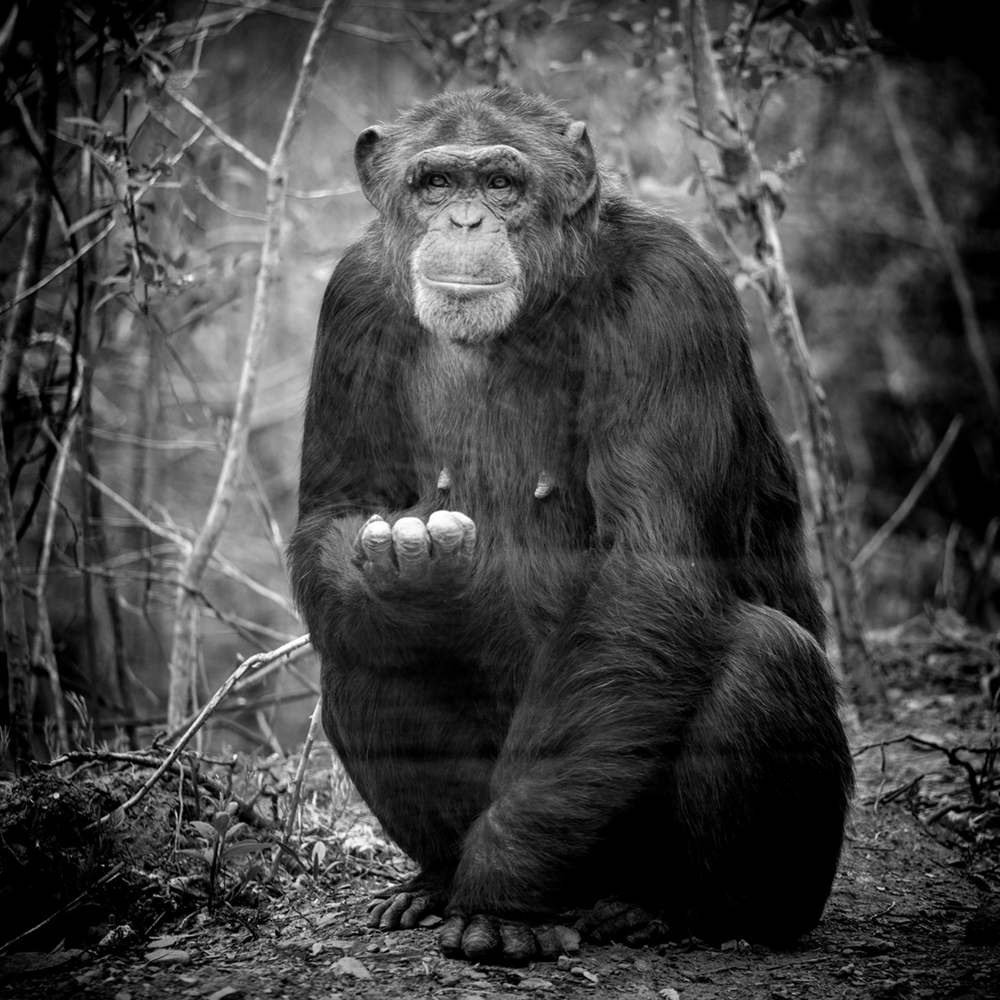 Anne Berry has just released her poignant new monograph, Behind Glass that speaks to animals in captivity, in particular, primates. This long term project is not only beautifully considered, but important in it’s subject matter. One of these photographs hangs on the wall outside my office and I am always moved by the sadness of animals behind glass but drawn in by the beauty of the presentation. An interview with the artist follows.

Behind Glass is a collection of photographs made in monkey houses of small zoos throughout Europe, thoughtfully constructed from exquisite archival materials. Anne Berry is recognized for her ability to create lyrical, intimate portraits of animals, and her photographs demonstrate a perception for capturing the animals’ emotional states and intense facial expressions. They reveal an undeniable communication between herself and the primates she visits and her adept ability to capture this connection. Berry’s powerful and moving photographs gently confront the viewer to facilitate a reexamination of the human, and often personal, relationship with the animal kingdom.

The book will be released in a hardbound edition of 472 copies. The embossed suede cover has a tipped in image on front and back. The binding is Smyth sewn, 112 pages with 50 duotone plates. The book includes a statement by Jane Goodall and essays by Jerry Cullum and primatologist Jo Setchell. Behind Glass, Hardcover 9”x9,” edition of 472, $65.00,  25 Special Editions with 2 hand-pulled photogravures in hand-bound folder, $350

Please go to anneberry.bigcartel.com to purchase. 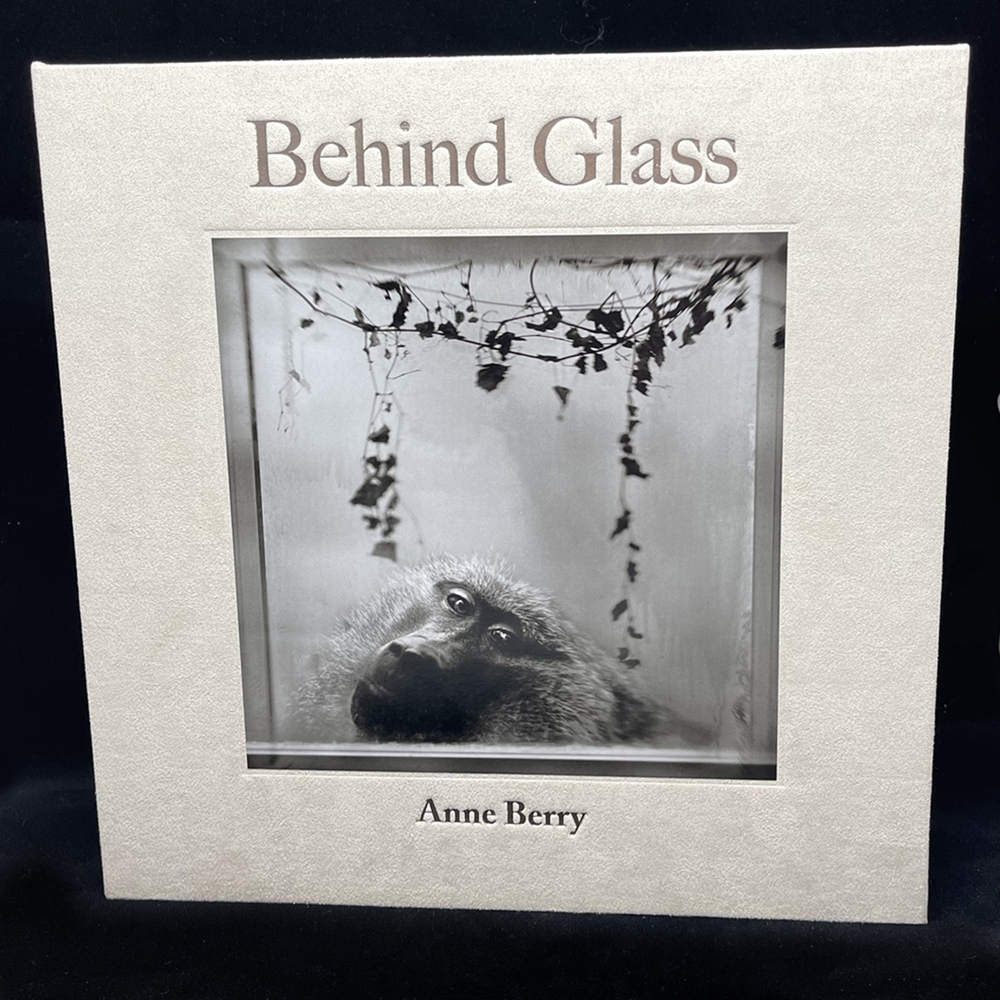 Anne Berry is an artist from Atlanta, Georgia. Her photographs investigate the animal world, the domain of childhood, and the terrain of the Southern wilderness. She also explores themes and metaphors from literature.  In 2013 and 2014 Critical Mass included her work in their Top 50 Portfolios. Anne has exhibited nationally and internationally, including The Fox Talbot Museum in Lacock, England, SCAN Tarragona in Spain, The Museum of Photographic Arts in San Diego, and the Ogden Museum of Southern Arts in New Orleans. Books include Through Glass (North Light Press, 2014) Primates (21st Editions, 2017), and Behind Glass,  2021. Anne’s work is featured in National Geographic Proof, Feature Shoot, Hufffington Post, and Lens Culture, among others. Her work is in many permanent collections, including the National Gallery of Art. Anne lives in Newnan, GA and is represented by the Catherine Couturier Gallery in Houston. 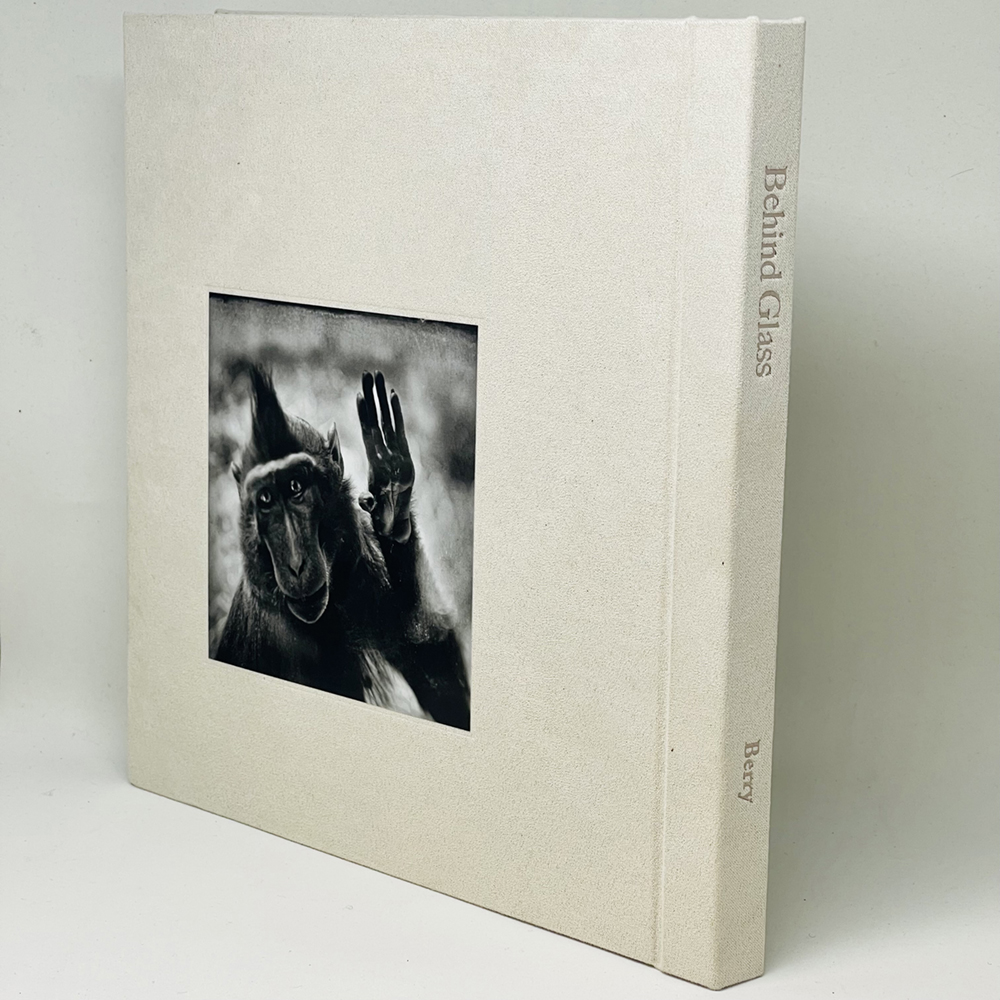 ©Anne Berry, Behind Glass back cover

Berry has 25 Special Editions with 2 hand-pulled photogravures in hand-bound folder, offered at $350. To purchase, go HERE. 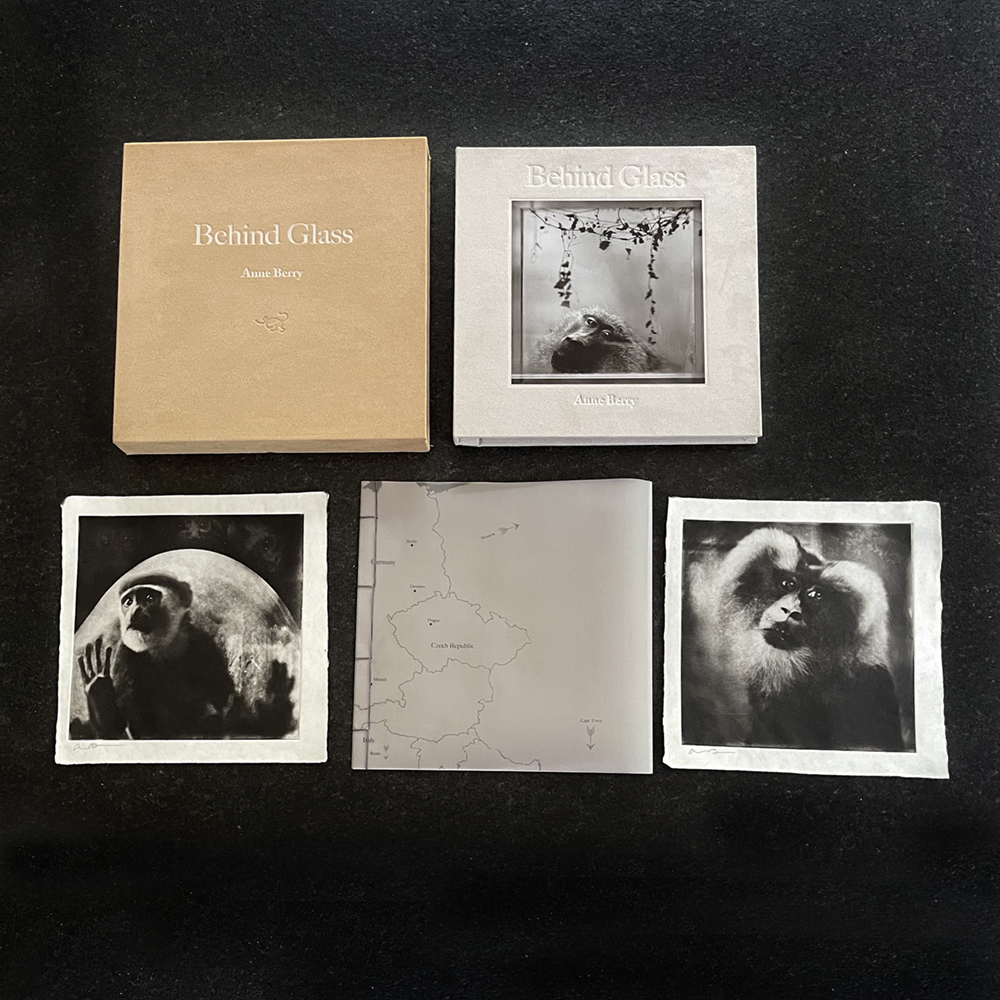 Anne Berry’s photographs are poignant and deeply disturbing.  Each one speaks to the loneliness, the depressed  spirit and the despair of the incarcerated individual.  Try to imagine  the passage of the hours, days, weeks, months and years, trapped in a life that has no meaning  and leads to nothing but death.  Knowing full well that these are sentient, highly intelligent and emotional beings highlights the shocking level of our inhumane attitude to animals.  Together we should demand an end to exploitation of this sort. – Jane Goodall, PhD, DBE. UN Messenger of Peace and Founder  of The Jane Goodall Institute.

I’m grateful to Jane Goodall for writing this reaction to my photographs and for all she does for the welfare of chimpanzees. These words bring to mind an image of Willie B, the Western Lowland Gorilla who lived in the Atlanta zoo throughout my childhood. Stolen from Africa, living alone in a room of blue ceramic tile, he did not go outdoors for 27 years. But he inspired and still inspires empathy for his species. Today the gorillas at the Atlanta zoo have a much larger, more enriched environment, and the zoo supports the existence of gorillas in the wild. Young  visitors to the zoo bond with animals and some will be inspired to do important things for animals and the world, as was Alan Rabinowitz, co-founder of the Panthera wild cat conservation organization,  by his childhood visits to the cats in the Bronx Zoo.

Since 2010 I have been traveling throughout Europe photographing primates in small zoos. Alone, patient and silent, in these monkey houses I have the opportunity to establish a more than passing connection with these animals. I make portraits that reveal their unique personalities; it is clear that they are posing for my camera and that there exists a human-primate bond. My goal is not to comment on the condition of the zoos I visit but to make portraits that inspire empathy. To borrow a metaphor from Wassily Kandinsky, if the soul of the viewer is the piano with many strings, I want my photographs to become the hand that touches the keys, creating vibrations in the soul, causing the reaction described by 21st Editions editor Collier Brown in his Forward to Primates:

But the fact that Berry photographs apes and monkeys explains very little about that tug you feel deep down in the cardiac region of your chest as you look each of these beautiful primates in the eyes. An encounter with any of Berry’s portraits is enough to leave a person speechless for many minutes at a time. A part of the mind just goes blank. But how to describe that blankness? Not empty, not void. More like open, receptive, ready to take dictation. (Anne Berry. Primates. 21st Editions. 2017)

I hope people will listen to the voices of these primates, and that they will consider the welfare of all primates, living in desecrated and threatened habitats, in sanctuaries, or in zoos, and be moved to action. There is always something we can do to make things better. 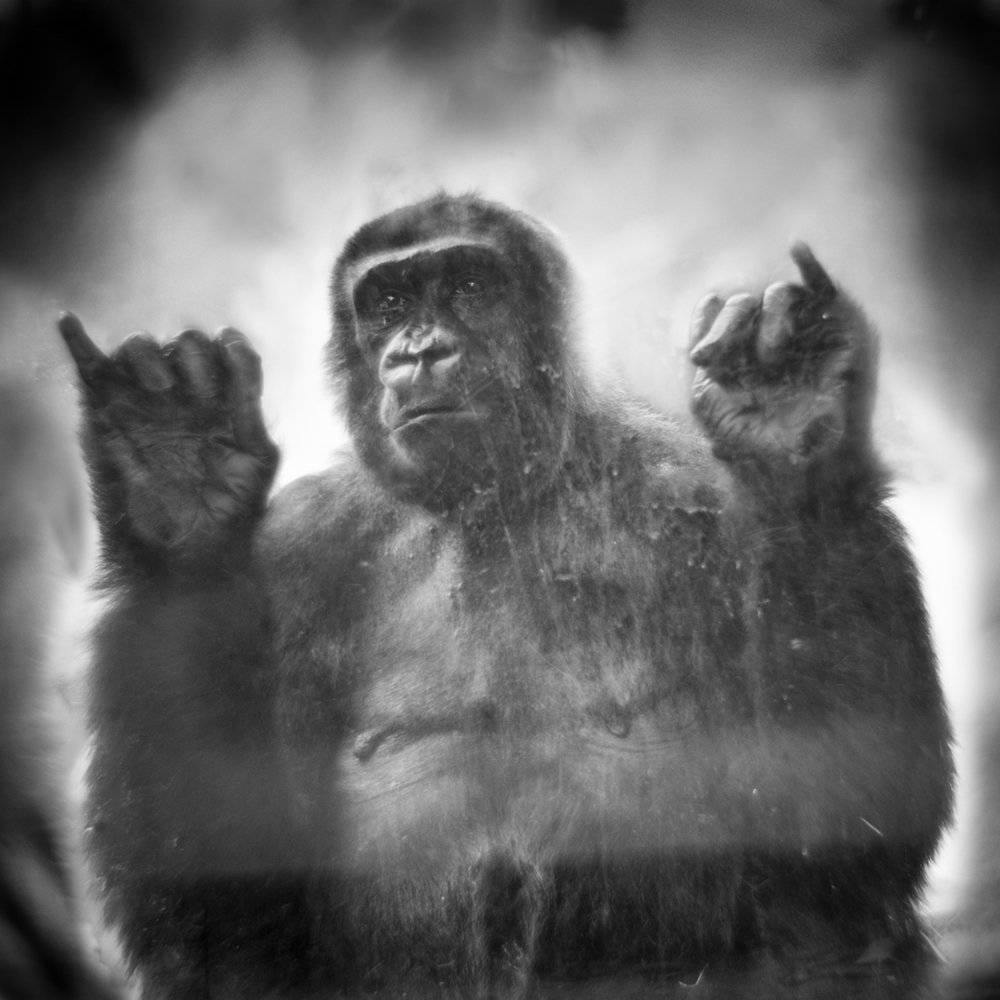 Congratulations on the book! Before we dive into that, can you share the landscape of your earlier years and how you found your way to photography.

I learned the craft of photography in college, while earning a BA and MA in English. Literature has remained an important influence on the way I look at life and consequently on the things I choose to photograph and also how I present them. Around 2010 I had the time to invest in exploring photography as my art medium.  I rediscovered techniques and learned new ones. At this time I also began to travel internationally, tagging along on my husband’s business trips, searching for a photographic subject that excited me. 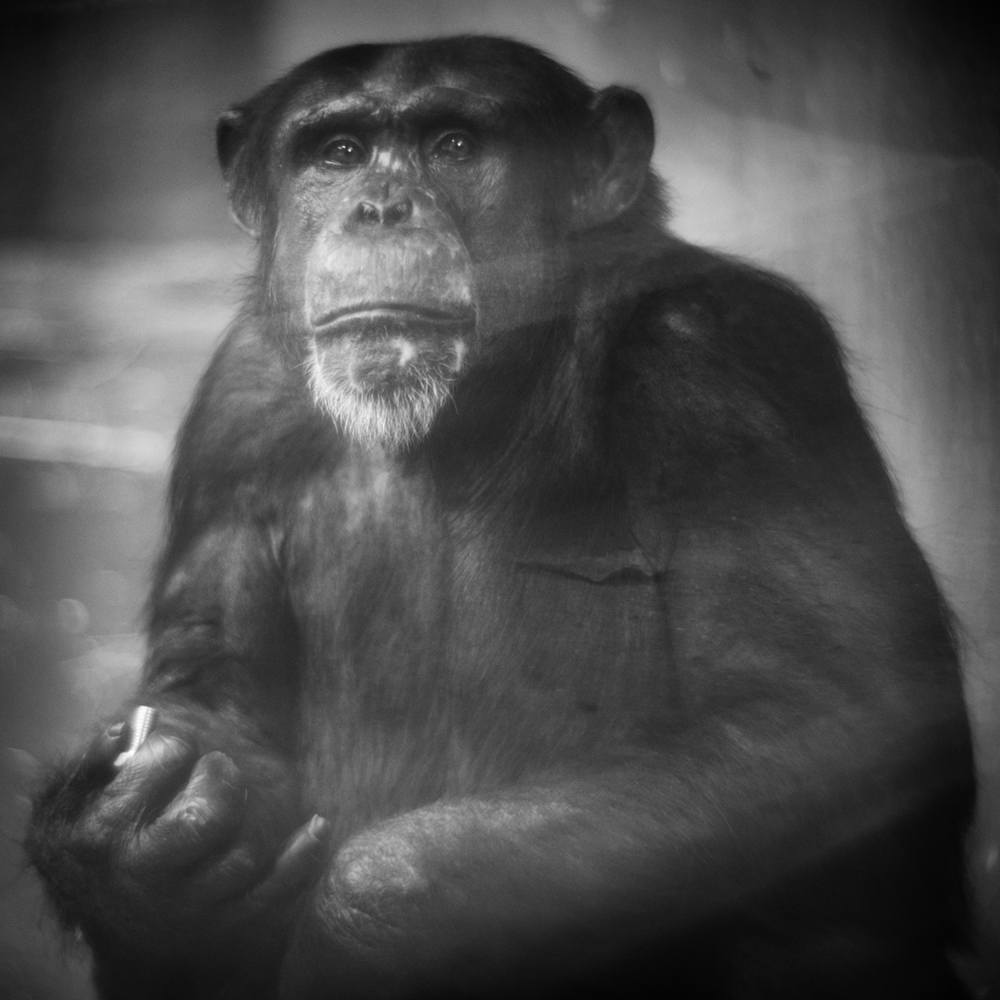 ©Anne Berry, Charly with his screw

How did this project get started?

In 2009 I found myself wandering alone in the Ménagerie Zoo in Jardin des Plantes. The interaction I had with the Orangutan, Nénette, and two Mangabeys changed my artistic life. I started to seek out zoos with the intention of visiting the primates. I’ve visited zoos in Germany, France, England, Spain, Italy, Russia, The Czech Republic, The Netherlands, Belgium, South Africa, India, and Brazil. When I go to a zoo I am always alone and usually do not speak the language. This separation from the people around me perhaps prepares me to make a silent connection with the primates. 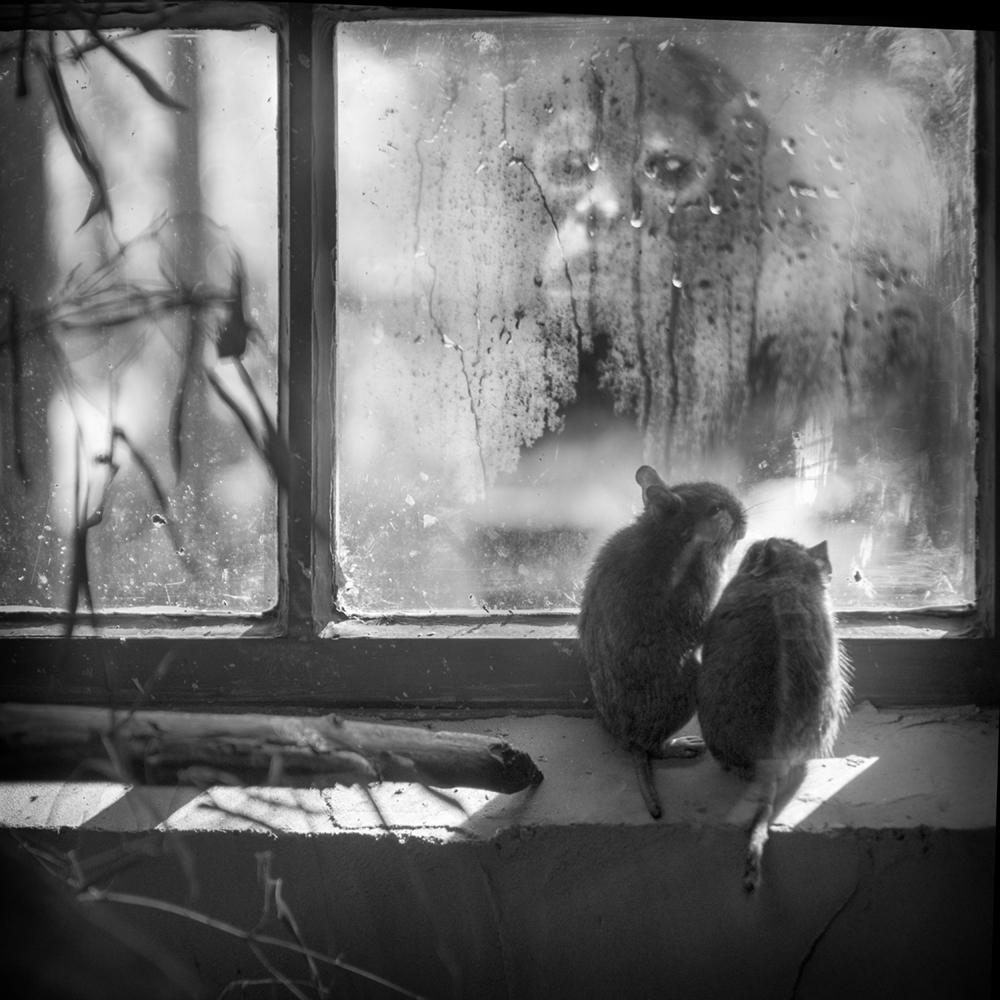 I can’t imagine the sadness you must have felt making this work–how were you able to be artistic while holding that emotion?

My true sadness comes from seeing how stressed these animals are in their natural habitats because humans put economic interest  before the care of endangered species and the environment. When I see animals in captivity I choose to focus on my interaction with the primates I visit, knowing that interaction with people enriches their lives. These experiences  make me feel a deep connection with these creatures, and I have been part of or witnessed undeniable human – primate bonding. My intention is not to document a certain zoo but to ask the viewer to fall in love with the subjects of my portraits and to become interested in the welfare of these species in the world. I believe that art adds an essential note to the voice of science and activism by resonating on an emotional level. Art inspires empathy, which leads to awareness of the facts and motivation to help make things better. 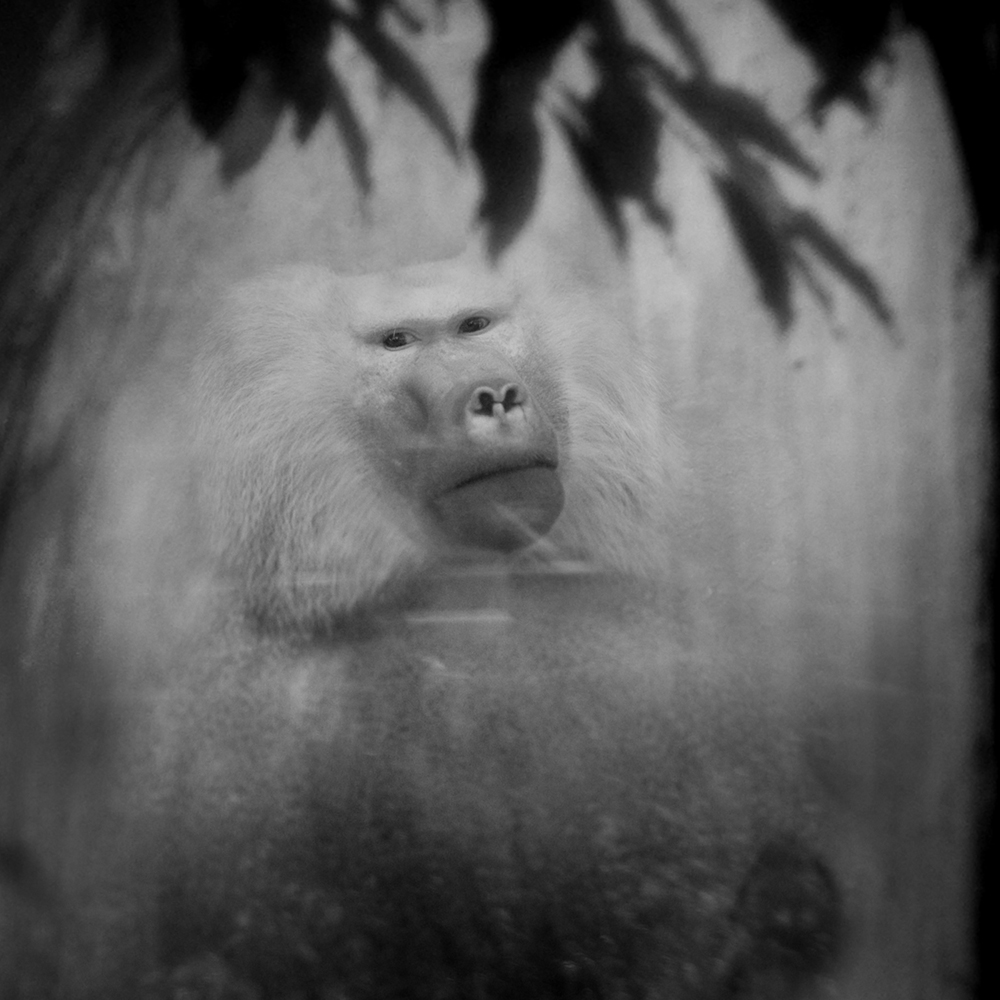 I am grateful to have worked with Bill Schwab of North Light Press and Steven Albahari and Collier Brown of 21st Editions on previous very limited edition projects. I wanted to create a book of this project that would be accessible and affordable, while still using exquisite archival materials. The concept and design had to be simple so the primates could speak for themselves. I knew that I wanted a hard cover book with Smyth-sewn binding and duotone prints on high quality paper. Laurie Shock of Shock Design Books is a friend and book designer in Atlanta. Her knowledge of design, materials and printing process made producing the book an enjoyable learning experience, even during a pandemic and shipping crisis. 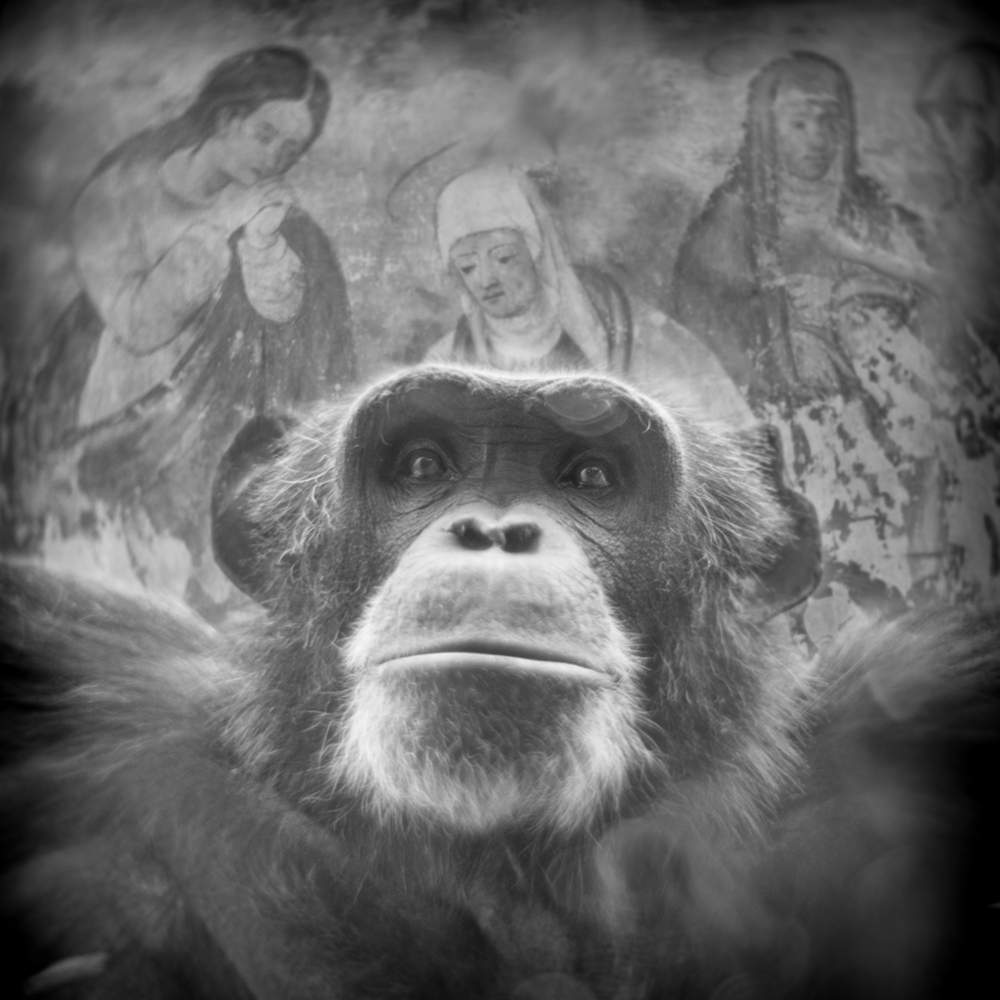 What have you learned from making this work?

I’ve learned that while I cannot save these precious creatures from extinction I can try to live savingly and do my small part in making things better. I look for ways to use my art to help primates. I am currently working with Project Chimps in Georgia to use this book to raise funds and awareness of their mission. It is rewarding to see these chimpanzees move from a research lab to a community of other chimpanzees and to set foot outdoors for the first time. The dedication and love the staff and volunteers show these animals is  inspiring.

NOTE: photograph of Anna (not in the book) is an image of a chimpanzee at Project Chimps. 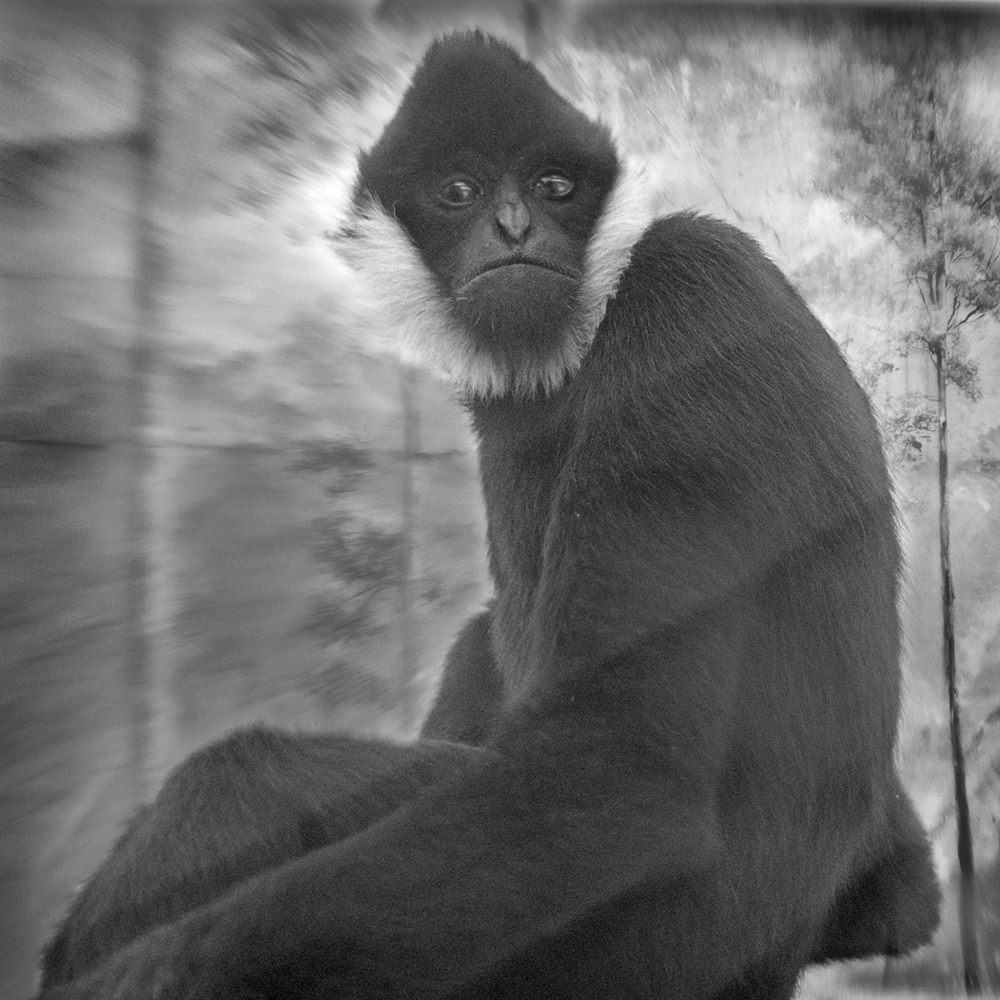 I am impressed by Martha Cassanave’s pinhole photographs of the coast of California. Explorations Along An Imaginary Coastline is a collection of captivating and mysterious images. It inspired me to make pinhole photographs of my Georgia coast  I’ve been photographing on the wilderness barrier islands of Georgia for years, trying to capture the feel of this environment rather than document it. I’m making long exposures with a pinhole camera and also with neutral density filters on vintage lenses. I don’t know where these images will go yet, but it’s rewarding to explore and learn. 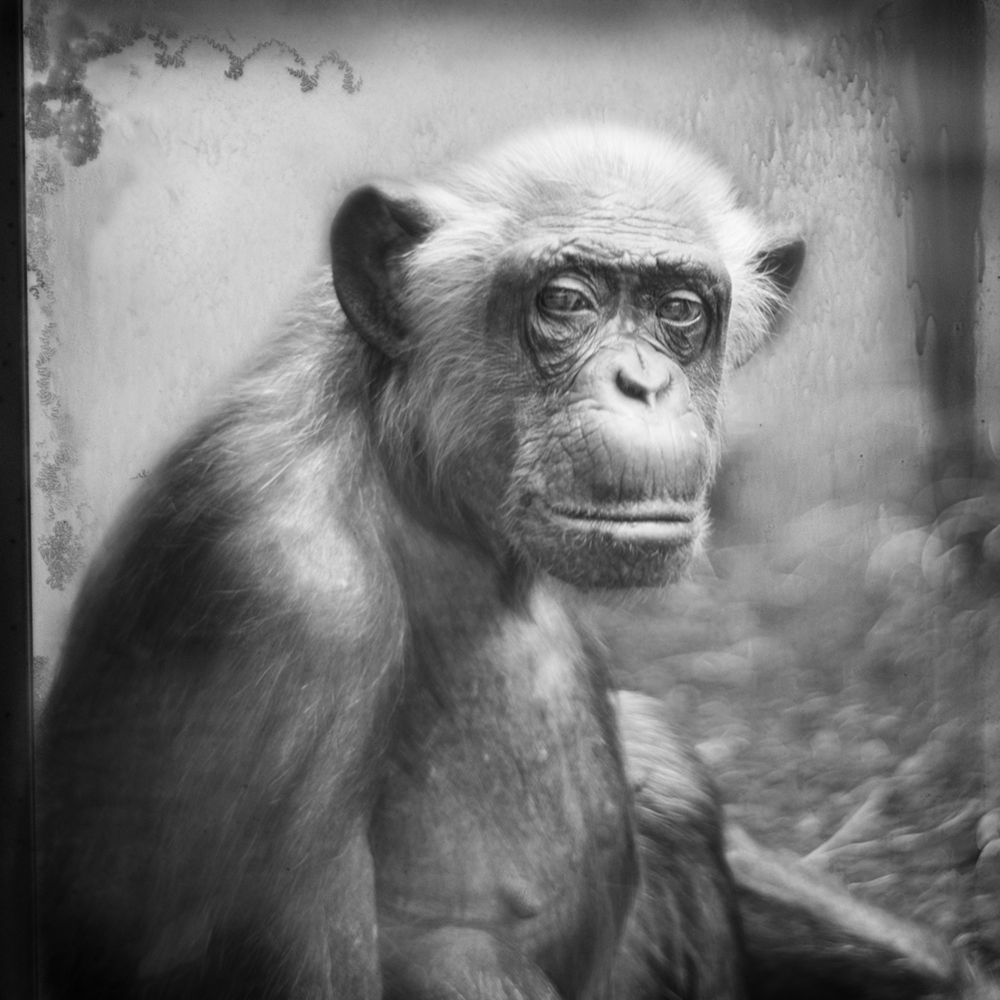 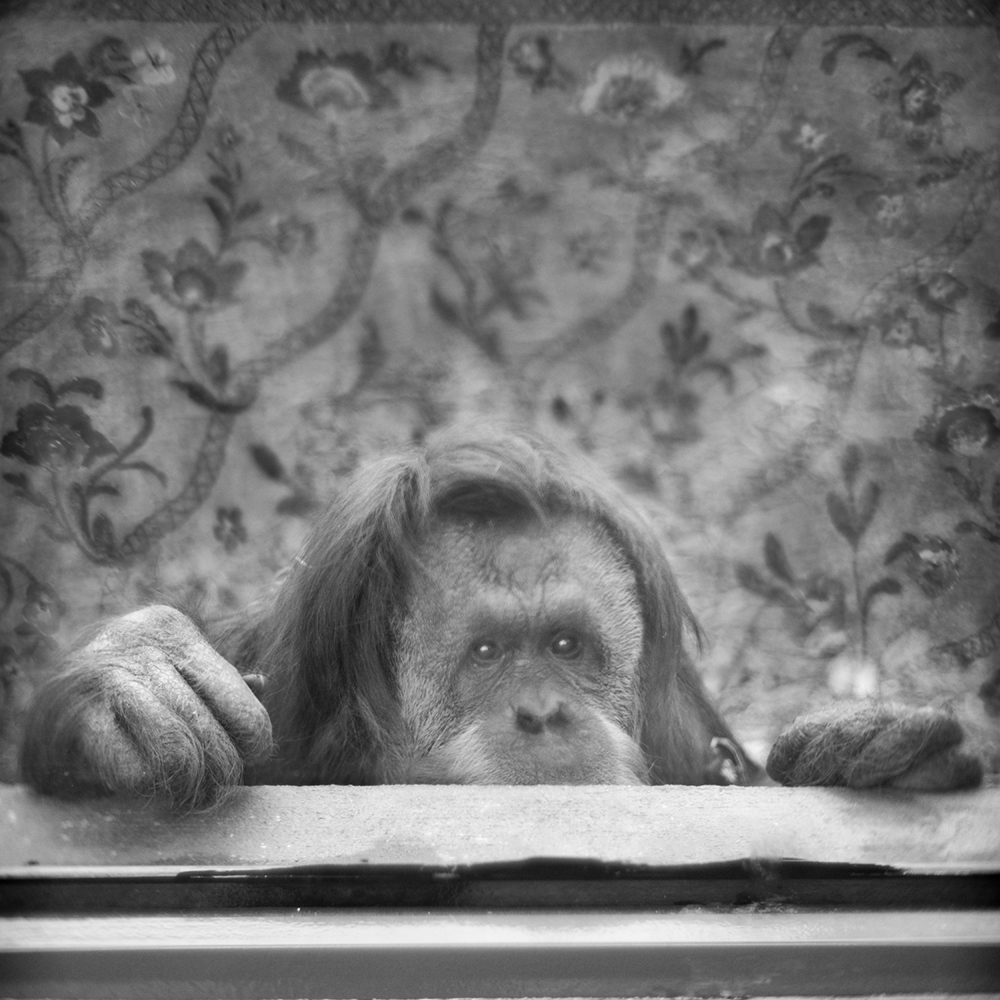 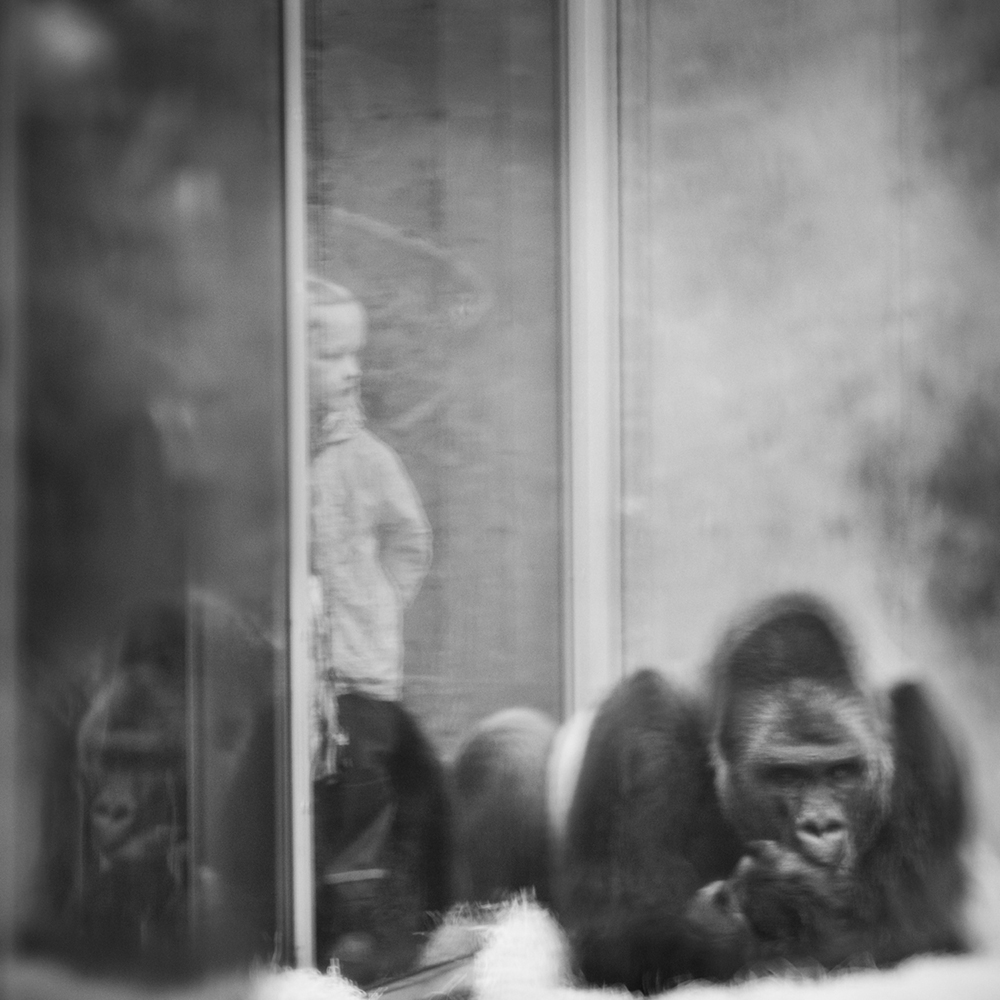 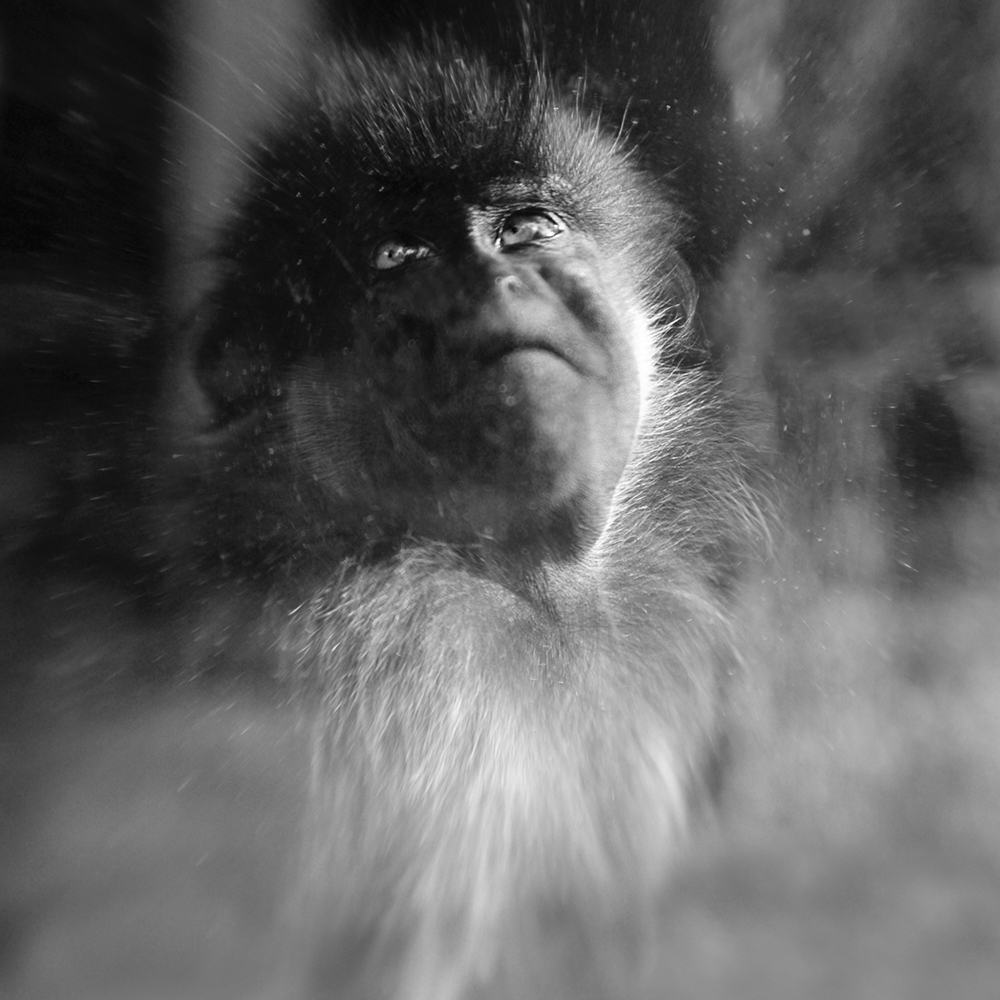 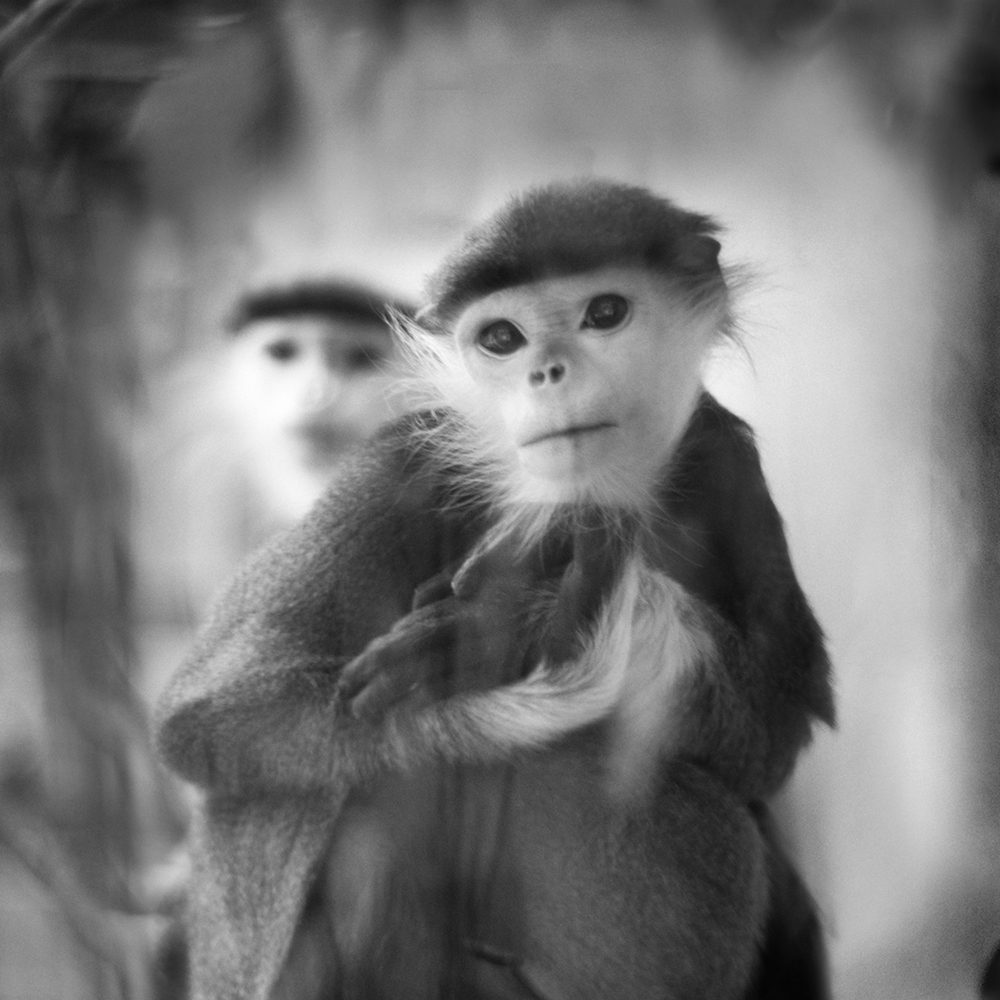 NEXT | Publisher’s Spotlight: VOID >
< R.J. Kern: The Unchosen Ones | PREV