R.J. Kern: The Unchosen Ones by Aline SmithsonDecember 4, 2021 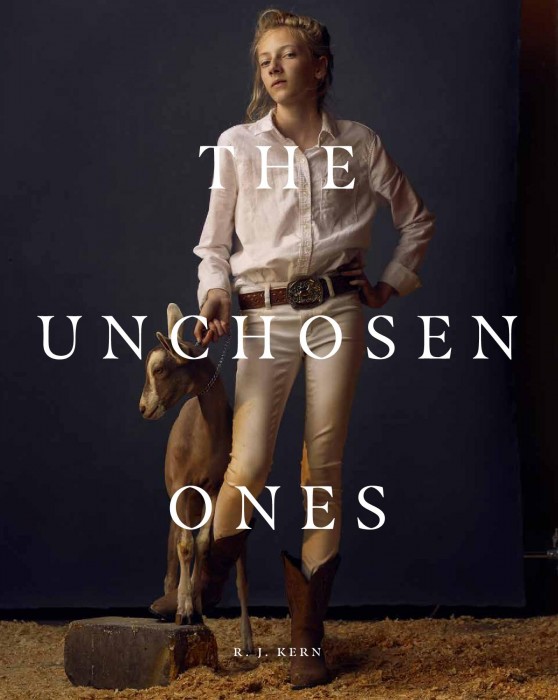 ©R.J. Kern, Book cover of The Chosen Ones, published by MW Editions

The more time I spend with young people growing up on farms and the more I learn about their plans for their futures, the more enthusiastic I am to use the tools I understand, pixels and light, to carry their stories and experiences to a broader audience.  — R. J. Kern

Sharing Minneapolis-based photographer R.J. Kern’s new monograph, The Chosen Ones (MW Editions, November 2021) feels very celebratory as I have loved and followed this project from the first time I was introduced to it at Photolucida a number of years ago. It was a project that was unique, poignant, beautifully crafted and considered, and presented. The project has continued to expand over the last 5 years, as in 2020,  Kern returned to his original subjects and to the places that set the stage for this work, adding the elements of time and landscape to this already stellar series.

Kern began The Unchosen Ones by focusing on  Minnesota 4-H members, each of whom spent a year raising an animal then entered it into a 4-H competition. He first photographed them in 2016, and none of the children who sat for him succeeded in winning first prize, despite the obvious care they had given to their animals. Four years later, in 2020, Kern returned to photograph and interview his young subjects. As he took the second group of photographs, Kern inquired about what his young subjects had carried forward from their previous experience. What were their thoughts, their advice, their dreams and their goals for the future? How do they fit in future agricultural America? The new images are poignant when juxtaposed with the originals, tapping into the mindset of America’s agricultural youth. These beautiful portraits capture a certain America, a rural world, and a time in life when the layered emotions of youth are laid bare.

The Unchosen Ones is available via Amazon, Barnes & Noble and wherever fine arts books are sold. Signed copies may be purchased via Kern’s website.  An interview with the artist follows. 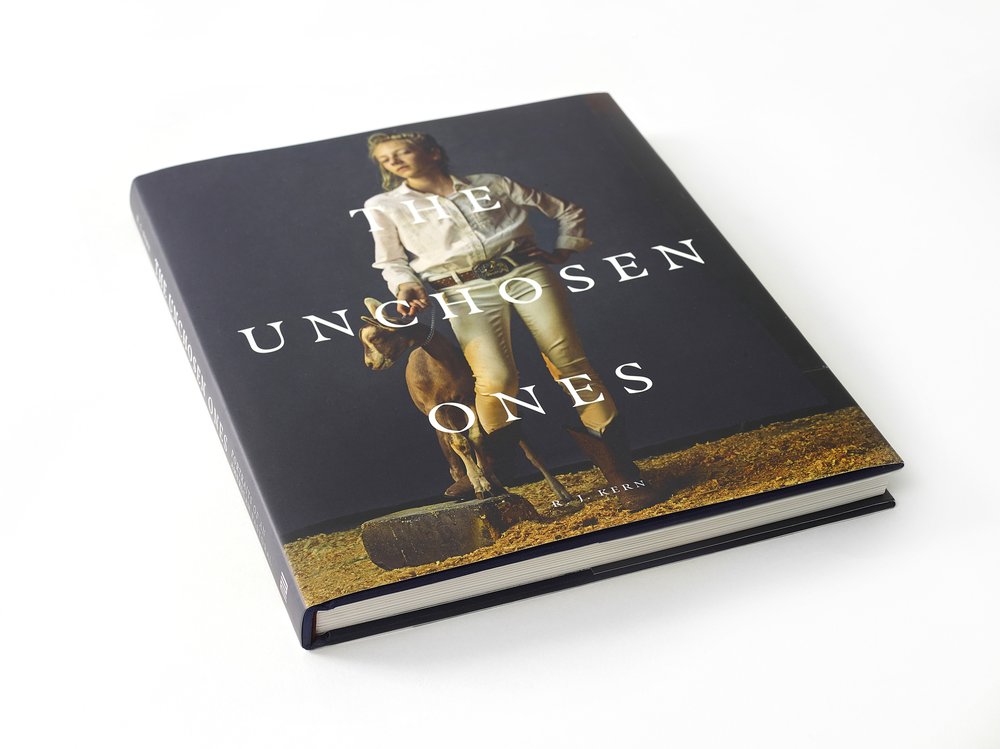 @R.J. Kern, The Unchosen Ones

Also available as a collectors Edition 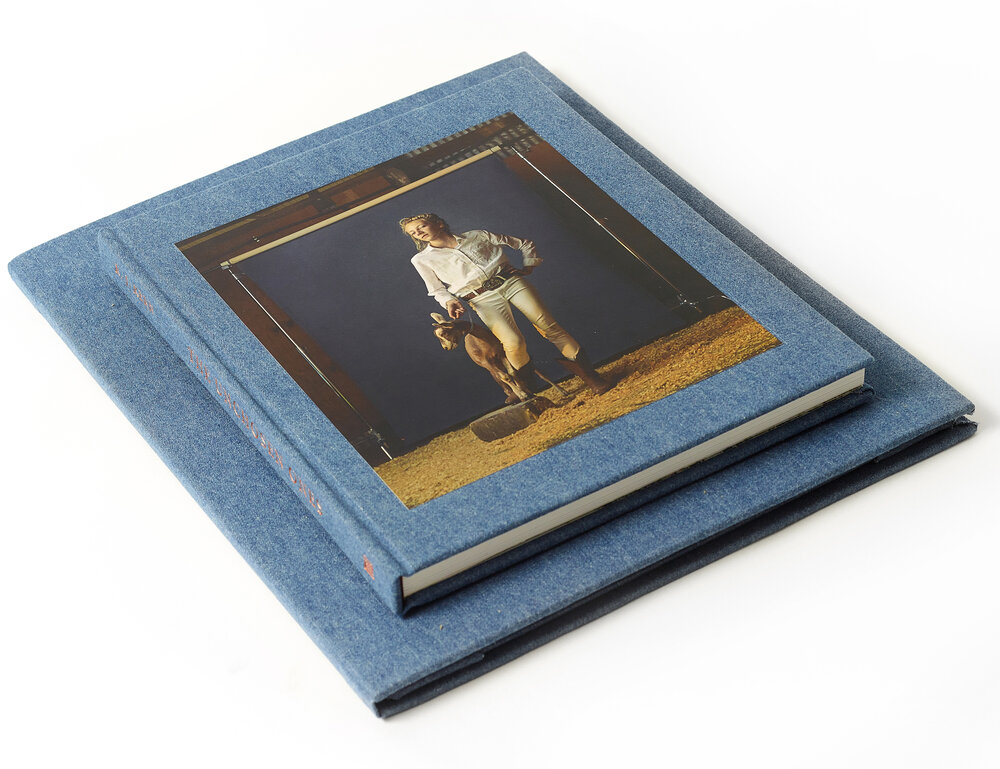 ©R.J. Kern, The Chosen Ones Collector’s Edition and Print

Collector’s Editions (edition of 50) may be purchased directly from the artist.

Edition of 50 + 10AP bookIncludes “American Denim” cover with tipped in photograph front and back, embossed and foil stamping, signed & numbered by artist

Choice of TWO 11 x 14 inch archival pigment prints on Hahnemühle Photo Rag 308 gsm, signed, numbered, & dated on verso, limited to edition of 10 + 2AP (prints may not be the same).

After purchase, customer will receive an email with PDF to select prints.
Pre-order to receive your preferred choice. Once print edition reaches 10, the edition will close.

Your support helps sustain an ongoing creative practice focused on increasing awareness of the life skills learned through raising and caring of animals. 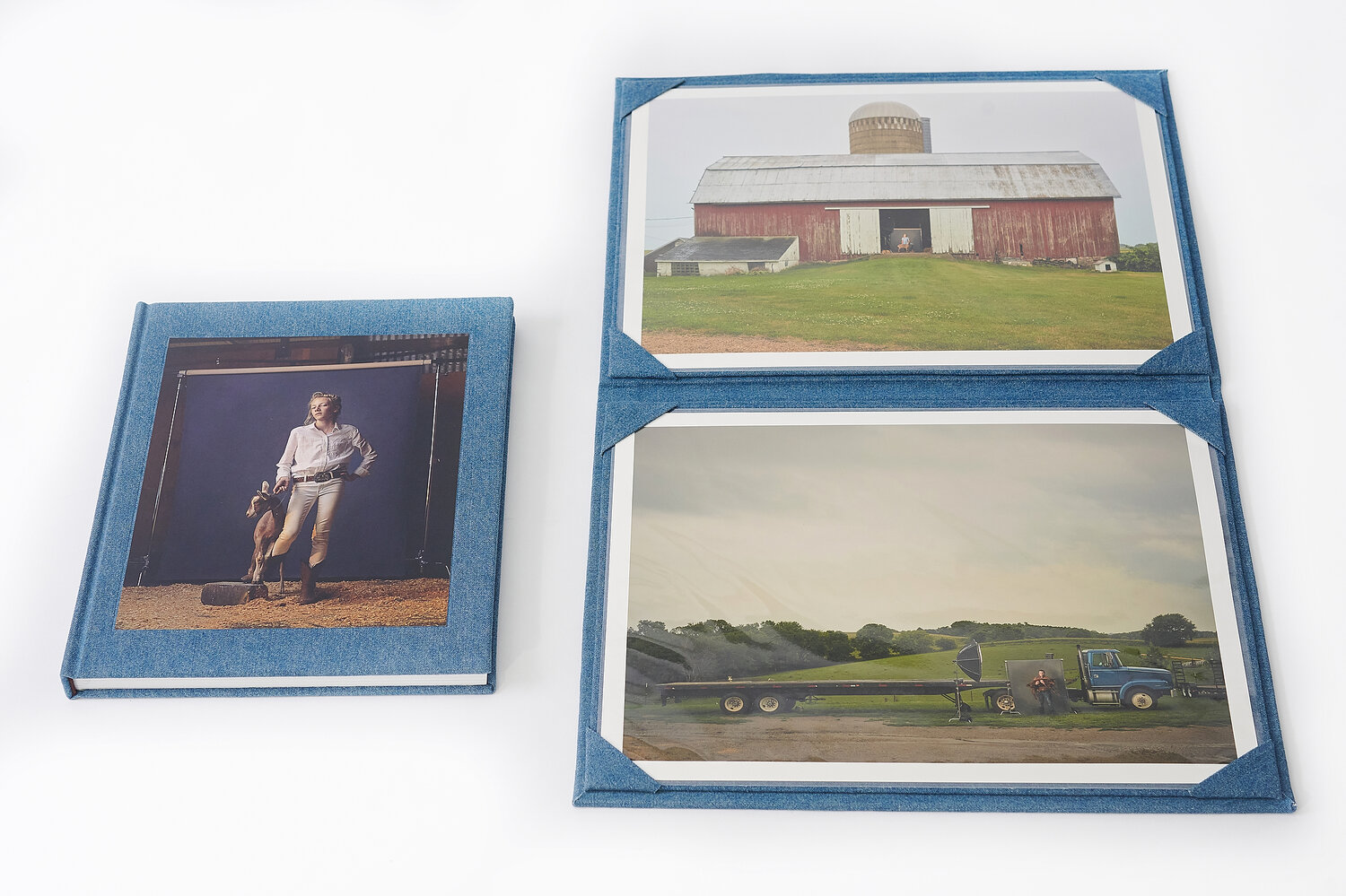 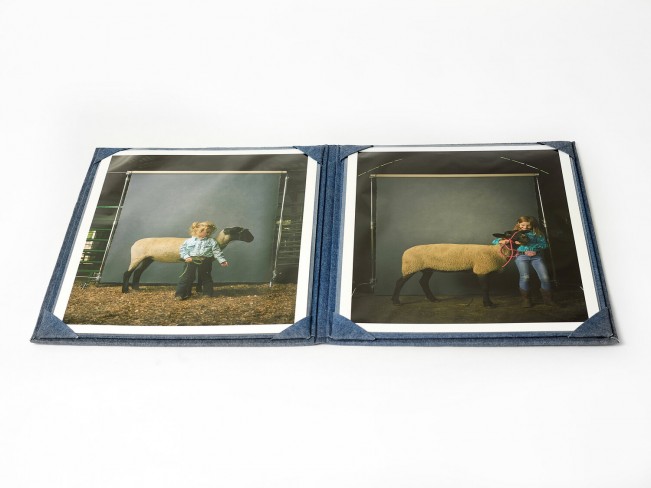 R. J. Kern (b. 1978) is an American artist whose work investigates ideas of home, ancestry, and a sense of place. His portraits focus on intimate, interdependent relationships of people, animals, and landscape as a means of exploring how ancestry shapes identity and how myth intertwines with personal history.

In addition to numerous awards and exhibitions, Kern’s work has been featured by National Geographic, the BBC, PBS, PDN, and the Royal Photographic Society Journal. 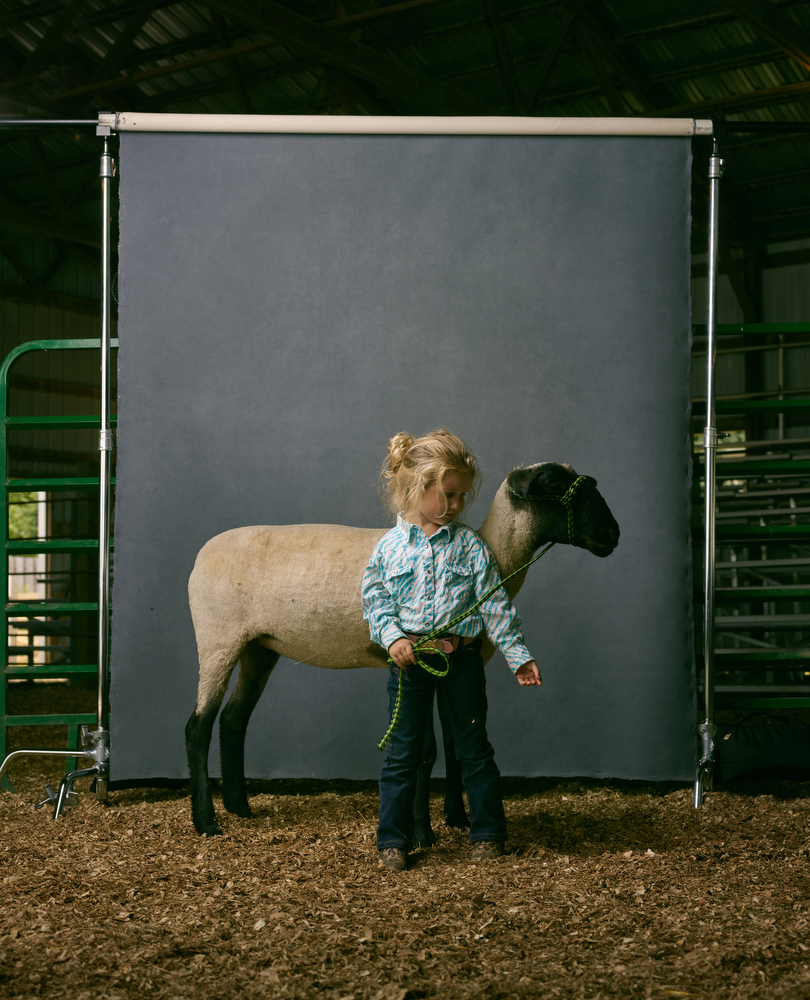 Before we dive into that, can you share the landscape of your earlier years and how you found your way to photography.

I had a wonderful high school art teacher, Ricker Winsor, who opened my eyes to the photography darkroom in 1994. While working at National Geographic (2000-2005), several mentors encouraged me to find my “schtick.” By 2012, I was supporting myself as a wedding and portrait photographer.

My camera led me from an inquiry into my lineage in the farming communities of Scandinavia and Ireland to the exploration of similar communities near my home in Minnesota. Photographing domesticated animals was the starting point. But increasingly my attention has been captured by the next generation of young people, who may or may not, be the stewards of rural communities and economies in the future. 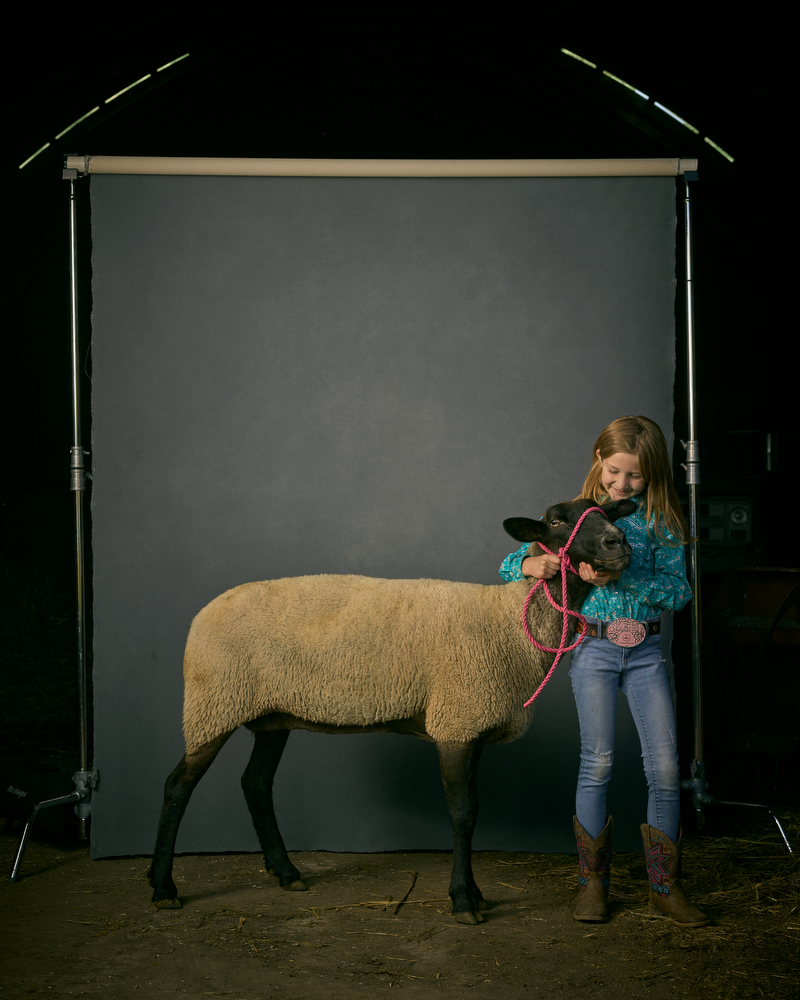 As you know, I love this project and seeing the evolution of it in the book is so exciting. How did you come to creating the work initially?

The more time I spend with young people growing up on farms and the more I learn about their plans for their own futures, the more compelled I feel to use the tools I understand, pixels and light, to carry their stories and experiences to a broader audience.

In my own idealized world, I long for sweetness, something like heaven—a place filled with the innocence of childhood and the support of a strong community. A place that exists between the real and the imagined. As an outsider to daily agricultural life, I was influenced by preconceptions about that world. I want my photographs to capture the ephemerality of youth amid the often harsh realities of rural life. 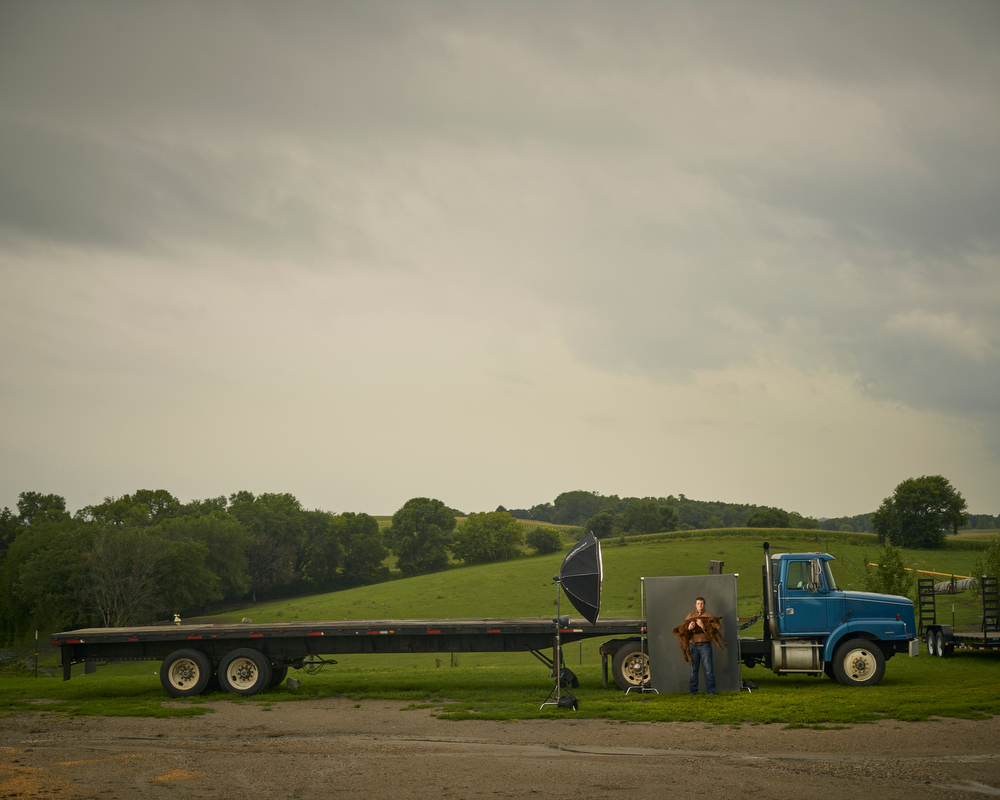 ©R.J. Kern, Eric and R. J., Pastoral Study, 2020, from the book The Unchosen Ones, published by MW Editions

I love work about time and your revisiting of your subjects years later adds another layer of poignancy. What surprises did you encounter when photographing the same person at an older age?

Reconnecting created the opportunity to assay the mindset of rural youth, especially as it pertains to their personal future in agriculture. I asked what they had carried forward from their competition experience, and about their thoughts and advice, their dreams and their goals. Do they see themselves in the agricultural future of America? Their answers surprised me and contained a few unanticipated plot twists. One of them had landed in jail. Another had given birth—twice. As I explored these young people’s doubts, fears, and frustrations, I was heartened to learn of their ability to overcome adversity and rise to a challenge, whether it was self-imposed or one that life threw at them. 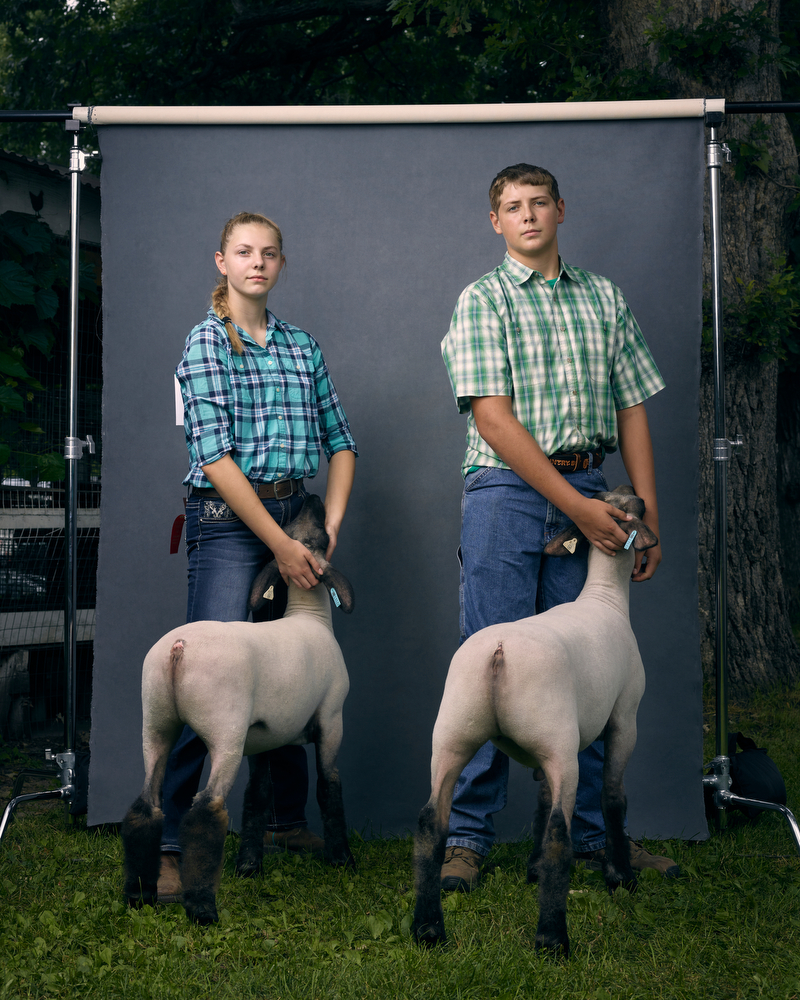 ©R.J. Kern, Emma and Ethan with sheep, Blue Earth County Fair, Minnesota, 2016, from the book The Unchosen Ones, published by MW Editions

I always think creating portraits are a two way mirror. Do you see yourself in your subjects?

The Unchosen Ones are all of us. At one point or another we’re all unchosen. How we respond and build back from the experience is what ultimately defines us. The line between winning and losing can be negligible and it changes over time. What was considered beautiful or perfection 50 years or even 30 years ago, isn’t necessarily the case today.

While none of these kids took first place in 2016, a lot of them built on the experience to earn ribbons or find success in other areas of interest. They used the experience as a stepping stone. 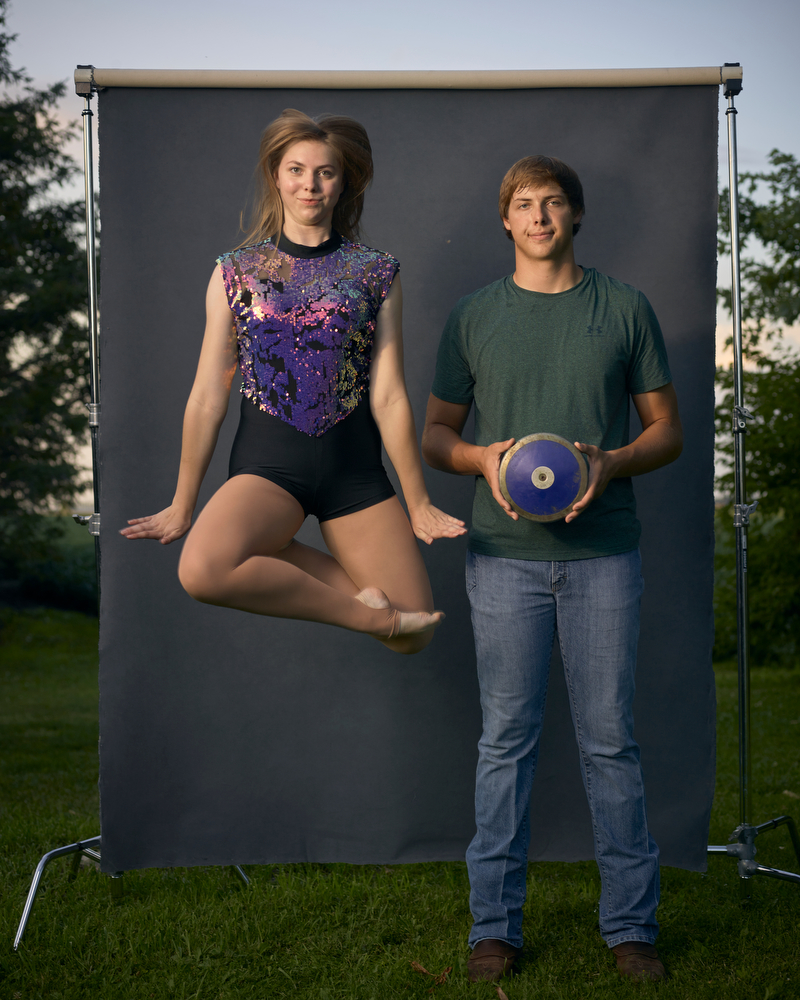 ©R.J. Kern, Emma and Ethan, Blue Earth County, Minnesota, 2020, from the book The Unchosen Ones published by MW Editions

In The Unchosen Ones series, did you initially plan on revisiting the subjects down the line?

Being a parent myself and seeing kids grow quickly in four-years, I was inspired to return and photograph the growth. In 2020, I received a grant to rephotograph the same youth. Since the county and state fairs were cancelled due to Covid-19, I was able to continue the project socially-distant. 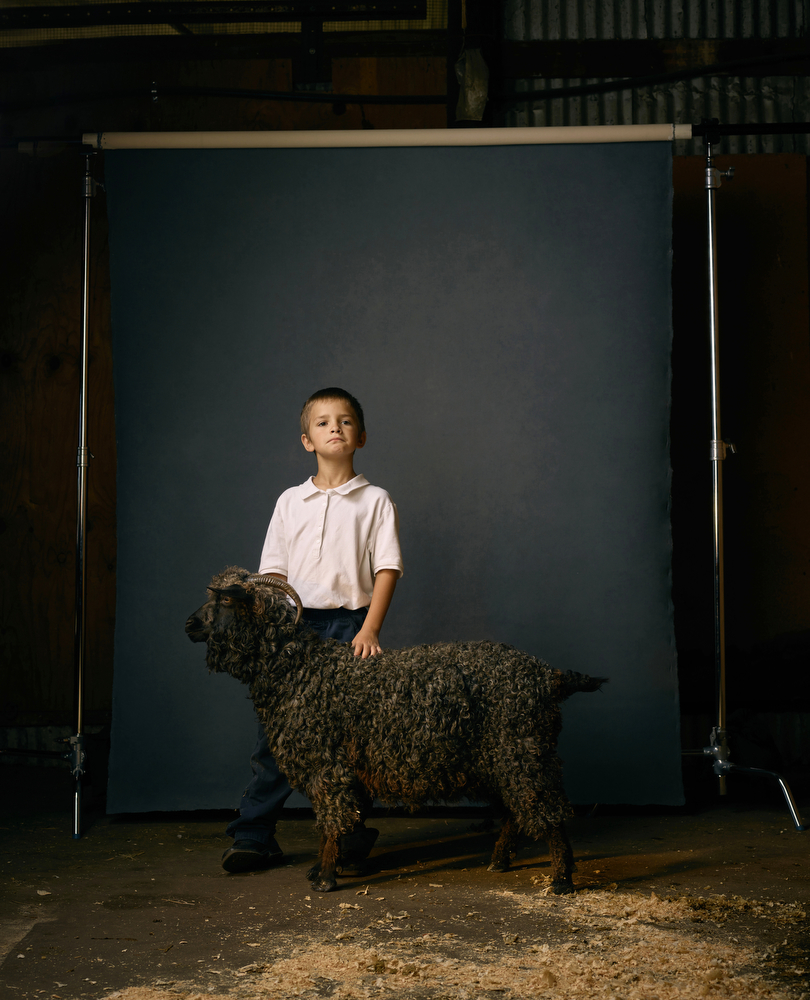 ©R.J.Kern, Kol and Annabelle, Anoka County Fair, Minnesota, 2016, from the book The Unchosen Ones published by MW Editions

In 2018, I self-published an artist book of the work created in 2016 and gave many of the copies to participants. This became important way to build on the relationships with the 65 youth I photographed at 10 county fairs.

In 2020, I was able to re-photograph over 50 of the same youth. I felt the diptychs were important to see what is changing and what remains the same. I also wanted to showcase more of the sense of place where the portraits were created, which is why I created the photographs showcasing the real pastoral. 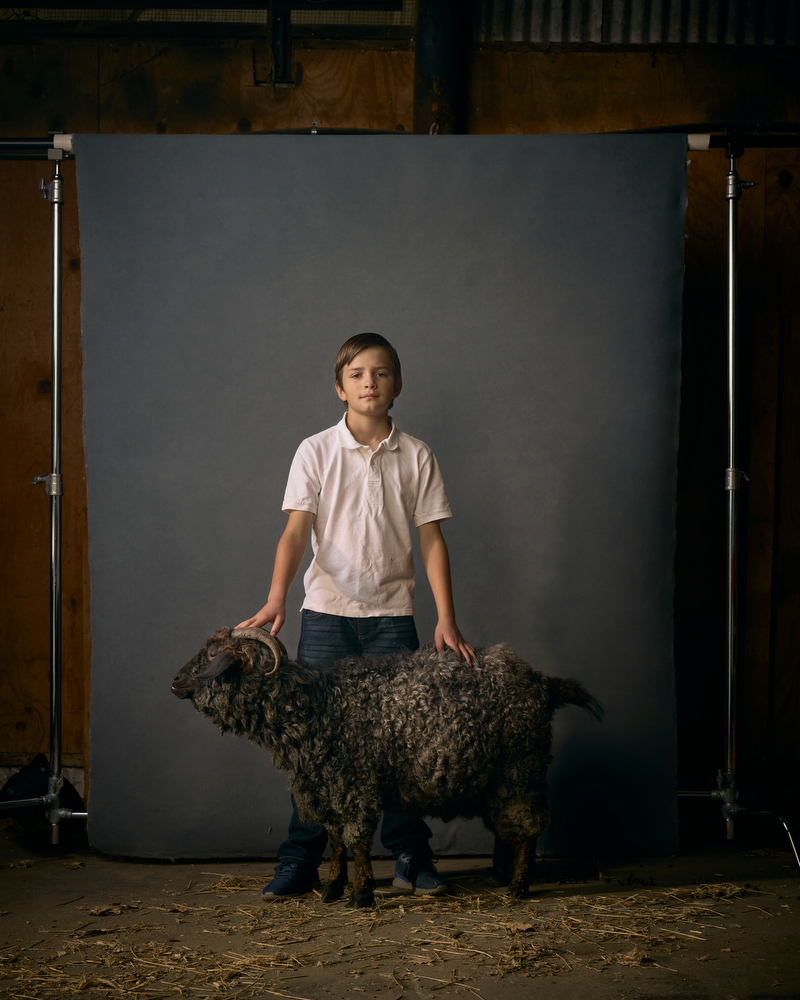 ©R.J. Kern, Kol and Annabelle, Anoka County, Minnesota, 2020, from the book The Unchosen Ones published by MW Editions.

After going through the process of making a book, do you think it will inform your future projects?

Of course. I ask myself both What am I contributing? and What am I missing? One obvious answer is diversity. 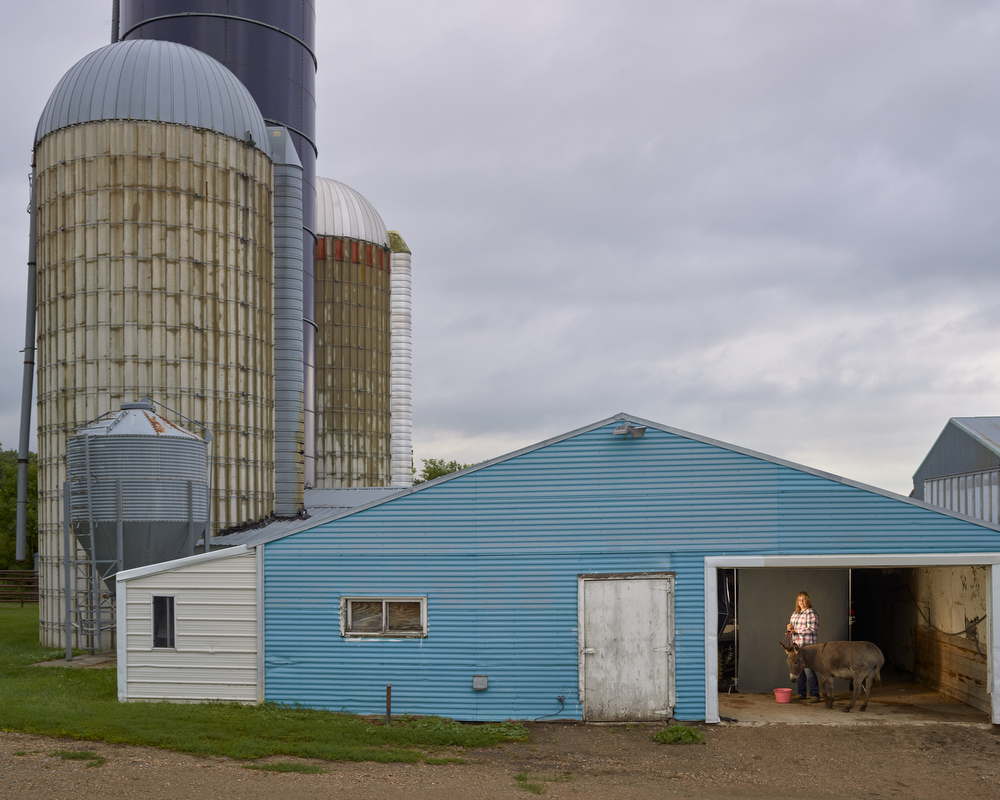 ©R. J. Kern, Carlana and donkey, Pastoral Study, 2020, from the book The Unchosen Ones published by MW Editions

I draw on work created by photographers August Sander, Diane Arbus, Mike Disfarmer, Robert Frank, and Peter Feldstein as well as contemporaries such as Alec Soth and Rineke Dijkstra, especially in creating “portraits of normal people in rural America,” 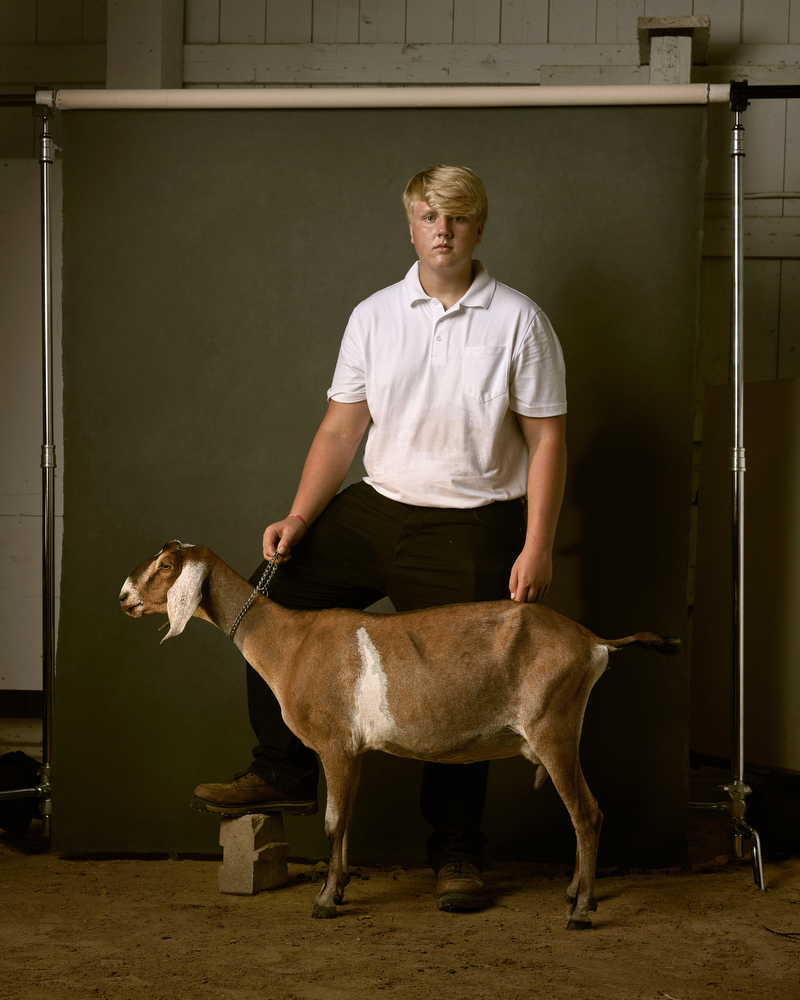 Do you have a favorite part of your artistic practice (the actual shooting portion, editing, etc.?)

Seeing a completed project come together in all the various components— book, exhibition, or community engagement— excites me. It’s not what drives me, however. The creative part, photographing and editing, is the part I love the most. However, that is just one pillar. Without the pillars of networking, marketing, sales, and thinking, I wouldn’t be able to do the part I love. 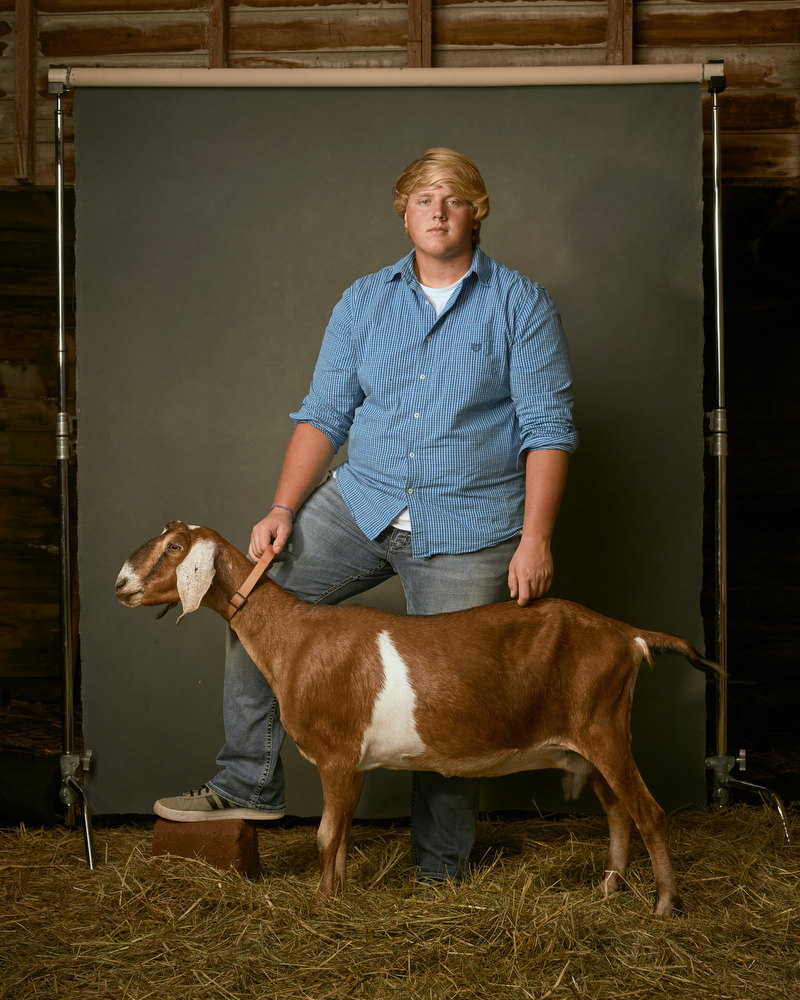 When you are setting out on a new project, do you have a specific aesthetic for the images, or does that develop as you work?

Nineteenth-century painting has influenced my approach to lighting and composition. I enjoy working with both natural and artificial light exploring various photographic formats. Historical photographic processes have influenced my studio practice. 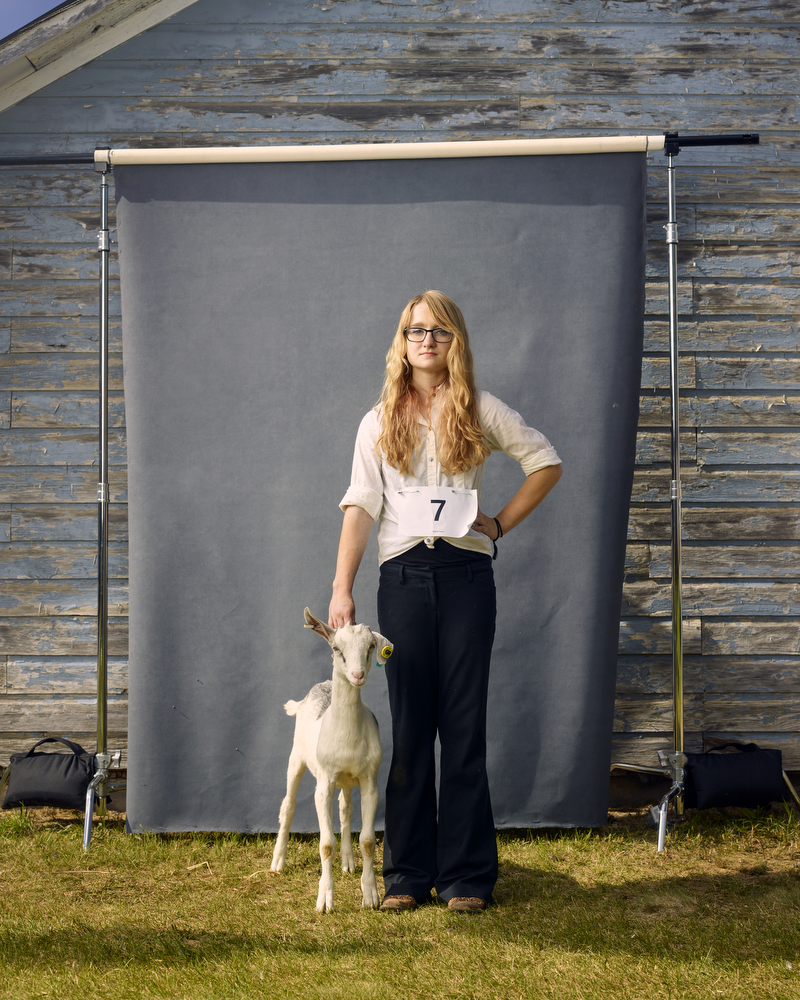 ©R. J. Kern, Shania and Greg, Hubbard County Fair, Minnesota, 2016, from the book The Unchosen Ones published by MW Editions

I hope to expand the scope of this project to include the changing complexion of youth in other regions of the United States. My intention is to expand the representation, especially with regard to the socio-economic range and the geographic scope. And in so doing answer these fundamental questions: What is changing in rural America? What is the same? And what, if any, values are transmitted through the raising and husbandry of animals. Is there something about the rural experience of raising animals that creates a common bond across diverse ethnic groups? 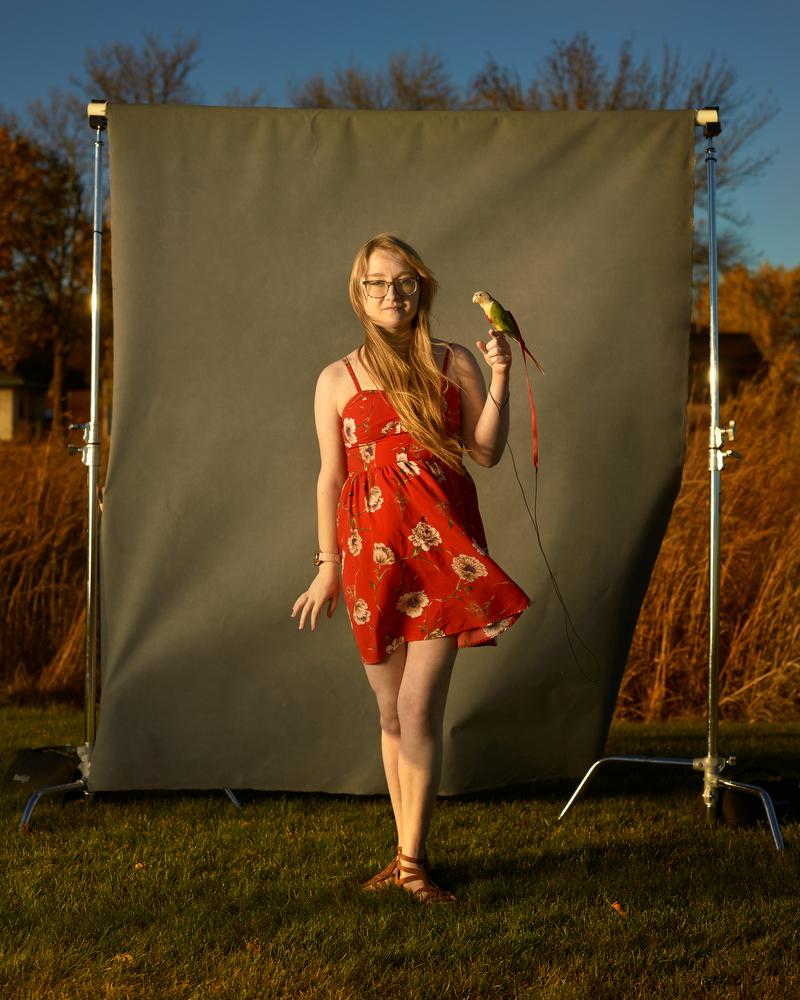 ©R. J. Kern, Shania and Pineapple, Ramsey County, Minnesota, 2020, from the book The Unchosen Ones published by MW Editions 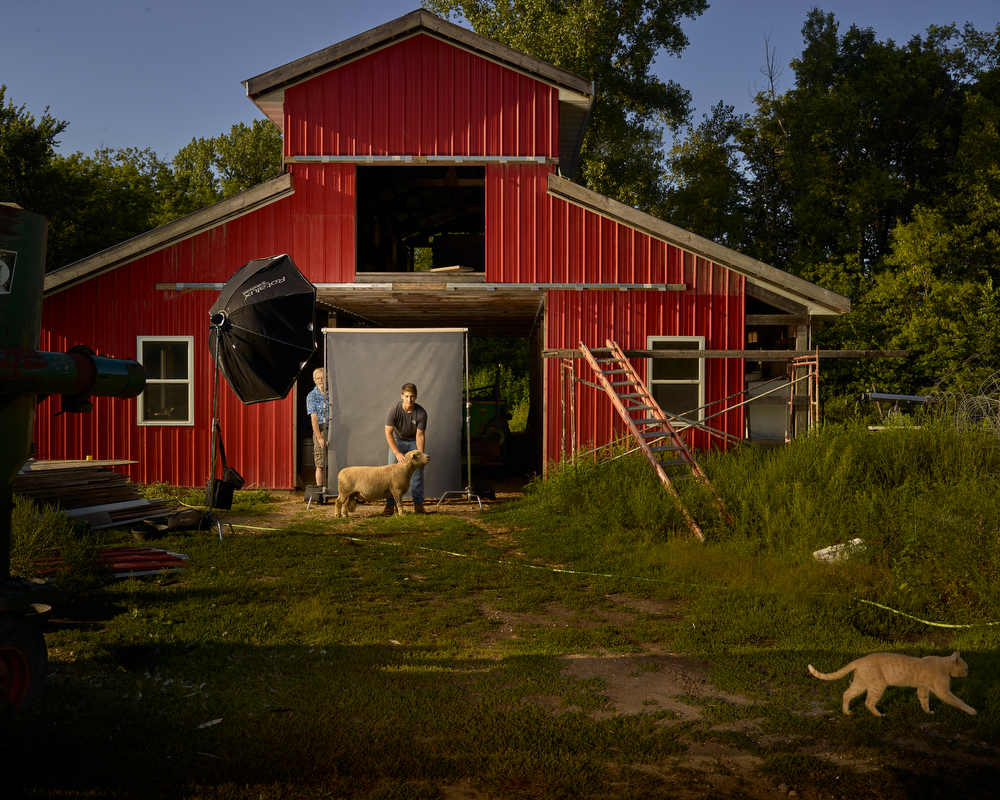 ©R.J. Kern, David, sheep, and Grandpa, Pastoral Study, 2020, from The Unchosen Ones published by MW Editions 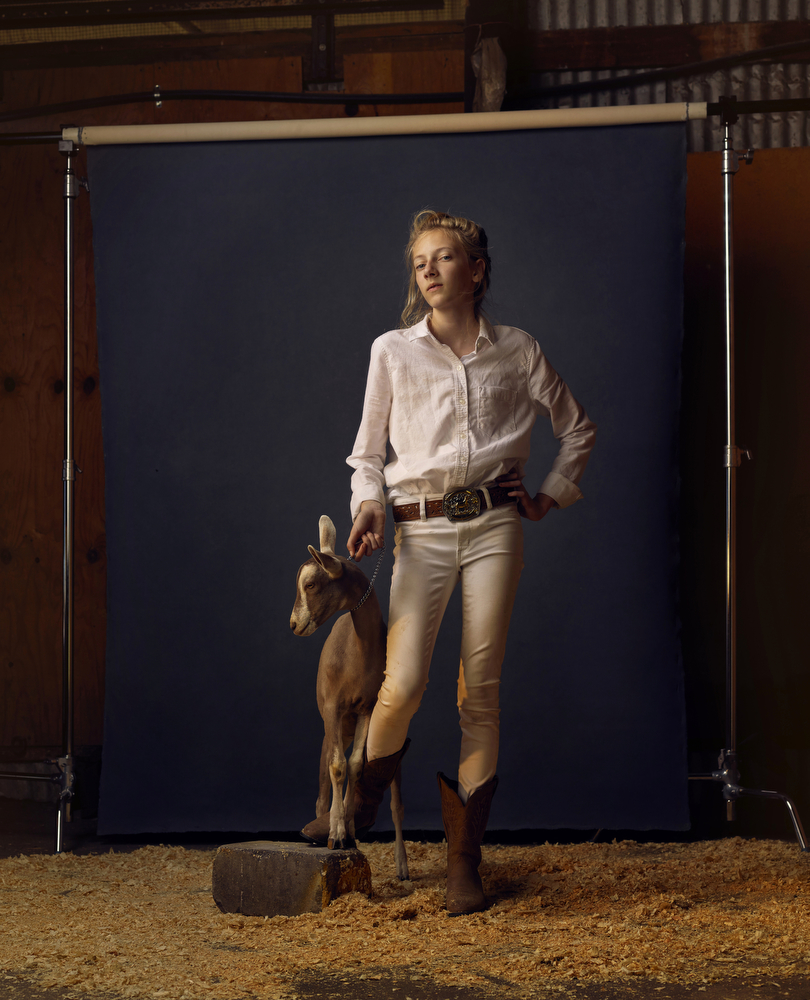 ©R.J.Kern, Kenzi and Hootie, Anoka County Fair, Minnesota, 2016, from the book The Unchosen Ones, from the publisher MW Editions 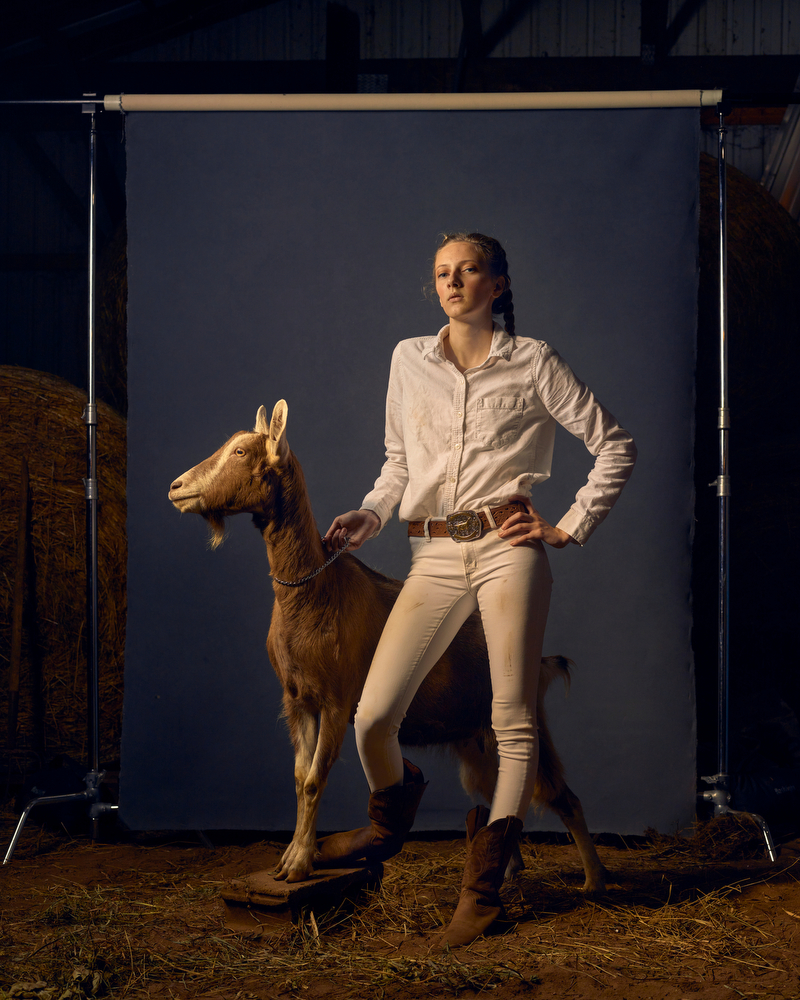