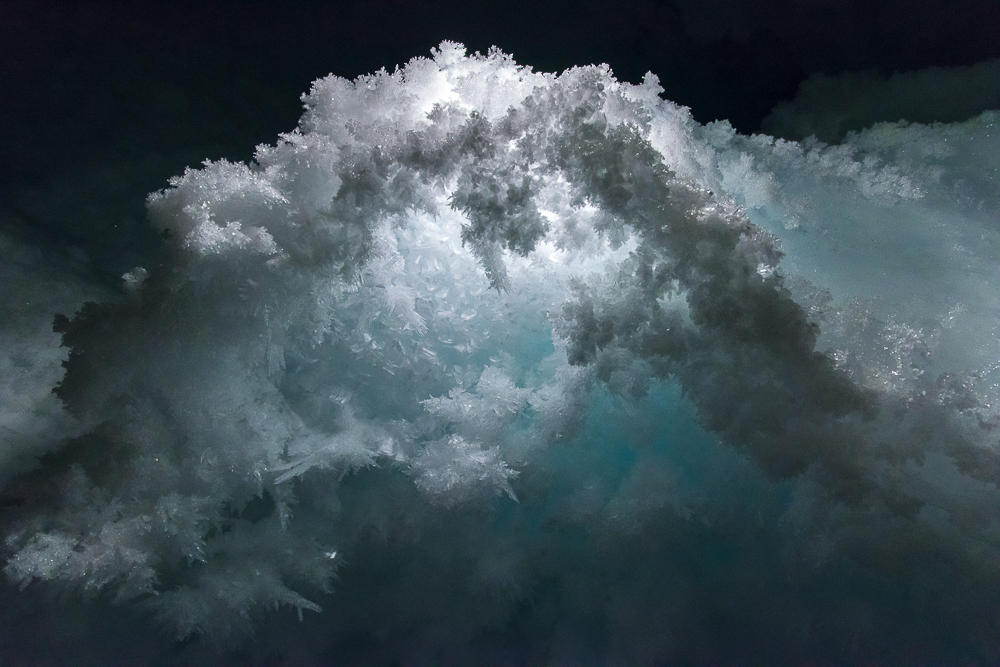 ©Helen Glazer, Fractal Arch, Erebus Ice Tongue Cave 26.75 x 40 inches The Erebus ice tongue is the end of a glacier that extends onto the sea ice on McMurdo Sound. A small opening in the tongue leads to an ice cave containing unusual and fragile ice crystal structures, accessible only a few weeks a year. Inside it was pitch dark. I backlit these features with a lamp we brought inside.

For those attending FotoFest, one must-see exhibition is Helen Glazer: Walking in Antarctica, now through October 15 at the Altharetta Yeargin Art Museum in Houston, Texas, the first stop on a five-year tour of the US. The interdisciplinary exhibition includes 33 photographs, four sculptures made from 3D scans of ice and rock formations, and an audio tour. The museum is hosting a series of public programs and is also open by appointment. On Saturday, October 15, there will be an Open House, 10 a.m. to Noon

Helen Glazer‘s project, Walking in Antarctica, allows us to get up close and personal to worlds that are remote and unseen as a way to not only call attention to unique landscapes but to consider the future of our planet. In addition to her photographs, Glazer turns images into 3D scans via photogrammetry, a process whereby a series of still photos of a scene can be reconstructed by software into a detailed three-dimensional file. 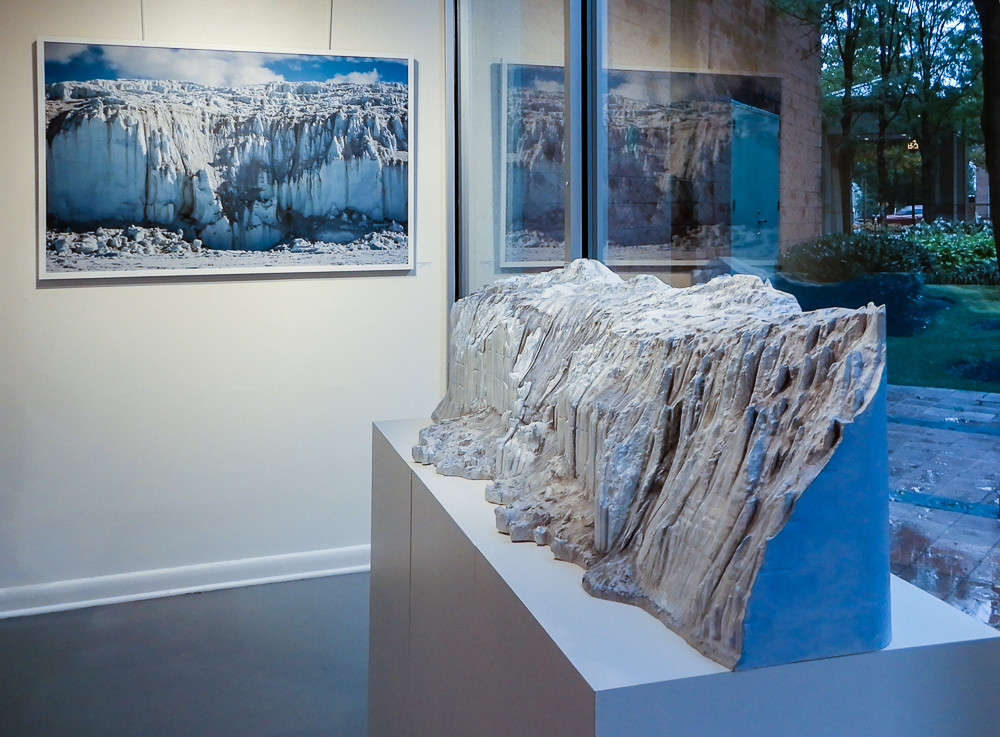 ©Helen Glazer, Canada Glacier from Lake Fryxell (sculpture with source photo) I photographed a section of the 60-foot-high side of the Canada Glacier from the frozen surface of Lake Fryxell. Over 160 photos, including this one, were processed into a 3D file that I edited in 3D modeling software, then carved on a CNC (computer-controlled) router. I hand finished and hand painted it.

Helen Glazer is a Baltimore-based artist working in photography and photo-based sculpture. A 2015 participant in the National Science Foundation Antarctic Artists and Writers Program, her solo show of that project, Walking in Antarctica, premiered at Goucher College, Baltimore, in 2017 and is touring nationally from 2022 to 2027 by Exhibits USA, the traveling exhibition rental service of the Mid-America Arts Alliance (eusa.org). Her work has also been displayed at the Center for Art + Environment, Nevada Museum of Art; Baltimore-Washington International Marshall Airport; Nailya Alexander Gallery, New York; Delaware Art Museum; and other venues. She has received two Rubys Awards from the Robert W. Deutsch Foundation, one for Walking in Antarctica one for a work in progress, a photo book about a former US military base in Kangerlussuaq, Greenland. Photographs from that project will also become part of a permanent exhibition at the Kangerlussuaq Museum, funded by a US Embassy cultural exchange grant. 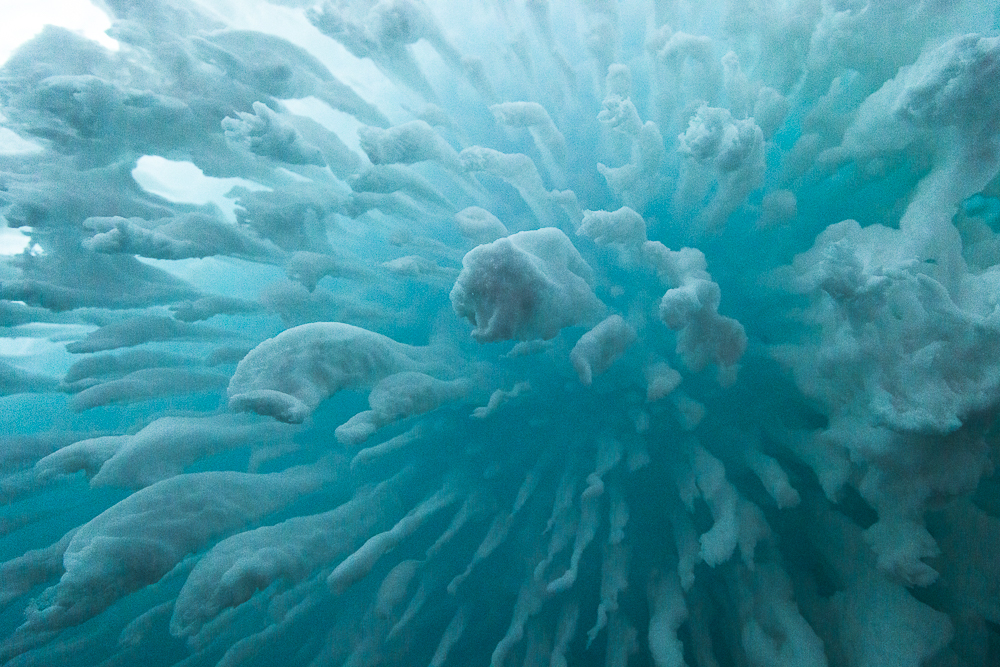 Inspired by scientific insights into complex physical forces that shape landscapes, I explore the outdoors with my camera. I am attracted to uncommonly visited places, from the remote Antarctic and Arctic wilderness to the overgrown banks of an urban stream, looking for the visual traces that reveal how natural and manmade forces have shaped the space. Some photographs are produced as archival prints. Others I turn into 3D scans via photogrammetry, a process whereby a series of still photos of a scene can be reconstructed by software into a detailed three-dimensional file. I strive to convey the wonder and complexity of the natural world to others, hoping to motivate viewers to explore their environment and protect wild places. My study of earth science over the past several years heightened my awareness of the multiple factors shaping the land over time. In recognizing that complex patterns in nature express the particular physical forces at work, I became more attuned to the interplay between geology, climate, life forms, and human activity in a given location. That awareness informs how I select and compose my photographs. I search out surprising incidents that convey nature’s inexhaustible variety, which I may underscore with vantage points that foster spatial ambiguities and focus attention on incidents that typically escape notice. 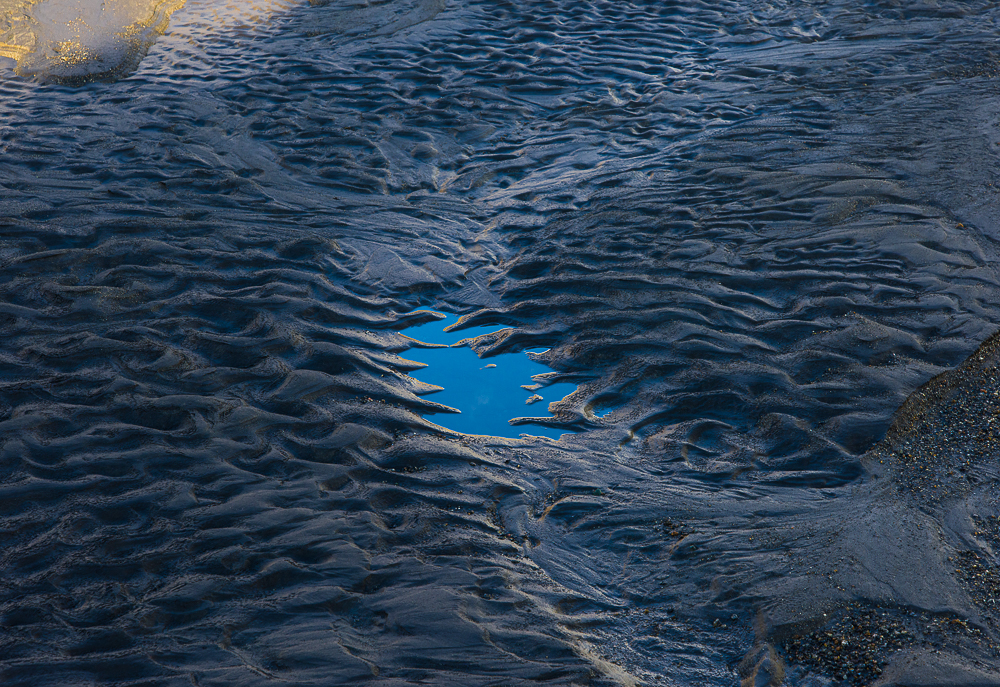 ©Helen Glazer, Scalloped Sand, Lake Hoare 26.75 x 40 inches Sand in the shadow of the Canada Glacier beside Lake Hoare during the brief melt season, a puddle reflecting the clear blue sky of 24-hour daylight at 1:20 a.m. 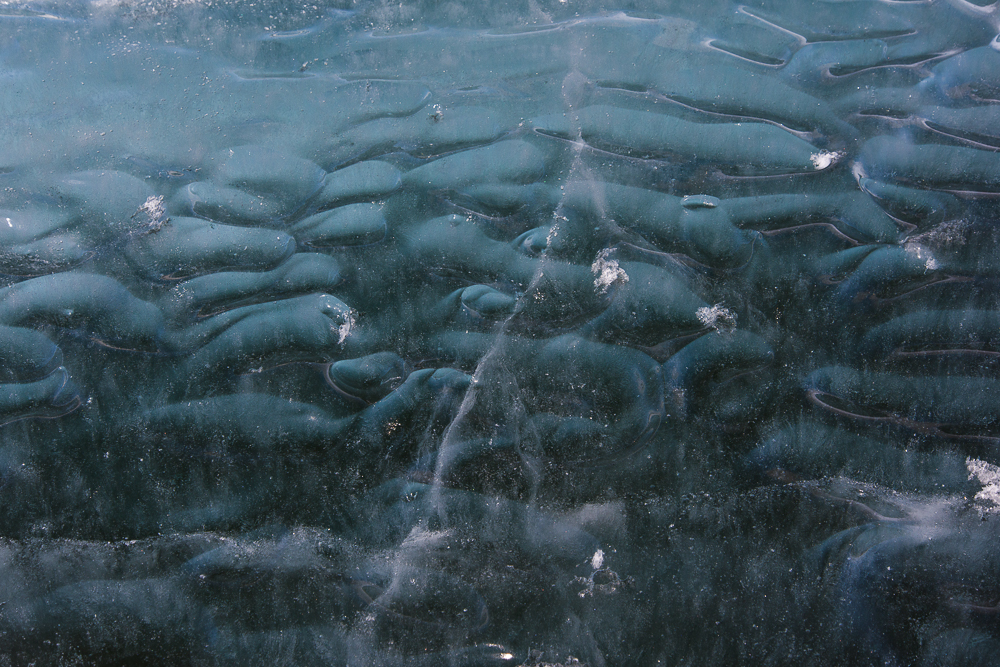 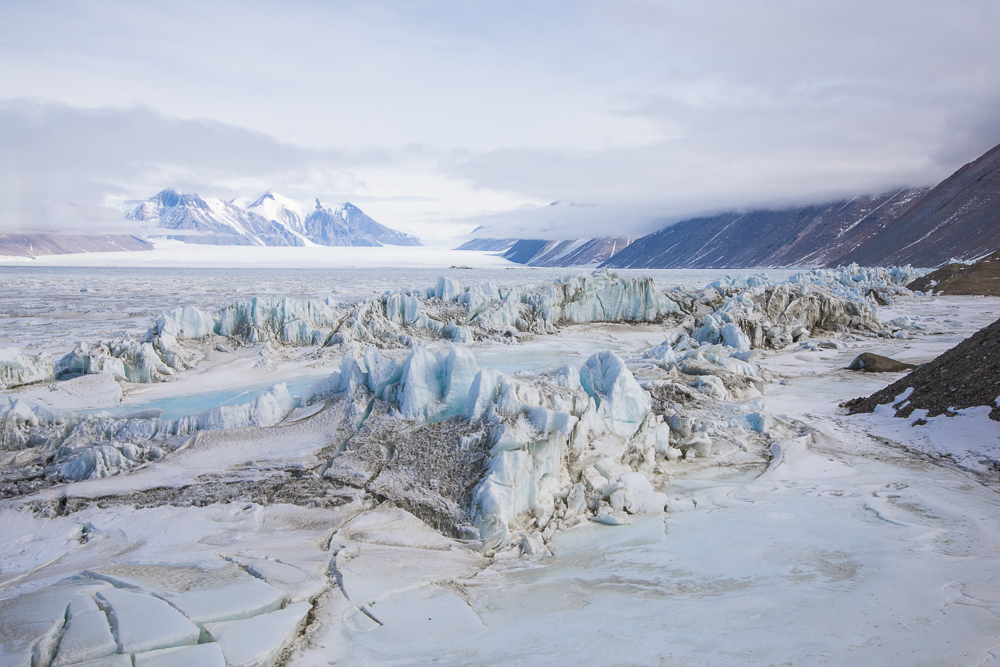 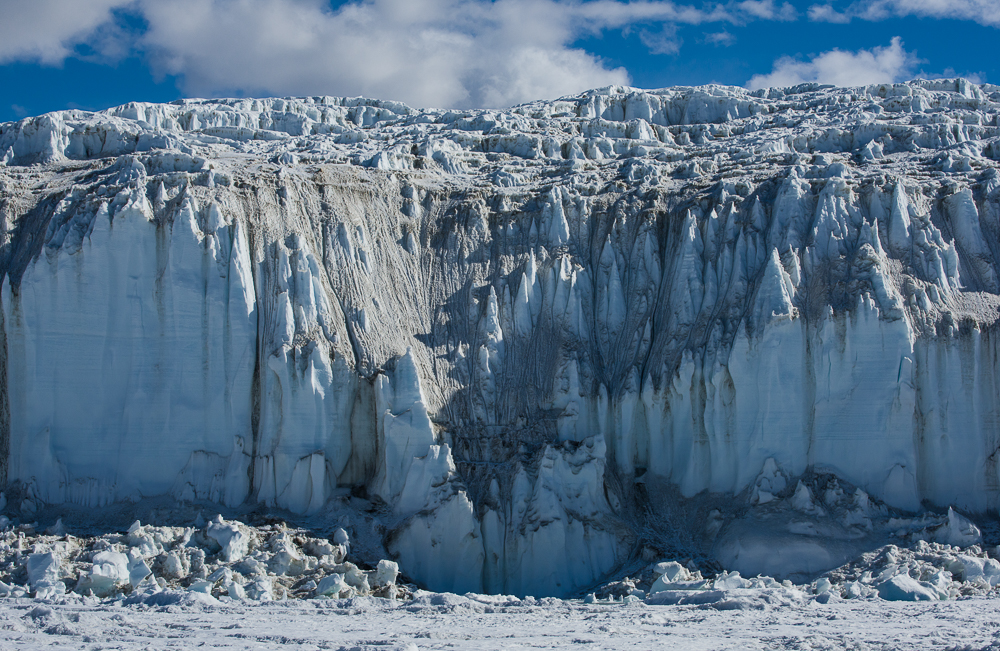 ©Helen Glazer, Canada Glacier from Lake Fryxell archival pigment print, 32.5 x 50 inches This is one of the source photographs for the 3D file that I made into a sculpture. 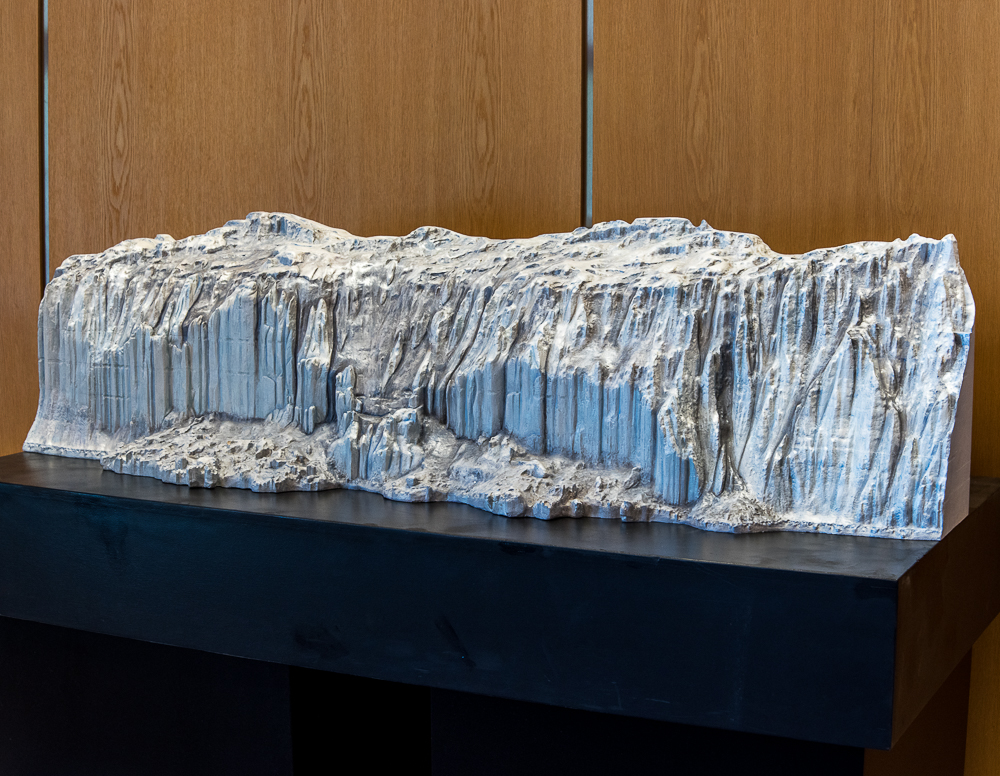 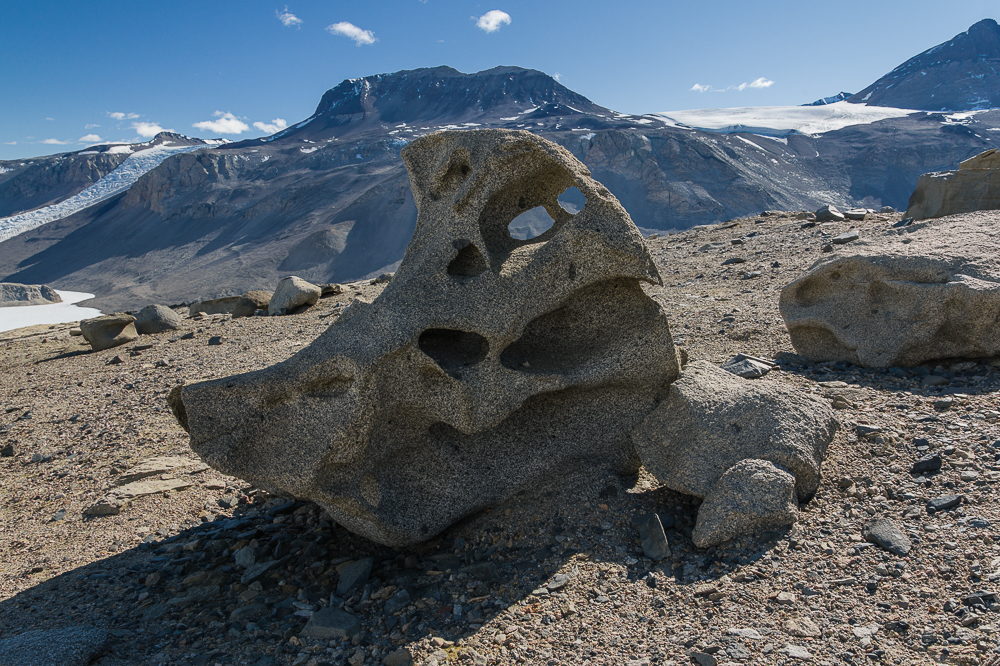 ©Helen Glazer, “Bird” Ventifact, Dry Valleys 14.75 x 22 inches At the top of the steep, gravel-covered hill in the Dry Valleys of Antarctica is a plateau strewn with ventifacts, giant boulders eroded into strange shapes by fierce winds. This is one of the source photos for the 3D file that I made into a sculpture. 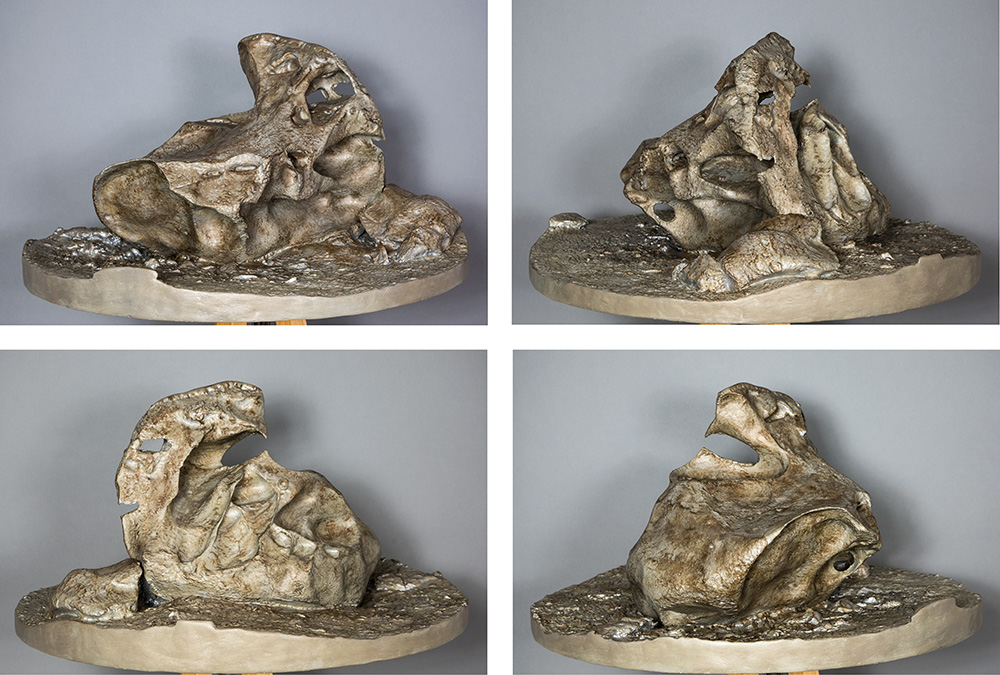 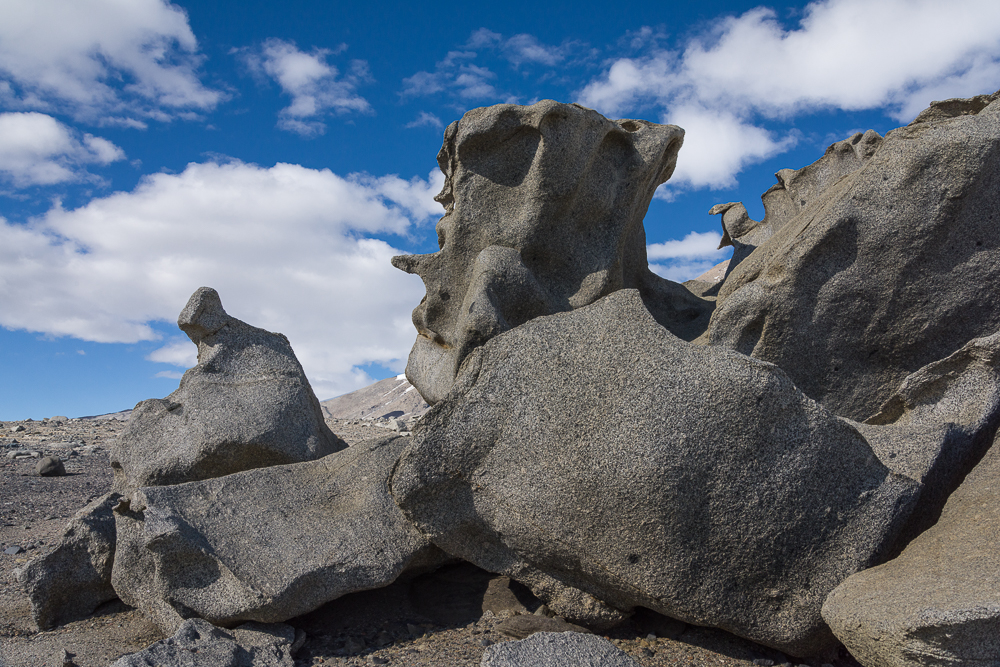 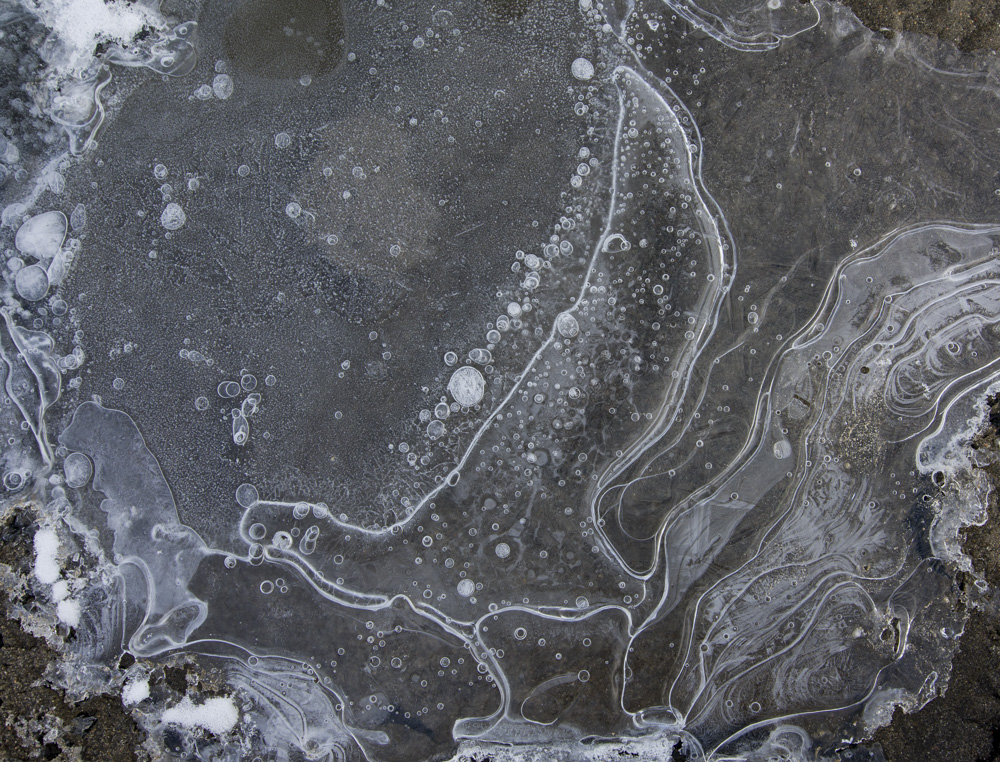 ©Helen Glazer, “Skua,” Lake Hoare 17 x 22.375 inches A thin layer of ice etched with a delicate design resembling the profile of a skua, the only bird occasionally seen in the Dry Valleys. One of many such small-scale designs I photographed that had formed on top of sediment blown onto the permanently frozen surface of Lake Hoare. 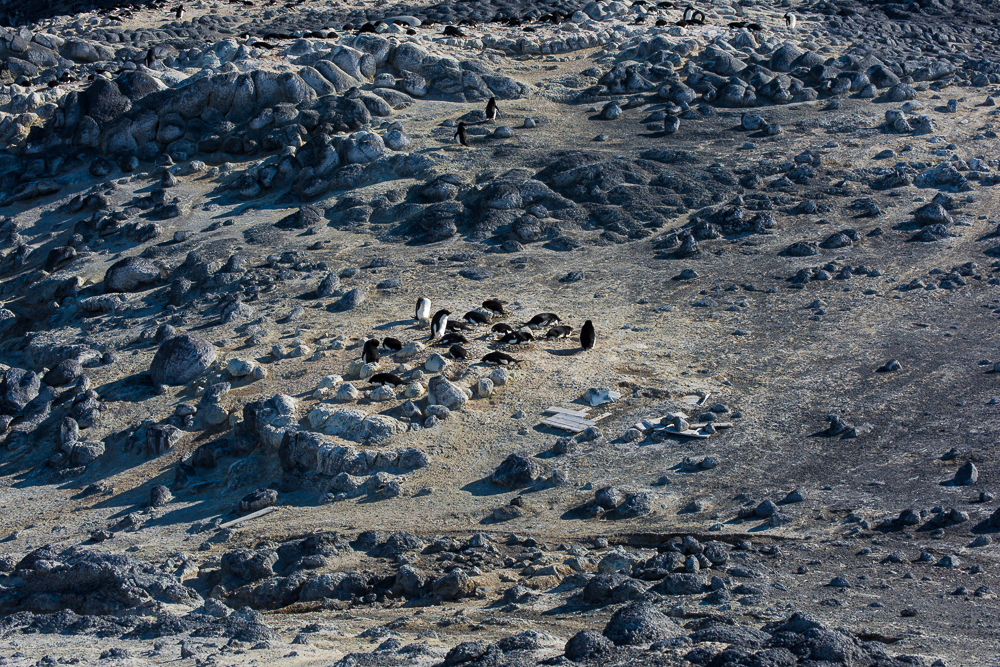 ©Helen Glazer, Penguin Subcolonies, Cape Royds 14.75 x 22 inches Adélie penguins nest in groups called subcolonies. What look like walls left by an ancient civilization are natural volcanic formations. The tan color is, as one researcher put it to me, “10,000 years of penguin poop.” The boards are probably remnants left behind by British explorers in Ernest Shackleton’s expedition in the 1910s. There are no organisms to decompose wood in Antarctica so it just weathers. Everything outdoors that the explorers left behind, even broken bottles or bones from their meals, is deliberately left untouched. 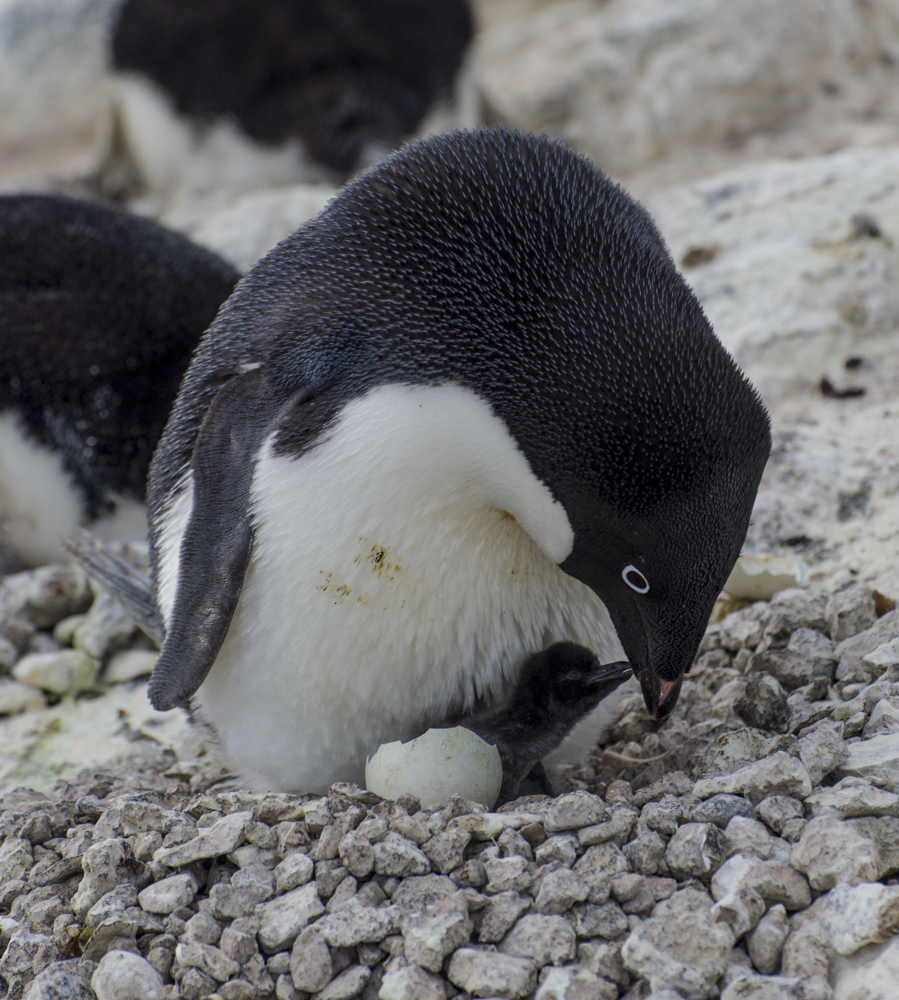 ©Helen Glazer, First Chick of the Season, Cape Royds 21.5 x 22.25 inches I spent several hours one raw and windy day looking for penguin chicks at the Cape Royds penguin colony research site. No chicks had been spotted yet that season. I heard peeping and turned around, set my tripod down, and shot still photos and video for about three minutes as the parent penguin fed the chick, then settled gently back on top of it.