For the next few weeks, I will be sharing work that seen at PhotoNOLA….
Photographer Ben Marcin was born in Augsburg, Germany which might explain his nod to creating typologies that have their roots in Bernd and Hilla Bechers’ territory.  Ben has a number of interesting series, two featured today–Last House Standing and Camps, that  explore the ideas of shelter and home. Ben is interested in “the places where people live and interface, directly or indirectly” He moved to Baltimore as a child and bought his first camera at Sears at twenty-seven and is a self taught photographer.  His work has been shown at a number of national galleries and venues including the Delaware Museum of Art; The Center For Fine Art Photography in Ft. Collins, CO; Maryland Institute College of Art’s Middendorf and Meyerhoff Galleries; and the former Gomez Gallery in Baltimore.
Last House Standing

One of the architectural quirks of certain cities on the eastern seaboard of the U.S. is the solo row house. Standing alone, in some of the worst neighborhoods, these nineteenth century structures were once attached to similar row houses that made up entire city blocks. Time and major demographic changes have resulted in the decay and demolition of many such blocks of row houses. Occasionally, one house is spared – literally cut off from its neighbors and left to the elements with whatever time it has left. 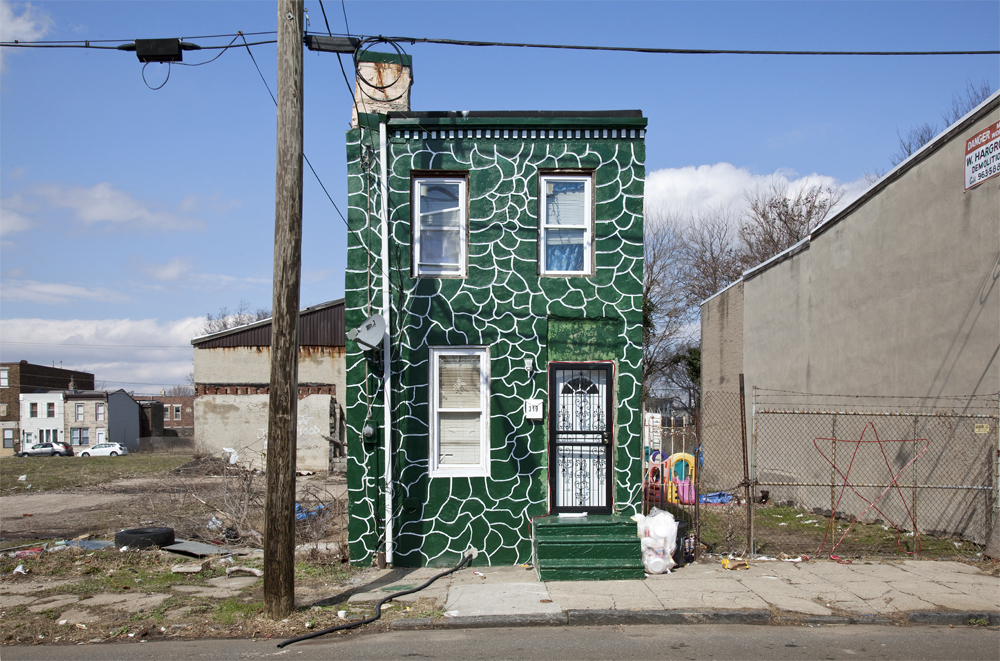 My interest in these solitary buildings is not only in their ghostly beauty but in their odd placement in the urban landscape. Often three stories high, they were clearly not designed to stand alone like this. Many details that might not be noticed in a homogenous row of twenty attached row houses suddenly become apparent when everything else has been torn down. And then there’s the lingering question of why a single row house was allowed to remain upright. Still retaining traces of its former glory, it is often still occupied. One morning, while photographing what I thought was an abandoned solo row house, the front door swung open and an older man wearing a bath robe and jeans walked out and confronted me. Was I from the city, he wanted to know, ready to defend his narrow piece of turf. At that moment, I understood why this row house was still standing. 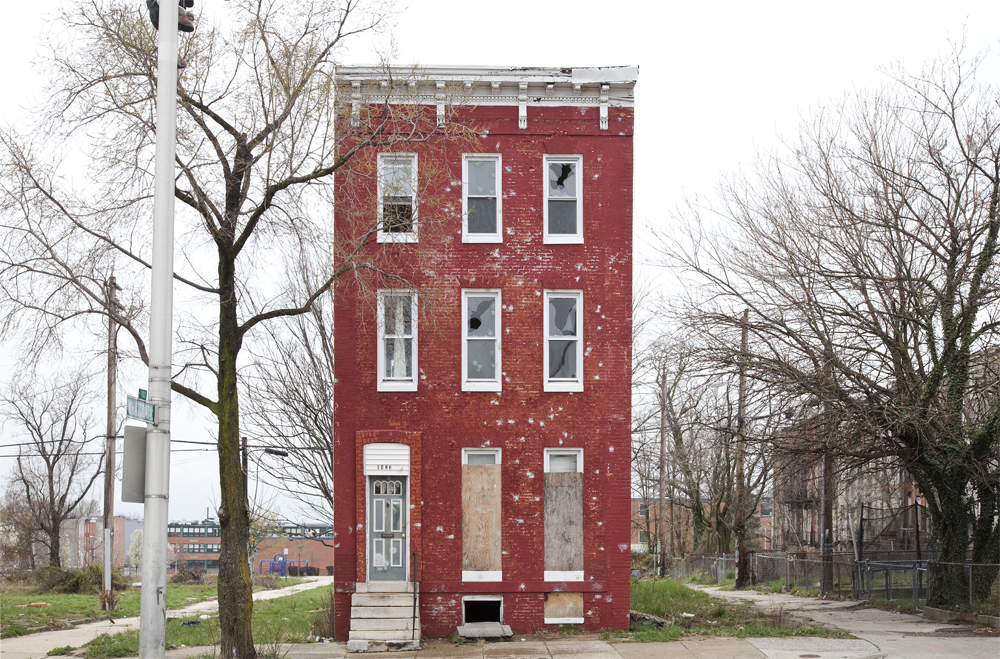 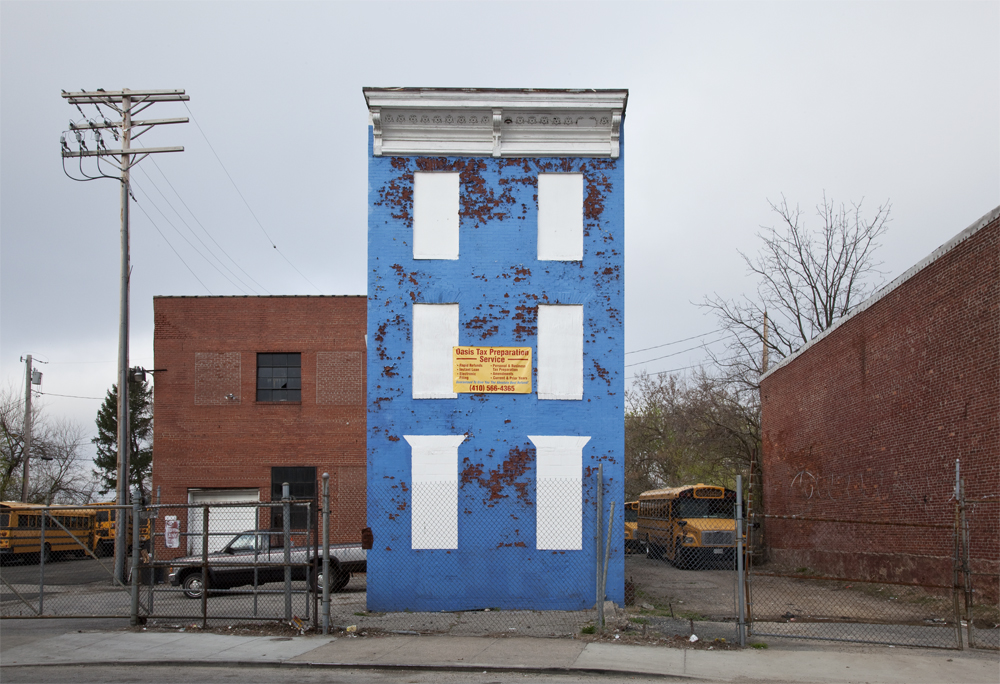 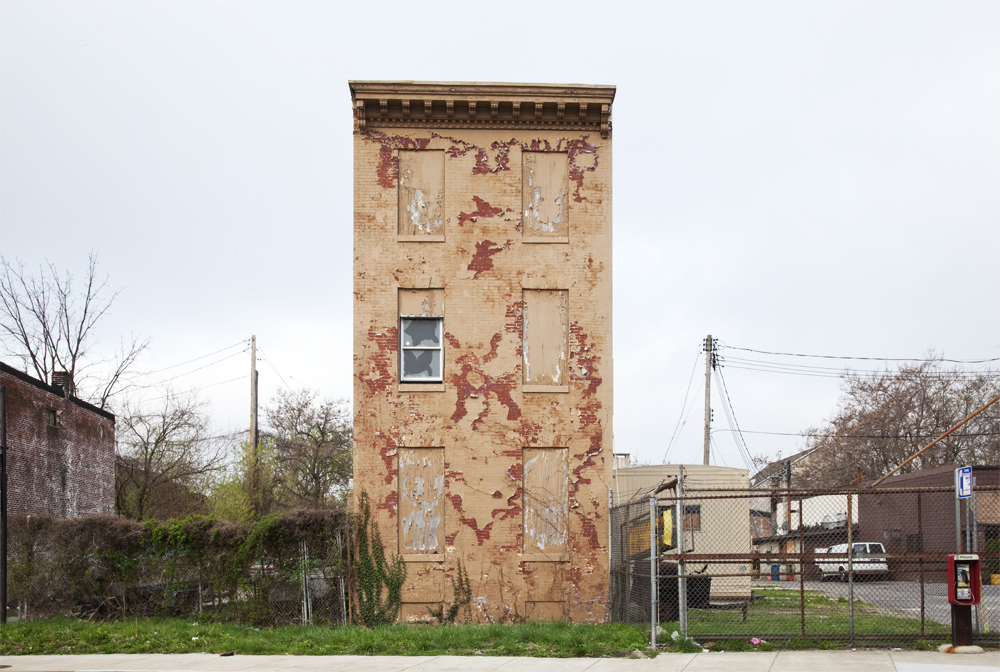 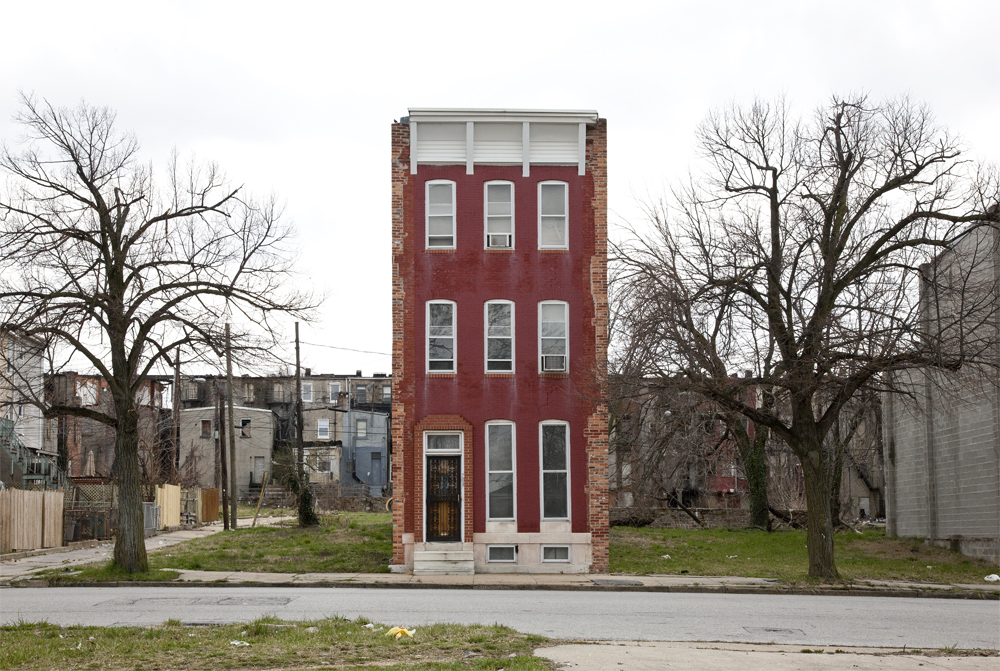 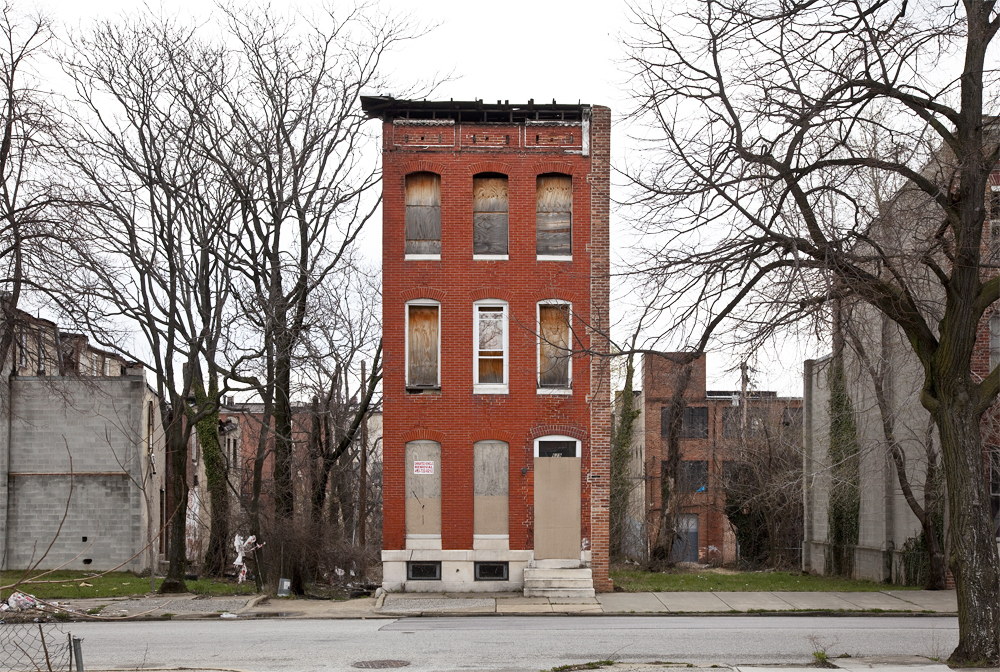 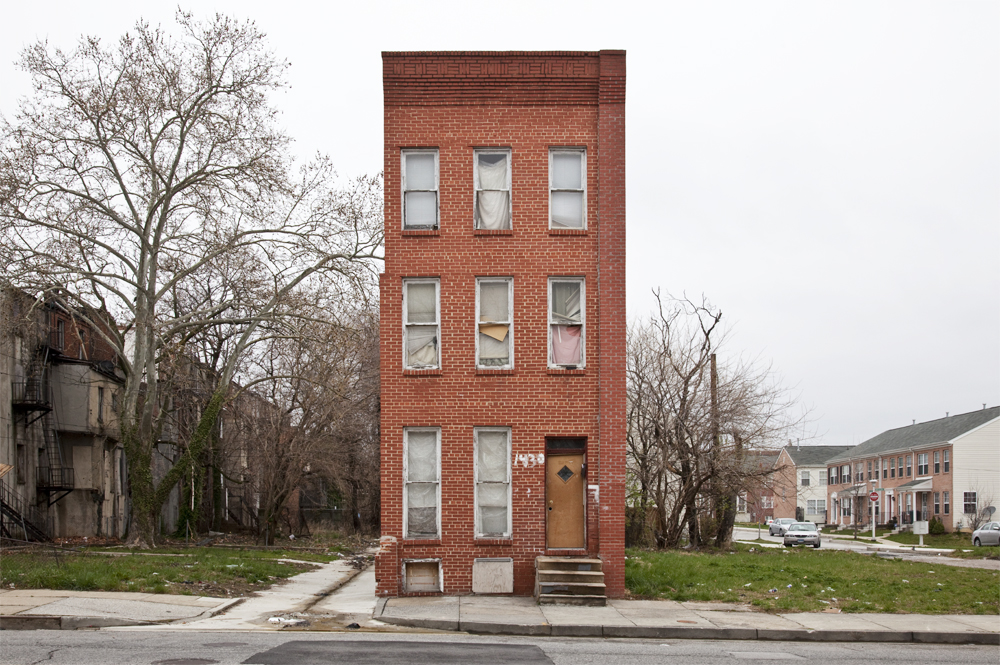 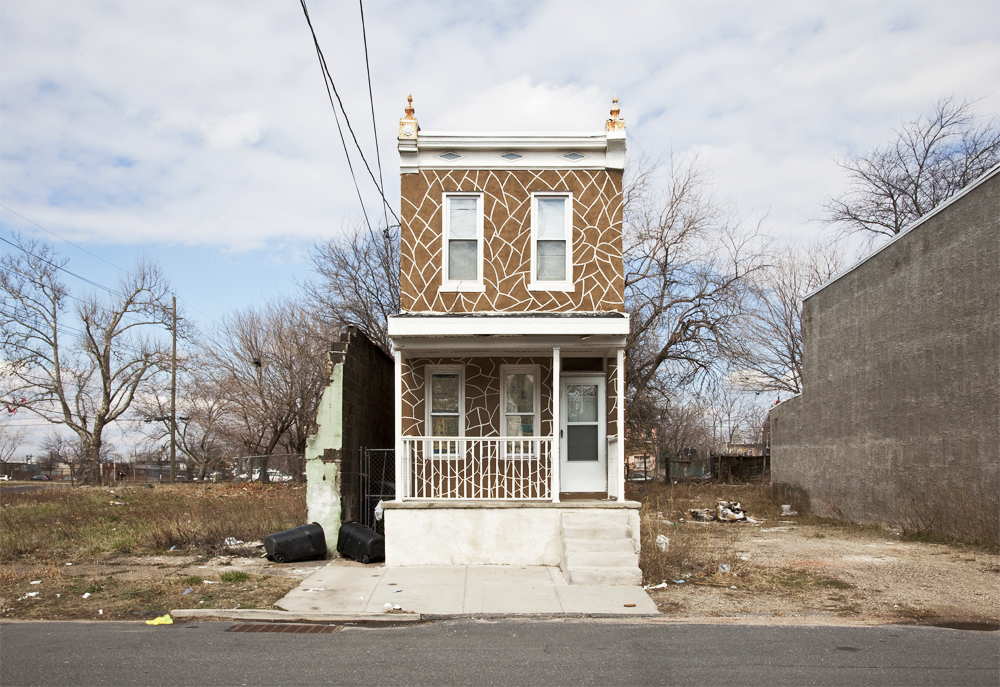 I have always had an interest in photographing the places where people live, especially solitary houses that exist apart from other structures. A couple of years ago, I began to photograph the homeless camps in Baltimore when I started bumping into them during hunting season. Once the hunters begin to show up in the forest, I retreat and tighten up my adventures on foot to areas closer to the suburbs and industrial parks around Baltimore. As development has encroached on whatever woods is left in these areas, I found myself practically stepping into a number of homeless camps that were carefully hidden among strips of trees or bushes running along highways or behind shopping centers. I became fascinated not only at the effort that these folks went to in order to remain hidden in plain sight but also at their creativity. No two camps are alike. They run the gamut from being completely exposed under bridges or fallen trees to semi-massive structures carefully constructed out of milk crates or wooden doors. 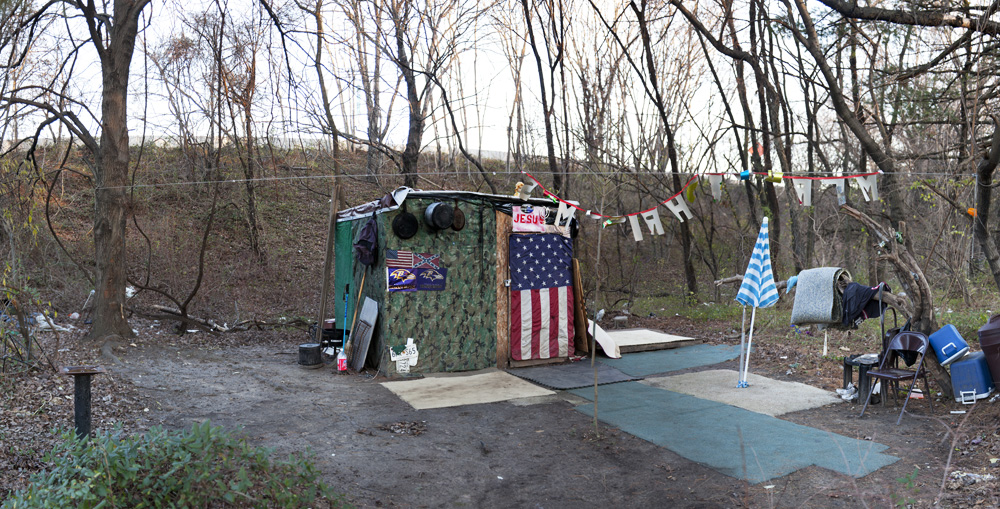 What turns in fate or life decisions led to this opposite end of the “One Percent”? More than one resident told me that living in a tent was a personal choice – yet it always seemed to me that there was no other choice. Even more than the solitary houses that I’ve documented, the homeless camps directly allude to the life trajectories of their owners. All of the camps shown here were photographed in and around Baltimore, Maryland. None of them remain today. 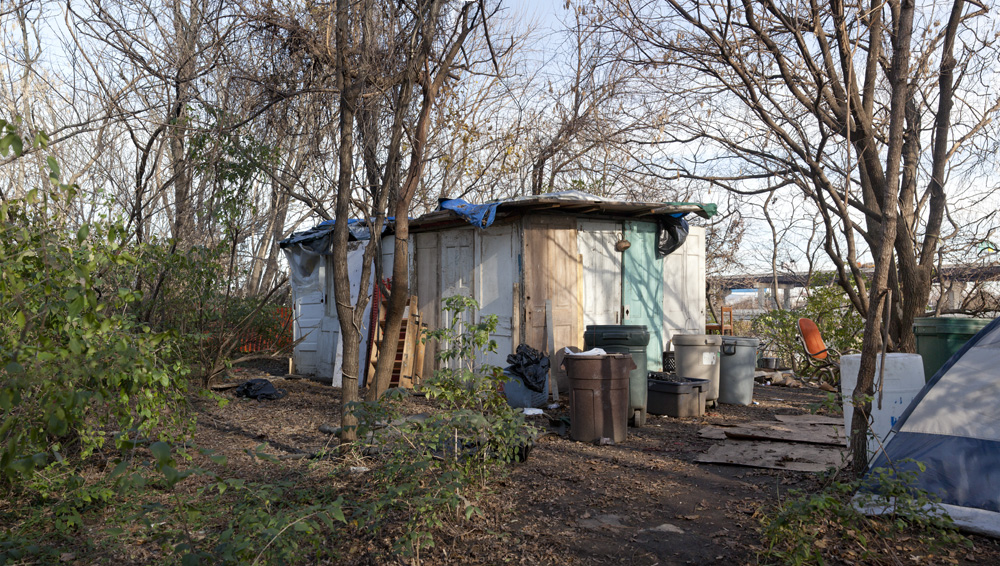 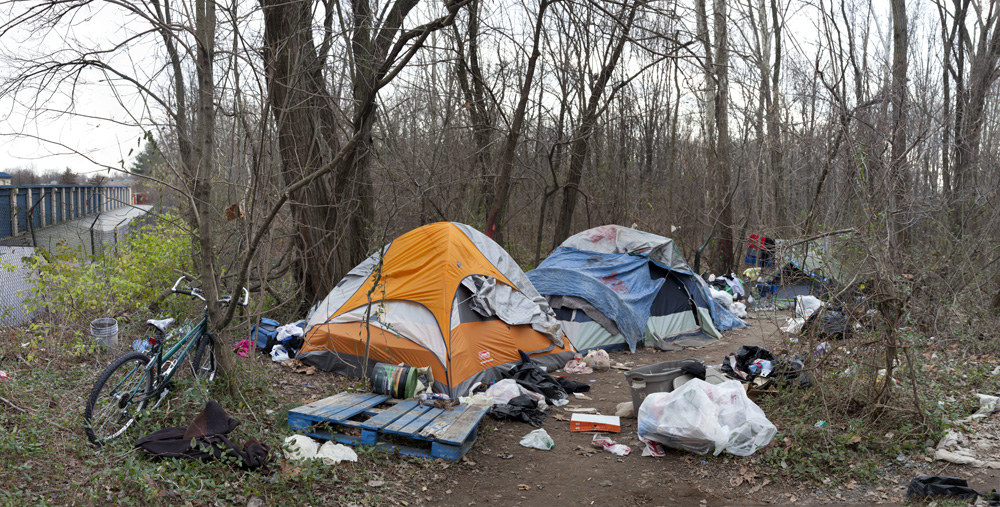 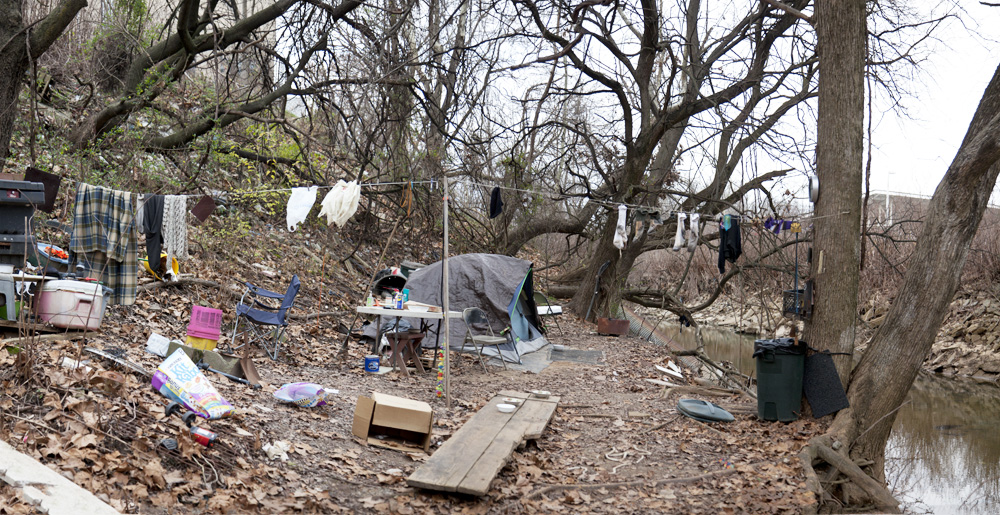 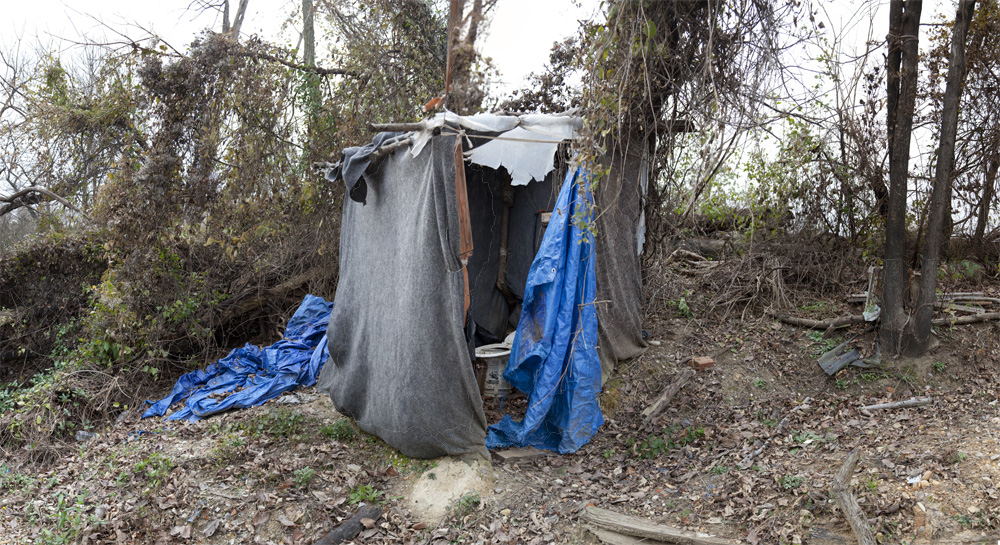