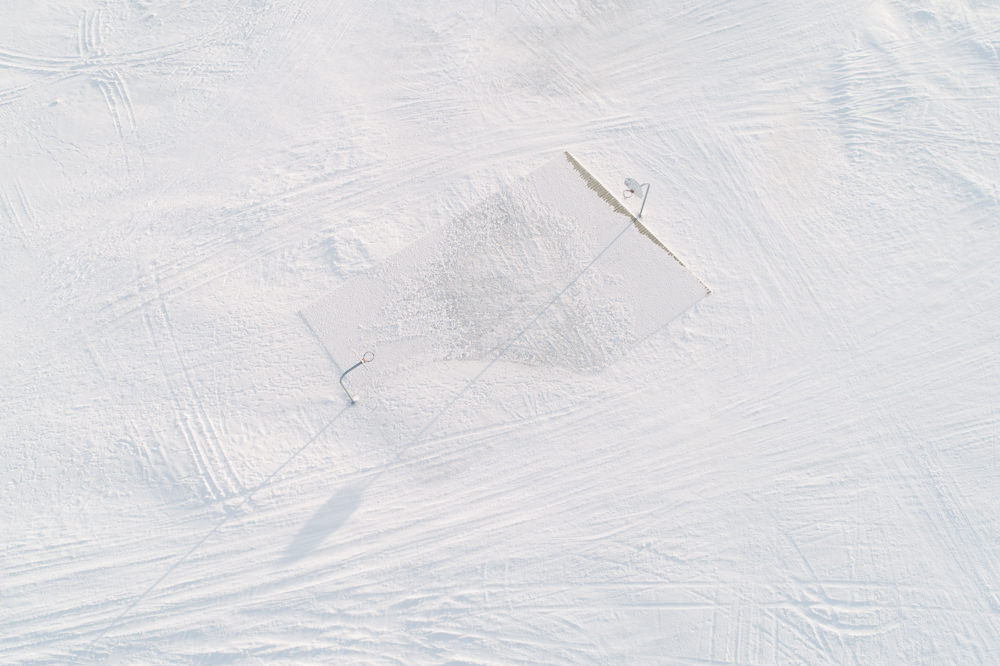 A basketball court sits empty in the village of Gambell, Alaska. For many youth, the recent suicide of a friend who loved the game has kept them away from the court. ©Kiliii Yuyan

Photographer Kiliii Yuyan illuminates the hidden stories of Polar Regions, wilderness and Indigenous communities. Informed by ancestry that is both Nanai/Hèzhé (Siberian Native) and Chinese-American, he explores the human relationship to the natural world from different cultural perspectives.

In his series Masks of Grief and Joy, Yuyan takes the viewer to Gambell, located on the northwest cape of St. Lawrence Island in the Bering Sea, about 200 miles southwest of Nome and just 36 miles from the Chukchi Peninsula in the Russian Far East.

Death is not uncommon here on Alaska’s Saint Lawrence Island, whose population is entirely Siberian Yup’ik. The people of Saint Lawrence Island have been ravaged by colonization. In the 1800s American commercial whalers brought disease epidemics, followed by the 1900s when children were forced to leave their parents and attend boarding schools. An entire generation was subjected to the physical/sexual abuse and cultural genocide of those schools. The ensuing trauma has led Alaska Natives to the highest rate of youth suicide in the world  – 13 times higher than that of American youth overall.

Molly comes running up to me, snow crunching under her feet as she giggles and tries to catch her breath. The two of us are standing in moonlit snow on an island in the middle of the Bering Sea. It’s Molly’s home. We joke around for a few minutes when she suddenly bursts into nostalgia about her best friend Robert.

Robert’s dad used to push the kids around the house in suitcases. They’d stare at each other and burst into laughter. As Molly tells me this childhood story, her eyes begin to glisten. She tells me Robert’s father was like a surrogate dad. They would go out on the land for weeks. He’d never let anybody in the village pick on her. The three of them were inseparable.

But then she pauses, and after a long while, she tells me in a faltering voice that Robert had killed himself, and his dad had died from a heart attack shortly after.

When Yuyan arrived in Gambell, one of the island’s two communities in 2018 with about 700 residents, he took on the task of creating a suicide-prevention program, in collaboration with the art teacher and staff at the Gambell school, as a form of art therapy for the students.  One of the first activities was for the student to create papier-mâché masks. Arctic Indigenous cultures such as the Yup’ik are famously laconic, so this mask-making activity was designed as a socially acceptable way for teenagers to work through suppressed emotions. He asked the students to work on two masks: one representing their internal grief, the other representing their joy. He worked with his students for three weeks, taking cues from both traditional Yup’ik masks and references to pop culture.

The artist’s made portraits of the students wearing their masks in places that brought them closer to their grief and their joys. For grief, several students led him outside. He went to a basketball court, a reminder of a well-loved fellow student and basketball player who they said had recently committed suicide. Standing in that place, Yuyan could feel the pain carried by the students, as well as their fortitude in facing it.  Most of the students wore their grief mask outside and their joy mask inside the comfort of their home.

During their time together, the students reflected on suicide in their community and how it had affected them. It was clear that it affected just about everyone, but there were also deaths from cancer and accidents as well. Despite all of the tragic losses, most of the students seemed to have a healthy approach to life. Their strength stands proves that despite centuries of ongoing trauma, Indigenous communities will continue to heal with each generation by earning to believe in themselves and preparing a way for their communities into a new era.

When I look at these images what is apparent to me is the resilience of the individuals who аre wearing them and the compassion with which the pictures are made.  As the world struggles in 2020 to find even a shred of empathy or humanity, we find both here.

Kiliii is in support of niatero.org, an indigenous group dedicated to conservation. 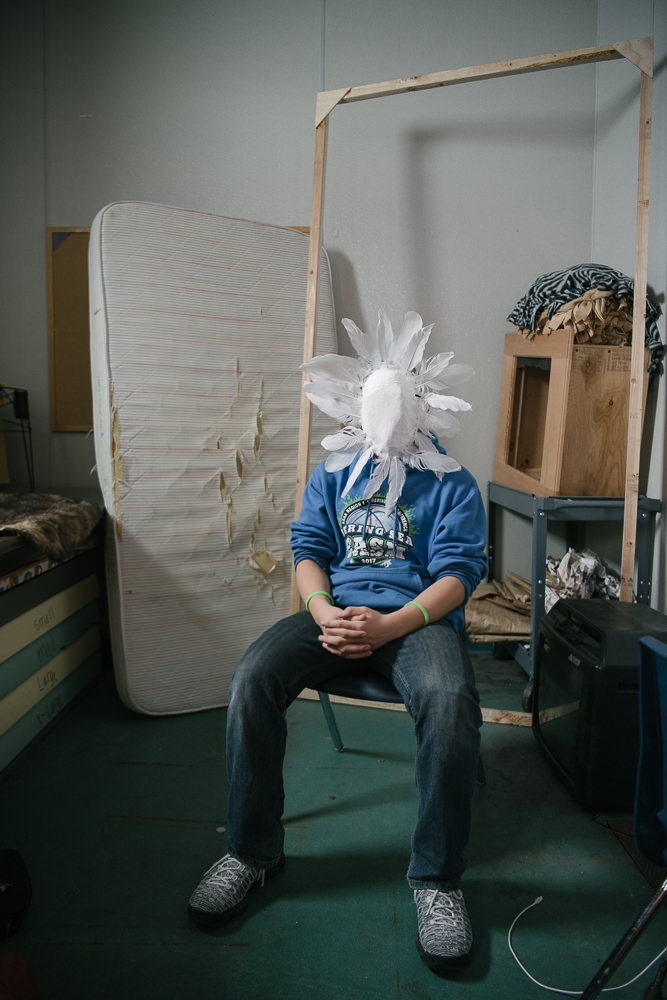 Photographer Kiliii Yuyan illuminates the hidden stories of Polar Regions, wilderness and Indigenous communities. Informed by ancestry that is both Nanai/Hèzhé (Siberian Native) and Chinese-American, he explores the human relationship to the natural world from different cultural perspectives. Kiliii is an award-winning contributor to National Geographic Magazine and other major publications.

Both wilderness survival skills and empathy have been critical for Kiliii’s projects in extreme environments and cultures outside his own. On assignment, he has fled collapsing sea ice, weathered botulism from fermented whale blood, and found kinship at the edges of the world. In addition, Kiliii builds traditional kayaks and contributes to the revitalization of northern Indigenous culture.

Kiliii is a 2020 NiaTero Storytelling fellow, Pulitzer Center grantee, and one of PDN’s 30 Emerging Photographers (2019). His work has been exhibited worldwide and received some of photography’s top honors. Kiliii’s public talks inspire others about photography, Indigenous perspectives and wilderness around the globe. Kiliii is based out of Seattle, but can be found across the circumpolar Arctic much of the year. 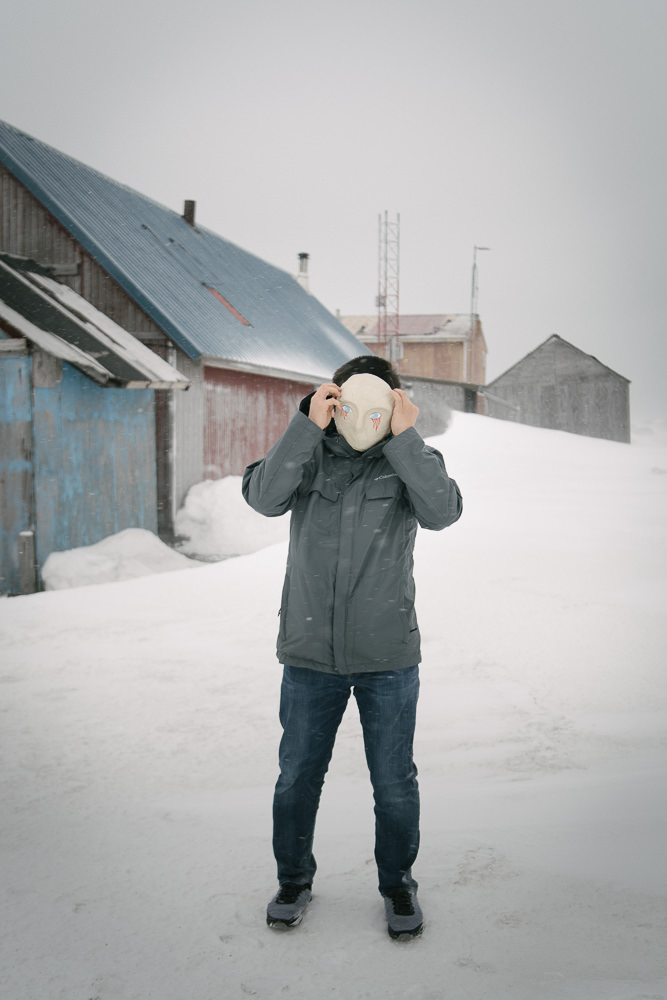 Reflecting on the grief in his life from losing a good friend to suicide, BK removes his grief mask to breathe easier. April 13, 2018, Gambell, AK. ©Kiliii Yuyan 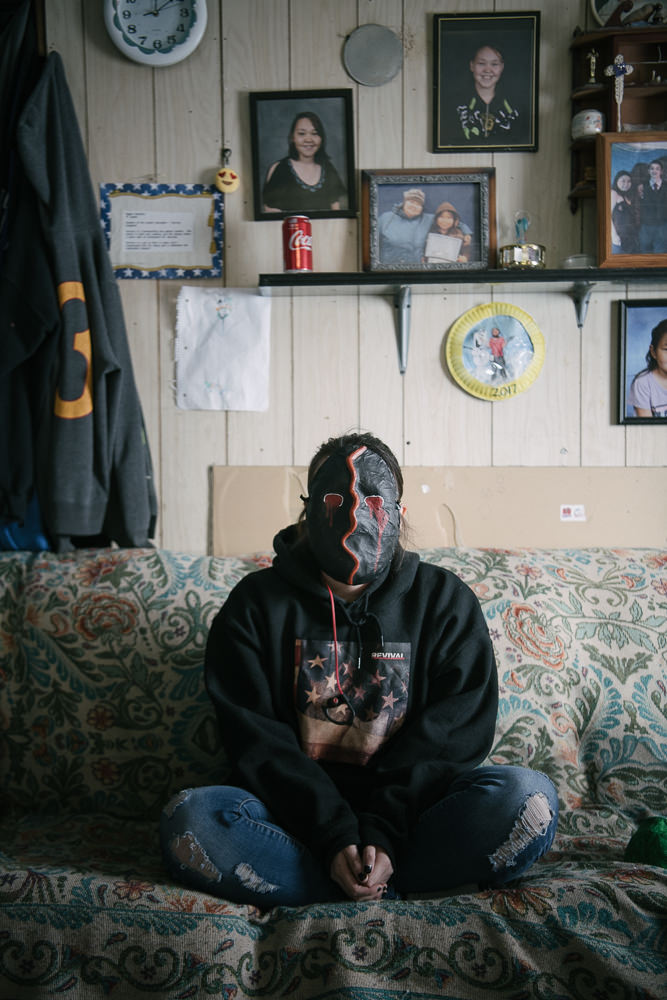 LA reflects on family and loss at home in her mask of grief. Though her family has more than most, she is not insulated from the near-constant stream of deaths in the community, from cancer to suicide. April 12, 2018, Gambell, AK. ©Kiliii Yuyan

My vision was to make portraits of the students wearing their masks in places that brought them closer to their griefs and their joys. For grief, several students led me outside. We went to a basketball court, a reminder of a well-loved fellow student and basketball player who they said had recently committed suicide. Standing in that place, I could feel the pain carried by the students, as well as their fortitude in facing that pain.

During our time together, I asked the students to reflect on suicide in their community and how it had affected them. It was clear that it affected just about everyone, but there were also deaths from cancer and accidents as well. Despite all this tragic loss, most of the students seemed to have a healthy approach to life. Their resilience reminded me that, despite centuries of ongoing trauma, Indigenous communities will continue to heal with each generation. 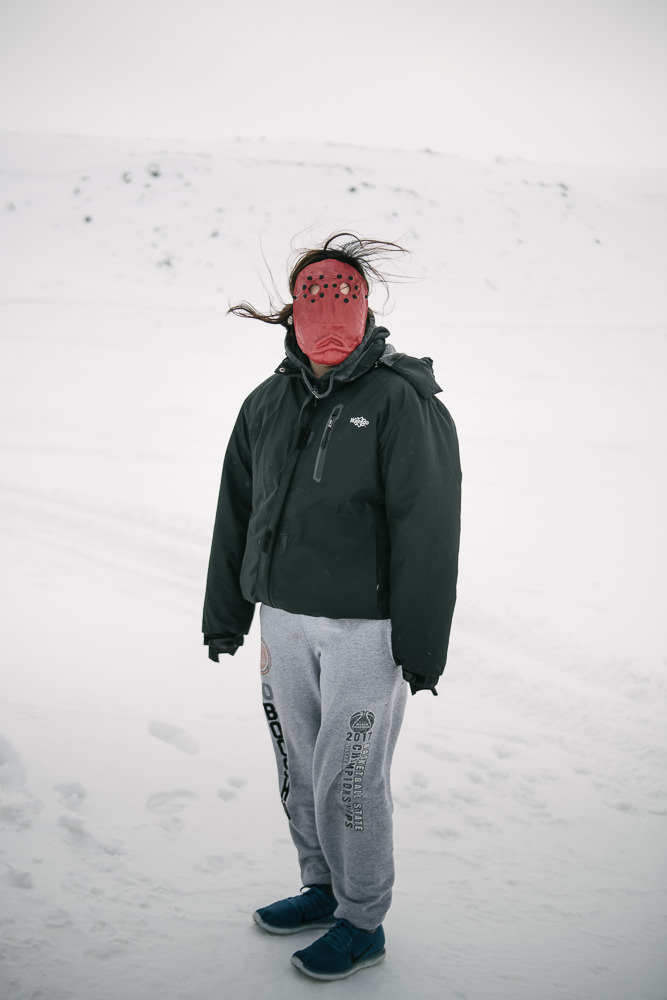 MB wears her mask of grief a few steps from family’s front door. She lost her father to suicide last year, yet upon meeting in person, her resilience is evident in her energy and vibrance. April 12, 2018, Gambell, AK. ©Kiliii Yuyan 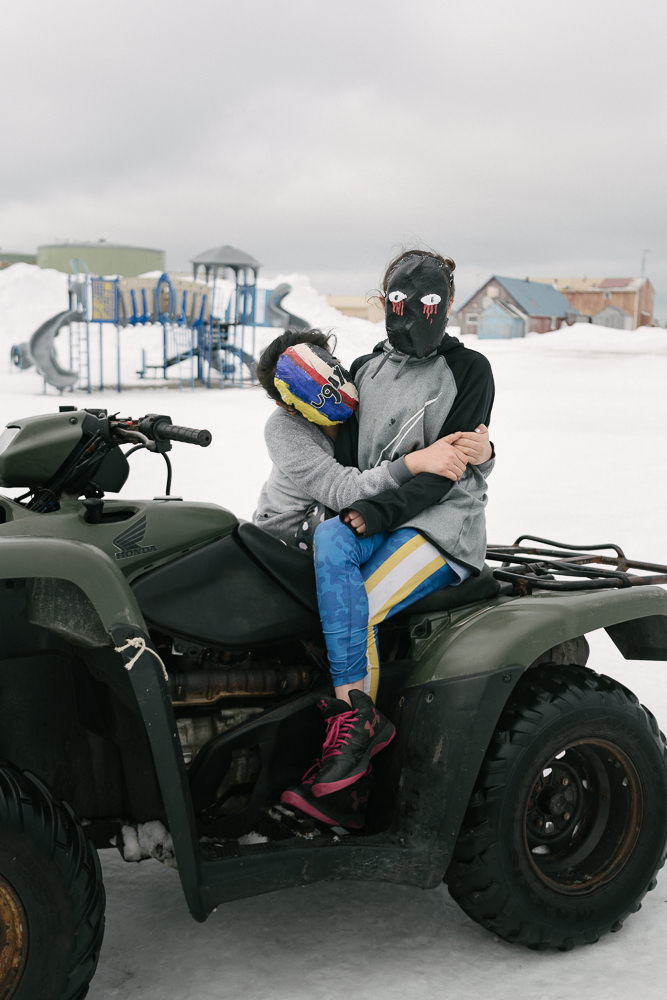 KO and her best friend, DS, a few steps from school. KO is considered a problem student and often acts out with great drama in class. Gambell’s school counselor believes behavioral problems with students of DO’s age are expressions of dealing with the emotional unavailability of parents that survived Indian boarding schools. April 11 2018, Gambell, AK. ©Kiliii Yuyan 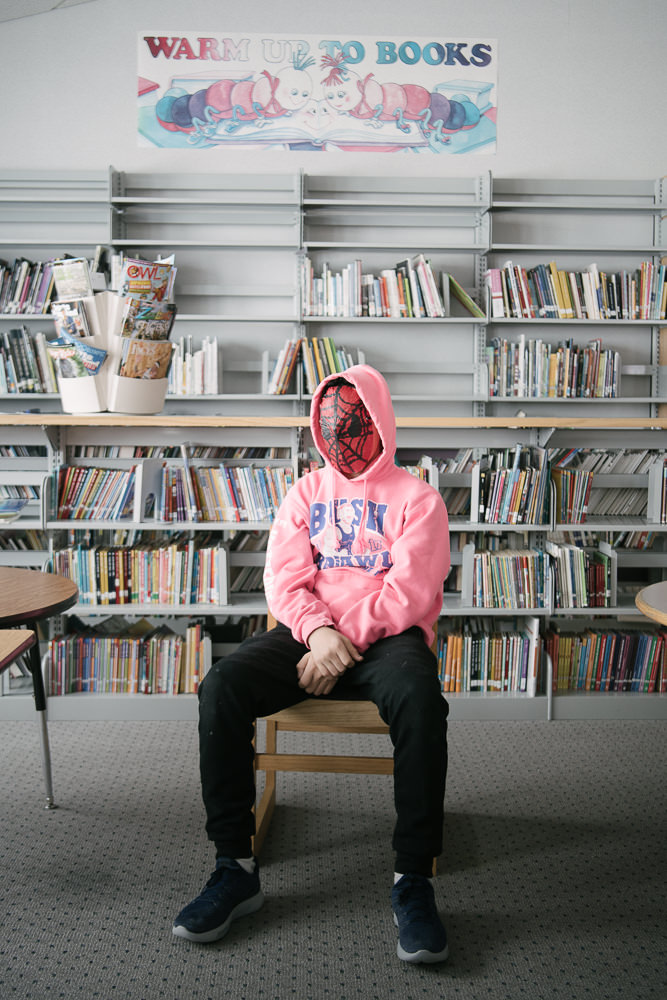 AB poses with his hope mask at the Gambell School Library. Globalization has brought Western popular culture to Saint Lawrence Island through television and internet, offering glimpses of another world while denying access to that world. April 12, 2018, Gambell, AK. ©Kiliii Yuyan 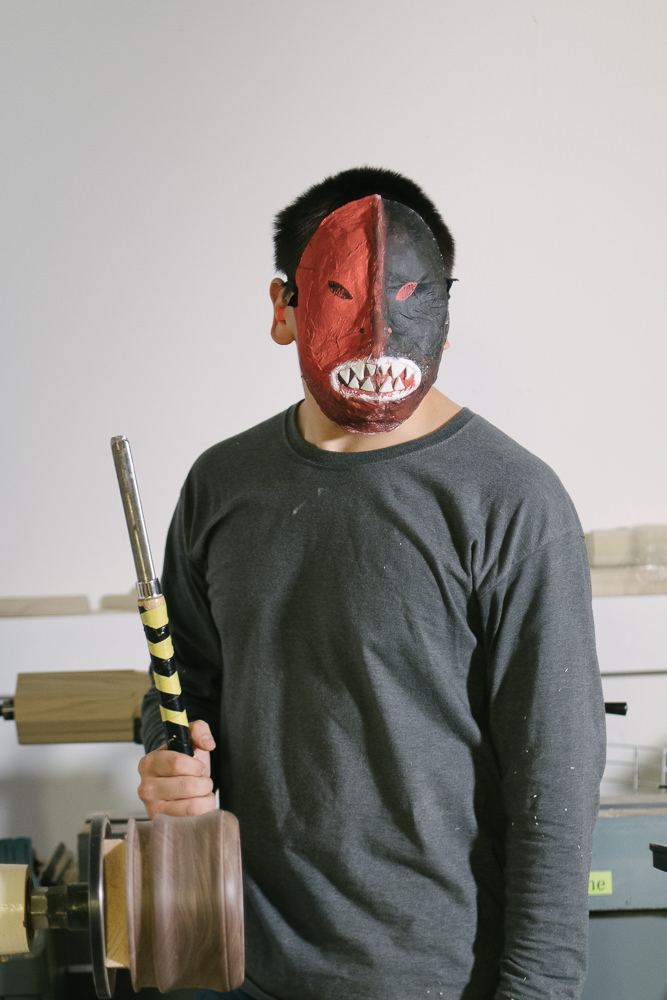 BK wears a fierce mask that is his interpretation of hope and strength. Holding a chisel in his school’s shop class, he hopes that occupational training will help him to land a good job when he graduates. ©Kiliii Yuyan 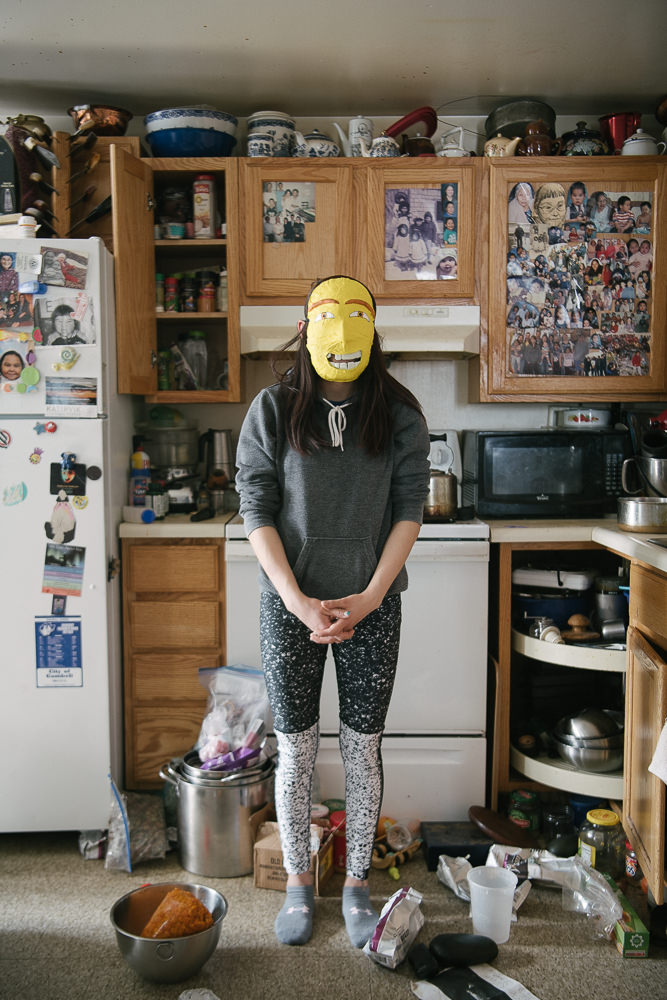 IK feels a sense of relief when she is at home with her family. She wears her hope mask in the family kitchen, where so many of her joyful memories come from. ©Kiliii Yuyan 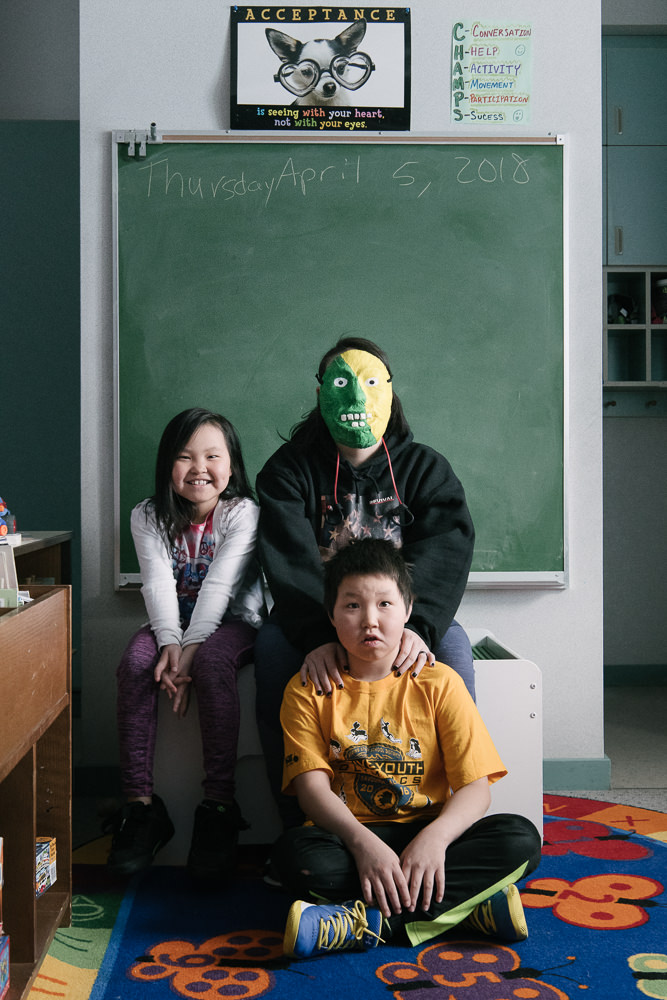 LA poses with her two younger siblings in the classroom. For LA, who often takes care of her brothers and sisters, a sense of responsibility to them keeps her mind clear. “If I was gone, who would watch out for them?” April 11, 2018, Gambell, AK. ©Kiliii Yuyan 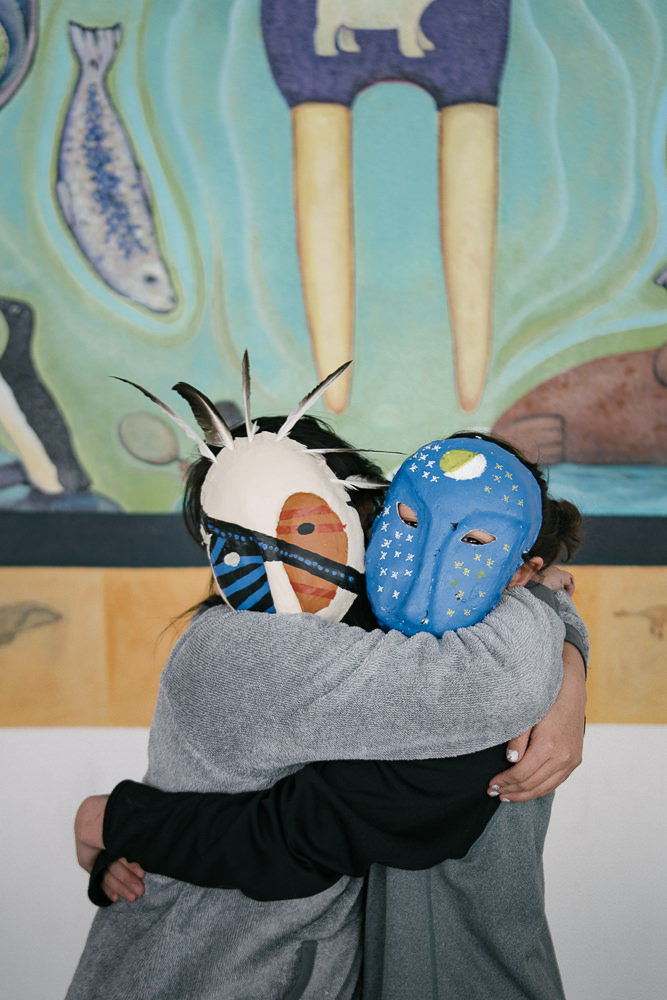 KO embraces DS at the Gambell School. At 13, they have not personally known any suicide victims, though their families are deeply affected– a hopeful sign of change in the community. ©Kiliii Yuyan 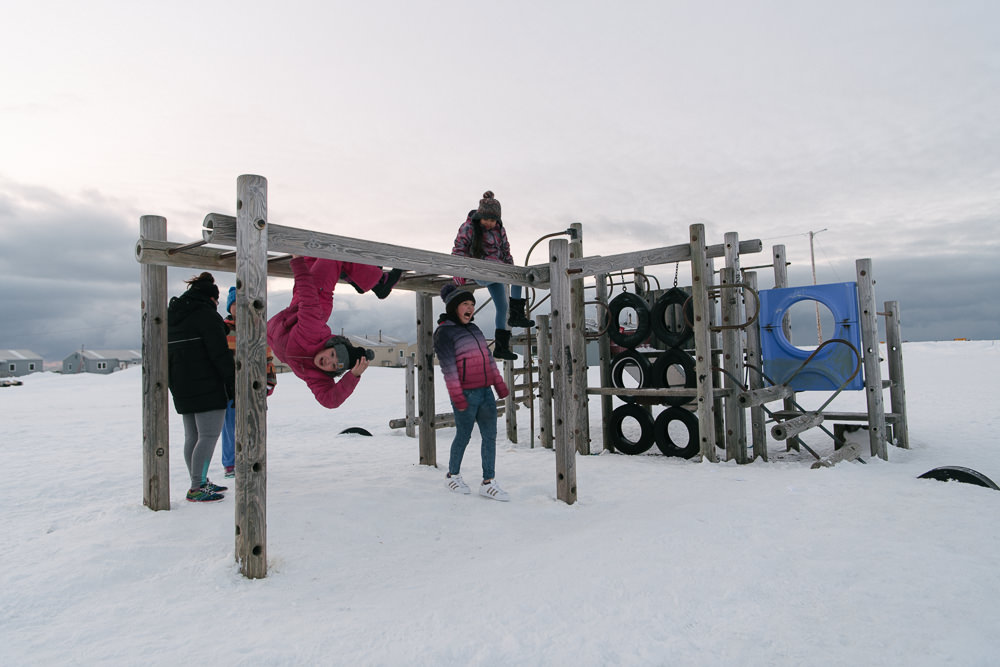 Kids play on a snowy playground in the light of Arctic spring. With each new generation, traumas of previous generations grow more distant, though they will face new challenges. ©Kiliii Yuyan 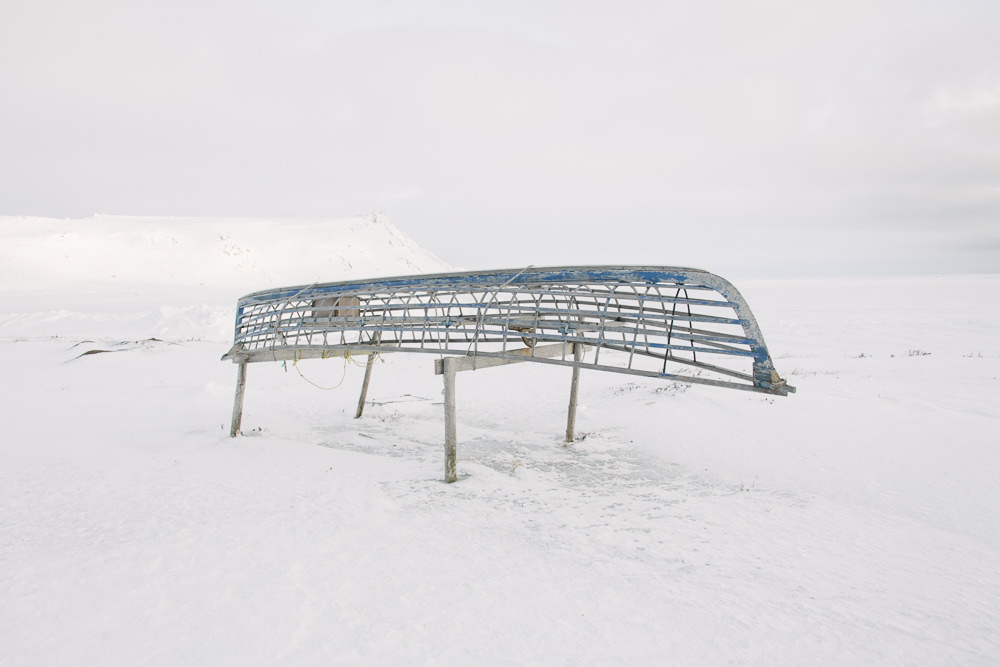 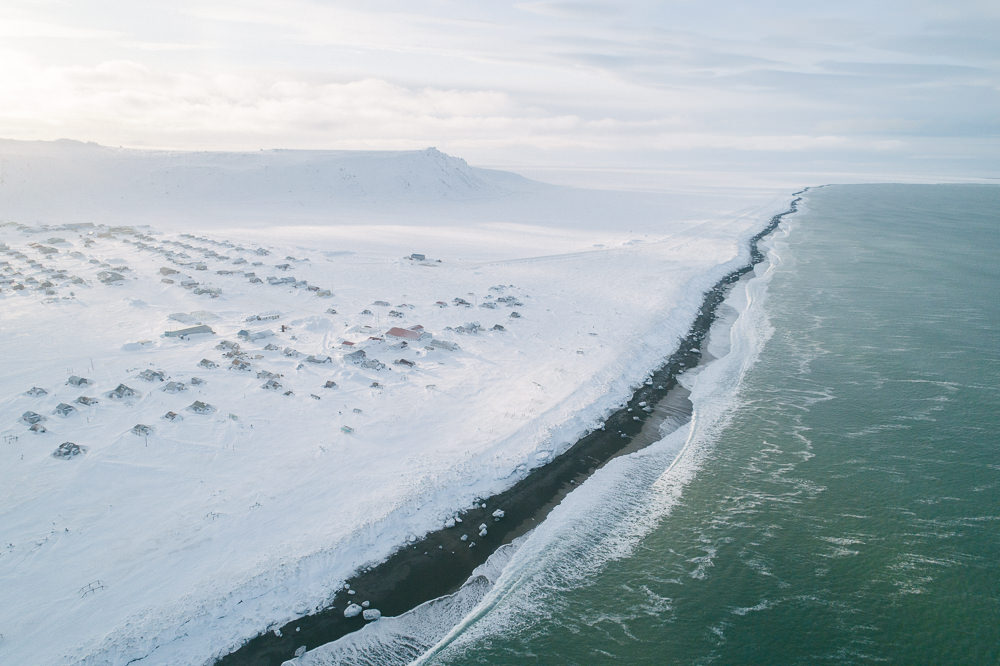 The village of Gambell lies on Saint Lawrence Island in Alaska, in the middle of the Bering Sea. Gambell is closer to Siberia than Alaska, but its remoteness has not insulated its indigenous Yup’ik population from the devastating effects of colonization. Alaska Native youth have a rate of suicide 18 times greater than that of the continental United States, with Yup’ik communities impacted the most. ©Kiliii Yuyan

National Center for Civil and Human Rights is a cultural institution and advocacy organization located in downtown Atlanta, Georgia. Powerful and immersive exhibits tell the story of the American Civil Rights Movement and connect this history to modern struggles for human rights around the world. The National Center for Civil and Human Rights has the distinction of being one of the only places to permanently display the papers and artifacts of Dr. Martin Luther King, Jr. Events, educational programs, and campaign initiatives bring together communities and prominent thought leaders on rights issues. For more information, visit civilandhumanrights.org and equaldignity.org. Also sign up for Campaign for Equal Dignity!
Join the conversation on @ctr4chr (Twitter), @ctr4chr (Facebook), and @ctr4chr (Instagram).