Dan Hojnacki: No Solid Body Is Lighter Than Air by Shawn BushMay 29, 2022 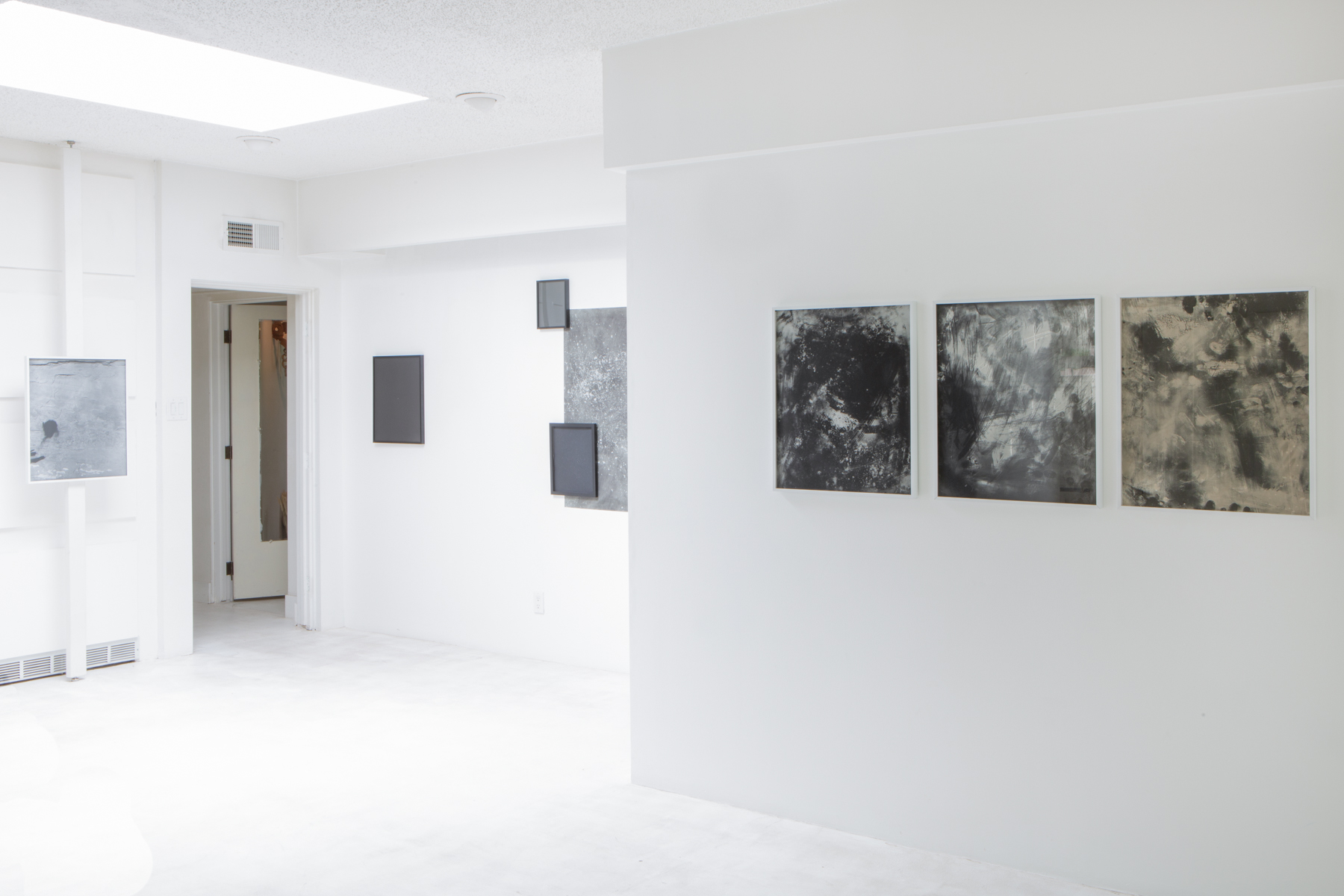 “No Solid Body is Lighter Than Air” Install

It was over ten years ago that I first met Daniel Hojnacki during my undergraduate education.  We were both photography majors and were in similar social circles but never truly got to know one another until years later when Dan began his MFA education at the University of New Mexico.  Over the three years that he has been in the program, I have witnessed so much growth within his practice, that builds off, honors and refers to his pre graduate school interests. His work is visceral and abstract in a manner that invites the viewer to consider themselves within the rectangular portals of his photographic output.  When one spends time with Dan’s work, they are rewarded with the experience of considering how one’s body relates to the universe at macro and micro levels as the textures and marks begin to revel their identity and position.

Daniel Hojnacki is currently an MFA candidate at the University of New Mexico (expected May 2022). Daniel’s experimental use of photography has recently led him to receive the Patrick Nagatani Photography Scholarship and The Phyllis Muth Arts Award in 2021. He has exhibited work at the Museum of Contemporary Photography and The Chicago Cultural Center. He has also hosted public workshops and lectures on his practice with the Museum of Contemporary Art in Chicago and the Smart Museum of Art. His work has been featured in Phases Magazine, Aint-Bad and Southwest Contemporary Magazine’s fall issue “Inhale/ Exhale”. 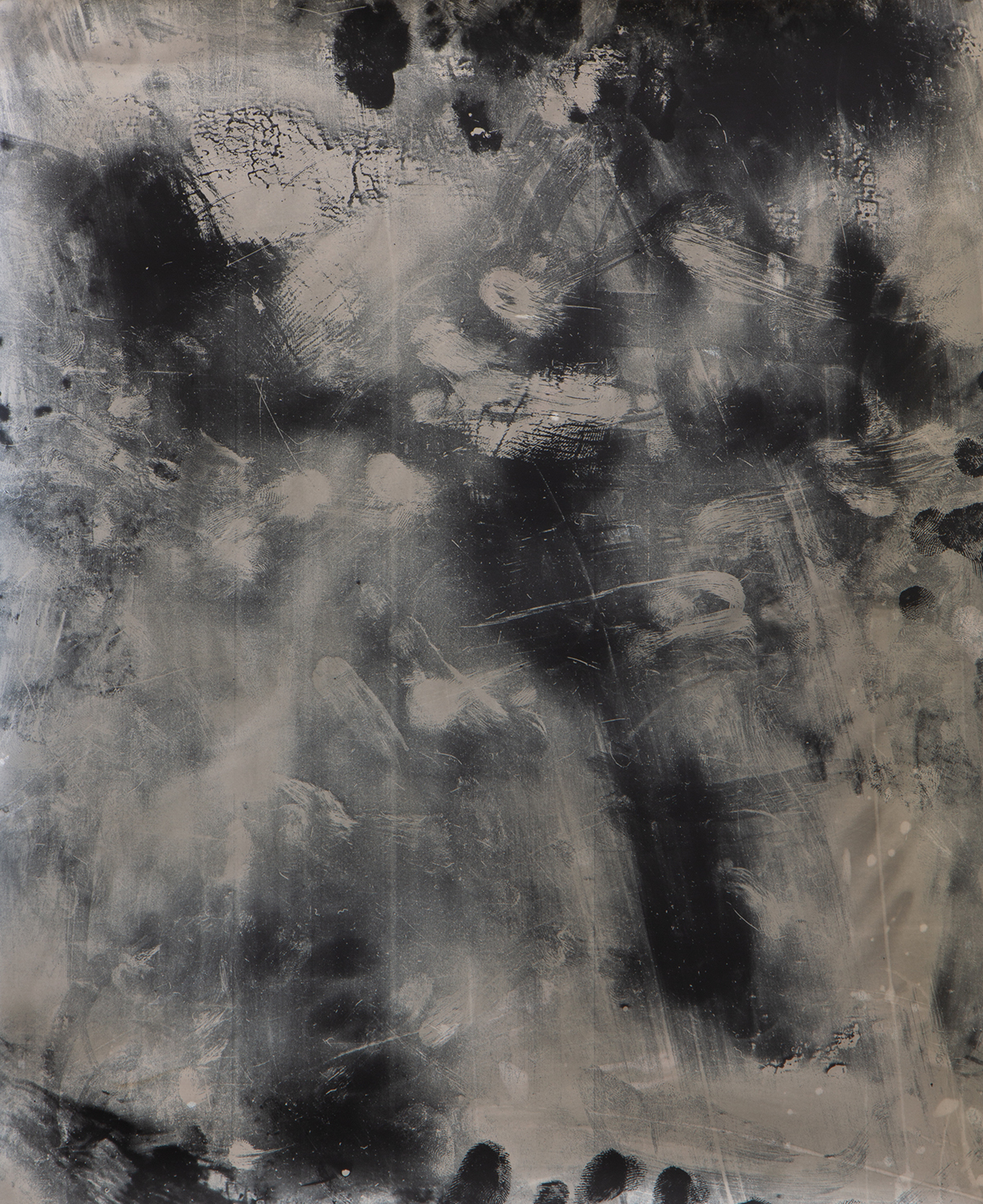 Congratulations on your current show No Solid Body Is Lighter Than Air up at birds + Richards Gallery in Albuquerque, NM. The installation looks beautiful and I really enjoy the variety of ways that you are showing the work. One aspect of your practice that I am drawn to is your sensibility to the materiality of the photographic surface and the variety of applications and materials that you use. Can you talk about how you make choices to use specific materials? Is that influenced by the visualization of how a final piece will look or more rooted in the conceptual weight of the material itself?

For this show I was really interested in material that created and elicited acts of suspension. I was thinking alot about the breath, dust and the cosmos as being tied to one another. I love when the photograph is able to transform something very mundane and small for the viewer. Allowing you to really look at a small speck of dust or the breath.

With an endless curiosity of seeing more than is expected of a material is what excites me. I am always concerned equally with how a material might look visually and its conceptual story and place. Although you may not know what it is you are looking at at first, the material has a story, a life to it. I use meteorite dust, my toenail mimicking a crescent moon, the soot of an oil lamp flame as the volatile substrate for some of the larger photograms. There has to be a little bit of curiosity from the viewer, a reciprocal relationship of wonder for the concept behind the material to be fully realized. I hope the titles for my works can lend a way to access that more. 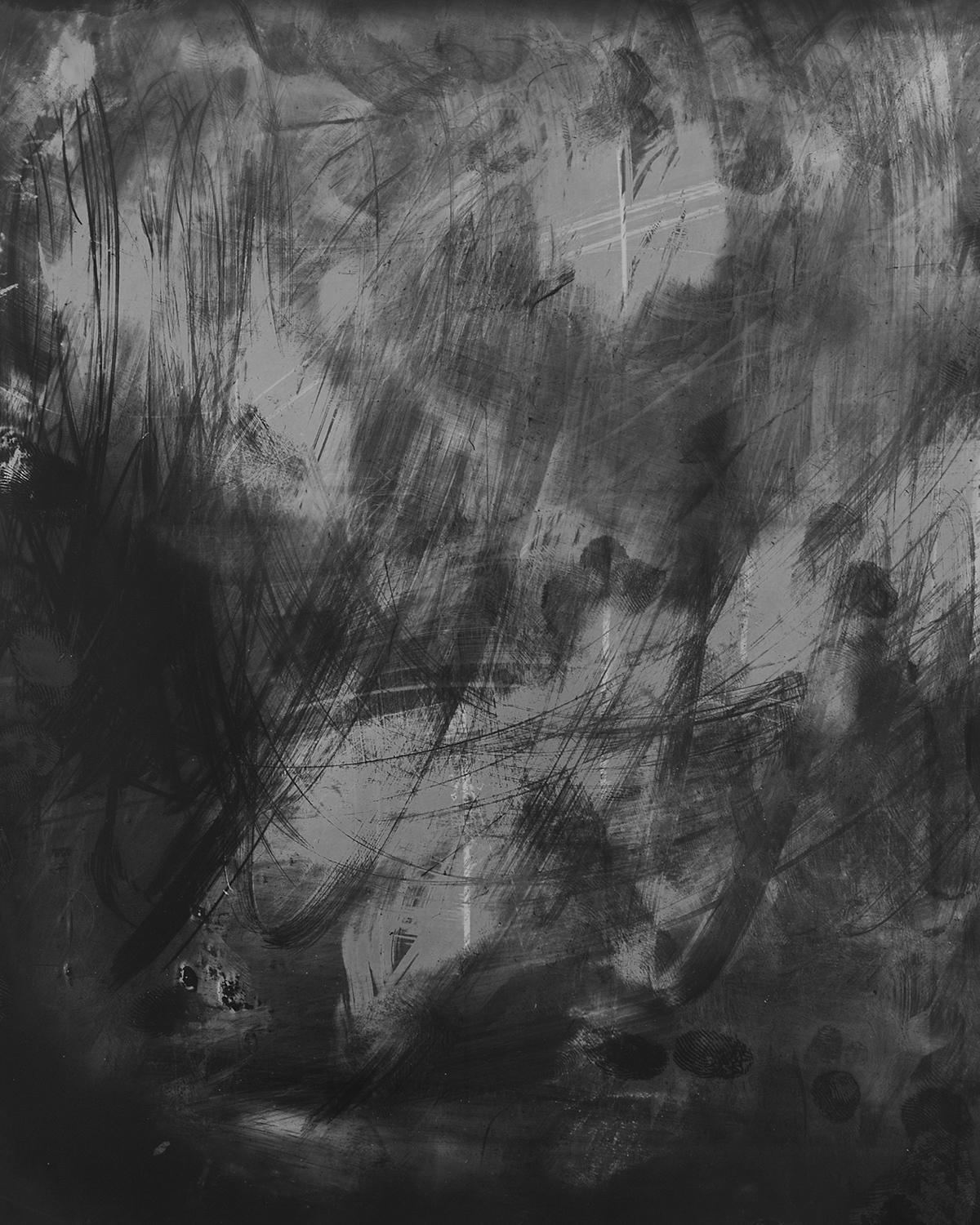 You are making connections between human existence on Earth, the stars and the universe in materials and bodies that have yet to be discovered or a mediation on the scale of human existence within the context of a larger universe?

Yes, all those things. Contemplating hovering here and how amazing it is that we are on a small speck of rock suspended in endless space, is I think a universal feeling for everyone at some point. A Lot of these works came from a state of learning meditation practices. Of finding the breath, interconnectedness, and being still. When you meditate, you become still and can quiet the mind. These works are reflections of that practice for me. There are similar particles found in deep space that are also in our teeth. So yes, there is certainly something connected between us here and what is out there. 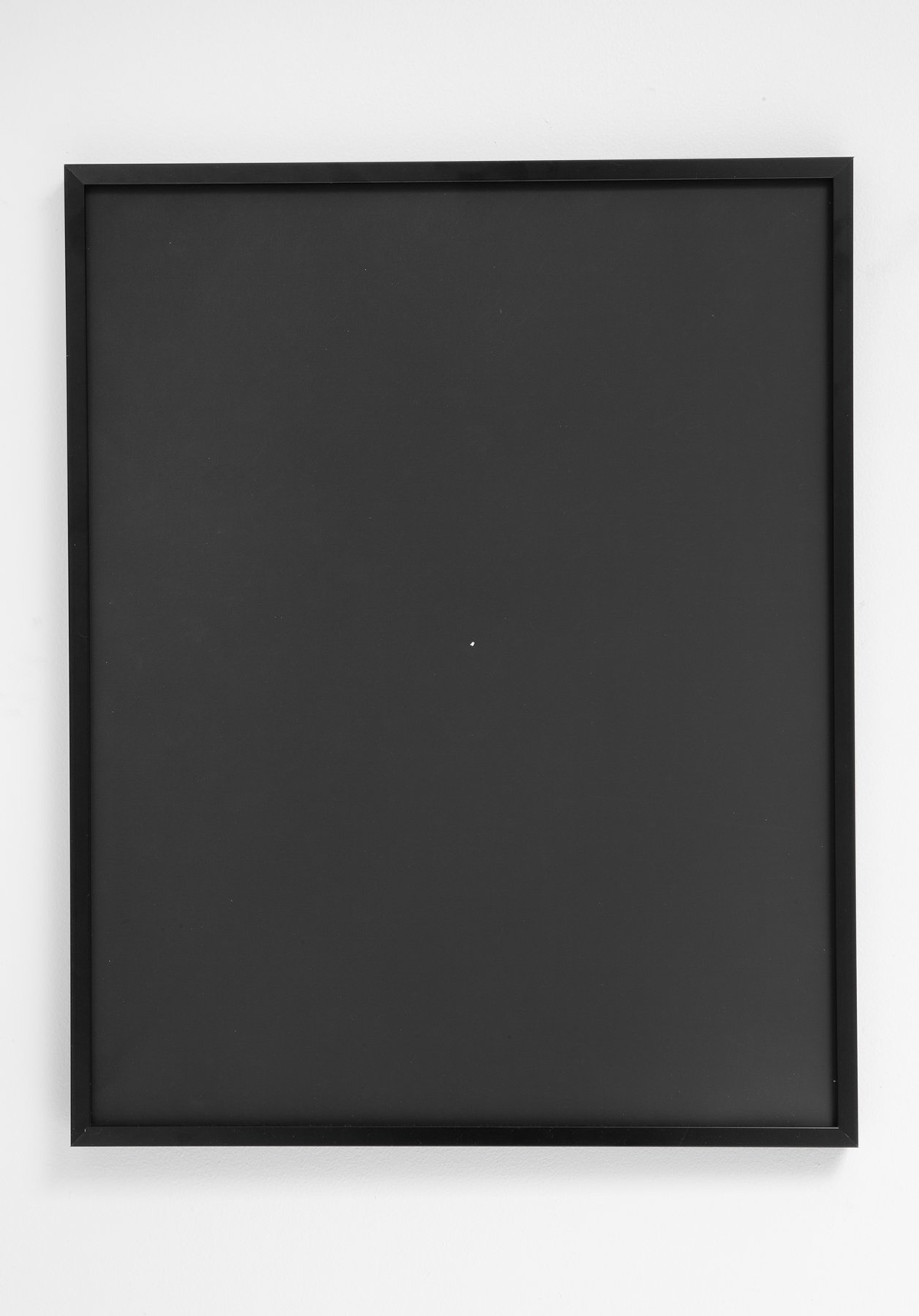 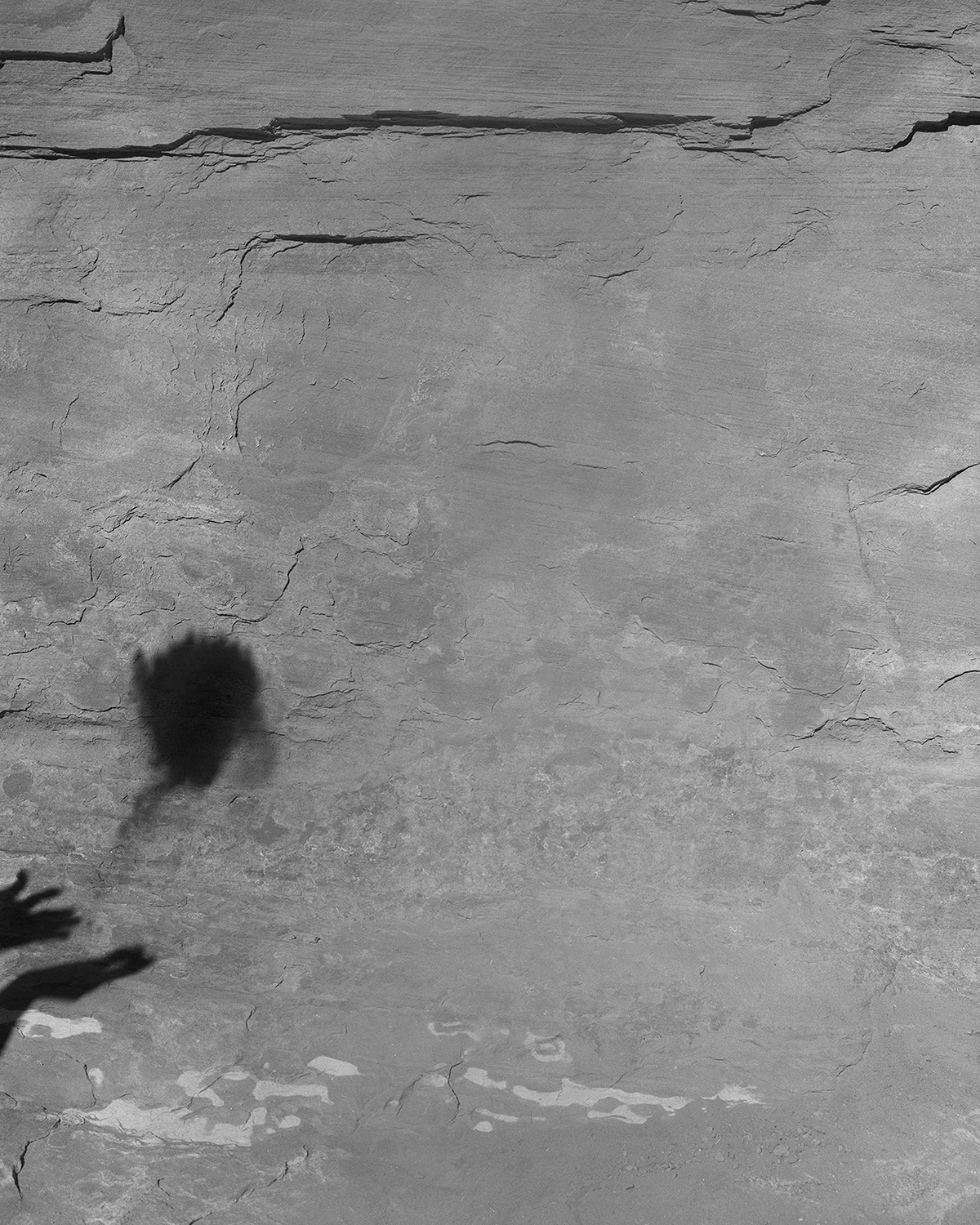 I really love the image of shadows over sandstone and the relative playfulness/abstraction of the gesture. It feels like an important image to allude or visualize your hand and the human element within the body of work. Can you talk about how this work navigates and synthesizes body, time and space, as well as the importance of mark making within the series?

This piece was an act of creating suspension. I wanted the hands to stay in the frame as a way of imagining a state of becoming or creating dust. To reference back to the title of the exhibition, this piece embodies a state of becoming lighter than air. You have the solid body, my hands, and the broken down residue of particles hovering, defying gravity momentarily, possibly the same particles that came from that giant sandstone wall. I loved how the image is a drawing of the real world, the actual world is never really seen. I also thought this piece references paleolithic rock art drawings, as most of the human hands in early rock art were outlines of the figure. I look at paleolithic art often, the marks and vestiges of those early paintings have inspired a lot of this work, ways of annotating time and observing astronomical events is exciting research. 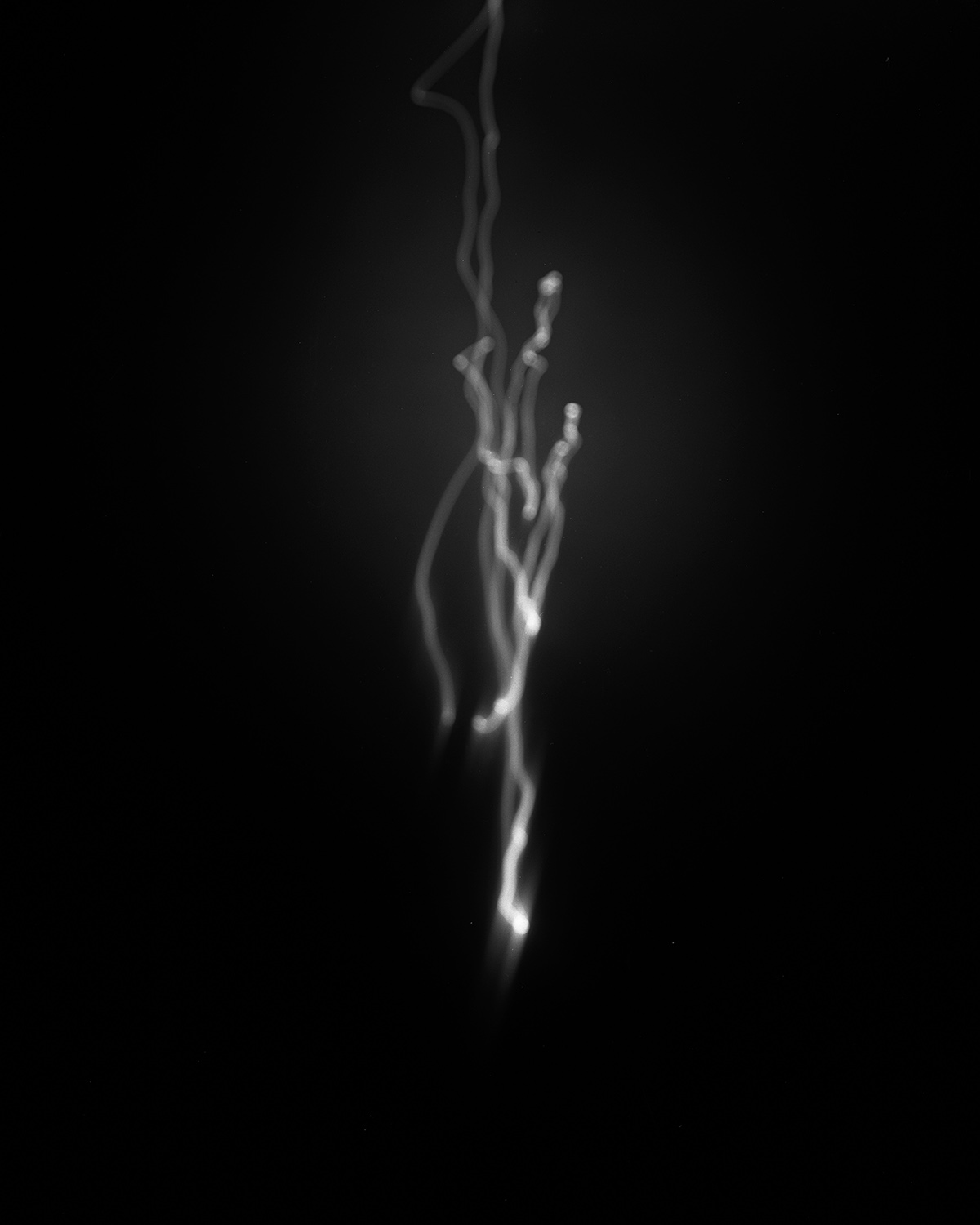 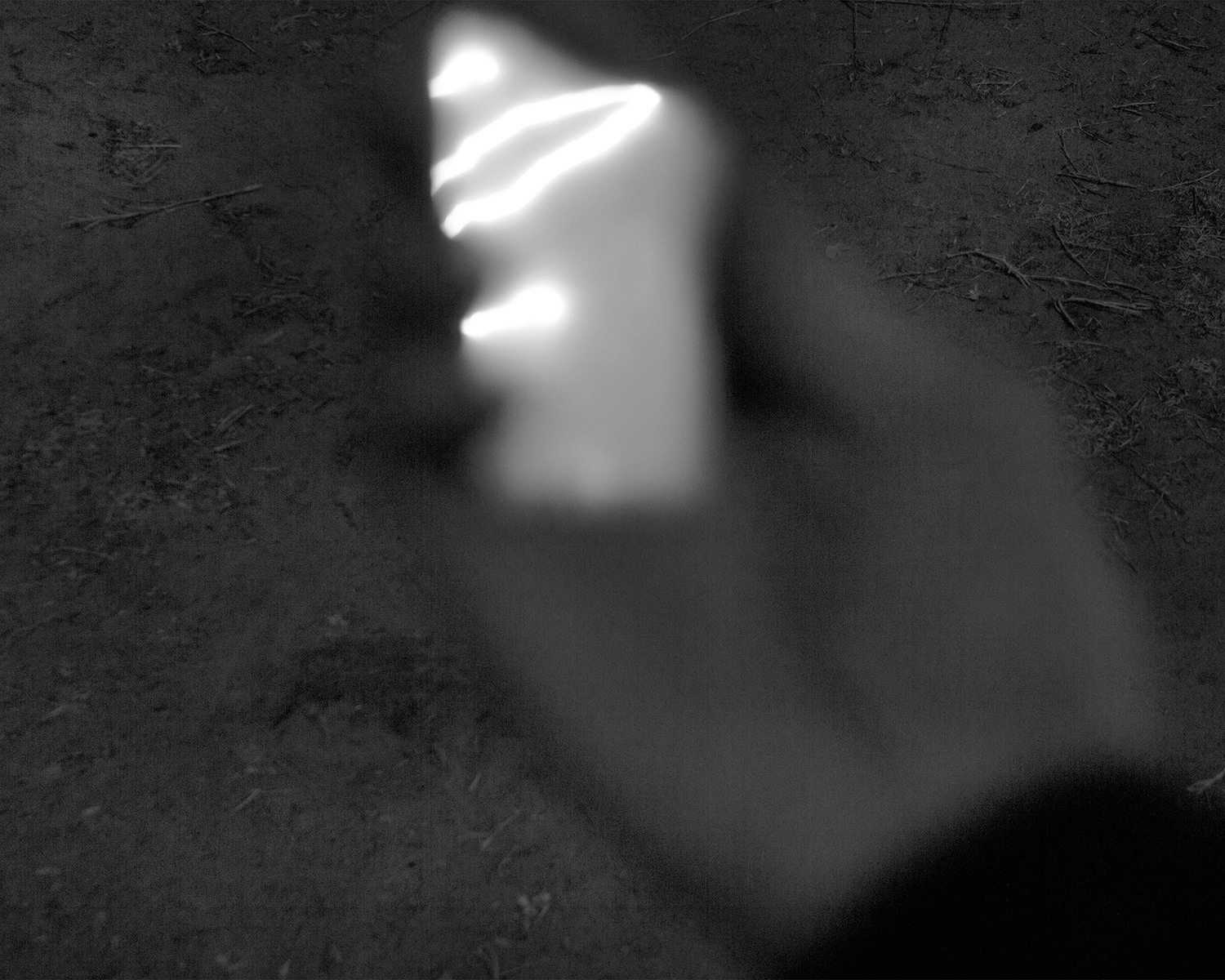 Your practice is rooted in physical analog photographic processes with process being the key word. What sparked your interest in using those processes and light sensitive materials? How do you plan to use, or build from those processes post grad school?

Working in the darkroom is a kind of alchemy. I can really transform things and “other” them. The cliché verre technique has been the start to something exciting with endless possibilities. I became specifically interested in this tool for printmaking because it is a process that uses literal dust and residue of an oil lamp flame that is wiped away after each print. The process has a life cycle to it, an act of waxing and waning. After grad school I will be continuing to explore the magic of the photographic process in conversation with time, the body, alchemy and the cosmos further. 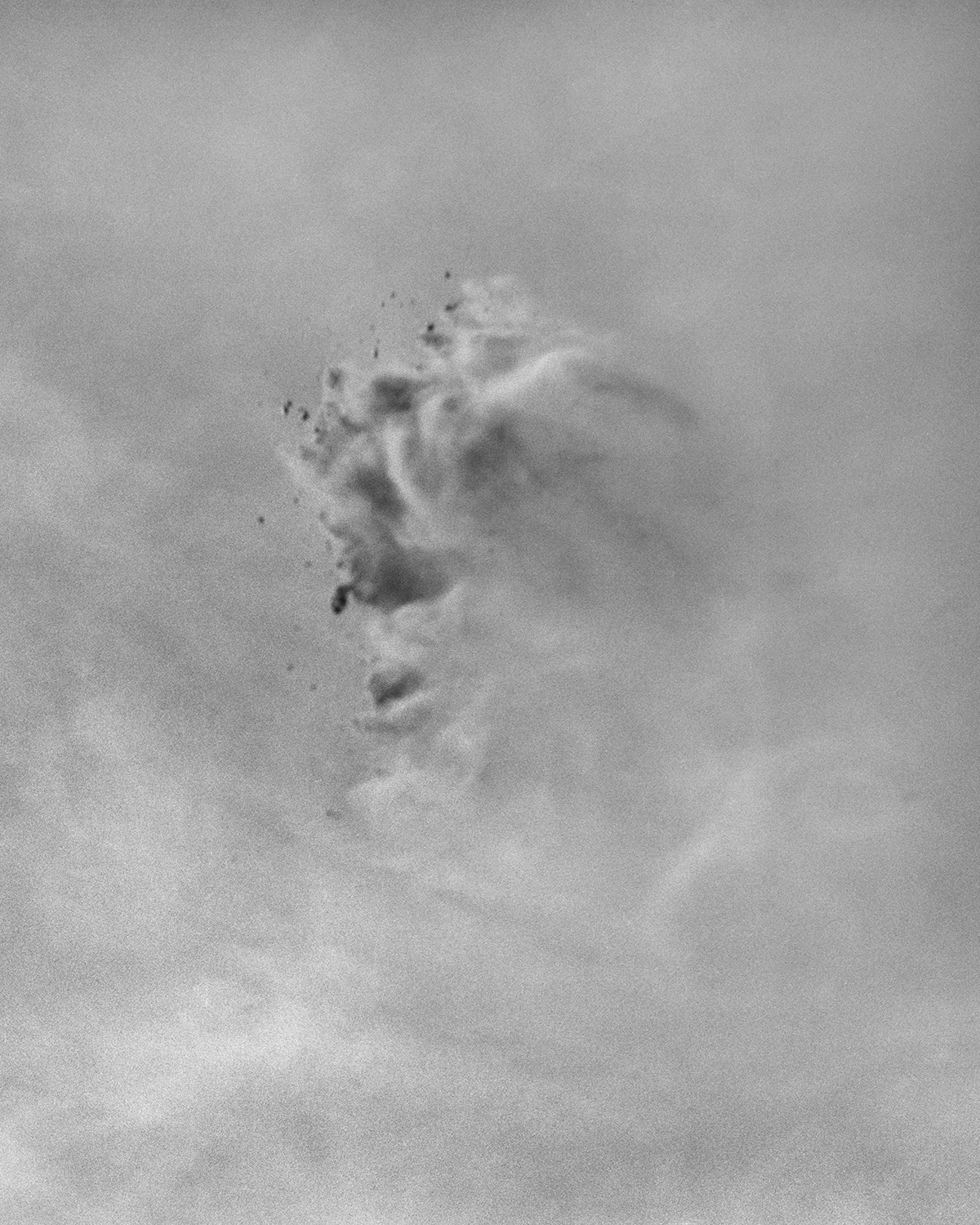 As a current MFA student that is about to graduate, I know this can be a difficult question to answer but what is next for you?

The uncertainty of leaving the comfort of my studio and darkroom in grad school is a little intimidating, but also exciting. I look forward to reflecting a lot on all the knowledge, research and seeds I started in grad school. Continuing to teach, to build community, and be close to resources for making art is always what it’s about for me, regardless of where you are physically as an artist. 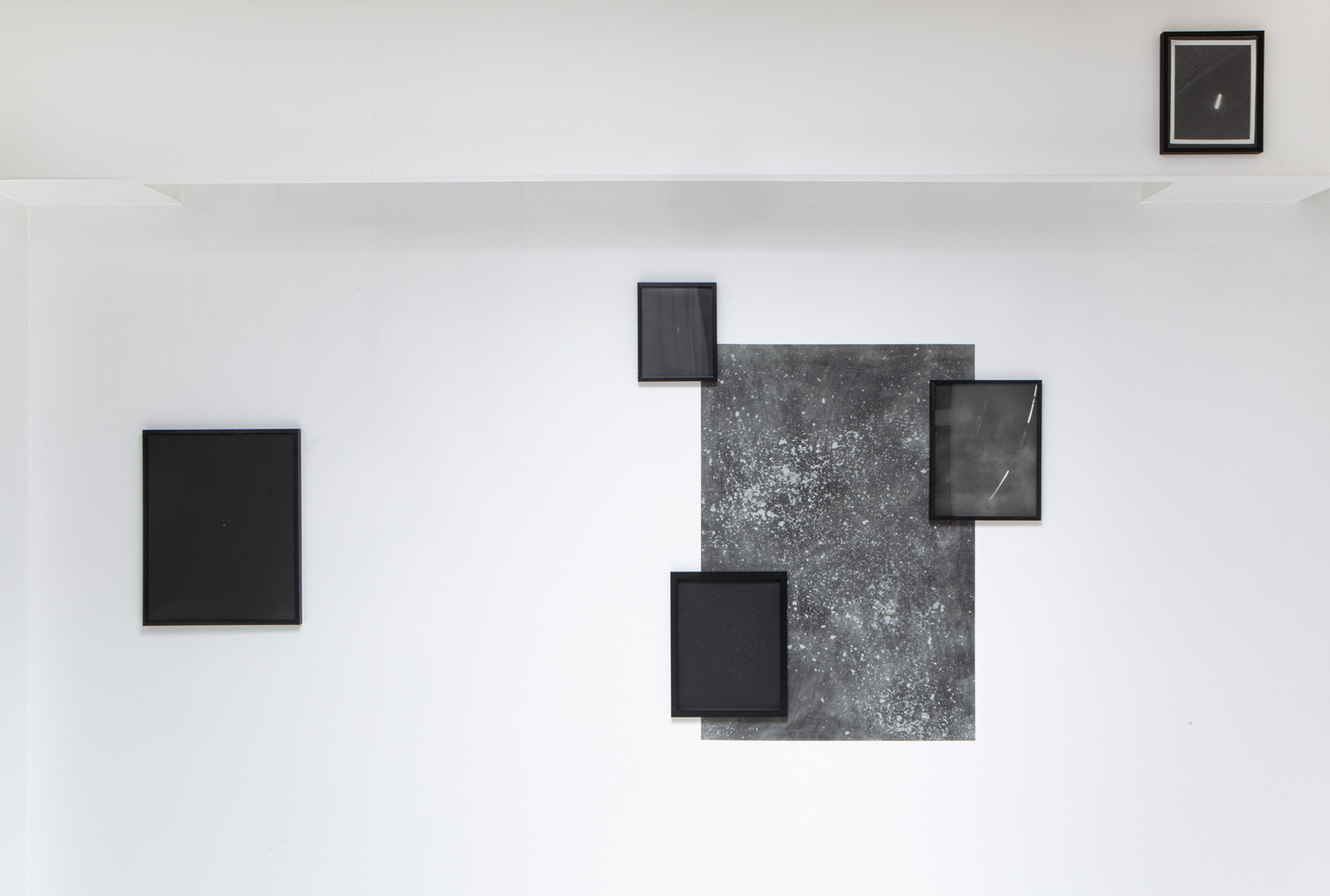 “No Solid Body is Lighter Than Air” install

Lens-based artist Shawn Bush (he/him/his) grew up in Detroit, MI, a city whose civic history and geographic location have profoundly influenced how he thinks about physical space within American sociopolitical and socioeconomic landscapes. His photographs and collages are responsive to over-built systems, failing icons, and collapsing mythologies. Bush is the founder of Dais Books and Assistant Professor of Photography at Casper College.