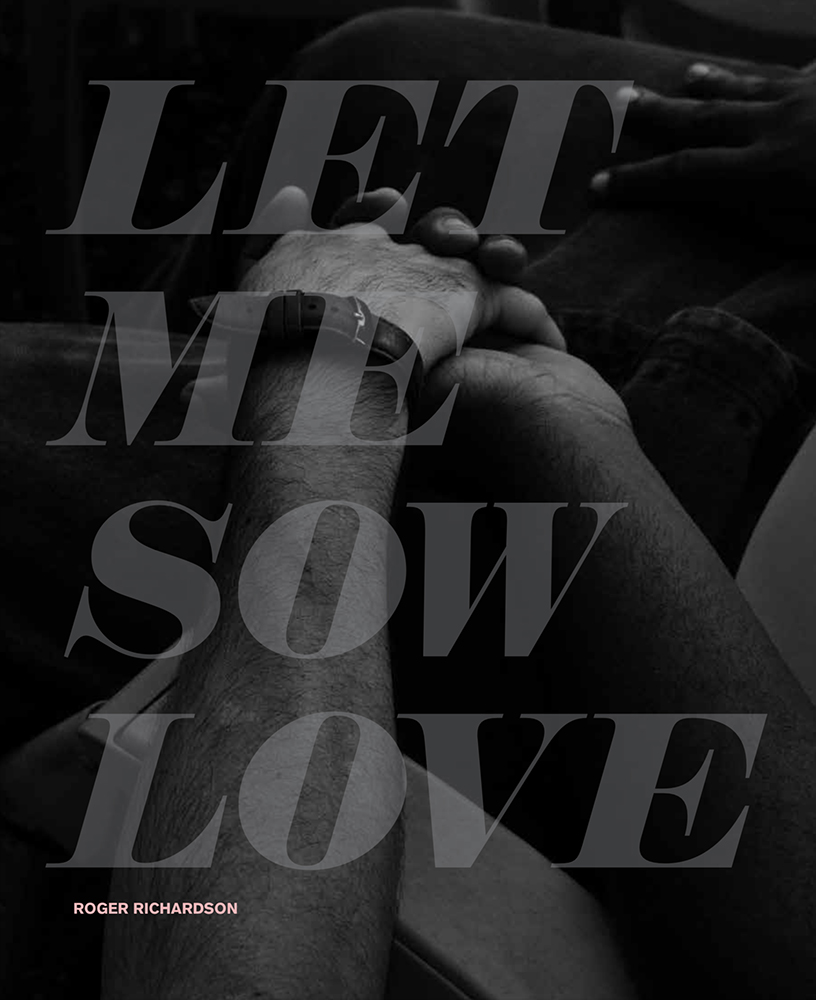 It is intriguing to consider the prayer of St. Francis of Assisi alongside Roger Richardson’s debut monograph, Let Me Sow Love, a depiction of New York’s lower Hudson Valley, published by Deadbeat Club earlier this fall. The title is taken from a line in the prayer, and a longer excerpt is included as the frontispiece in the book:

When reading the black and white photographs, it is apparent that Richardson approached the place of his adolescence and the people who lived there between the years of 2016-18–when he was photographing—with a heightened sense of grace, curiosity, and clarity.

Let Me Sow Love not only shows readers the beauty of Richardson’s slice of the Hudson Valley, but it also reads as a love poem to the place, its inhabitants, and its complexities. Found within the book’s Conversation Heart Candy-pink endpapers, there are intimate intergenerational portraits of residents, lush and bucolic Hudson Valley landscapes, and quiet views of the city life in Middletown, NY, approximately 70 miles north of Midtown Manhattan.

Yet like in any good love poem, there is a steady beat of tension throughout the verse. We can feel it building  in images where there is evidence of nature trying to reclaim the built environment,and in the tense body language of some of the people who agreed to be photographed; and we know it based on the political environment in the United States during the period that the photographs in the book were made. But, despite the myriad displays of tension  throughout the book, affirmations from the St. Francis of Assisi prayer are present: evocations of pardon, love, union, faith, hope, and light.

One of these affirmations that resonated most for me appears on the final page, an image inserted after the colophon as an endnote: an uninhabited building has graffiti scrawled on it that states: “Angie, Angel/ Angel Jr, Wyatt/ Lived Here Happy!” We are not left on a note of lasting despair or sadness. Richardson shows a vantage point for the certainty of hope and joy ahead. 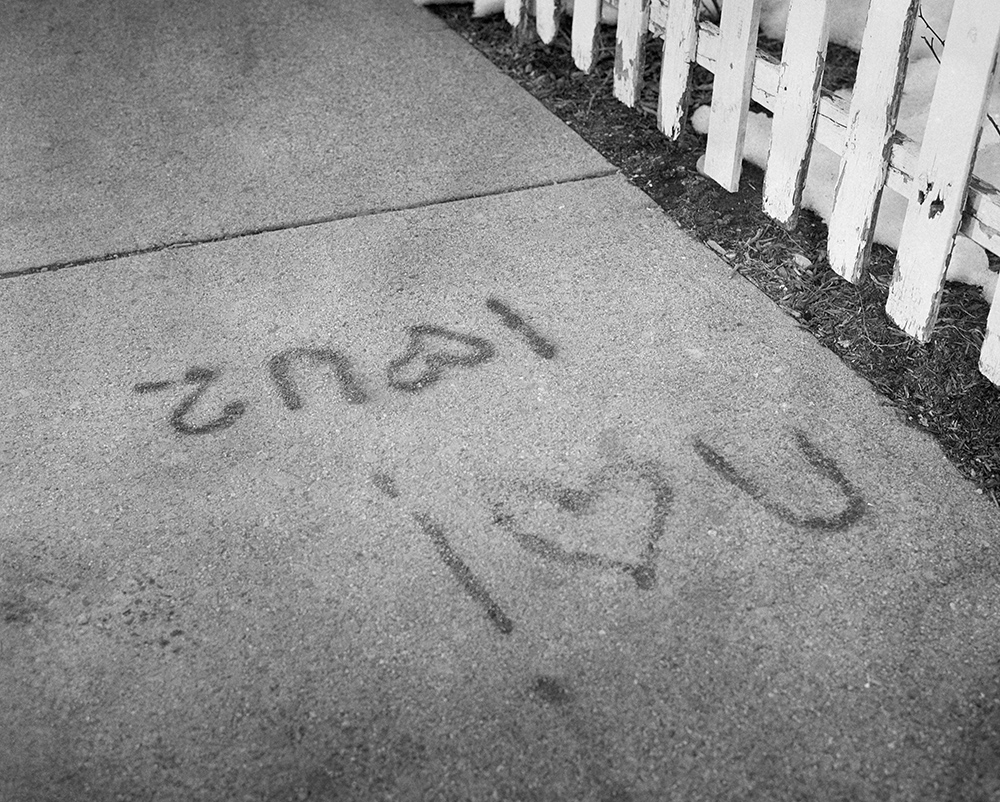 Let me Sow Love is the result of the growing social, political, and racial divide in the United States. As a firm believer in social and political progress, I feel as though, as a nation, we’ve lost our footing on the path towards change and growth. A culture of anxiety has spread rampantly over the place I call home, to a point where I questioned my place in this community. Rather than searching for evidence of this divide, I chose to use a more meditative approach in making this work. I realized photography can be used as a tool for emotional healing, self-reflection, and mindfulness. These photographs are a culmination of different things I am trying to keep a hold of during turbulent times. The work functions as a way for me to stay connected to a world I’ve grown extremely wary of.

These images utilize themes of love, faith, and uncertainty to represent my emotions during our current climate. Using a documentary-like approach, the viewer is transported to a semi-fictional world where multiple vantage points and different compositions invite the viewer to engage with the subjects presented in a first-person perspective. Small gestures and movements are highlighted, showing the beauty of everyday life. – Roger Richardson 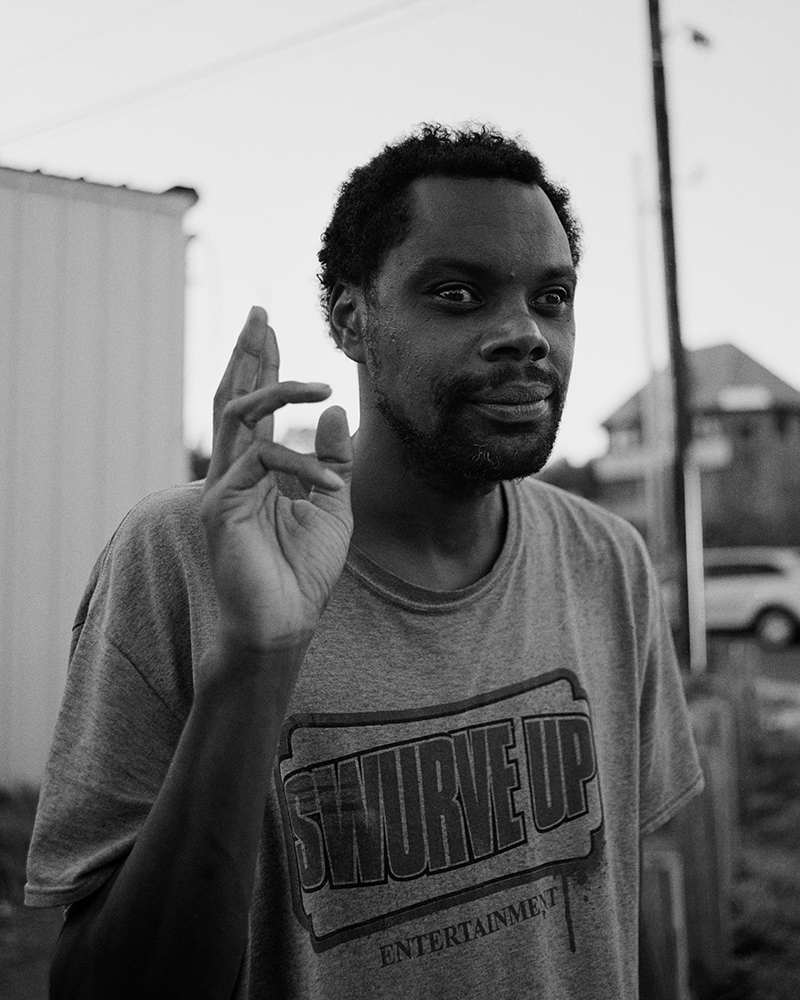 When politicians and pundits talk about the heartland, or the heart of the country, they’re generally not pandering to places like Roger Richardson’s Middletown, which is located in Orange County, in New York’s Hudson Valley. Yet the people and places in Let Me Sow Love exist right smack in the middle of myriad 21st-century American realities. Refreshingly, though, there’s not so much as a whiff of polemic in Richardson’s photographs. As the title suggests, this is a book full of what feel like genuine and compassionate interactions and engagements, as opposed to the now-expected confrontations. You sense right away that Richardson knows this place intimately, and these are his people. As a result, Let Me Sow Love presents with remarkable clarity a compelling portrait of an utterly realistic human community at a unique and radically insecure moment in the country’s history.

The late Philip Levine, arguably the greatest working-class poet of the late 20th century, once said that his goal was to write poems so transparent that “no words are noticed. You look through them into a vision of the people, the place.” Time and again, Richardson realizes Levine’s vision through his photographs, and it’s a vision that will be achingly familiar to anyone who grew up in or has spent time in strikingly similar working-class cities and towns all over the United States. 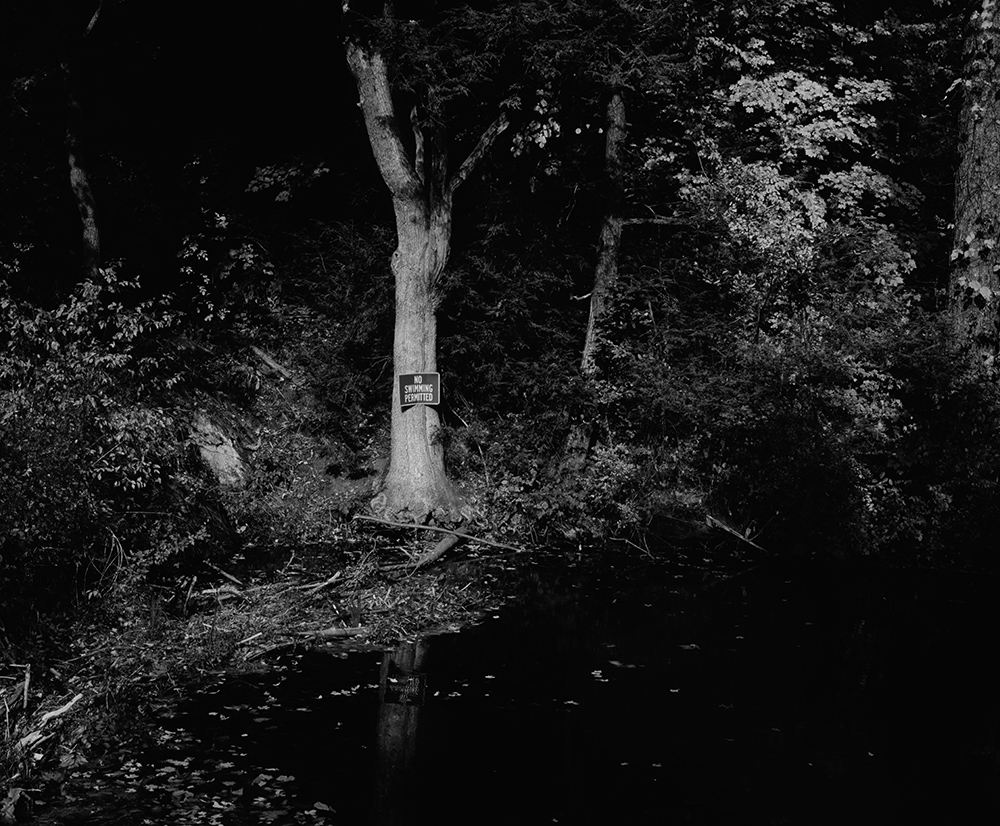 Sara J. Winston: Congratulations on your book Let Me Sow Love! It is a sweet love letter to the Hudson Valley, a place that’s very dear to my heart as it’s where I’m from too–Monroe, not too far from Middletown. Thanks very much for taking some time today to answer a few questions about the images and the book.

Roger Richardson: Thank you so much, I’m so excited to chat with someone else from the HV! 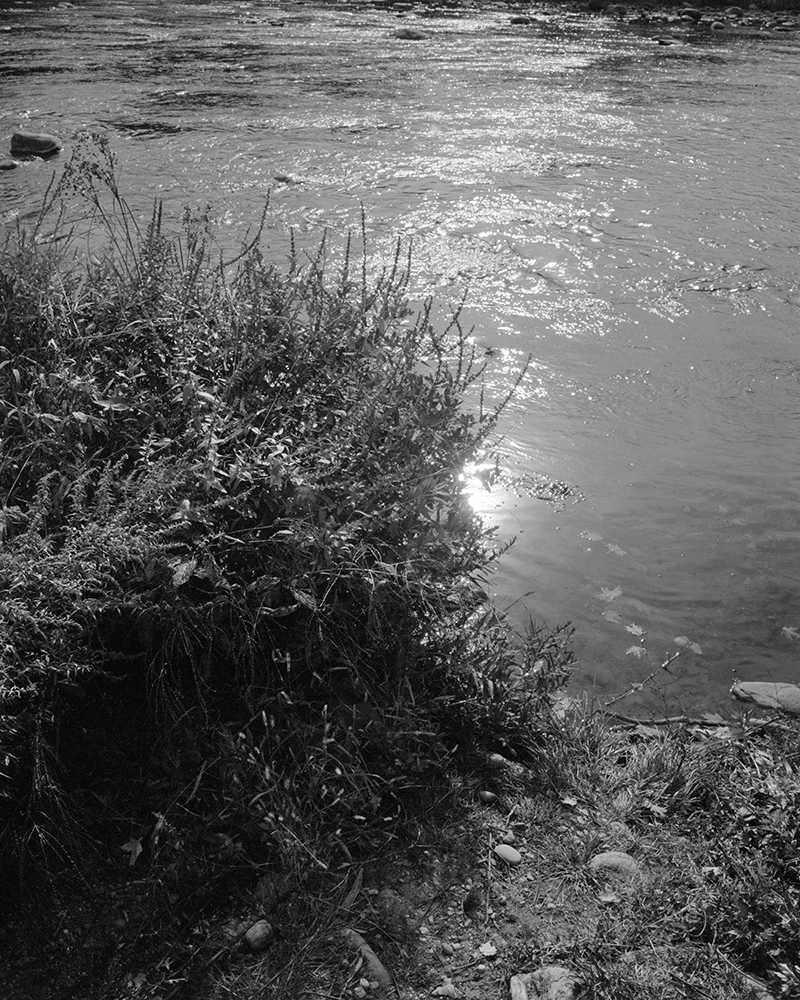 Sara: When you began photographing Let Me Sow Love in 2016, what were you curious to discover about Middletown and its people? Did that inquiry evolve over the years you spent photographing there? Did your regard for the place deepen?

Roger: This is kind of a long story! The early stages of Let Me Sow Love actually started in 2011, right before graduating from high school. My family had moved up to Middletown from Yonkers a few years prior and I struggled to come to terms with where I had moved. It was a bit of culture shock. It was my first time living in a rural area and along with that the first time I began to openly see certain political and social ideologies I didn’t support. People flew confederate flags, I would often see swastikas carved into trees close to my home. It was very scary for me, especially as a teenager of color. Shortly after learning the basics of photography, I began to make photos in parts of town that I may not be too familiar with. I think it was all an attempt to try and better learn about a place through the use of photography. By 2016, I think my photos and view of the area changed tremendously. The photos I made shifted from being fueled by pessimism to something more complicated. It’s just like you said, the project became more of a love letter to this deeply complicated place that I now call home 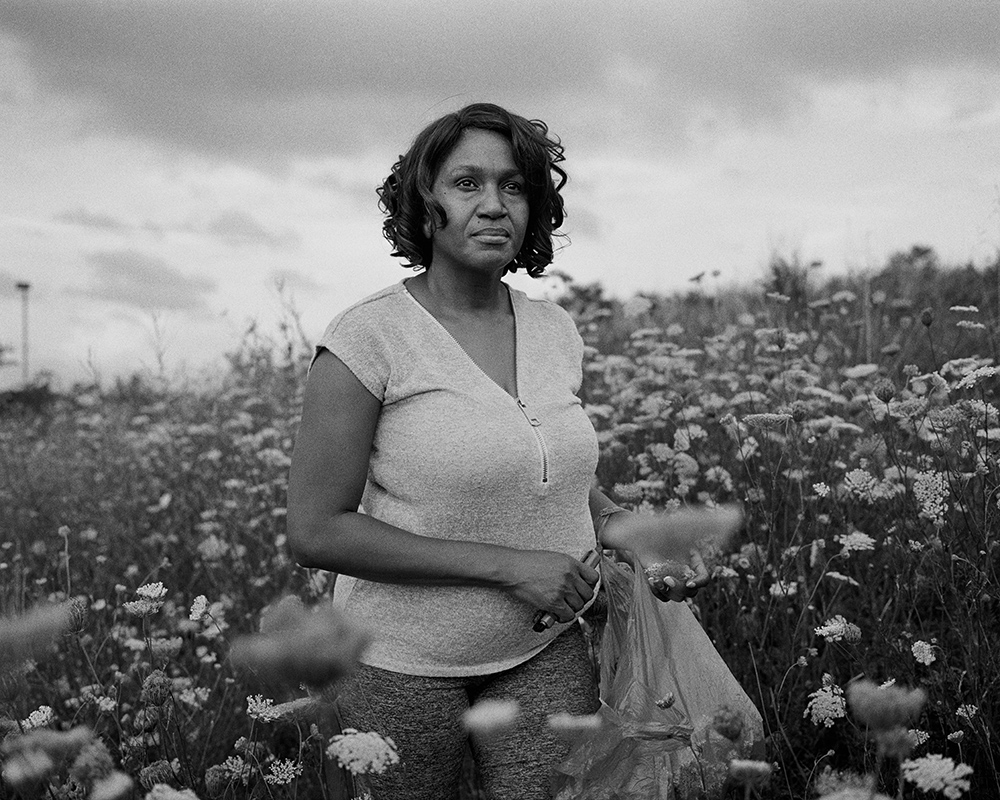 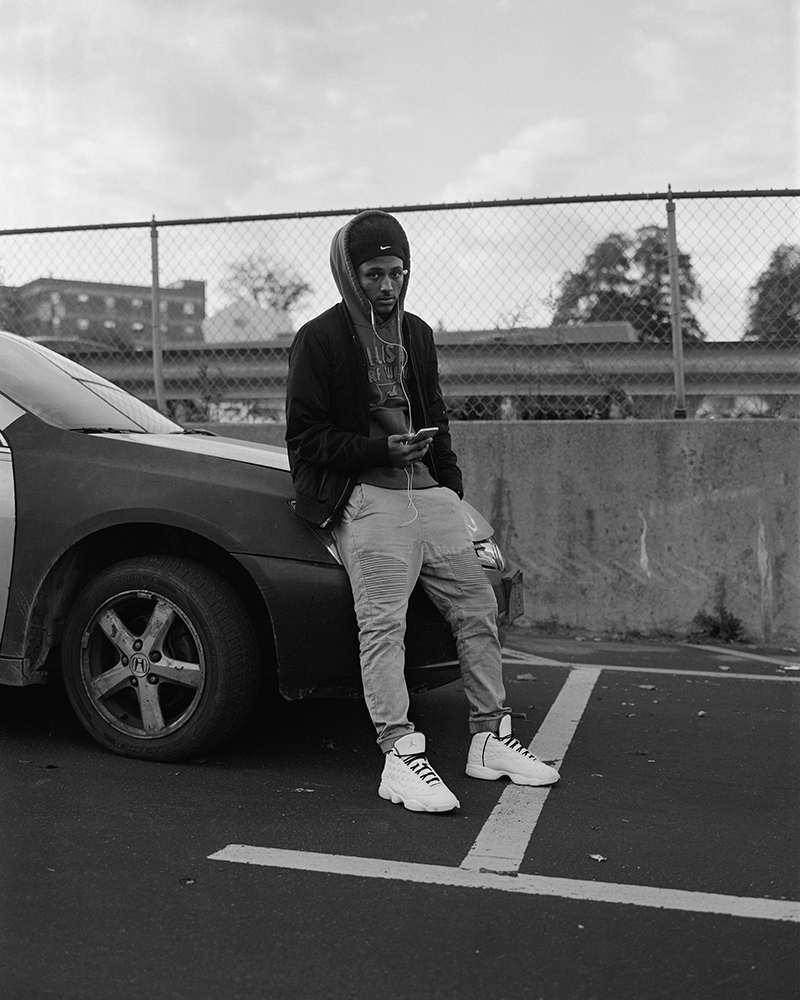 Sara: How would you talk about the work when approaching the people you photographed?

Roger: I honestly would just approach people I saw while walking around towns and had a short preamble before asking if I could make this portrait. I’m a terribly shy person but I kind of come alive when it comes to making photos. Talking about the work itself though was always a challenge because it felt so abstract at times! 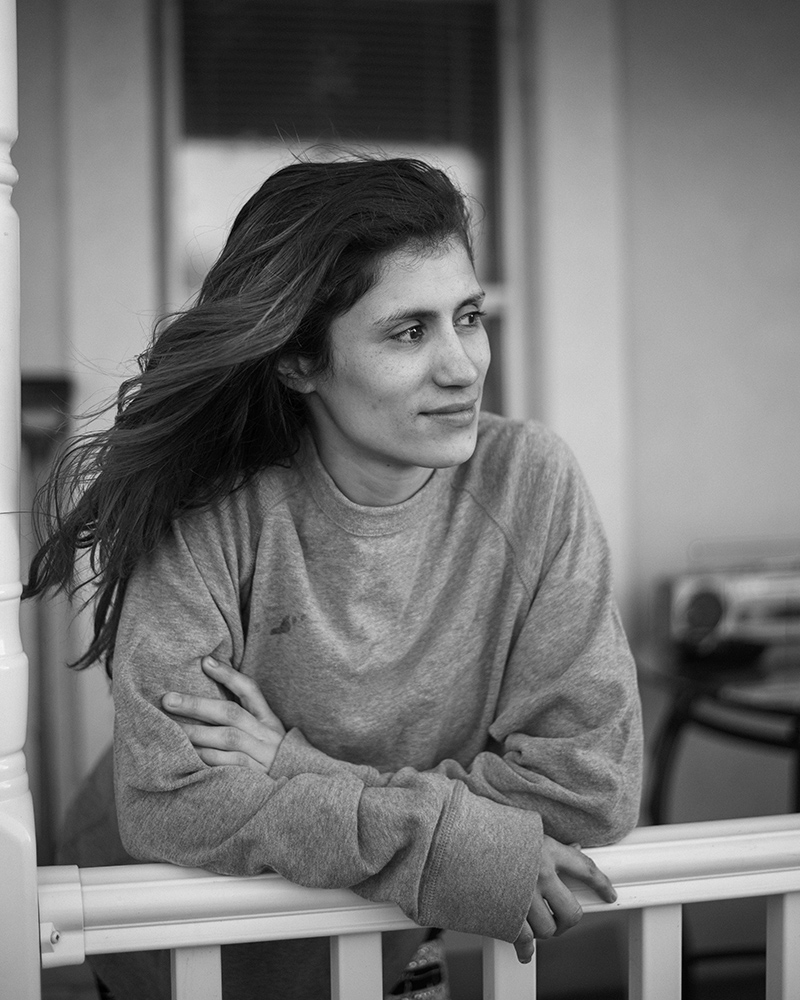 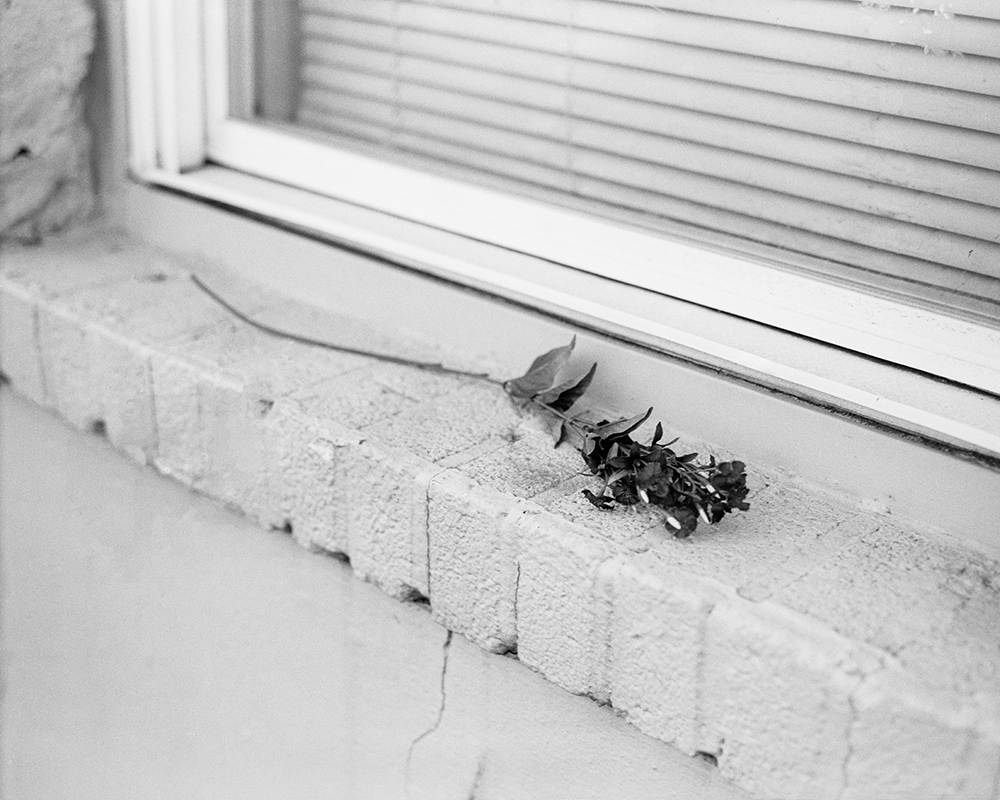 Sara: How did you know that this work was complete in 2018?

Roger: For this body of work I had been photographing so much, it was almost every single day for two years! By 2018, I had made so many photos that I had made several different edits of the work. By that time I knew it was probably time to move on to something new. 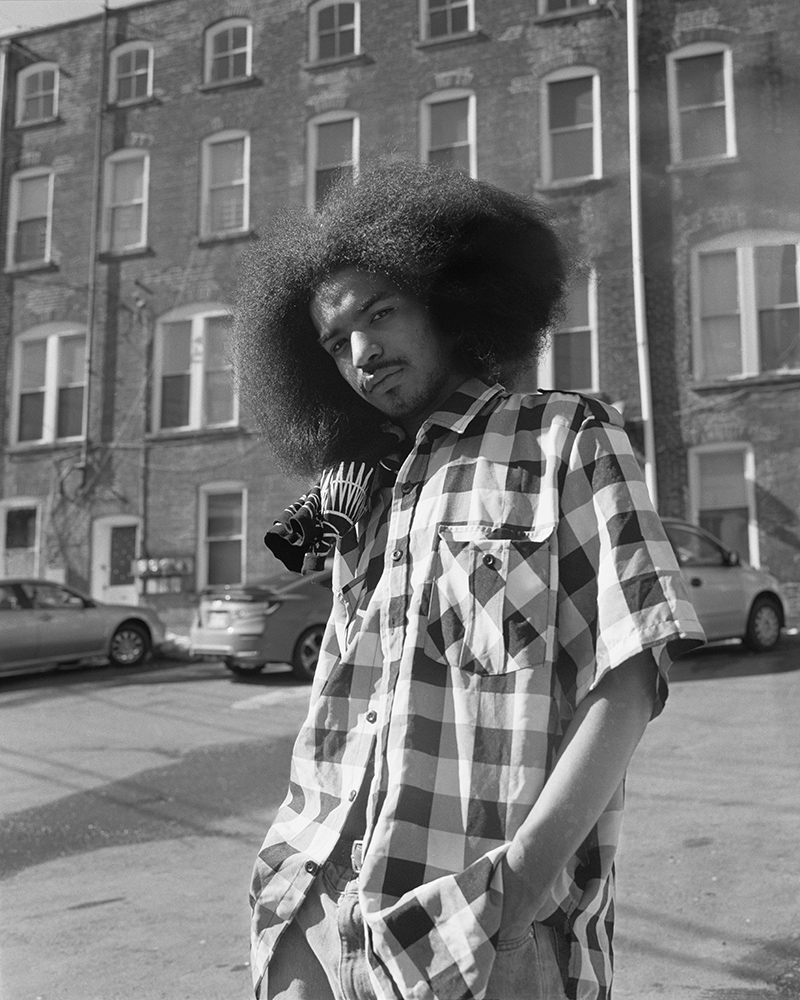 Sara: Would you share a little bit about your editing criteria for the book? Was there a meditative or rhythmic  approach to the sequencing process?

Roger: I think it’s a little bit of both. In editing a sequence of images, I think what’s just as important as the images are the space in between the images. For me, in personal work like this, that’s where a lot of the interest lies. 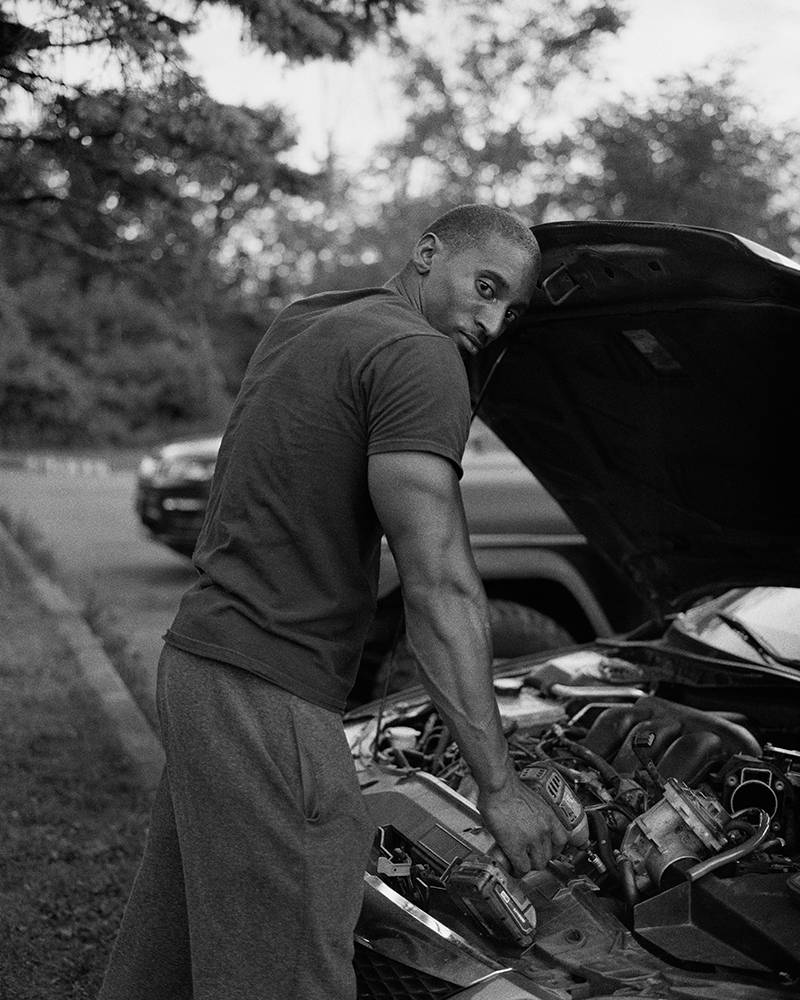 Sara: Does the work in book form surprise you? What is it like for you now that Let Me Sow Love is out in the world?

Roger: It surprises me how good it looks! I never thought I’d be able to see my work in book form. I’m so grateful to Clint Woodside for giving me this opportunity and making my dream come true. It’s great that I’m able to share the finished work with anyone interested in it. I’ve gotten a ton of amazingly kind messages from people who got early copies. It’s so surreal! 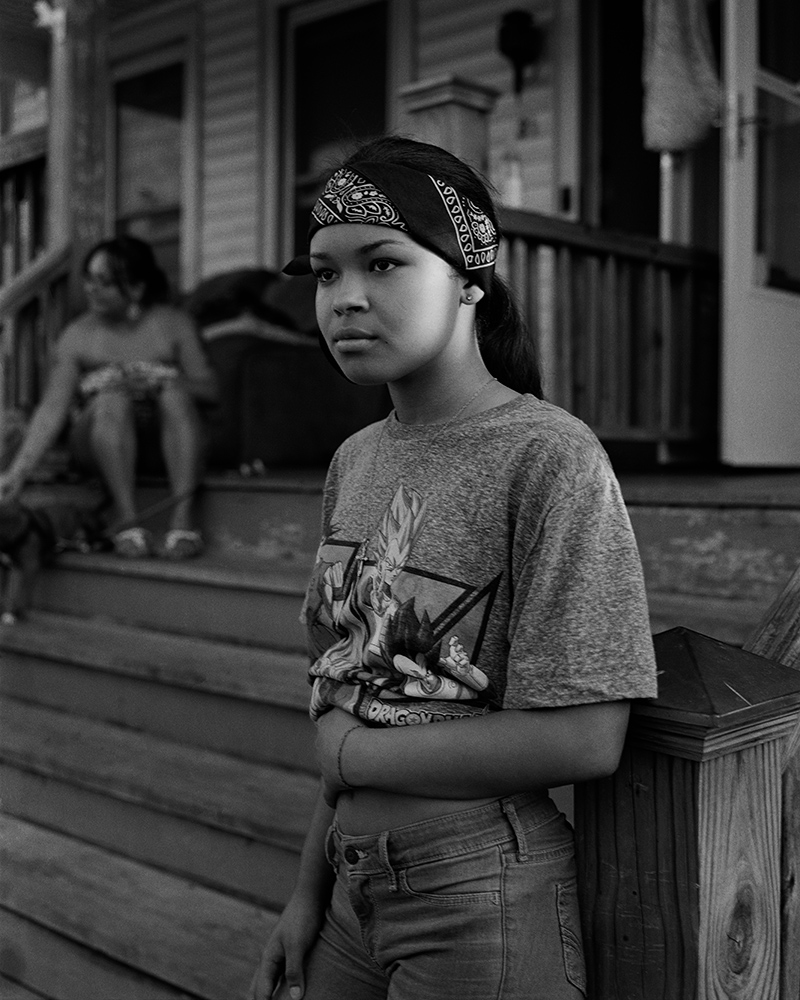 I’ve always thought photobooks, zines, or any kind of publication is one of the best ways to consume art photography because of the ease of access. So I’m so happy to finally share this with everyone in this way. 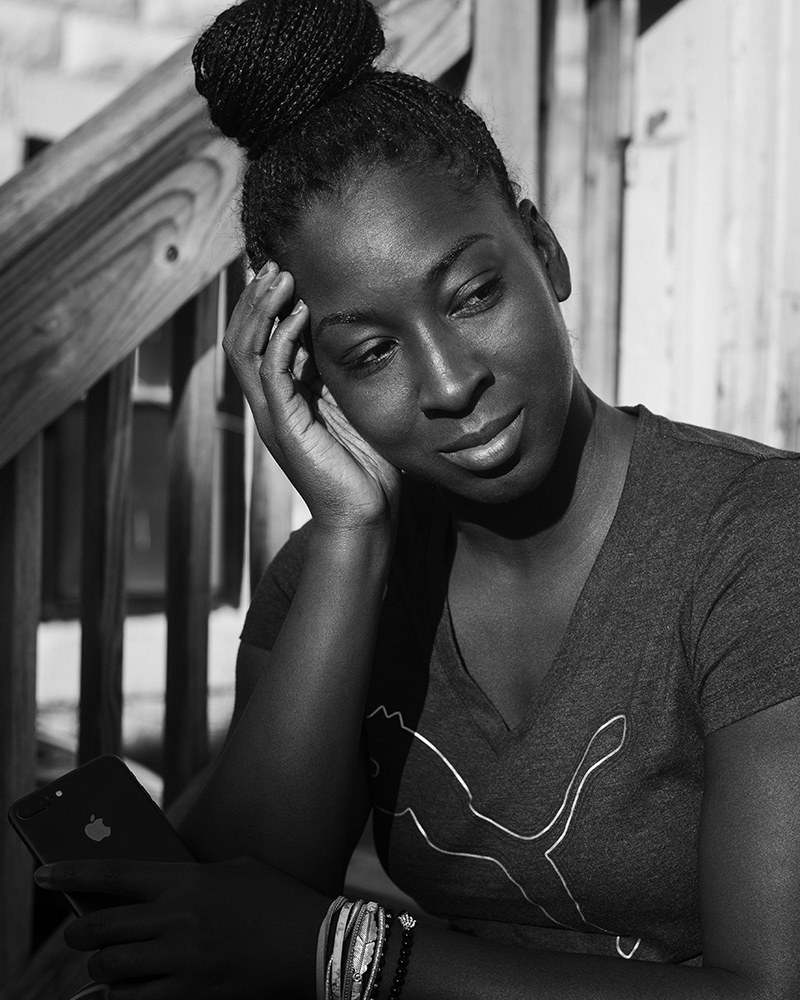 Sara: What are you currently working on, and what is on the horizon for you as an artist?

Roger: I’m working on a body of personal work titled, All The Colors Bleached to White. It deals with themes of death, mortality, and legacy. Hopefully, soon I can share more about it! 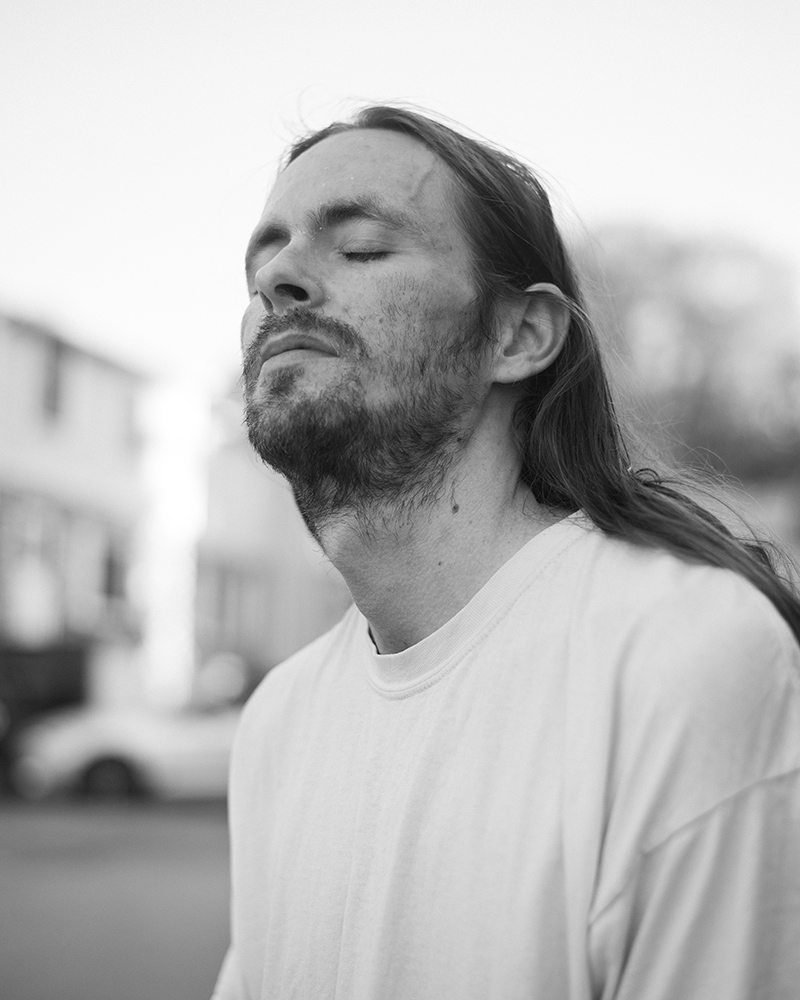 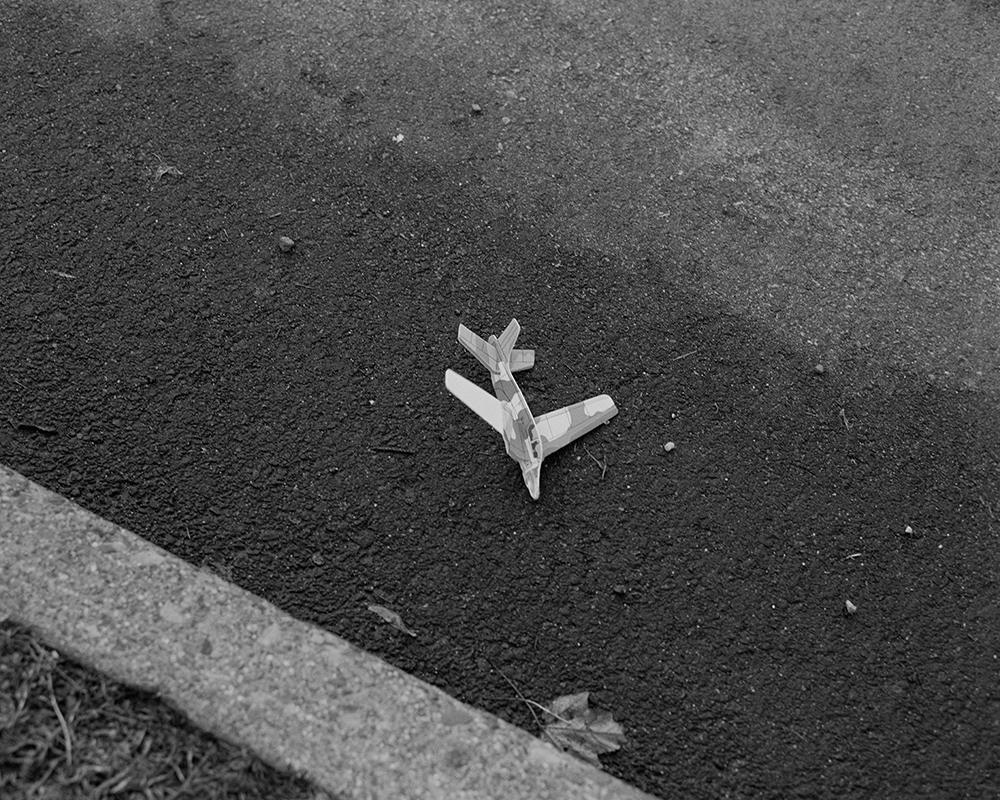 Roger Richardson (b. 1993, Bronx, NY) is a photographer living and working in the Hudson Valley, New York. He received his BFA in Photography from SUNY Purchase College in 2016 and has exhibited globally. His work lies within a documentary style, focusing on issues of race, community, faith and the everyday.

Each Deadbeat Club project is selected with the expectation of collaboration and a longstanding partnership. Working closely with photographers and artists around the world, making sure their original vision is never compromised, we produce a body of work that we are proud to share with our community.

Sara J. Winston is an artist and contributor to Lenscratch.