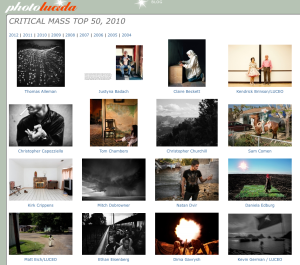 The results of Critical Mass are in and the top 50 portfolios have been selected. This week, Lenscratch will explore some of the selected portfolios, starting with Mary Shannon Johnstone which follows this post.

After a pre-screening by a panel of 22 esteemed jurors, 175 photographers made it through the first round. A panel of over 200 jurors from all aspects of the photo world (including me) then reviewed the 175 portfolios and from our rankings, 50 were chosen. The 3 photographers with the most votes will receive a book award — Photolucida/Critical Mass will be announcing the lucky 3 in the coming weeks.

I think it’s important to take time to review the 50 portfolios and read the accompanying statements. The ability to write and communicate well is equally as important as the work. All of these projects have strong points of view–the photographers are story tellers as well as image makers. They are looking at important subjects: aging, faith, agriculture, humanity, war, the environment, and they are showing us ways of seeing the world that are unique and intelligently presented.