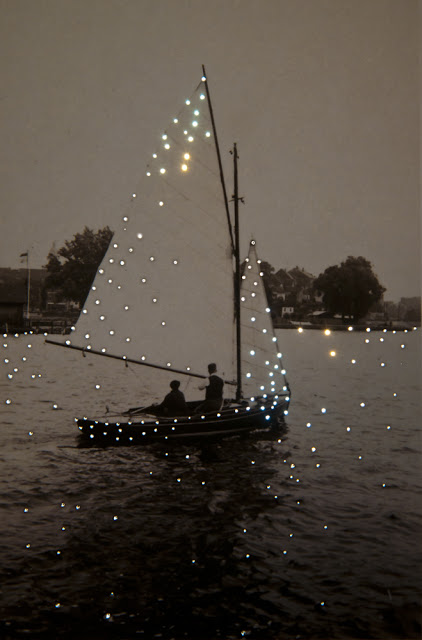 I dream of that day
Canadian photographer, Amy Friend, has created a lyrical series, Dare alla Luca that revisits the past but is made anew by the addition of scattered light.  The existing photographs transform into glowing memories or poems of stardust and shimmer that allow our imaginations to wander.

Amy grew up on the outskirts of Windsor, Ontario, Canada where the Detroit River meets Lake St.Clair. She studied at the Ontario College of Art and Design in Toronto before embarking on intermittent travels through Europe, Morocco, Cuba and the United States.She received a BFA Honours degree and BEd degree from York University, Toronto as well as an MFA from the University of Windsor, where she received a Social Sciences and Humanities Grant as well as an Ontario Graduate Scholarship.
Amy’s work has been featured in select publications such as the The Walrus, Magenta Flash Forward Emerging Photography Competition, EnRoute Magazine, LENS magazine (China), and Rooms Magazine.She has exhibited nationally and internationally and have received grants from the Canada Council for the Arts and the Ontario Arts Council. Recently Amy has received a residency at the Banff Centre for the Arts, an exhibition at the Detroit Center for Contemporary Photography and at the Mois De La Photo-OFF in Paris, France. She was also a Critical Mass Finalist in 2012.
Dare alla Luce
In my work I gravitate towards ideas relating to time, memory, impermanence, and the fluctuations of life. I employ materials and surroundings that are familiar to me using them as starting points for my investigations. These materials become the substance I use to inform the work I create. In my practice I tend to work within the medium of photography, however, I am not concerned with capturing a “concrete” reality. Instead, I aim to use photography as a medium that offers the possibility of exploring the relationship between what is visible and non-visible. 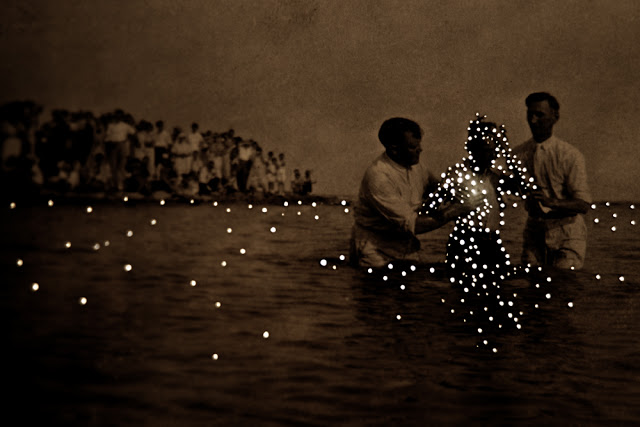 In the Dare alla Luce series, I initial responded to a collection of vintage photographs, retrieved through a variety of sources. Through hand-manipulated interventions I altered and subsequently re-photographed the images making photographs that would oscillate between what is present and what is absent. I aim to comment on the fragile quality of the photographic object but also to the equal fragility of our lives, our history. All are lost so easily. 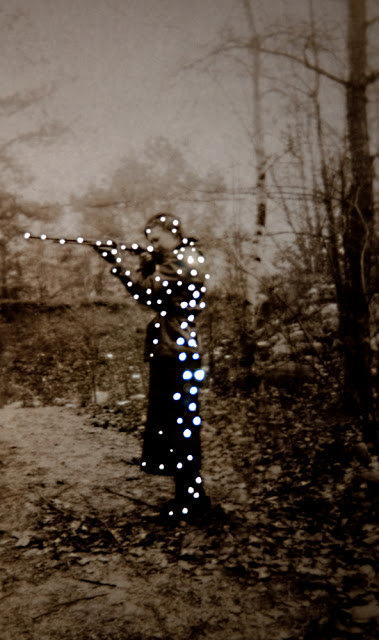 Ruth, October, 1936
By playing with the tools of photography, I “re-use” light by allowing it to shine through the holes in the images. In a somewhat playful and yet, literal manner I return the subject of the photographs back to the light, while simultaneously bringing them forward. The images are permanently altered; they are lost and reborn, hence the title, Dare alla Luce, an Italian term meaning, “to bring to the light” in reference to birth. 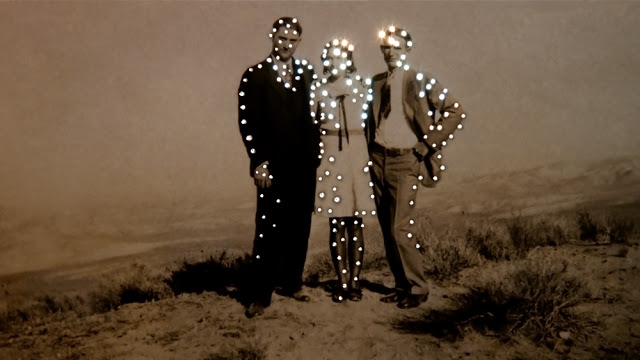 In this series I wanted to work with photographs that I did not have a direct connection to. For that reason I searched vintage shops, the internet and auctions to collect a series of images. Through the act of collecting I began to interpret these photographs as “lost” or even “dead”.  Their primary connections were severed which resulted in a removal of their original meaning to a certain degree. 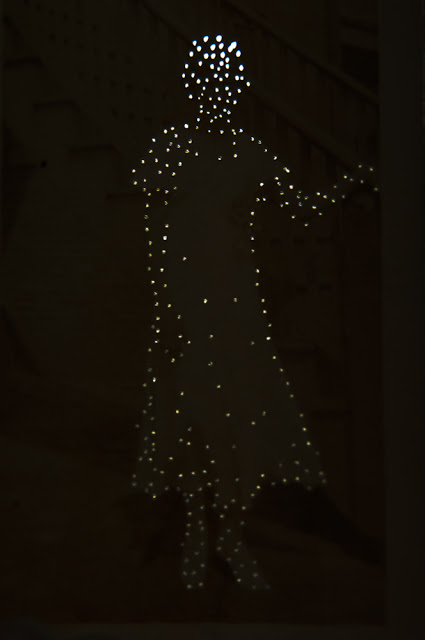 In my methodology I like to “play” – to examine what I am looking at, so I might figure out what drew me to specific photographs. I considered why a photograph is or is not interesting to me.  During this process I could not shake the question, “What is a photograph? What is its’ material quality, what does this material mean? and how does our relationship change with photographs over time?” 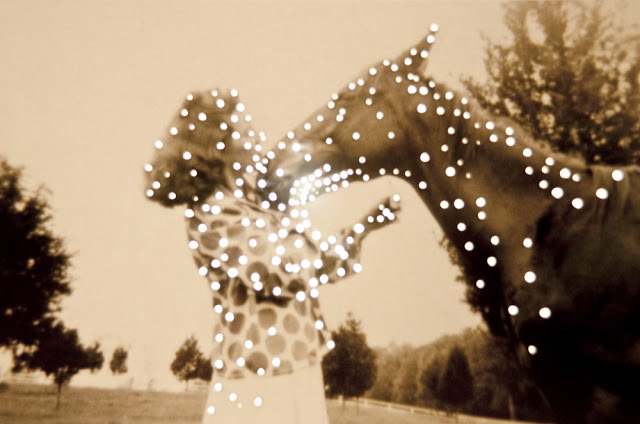 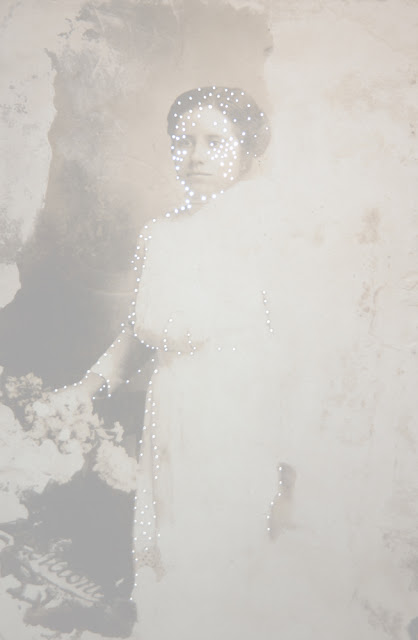 
For example in the photograph, “What is done in the darkness will be brought to the light”, I know that it is a water baptism but that is clear through what is visible in the photo. My title is a bit facetious – as I allude to the photographic processes and the darkroom, yet I also point toward spiritualism, which has intertwined itself with photograph through history.
As you read though the titles they comment on what they are and what they are not. They become something new even in their static state. 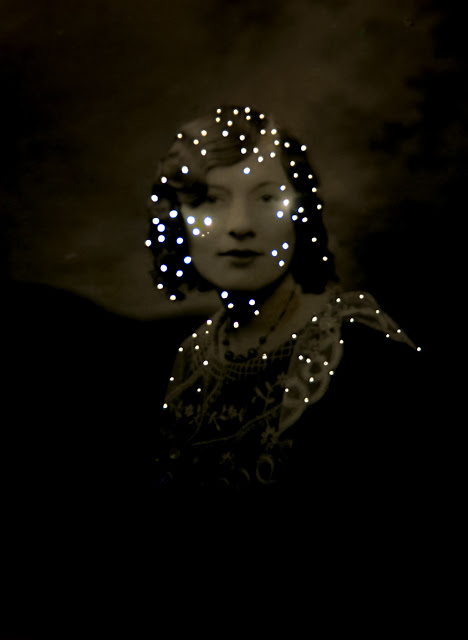 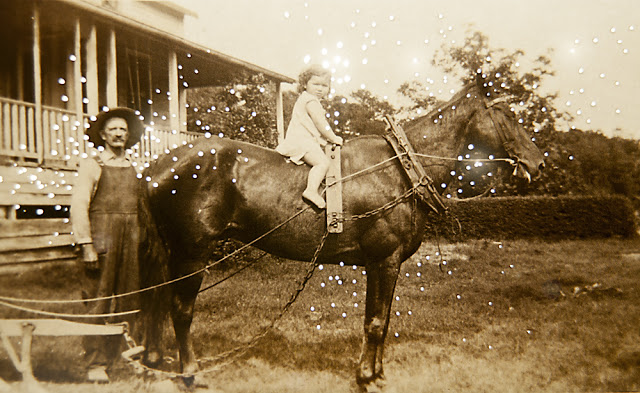 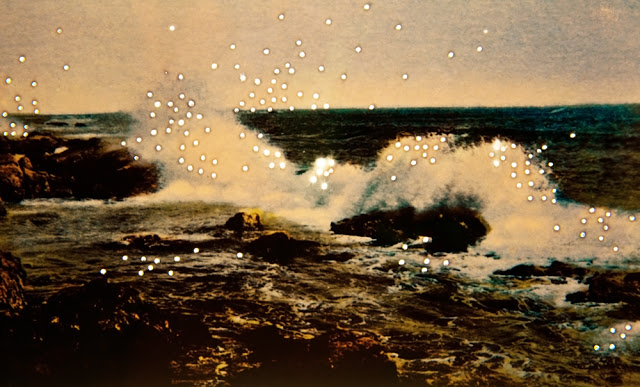 The Time I Was In Cape Breton 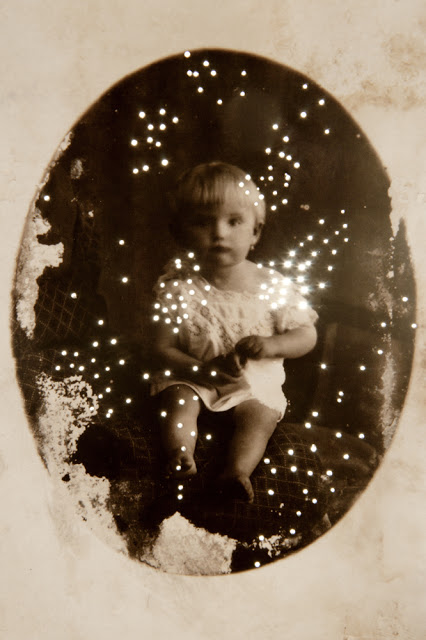 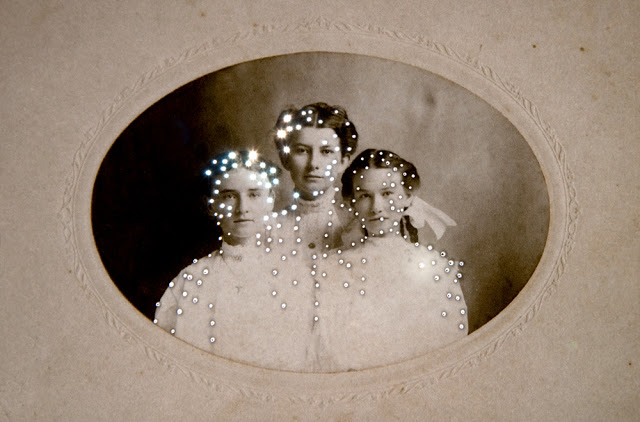 We Are The Spirit Rappers