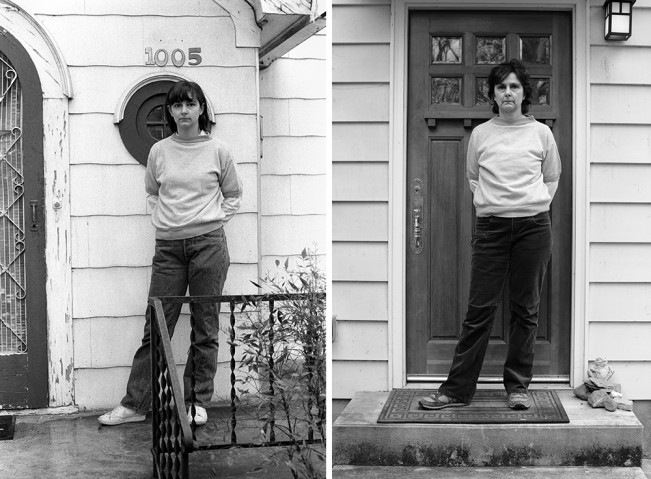 I have always been fascinated with work made over time–Nicholas Nixon’s project on the Brown Sisters, the 7Up series of films by Michael Apted, and the new Richard Linklater movie, Boyhood  as examples.  Nancy Floyd’s own personal thirty year timeline of photographic documentation reveals the ordinary–the same sweatshirt or robe worn with the same casual pose examining the passage of time.  She documents various dogs  and children over the years, but it is Nancy that roots the work with her passive expressions, letting us know that she’s still here and not so very different from long ago. Nancy has two exhibitions of this work in 2015, at the Hagedorn Foundation Gallery in Atlanta and The Pearl Conard Art Gallery at Ohio State University in Mansfield, OH.

Nancy’s work has been exhibited in numerous exhibitions in galleries and institutions around the country including Flux Projects, Atlanta, GA (2011), Solomon Projects, Atlanta, GA (2008), the Atlanta Contemporary Art Center (2002), Smithsonian Institute, Washington, DC. (2001), White Columns, New York, NY (2000), the California Museum of Photography, Riverside, CA (1996), and the Lawndale Art and Performance Center, Houston, TX (1994). Her work is published in the journal Contact Sheet, as well as in the books Game Face, Pregnant Pictures, Heart Shots, Gun Women, Real Knockouts, Bombensicher: Atomic Photographers Guild and A Different War: Vietnam in Art. Temple University Press published Floyd’s first book, She’s Got a Gun, in 2008. The book is part history of American gun women, part memoir of her Texas childhood and the loss of her brother, and a picture book with 150 historical images of women with guns, 35 of which were taken by Nancy.

Nancy has received numerous awards including a 2002 Artist Project Grant from the City of Atlanta Bureau of Cultural Affairs, and artist residencies at Anderson Ranch, Snowmass, CO (2013), The Joshua Tree Highlands Artist Residency, Joshua Tree, CA (2010), the Hambidge Center for Creative Arts and Sciences, Rabun Gap, GA (1999), and Light Work, Syracuse, NY (1998). At Anderson Ranch she completed the first draft of her book, Weathering Time. Nancy holds an MFA from California Institute of the Arts, Valencia, CA, an MA from Columbia College, Chicago, IL, and a BFA from the University of Texas at Austin. She currently makes her home in Atlanta, where she serves as a Professor of Photography in the Ernest G. Welch School of Art and Design at Georgia State University. 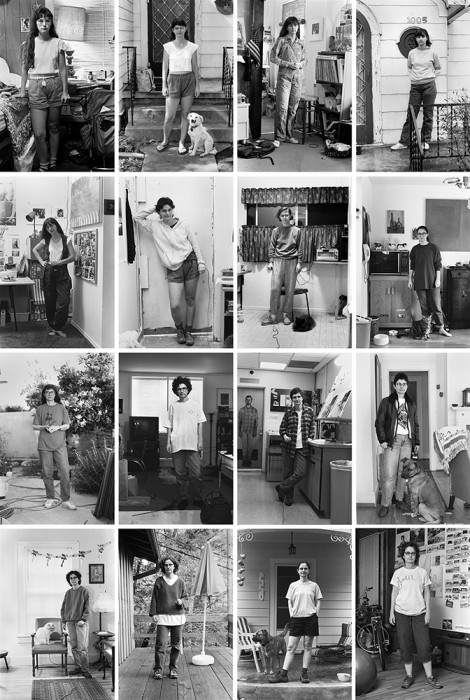 Weathering Time is my visual diary, personal archive, and record of my changing body and my environment over the past thirty plus years.

Sometimes friends and family are in the photographs and time weathers their bodies as well. In the first twenty years, two of my nieces age from infants to young adults, my body changes from young adult to middle aged, my parents grow into their eighties, and my father arrives on his deathbed. In the last thirteen years, the aging of my body becomes more obvious and my nieces appear with children of their own. In 2009, I am with my mother on her deathbed. 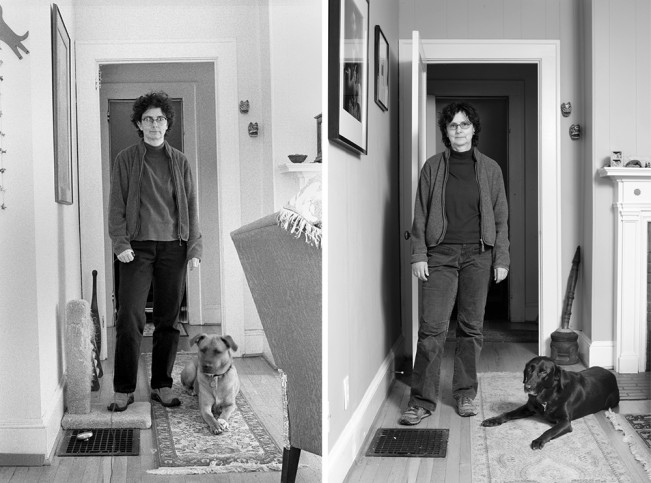 Each month is captured on one roll of film. If I fail to take a picture, the film is advanced so a blank image is recorded, creating a visual calendar. There are no edits. Every photograph is presented, even if I look bad on a particular day, pets act out, or I fail to get in the picture before the shutter is released. It’s not just my body that changes: fashion and hairstyles evolve; pets come and go; analog clocks and telephones with cords disappear; film gives way to digital; and the computer replaces the typewriter and darkroom. The photographs underscore the physical, cultural and technological changes that have occurred from my youth to the dawn of my old age. 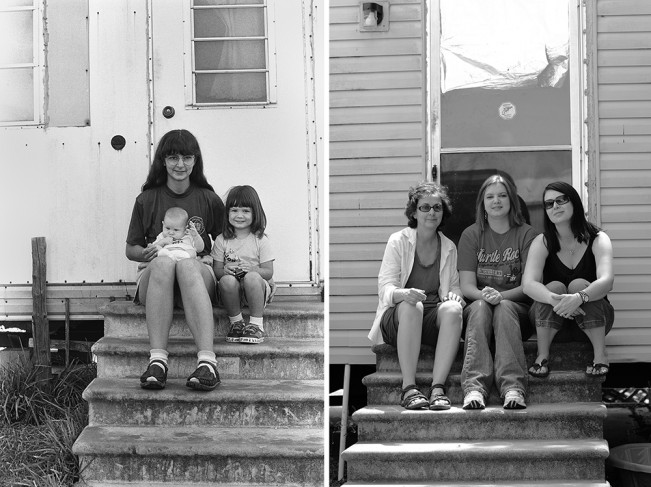 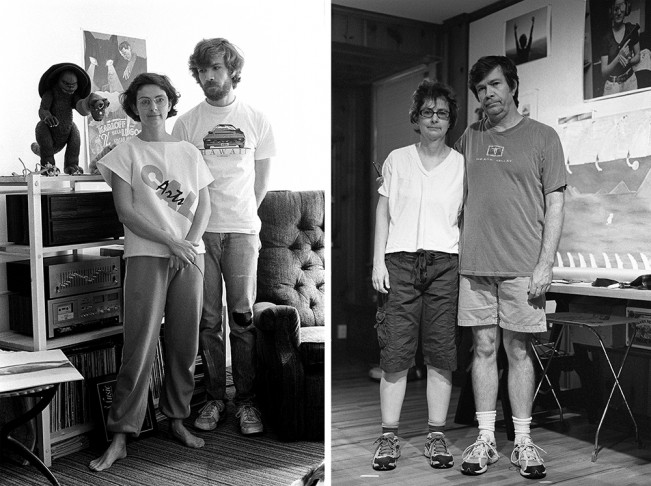 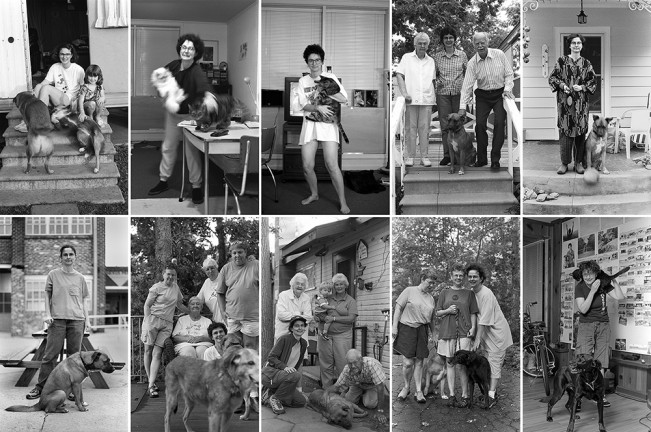 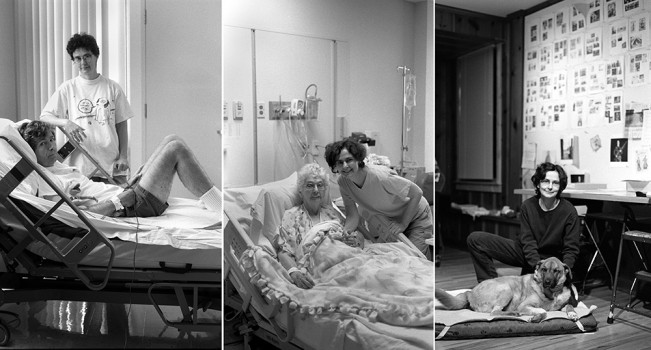 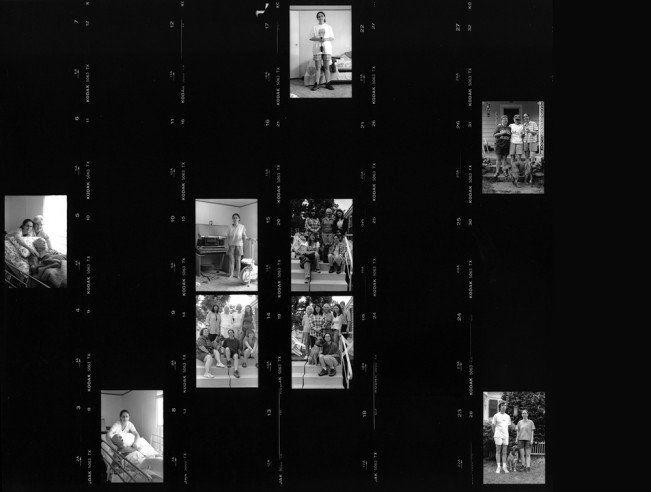 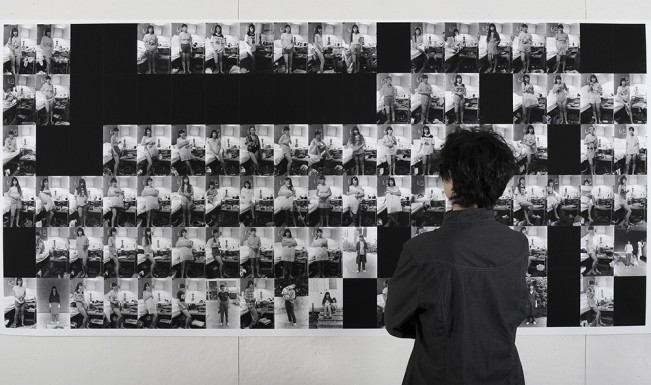 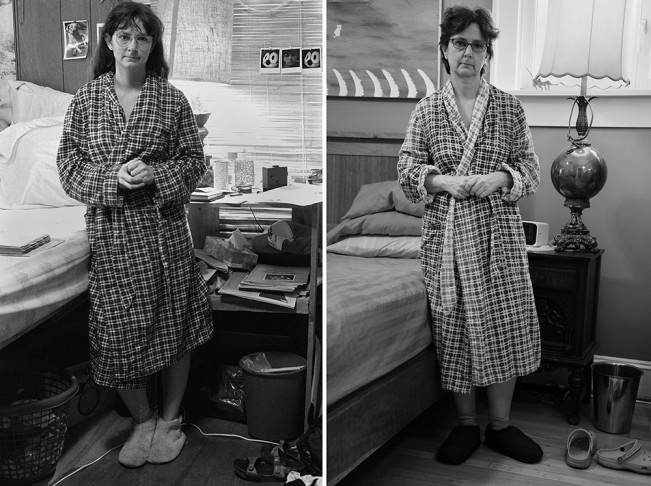