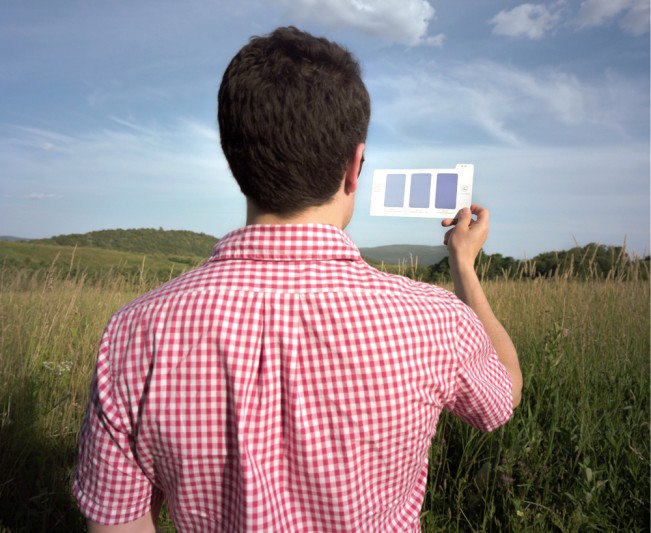 Jonathan Gitelson will be taking the lead this week, as he showcases six Vermont photographers for The LENSCRATCH States Project. Today I am sharing four bodies of work, all of which display Jonathan’s nonsensical humor onto the little things in life and fully embrace the awareness of being present in the moment.  It is apparent that location, though not necessarily site specific to Vermont, is highly influential in all of his works.  Below you can hear more about Jonathan’s background as an artist, and about his unique approach to exploring familiar places.

Jonathan Gitelson is originally from Mount Kisco, NY and currently resides in Brattleboro, Vermont. He is an Associate Professor of Art at Keene State College in NH and works in a variety of mediums that include photography, artist books, video, installation, web-based projects, and public art. Jonathan’s work has been exhibited at institutions throughout the United States, Canada, and Europe such as MASS MoCA, the deCordova Sculpture Park and Museum, the Scottsdale Museum of Contemporary Art, the Milwaukee Art Museum and Galerie f5,6 in Munich. His artwork is in the permanent collection of numerous institutions, including the Museum of Contemporary Photography, the Museum of Fine Arts Houston, the Museum of Fine Arts Boston, the Whitney Museum of American Art, the Museum of Modern Art New York and the Victoria and Albert Museum. Jonathan’s work has been featured in the Wall Street Journal, the Boston Globe, The Chicago Tribune, Art in America and Art New England.

Jonathan shares his perspective of being a Vermont photographer:

I feel a lot of pride in being from Vermont (although since I grew up in New York, I’m not sure I can officially make that claim). We are a small state, and as such, a small photographic community. One of the things that I love most about living an artistic life here is that I am simultaneously removed from the noise and commotion of the contemporary art world and at the same time only 3.5 hours away from NYC and 2 hours from Boston. My time in the studio is quiet and focused but when I need inspiration, it’s not too far away. Vermont is also quite beautiful, and I’ve found that curators are more than happy to make the drive out here for studio visits. 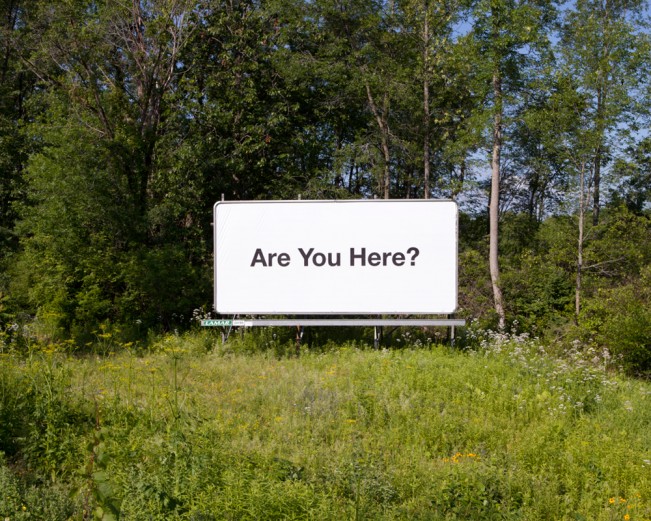 I see that you lived in Vermont for undergrad.  After spending some time in Chicago why did you come back?  How do you see the state differently than you did back then?

I went to school at Marlboro College, roughly eight miles from where I currently live. Marlboro was a little utopia on top of a mountain and my time there was magical. After I graduated, I moved around a lot, eventually settling in Chicago where I went to graduate school at Columbia College and lived for roughly nine years. In 2010, I was hired as an Assistant Professor at Keene State in New Hampshire (just 18 miles from Brattleboro), and I jumped at the chance to move back to Vermont. The main thing that I noticed was that as a student, I really knew very little about the town or its history. Moving back here was a big adjustment. Brattleboro is a very different and slower-paced place than Chicago, but now five years later, I can’t think of another place I’d rather live.

Change of pace, smaller community – were there any apparent ways your practice changed after moving?
My actual practice didn’t change, but some of the subject matter that I was drawn to did. I’ve mentioned that my work is really driven by my surroundings, after moving to Vermont by work began to focus more on nature and the landscape. You can see this in my projects The Last Snow In Brattleboro, A Man In Nature, Are You Here? 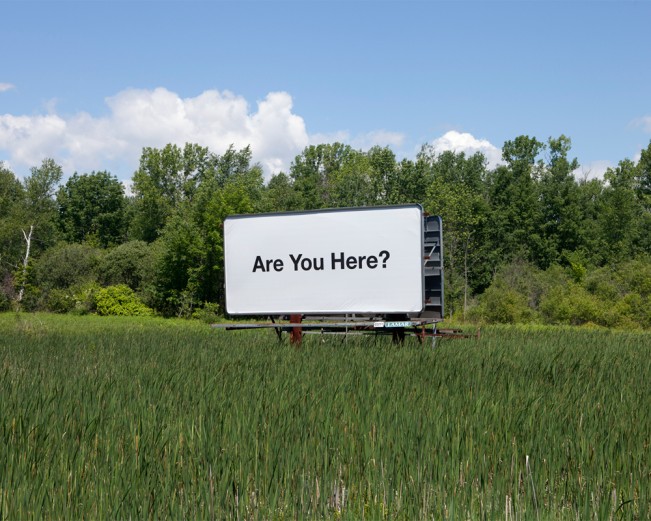 Let’s talk a bit about Are You Here?.  From a photography standpoint, this project intrigues me because people are constantly viewing the world behind a lens.  From the perspective of travel, especially longer distances, the landscape truly does fly by.  Your prompt is a simple question that greatly resonates with the viewer.  How did this project come about?

Two years ago, I went on a road trip with my family and kept seeing rest area road maps, all of which declared, “you are here.” I found this phrase to be really interesting, both in its tone and in its suggestion that place is determined by the physical space that we occupy rather than the place where our thoughts reside. I think that culturally we have become very detached from our surroundings. We use electronic devices to document and post our experiences rather than truly living them. Are You Here? is a public service announcement meant to address this impulse. 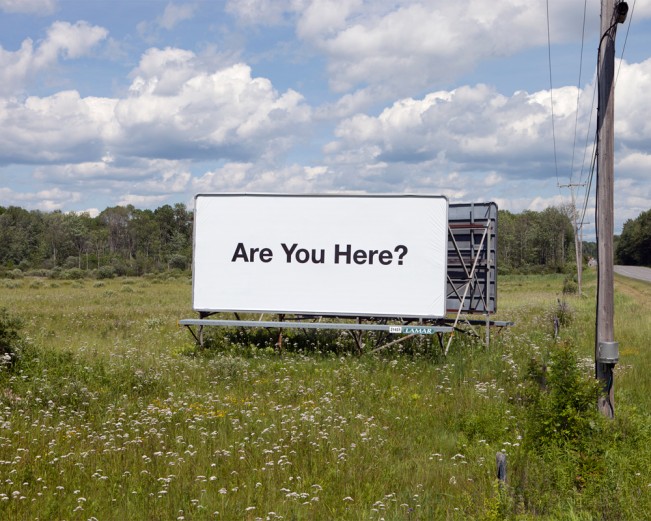 How did you choose the locations for the billboards?  Was there something in those spaces you thought everyone should experience?
There were a few factors that led to my billboard locations, the first being geography. Billboards are illegal in Vermont and so to rent space close to where I live, I focused on Upstate NY, Western Mass, and Connecticut. I wanted the billboards to be out in the country and somewhat isolated so that they would really jump out at people driving by. I also wanted to avoid placing them too close to businesses in order to avoid having them appear to be advertisements for a specific business. 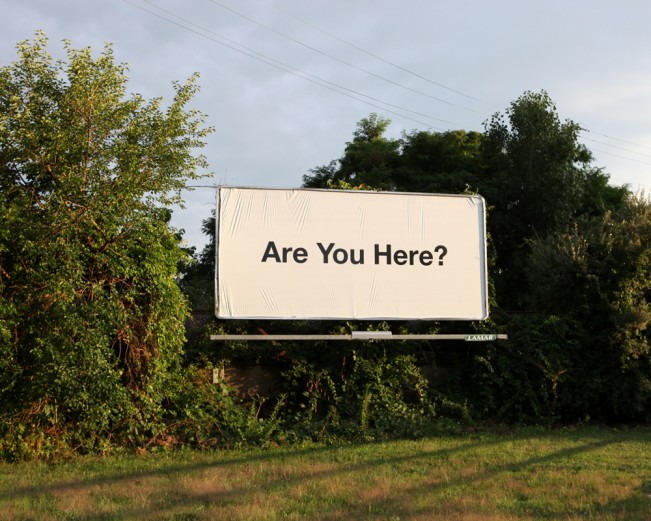 It seems like the themes in Are You Here? have been with you for a while.  Specifically I see you touching on this concept of presence within location in projects like A Man in Nature and The Car Project.  Are you always this aware of your surroundings, or does your practice force you to analyze what you would usually miss?

I think that all of my work is rooted in my undergraduate studies in literature and the philosophical writings of Albert Camus. His writings had a profound effect on me and my artwork. I saw a strong link between existentialism and the isolated and surreal images of 1950’s street photography (which I was making at the time). During graduate school, my work changed dramatically, and I began creating conceptual artist books, videos, and large graphic posters. It took some time before I made the connection that everything that I make stems from my earlier studies of existential philosophy and literature.

My interest in exploring the details of everyday life is the thread that connects all of my projects; wondering about shoes hanging on the telephone wires, collecting nightclub flyers left underneath the windshield wipers of my car, documenting the frequent theft of my garbage cans, trying to find the best place to stand on the train platform to get a seat for my morning commute, noticing the last piles of snow in my town after an especially harsh winter. My art practice helps me to be more attentive to my surroundings as well as to better understand them. 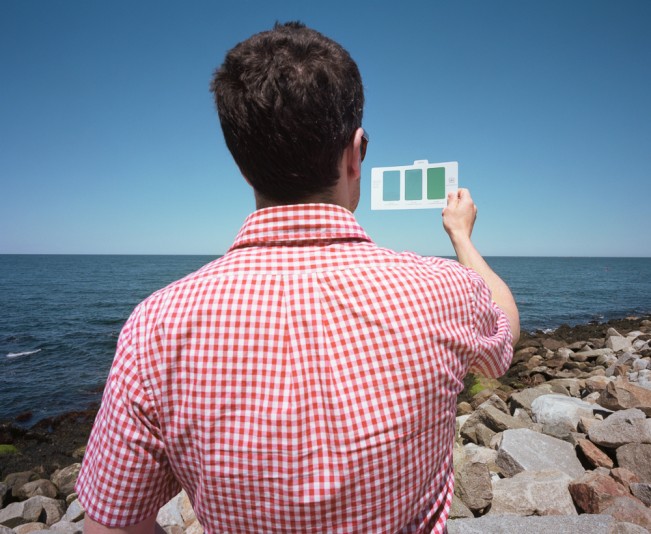 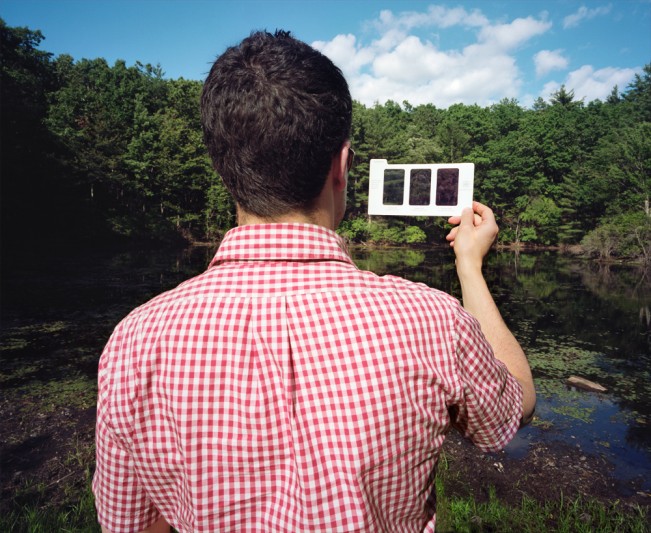 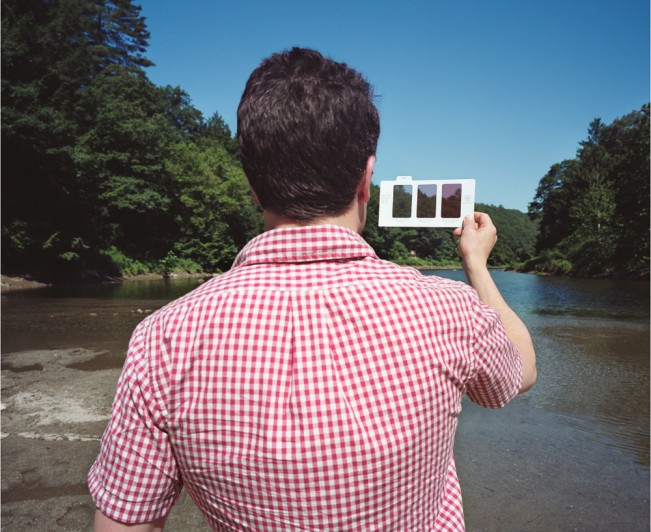 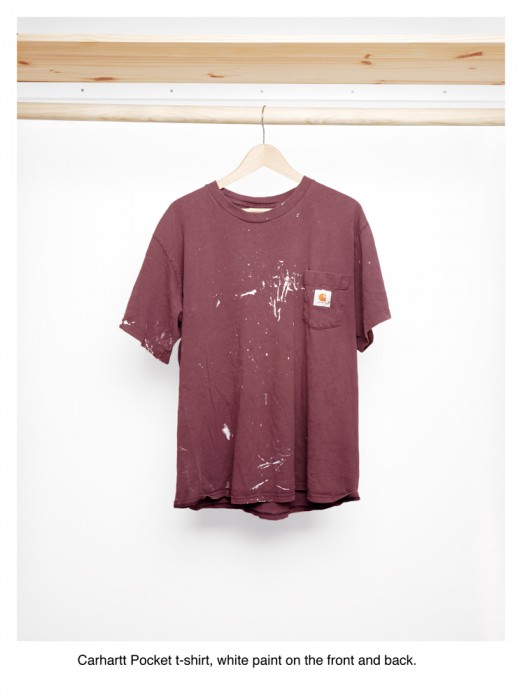 There is an obsessive nature to many of your projects.  I see that you are constantly collecting, categorizing, and even organizing many of your ideas.  Can you speak more about order in your work?

The collection, categorization and organization of materials is the process by which scientists understand and make sense of the world. I see my work as utilizing these same strategies, only in my case the results are often inconclusive and ostensibly absurd. My photographic projects typically take the form of typologies. I’m interested in how this approach, which can often be interpreted as being “straight” or “scientific,” can take on a kind of dry humor when applied to seemingly mundane subjects like in my project, Items Of Clothing Secretly Hidden By My Girlfriend (So I Wouldn’t Wear Them Anymore). 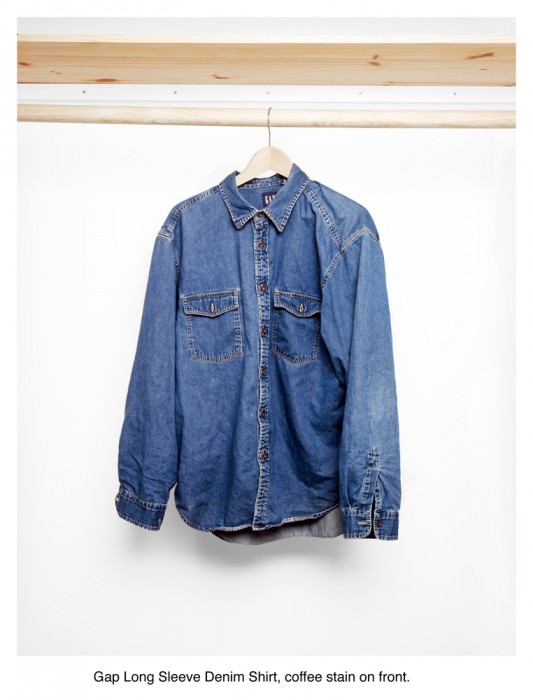 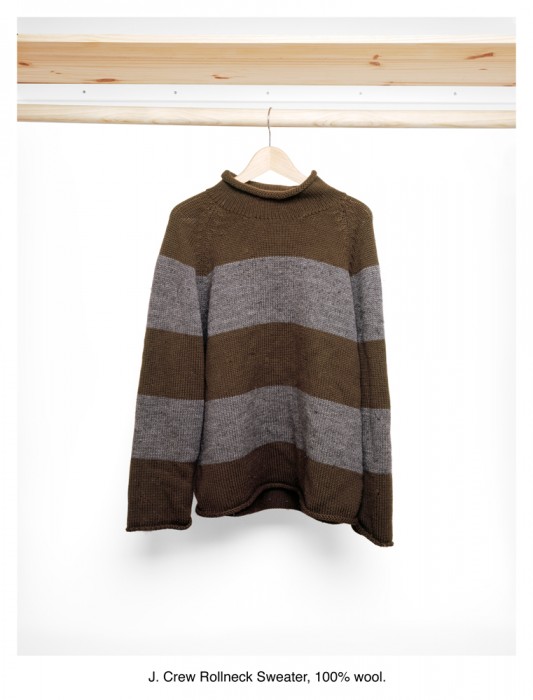 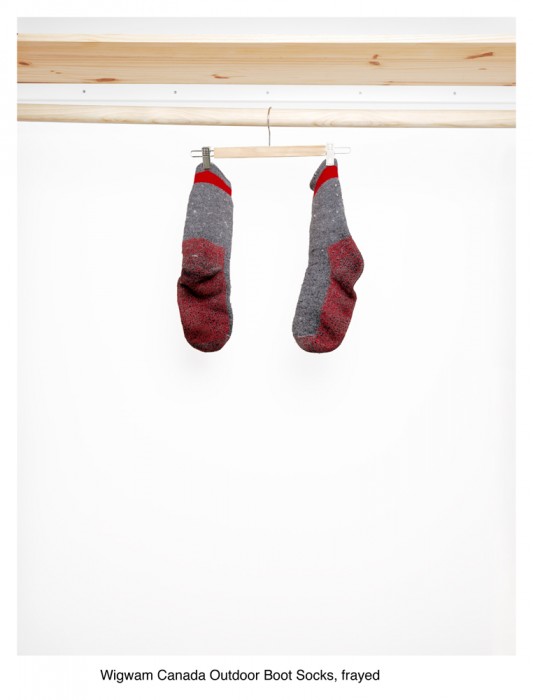 Are you currently working on a new Vermont related project?

I’m currently a finalist for an NEA public art commission here in Brattleboro. I’m working with another Brattleboro resident, architect Michael Becker, and our proposal involves building a permanent structure on the riverfront which would function as a camera obscura. We’ve chosen the location of the old Brattleboro gas holder tanks. These tanks stored the gas that provided light for the town in the 1800s. Our design is an architectural replica of the original structure. The idea is to create a public artwork that uses light as its source to reference the older structure which was the source of the town’s light. We’ll find out if we got it in a couple of weeks, keep your fingers crossed! 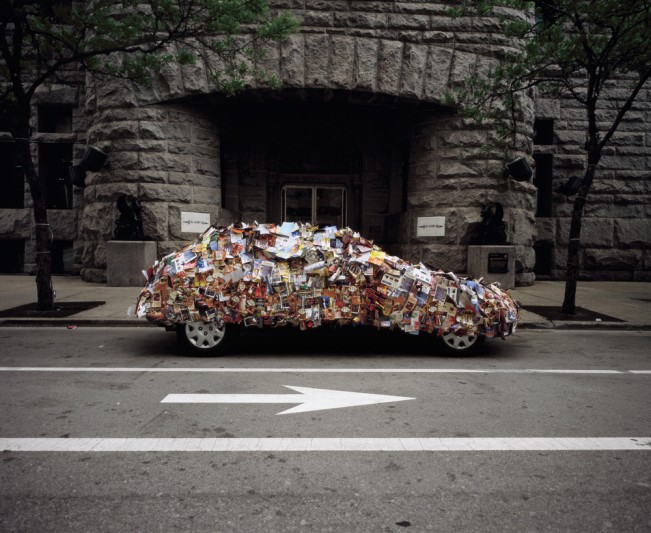 It would definitely start by sleeping in. My perfect day would consist of hanging out by the ocean with my wife and two kids. Smelling the ocean air, exploring tidal pools, swimming. Finish it off with cocktails and a proper meal cooked on the grill… it doesn’t get much better than that! 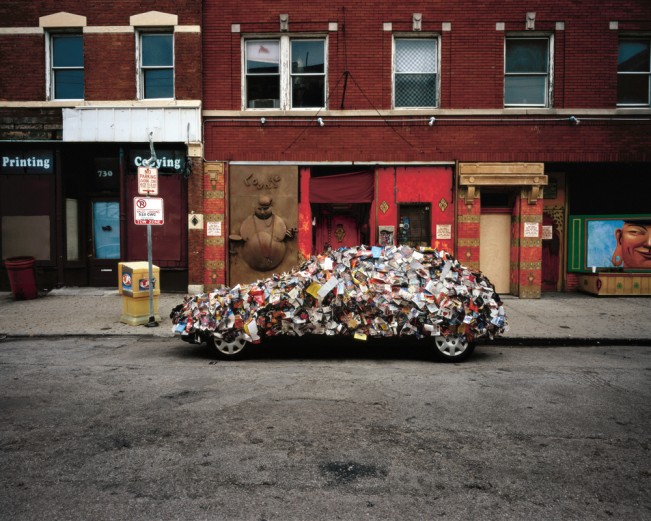 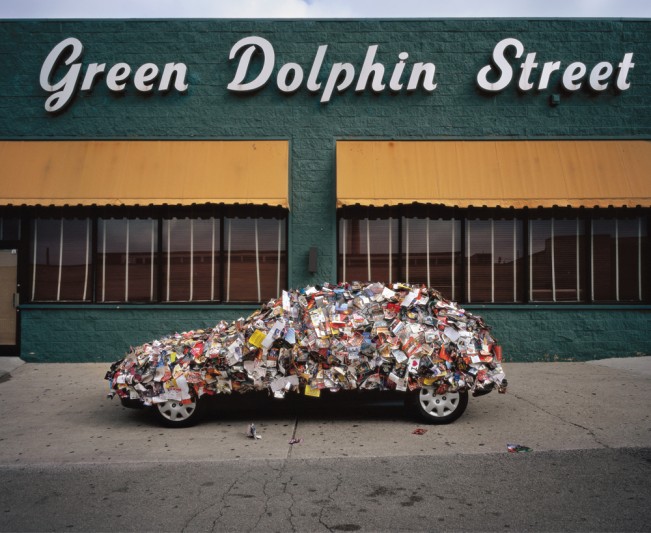 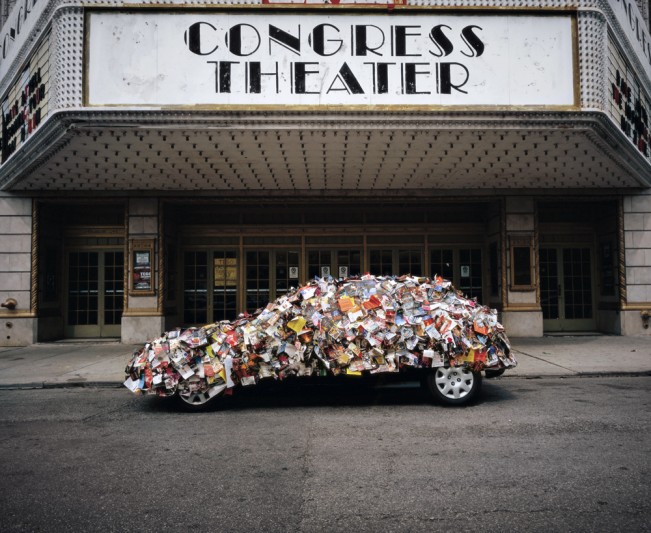