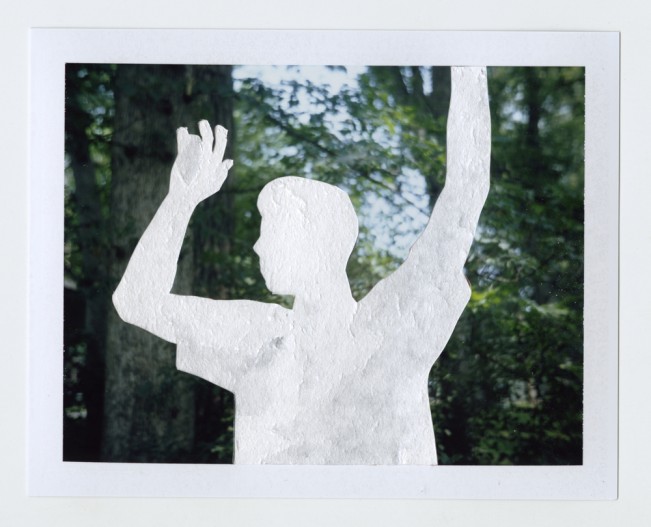 RayKo Curator Ann Jastrab states: Femme Papel, sounding similar to Femme Fatale, features incredible works by innovative women who push the boundaries of the definition of photography. And also the creation of it. Some of these photographers are from the San Francisco Bay Area, using RayKo’s darkroom facilities to pull their one-of-a-kind mural-sized chromogenic prints out of their color processor. Others have flown into San Francisco to Rayko’s B&W mural darkroom to make huge gelatin silver prints. Others are unfurling large sheets of paper coated with cyanotype chemistry into the sea and pulling them back before the waves can take them and before they can totally develop into a deep intense blue. 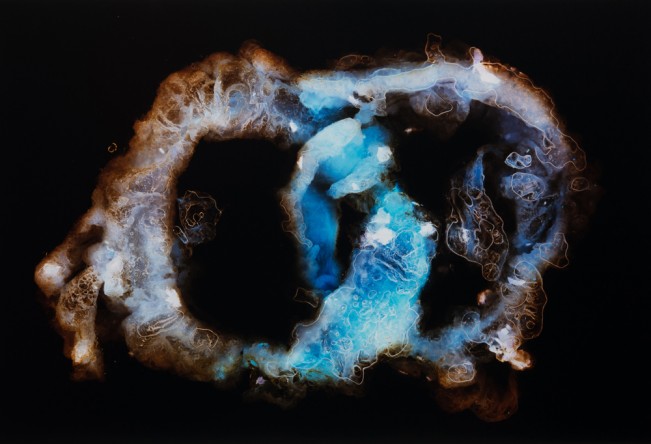 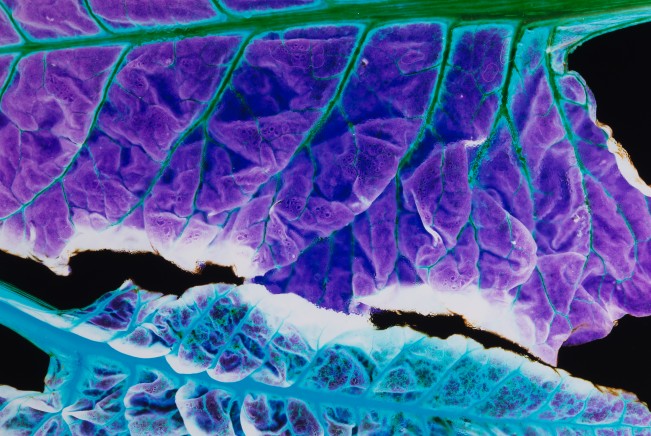 Johnna Arnold’s new images from her series, Abundance incorporate the color darkroom and the cliché verre process. Arnold shines light through lost and forgotten objects using a photographic enlarger to create large printed negatives of the world around her. With a simple curiosity and an appreciation for the traditional darkroom, she began her experiments wondering what it would look like if she were to put otherwise disposable aspects of her life into the enlarger, where a photographic negative usually goes. In working this way the enlarger presents its relation to a scientific microscope, and as the slightly¬ mad scientist, she seeks to gain information and to show appreciation for the unexpected details within objects that were in some way left behind. By decontextualizing items and showing them in a new light, there is an impetus to reconsider our relationship with these commonplace aspects of our daily lives. The abundance of our current lifestyle both impresses and concerns the artist. She sees our current time in history shaped by a level of copiousness that does not appear sustainable. Time plays into the quality of these objects, as the intricacies of decay adds complexity and beauty. Through magnifying unappealing objects (for example, one gorgeous image is a pair of greasy onion rings), Arnold emphasizes the magical beauty that lies before our very eyes. 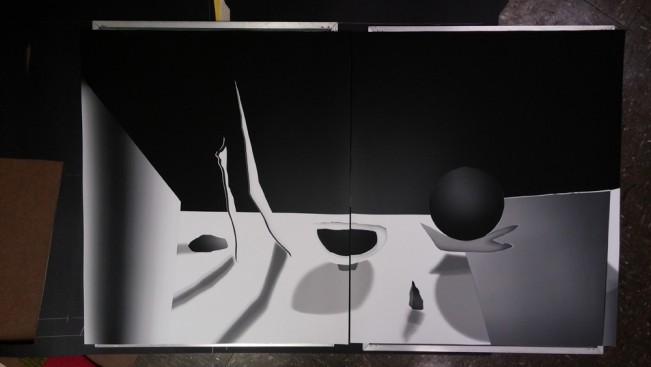 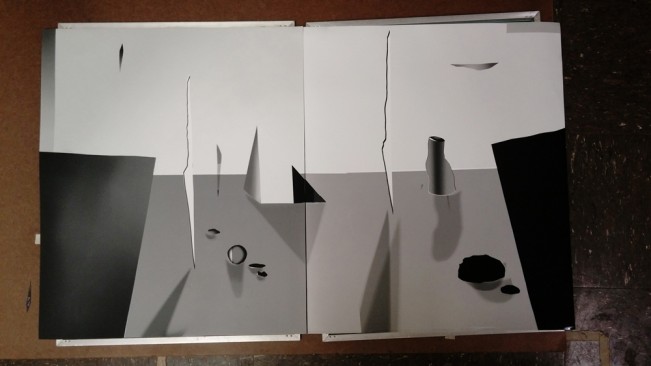 Jenna Kuiper will unveil her project, Drawing in the Dark, which began in the darkrooms of RayKo and Kala. Her large-scale photograms bring the intentions of drawing to the materials of photography. Trained as a painter, Kuiper came across this process by accident while teaching middle-schoolers at a summer arts camp. The different grays achieved through timed light in the darkroom reminded her of the value scale in drawing. With this in mind, she set about creating prints with controlled light and cut-up shapes. She often refers to her process as drawing in the dark.

Stones, daggers, ceremonial vessels, and geometric drawing forms come together in unusual and private altars spaces. Bringing these still-life forms to the darkroom subverts the nature of drawing: image-making is based on conjecture rather than sight and once developed the results cannot be changed. The unseen and unknown is given precedence. Kuiper finds ceremony in this process. The darkroom acts as a space between light and dark, form and dissolution, the seen and unseen, known and unknown. It is a special processing space. Alone on her knees for hours in the dark, she is moving shapes, orchestrating light, and working with unforeseen results. Using cut up shapes, complex burning, and dodging techniques, and a fiber-based, matte, silver-gelatin paper, these unique prints are made with materials that harken back to the beginnings of photographic history. Through this process, Kuiper aims to challenge the ubiquitous nature of photography and to appreciate the medium beyond its depiction of the seen world. 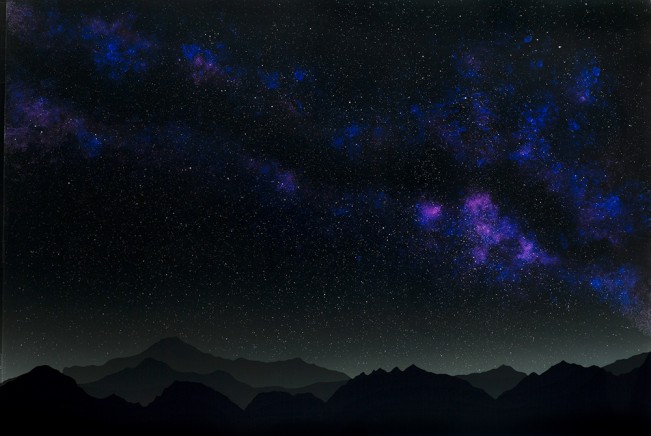 Vanessa Marsh has also been hunkering down in the RayKo darkrooms, for more than a year since her artist residency ended. She is on to something, for sure, exploring the intersections of man-made, natural and cosmological power through a mixed media process based in photography. Marsh remembers as a child the first time she looked intently out into a starry sky. She was away at summer camp up in the San Juan Islands, and they were sleeping outside in a field by their cabin. It was dark enough to see the Milky Way; so dense it looked like a large smudge of light across the sky. Her counselor explained that the light we were seeing took so much time and crossed so much space that the stars it was coming from may not even exist anymore. Marsh doesn’t remember when she fell asleep that night, but she knows it was awhile that she lay there staring up, her heart pounding, realizing the vastness.

Looking back, Marsh has identified those moments as her first, and so far her most intense experience of the sublime. That intimate time with the night sky led to a life-long interest in the workings of the cosmos, the physics of light and photographic process. Within her work, she brings to form imagined landscapes and intensely starlit skies, highlighting both a personal as well as a collective experience of the world. Her goal is to create a relatable false reality, one that highlights the moments in our lives when we felt the most connected to the cosmos while underscoring the disconnect of our daily lives.

Marsh’s photographs are made through a personally developed process involving drawing, painting, and darkroom techniques. The work is intended to be a space for the viewer to contemplate their place in the universe and to consider how we understand the real and truth in contemporary experience. Currently, she also has three large-scale pieces on view at the Contemporary Jewish Museum in their Night Begins the Day exhibition. 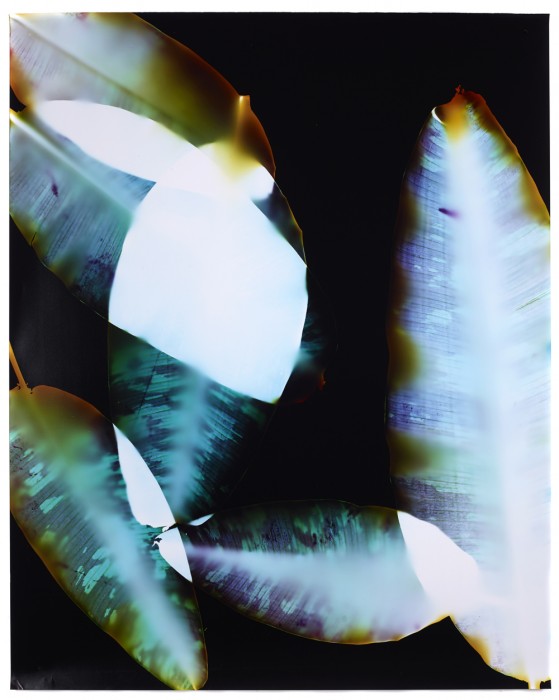 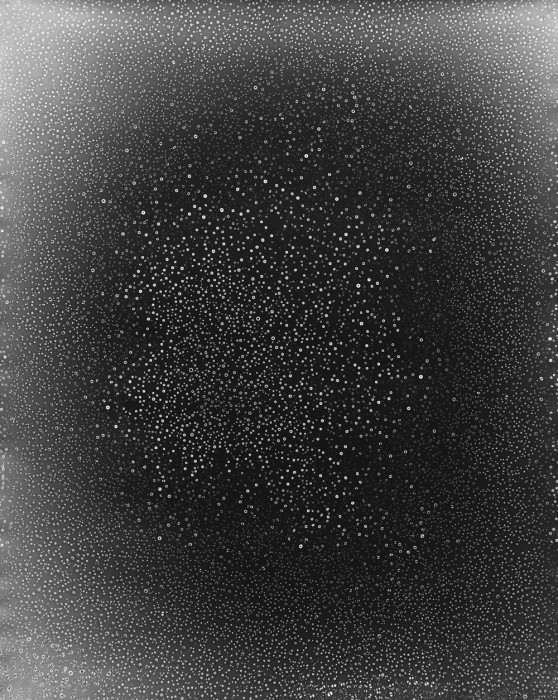 Klea McKenna wants to make an imprint of a place – both visual and emotional – rather than a picture of it. With this in mind, she rarely “takes” photographs. Instead, she devises ways that light sensitive materials, analog photographic paper and film, can interact directly with the landscape to reveal something unexpected, something that decodes the way we experience place. McKenna uses a variety of crude strategies; hand-made cameras, outdoor photograms, and methods of folding film and paper to create sculptural photographs. This experimental approach transforms the familiar, yielding unlikely images that refer to location and subject only through light and form. The flawed material of the film or paper often becomes as visible as the image it has captured.

Rain Studies is one of the projects she’ll be showing here at RayKo (some of these works are also on display currently at the Contemporary Jewish Museum). This series began while visiting a piece of land that McKenna had lived on as a child – a rural one-room house on the volcanic slopes of the Big Island of Hawaii. She was making work in reaction to the emotional and physical volatility of that volcanic landscape. Heavy, tropical rain was such a big part of that place and so was darkness because during the early 1980’s they had lived deep in the forest without electricity. She began experimenting with capturing rain patterns in photograms on gelatin silver paper – made outdoors, at night – and it evolved into this series of rain studies. Lately, she has been working with lighter California spring rain with has had much smaller drops and has found that every storm looks different. McKenna will also be showing selections from her color photogram series, How Forests Think. 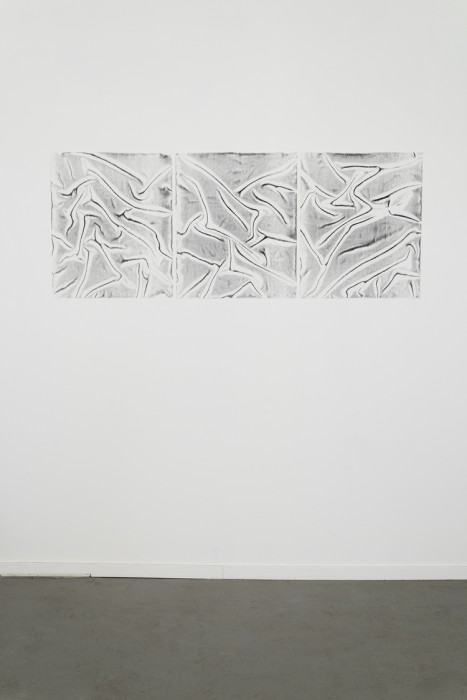 Maggie Preston has been experimenting in the darkroom for years. The works in her series, Black Velvet are created by simply dropping a piece of black velvet onto photographic paper, exposing and then developing it, the result being a very bare bones photogram. The use of black velvet is significant; in photography it usually functions as a backdrop, whose whole purpose is to disappear and offer an empty shadowless field for a chosen subject. It is an eraser in a way; that erases itself. Preston flips the equation and uses this cloak of invisibility as the central subject, where it can instead imprint itself, its materiality is finally given a shape. She repeats the process many times and displays multiple “takes” together, to give more weight to the seemingly inconsequential subject. 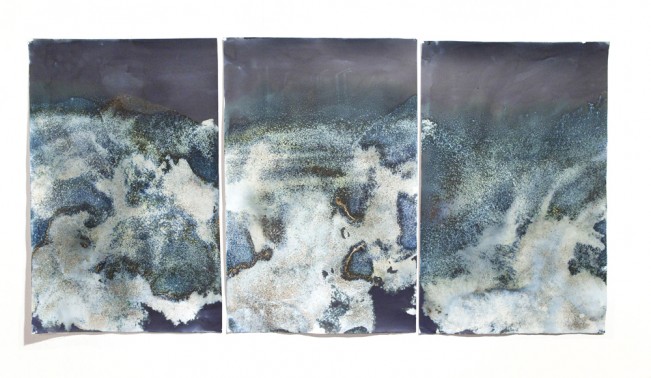 Meghann Riepenhoff’s work stems from her fascination with the nature of our relationships to the landscape, the sublime, time, and impermanence. Titled Littoral Drift, a geologic term describing the action of wind-driven waves transporting sand and gravel, the series consists of camera-less cyanotypes made in collaboration with the landscape and the ocean, at the edges of both. The elements that she employs in the process—waves, rain, wind, and sediment—leave physical inscriptions through direct contact with photographic materials. Photochemically, the pieces are never wholly processed; they will continue to change over time in response to environments that they encounter, blurring the line between creation and destruction. As part of the larger project, Riepenhoff selectively re-photographs moments in the evolution of the images, to generate a series of static records of a transitory process. Titled Continua, the progressive images are shown as polyptychs. Perhaps where the fugitive cyanotypes are analogies for a terrifyingly fleeting and beautiful existence, the process of re-photographing them is a metaphor for the incorporation and mediation of photography in the contemporary human experience. Riepenhoff, like Marsh, McKenna, and Preston, has been an artist-in-residence at RayKo Photo Center, where her love of traditional materials earned her a residency. 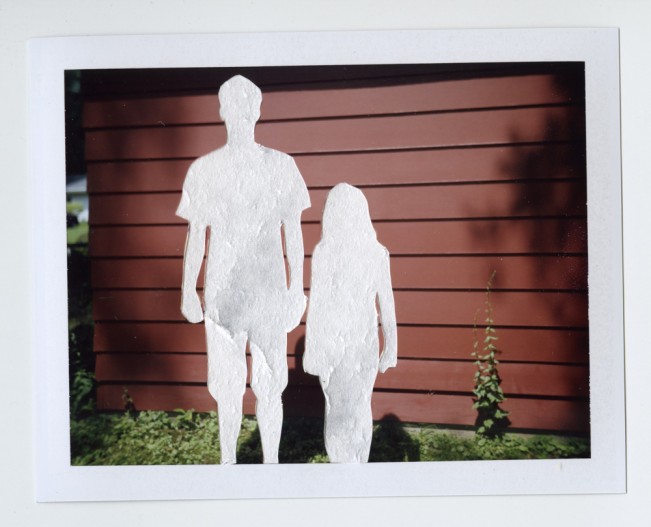 And last but not least in this group of fearless women is Sonja Thomsen, a Milwaukee-based artist whose multifaceted practice combines photography, sculpture, interactive installation and site-specific public art to create spaces reflective of our own perceptions and potential. Since earning an MFA in photography from the San Francisco Art Institute (2004), her work has evolved in myriad ways. In her practice, she has become more and more concerned with space and our perceptions of one’s own scale in a space. An attempt to make “the space between” perceptible. Thomsen has been working with the specifics of materiality in her practice and continues to be fascinated with the dichotomy of the emulsion and paper, one holding the illusion of depth in its glossy shadows and the other the matte fibers of form. The Effaced Polaroid series is one of many projects that Thomsen is currently developing. These pieces are made in the “in between” moments of her larger studio practice. A quick peel that feels gestural and unpredictable. The defacing of the Polaroid, a one-of-a-kind photograph feels right- one-offs – Serendipity is at play. Thomsen is also interested in how the peeled figure disrupts the scene – a push/pull happens as the underlayer of the photograph is revealed on the surface. The origin of the Polaroids is from her archive – snapshots of friends and family- used as raw material for experimentation.

RayKo Photo Center & Gallery is a comprehensive photographic facility, located near the Yerba Buena Arts District, with resources for anyone with a passion for photography. Established in the early 1990’s, RayKo Photo Center has grown to become one of San Francisco’s most beloved photography darkroom spaces; it includes traditional b&w, color and alternative process labs as well as a state-of-the-art digital department, a professional rental studio, galleries, and the Photographer’s Marketplace – a retail space promoting the work of regional artists. RayKo also has San Francisco’s 1st Art*O*Mat vending machine and a vintage 1947 black & white Auto-Photo Booth and a retail store that sells all types of used film cameras, from view cameras to Leicas to a build-your-own Nikon station. Everything you need to make any type of photograph!

RayKo Gallery serves to advance public appreciation of photography and create opportunities for regional, national and international artists to create and present their work. RayKo Gallery offers 1600 square feet of exhibition space and the Photographer’s Marketplace, which encourages the collection of artwork by making it accessible to collectors of all levels. RayKo also has an artist-in-residence program to further support artists in the development of their photographic projects and ideas.