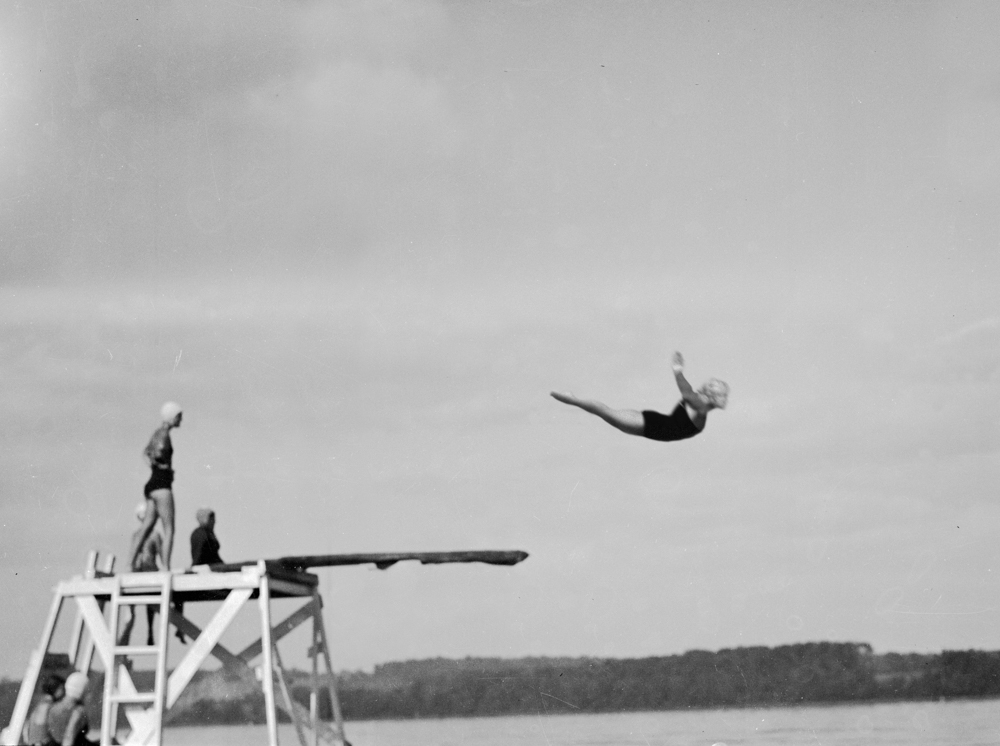 ©Jennifer Greenburg, Diving off the shores of Lake Michigan, 2012

Congratulations to Jennifer Greenburg for her third place win in CENTER’s Exhibitors Choice Awards. Her continuing series, Revising History, allows her to visit the past as she inserts herself into vernacular photographs. As she states, “My intervention in these found vernaculars is how I hope the series engages the audience in a conversation about the way we interpret the media, record personal memories, and establish collective history”. Currently, Jennifer has a solo exhibition at jdc Fine Art in San Diego, CA running through May 28, 2016, curated by Jennifer DeCarlo.

Jennifer Greenburg is an Associate Professor at Indiana University Northwest.She holds an MFA from The University of Chicago and a BFA from the School of the Art Institute. Solo exhibitions of her work have been held at the Hyde Park Art Center, The Print Center, and many other places. Greenburg’s work has been included in numerous national and international group exhibitions. Light Work awarded her an Artist in Residency in 2005. Her work is part of the permanent collections of Light Work, the Museum of Contemporary Photography, the Santa Barbara Museum of Art, and the Museum of Photographic Arts. Jennifer Greenburg’s monograph, The Rockabillies, was published by the Center for American places in 2009 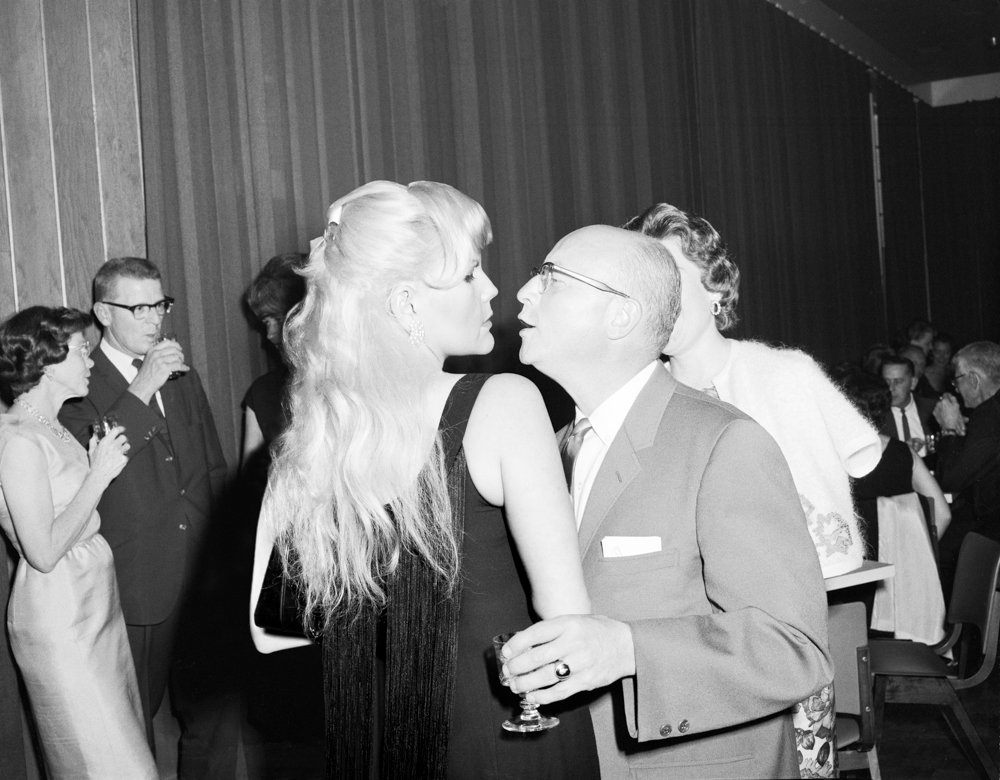 The overall quality of the submissions to Center’s Awards this year made it extremely challenging to choose only three bodies of work for the new Exhibitions Choice Awards. Each of the following projects could easily capture a viewer’s attention and spark their imagination when shown in galleries or on museum walls. In Reviving History, Jennifer Greenburg seamlessly inserts pictures of herself into old family photos lending a little humor to our troubling times. It’s a new kind of fantasy performance art that is deftly done. 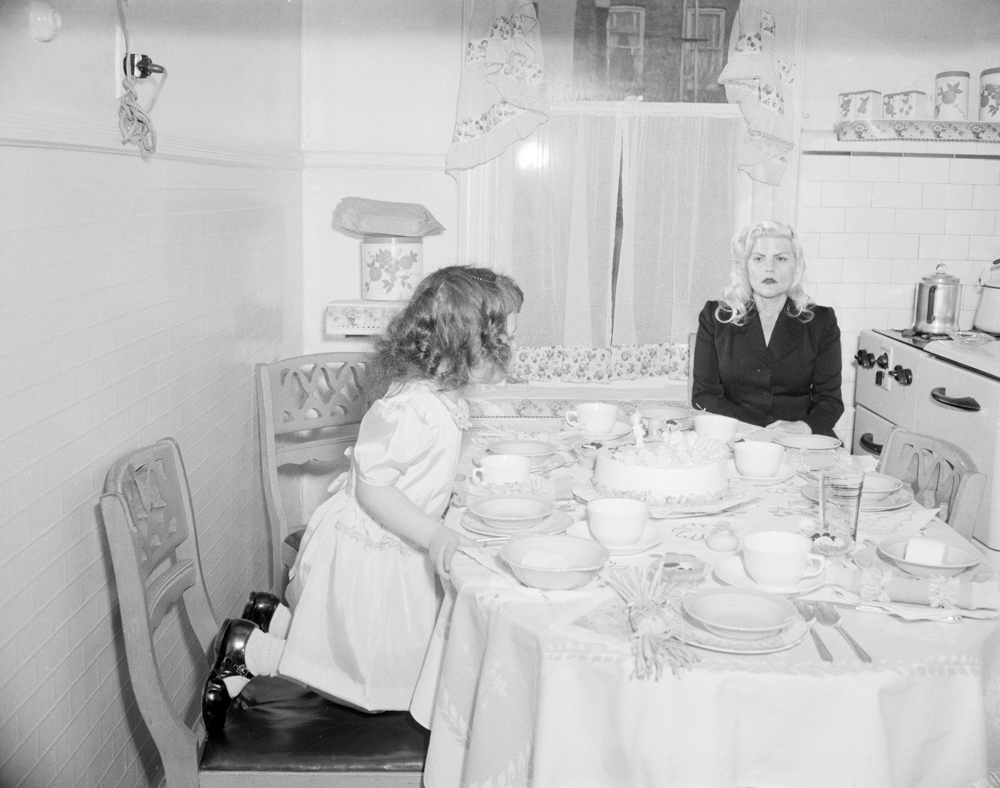 ©Jennifer Greenburg, I have always preferred my own birthday, 2015

Revising History is a study on photography, the nature of the vernacular image, and its role in creating cultural allegories. The work intends to create a dialogue about the photograph as simulacrum- the moment versus the referent. To engage these layered truths I replace the central figure in found midcentury (1940’s –1960’s) vernacular photographs with an image of myself. In doing so I effectively hijack the memory and create a “counterfeit” image. Most do not stop to think about the ubiquitous nature of the camera or the impact of pictures, but snapshots now intervene in almost every aspect of life – the pinnacle and the banal. The danger in this is we seem to have forgotten that the picture liberates the moment from reality, erases vantage, and is inevitable susceptible to co-opted or underwritten fantasy. 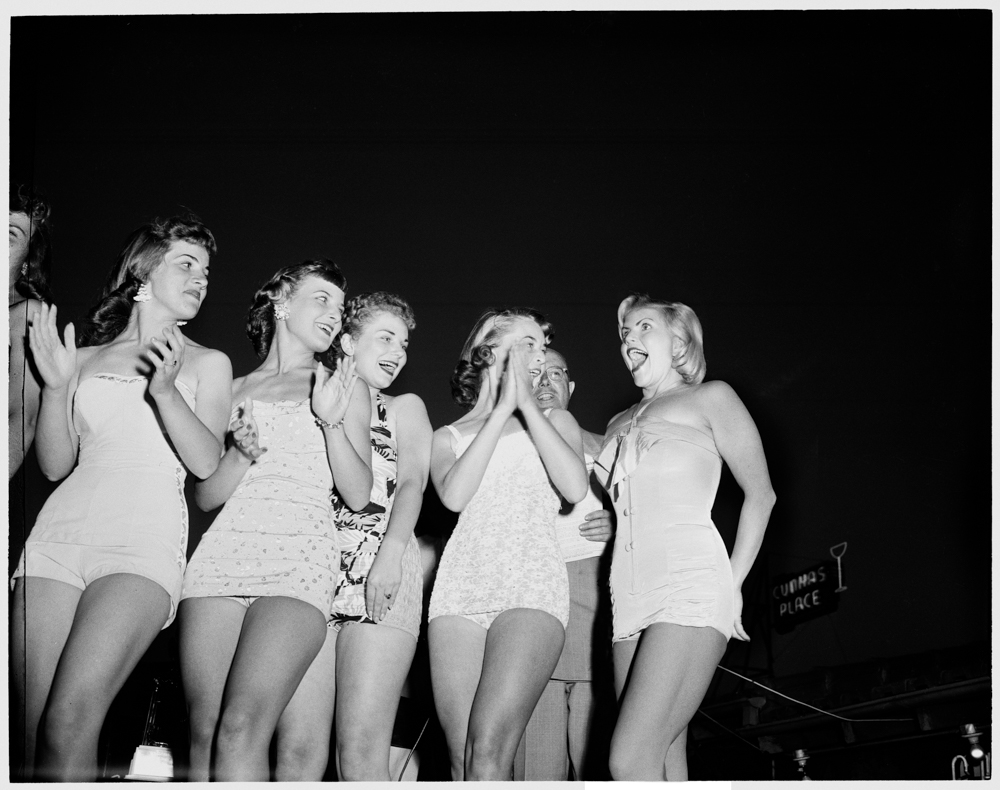 ©Jennifer Greenburg, I was not the thinnest, nor the prettiest, but I was the winner! 2015

Early works in Revising History speak to idealized moments. I become something of a period heroine graduating from finishing school, singing at a St. Patrick’s Day party, performing a perfect swan dive, and more. Recent additions to the series begin to break these conventions, and include awkward moments or point to historical oversight. Mid-century America is often idealized as a purer, simpler time, when it ought to be remembered for its inequity and stirring unrest. Images help us remember selectively, and the myth around the period perpetuates, in part, via collective vernacular contributions. 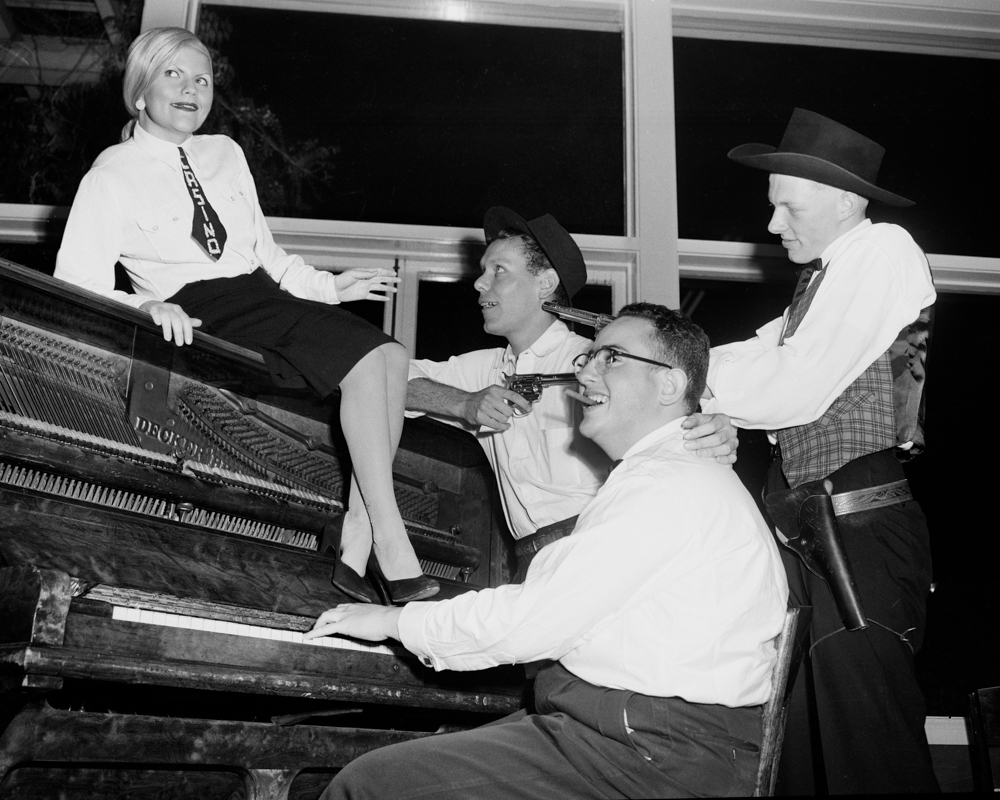 ©Jennifer Greenburg, When they lifted me on to the piano, I had no choice but to oblidge, 2016

My studies of vernacular photography lead me to conclude that we share nearly identical visual narratives. Documented moments are parallel if not nearly identical. I have further discovered that conventions of composition, lighting, and expression are closely followed without much variation. If such visual conventions underpin vernacular photographs, then it is reasonable to infer that the end result is not particularly unique to the person or place represented within the image. The end result is merely a duplicate of all other similar image-types. It is as if we are making these images to prove not only existence but also to testify belonging, happiness, and our accomplishments. However, these images prove our conformity more than our uniqueness. The purpose of transforming the “originals” is to underline existing and universally understood allegories. The creation of the “counterfeit” transmogrifies the “original” into an iconic symbolization of a type of moment. My intervention in these found vernaculars is how I hope the series engages the audience in a conversation about the way we interpret the media, record personal memories, and establish collective history. 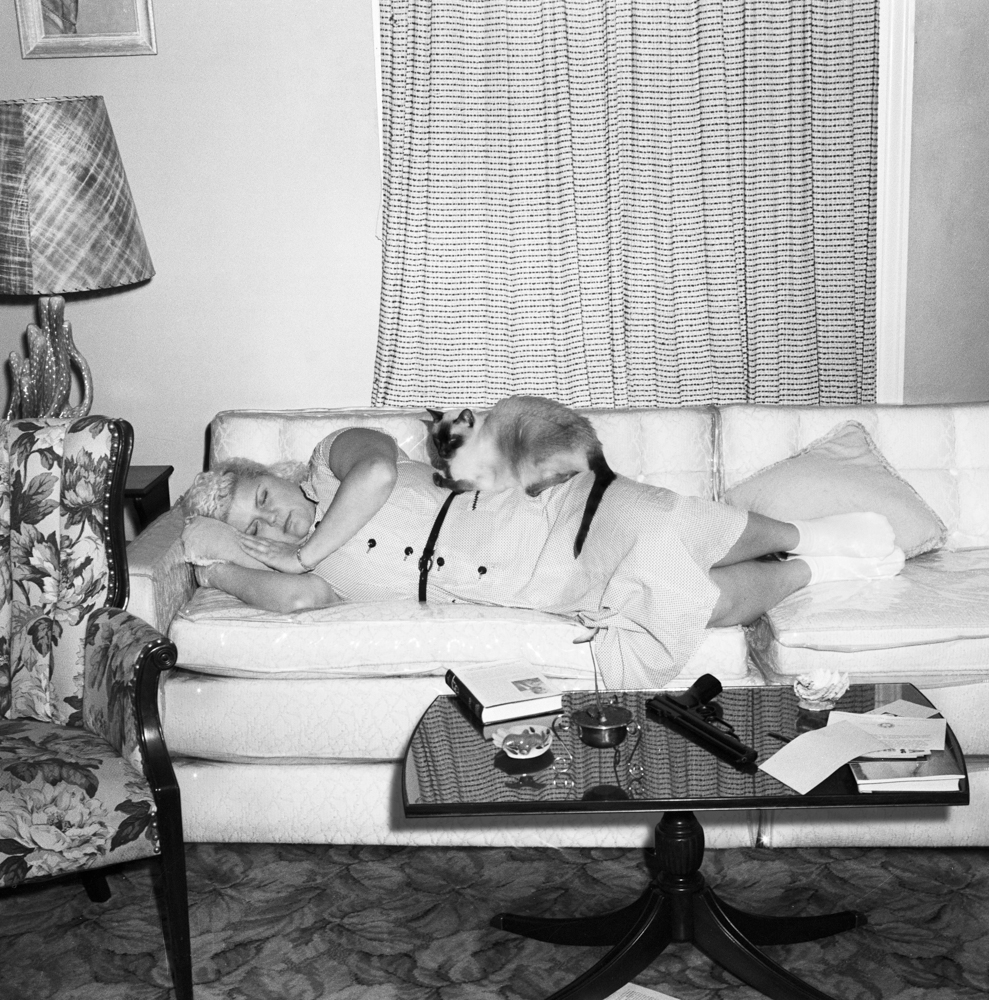 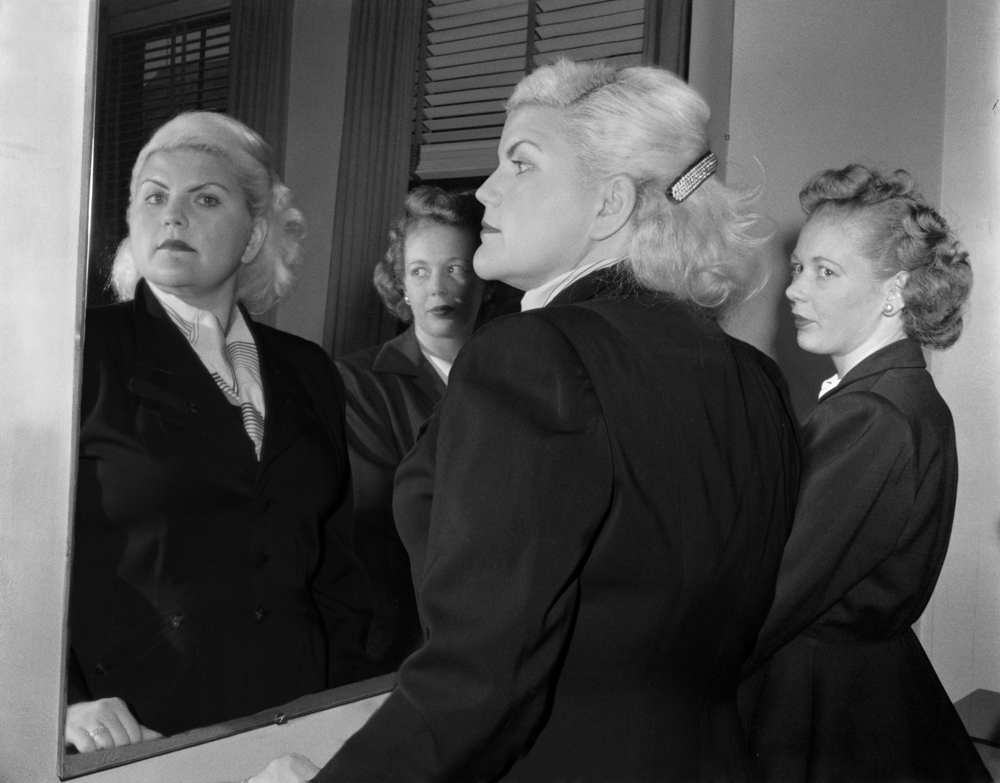 ©Jennifer Greenburg, My coworker was always jealous of my blonde hair, 2013 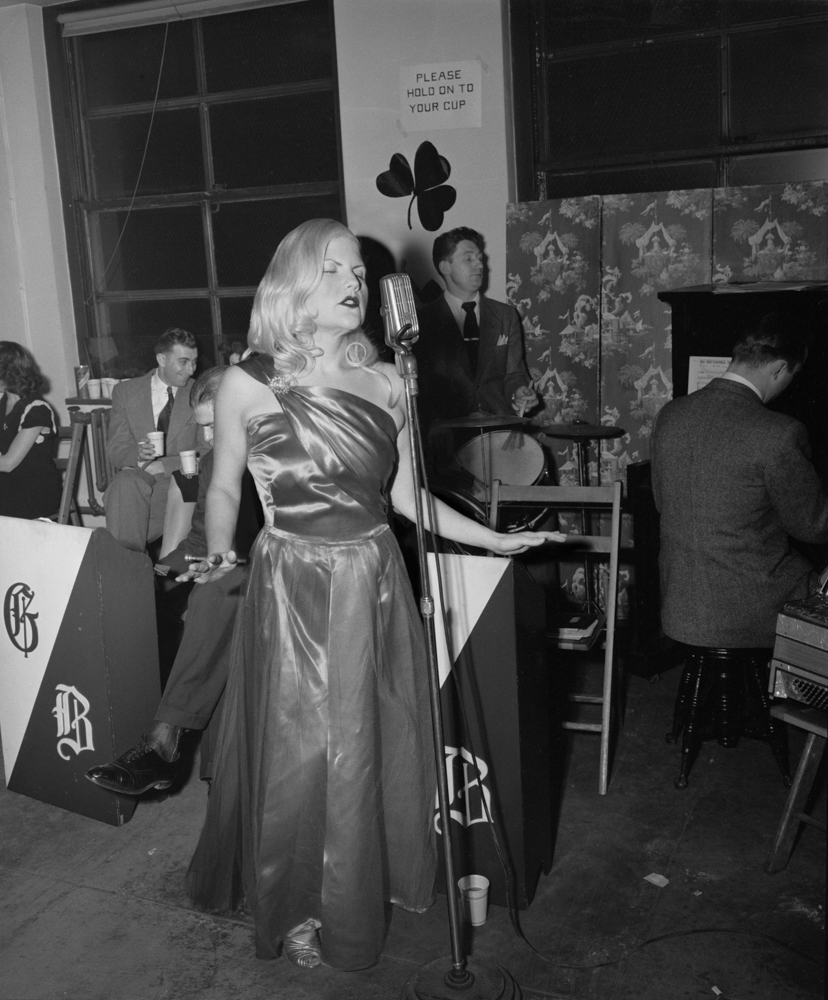 ©Jennifer Greenburg, Two years later, I was drunk enough to sing at the St. Pat’s Party. How embarrassing! 2014 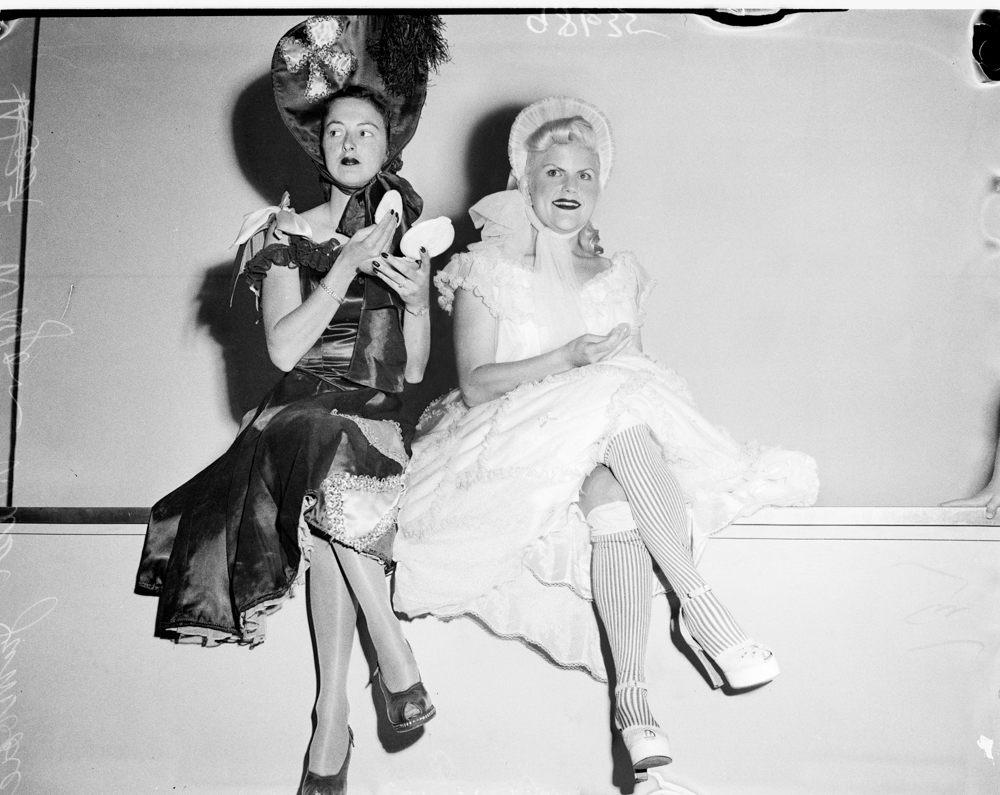 ©Jennifer Greenburg, Of course we all wanted to look like Peggy Castle at the Wagon West party, 2014 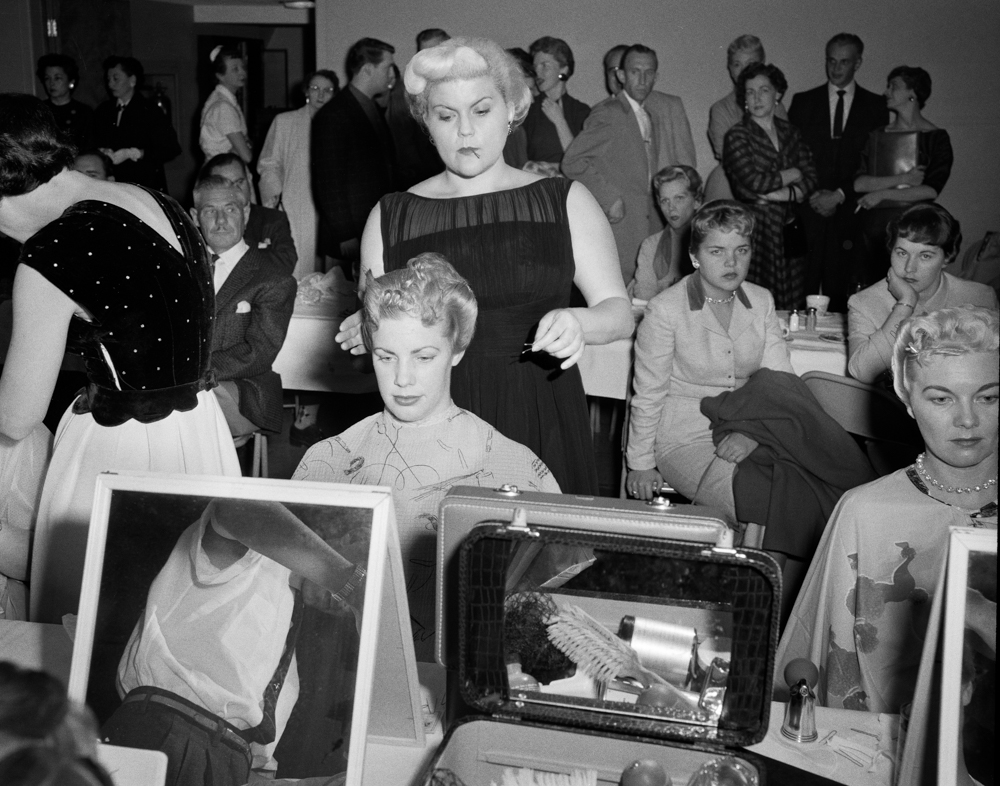 ©Jennifer Greenburg, My dreams came true the day I did hair for a fashion show, 2013 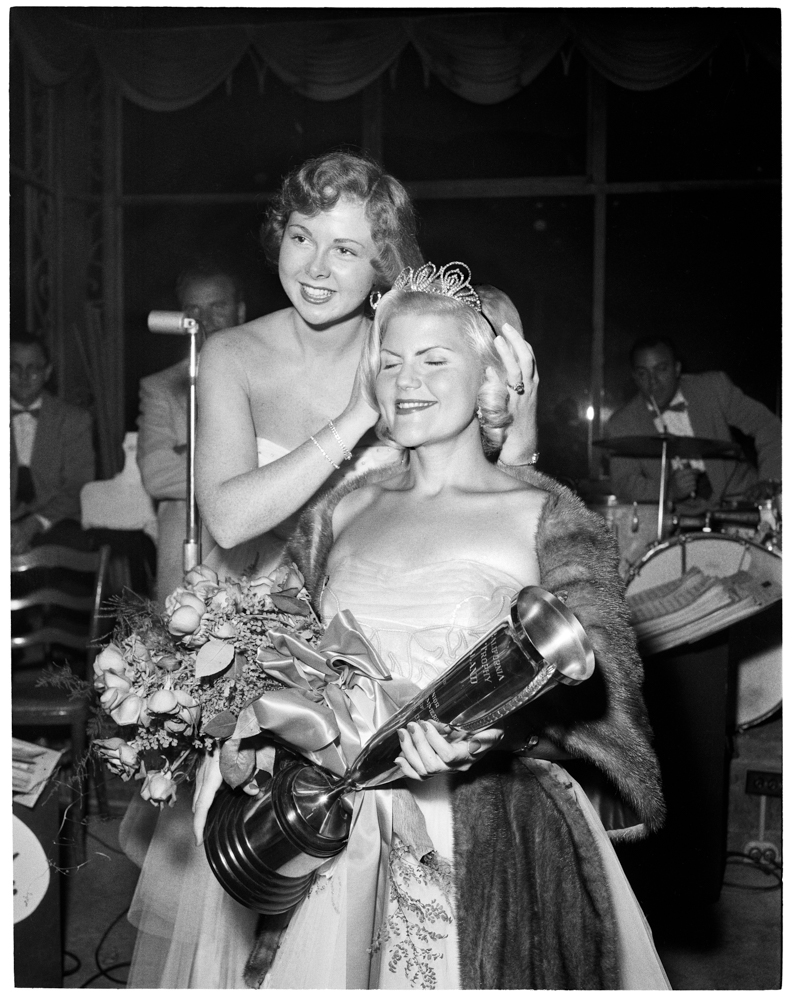 ©Jennifer Greenburg, It was finally my day! 2015 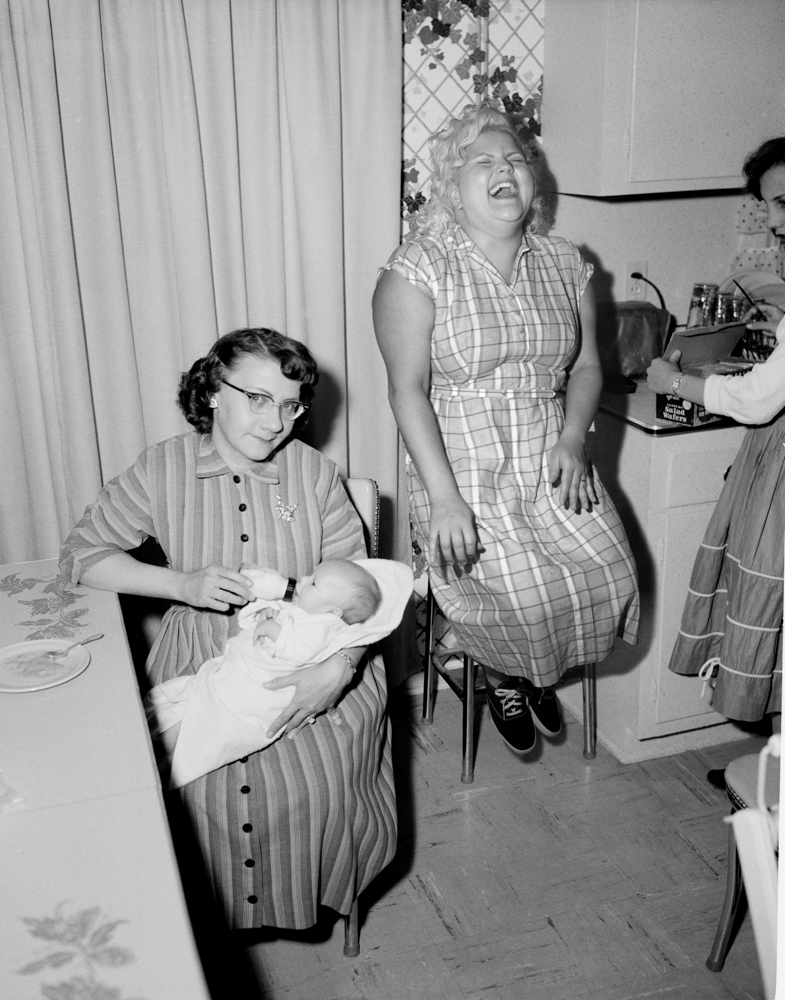 ©Jennier Greenburg, Something funny happened in the kitchen, 2011 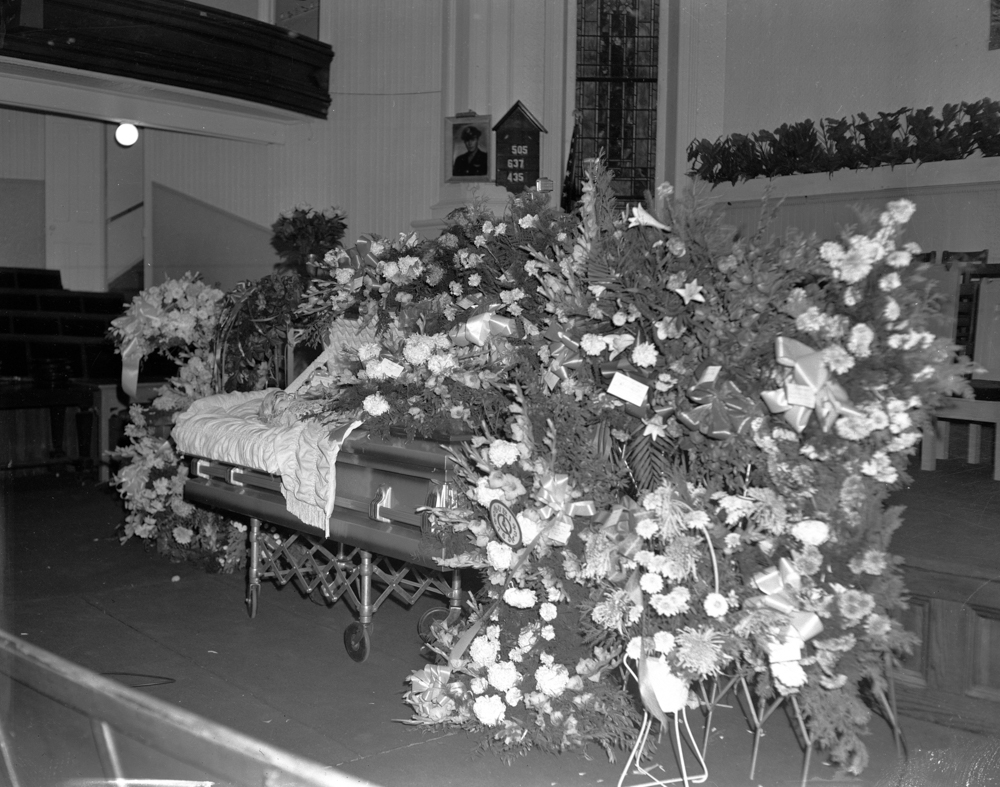 ©Jennifer Greenburg, Our first joint task as a married couple, 2013 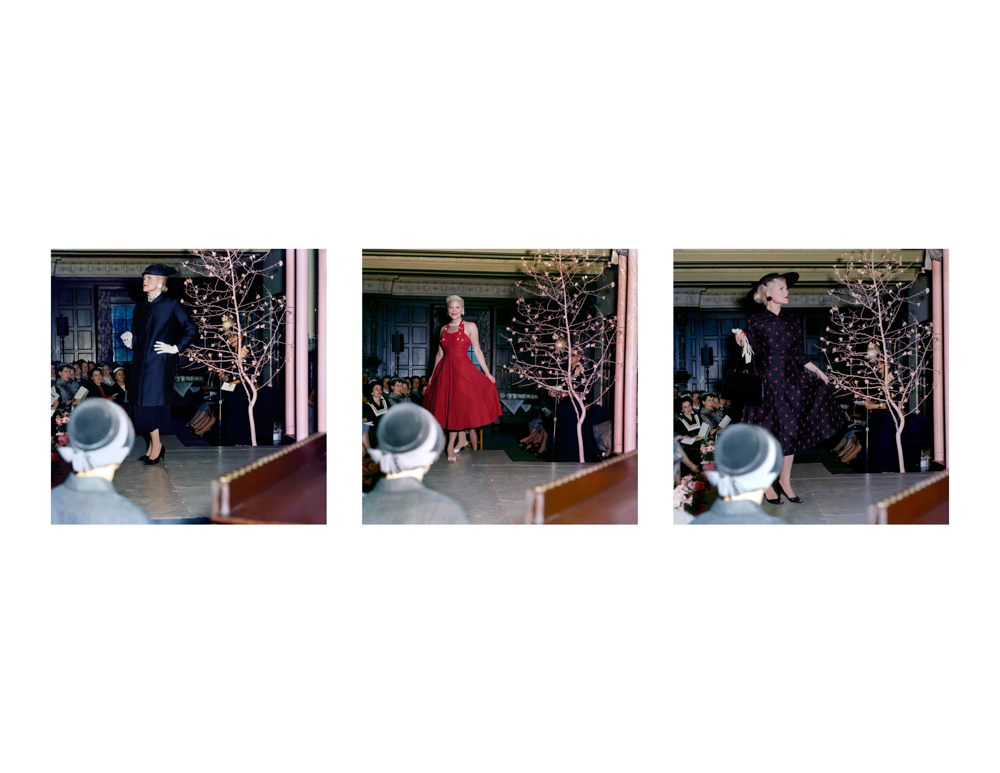 ©Jennifer Greenburg, Sadie Cohen was upset that I got to model in the Hasassah fashion show. She didn’t speak to me for weeks! 2015