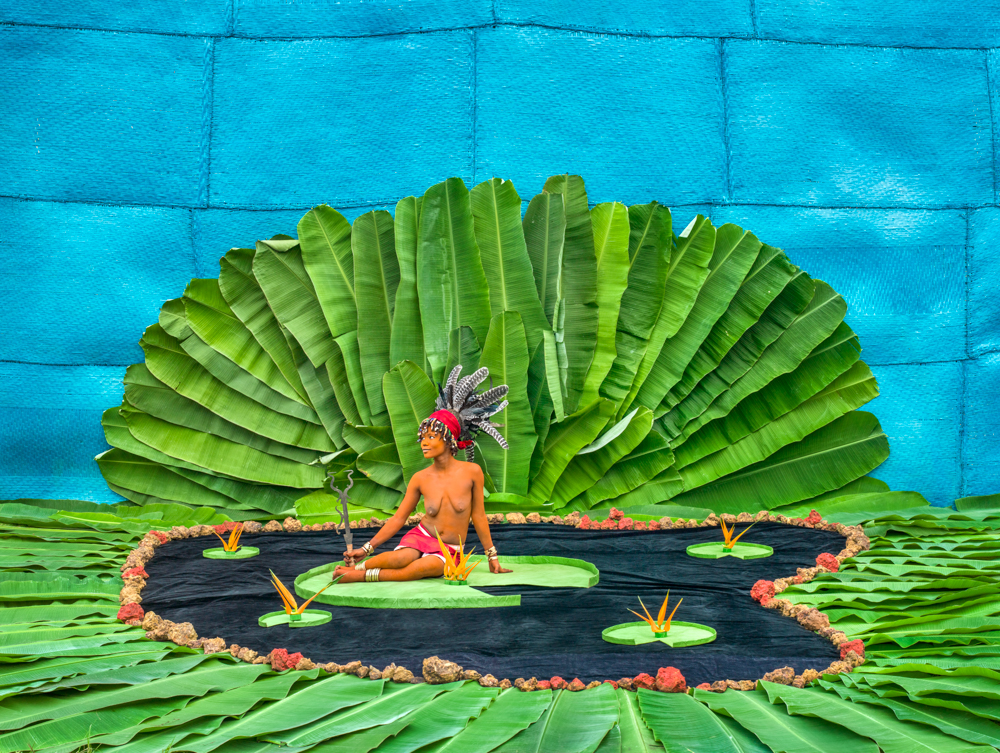 ©Patrick Willocq, Walé Bontongu’s pond « Ensansa : Elìba éné ê ndé ngìná y’ôkonda, enu nsí bápóbôbólé lòkóto, nyama bápówêne itábo». Song : I am like pond in forest, like fish skin that does not peel, like animal not see move like fish in water The Walé ritual is highly competitive as it’s all about having more prestige and power than your rivals to boost family honour. Speaking to other Walés, Bontongu (19 years old, married, 3 years in seclusion, the mother of Falone) sings her superiority: she is mysterious like a pond (usually a hidden place in the forest where spirits lie) and untouchable as this animal or that fish.

Self-taught French photographer, Patrick Willocq has lived and worked 34 years in diverse cities throughout his career, including Kinshasa, Shanghai, Hong Kong and Paris. Patrick first developed a love for the Democratic Republic of Congo while living there as a teenager. In 2012, and following a trip back to the Congo, Patrick decides to devote himself entirely to photography (he was working for multinationals in Asia Pacific for over 20 years). Tired of images that stigmatized the nation, Patrick Willocq’s work pays tribute to the “beauty, simplicity and dignity” of daily life in the D.R.C. His recent projects explore non-western narratives and mise-en-scenes in collaboration with local communities. By documenting indigenous culture and customs through carefully composed performative images, he is able to take his images far from the usual hackneyed and clichéd depiction of D.R.C. and bring a fresh interpretation of Africa.

The series On the road from Bikoro to Bokonda, won the 2012 AFD best photo project Award and exhibited in over ten international festivals including Paris Photo 2012 (Finalist SFR Competition) and Photo Off (Paris) 2013.

With I am Walé Respect Me, produced in 2013, a series about an initiation ritual among Ekonda pygmies where female subjects stage their return to society through a lyrical account of their isolation, Patrick Willocq has been selected to form part of the British Journal of Photography, the Ones to Watch in 2014. He is a finalist for the LensCulture Exposure Awards 2013, a finalist for Leica Oskar Barnack Award 2014 and Renaissance Photography Prize 2014. Winner of La Bourse du Talent Portrait 2014 and POPCAP 14, he has also been nominated to the prestigious Arles Discovery Award 2014 and the Deutsche Börsce Photography Prize 2014.

Forever Walé (I am Walé Respect Me, part II) continues to be the result of a unique collaboration with young pygmy women, their respective clans, and an ethnomusicologist. Working with many artisans of the forest, Patrick continues to build his staged photographies in the middle of the bush, without any photomontage nor collage. “Coup de Coeur” Prize HSBC 2016.

Walé, 2ème regard is his latest work produced in 2015. Finalist of the Sony World Photo Awards 2016, winner of the GUP magazine 10th year anniversary competition. 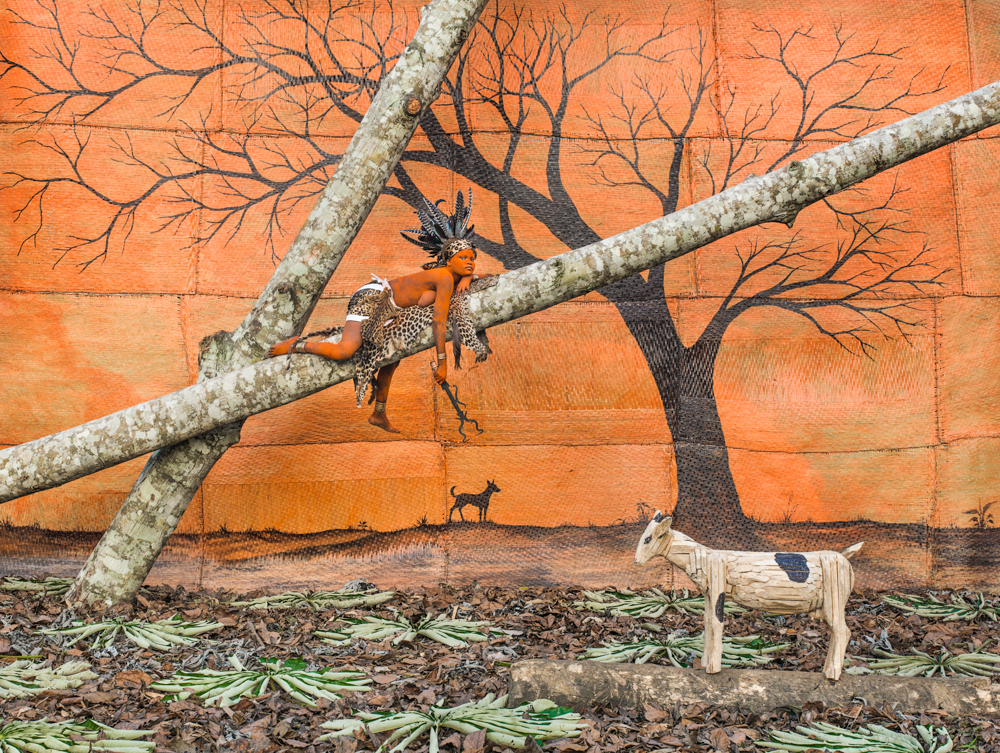 ©Patrick Willocq, Bosala, leopard Walé « Ensansa : Walé lângóyàlé nkòi ng’áòpósa lûmòlá ngwá la ntábà. Bàsómi bâkìnú lobétámá ndé bìtánda. Walé là ngóyàlé nkòi ndé bìtánda lûmólá ngwá ». Song : Walé became like a leopard when she hunts you hide dogs and goats. My assistants lie on branches. Walé it looks like she became a leopard on a branch, remove dogs. By comparing herself to a leopard, Walé Bosala (17 years old, married, one year in seclusion, mother of Pauline) expresses her singularity and displays her superiority. She also warns other Walés: she has the willpower to defend against them if necessary (the Walé ritual is highly competitive as it’s all about having more prestige and power than your rivals to boost family honor).

The overall quality of the submissions to Center’s Awards this year made it extremely challenging to choose only three bodies of work for the new Exhibitions Choice Awards. Each of the following projects could easily capture a viewer’s attention and spark their imagination when shown in galleries or on museum walls.

Patrick Willocq’s Forever Walé is an incredibly imaginative exploration of initiation rituals among pygmies in DR Congo, where female subjects stage their return to society through a lyrical account of their isolation. 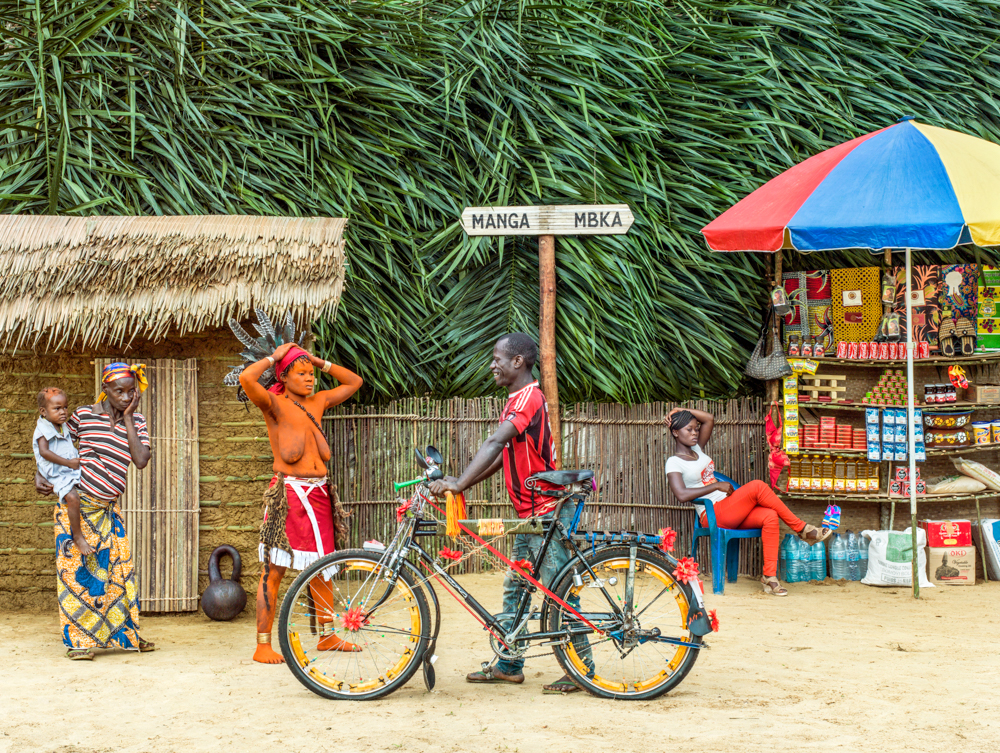 Forever Walé (I am Walé Respect Me, part II)

I dove deeply here into an initiation ritual and aimed to create an artistic and documentary photography, very close to the daily experience of Ekonda pygmies in the Democratic Republic of Congo.

The Ekondas believe that the most important moment in the life of a woman is the birth of her first child. The young mother, is called Walé (‘primiparous nursing mother’). She returns to her parents where she remains secluded for a period of 2 to 5 years. By strictly respecting several taboos during this whole period, including a taboo on sex, she is given a status similar to that of a patriarch. The end of her seclusion is marked by a dancing and singing ritual. The choreography and the songs have a very codified structure but are unique creations specific to each Walé. 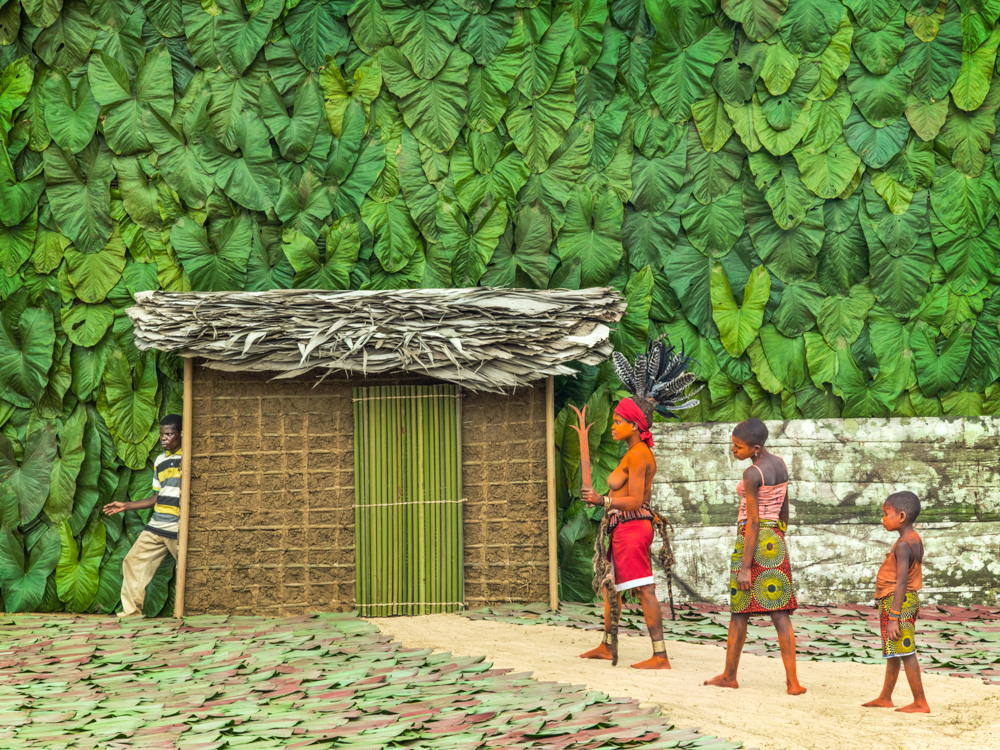 ©Patrick Willocq, The uncle of Walé Ikita flees home « Ensansa : Walé áôkùma bàkáká l’ékolo. Ayôlí nd’ótónga b’ôlàká éyalí nókó. Nókó áôyàbéle lòbángo nd’épòka». Song : Walé starts moving. She went to visit her uncle who lives Bolaka. The uncle went to hide in the forest. In the patrilineal system of Ekondas, the child belongs to the father, which means that when a Walé is in seclusion, the paternal uncle is also responsible to provide for her. Walé Ikita (19 years old, married, three years in seclusion, the mother of Marie) criticizes her uncle who failed to take his responsibilities by hiding in the forest when she visited him.

I have always been fascinated by native tribes because I feel they have a wealth that we have somehow lost. To document this beautiful tribute to motherhood, fertility and femininity, I proposed to some Walés, whom I’ve known for over a year, to participate in staged photographs that bear witness to a part of their personal history. Each set-up worked as a visual representation of one of the subjects that the Walé would sing about on the day of her release from seclusion.

After I am Walé Respect Me, Forever Walé continues to be a personal reflection of women and the Walé ritual, but first and foremost the result of a unique collaboration with young pygmy women, their respective clans and an ethnomusicologist. Working with many artisans of the forest, I build my staged photographies in the middle of the bush, without any photomontage nor collage. 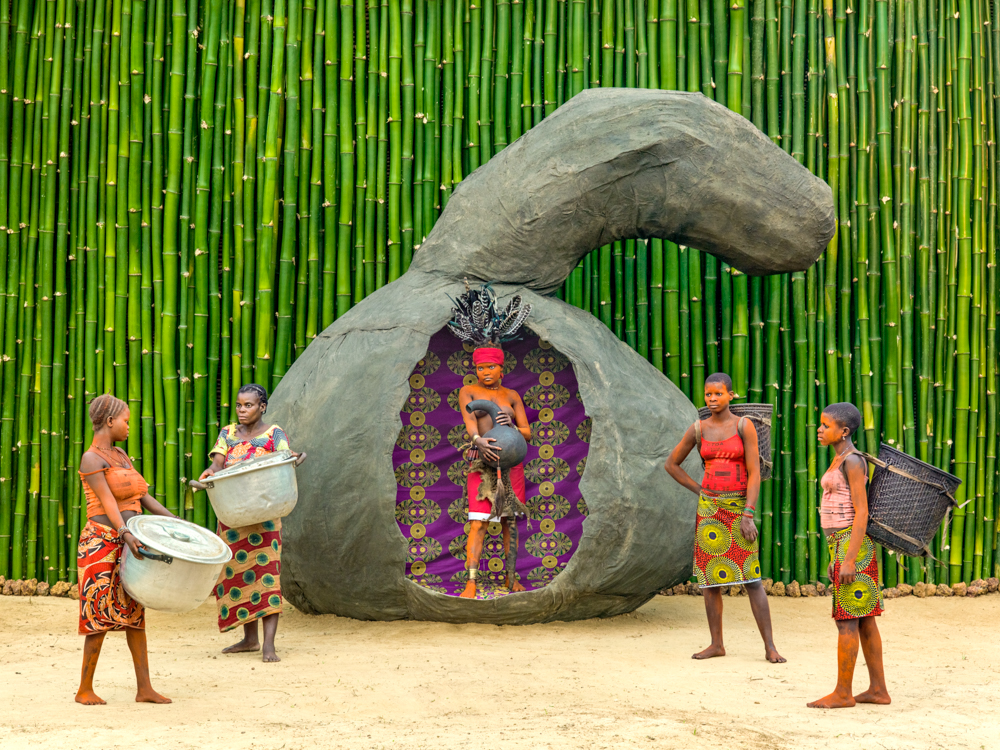 ©Patrick Willocq, Walé Ikita, confident and shameless « Ensansa : Bané báyôkèndé la nsandi. Bané báyôkèndé la ngòló nd’âkàta. Walé émí ániélé mp’ólàngi b’ónéne mí bômèlé mí bàsànga ». Song: Some of them walk with baskets, others walk with lids in hands. Me Walé, I only walk with calabash I drink wine. Walé Ikita (19 years old, married, three years in seclusion, the mother of Marie) sings that she will not be ashamed (as someone who has been drinking wine) to dance and sing in front of the public on her seclusion ending festival. Very confident, she does not need to drink wine to perform. By self-praising her attitude, she discredits other Walés which, she assumes, broke the drinking taboo. 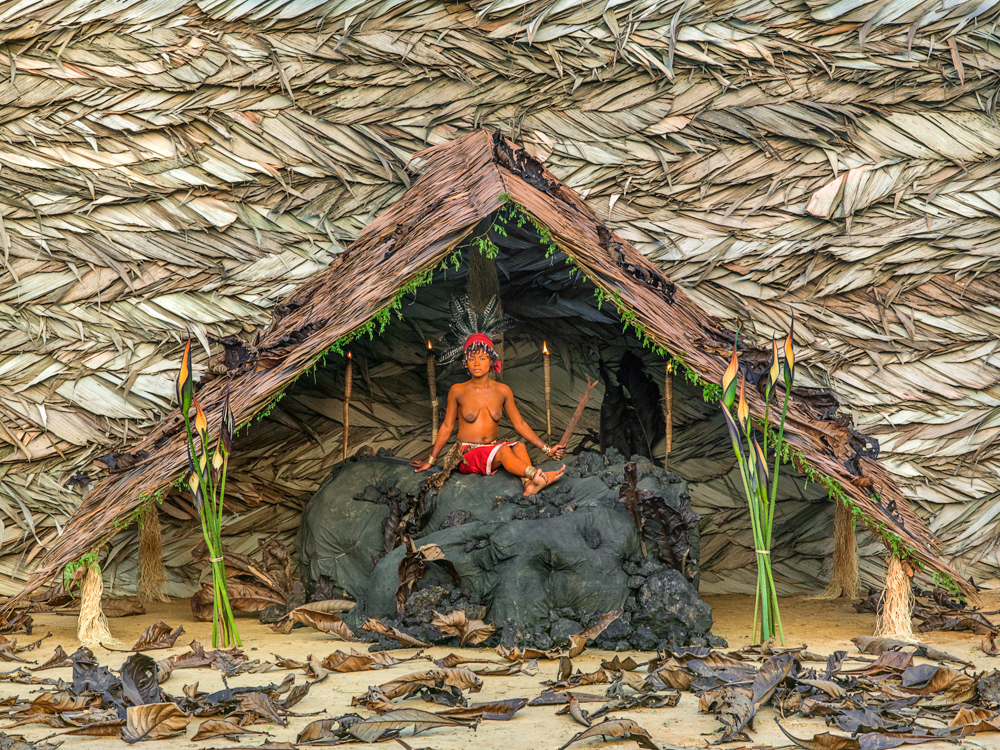 ©Patrick Willocq, Walé Bontongu, a darling stone « Ensansa : íbòko y’íkèlí mpólùwú émí lòbèye lóndêlèle ». Song : Stone ikeli I do not uproot myself me darling that one stir. Walé Bontongu (19 years old, married, three years in seclusion, the mother of Falone) compares herself to a big black stone that is found in the forest: time passes by and the stone remains there, of little use. Bontongu expresses her loneliness and boredom (a Walé spends most of her time in seclusion in her mother’s hut) despite the love and respect that she earns by respecting various taboos and the fact that she is seen as a patriarch. 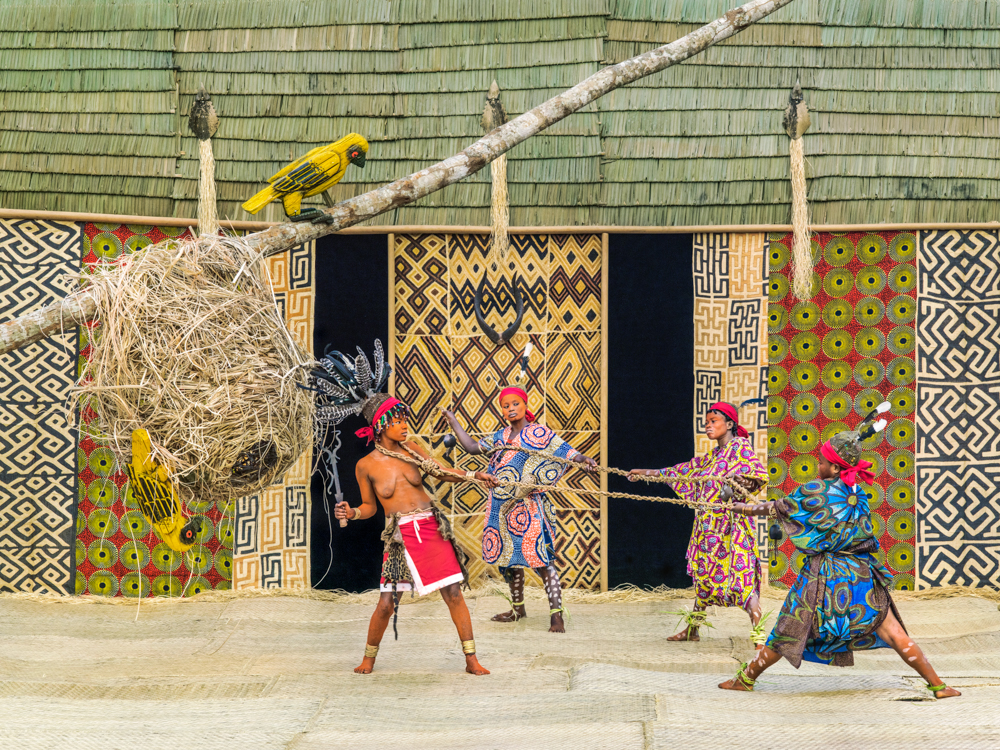 ©Patrick Willocq, Walé Bontongu, hung by weavers « Ensansa : Bokóma ndé nkíngó, njôwela bíalè bêbàngákí lòlèke. Song: Hanging on my neck, I suffer Walés who began weaver. At the beginning of the Walé ritual, Ekondas did not have a seclusion ending festival. At some point they introduced the Bobongo songs and Iyaya dances in order to end the ritual with great pomp. Walé Bontongu (19 years old, married, three years in seclusion, the mother of Falone) is forced (hanging) today to dance and sing (as weavers do) because of Walés who once accepted to do so. 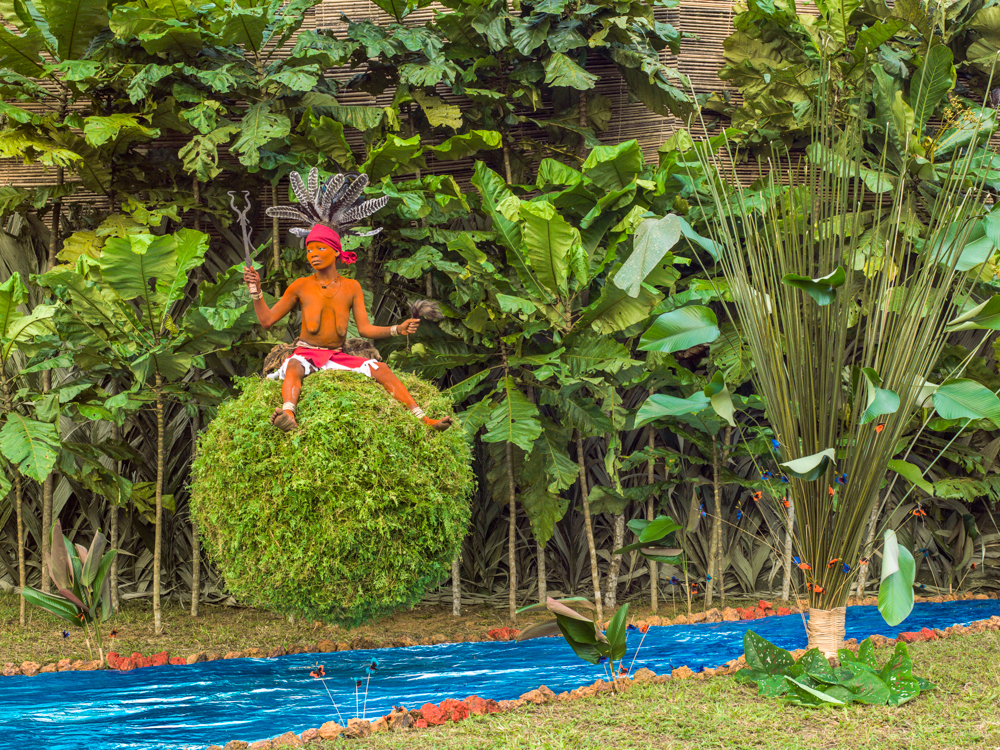 ©Patrick Willocq, Walé Bakuku hops across the creek « Ensansa : Mpètélé walé nd’âyóló békèli, bòtópe bò ninga, bókôné lòlòko njôtòndìma, walé bonkonji nyâmbòlà nk’aíko nd’âyóló békèli ». Song : I Walé secluded by sources of creeks, rubber ball that today I make hops. I Walé patriarch, I answer only here in creeks’ sources. Walé Bakuku (20 years old, married, four years in seclusion, Benjamin’s mother) lives near the source of a creek. To show her superiority she speaks of several streams and compares her dancing, which she deems unique, to balloons hops (the Walé ritual is highly competitive as it’s all about having more prestige and power than your rivals to boost family honour). 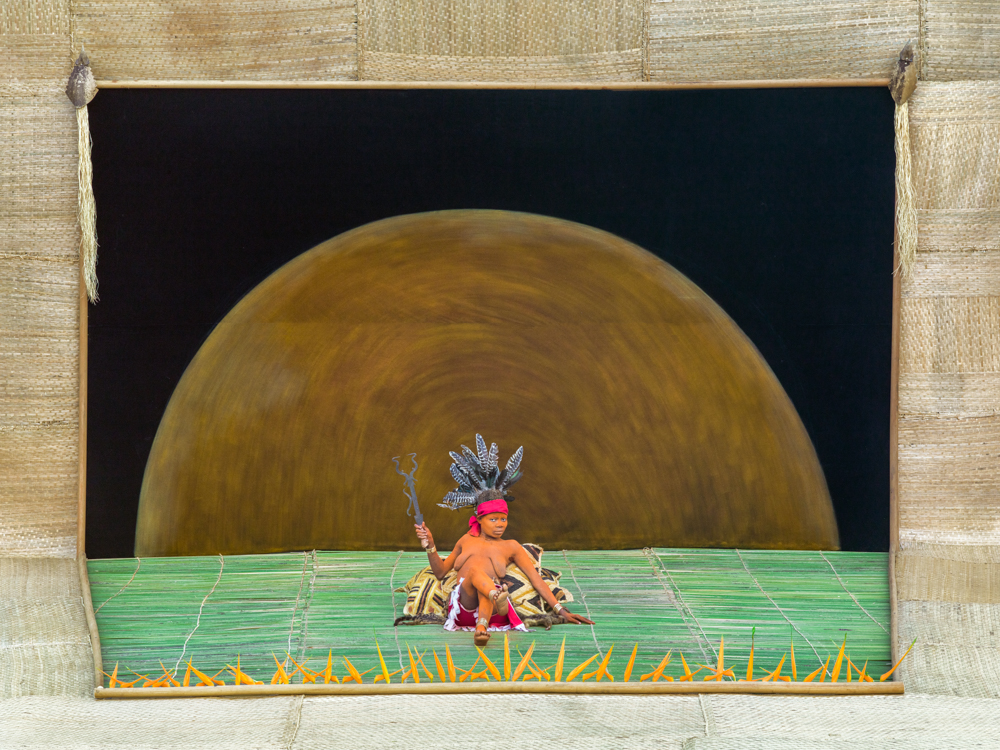 ©Patrick Willocq, Walé Bakuku, chimpanzee at sun set « Ensansa : Mâ walé bònkònji wâné bó bìlía, bàkàlé bôntâna bóbétsí mí bàsànja ». Song : Mom Walé patriarch, I am like the sun chimpanzee, rivals find me lying on back. Once, at sunset, the young village children would stretch like chimpanzees in order to grow taller. By comparison, Walé Bakuku (20 years old, married, four years in seclusion, Benjamin’s mother) expresses her superiority because as she grows taller, her rivals remain short (the Walé ritual is highly competitive as it’s all about having more prestige and power than your rivals to boost family honour). 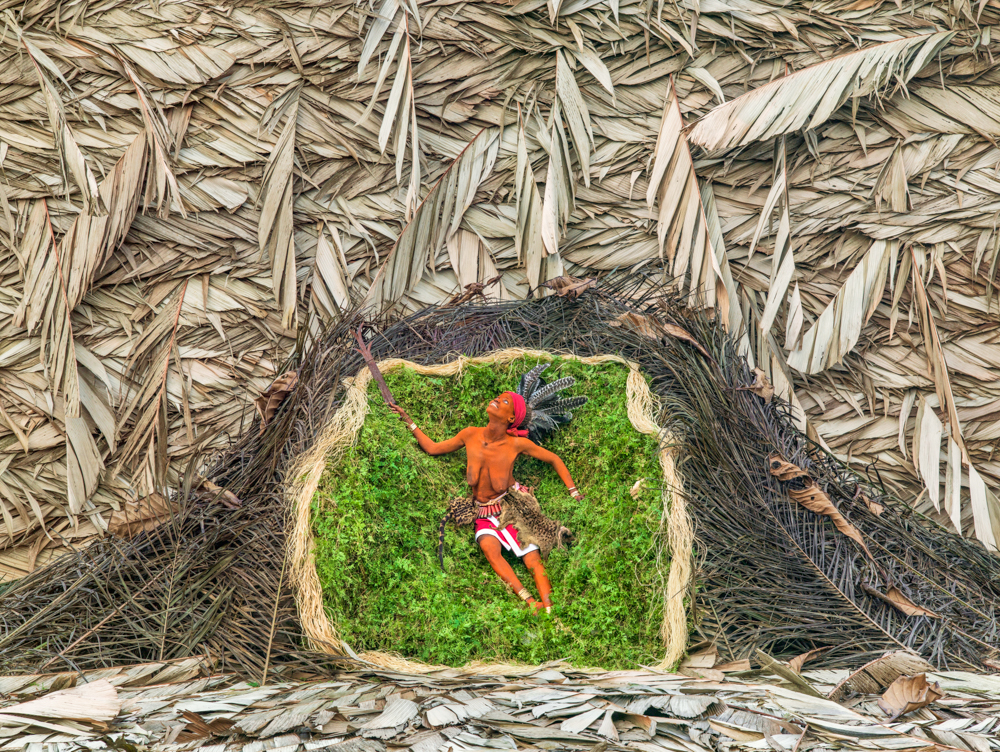 ©Patrick Willocq, Walé Besawu’s bed « Ensansa : Lòtsíka mbétàme nd’âbúnja, ntsípétòlo bòmpêmpe. » Song : Let I sleep on leaves, I no fear wind. It is a criticism that Walé Besawu (20 years old, without a husband, three years in seclusion, mother of José Ikongo) makes of her father: he never repaired her seclusion hut, poorly insulated, or made her a suitable bed. So she spent her nights facing the wind, lying on a bed made of leaves. 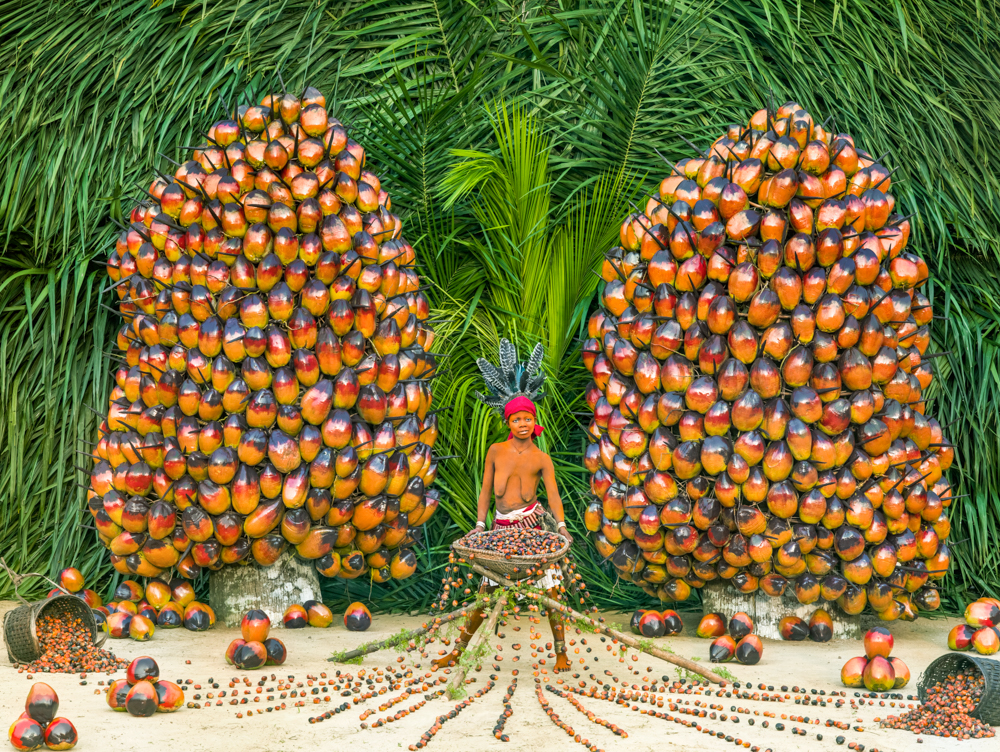 ©Patrick Willocq, Walé Bakuku, generous like palm nuts « Ensansa : Walé njômùkòlé mpòfu nd’íbá, njôlíkèlí boloi ». Song : Walé me I extract palm nuts, I distribute to crowd. The Walé ritual is highly competitive as it’s all about having more prestige and power than your rivals to boost family honour. By handing out palm nuts (a symbol of generosity among Ekondas) Walé Bakuku (20 years old, married, four years in seclusion, Benjamin’s mother) sings her superiority. 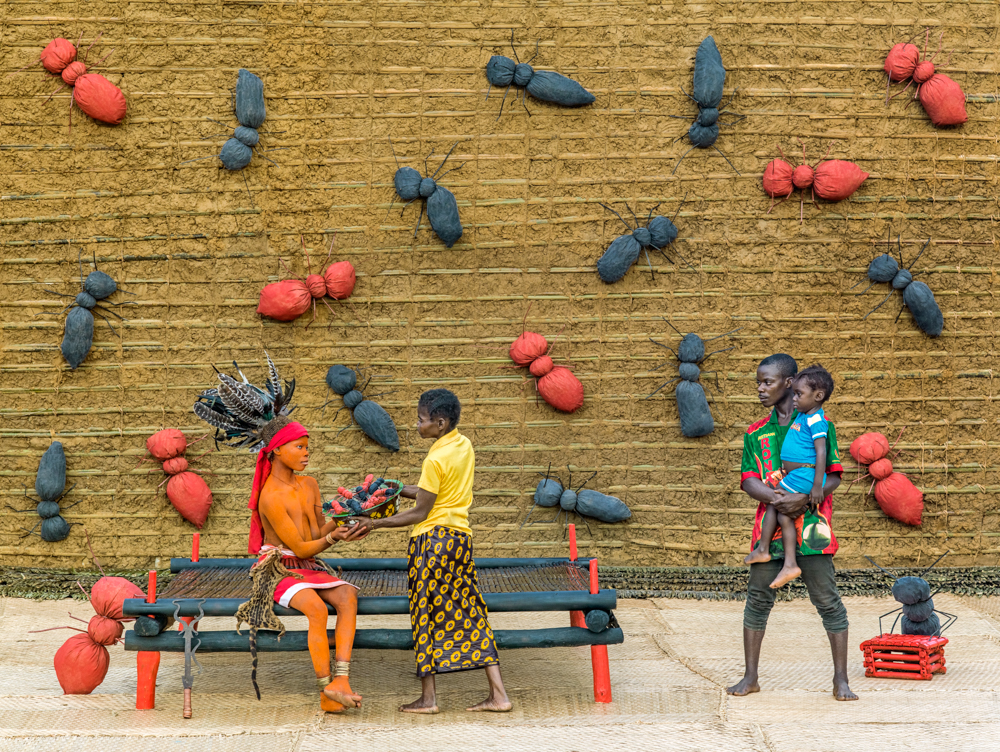 ©Patrick Willocq, Walé Bakuku, ants dish « Ensansa : Eka mà âmbá la papa Eyenga bàngô ntùkubèla bintòkèlèke boyanga ngéní nd’âbála la baboke la bafumba ». Song: With mom Amba and dad Eyenga they prepare me food, deception there in wedding with packages and ants. Walé Bakuku (20 years old, married, four years in seclusion, Benjamin’s mother) openly criticizes her in-laws. While her parents serve good food, her in-laws offer her food with ants. She expresses the idea that it’s a bad marriage because neither her husband nor her in-laws helped her much while in seclusion. 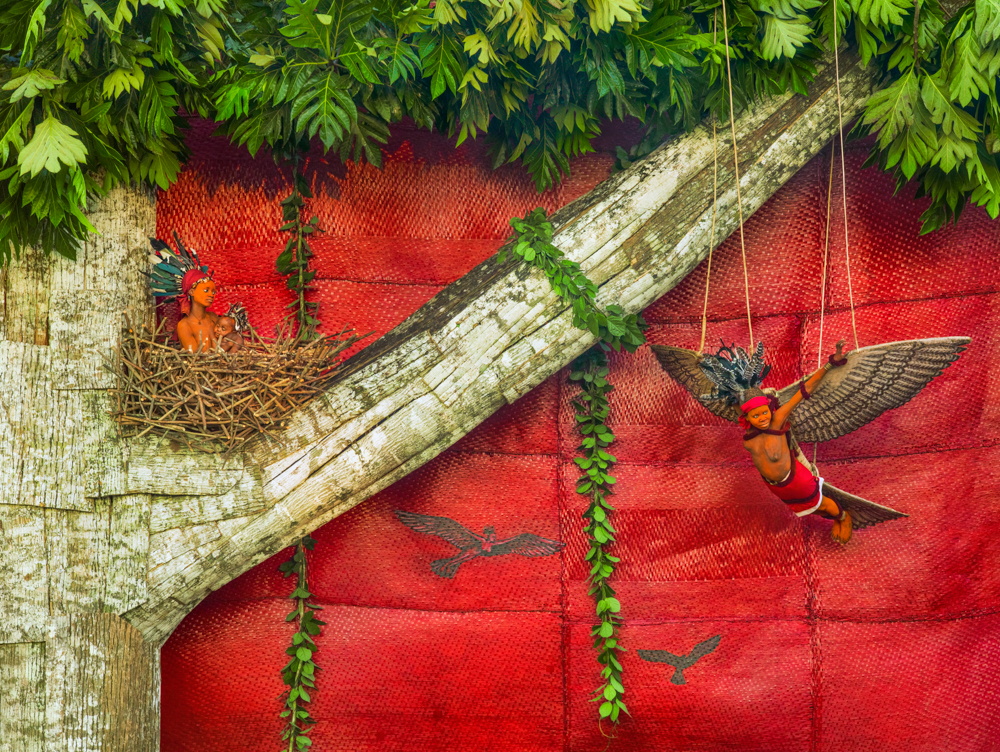 ©Patrick Willocq, Ntembe, sparrowhawk Walé « Ensansa : Njalé nkombé éné yélúá nd’ókili, ntsíbátá íbáko nd’ólògo biàlé». Song : I became sparrowhawk wandering the world. I did not find sitting at court, you understand Walés. Walé Ntembe (18 years old, without a husband, two years in seclusion, the mother of Beane), self-praises her attitude and discredits other Walés that spend too much time walking about in the village (which is dishonourable) while she remains in her hut to care for her child (the Walé ritual is highly competitive as it’s all about having more prestige and power than your rivals to boost family honour). 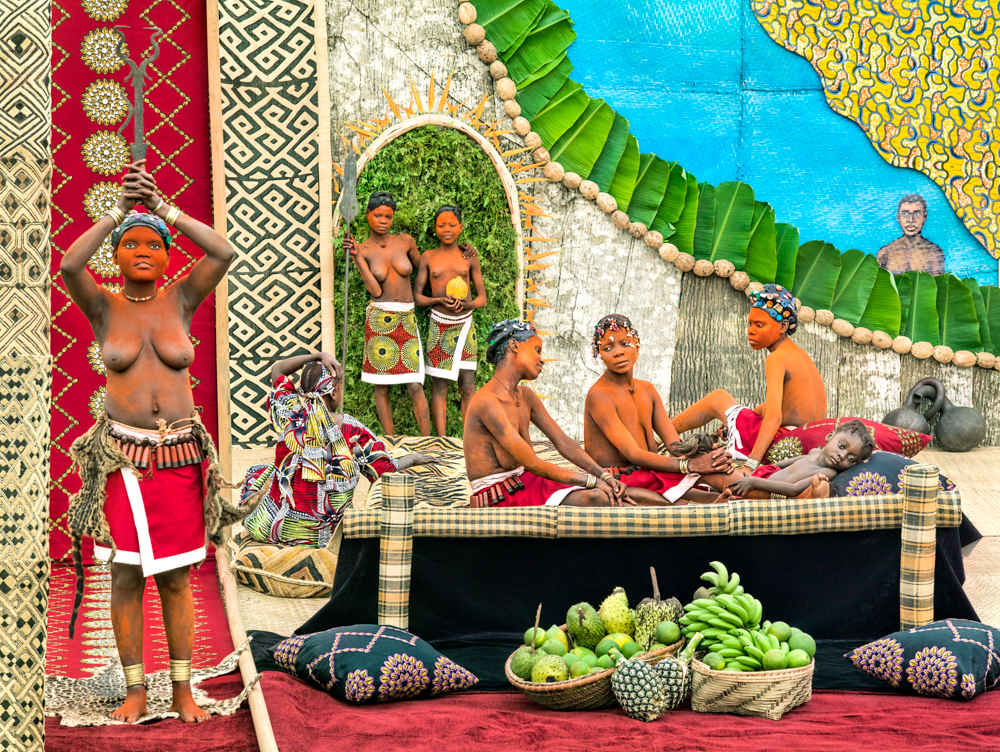 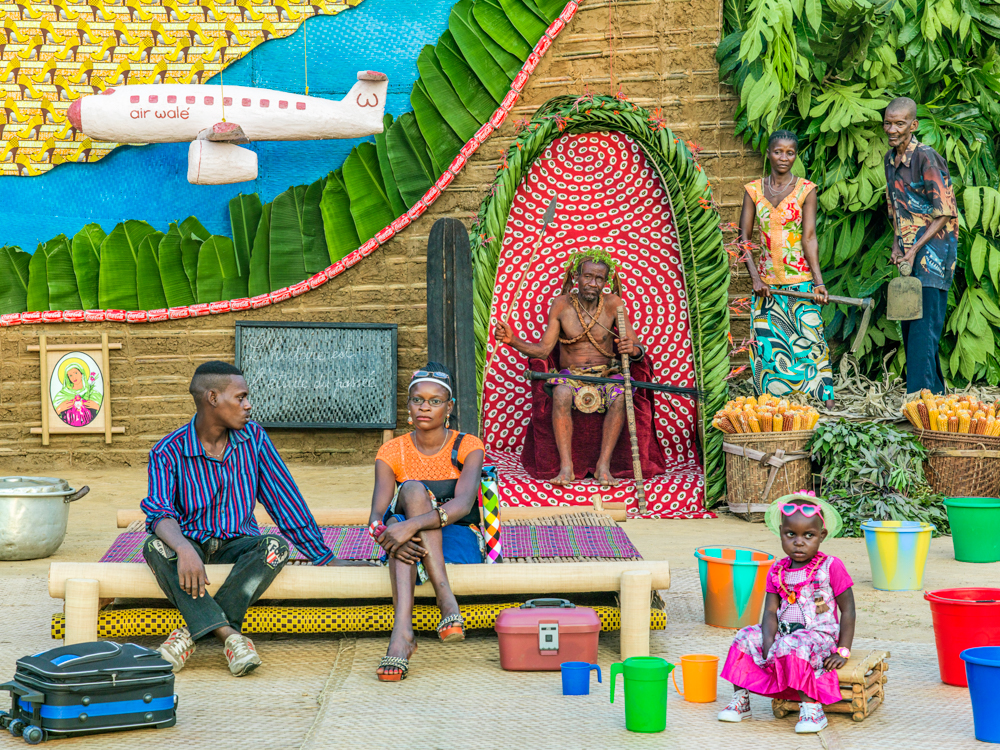