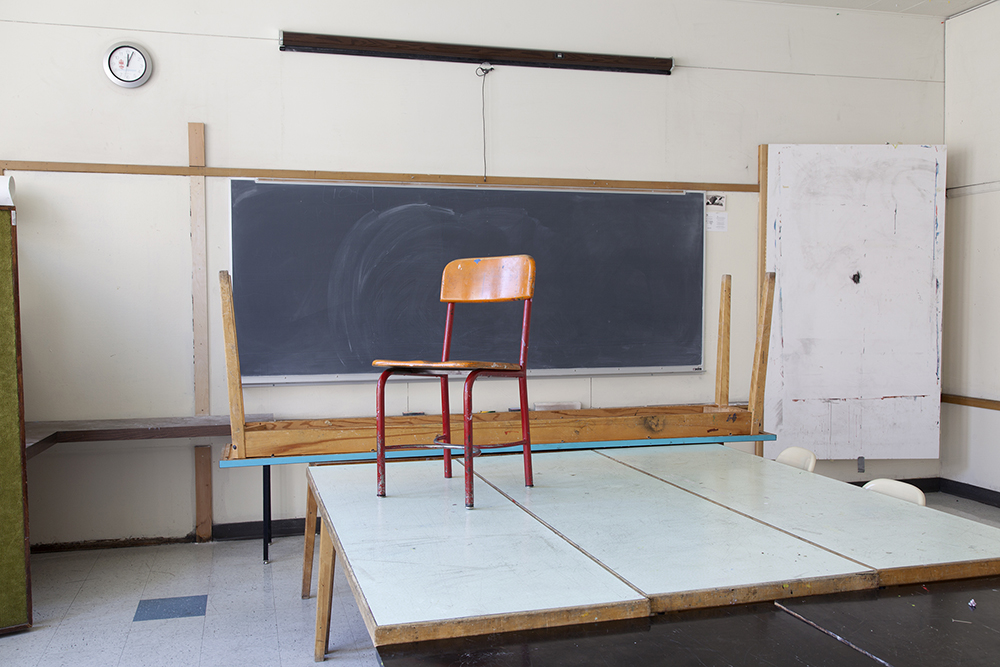 This week, photographic artist, Jacinda Russell shares the work of photographers creating work in Indiana, as she takes over as the Indiana States Project Editor. Today we share her newest project, Art Department and ask her about making work in the mid-west. I first discovered Jacinda’s work through my friend Diane Meyer and was fascinated with her conceptual projects that spoke to obsession, behavior, and collecting–and the idea that anything can be fashioned into “art.”

Jacinda transforms objects into self-portraits, representations of place and symbols of fixation. She works primarily in the mediums of photography, sculpture, installation, and bookmaking. Her artwork has been exhibited at Texas Gallery, DiverseWorks, Atlanta Contemporary Art Center, Houston Center for Photography, and the Academy of Fine Art & Design in Wroclaw, Poland. She is represented in the collections of the Center for Creative Photography and the Museum of Fine Arts, Houston. Her writing is published in the book Learning to Love You More and the periodicals SPOT, Afterimage, Orlo and Art Lies. Born in Idaho, she received her BFA from Boise State University in Studio Art and her MFA from the University of Arizona. Currently, she is an Associate Professor of Art at Ball State University in Muncie, Indiana. 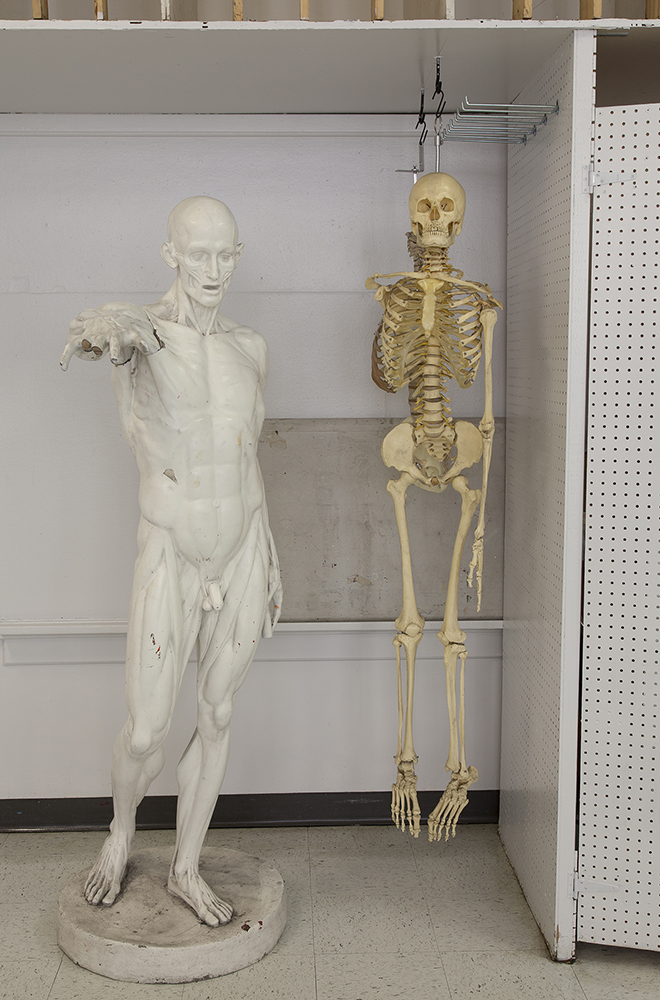 I was born into an Art Department and have spent all but two years of my life there. My father was a painting and drawing professor at Boise State University where, as a child, I watched him grade, helped him rearrange drawing chairs to face the modeling stand, and stared out the windows while he completed administrative tasks. Later, I would attend the same school, switch my major from creative writing to studio art, and enroll in the courses of the professors who had known me since birth. I moved to Tucson for a graduate degree and after seven years as an adjunct instructor, obtained a full time university job teaching photography. 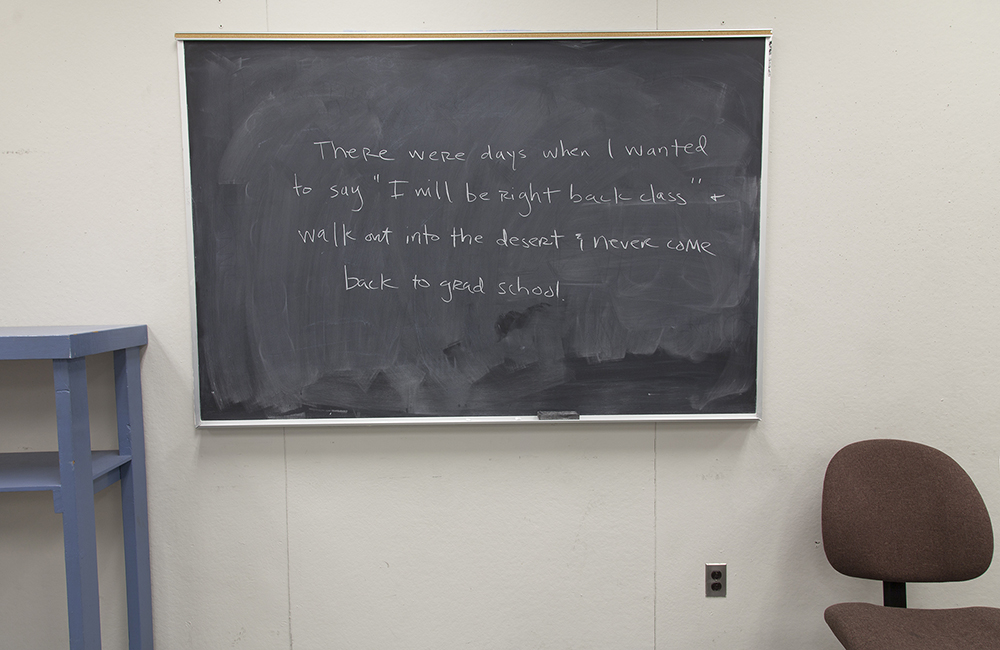 It was not long before I noticed history repeating itself in the stories my father told and those that I witnessed first hand. In 2013, I began documenting six decades in an Art Department from the perspectives of the student and the professor. The series is divided into several categories including: an installation of photographs and objects entitled An Anonymous Inventory of Items Stolen from Art Departments, a visual response to a letter outlining nine outlandish behaviors witnessed while working in this field (and their accompanying typed text), conversations written on the blackboards or walls in the rooms where those activities took place, and straightforward photographs of the pedagogical environment. 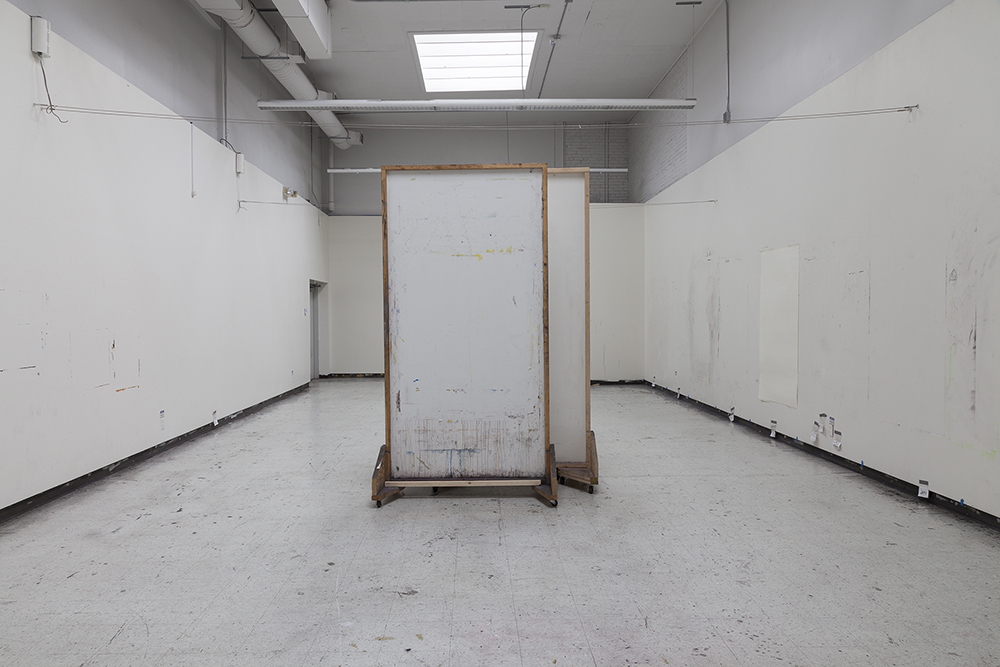 Tell us about making photographic art in Indiana. How does the state, terrain, and community affect your work?

I came to Indiana from the Pacific Northwest for the job. Prior to moving in 2007, I never spent much time photographing anything outdoors – all my artwork revolved around the studio or dark corners in an old YMCA building in Astoria, Oregon. The move to the Midwest has greatly affected my artwork, as I no longer take my surroundings for granted (to this day, I still spend time longing for the mountains behind cumulus clouds on the flat horizon). It is because of Indiana that I am constantly searching for a place to call home. I never made work about that until moving here. 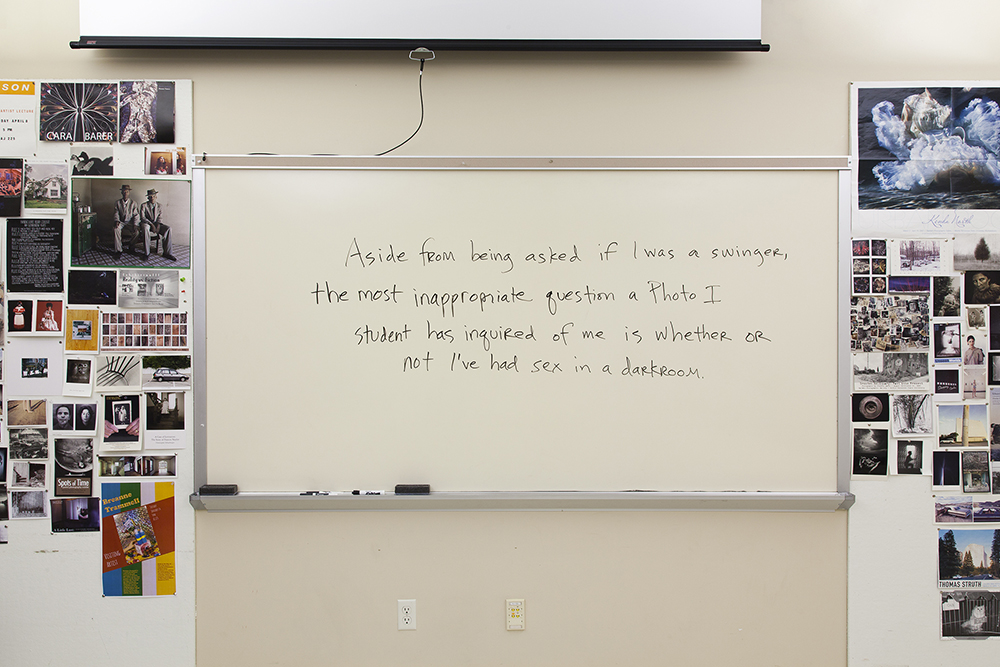 Is there a photo community in Indiana?

There are small pockets in cities like Indianapolis but it is very hard for me to pinpoint specific communities unless it revolves around the university system. People tend to leave this state once graduating or work commercially. 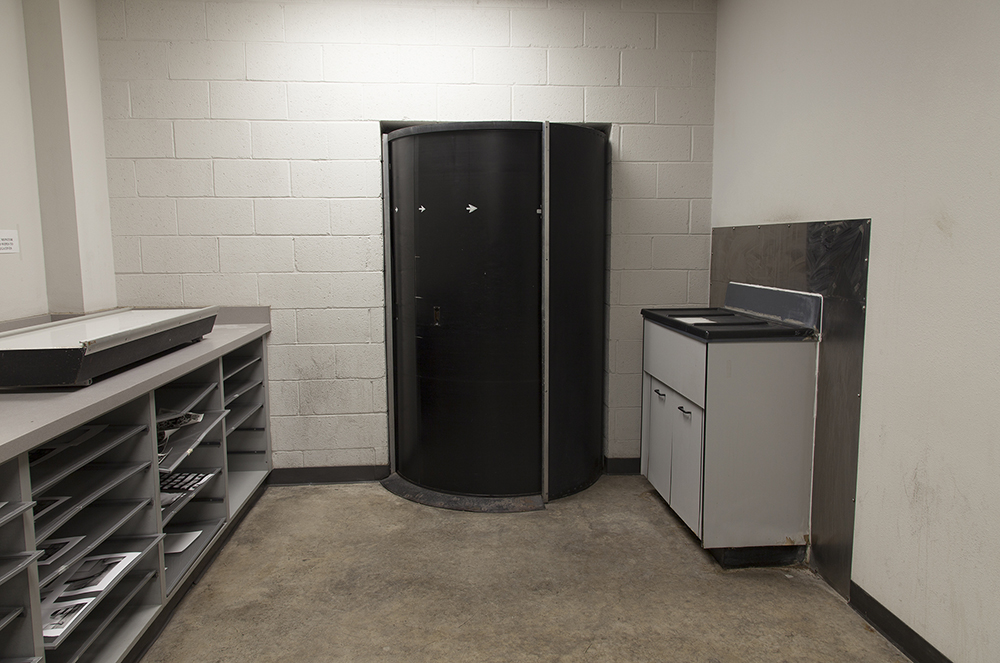 How did you select the photographers featured this week?

I had to include two of the first photographers I met once moving to Indiana because of my admiration of their work: Mark Sawrie and Amelia Morris. Stefan Petranek is an acquaintance that a reviewer at Photolucida recommended I investigate and it was a great pleasure to use this as an opportunity to get to know him and his artwork. Shelley Given and Mia Beach were unknown to me prior to this year and were recommended by fellow artists working in other fields. 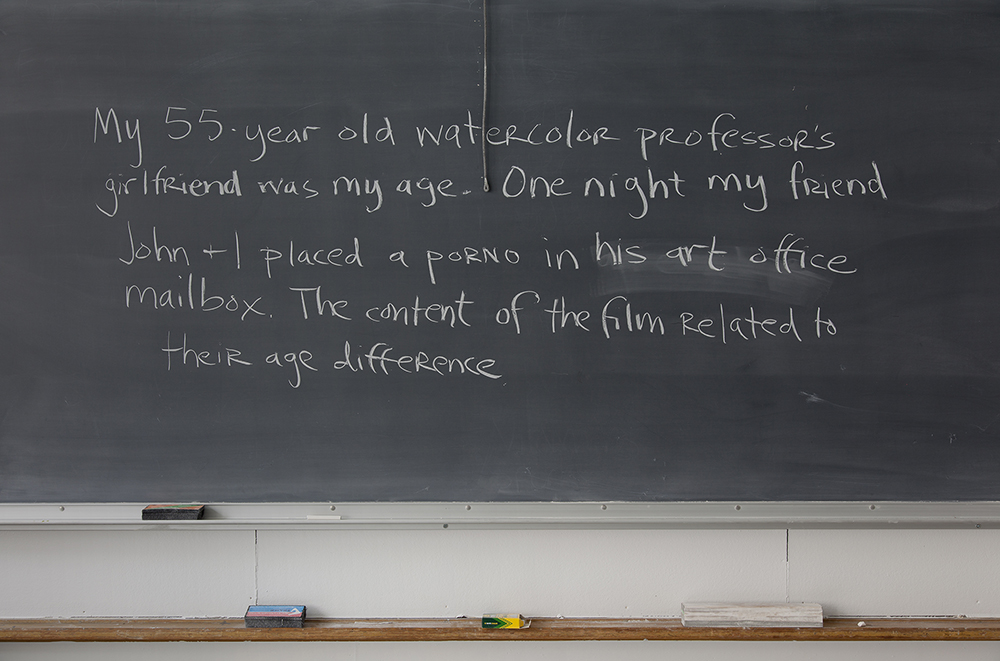 We are featuring your series, Art Department, today. Looking at your photographs, I am transported to my own experience in an art department, where there is potential in everything. Do the rooms represent place or represent possibility?

More than anything, the rooms represent stories of a past no longer present in that very location. They are reminders of a history that spans decades. I am reinterpreting a letter my father wrote me on the nine most outrageous events that happened to him while teaching in an art department. In addition, I am telling him my stories by revisiting the schoolrooms and studios where they occurred and am writing them on chalkboards. It is a conversation between the two of us but pertinent to anyone’s experience of this place. 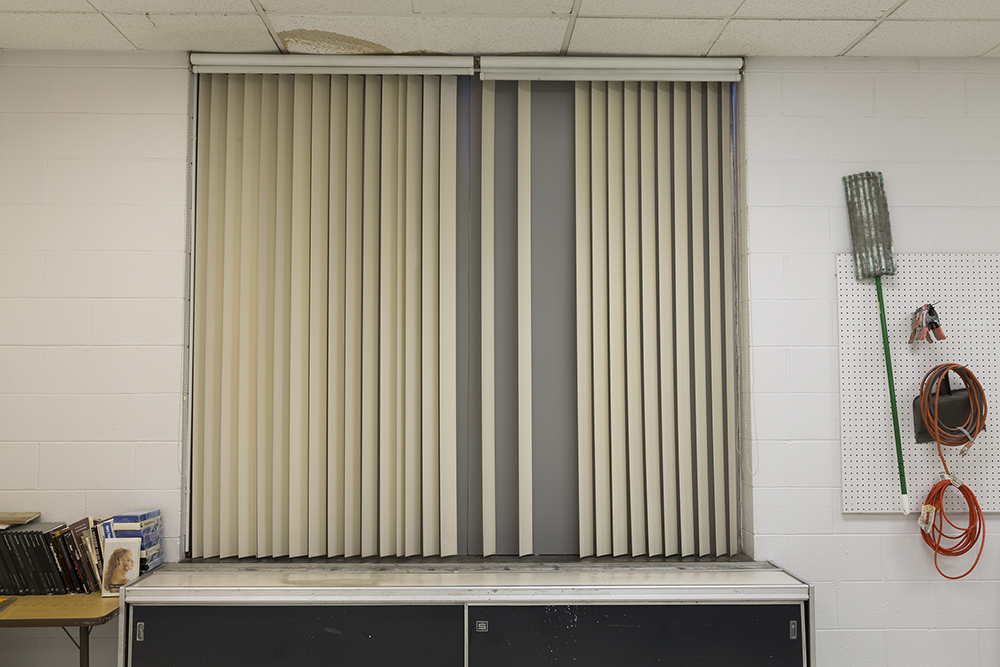 ©Jacinda Russell, Room 251 Where Brent Pointed to the Light Streaming in and Taught Me How to See Color

So much of your work deals with time, history, and documentation, which certainly is evident in this body of work. Can you speak to those sensibilities?

I am a storyteller and have the great fortune of many experiences worth making art about happen to me. I use time and personal history to respond to them – not necessarily in a documentary fashion but one that justifies their present existence. 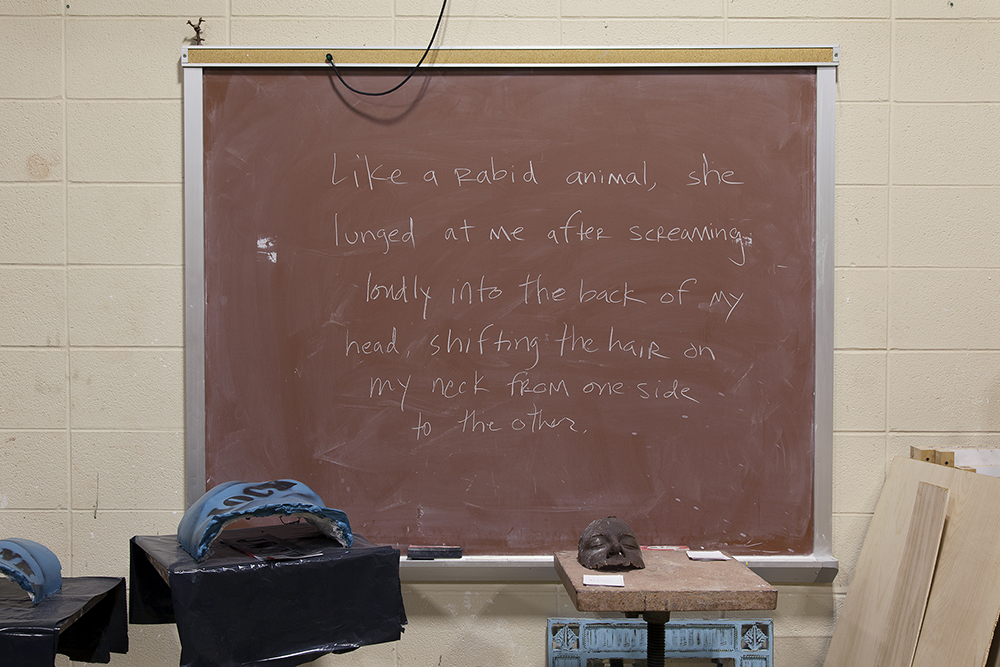 Did your growing up in an Art Department make you an artist?

I rebelled against becoming an artist for years. When I first enrolled in college I was a creative writing major. It wasn’t until I was a junior that I realized I had more art courses than writing and I made the switch. Writing is still very important and I often incorporate it with my artwork. 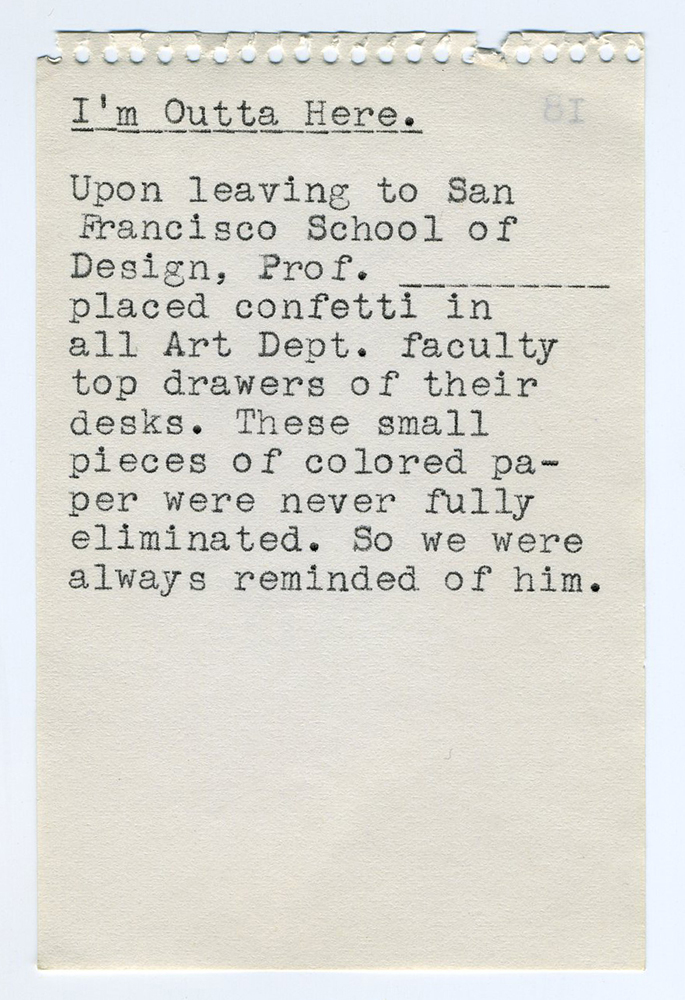 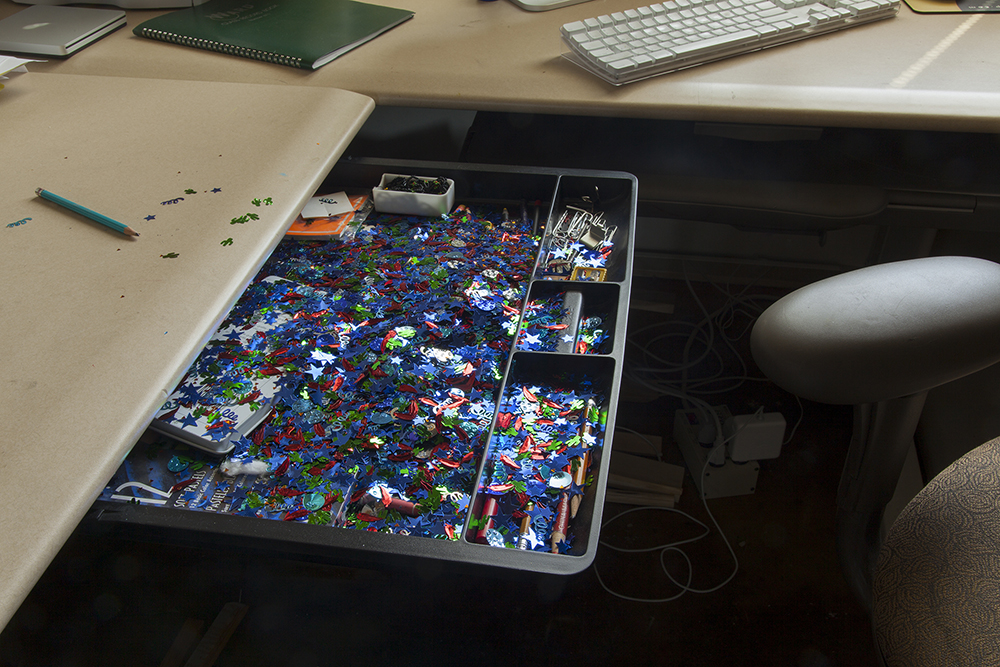 I love that so much of your work reflects that you see art in the ordinary, from keeping every nail clipping or all your hair from hair-cuts over the years. There is something so poignant, yet humorous about documenting the every day—was that something you started in childhood?

My art stems primarily from family and the behaviors I saw as a child revolving around the collections of valuable objects (I grew up in a house with over 200 balloon tired bicycles suspended from the ceiling, multitudes of porcelain signs, old bottles, dolls and toys). An event that had a tremendous affect on me was the death of my schizophrenic great-aunt who hoarded meaningless objects like paper bags, Kleenex and cigarette foil. My sensibility is a combination of both – I turn the most insignificant objects into something monumental and ultimately more valuable. I often joke that if someone breaks into my house, they would be appalled at what I collect to photograph (shredded photographs, lunch bags, years of lists, and swimsuits that have turned crunchy in their old age). I started to collect the fingernails when I first moved to Houston, Texas because I noticed I was cutting them more frequently than ever before. Thus began the conscious decision to collect something from each location where I lived. Indiana is represented by every haircut. Ah ha! This is another way this state has affected my artwork as I would not have collected that in any other location – it always comes full circle. 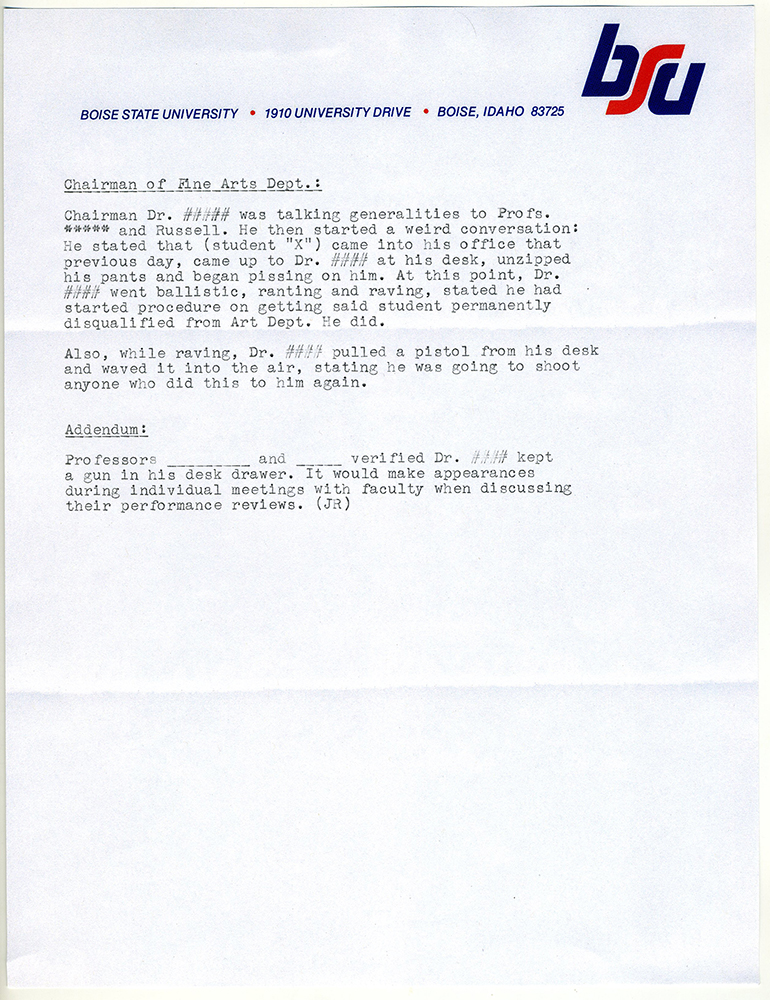 Immediately, there is a very special box that was shipped to my office last week that contains the most unusual object that anyone has admitted to stealing from an Art Department that I must photograph and return. It contains a human skull used for studying anatomy in the 1970s. In the not so distant future, I have ambitions of creating sound art and am working toward that. 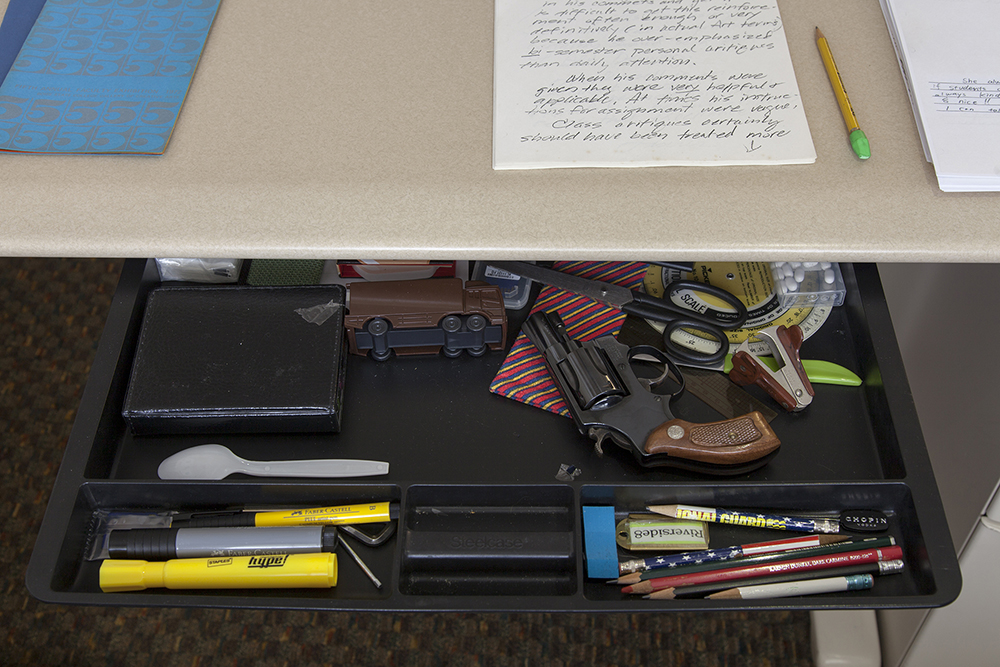 It would involve swimming laps outdoors in the morning followed by a day of reading and making art. Green corn tamales and an Oaxacan dry sour with mescal for dinner and conversations about art with old friends. My cats would be milling about vying for attention. It is summertime and there are no mosquitos. I better get on that! 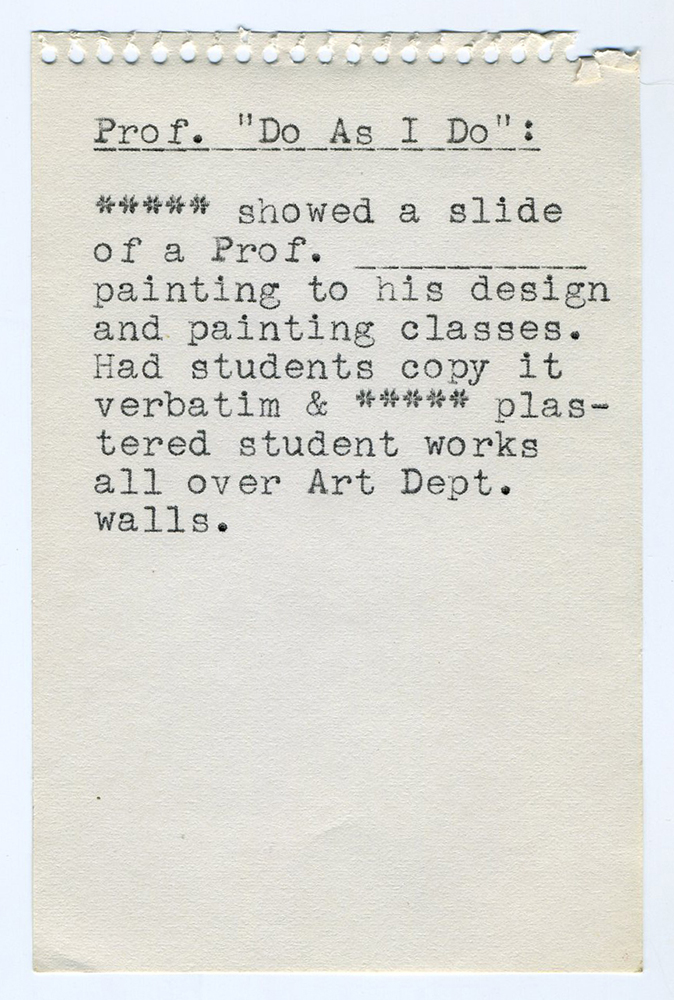 ©Jacinda Russell, Professor Do As I Do Text 2015 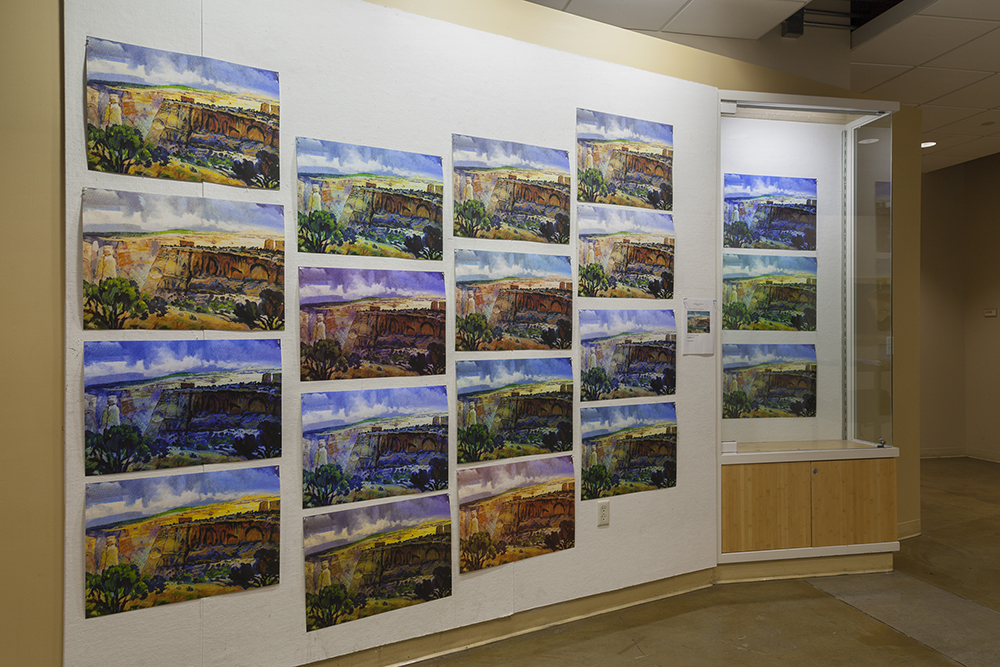