Allison Stewart: Bug Out Bag: The Commodification of American Fear by Aline SmithsonApril 4, 2018 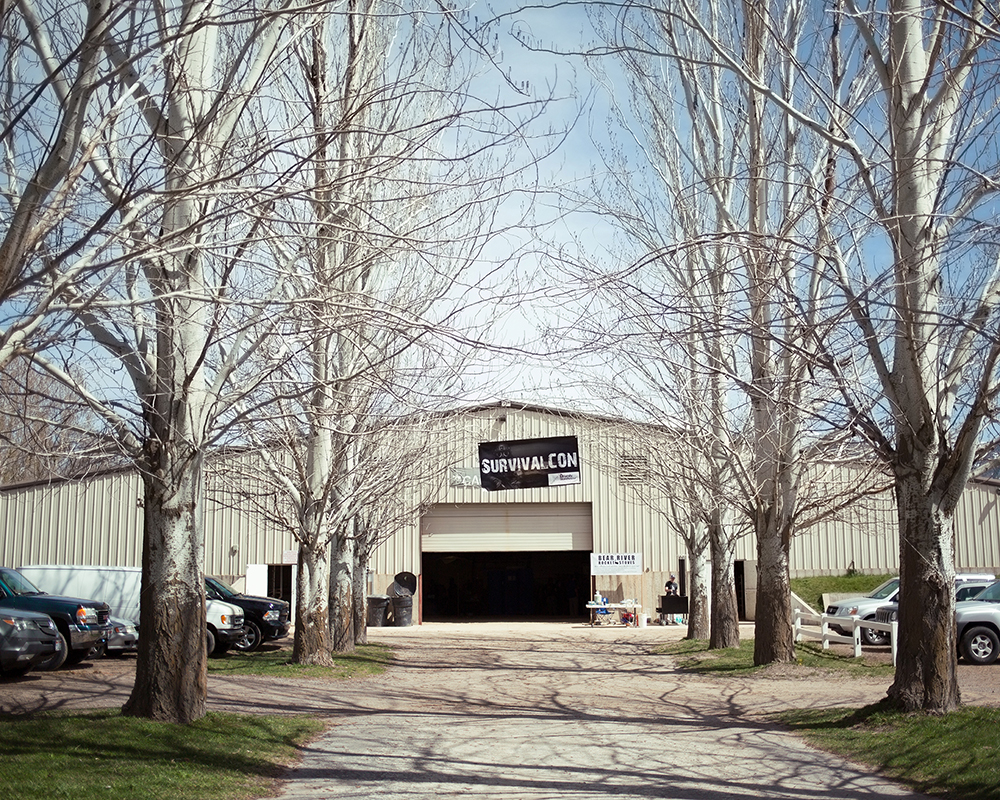 ©Allison Stewart, Survivalcon! A preparedness expo showing off food storage, first aid, solar solutions, camping and survival supplies, homesteading, alternative energies, preparation and survival education, and most importantly of all opportunities for networking with others of the same mindset.

Allison Stewart first shared her project, Bug Out Bag: The Commodification of American Fear, with me at Photolucida last year and I recently had a chance to see it again during at a SXSE Workshop in Georgia. The project is an incredible portrait of our reaction to uncertain times, whether stemming from gun violence or mother nature. How do we prepare for our fears–what do we need to survive? A gun? Food? Marijuana? Allison has a terrific new book, under the same title, that will be featured at the upcoming Month of Photography Los Angeles Photo Book Exhibition, on Sunday, April 8th from 4- 7pm, along with the Paris Photo–Aperture Foundation Photo Book Awards. Both events take place at Venice Arts, and will run through April 27, 2018. Allison will also have work in the Portraits at A Smith Gallery in Johnson City, Texas, jurored by Alyssa Coppelman and the Los Angeles Municipal Art Gallery Juried Exhibition 2018, July 28 – September 16, 2018.  Jurors:  Jonathan Griffin, art critic; Jamillah James, Curator, Institute of Contemporary Art, Los Angeles; and Steven Nelson, Professor of African and African American Art History, UCLA.

As Allison states: Bug Out Bag: The Commodification of American Fear is a photographic guidebook through post-9/11 America and introduces you to the 21st-century self-reliant American.   Throughout the book you meet 13 different preppers from different regions of America and go inside their Bug Out Bags, homes, minds, and into the trunk of their cars.  It is a documentary fine art photography book that taps into our American culture and politics, complete with conspiracy theories and Dystopian philosophy. The book includes essays by Rachel Monroe, Pete Brook, Max Presneill, and the artist, as well as the testimonies and advise from the preppers themselves. Also included are screenshots from online discussions from commenters who participated in the dialogue and joined in the project in online forums. There book can be purchased here. 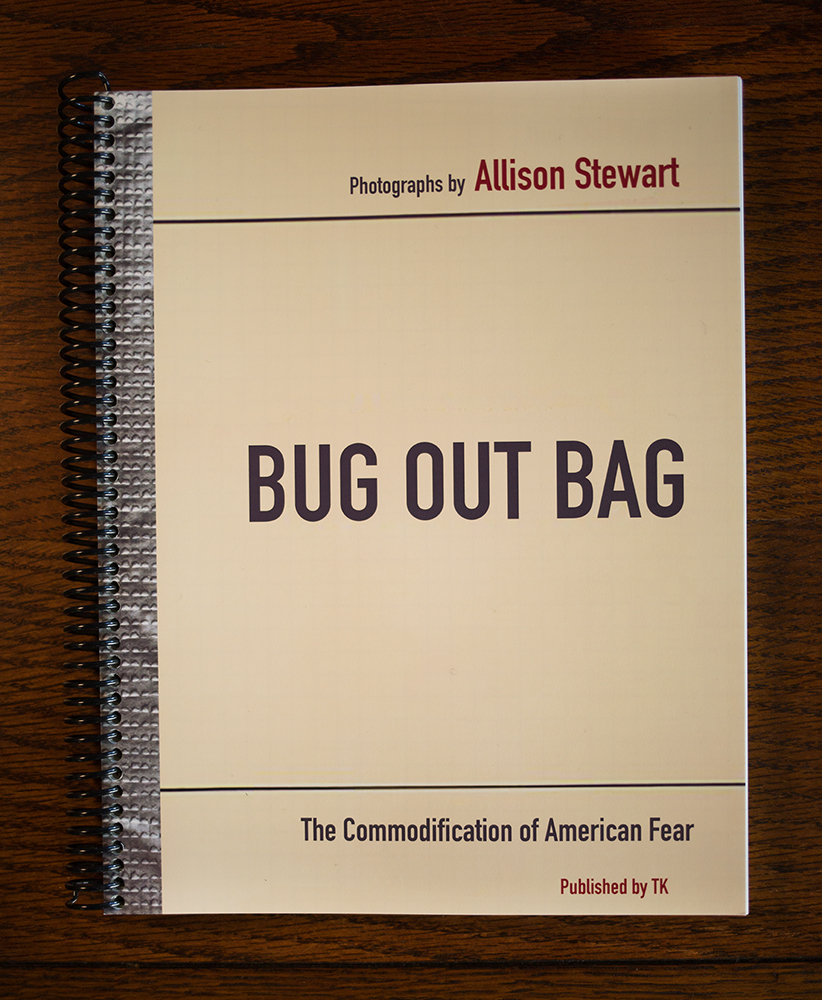 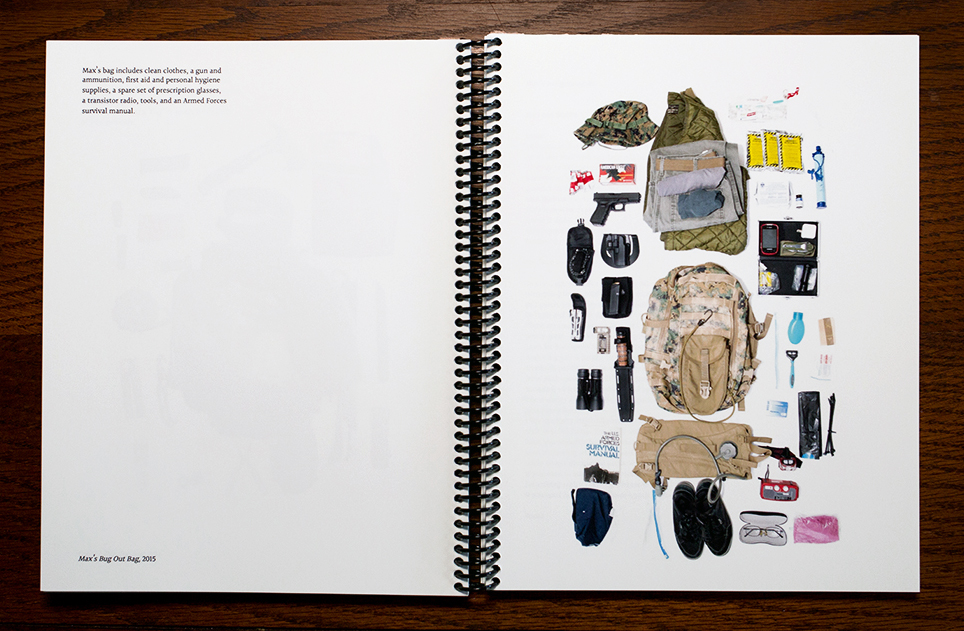 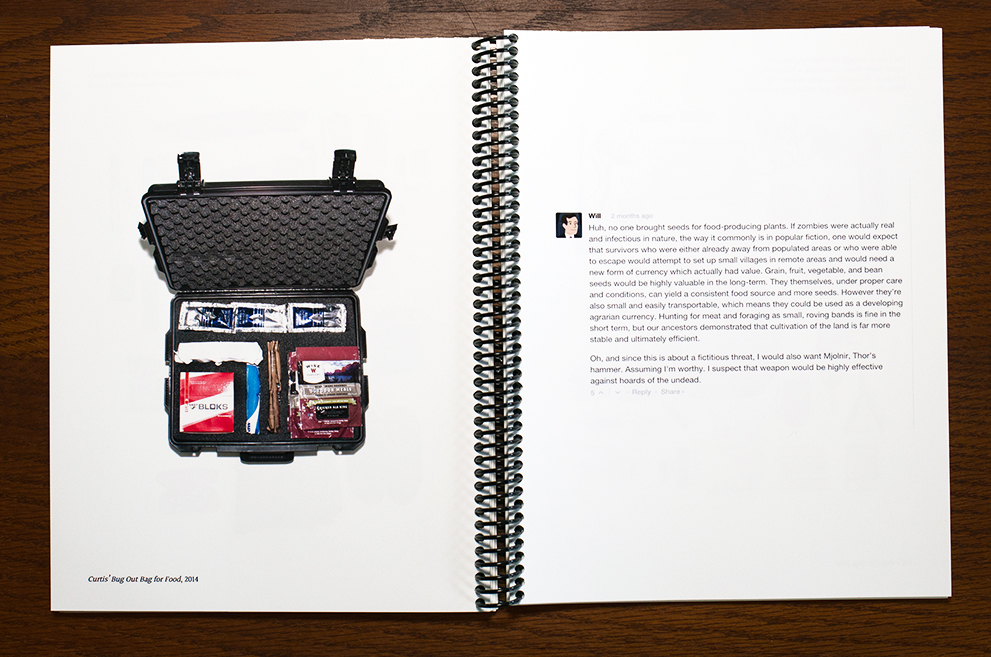 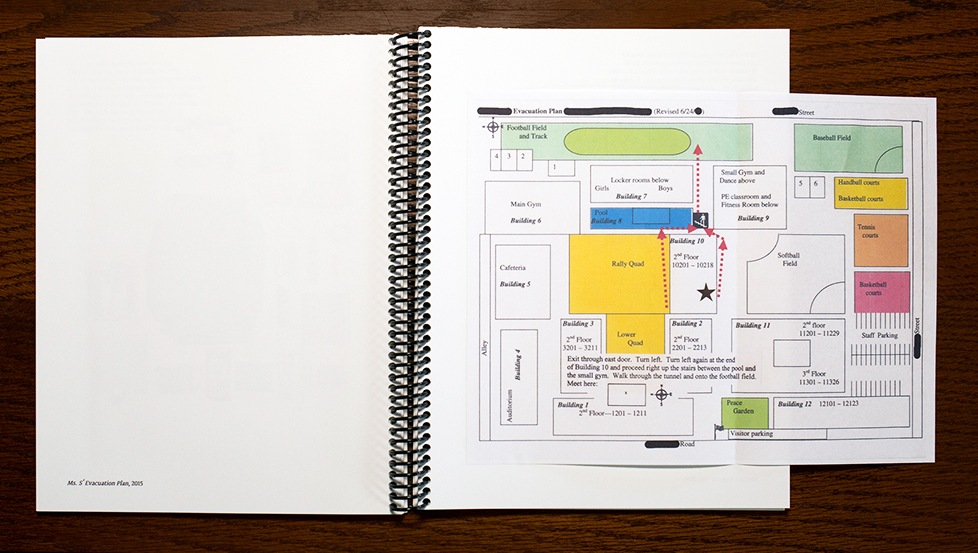 Allison Stewart grew up in Houston, Texas and currently lives in Los Angeles, CA. She received her MFA in Photography from California State University Long Beach and her BFA in Painting with a minor in Art History from the University of Houston. Her work explores the construction of American identity through its relics, rituals, and mythologies. Her work has been shown in gallery and museum spaces internationally, including the Aperture Foundation, The Wright Museum, The New Mexico History Museum, The Torrance Art Museum, Houston Center for Photography, SITE: Brooklyn, and Soho Photo Gallery in New York City. Her work is included in the Rubell Family Collection, The New Mexico History Museum Palace of the Governors Photo Archive, the University of Wisconsin Alumni Association, and private collections. 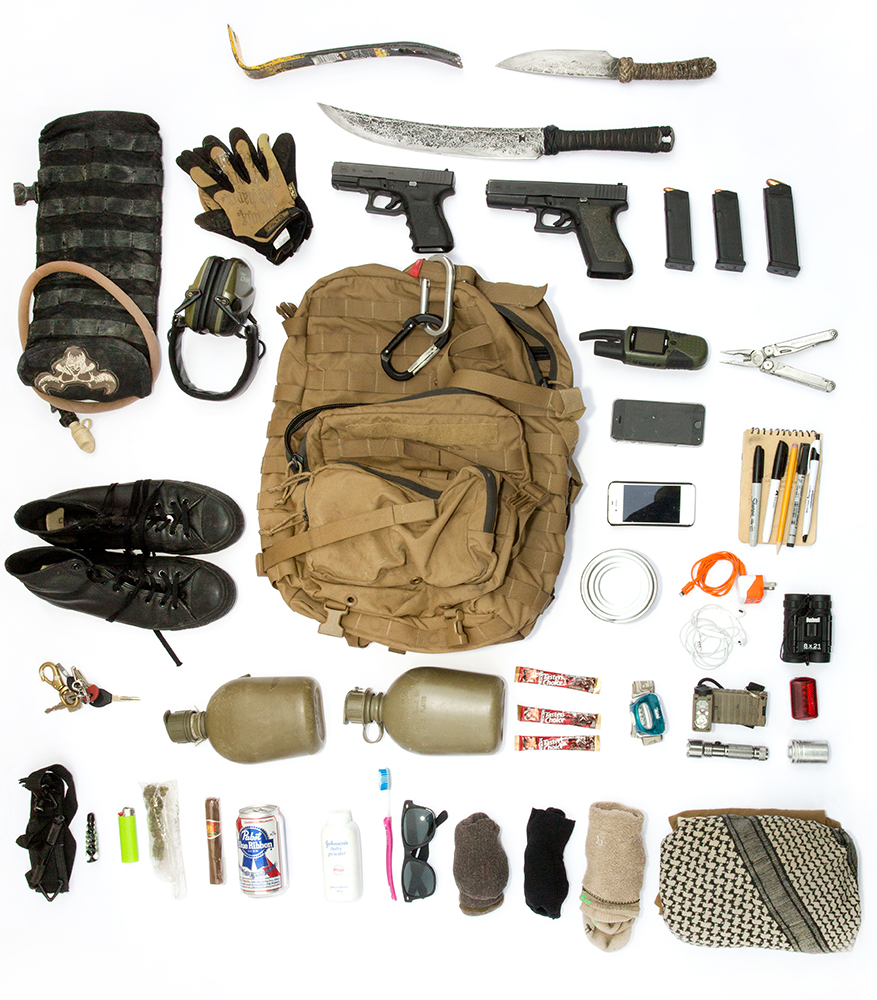 ©MM’s Bug Out Bag MM is ex military and his bag includes several weapons, hand tooled knives given to him by a fellow soldier in Afghanistan, three pairs of socks, waterproof paper and pens, an extra phone, instant coffee packets, marijuana, a beer, and a cigar.

Bug Out Bag: The Commodification of American Fear

Hurricanes. Earthquakes. Superstorms. War. Martial Law. The Rapture. The Zombie Apocalypse. Bug Out Bags are manifestations of the fears and obsessions of the 21st Century American. The Bug Out Bag is the most basic piece of gear for disaster preparedness. It is usually a backpack or an easy to carry duffel bag containing the essentials needed to sustain life for 72 hours, or to possibly begin a new civilization. As I traveled the different regions of the United States I met liberals and conservatives, atheists, evangelicals, Catholics, and Mormons. Many are the people you were taught as a child to run to when there is a disaster: teachers, soldiers, security guards, and pilots. They are prepared and they are prepared to help others. Some preppers showed me their gun collections, one collection was in the trunk of his car. I met a soldier whose bag includes hand tooled knives gifted to him by a fellow soldier while serving in Afghanistan. In Texas I met a man who only had a bottle of tequila and phenobarbital in his Bug Out Bag. His plan was to find a shady tree and escape the Apocalypse entirely. I photographed a public high school teacher’s classroom Bug Out Bag, provided for her by the PTA and then supplemented by the teacher. I also visited a store that will sell you a Bug out Bag for your cat for $90. Each bag becomes a portrait of its owner, showing us their most basic needs and also their fears in the face of environmental and global change. 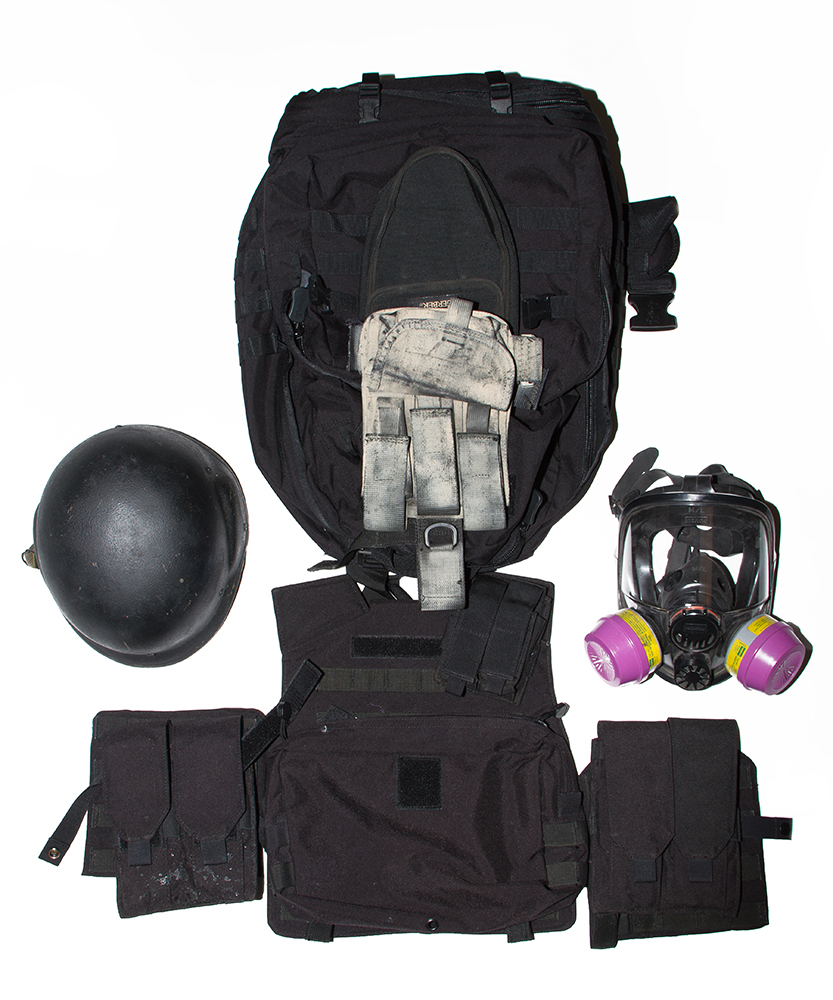 ©Allison Stewart, Jeff’s Go Bag, Jeff’s Go Bag includes a bulletproof vest, a gas mask, and a bulletproof helmet. It was designed to get him to his car, where he had guns, knives, an axe, camping gear, water, and food. He also had property off grid where he would bug out to when SHTF (shit hits the fan). 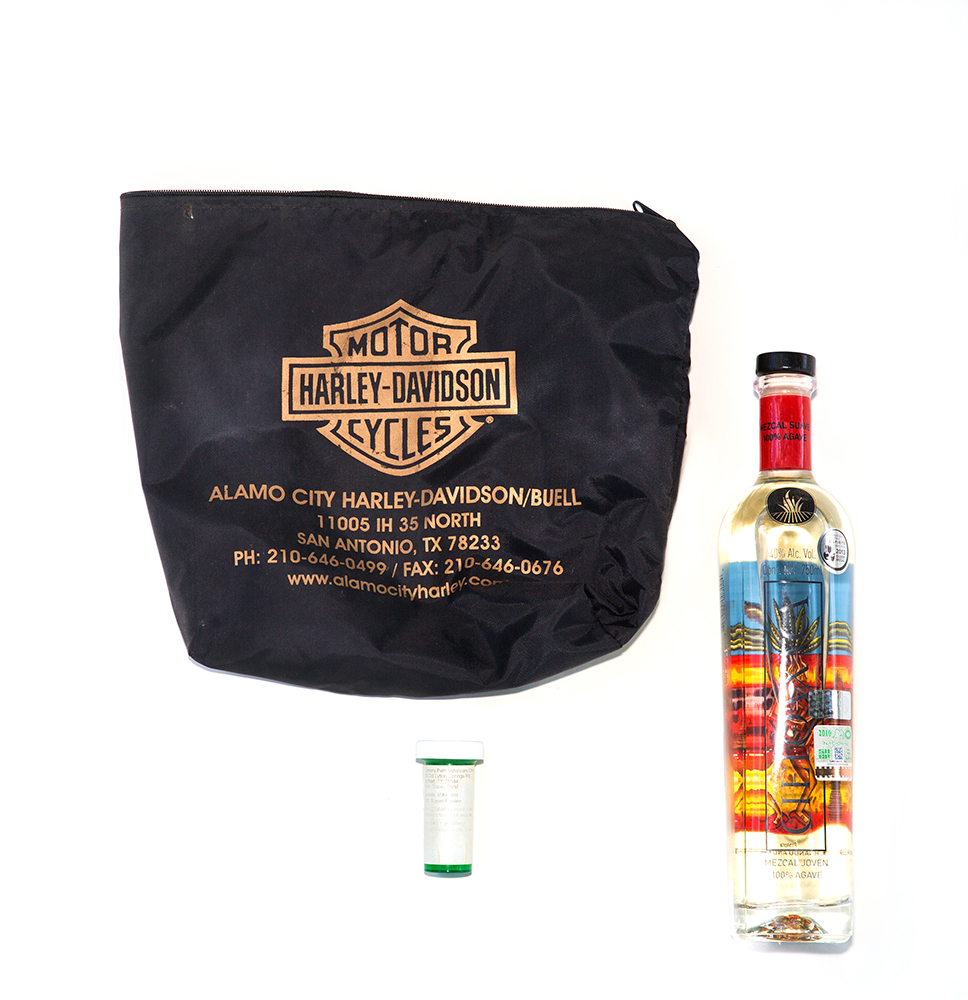 ©Allison Stewart, Mike’s Bug Out Bag, Mike lives in Texas. His bag contains only Tequila & Phenobarbital. His plan is to find a shady tree and escape the Apocalypse entirely.

The contents reflect the survivalist instincts and character of each owner. Everyone I meet tells me that preparedness is a necessity in Post 9/11 America. They are eager to discuss their fears, share tips and some even share their resources. Most are community minded but some are fiercely independent. Independence is a fundamental principle when describing the American character. We praise the self reliant man and credit him for the shining city upon the hill, but Twenty-first Century capitalism has changed Americans and our fears are running rampant. The new self-reliant American no longer experiences transcendence in nature as Thoreau once did, but instead, escapes to nature in an effort to hoard and protect property. Prepping has become a capitalist enterprise, banking on our fears and desires for stability. – Allison Stewart 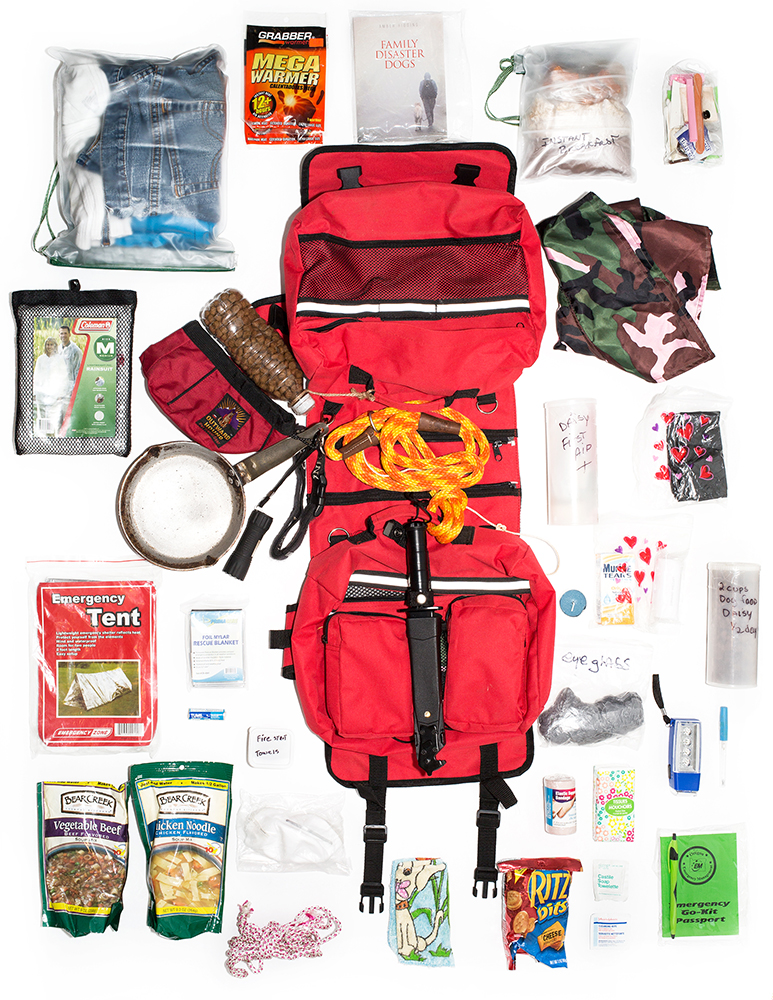 ©Allison Stewart, Daisy’s Bug Out Bag, Daisy is a trained Disaster Dog. She is trained to help her family in an emergency situation, including search and rescue. She carries supplies for herself as well as for her family. 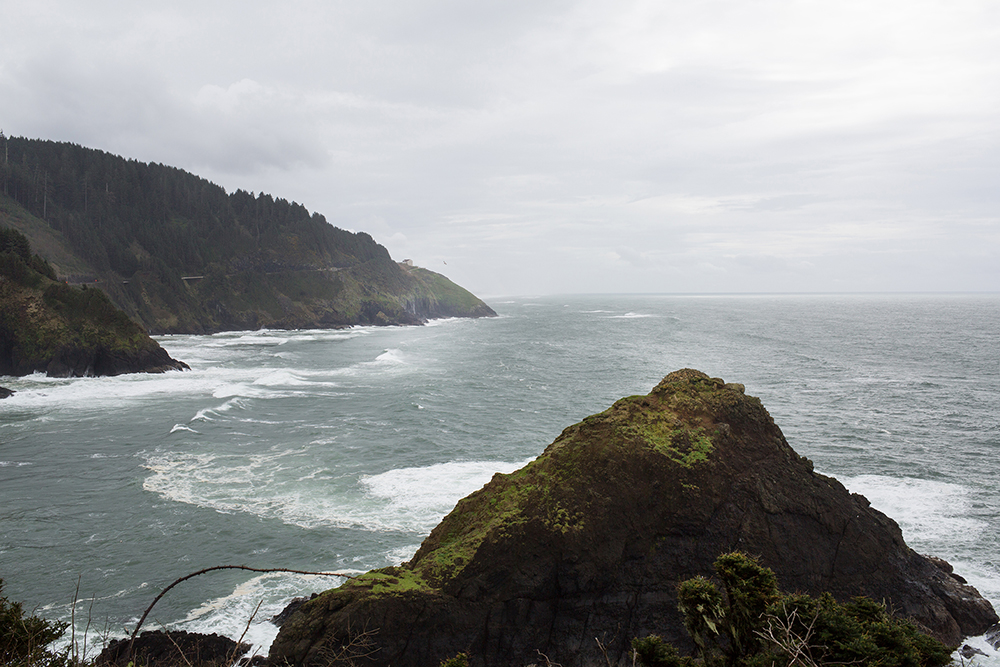 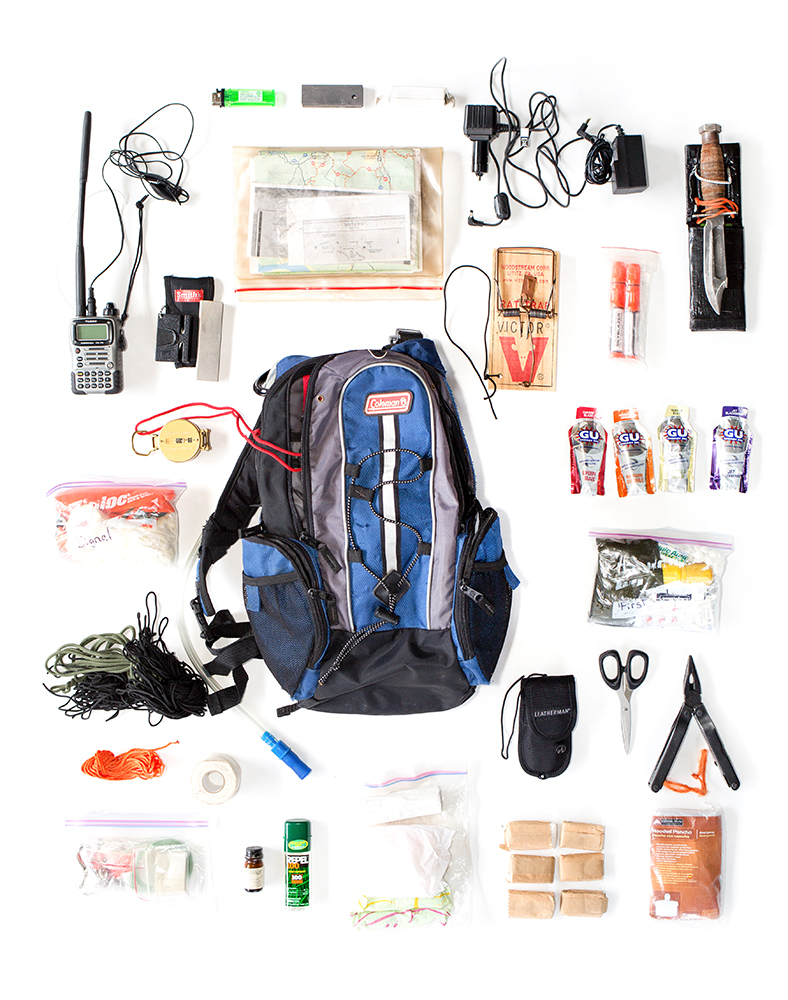 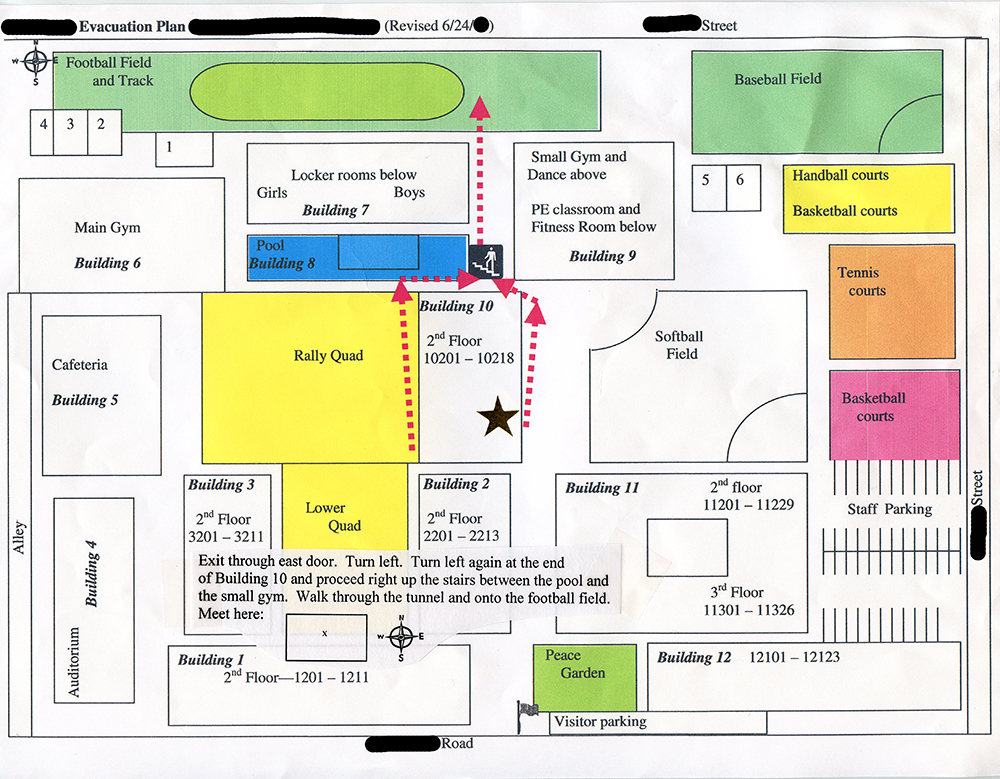 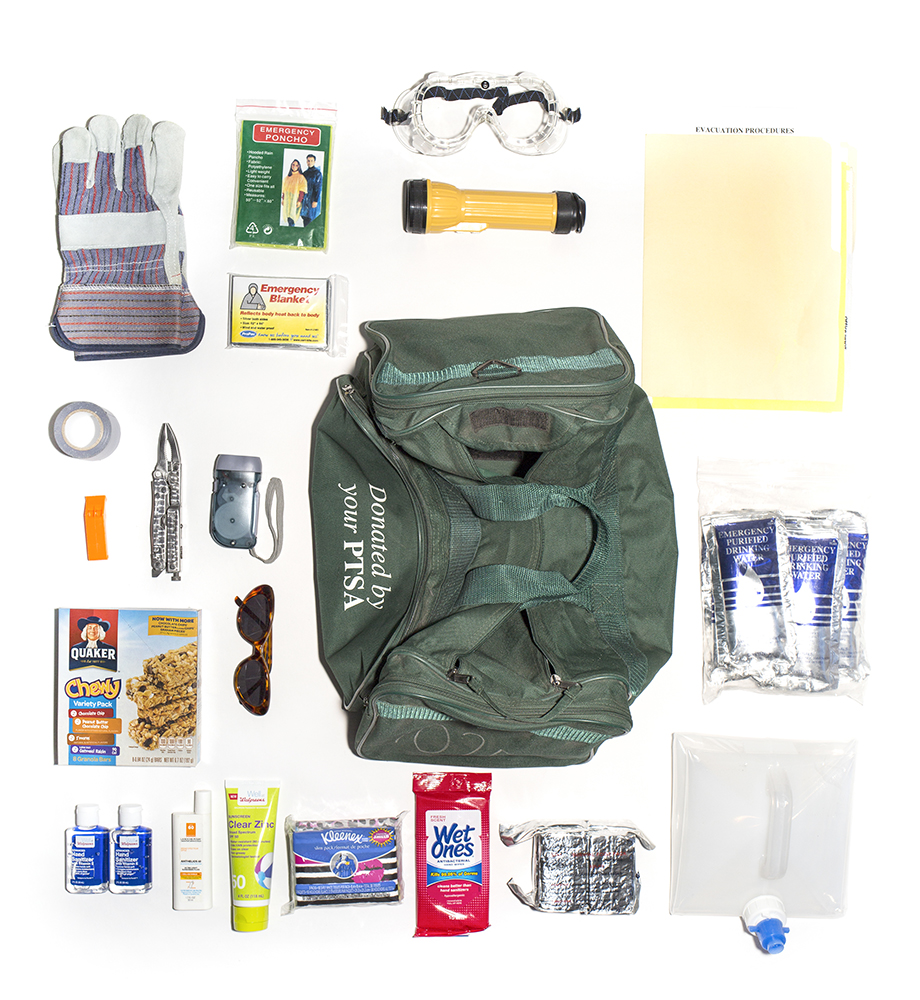 ©Allison Stewart, Ms. S’ Bug Out Bag, Ms. S is a public school teacher and her Bug Out Bag was given to her by the PTSA. She is required to carry her bag during evacuation drills. It contains emergency plans and a roster of her students, water, food, a flashlight, goggles, and emergency poncho and blanket, gloves, and tape. After a bomb scare evacuation Ms. S supplemented her bag with sunscreen, sunglasses, wet ones, Kleenex, hand sanitizer, and granola bars. 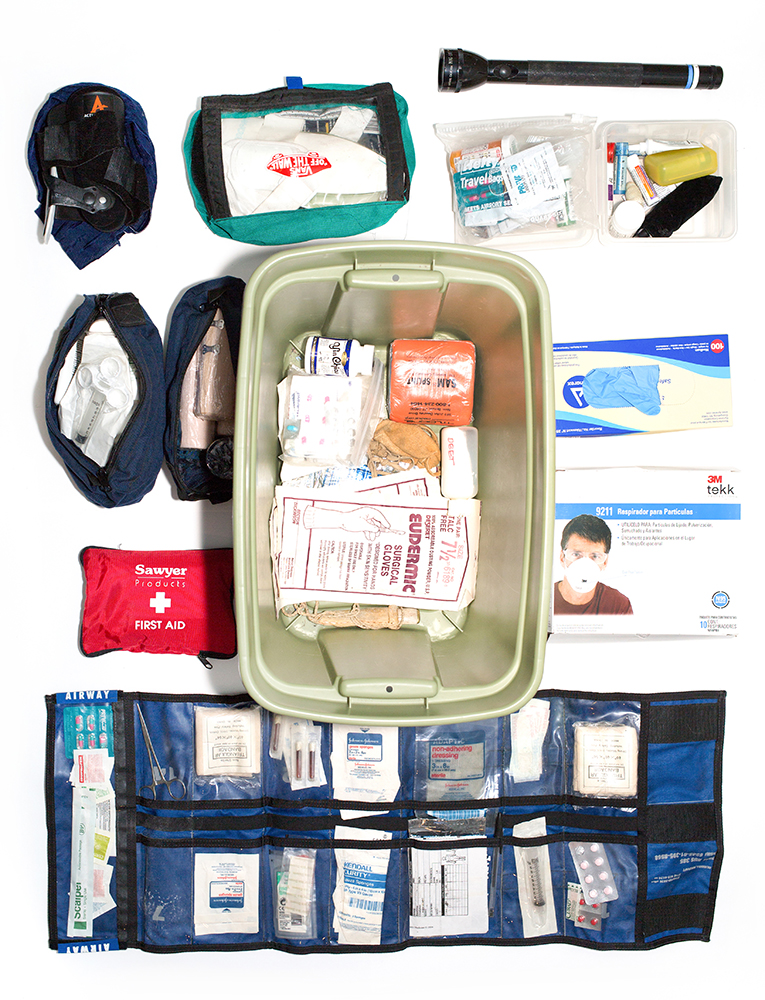 ©Allison Stewart, Shahnnen’s Medical Box, Shahnnen lives in the Pacific Northwest and has a one car garage prepped for disaster. This is her Medical Box, which contains medications, gloves, respirators, surgical supplies, splints, bandages, needles, and a flashlight. 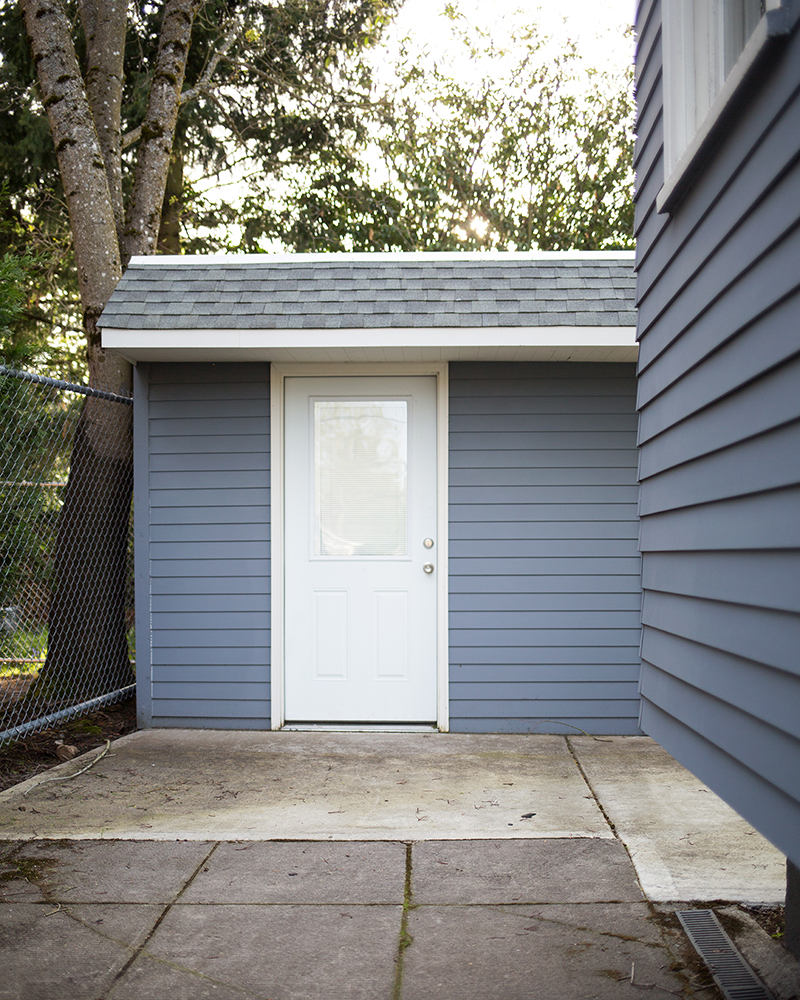 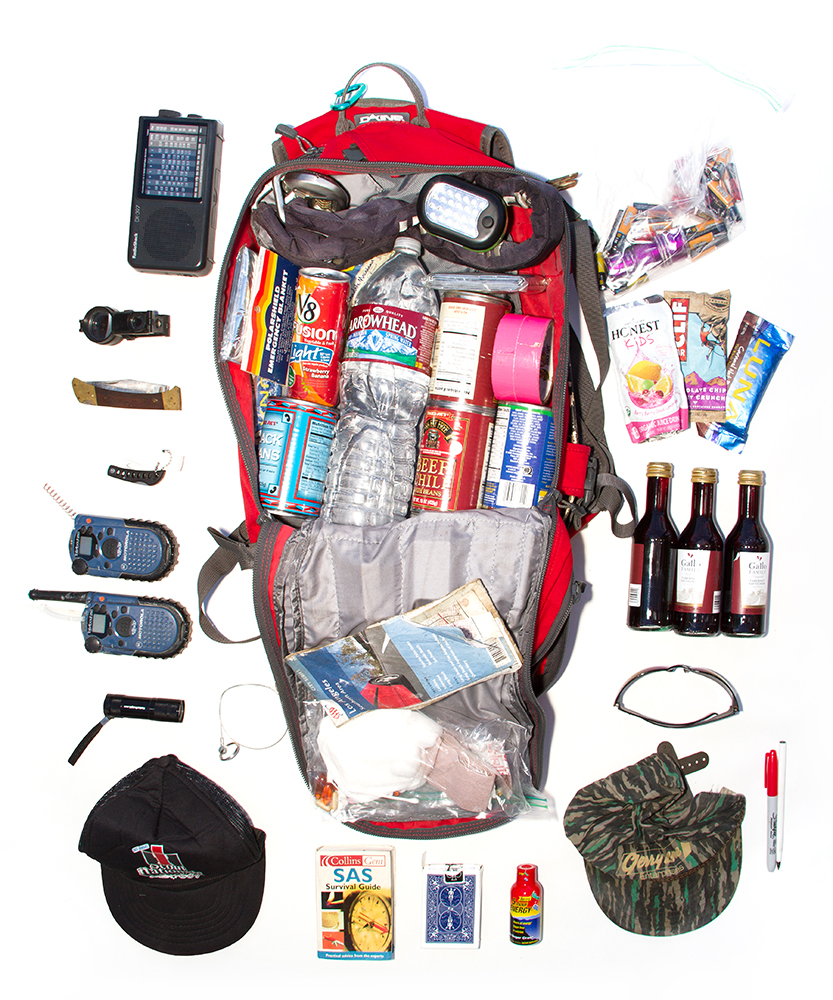 ©Allison Stewart, Sam’s Bug Out Bag, Sam is a dad in California and his bag includes a variety of foods, walkie talkies and radio for communication, a deck of cards, and wine, which Sam heard counteracts the effects of radiation poisoning 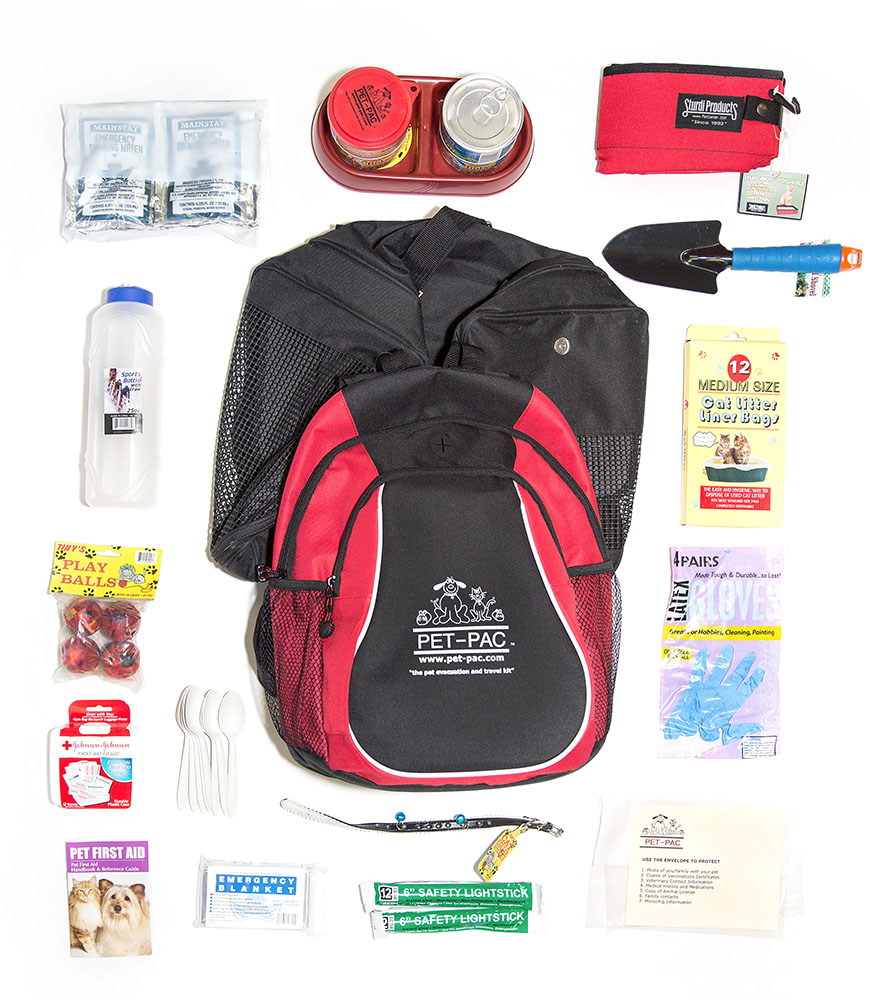 ©Allison Stewart, Pet Pac for Cat, The Pet Pac for a cat retails for $90.00 and includes a bag for pet records, food, bowls, water, a collar with bells, a portable litter box, a trowel, a pet first aid kit, and toys. 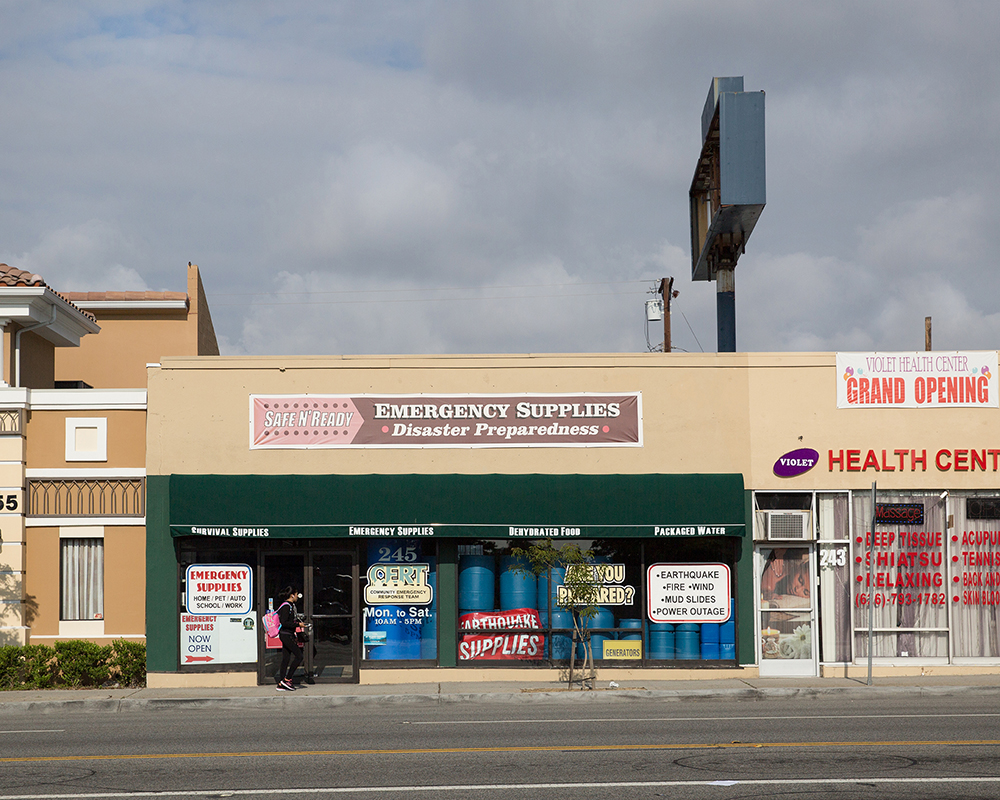 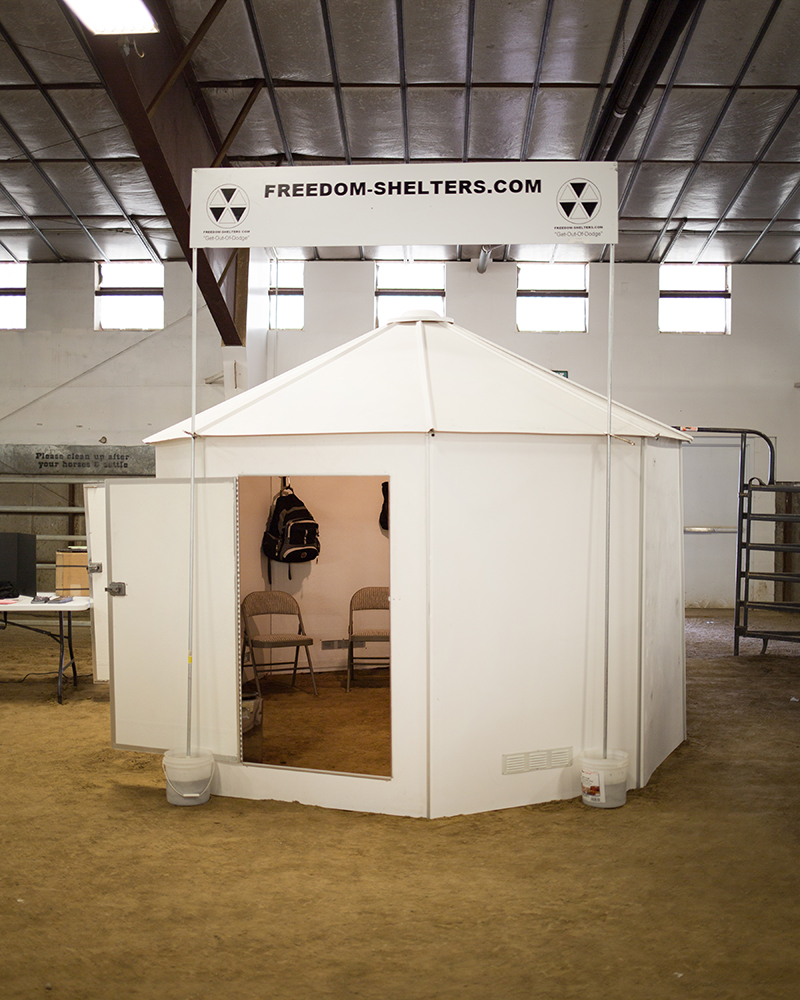