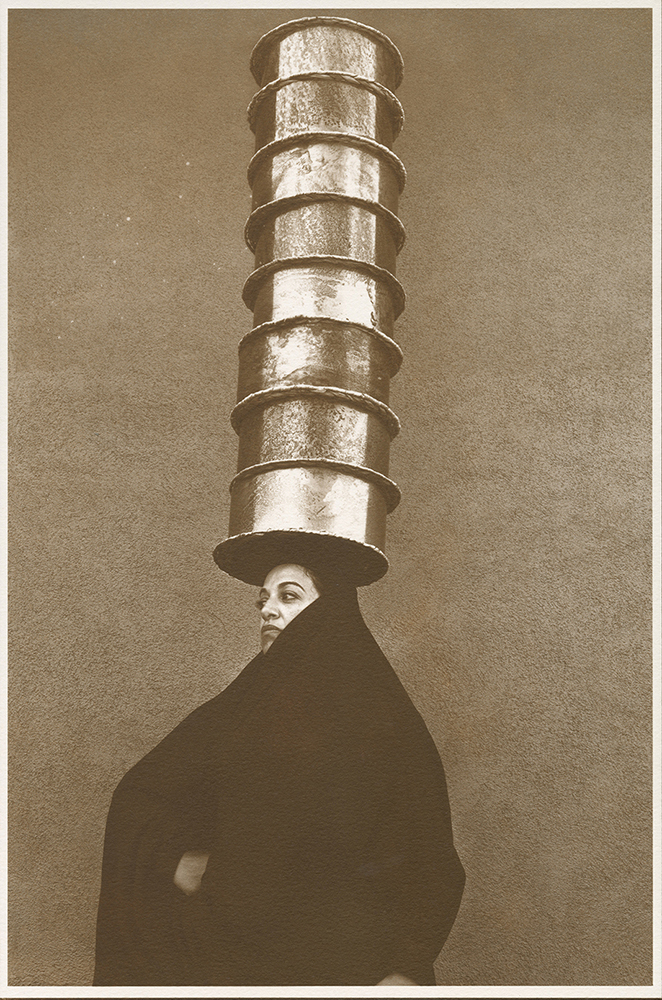 Congratulations to Sama Alshaibi for being selected for CENTER’s Project Development Grant recognizing her project, Carry Over. The grant offers financial support to fine art, documentary, or photojournalist works-in-progress and includes a cash award to help complete a project as well as platforms for feedback and professional development opportunities for the work’s final stages. This grant is awarded to projects that are still in progress and have not been exhibited or published.

I feel extremely fortunate to have served as the juror for CENTER’s 2019 Project Development Grant. The breadth and diversity of submitted projects was truly impressive, and through the process of reviewing over 600 submissions I was exposed to an astounding array of new work. Many of the submitted projects address urgent issues of our time — including series related to climate crises, global migration, and visibility of at-risk or oppressed populations, among many other complex and often-intersecting subjects. Though perhaps not obvious from first glance, Sama Alshaibi’s Carry Over is such a project. (To use the artist’s own words from her accompanying statement, “the project resists superficial analysis.”) Ingeniously and exquisitely conceived utilizing a photographic process associated with the early histories of the medium — albumen printing — Alshaibi’s work not only looks back, but also reflects upon the current moment and the persistent effects of these photographic histories on contemporary representations of women. These pictures employ and interrogate the characteristics found in Orientalist portraits produced by Western-run studios for Western audiences, while also bringing them forward to bear on subsequent generations including our own, reminding us how — to use Alshaibi’s words — “domination is articulated through photographs.” 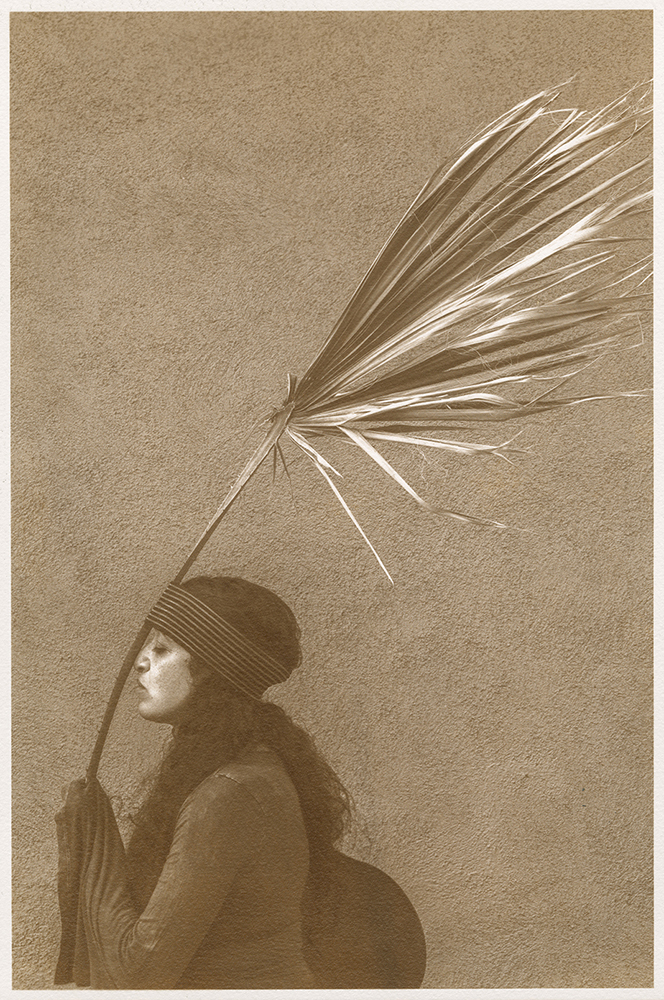 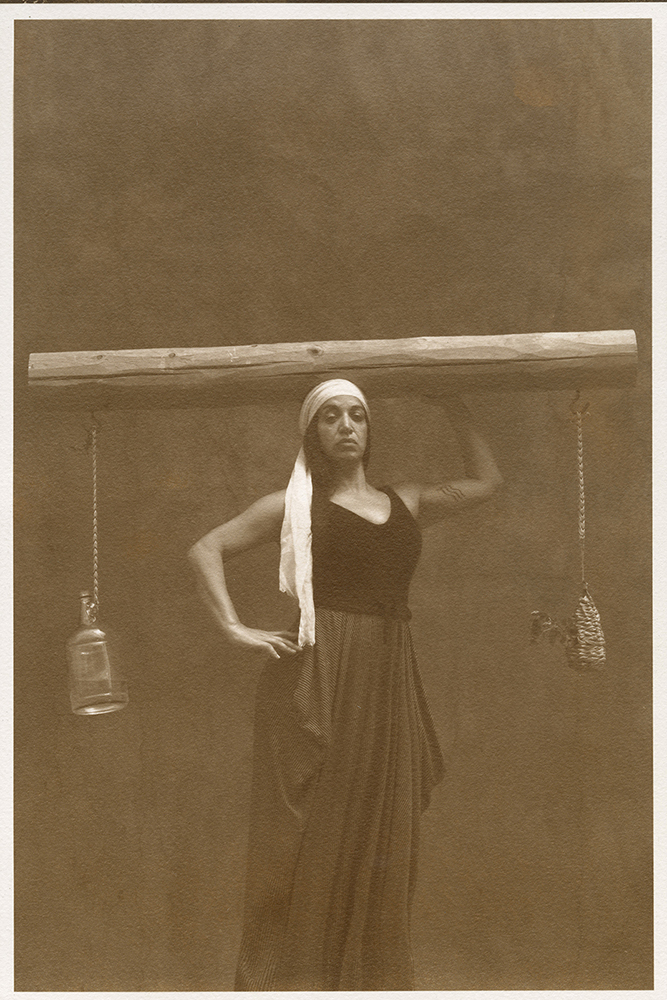 I’m interested in the societal impact of unequal power relations between the West and the Middle East, and how that domination is articulated through photographs.  Woven among the aesthetic experiments of my work are interrelated mechanisms of forced migration, social fragmentation, and the aftermath of displacement. By using Albumen printing, a popular print process of the 19th and early 20th century in my newest project Carry Over, I am evoking a near century in which the West controlled the Middle East and North Africa (MENA). Photography studios were largely run by Western photographers, and the images they produced were valued as characterizations of the region. The appetite for the exotic, the distant lands and peoples living a simpler time by Western audiences meant the Orientalist photographer’s vision of MENA women were captured to express inferiority, picturesqueness of native culture and as the exotic sexual object. Carry Over recalls and subverts historical Orientalist portraits made of MENA women who were often depicting carrying vessels of bread or water on their head and staged lounging with ‘oriental’ props that built an uncritical fantasy of the hidden harem for Western audiences. My work amplifies the physical burden of representation found in those photographs, while using traditional printing processes from the colonial era.  In one photograph, the once compulsorily ceramic water jug is now shaped as a massive wasp’s nest or a grenade and is hoisted high above the subject’s head. Dressed in all white, the subject depicts the Herculean task of surviving conflict, especially when one’s humanity isn’t afforded to them through their representation. In another image, the mashrabiya, the Arabesque latticework of carved wood normally found on the windows of Iraqi or Egyptian homes, is substituted by laced razor-wire cutouts. They trap the subject’s face into a box formed as a water pipe– another compulsorily cultural object found in most of the historical Oriental photographs of MENA women. I’m connecting the Western desire to peer into the harem’s private world, a space of fantasy and imagination, to the very real invisibility of MENA women’s complexities hidden behind the West’s obsession over their surfaced attire, the hijab. It also references the invisibility of Arabs in general, trapped in war zones, living behind boundaries they cannot escape. In other images, the subject is the physical embodiment of a water fountain or an electricity pole. The implication is that the subject not only is the bearer of the absurd and irrational, but conversely, that in her total isolation, she is transformed from an object of passivity into an active body that sustains and supplies oneself. She is inscribing through her own body, a mechanism of survival. The project resists superficial analysis that reduces MENA women’s rights and opportunities to what they do and don’t wear. MENA women do not merely bear the burden of representation, but also actively and currently, struggle with resource access, security, displacement, socio-economic mobility, and very simply, human rights.  Carry Over confronts the historical portraits through a feminist and post-colonial lens. 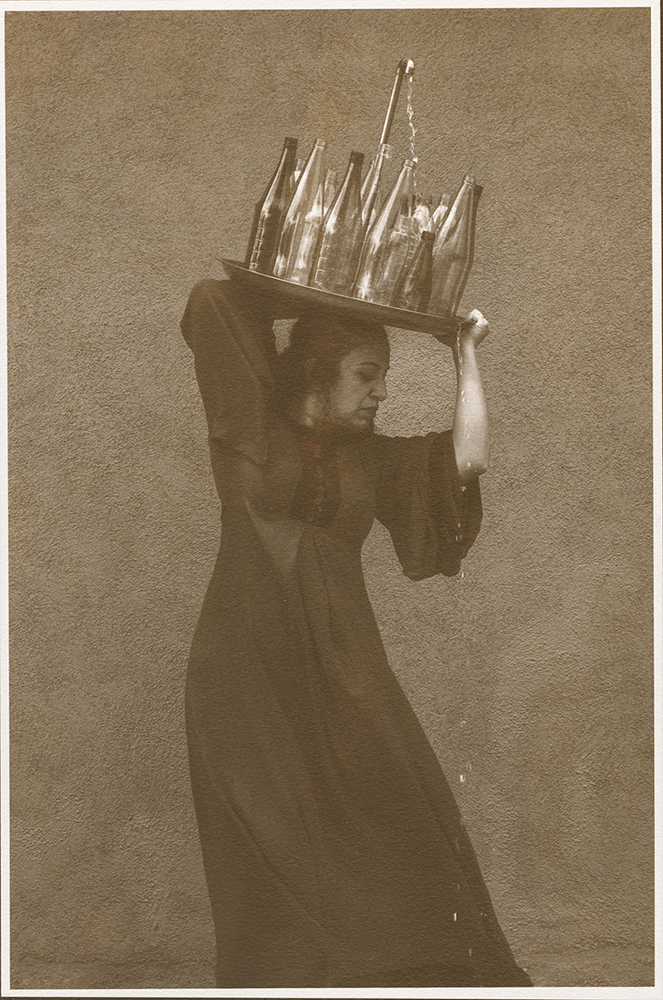 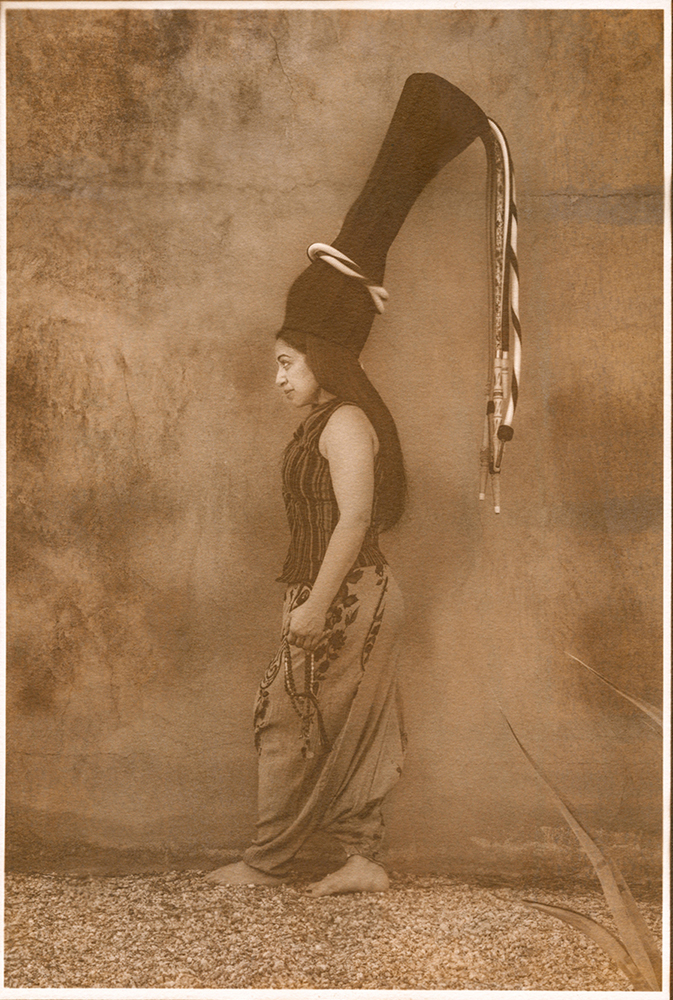 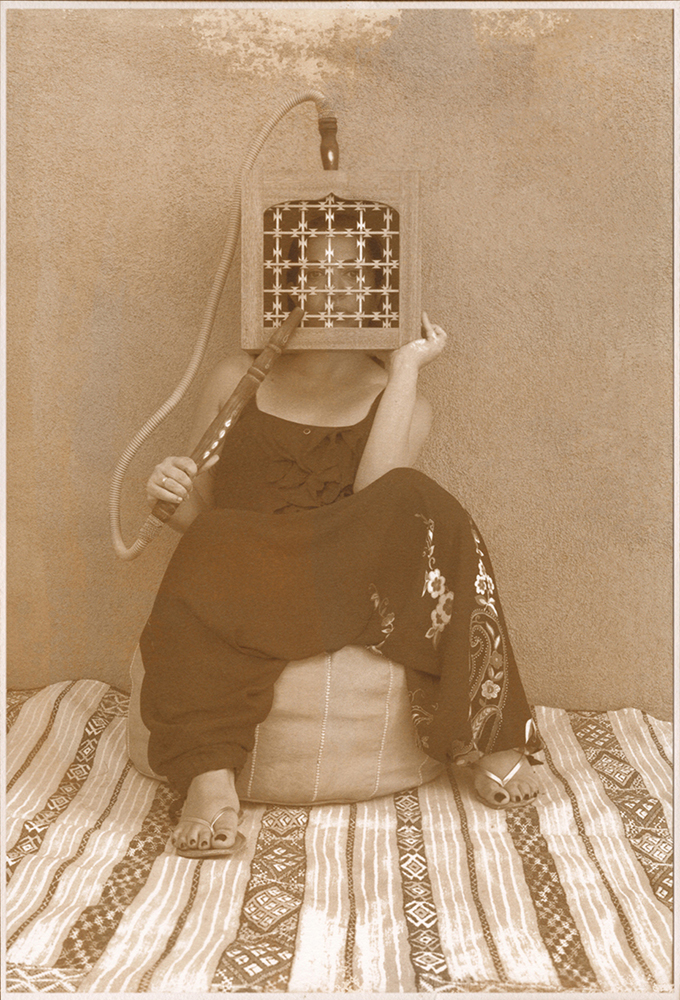 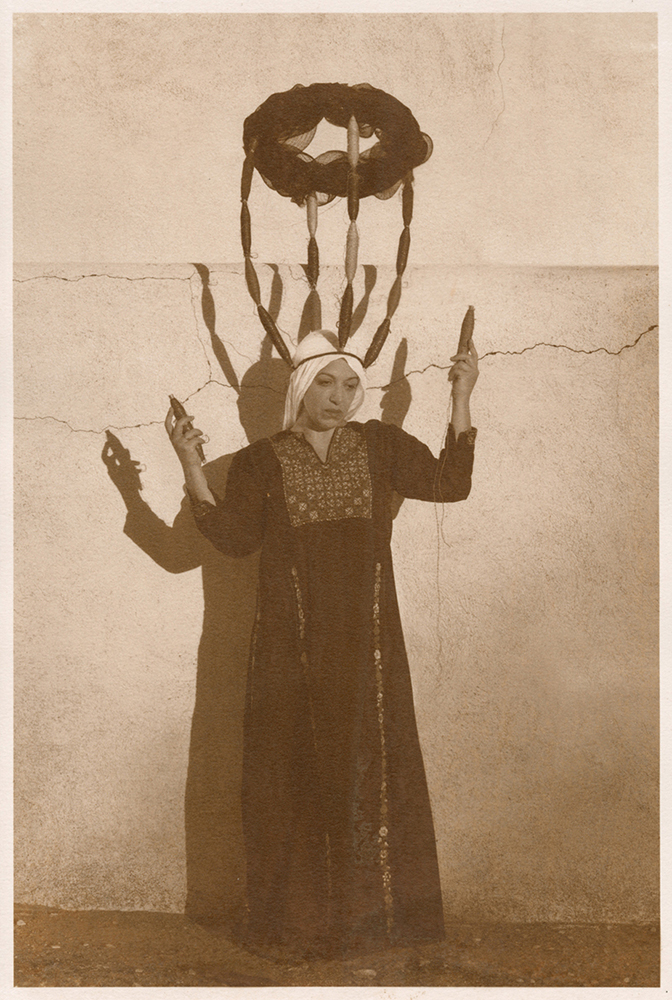 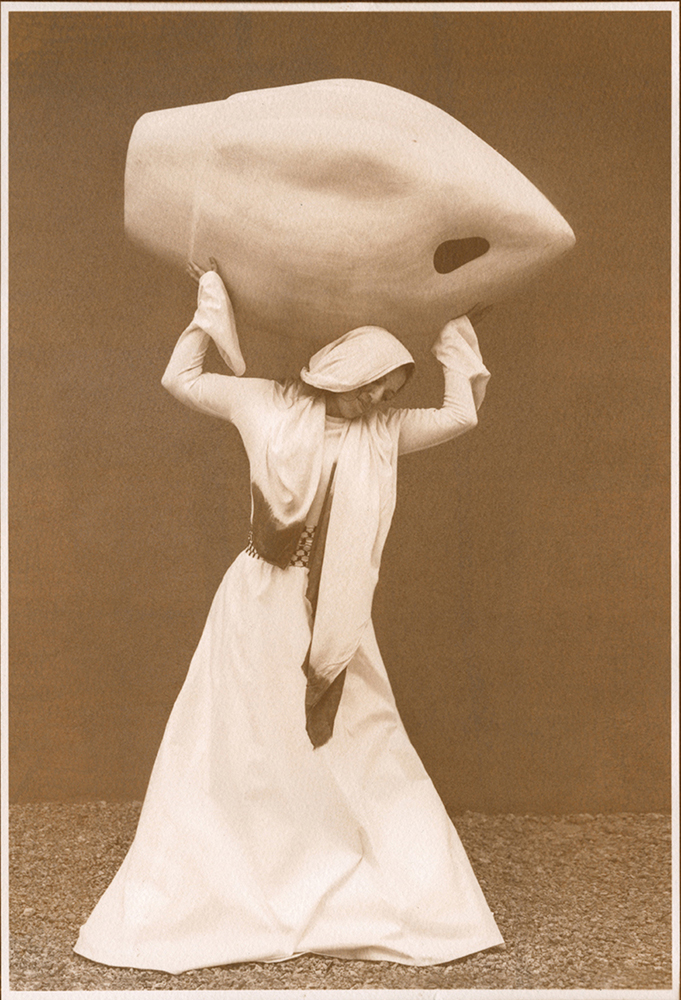