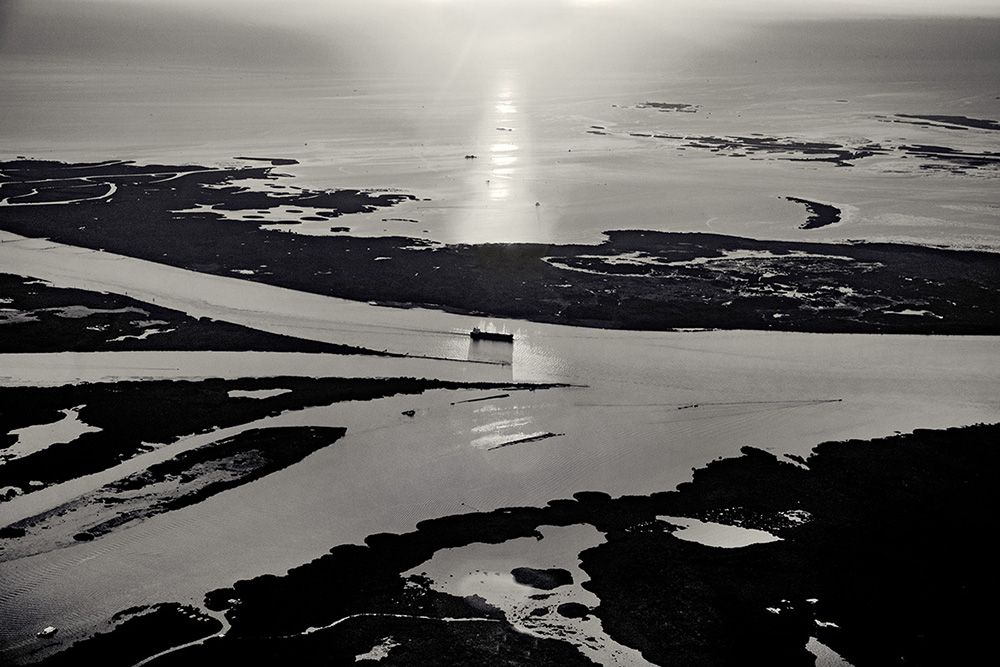 Some time ago, I featured David Freese‘s book, East Coast: Arctic to Tropic that followed an earlier effort, West Coast: Bering to Baja, documenting the coasts of our continent. Comingin July, David has a new book published by  George F. Thompson in Staunton, VA, Mississippi River: Headwaters and Heartland to Delta and Gulf which completes his trilogy on North American Waters. As David states: It was fitting to turn to the middle of the country, to what some people call the third coast and broaden the themes even more. I photographed the entire length of the river from Minnesota to the Gulf of Mexico. The photographs illustrate the ongoing dangers posed by increased flooding and the protective measures taken by the U. S. Army Corp of Engineers to try and keep a restless river in check. There are environmental concerns, ranging from habitat loss to agricultural and pesticide runoff, and the legacy of slavery and the removal of native peoples persist. It’s a river that reveals a complicated past, present, and future as humankind attempts to control nature. American history bends and turns in its waters.

The book, showcases a masterful visual journey from its source at Lake Itasca in Minnesota 2,552 miles south to the Gulf of Mexico. Mississippi River: Headwaters and Heartland to Delta and Gulf is available on Amazon and includes an essay by Simon Winchester and a foreword by Sarah Kennel, Curator of Photography at the High Museum of Art in Atlanta. Freese’s photographs reveal a wide diversity of industry and farmland, cities and towns, landscapes and wildlife,  and the constant flow of goods, grain, and fuel, up and down the country’s major shipping artery.David Freese worked for 35 years as a corporate/industrial photographer on location but has always pursued his image making passions as an artist and as an educator who now devotes his full attention to various fine-art photography projects/books and to teaching in the Film and Media Arts Department at Temple University.Freese is the photographer/author of West Coast: Bering to Baja released in 2012. A companion book, East Coast: Arctic to Tropic, was released in January 2017. Mississippi River: Headwaters and Heartland to Delta and Gulf, to be released in spring 2020, will complete a trilogy on North American waters in a time of drastic climate change. His work has been published in Communication Arts, MIT Technology Review, Philadelphia Inquirer Magazine, Photo District News, Photo Insider, Polaroid International, Popular Photography, Smithsonian Air and Space, Time-Life Books, and View Camera. Images and book reviews have been published at aPhotoEditor; Hyperallergic; Il Post, Italy; Lenscratch; Monthly Photography, South Korea; Photographer’s Forum and Slate Behold, The Photo Blog;

Freese has been awarded artist grants for photography by the Ruth and Harold Chenven Foundation, the Puffin Foundation, and the Aegon Transamerica Foundation. He has also received a Polaroid Artist Support Grant and both a Fellowship in the Visual Arts and a Special Opportunity Stipend from the Pennsylvania Council on the Arts. 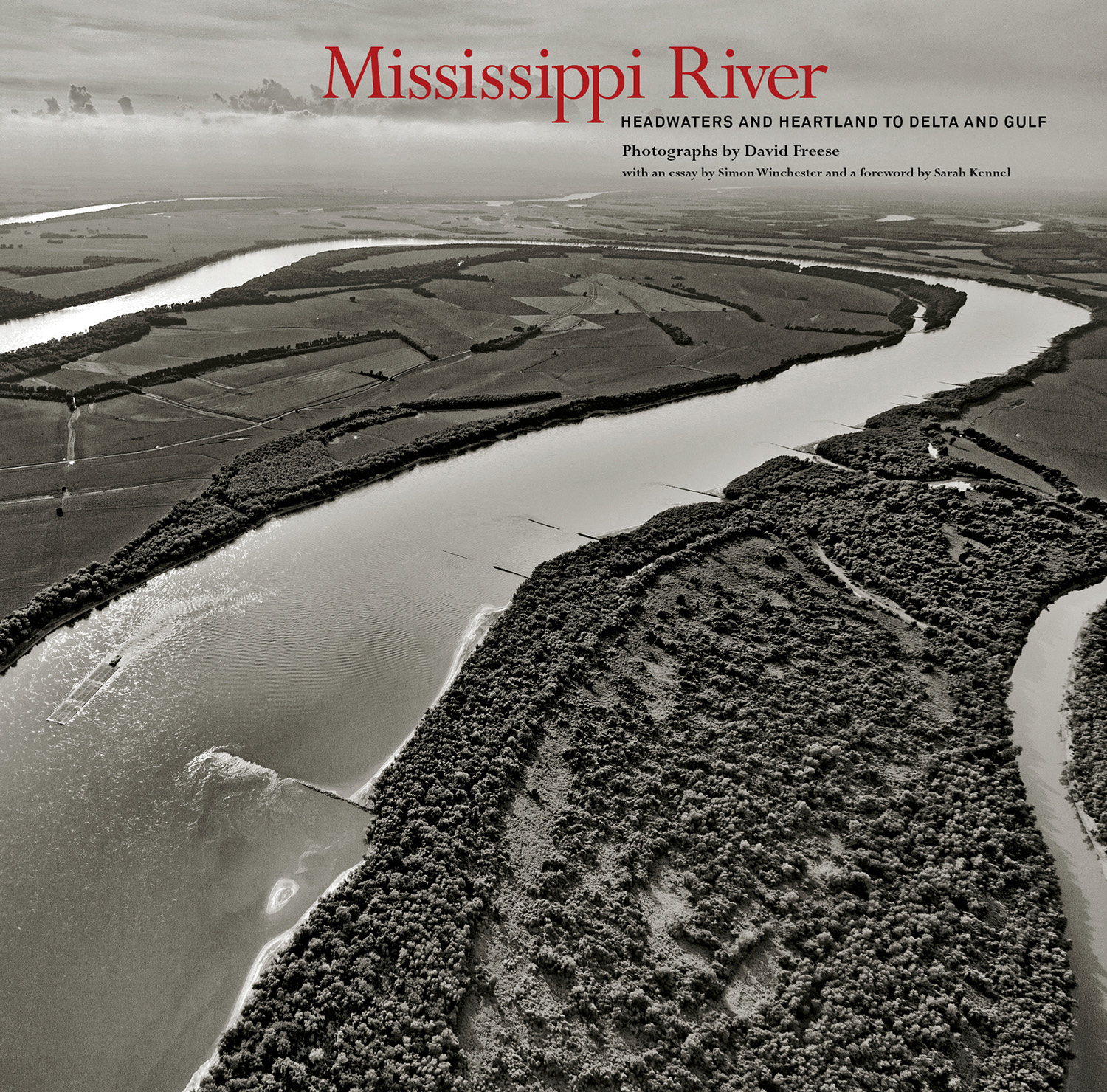 Mississippi River, Headlands and Heartlands from Delta to Gulf

The Mississippi River is a beloved, often romanticized character in American history, as reflective of American land and life as any other American place. The United States depends on the Mississippi like no other river, and it is my hope that my photographs—from the ground and the air—convey the wonder, complexity, and depth of its being. My journey was as full and as wide and as rapturous as the river itself. It was a head-turning experience to drive and fly its length, in different seasons, to witness its sublime scenery and changing landscapes, to visit its charming communities and impressive cities, and to meet the lovely, welcoming people who live along it, many of whom produce and bring food, fuel, and cargo to the entire nation and world. Yet it was often difficult to drive and fly over places that witnessed slavery and the forced removal of native peoples. And the journey was, at times, tempered by an anger at ongoing environmental harm and neglect. We, as citizens and stewards, have created the contradictions. But, as sure as water seeks the shortest path downhill, the Mighty Mississippi will always find its true way. 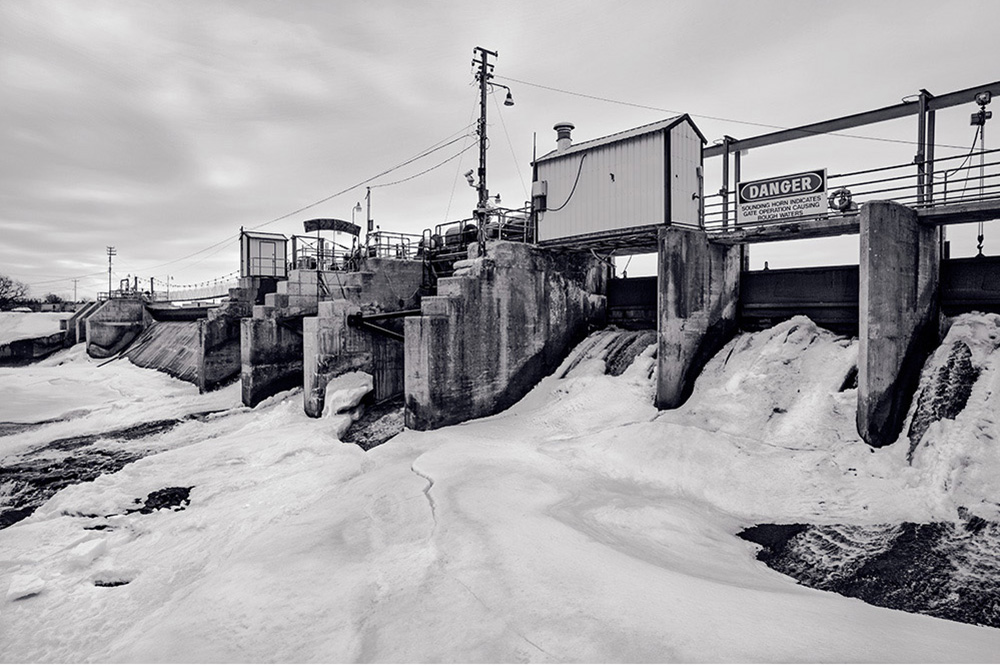 Sarah Kennel was born in Los Angeles, California, in 1970 and grew up there. Kennel earned a B.A. from Princeton University and completed her M.A. and Ph.D. in art history from the University of California, Berkeley. She has lectured extensively on photography, modern art, and the history of dance and has taught at Princeton University, the University of California, Berkeley, and George Washington University. Kennel joined the High Museum in Atlanta in 2019 as the Donald and Marilyn Keough Family Curator of Photography, where she oversees one of the most important collections ofphotography in the Southeast and manages a robust exhibition and acquisition program. From 2015 to 2019, Kennel served as the Byrne Family Curator of Photography at the Peabody Essex Museum in Salem, Massachusetts, where she helped to build an extensive collection of global photography and curated several exhibitions, including “Sally Mann: A Thousand Crossings” (2018); “A Lasting Memento: John Thomson’s Photographs along the River Min,” and “Order of Imagination: The Photographs of Olivia Parker” (2019). From 2004 to 2015, Kennel served as a curator in the Department of Photographs at National Gallery of Art in Washington, D.C., where she curated many exhibitions and authored numerous publications, including Charles Marville: Photographer of Paris (University of Chicago Press and National Gallery of Art, 2013); In the Darkroom: An Illustrated Guide to Photographic Processes
before the Digital Age (Thames & Hudson, 2010), and In the Forest of Fontainebleau: Painters and Photographers from Corot to Monet (Yale University Press and National Gallery of Art, 2008).

Simon Winchester was born in North London, England, in 1944, and grew up there. After receiving an undergraduate degree in geology from Oxford University in 1963, he worked as a field geologist in Africa for a Canadian mining company before switching careers in 1967 and becoming a journalist for The Guardian and a frequent commentator on, and contributor to, BBC radio. Over the years, Winchester has written for Smithsonian, National Geographic, and Conde Nast Traveler magazines, and he is the author of more than twenty best-selling books, including The Professor and the Madman: Tale of Murder, Insanity, and the Making of the Oxford English Dictionary (Harper Perennial, 1999), The Map that Changed the World: William Smith and the Birth of Modern Geology (Harper Perennial, 2001), Krakatoa: The Day the World Exploded: August 27, 1883 (Harper Perennial, 2003), A Crack in the Edge of the World: America and the Great California Earthquake of 1906 (Harper Perennial, 2005), Atlantic: Great Sea Battles, Heroic Discoveries, Titanic Storms, and a Vast Ocean of a Million Stories (Harper Perennial, 2010), The Men Who United the States: America’s Explorers, Inventors, Eccentrics, and Mavericks and the Creation of One Nation, Indivisible (HarperCollins, 2013), Pacific: Silicon Chips and Surfboards, Coral Reefs and Atom Bombs, Brutal Dictators, Fading Empires, and the Coming Collision of the World’s Superpowers (HarperCollins, 2015), and The Perfectionists: How Precision Engineers Created the Modern World (HarperCollins, 2018). In 2006, Winchester was appointed an Officer of the Order of the British Empire by Queen Elizabeth II for “services to journalism and literature,” and, on July 4, 2011, he became a naturalized U.S. Citizen on board the U.S.S. Constitution. He divides his time between New York City and a small farm in the Berkshires of western Massachusetts. His Website is www.simonwinchester.com. 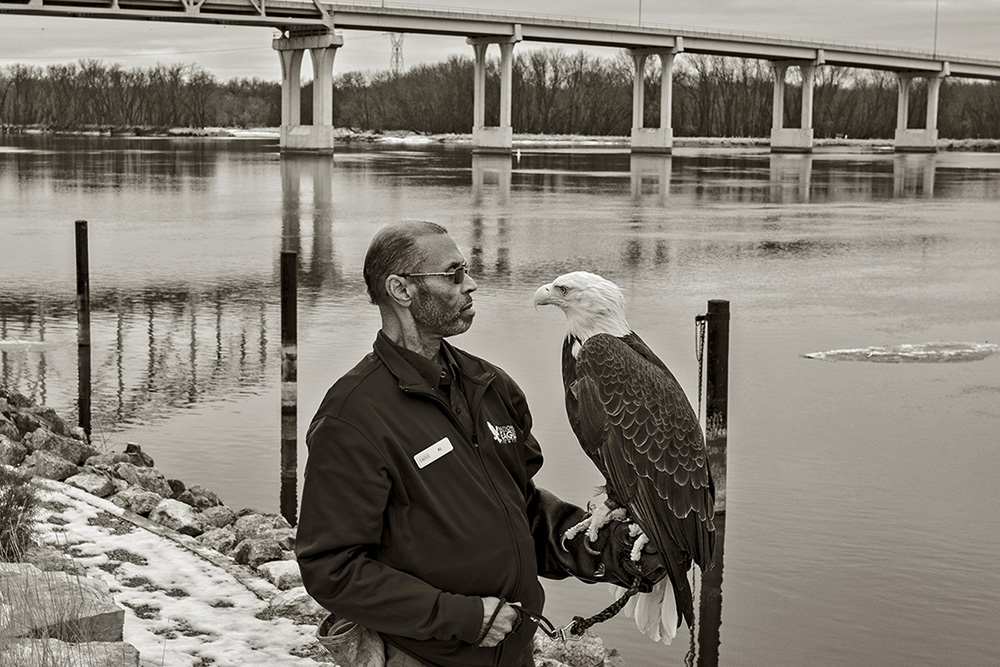 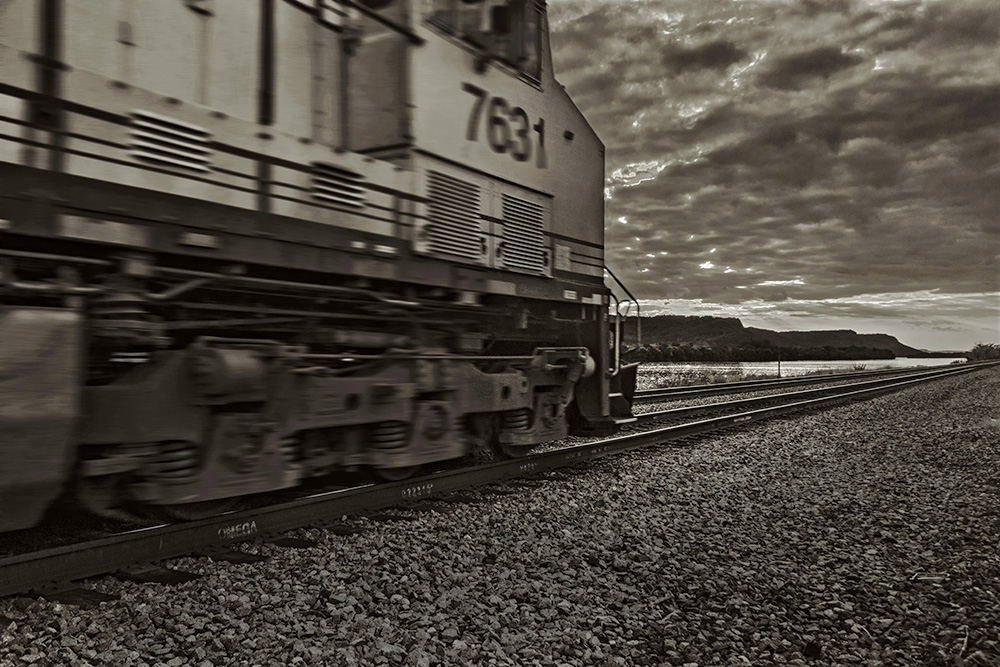 ©David Freese, Freight train along the Mississippi at Trempeleau, WI 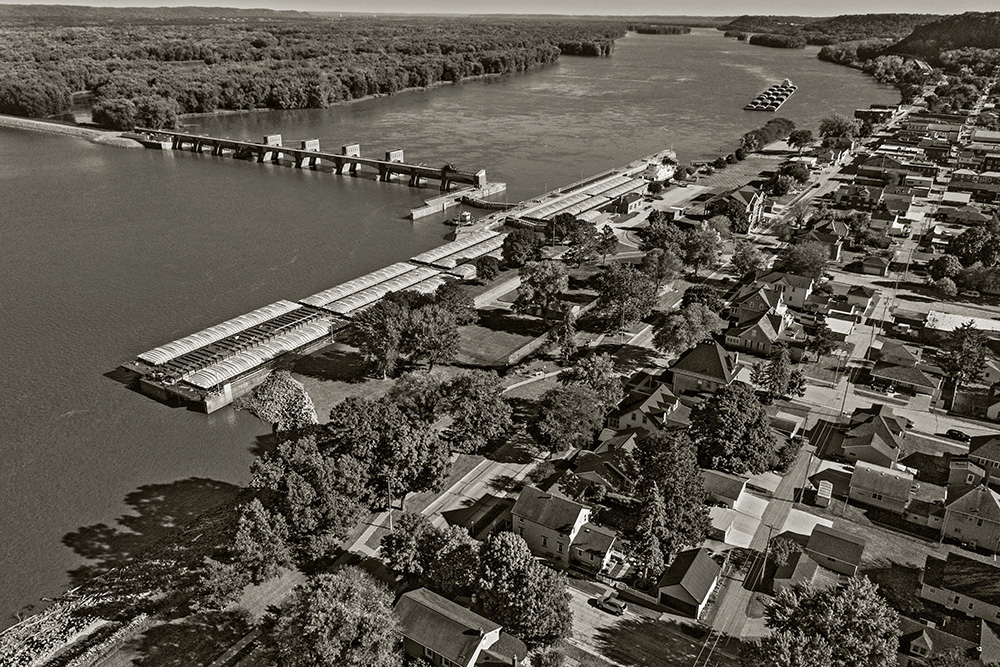 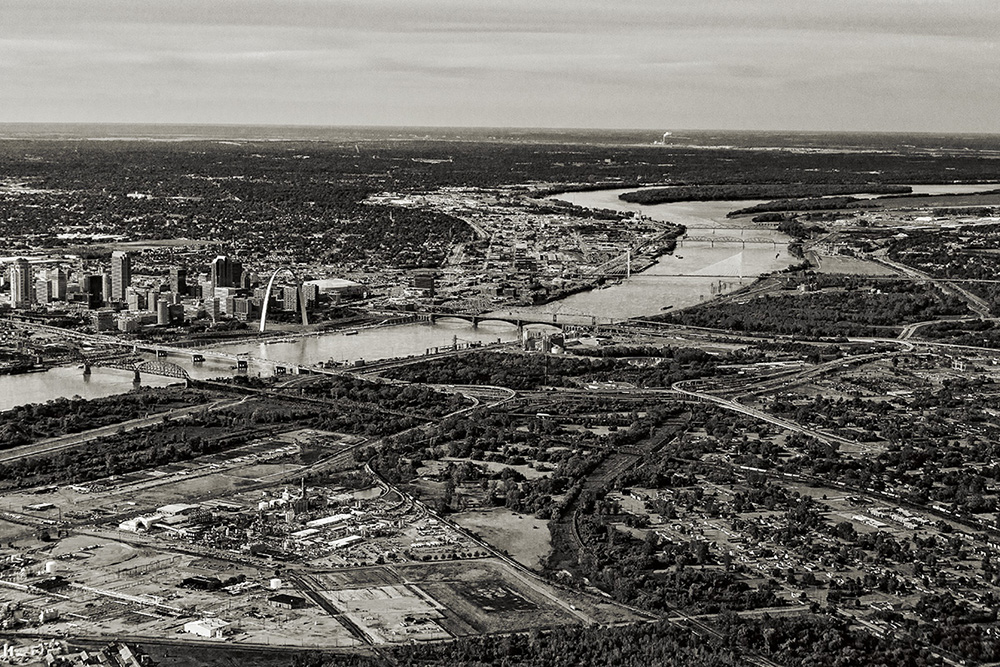 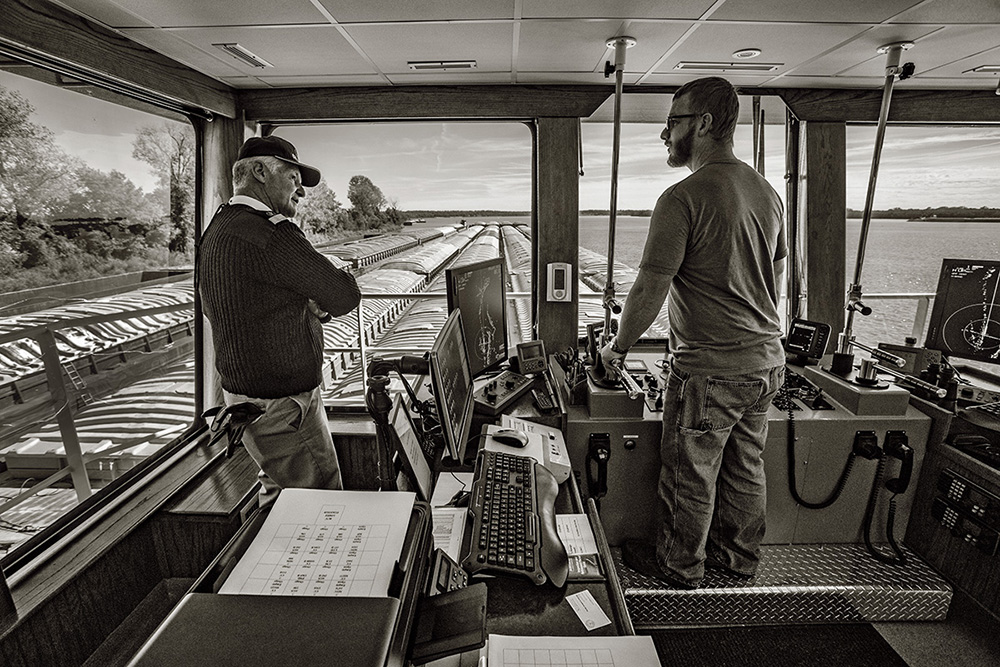 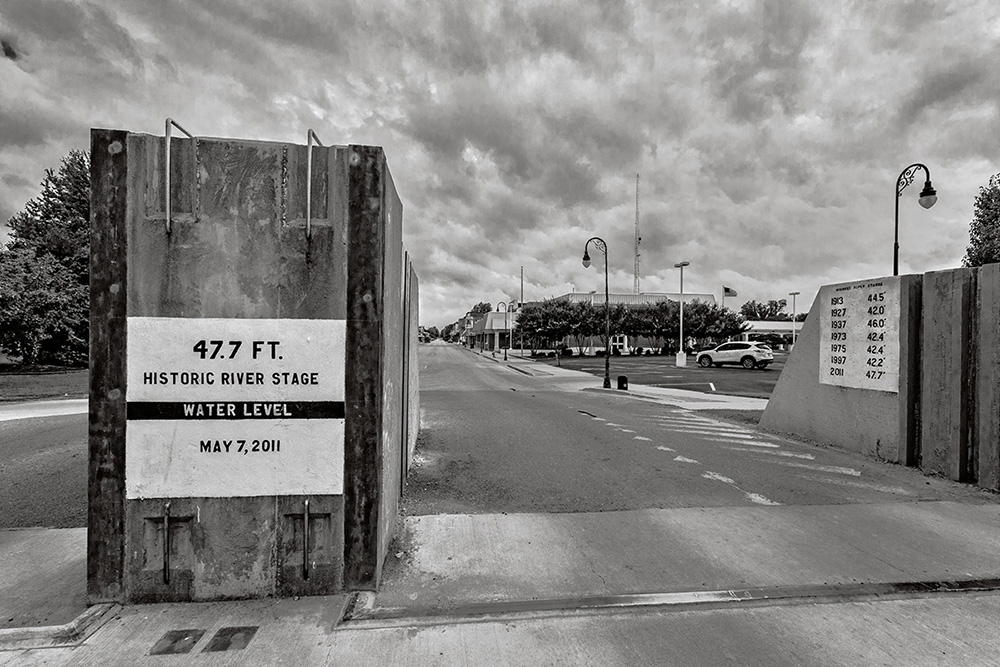 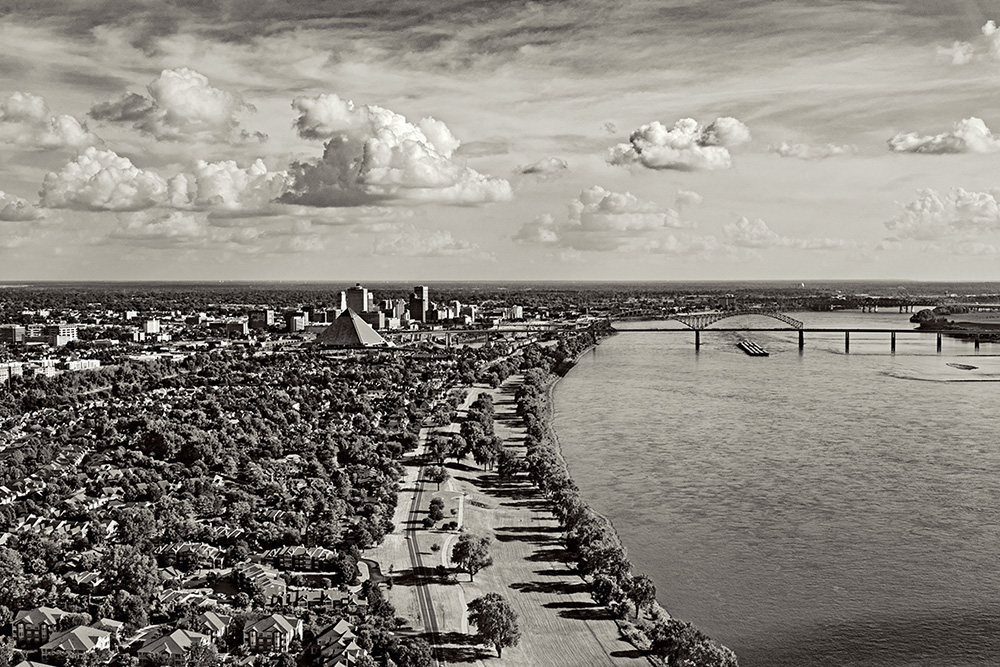 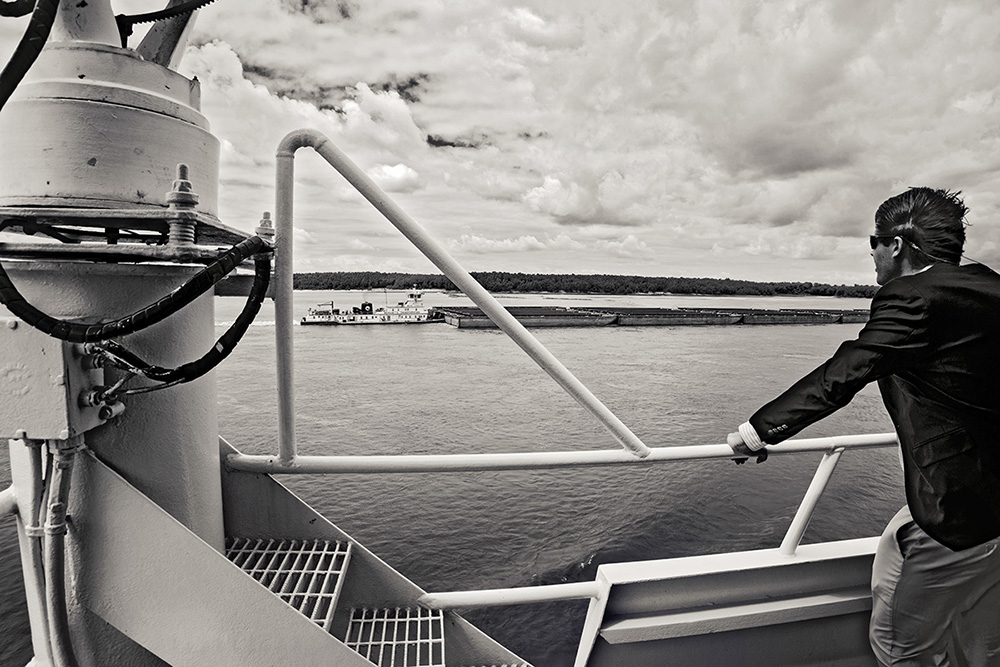 ©David Freese, On board the MV Mississippi, south of Memphis, TN 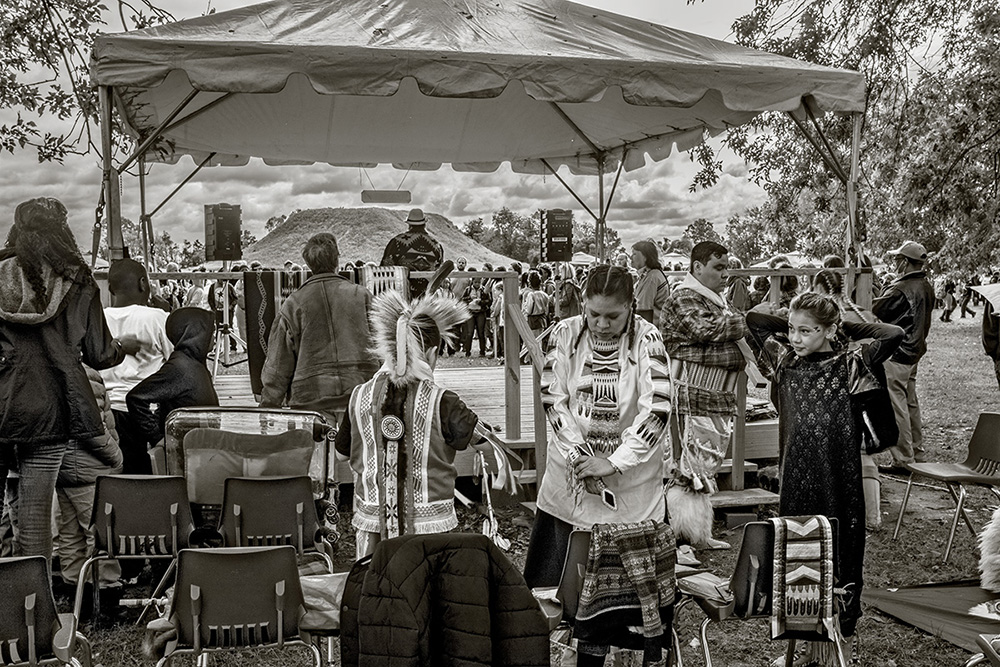 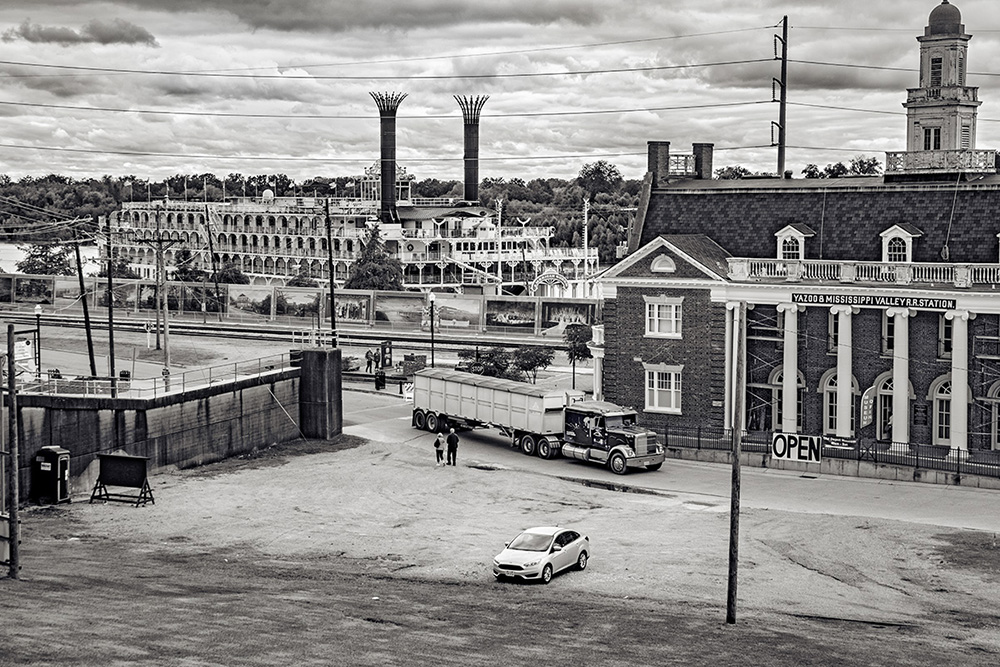 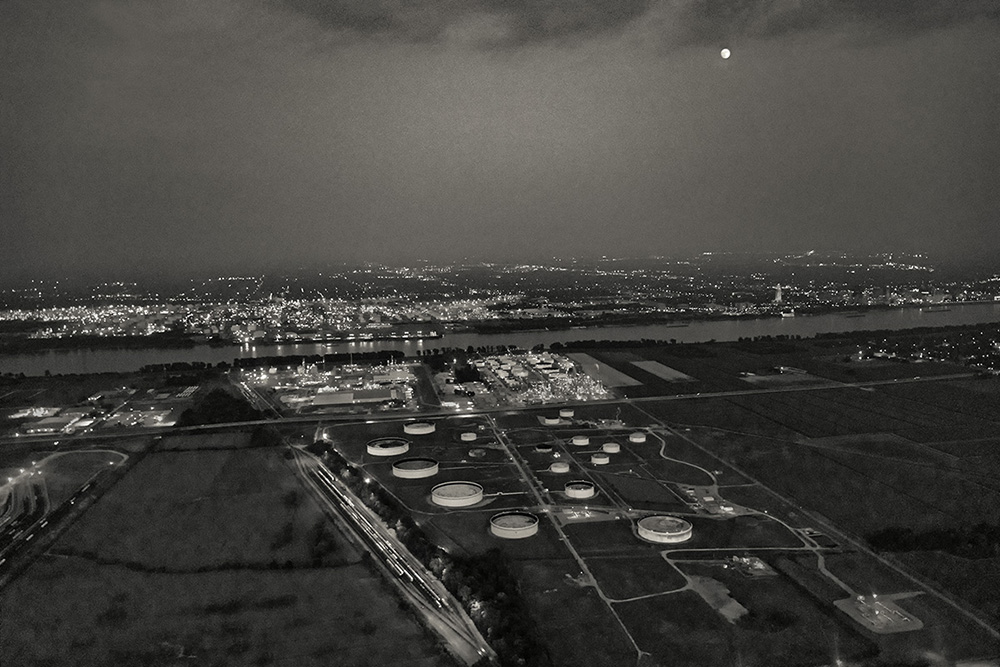 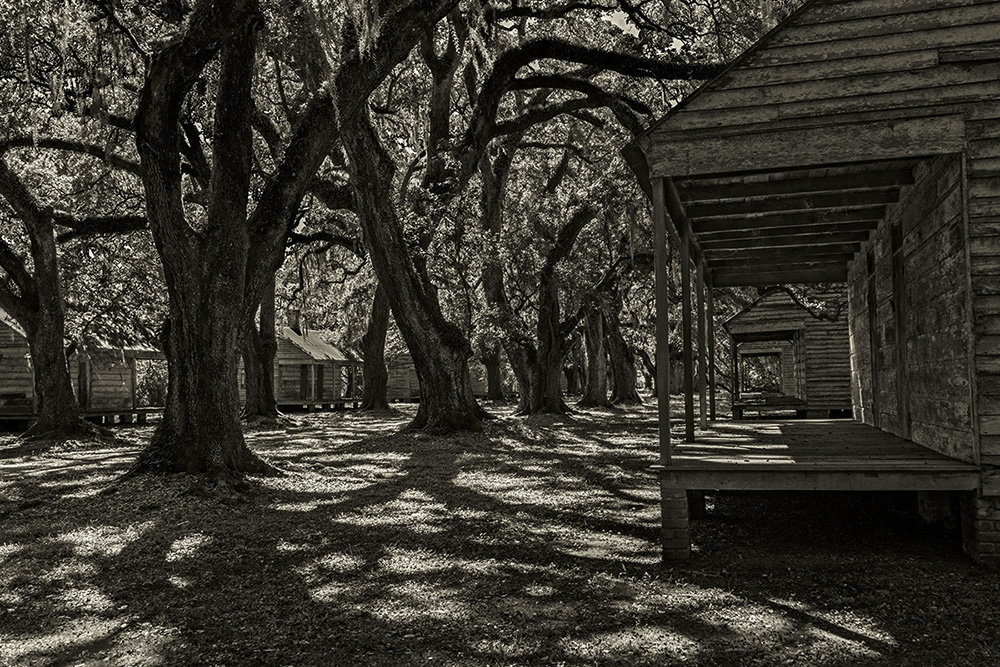 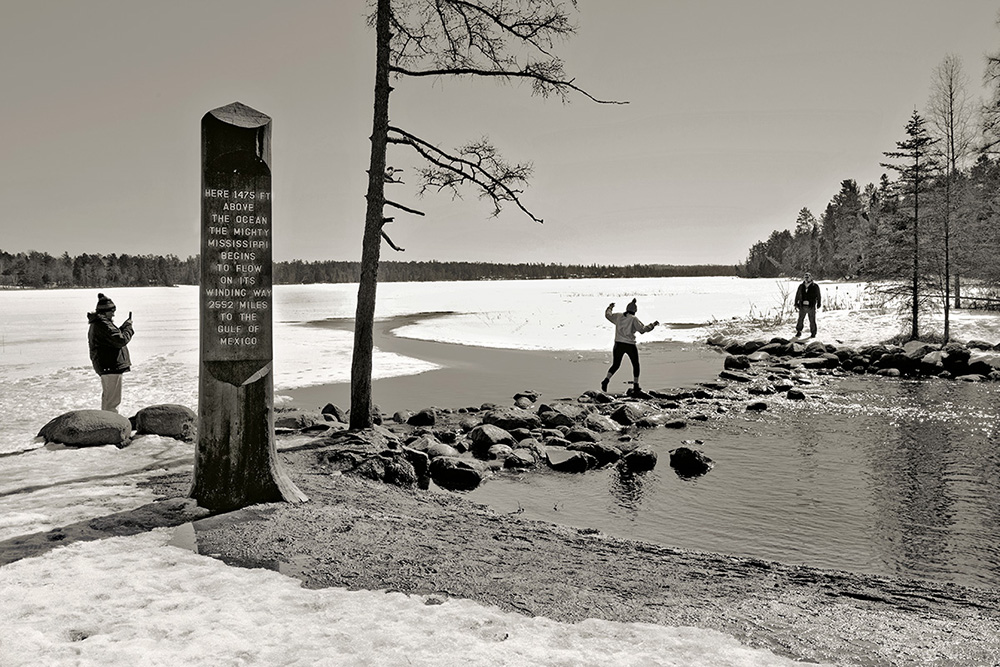