Night photography and Light painting have been growing in popularity, but for photographer Troy Paiva, it’s just been a regular day at the office, and has been for over twenty five years.  Troy’s website receives millions of hits by fans that are drawn to his varied projects and technical skills. His work makes us see ordinary objects in a new way, bringing beauty to the discarded, to the broken and forgotten.
Troy is gearing up for workshops this fall with night photographer and Lightroom guru Joe Reifer in a high desert junkyard north of Los Angeles. “It’s filled with movie prop vehicles, derelict garages and a full blown recycling facility. I rent the place for 3 nights and we really crank out the work. With the classroom stuff during the day and shooting until 2 each night, it’s very immersive. Hardcore.” For more info, go here.
Troy has has also created the books, Light Painted Night Photography: The “Lost American” Technique and “Night Vision: The Art of Urban Exploration” in 2008 (Chronicle Books). Troy’s work has appeared in museums and galleries in New York, Los Angeles, Sweden and San Francisco.  In 2010 and 2011 he appeared as a guest judge on the Singapore reality TV show The Big Shot. He is widely published and interviewed. 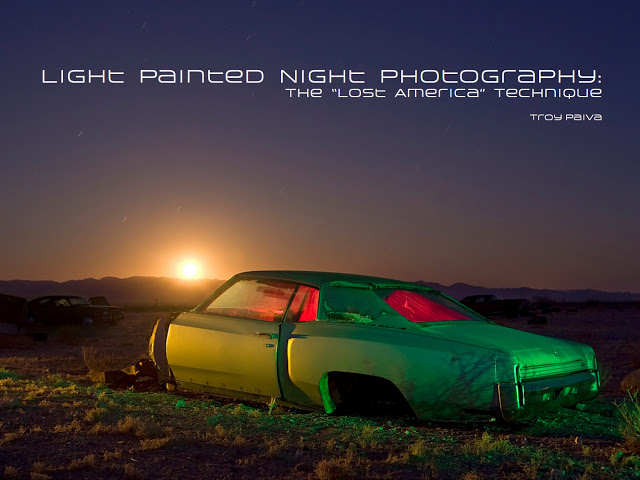 The Mojave Airport Boneyard
Driving across California’s high desert, the airliner boneyard at Mojave airport is visible from miles away.  The long rows of faded tails seem to stretch to the horizon.  Many of the planes are parked in long-term storage, reminders of economic downturns and now defunct airlines, but many more of the worn out, partially cannibalized and obsolete planes will never fly again.  Over the past 30 years, Mojave Airport has become the final resting place for over a thousand of the world’s aircraft. 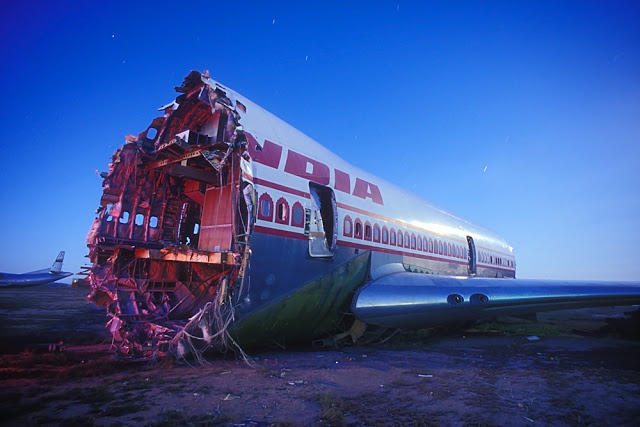 When airliners reach the end of their operational lifetimes (usually about 20 to 25 years) they make their last flight to places like Mojave (or Kingman, Tucson and Marana, Arizona) to be stored and stripped of their parts, keeping more recently manufactured versions of that plane flying.  As entire series of planes are retired, these storage facilities become junkyards.  Scrap companies buy the superseded old airframes and drag them to a remote corner of the airport to chop them up, and melt them down. 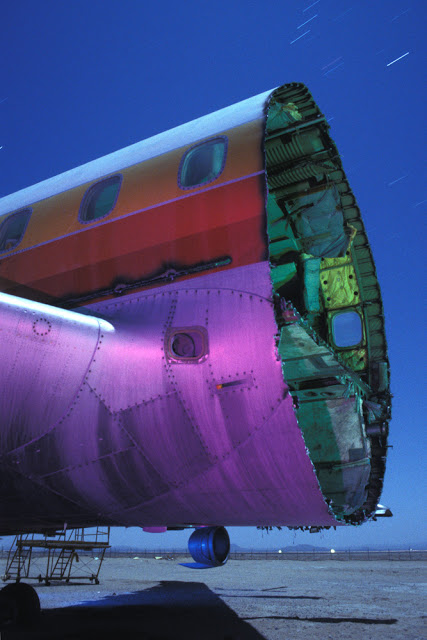 The images in this set were all shot on film in 1990 and a second trip in 2003.  Back in ’90, access was as simple as tracking down the owner’s name and making a request by phone call.  In 2003, after 911, access was considerably more difficult.  Lucky for me, I had made a good contact in 1990 who grudgingly allowed me in one more time.  Today, Mojave Air and Space Port is home to several secretive aerospace R&D facilities and there is no photography allowed anywhere on the flightline side of the airport.  I consider myself very lucky to have been able to shoot this boneyard.  Twice. 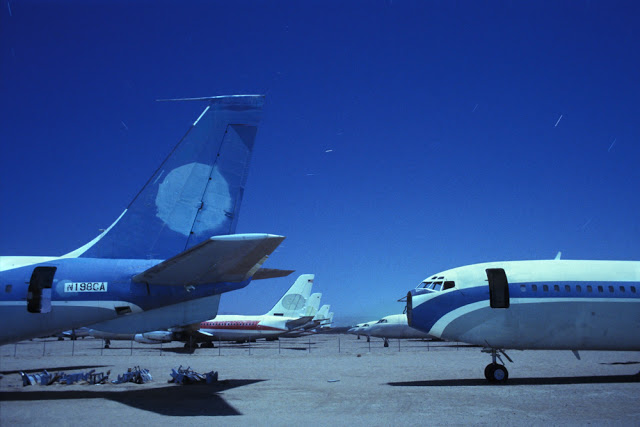 The ghostly atmosphere in this graveyard is palpable–the banging and scraping of doors and control surfaces in the slightest breeze, constant.  These old planes seem to be sighing and groaning as they settle onto their tire rims at the end of the runway, standing as sentinels under the slowly circling stars.  Massive and gleaming in the moonlight, they’re much more imposing when standing on the ground next to them.  The tattered hulks bleeding hydraulic fluid into the sand is a sad sight indeed. 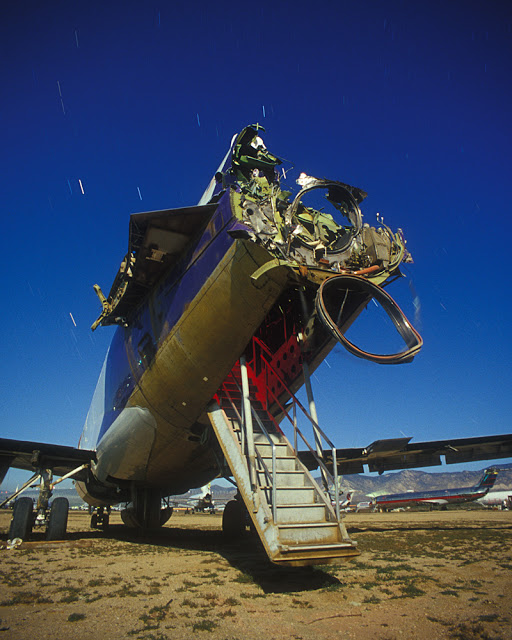 In their day, these planes represented the most sophisticated technology the world had to offer.  They were the shining glory of many nations. Just 100 years ago, they could only have been perceived as pure science fiction.  The thought of casual tourists, sipping champagne as they flew from New York to Los Angeles in a few hours was unimaginable.  Today, these vehicles are garbage.  What will the garbage look like 100 years from now? 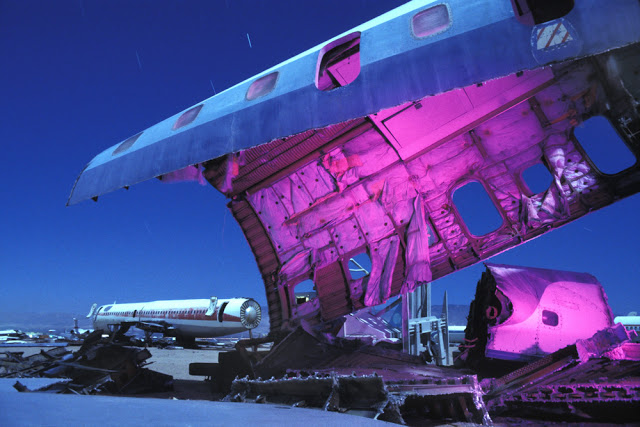 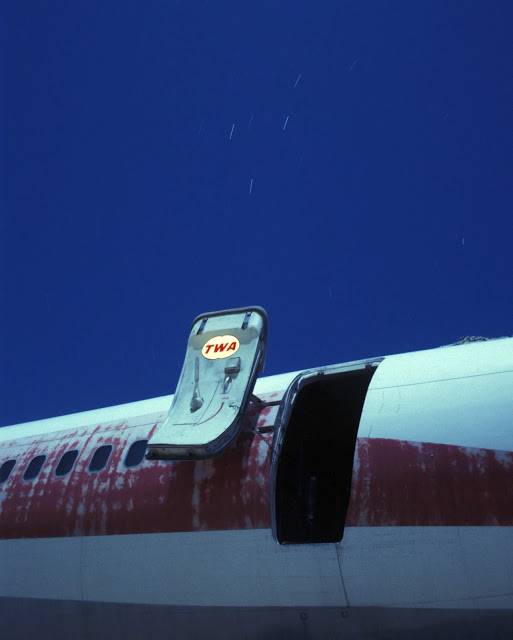 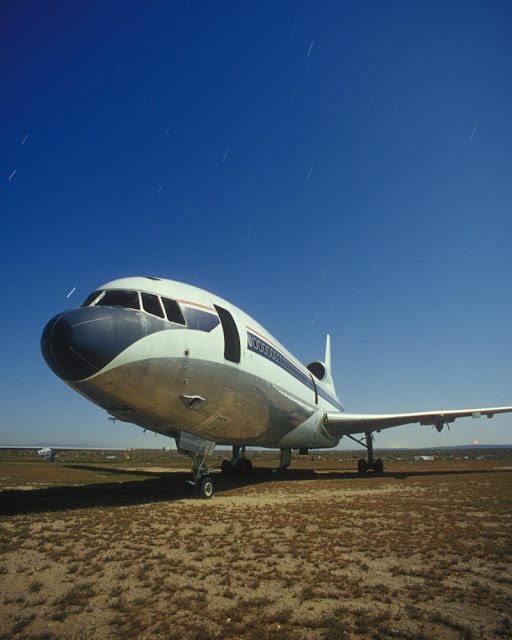 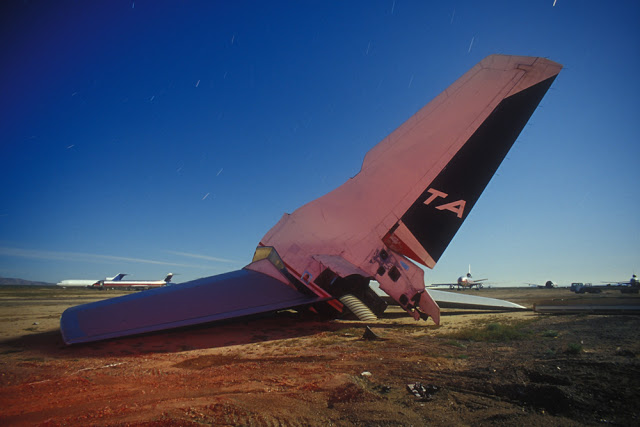 A Night on Highway 58
A single night of shooting along California Highway 58 in November 2010. Starting in Barstow and heading west into Hinkley, Harper Dry Lake and North Edwards, I was dodging storm clouds all night.
When I passed through Barstow in the early evening, I’d planned on grabbing a quick meal and getting to work, but the city’s water had been contaminated that afternoon by perchlorate from one of the nearby military installations.  Perchlorates are used to make rocket fuel and explosives. Residents were told not to drink the water, from every media outlet, over and over again. Every restaurant was closed and stores were running out of bottled water as frantic citizens stocked up. It was a weird, edgy scene, so I skipped dinner and beelined it for the quiet part of town and started shooting. Almost every business on Old 58, along Barstow’s northwestern approach, is closed now, bypassed by a freeway for over 20 years.  Once bustling, it’s now a dark and desolate stretch of road. 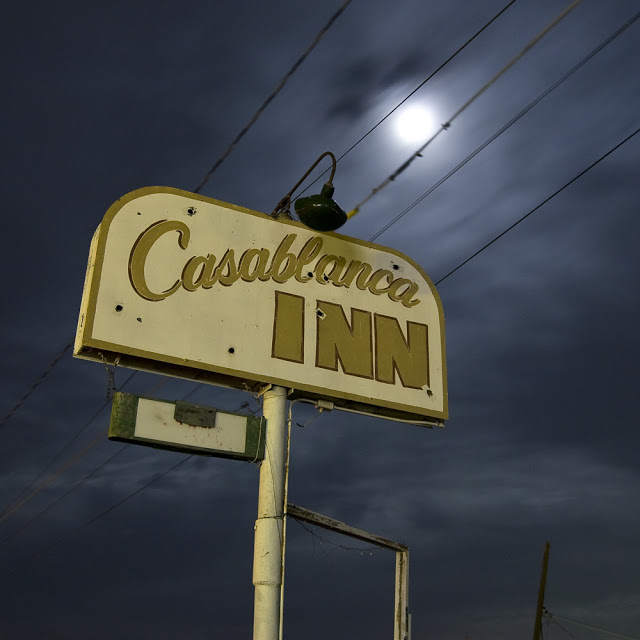 West of Barstow is Hinkley, which has its own long history of water contamination made famous by the movie “Erin Brockovich.” Shooting my way west through town, I slipped through the fence of a huge metal recycling facility.  After getting a few shots off, the owner came home, so I slipped back out through the fence and hit the road again.  The sky was getting too dense to work by moonlight anyway. 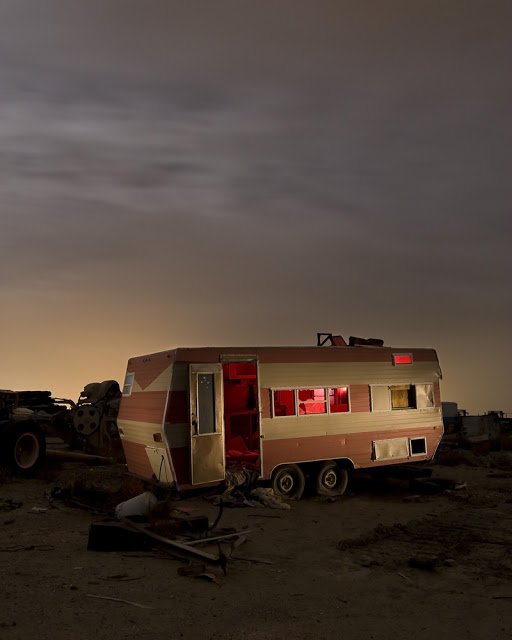 At Harper Dry Lake I wandered 10 miles off the highway and found a couple of abandoned homestead ranches and got shooting, but the sky was closing up on me fast.  I was soon rolling west again, thinking the rest of the night would be scrubbed. 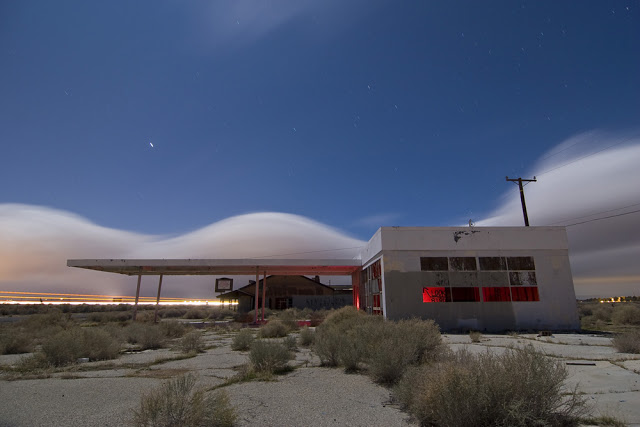 Surprisingly, the sky opened up thirty miles later. I had popped into a circular gap in the clouds–the eye of the storm. I knew I had to shoot something, and quickly.  It was obvious I only had a short time before it closed in again from the west.  Remembering the North Edwards exit had an abandoned gas station and a few other derelict buildings, I impulsively hopped off the freeway there, set up in the howling wind and got to work. 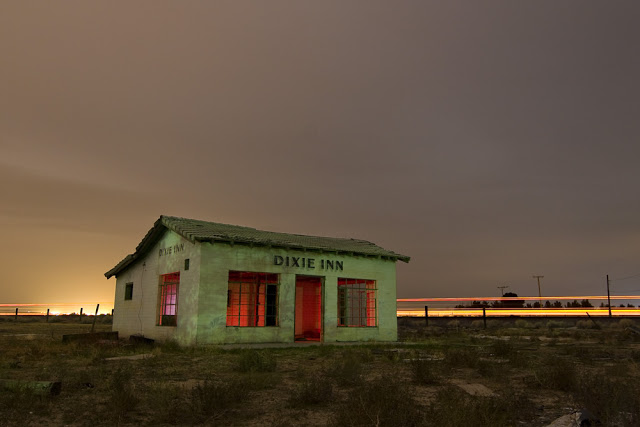 Methodically, I pounded out a series of short exposures as the arms of the storm enfolded themselves around me. In less than 30 minutes the circle of clouds closed over me and the moon flickered out.  The sky went dark, like flipping a light switch.  It was time to jump in the car for the 6 hour cruise home, in a driving rainstorm. I pulled into the driveway at 5:30 AM and had a glass of cool, clean water before I fell asleep. 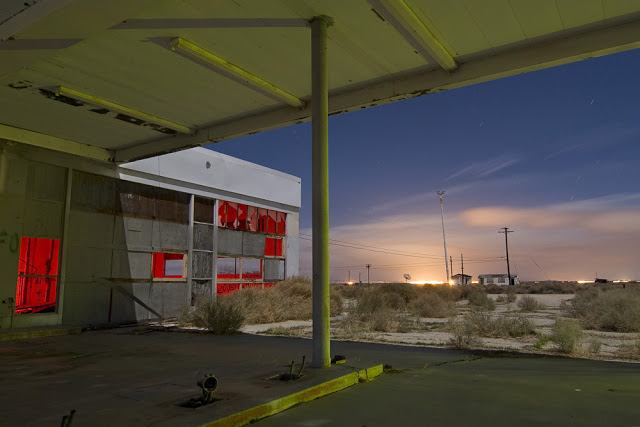 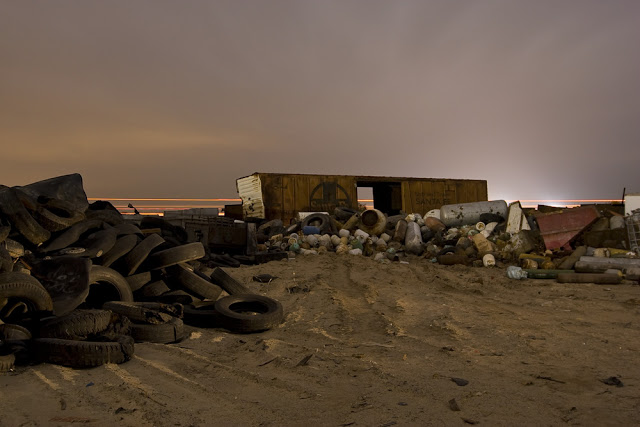 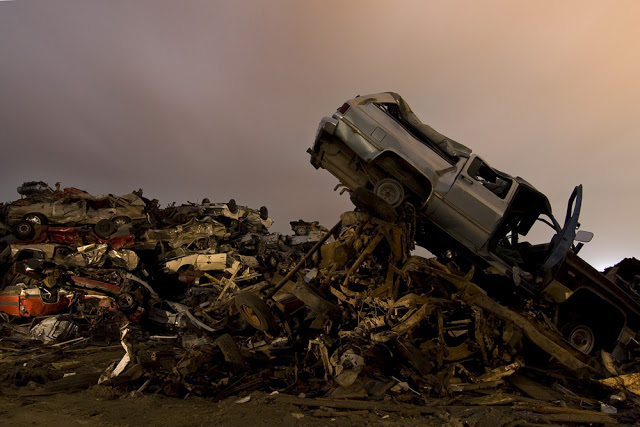 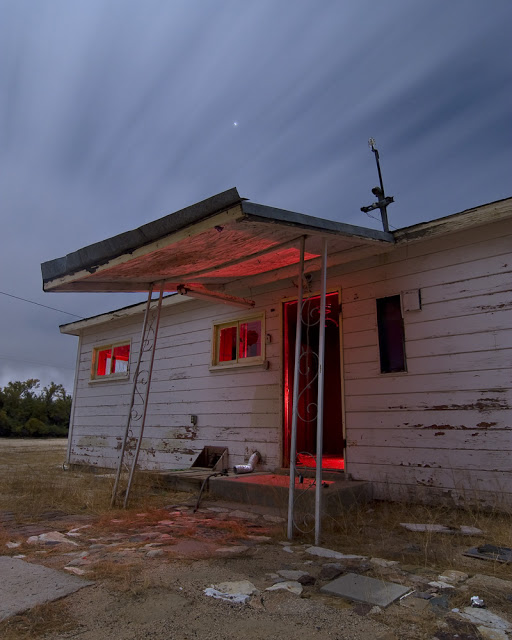