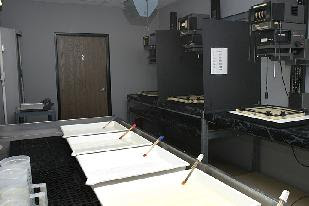 Two years ago, when the owner of our local community darkroom decided, in a split second, to close the facility, he sent a 10 year community into a tail spin. Not only were we losing our place of work, but a world of friends and compatriots. I met so many wonderful photographers in that darkroom, including those behind the counter, that have become significant friends.

I was able to find another darkroom, Translight Photography Center, which is a longer drive, but a lovely facility. Recently, the owner was also ready to shut down (and this is one of the last public darkrooms in this huge city of Los Angeles), until one of the photographers stepped in, bought the place, putting his own money on the line to help out the photo community. That’s not insignificant in these financially troubled times…and we are not out of the woods. We still need to reinvigorate and support the working darkroom (this darkroom has B and W, color, a huge 9800 printer, and new scanner), as I now realize that it’s not just about making prints, but about creating community.

With that said, I wanted to say thank you to two individuals, Michael Gotz, photographer and owner, and Christine Caldwell, photographer and manager, who work tirelessly to make this Translight Photography Center into a terrific facility. And by the way, if you live in Los Angeles, and don’t know how to print b and w or color, they give privates at very reasonable rates! Christine’s work is featured below.