The Tenement Museum by Aline SmithsonAugust 8, 2010

I recently received an e-mail from the Tenement Museum in New York City about their new online database of over 1,300 images from the museum’s collection. This was a timely e-mail as I’d just returned to LA from apartment hunting in New York City’s lower east side (Lowaesida), and as I trudged up 5 or 6 flights of stairs in the pouring, hot rain, with air that held in every fart, every whiff of rotting trash and body odor to look at apartments filled with layers of mold, pizza boxes, and dirty laundry, I started thinking about the generations of immigrants that had walked the same stairs in the same buildings, and how this was a community of beginnings.

About the image database:
As part of its commitment to education, the Museum made the accessibility of these images a priority and began the process of digitizing its photographic collection four years ago. For the first time, researchers from around the world can access the photographic archive online, making our historic resources available to a wider audience. This resource will be useful for lower and upper school teachers, as well as researchers, scholars, visitors, members of the media, and laypeople with an interest in photography, history, immigration or the Lower East Side.
Notable collections within the database include:
– Photographs of former 97 Orchard Street residents and their descendents, 1860s-2000s. Families whose stories are told on Museum tours are represented, as well as many others.
– The last days at Sidney Undergarment Co., a photo essay taken on closing day of this business at 97 Orchard Street, 1979
– The WPA photographs of Arnold Eagle, taken on the Lower East Side in the 1930s and early 1940s.
– Lower East Side images taken by photographer Donald Sheppard in the 1940s.
– Edmund Gillon’s photographs of Lower East Side street scenes during the 1970s
– Images of the Tenement Museum’s restored apartments, as well as the building pre- and during restoration, from 1988 to the present day

This project is made possible, in part, by by the David Berg Foundation and the National Trust for Historic Preservation’s Historic Sites Fund. 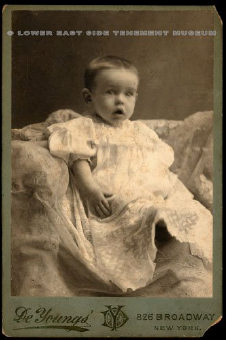 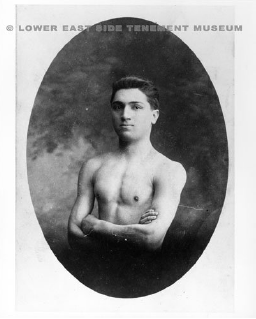 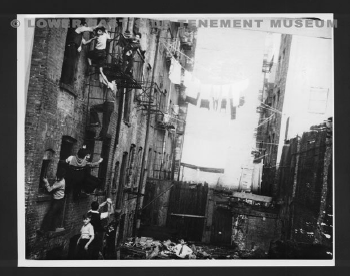 FPA0901.45. Collection of the Lower East Side Tenement Museum © 2010
Jacqueline Richter, who was born in 97 Orchard Street, posing at the fence of her house in New Jersey, where she lived with her husband and children. 1955. 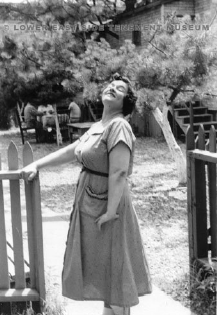 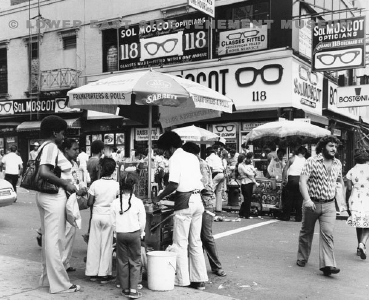 About the Tenement Museum
The Lower East Side Tenement Museum, founded in 1988, is located in a landmarked tenement building at 97 Orchard Street. The building was home to more than 7,000 immigrants from more than 20 nations between 1863 and 1935. Anchored in a neighborhood that has long been home to thousands of poor and working class people, the Tenement Museum is dedicated to using the history of its site as a tool for addressing issues that are still pressing today, including immigration, urban housing and public welfare. In 2008 the Museum was honored with the Preserve America Presidential Award and the National Medal for Museum Service.