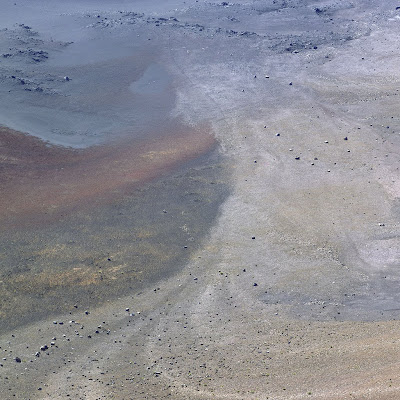 Photographer and astronomer, Stephen Strom, looks at our planet with a unique vision. New York born, Stephen received his Masters and Ph.D. in Astronomy from Harvard University, and had an long and prestigious career beginning as Lecturer in Astronomy at Harvard and Astrophysicist at the Smithsonian Astrophysical Observatory, and continuing on as Chairman of the Five College Astronomy Department at University of Massachusetts in Amherst, MA. In 1998 Stephen moved to Tucson as a member of the scientific staff at the National Optical Astronomy Observatory where he carried out research directed at understanding the formation of stars and planetary systems.

For over three decades, Stephen has been an engaged photographer, has exhibited widely, and created a monograph Earth Forms through Dewi Lewis Publishing. His work is currently included in the January, 2011 issue of Color Magazine, and a large portfolio and an interview can be found in Lenswork 89 and Lenswork Extended. 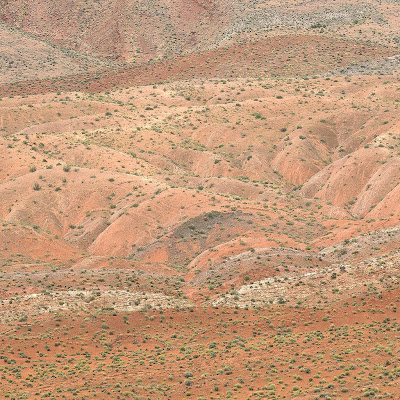 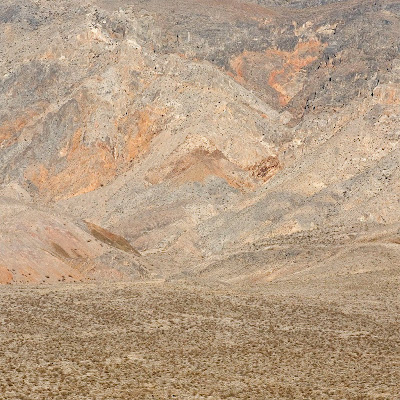 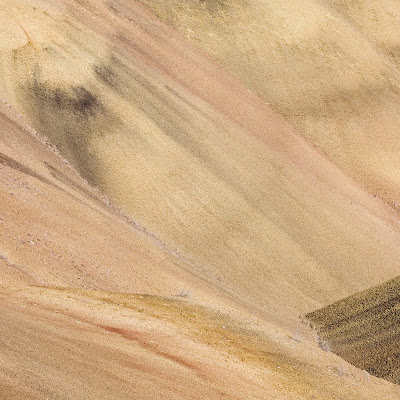 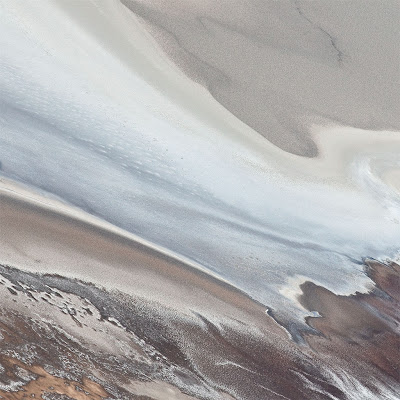 The images from his Earth Forms Project provide a wonderful way to look at nature’s paint box. His new series, Earth and Space, is a portfolio of diptychs that combine Stephen’s landscape interpretations with images taken by NASA and ESA planetary probes. Be sure to click on the images to see them larger.

I have spent most of my professional life as an astronomer, searching out patterns encoded in the light from distant stars in the hope of understanding how our sun and solar system came to be. Over the past four decades, I have spent countless hours perched on remote mountaintops, looking upward mostly, but also contemplating the desert below. During those times, I became drawn to, then seduced by the changing patterns of desert lands sculpted by the glancing light of the rising and setting sun: light that reveals forms molded both by millennial forces and yesterday’s cloudburst into undulations of shapes and colors. In response, I began what has become a 30-year long devotion to capturing in images those remarkable patterns and the rich history they encode. 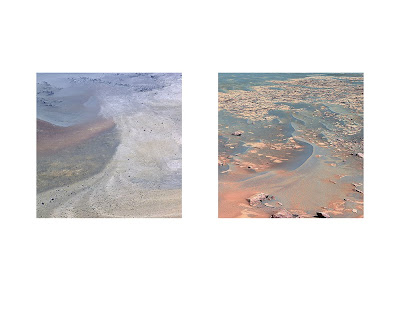 These earth-based images find resonance in the remarkable photographs produced by planetary probes launched over the past decades by NASA and its European counterpart, ESA. Tens of thousands of these images are available in digital form in public domain archives, which, as an experiment, I decided to examine from the perspective of an artist rather than an
astronomer. In doing so, I tried to imagine myself standing on the surface of Mars, or on a high Martian mountain and searching for patterns which evoke the same powerful emotional response as a desert landscape. 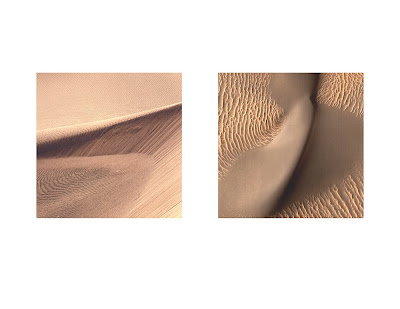 Hence these diptychs: combinations of landscapes and Mars-scapes that capture patterns that reveal both sculptural and chromatic rhythms, and, on another level, commonality of physical forces, often acting on vastly different spatial and temporal scales. 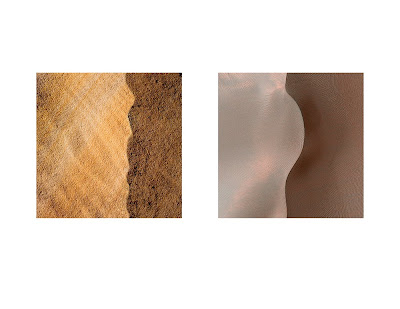 The pairings invite the viewer to contemplate the power of photograph and viewpoint to reveal the multi-level beauty of two worlds. What I hope to evoke is what the late essayist Ellen Meloy described as a “geography of infinite cycles, of stolid pulses of emergence and subsidence, which, in terms geologic and human, is the story of the earth [and Mars] itself.” 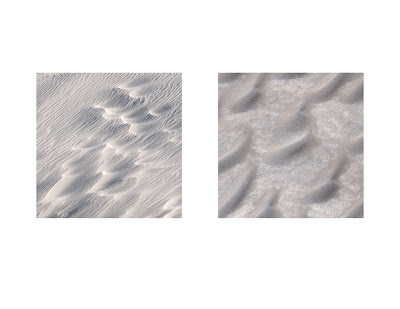 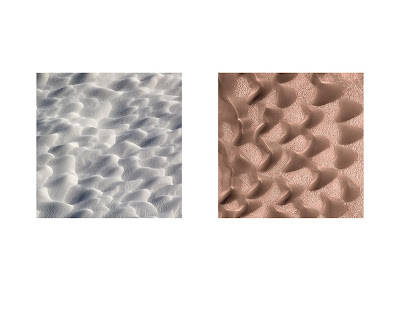 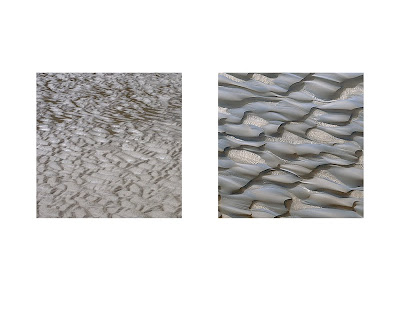 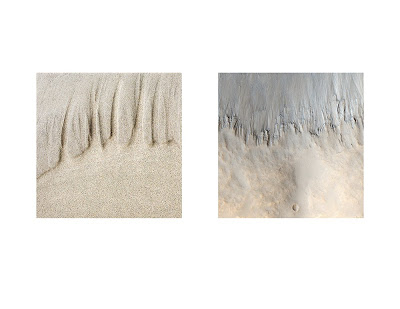 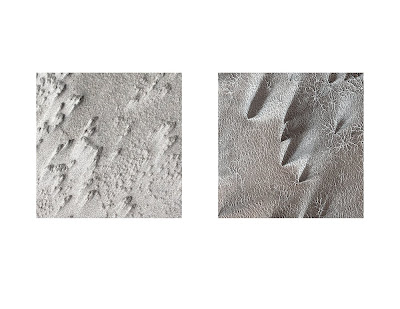 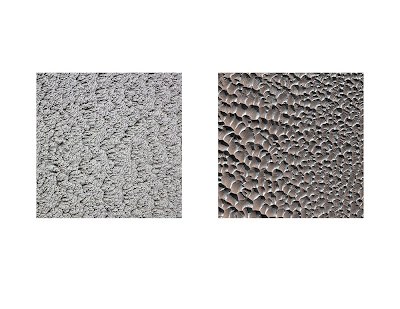 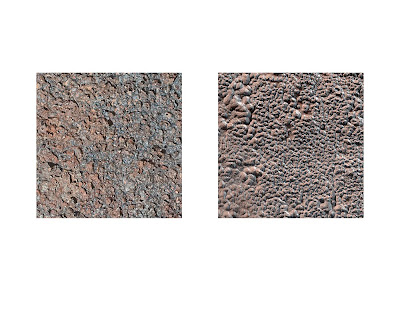 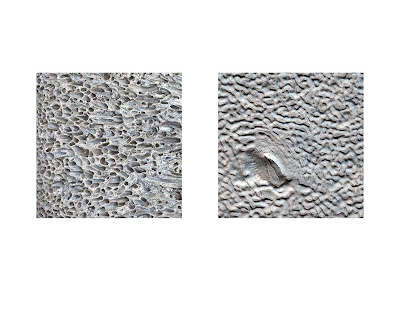 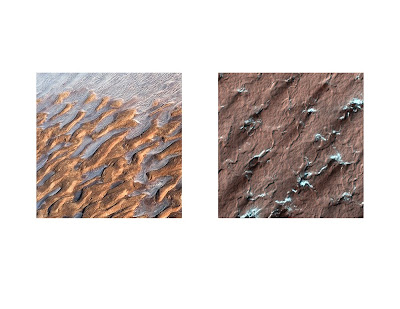 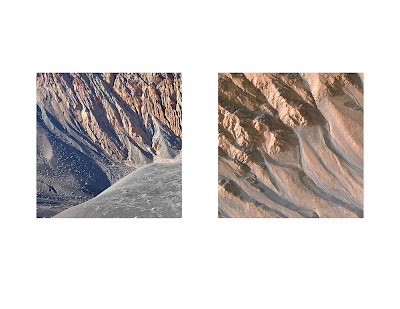 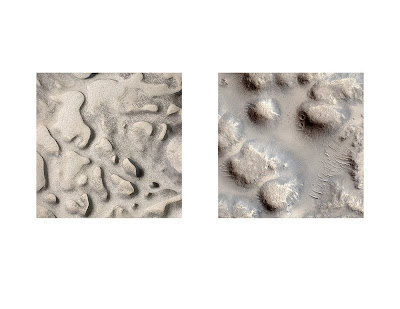