Swiss photographer, David Favrod, is the 2013 Project Launch Winner in CENTER’s Awards program.  The prizes include a $10,000 cash award, and exhibition at the Center for Contemporary Arts, complimentary participation in Review Santa Fe, A workshop at the Santa Fe Photographic Workshops, a Photographer’s Showcase through Photo-Eye, an invitation to participate in the Art Photo Index, a portfolio review through the Eyeist, an online exhibition at VisitCenter, and today’s feature on Lenscratch.

David was born in Kobe, Japan, and now lives and works in Switzerland and Spain. He received a Master’s Degree in Art Direction and a Bachelor’s in photography from the Ecole cantonale d’art de Lausanne. David’s work has been well celebrated, winning the Aperture Portfolio Prize in 2010, the Work in Progress Award at Les recontres del la Photographie in Arles, France in 2009, and shortlisted for the FOAM Paul Huf Award, 2012, in Amsterdam. He has had solo and group exhibitions around the globe and his work is held in numerous public and private collections. He recently opened They are More Things at the EXP12 Gallery in Berlin, Germany that runs through May 5th.

GAIJIN: Gaijin is a japanese word meaning “the foreigner”
«For a Swiss, I am a Japanese and for a Japanese I am a Swiss or rather a gaijin.»
My name is David “Takashi” Favrod. I was born on the 2nd of July 1982 in Kobe, Japan, of a Japanese mother and a Swiss father. When I was 6 months old, my parents decided to come and live in Switzerland, more precisely in Vionnaz, a little village in lower Valais. As my father had to travel for his work a lot, I was mainly brought up by my mother who taught me her principles and her culture.
When I was 18, I asked for double nationality at the Japanese embassy, but they refused, because it is only given to Japanese women who wish to obtain their husband’s nationality.
It is from this feeling of rejection and also from a desire to prove that I am as Japanese as I am Swiss that this work was created. “Gaijin” is a fictional narrative, a tool for my quest for identity, where self-portraits imply an intimate and solitary relationship that I have with myself. The mirror image is frozen in a figurative alter ego that serves as an anchor point.
The aim of this work is to create “my own Japan”, in Switzerland, from memories of my journeys when I was small, my mother’s stories, popular and traditional culture and my grandparents war narratives. 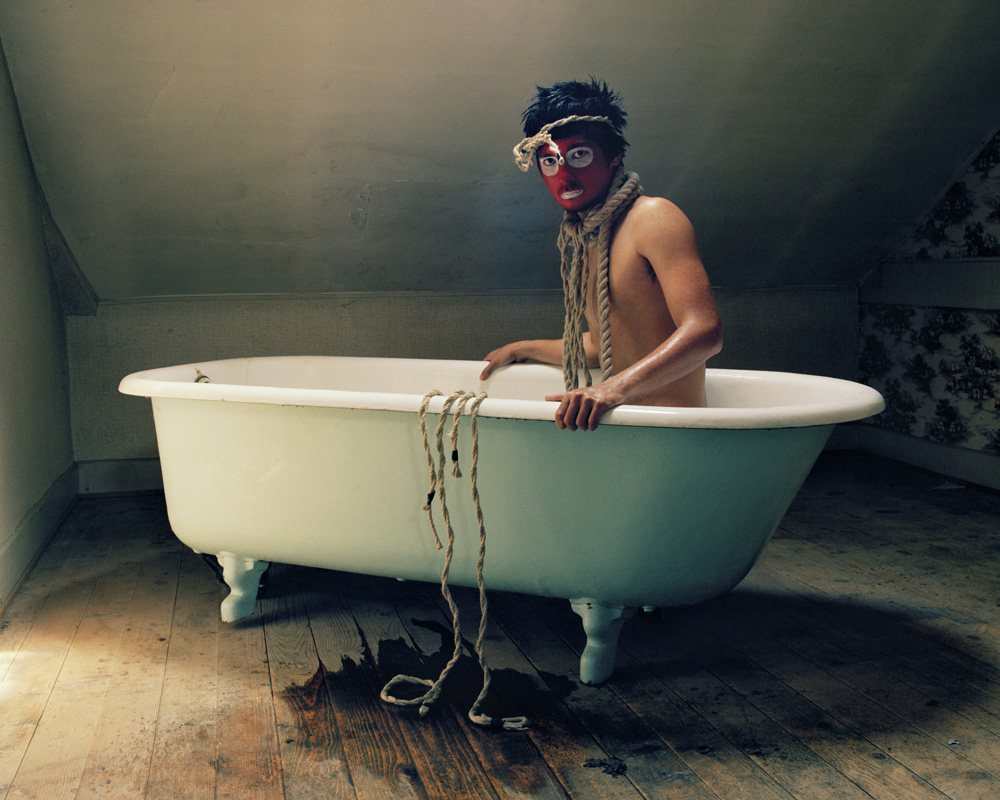 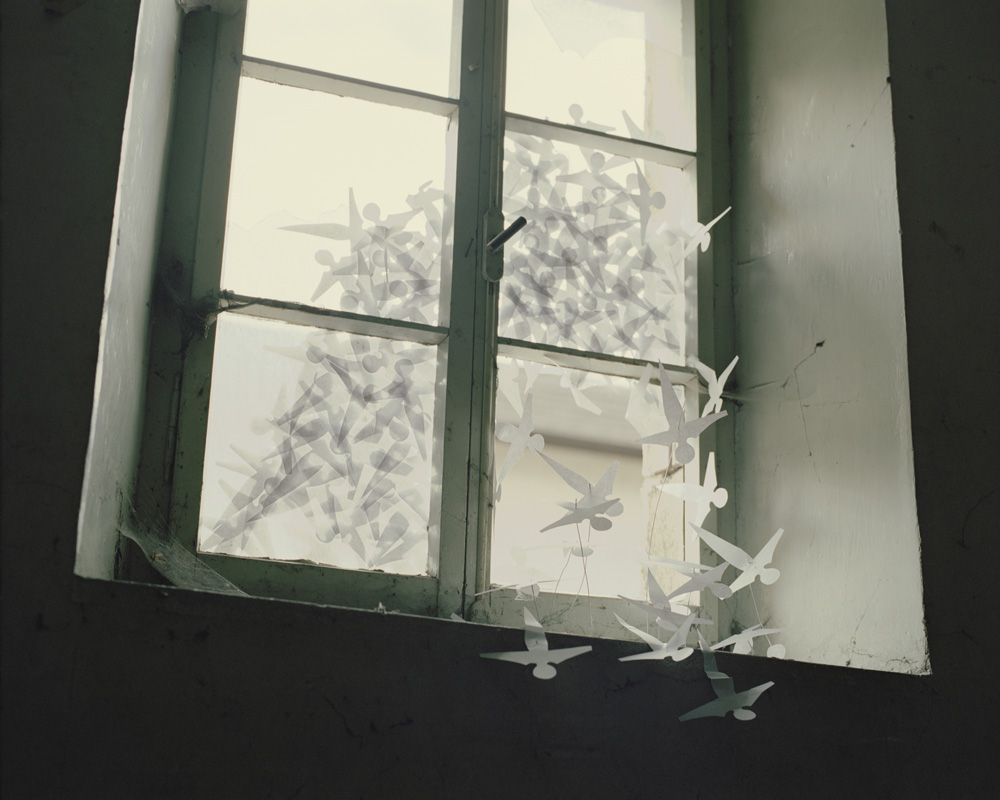 The image of the window with the paper birds is about the woman Sadako who at her home close to Ground Zero when the atom bomb was dropped in Hiroshima in 1945. Years later, she developed leukemia and was hospitalized in 1955 and given a year to live. She died in 1955 aged 12. During a hospital visit Sadako’s best friend folds an origami crane as an old Japanese story says that who folds 1,000 origami cranes will be granted a wish by a crane. As Sadako didn’t manage to fold all 1,000 cranes, her friends folded the remaining ones and buried them with her. With this image I want to speak about the war, the memory and the atomic bomb. 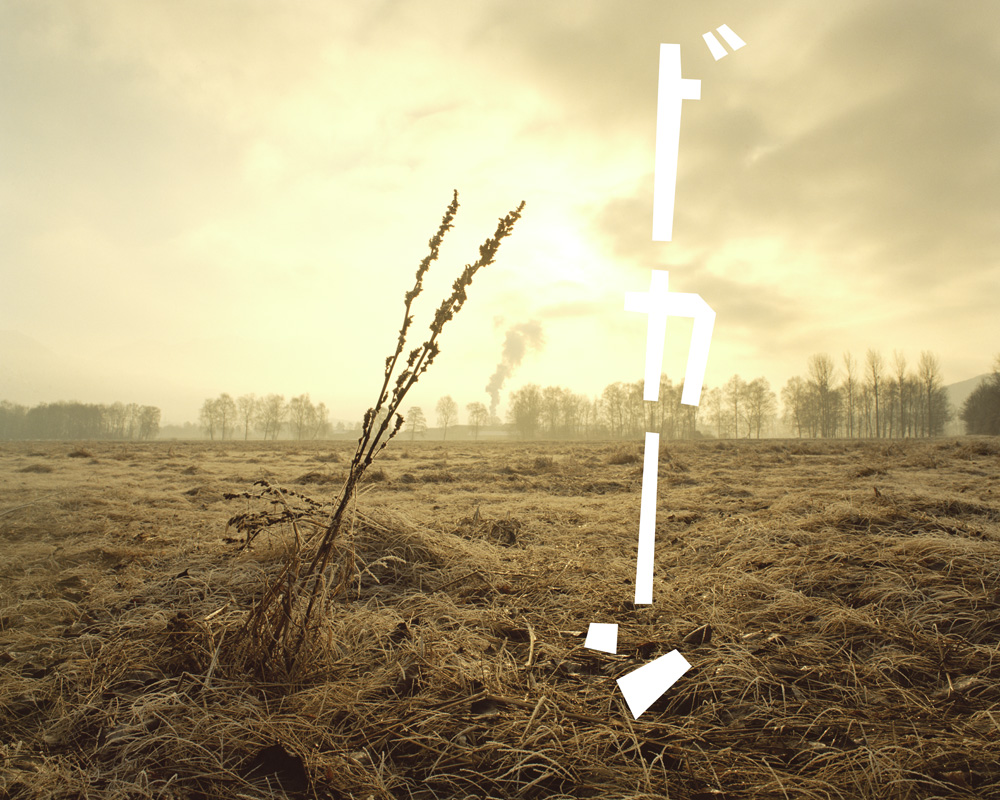 The sound is a very important part of the war memories of my grandparents (the explosions, the holings, the sound of the B-29,…) Baoummm is the onomatopoeia of an explosion. The onomatopoeias are painted on the print. 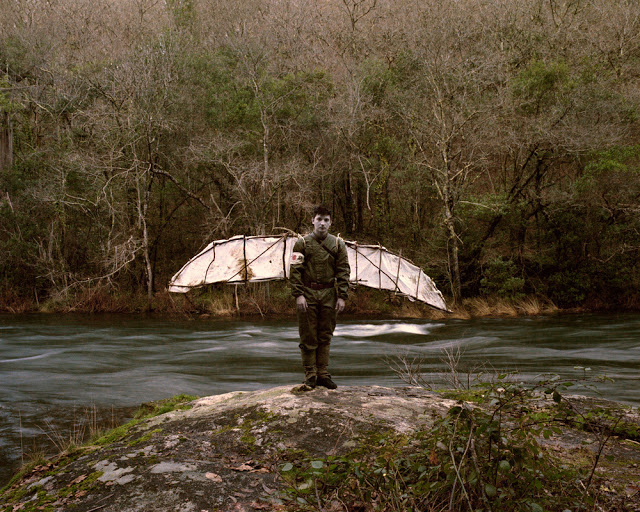 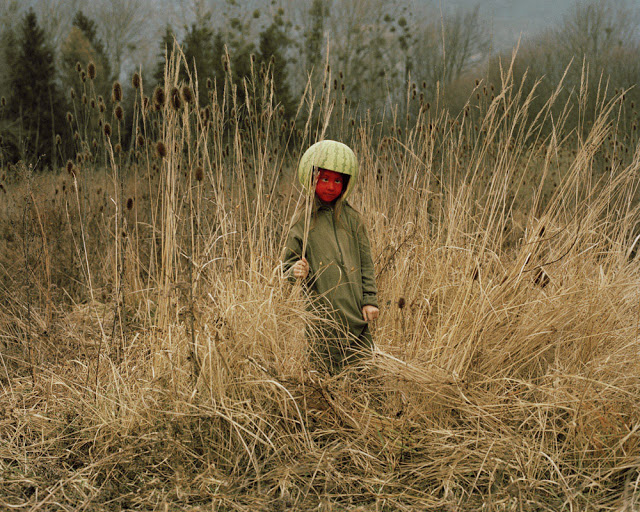 Mishiko was the sister of my grandfather. She fell ill during the second war, doctors diagnosed him a poor hydration. In Japan, watermelon is a fruit very popular and holds much water. So his parents gave him regularly. But the diagnosis was wrong and it was a salt deficiency and she died shortly after. 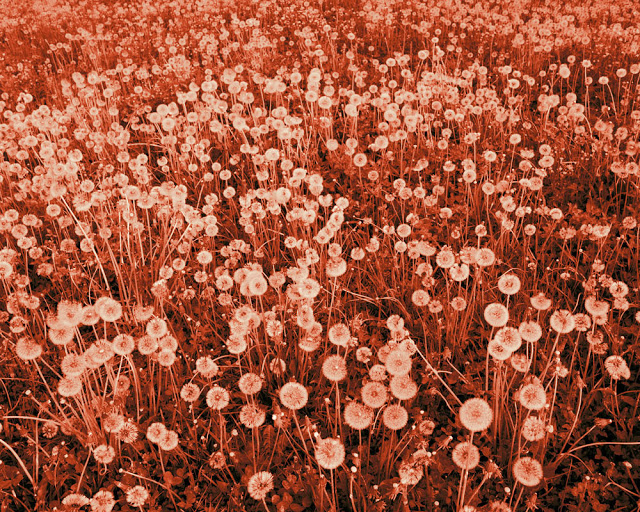 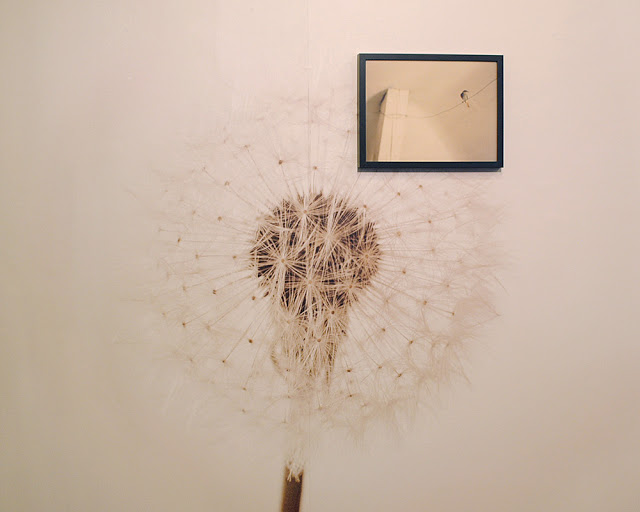 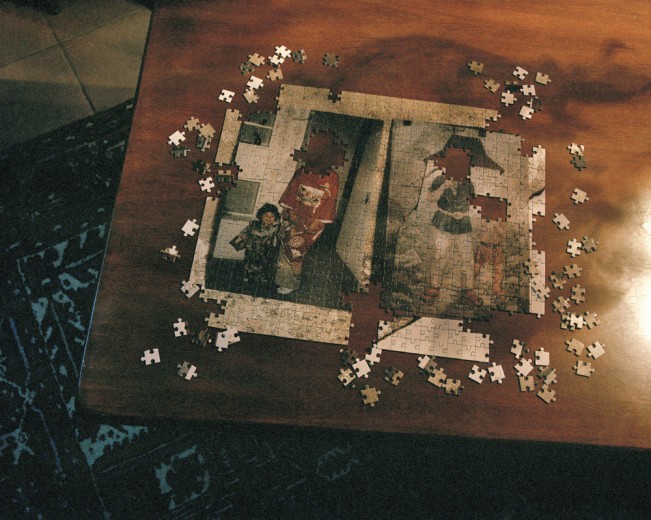 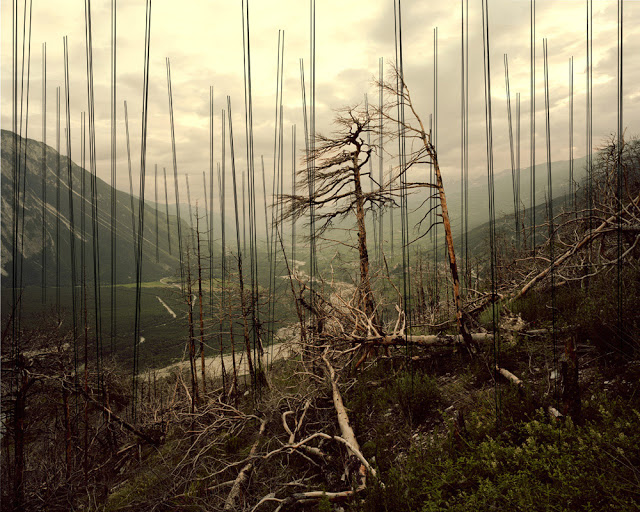 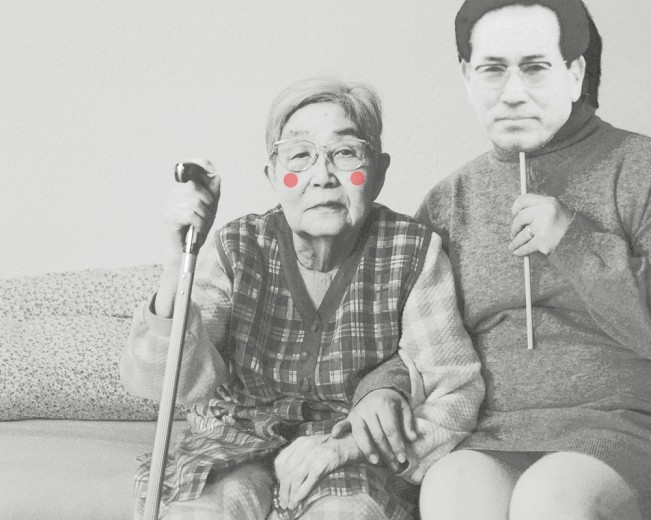 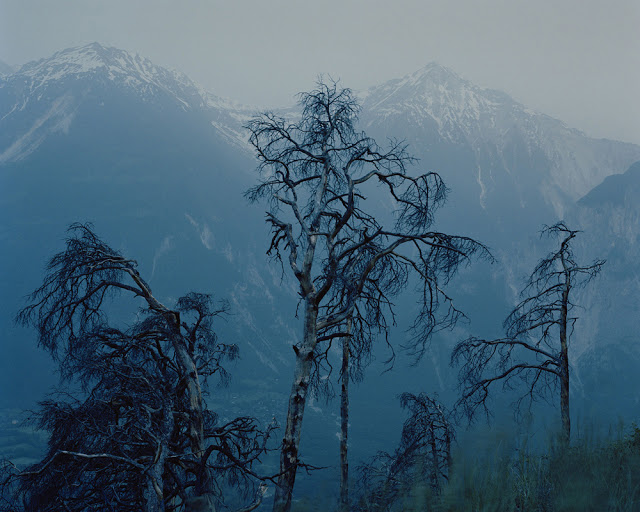 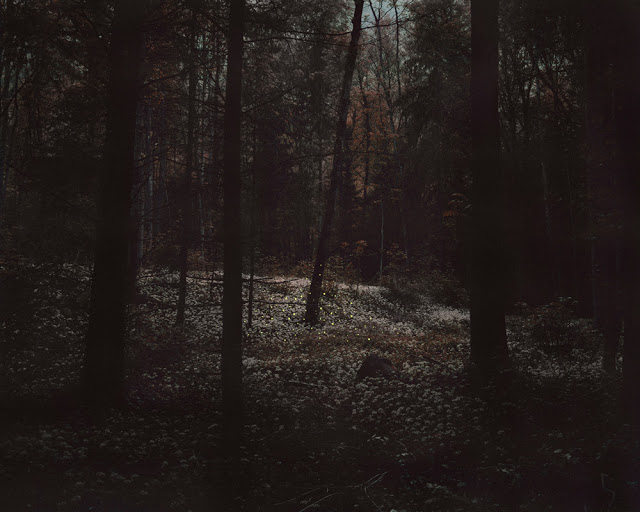 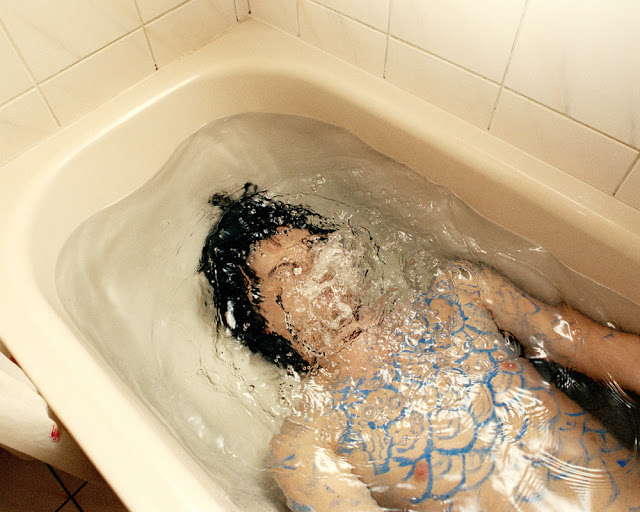 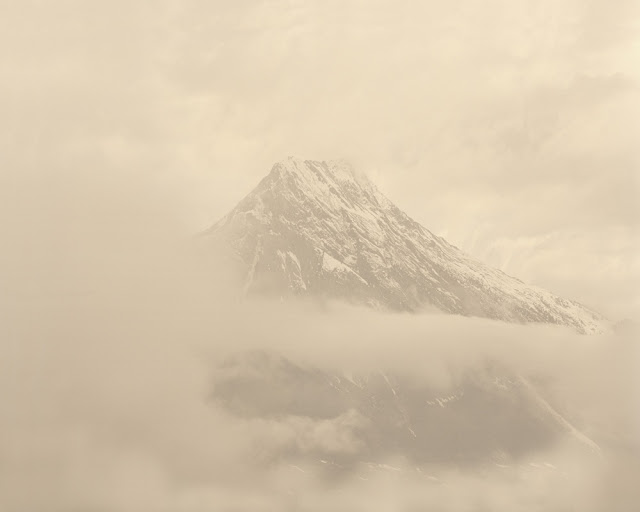 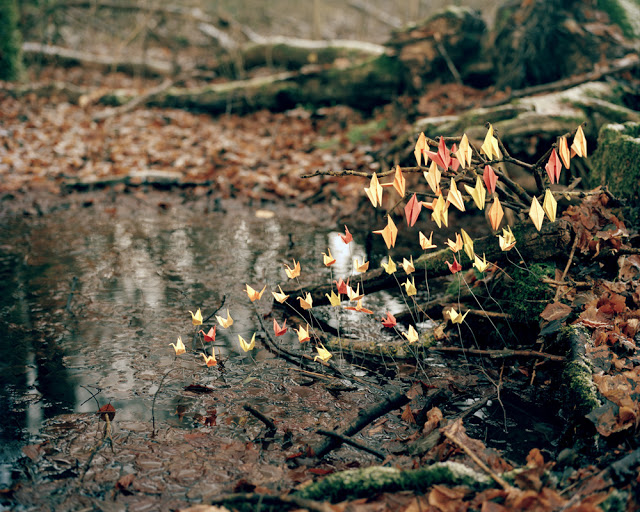 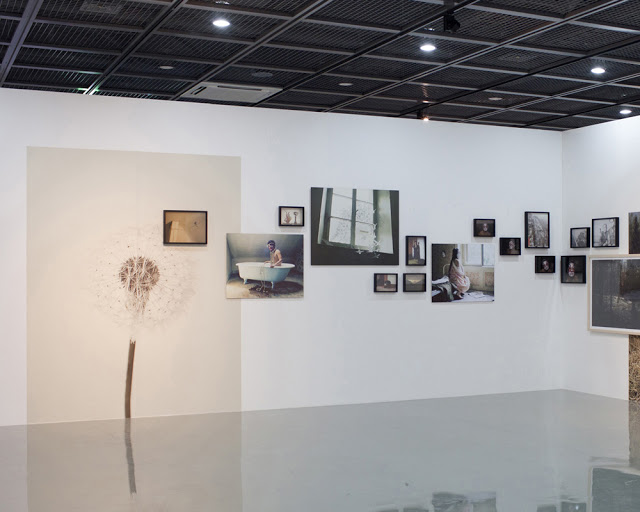 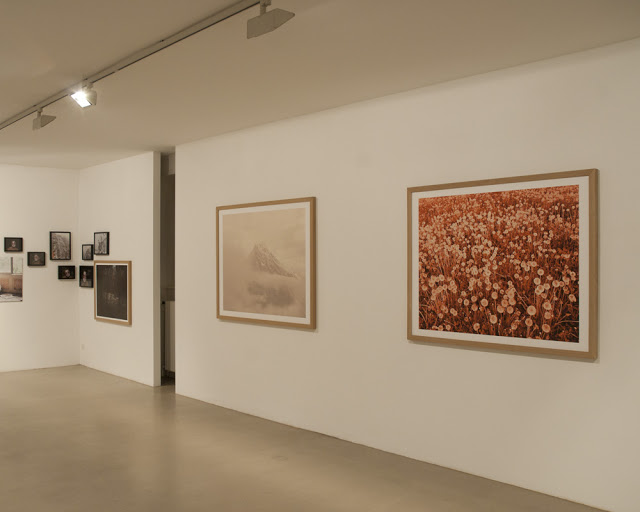 I asked David a couple of questions about this terrific award:
Has creating this project allowed you to feel more rooted in your Japanese heritage?

I’m 30 but I still have many parts of myself to be illuminated. There is still misunderstanding. For this research, I am trying to reduce them. I’m making some efforts on my way. I try to understand my motivations, what bothers me or on the contrary makes me dream. Despite this, I’ll always be a gaijin.

Any advice for emerging photographers?

Just be persevering, loving what you do and sharing your work.

A lot of new pictures 😉