Sara Terry and Teun Van Der Heijden: War is Only Half the Story, Ten Years of the Aftermath Project by Aline SmithsonFebruary 28, 2018 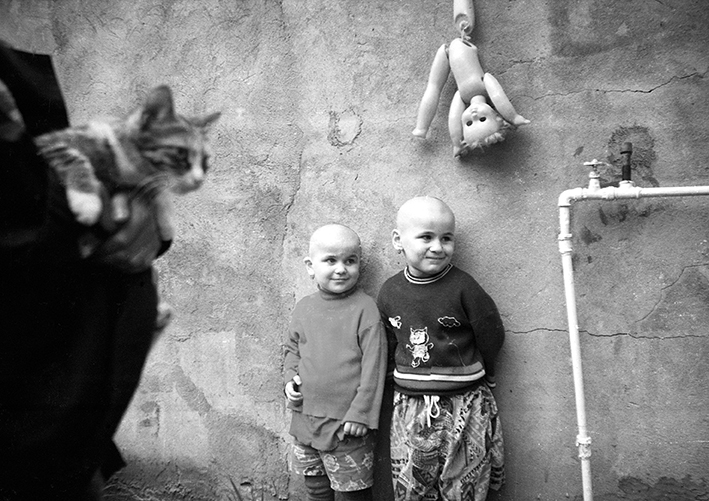 “The end of war does not mean peace. It is simply the end of death and destruction. Every story of war includes a chapter that almost always goes untold – the story of the aftermath,which day by day becomes the prologue of the future.”  – Sara Terry / Founder, The Aftermath Project

The amazing Sara Terry has been a guiding light and incredible supporter of compelling visual story telling over the years, reminding us that the effects of war are long reaching and devastating. In 2006, she created  The Aftermath Project,  a non-profit organization “committed to telling the other half of the story of conflict — the story of what it takes for individuals to learn to live again, to rebuild destroyed lives and homes, to restore civil societies, to address the lingering wounds of war while struggling to create new avenues for peace”.

Publisher Dewi Lewis has recently released War is Only Half the Story, Ten Years of the Aftermath Project, to celebrate this the groundbreaking documentary photography program and mark its 10th anniversary. The book is a remarkable testament and a special volume (the ninth in its acclaimed book program) featuring the work of over 50 photographers from 15 countries that have been winners and finalists in the Aftermath Project’s yearly grant competition from 2008-2016. These outstanding photojournalists, among them Nina Berman, Andrea Bruce, Jim Goldberg, Stanley Greene, Jessica Hines, Carlos Justyna Mielnikiewicz, Javier Ortiz, David Monteleone, Andrew Stanbridge, and Danny Wilcox Frazier. 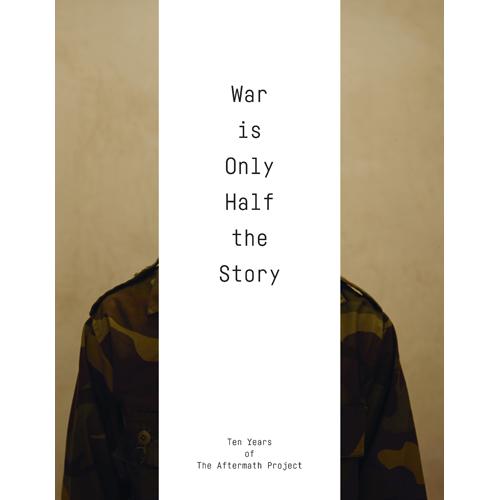 Book Cover for War is Only Half the Story

It’s an exquisite publication, presented with an innovative approach.  Sara Terry states ” … we decided on a fresh approach to the conversation. Instead of a chronological overview of the decade of work that we have supported, designer Teun van der Heijden and I drew on two poems by Nobel Laureate Wislawa Szymborska … Using her post-conflict verbal imagery, we created five themes for the book, and then edited from across our rich archives of 53 grant winners and finalists. With Symborska’s words to guide us … we let the images speak to each other … I believe we’ve created a dialogue that’s never been heard before, a post-conflict visual symphony, one that invites you to listen over and over again.” The book also includes essays by Clare Cavanagh and Donald Weber. An accompanying Traveling Exhibition toured by Curatorial Assistance Launches in 2018.

“War is Only Half the Story” — 10 Years of The Aftermath Project from sara terry on Vimeo.

©Danny Wilcox Frazier — GRANT WINNER, 2010 “SURVIVING WOUNDED KNEE” Horse races at the Oglala Lakota Nation Pow Wow, Pine Ridge Reservation. Lakotas celebrate traditional life throughout late summer with Sun Dances, Pow Wows, and horse races across the reservation. Pine Ridge sits in the poorest region of America, but is nonetheless a part of the country that is rich with culture and traditional life.

Sara Terry is a documentary photographer and filmmaker, and a Guggenheim Fellow in Photography. The Aftermath Project is an outcome of Terry’s five-year-long project, Aftermath: Bosnia’s Long Road to Peace, about the aftermath of the 1992-95 war in Bosnia and Herzegovina. She completed her work in 2005, convinced that a broader public understanding and discussion of aftermath issues was crucial in a world where the media regularly covers war, but rarely covers the stories that follow the aftermath of violence and destruction. Terry founded The Aftermath Project as a way to help photographers tell these crucial stories.

Donald Weber is a photographer whose work deals with the transformations of history through narrative. He is a Guggenheim Fellow and two-time Finalist of The Aftermath Project. He is a senior lecturer in the Bachelor and Master programs of photography at the Royal Academy of Art in The Hague, The Netherlands.

Clare Cavanagh is Frances Hooper Chair of Arts and Humanities and Chair of Slavic Languages and Literatures at Northwestern University. She has translated the poetry of Wisława Szymborska and Adam Zagajewski.

Wisława Szymborska (1923-2012) received international recognition when she won the Nobel Prize for Literature in 1996. In awarding the prize, the Academy praised her “poetry that with ironic precision allows the historical and biological context to come to light in fragments of human reality.” Collections of her poems that have been translated into English include People on a Bridge (1990), View with a Grain of Sand: Selected Poems (1995), and Monologue of a Dog (2005). 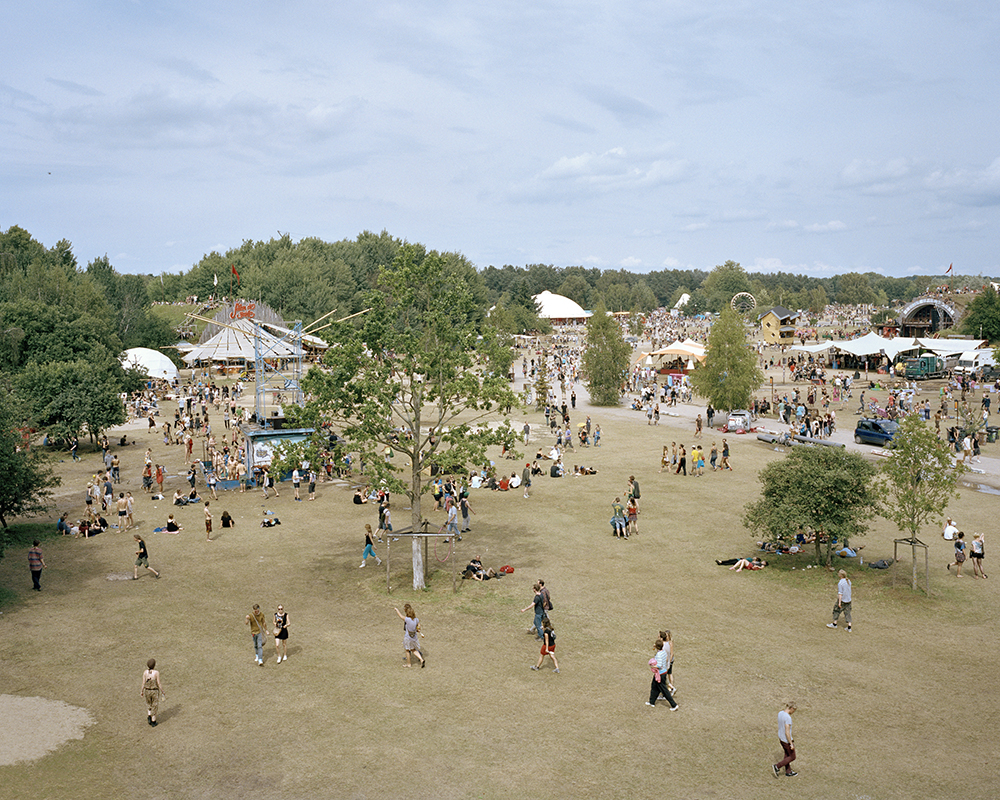 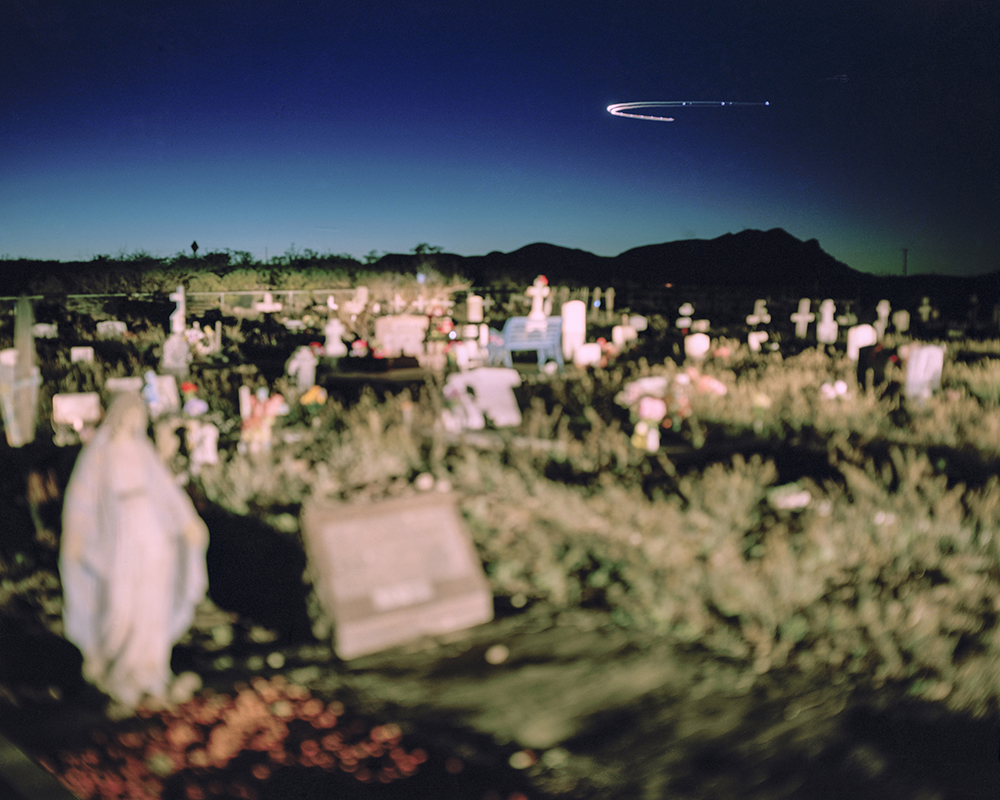 ©Nina Berman — GRANT WINNER, 2016 “ACKNOWLEDGMENT OF DANGER” Luis Lopez Cemetery, Socorro County, New Mexico. Luis Lopez is a town in one of four counties being studied for health impacts resulting from radiation fallout from the 1945 Trinity Atomic test. Unlike residents of Nevada and Utah, those in New Mexico have never been acknowledged or covered under the Radiation Exposure Compensation Act. Luis Lopez residents say dozens of people in the cemetery died of cancer and wonder if it is linked to the Trinity test. Residents within 150 miles of the Trinity site show higher incidents of cancer than in other parts of New Mexico, according to a health impact study released in 2017 by the Tularosa Basin Downwinders Consortium. April 2, 2016 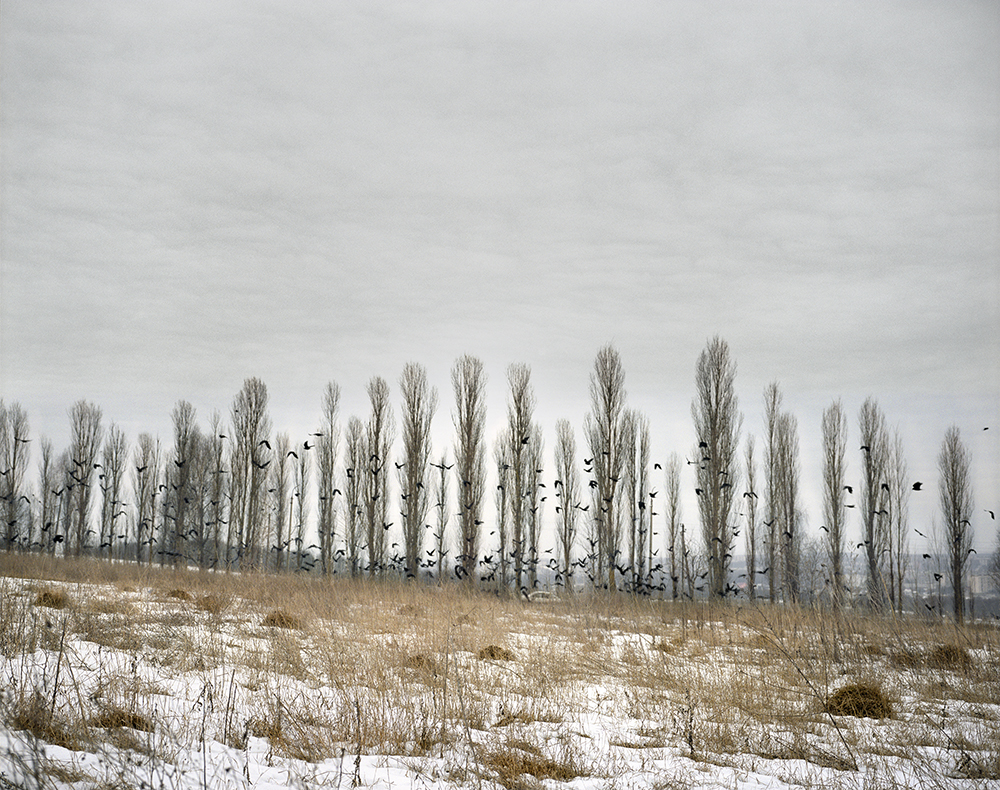 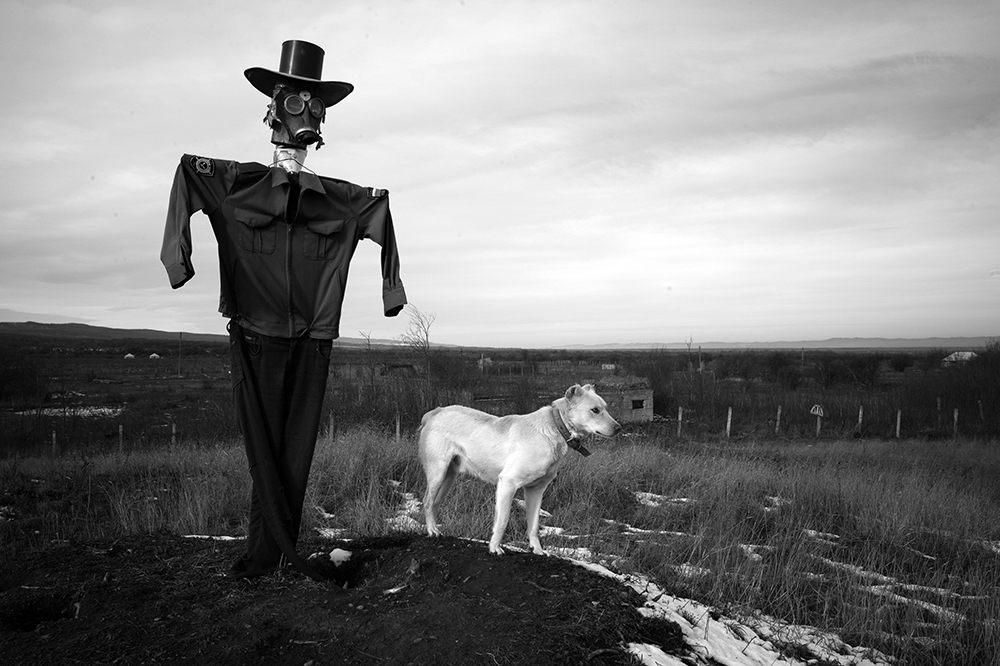 ©Stanley Greene — GRANT WINNER, 2013 “HIDDEN SCARS” A scarecrow and his guard dog watch over the village of Bamut, which was always a rebel stronghold, and was the last village to fall to Russian forces. The entire village was leveled by the Russian military. Bamut is near the Chechen border with neighboring Ingushetia, which lies to the west of Chechnya. In April 2014, Chechen President Ramzan Kadyrov sent forces on a cross-border raid into Ingushetia. A few years previously, he sent forces on a similar raid into Dagestan, to the east. Kadyrov’s pan- Caucasus ambitions are making his neighbors uneasy. Bamut, Chechnya, 2013 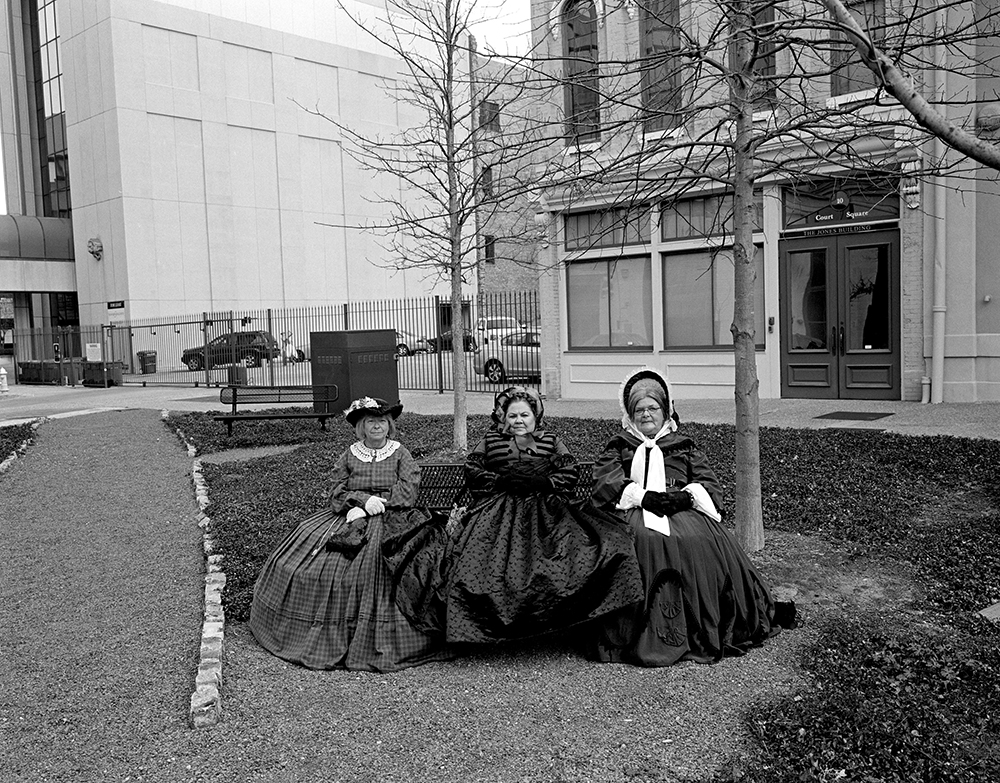 ©Andrew Lichtenstein — GRANT WINNER, 2012 “AMERICAN MEMORY” Montgomery, Alabama, 2011. To celebrate the 150th anniversary of the inauguration of President Jefferson Davis, Civil War re-enactors hold a rally in downtown Montgomery, the first capitol of the Confederacy. Perhaps by coincidence, these women, waiting for the rally to begin, are sitting on a park bench where Rosa Parks boarded the city bus she was arrested on in 1955, which helped launch the Civil Rights movement. 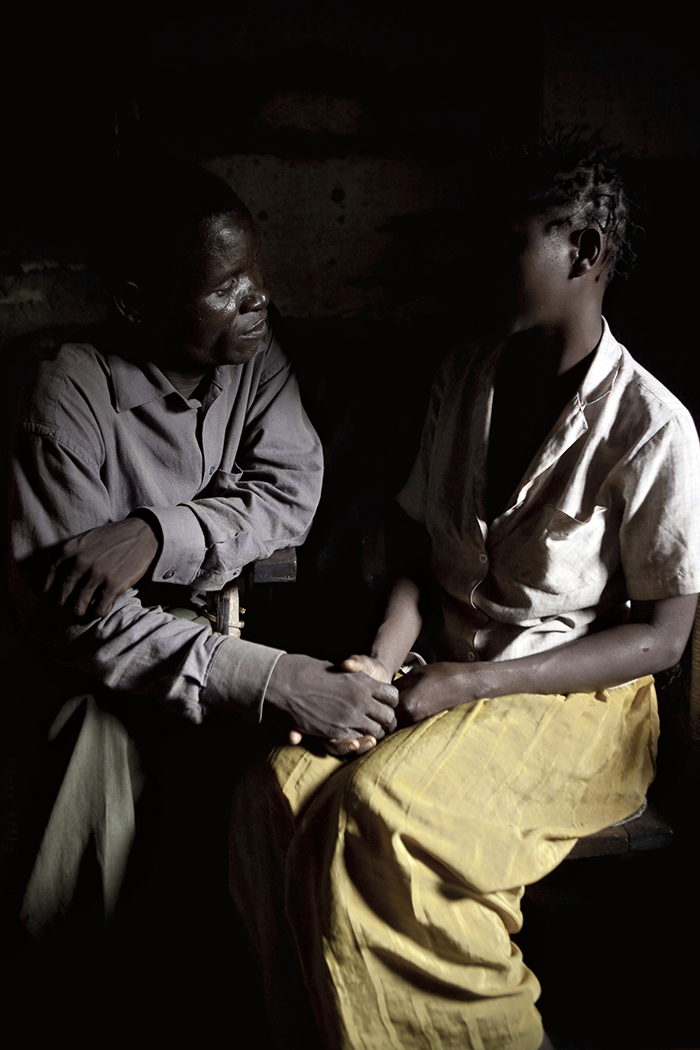 ©Gwenn Dubourthoumieu — FINALIST, 2013 “RAPED LIVES” This couple has benefited from mediation work by the women activists of AFPDE, an NGO which provides medical aid to rape victims. The wife was raped by several men who came to punish her husband. She said, “When my husband returned home, I told everything to him. He did not react, did not say a word and took me to the hospital. I believed that he was angry with me. I was suddenly afraid that he would abandon me. But instead, he took me to the police and encouraged me to tell everything.” 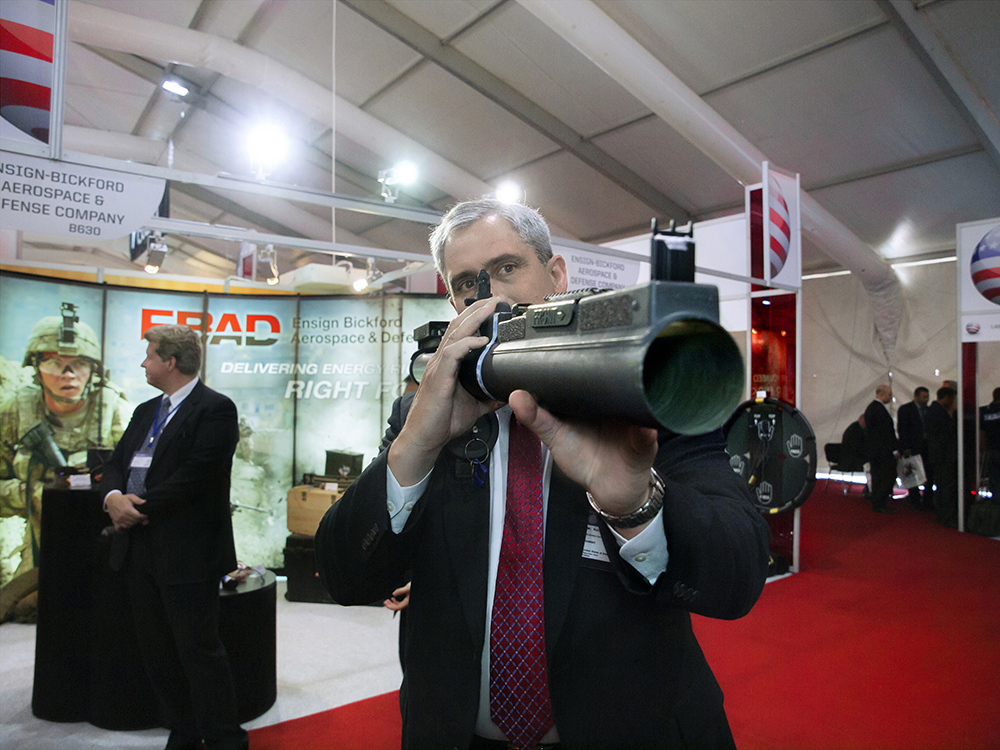 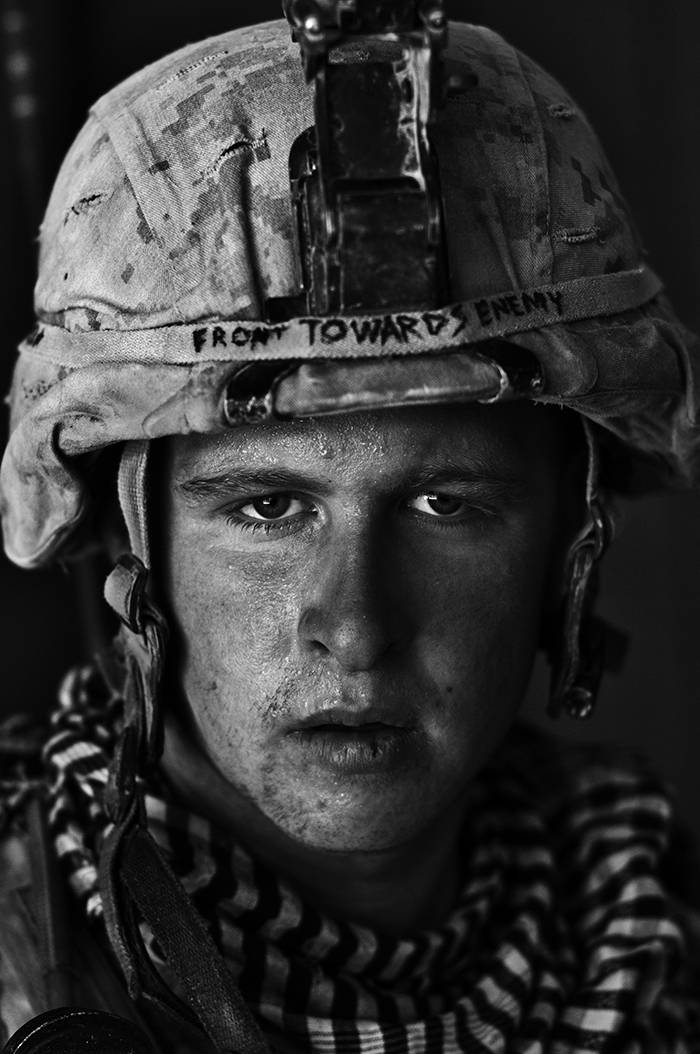 ©Louie Palu — GRANT WINNER, 2009 “HOME FRONT” U.S. Marine LCpl. Damon “Commie” Connell, 20, at Forward Operating Base Apache North, after a patrol in Garmsir District. Damon is from Las Vegas, Nevada, and this is his first tour of Afghanistan 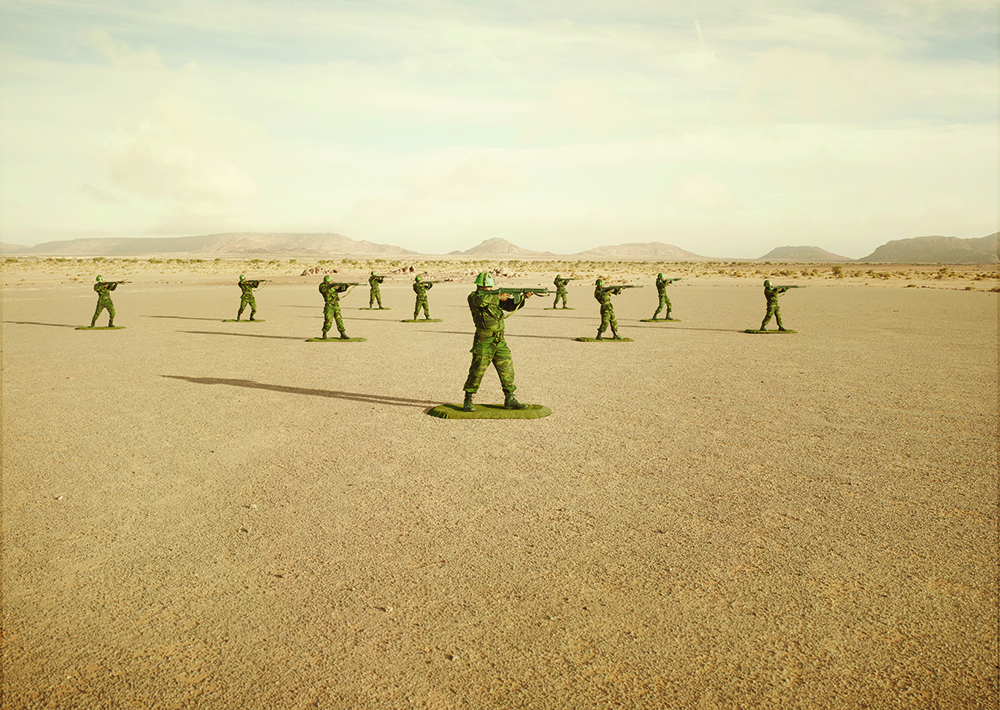 ©Simon Brann Thorpe — FINALIST, 2012 “TOY SOLDIERS” Toy Soldiers Budraiga No.02. “Toy Soldiers” is a unique collaboration between a military commander and an artist in the creation of an allegory of modern warfare that stages real soldiers, posed as toy soldiers, in an investigation into the impact, legacy and dehumanizing effects of war. The series is set in Western Sahara, an invisible conflict stuck within a paradigm of post-colonial conflict for over 40 years. 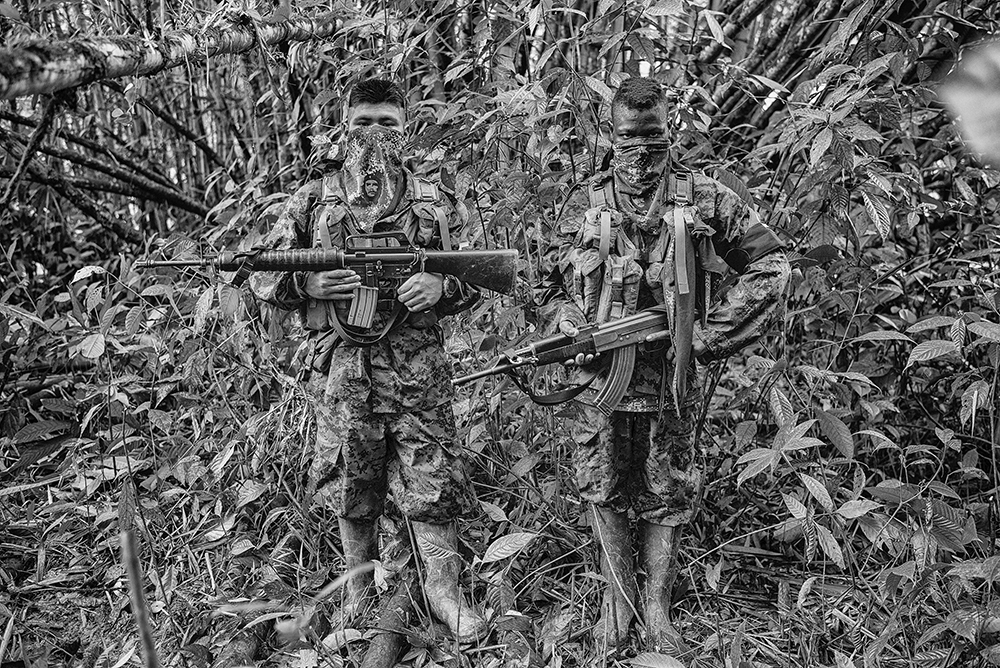 ©Juan Arredondo — FINALIST, 2016 “EVERYBODY NEEDS A GOOD NEIGHBOR” Angél 14, and Daniel (right), 16, members of the ELN Che Guevara Front pose for a picture at their camp in Choc. The Che Guevara front operates on the Pacific coast of Colombia patrolling important corridors to allow the export of cocaine to the Pacific Ocean and into Mexico. February 17, 2014. 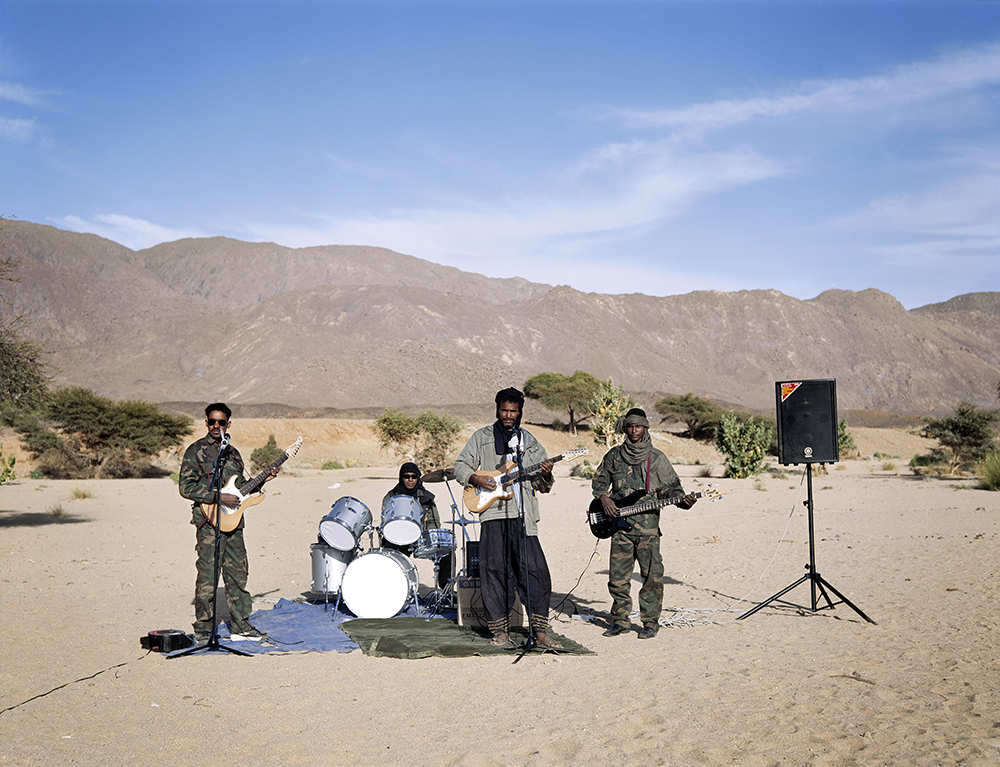 ©Philippe Dudouit — FINALIST, 2014 “SAHEL – THE DYNAMICS OF DUST” (From left to right) Bibi, Al Hussein, Mohamed and Akli are part of a Tuareg rebels music band, founded by the Niger Movement for Justice, a primarily Tuareg militant group, to spread their message all over the Sahel region. In the 1990s, as the first rebellion took place, another Tuareg band became famous as far away as Europe. Northern Niger, 2008. 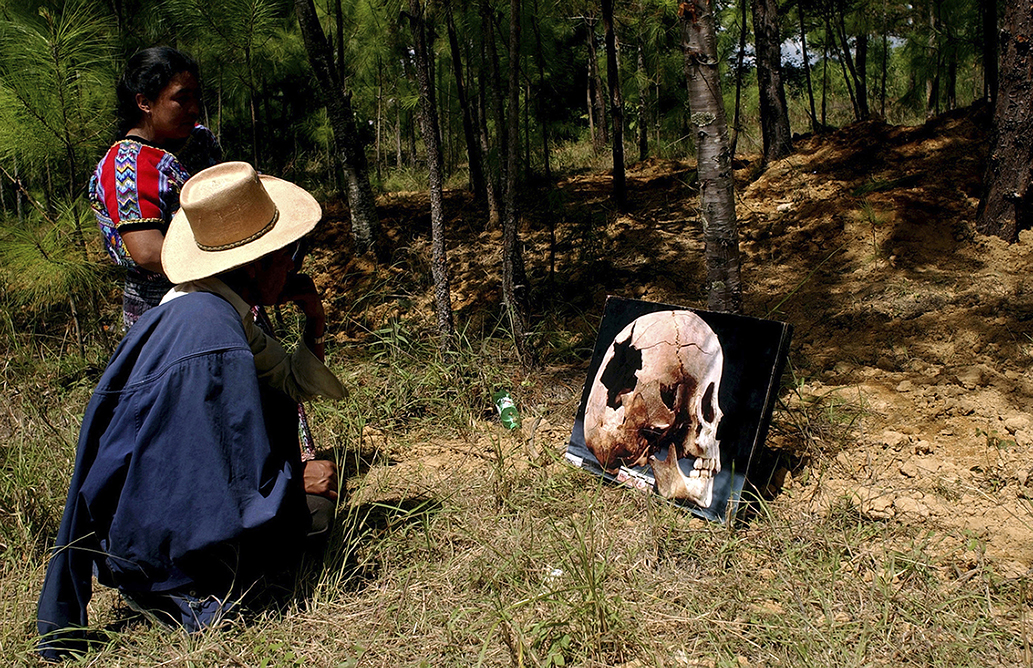 ©Rodrigo Abd — FINALIST, 2009 “RECLAIMING THE DEAD: MASS GRAVES IN GUATEMALA, A STORY ONLY PARTIALLY TOLD” Lorenzo Cuxil and Felicita Oligaria look at a picture of a victim killed by the Guatemalan Army in a former military base in Comolapa, 80 km west of Guatemala City. Guatemalans honor their deceased loved ones on November 1 and 2. November 2, 2004. 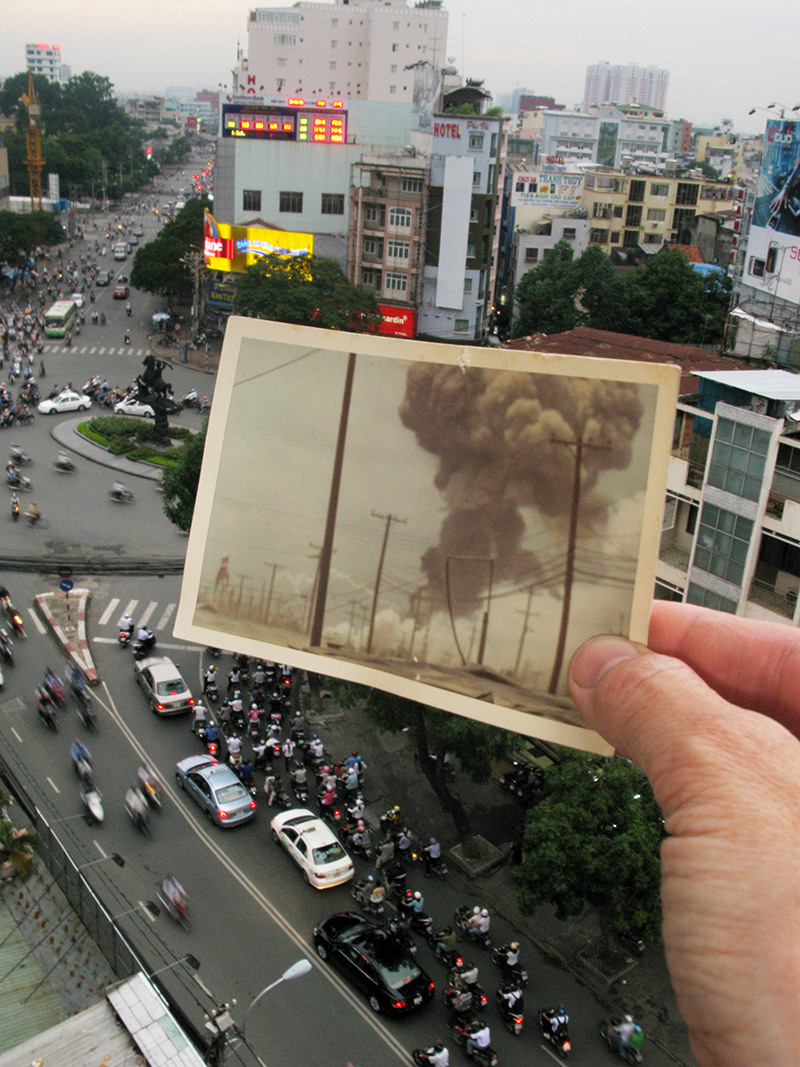 ©Jessica Hines — FINALIST, 2010 “MY BROTHER’S WAR” Chapter 4, Untitled #2, The Beginning. I was standing on my balcony one evening in Saigon watching in amazement the traffic below. When I decided to make this photograph, it was not planned but felt – the image formed in my mind as I stood there in the fading light. I quickly ran into my room, grabbed the camera and made the shot before the light disappeared. The photograph I held was taken by Gary of what appears to be smoke from a bomb blast. I don’t know the exact location where that photograph was made. This is but one of the mysteries surrounding Gary’s photographs and experiences during the war. 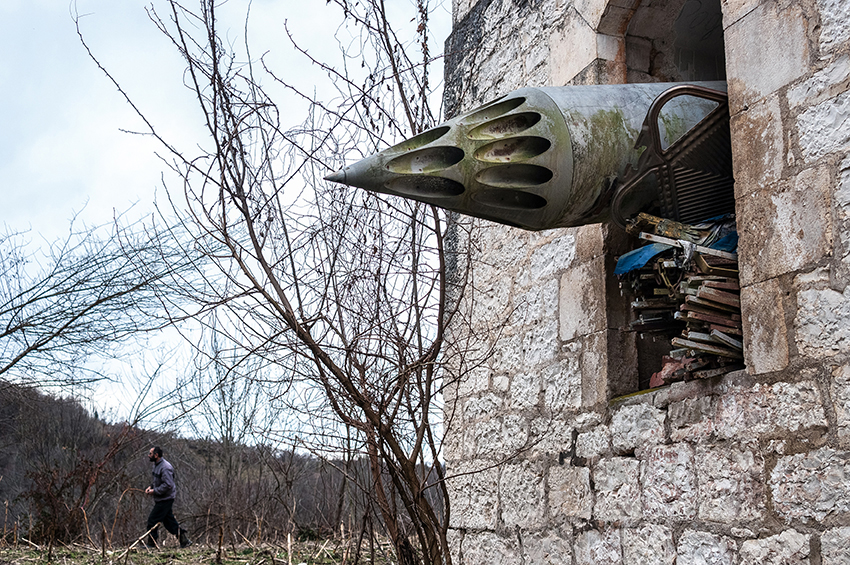