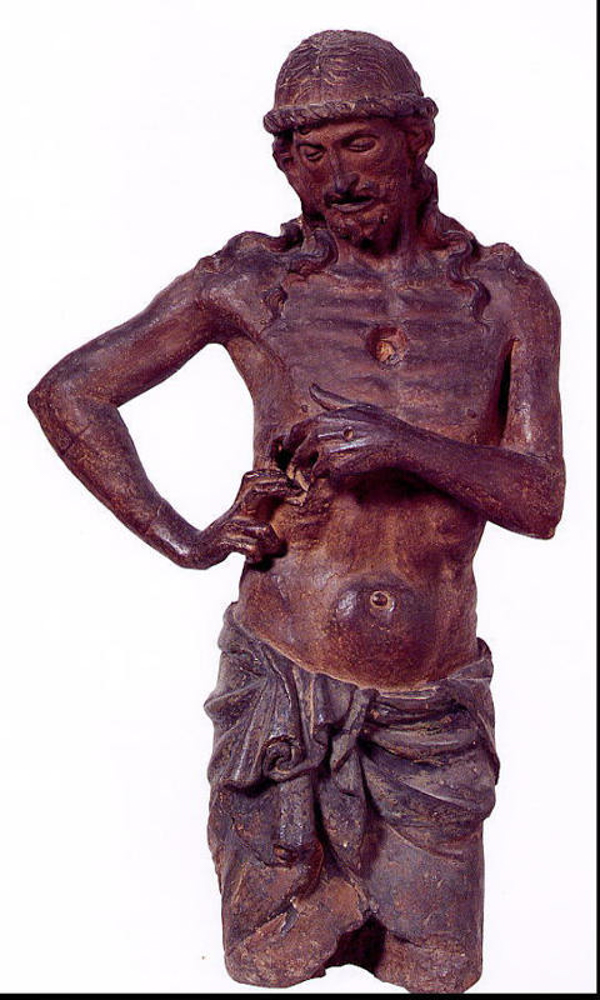 Chosen by Nate, an image of a life-sized terracotta relief, “Christ Showing His Wound,” c.1420-1425, that originally resided at the Hospital of Santa Maria Nuova in Florence, Italy, now in the Victoria & Albert Museum in London.

My last semester of college I took one of my favorite courses, Devotional Imagery. Throughout the class I was repeatedly surprised by how religion weaves itself into such a wide variety of art, but I also loved looking at scenes that were direct representations of Christ. As a queer and religious person I was immediately awed by Anderson Clark’s series, Ostentatio Vulnerum: Display of Wounds. The religious theme of the work is not subtle nor is the direct comparison to trans men. As I look at these images I can’t help but think of a declared believer demanding proof of the Resurrected Christ. Did he really die for me? Let me see the wounds. Let me touch the scars. And how even a self-declared trans ally might demand proof, are you really trans? Are you who you claim to be? Let me see. Although proof of Christ’s wounds might seem unnecessary for a true believer, he still offered them up. Here Clark has also graced the viewer with proof of these salvific wounds. 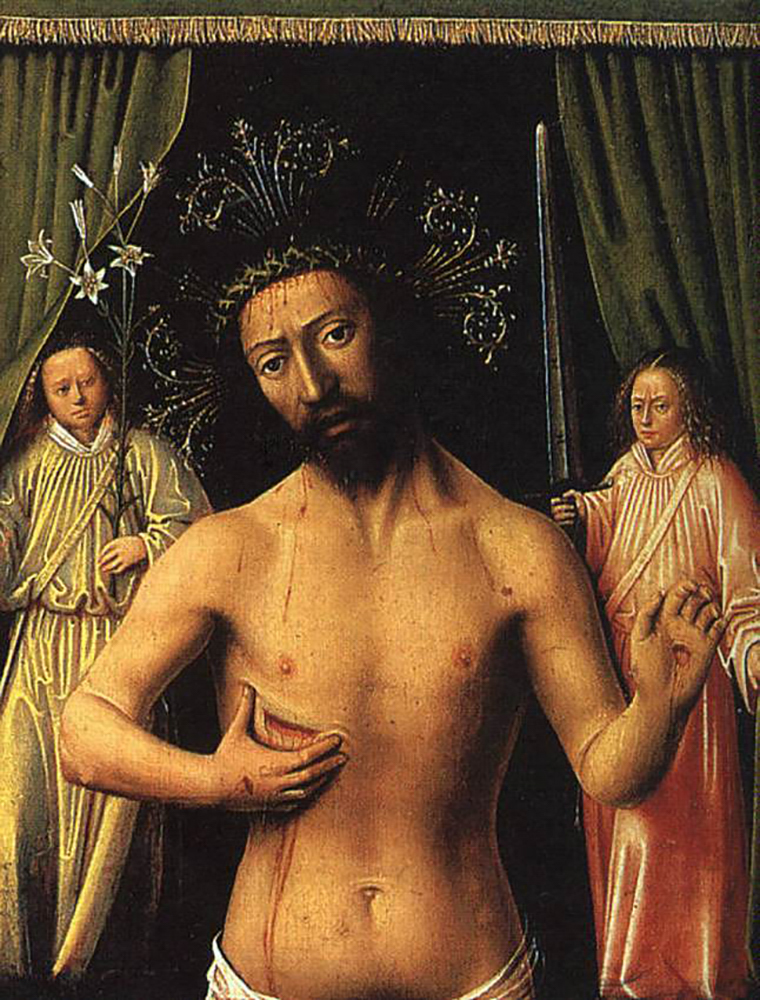 Chosen by Dylan, an image of the painting, “Christ as the Man of Sorrows,” by Belgian painter Petrus Christus, c.1450, currently at the Birmingham Museum and Art Gallery, U.K.

Anderson Clark is a scientist and photographer. Originally from the Midwest, he has lived in the Boston area since 1998 and works in the biopharmaceutical industry in cancer research.  He took up photography as a way to merge his analytical and artistic interests, enjoying the technical aspects of this art form while using it to express his creativity. 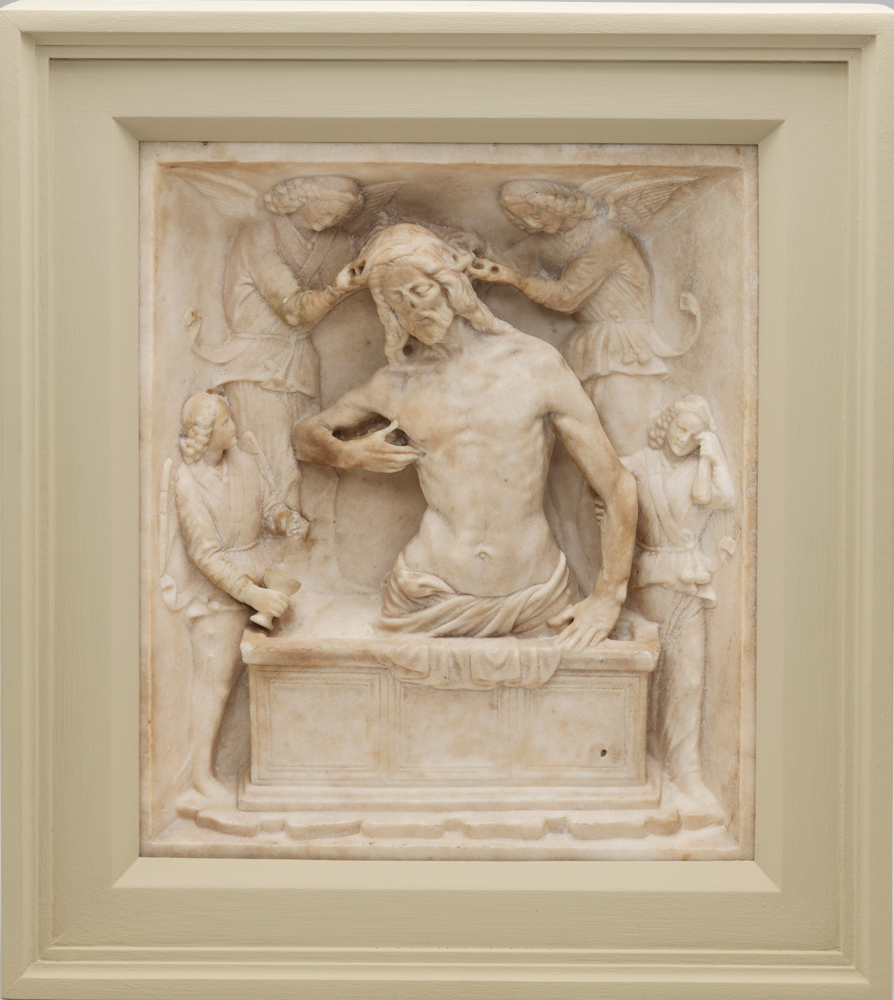 Chosen by Jonas, an image of the marble relief, “The Man of Sorrows,” unknown mid-16th century Milanese sculptor, currently at the National Gallery of Art, Washington, D.C.

When I first came out as trans and explained my true sense of self to family and friends, my words were doubted by some, deemed inadequate proof over what my body presented to the world.  This is too often the experience for trans people.  Some of us will medically transition to bring our bodies in alignment with our internal selves, which I view as a type of personal resurrection. For me, trans surgical scars become visible emblems, proof for the doubters that we do know ourselves. 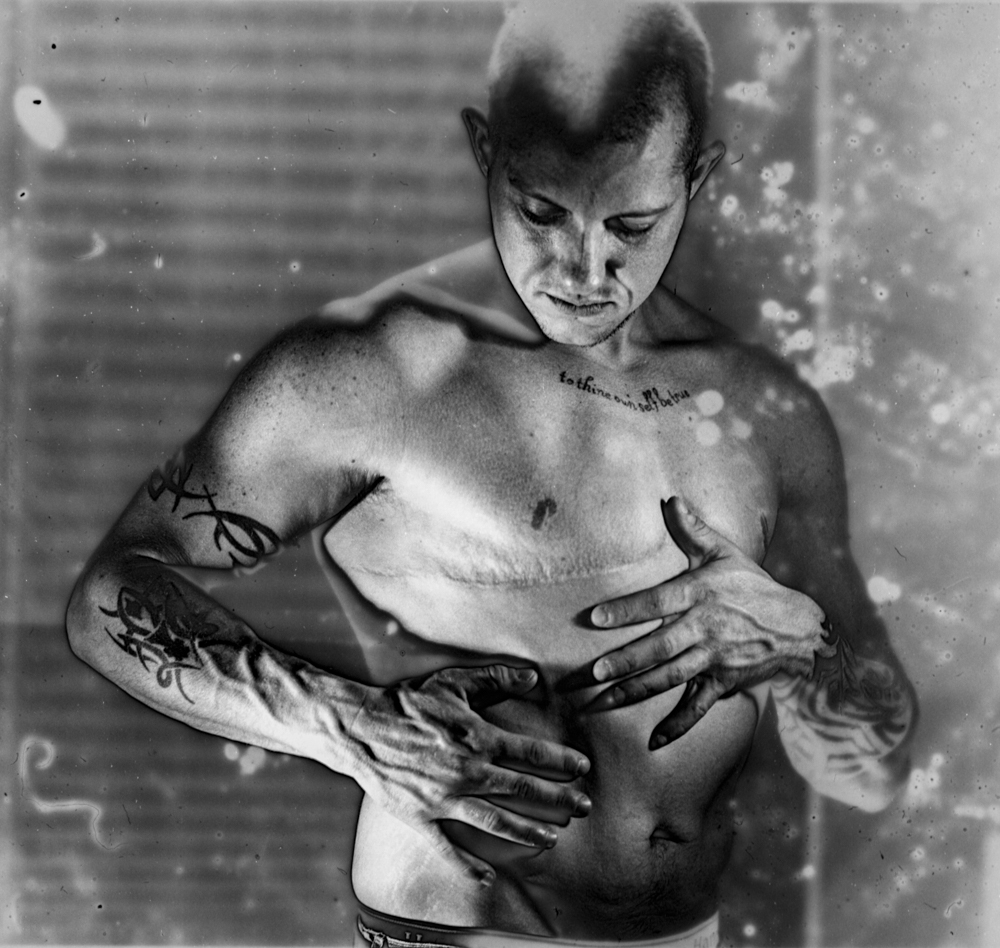 Nate was the first person I photographed for this portfolio. I loved his physicality and his tattoos, especially the one on his chest, “to thine own self be true,” which underscores everything about this project. I think of his image as the “anchor” of the portfolio.

That experience informed this project where I photographed transgender men in the pose known as Ostentatio Vulnerum, “display of wounds,” which invites subject and viewer into a space of transformation.

At the time of portraiture, I showed subjects a collection of various artistic renditions of the iconic biblical image from the Gospel of John (20:19-29) where Jesus reveals his resurrected embodiment by displaying his wounds to a doubtful Thomas.  I asked each subject to choose the image that spoke to him and then interpreted that image when posing the subject for the portrait.  I subsequently removed the image from the collection so no other subject could choose it. 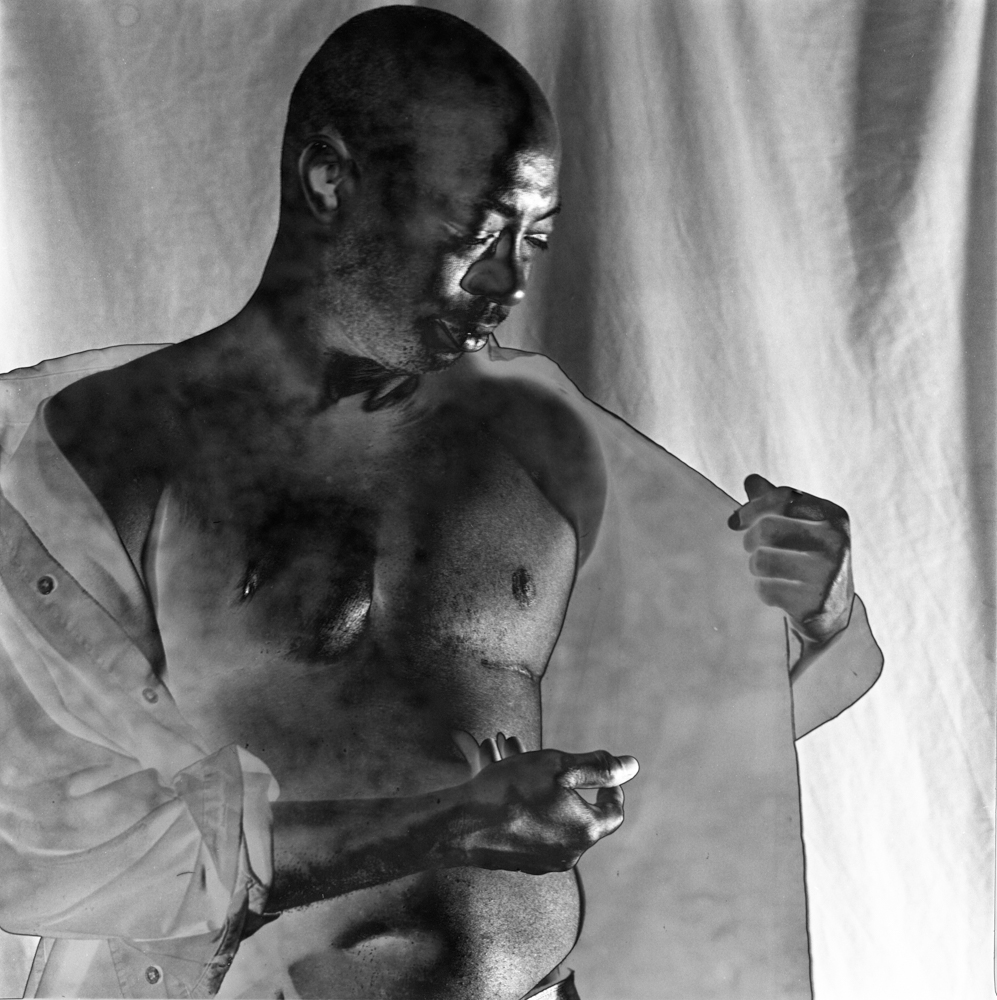 To recruit subjects, I pitched this project at a transgender conference, which is where I met Lyle. When I showed him examples of the Sabatier effect, he asked, “How do you know that I won’t disappear completely?” I really didn’t have an answer because sometimes dark tones would become completely reversed during solarization. The interesting result was that the solarization lightened the tones of the black shirt that Lyle was wearing while his skin tones were mostly unchanged.

Shooting with a medium format analog camera using black & white film, I solarized the negatives during development to obtain the Sabatier effect, which lends itself well to this vision of transformation. The subjects appear both to come from shadow into light and also to generate their own light. Pose and effect together bring forth the inner and outer transformations from which the subjects emerge.

I created this portfolio 10 years ago. Although individual prints have been selected for various juried exhibitions over the years, the complete body of work has never been seen publicly. 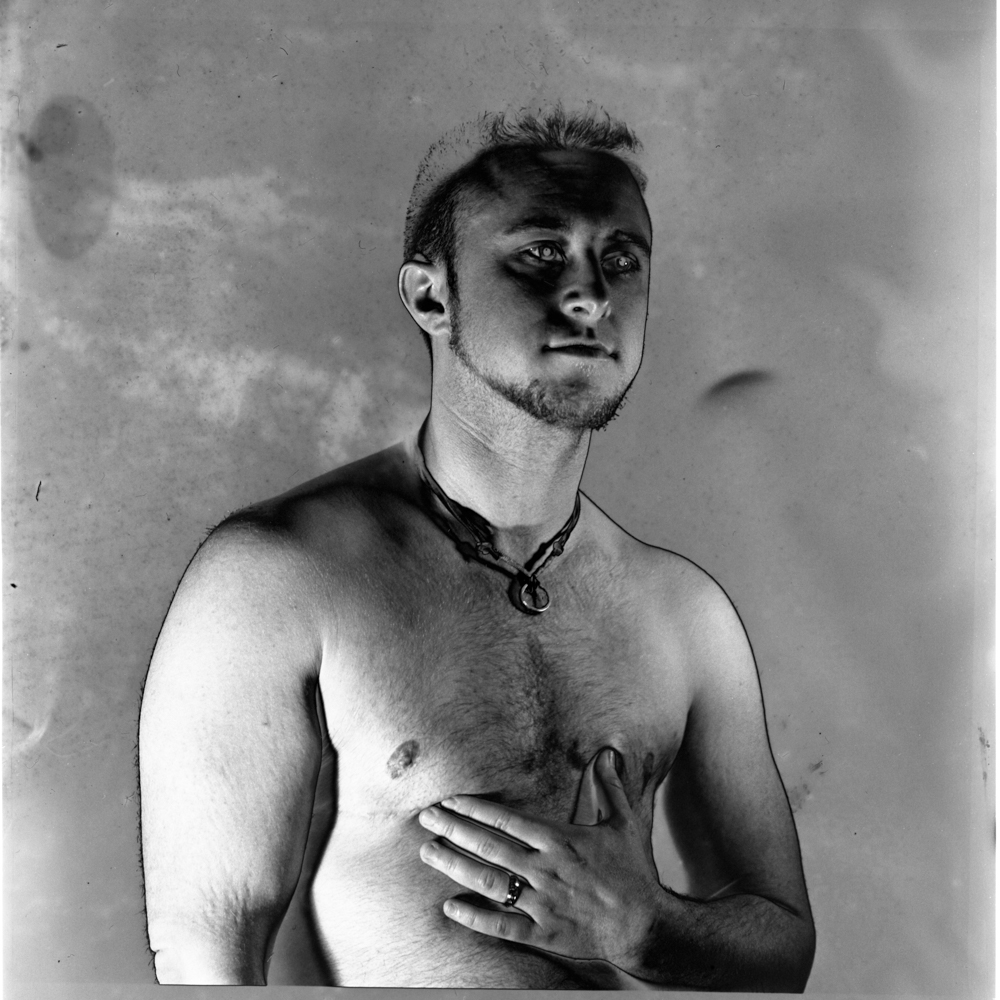 I photographed Ry twice for this portfolio. I asked him to participate the first time, which was relatively early in his transition. About a year later when I was wrapping up the project, he asked to be photographed a second time because he felt that it would be a better representation of him. This image is from the second shoot.

You mentioned you were a scientist, does this affect how you approach photography beyond the technical aspects?

That’s an interesting question that I have not considered before. I use my scientific knowledge to understand the techniques I need to employ in order to achieve the images the way I imagine them. That is the main way in which my analytical side influences my creative side. 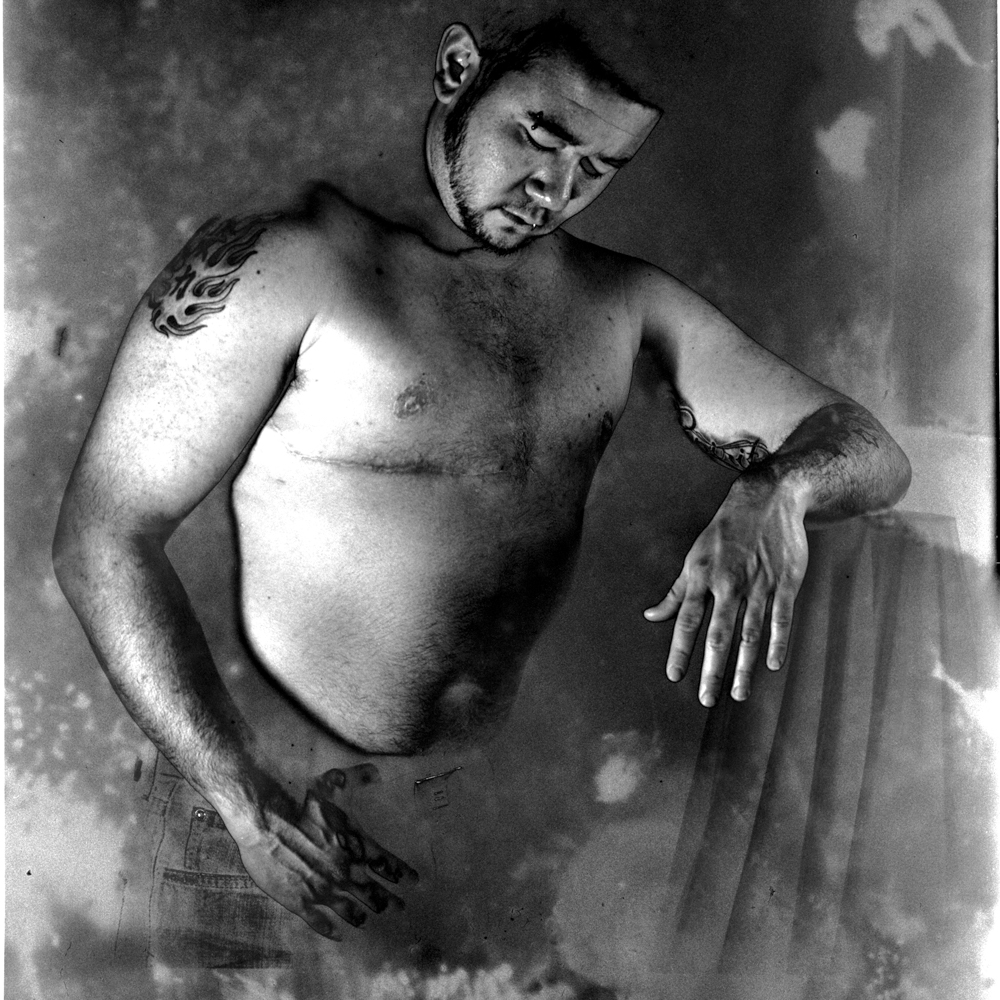 I was introduced to Tommy by Ry. Tommy was kind enough to fly to Boston from the Midwest to be photographed for this project. There were a number of great negatives of Tommy – it was difficult to chose just one to represent him.

What helped you come to the conclusion that transitioning was a sort of personal resurrection?

The underlying basis of this project was conceived in the 2000s by two trans Episcopalians, one of them a priest and a friend of mine, Cameron Partridge. He explained that for him, similar to “the Paschal Mystery,” his transition was a mysterious experience and a process of being led into a newness of life. This core of the Christian story spoke deeply to him as a trans person, especially the image of Jesus’ side-wound in the Gospel of John, a wound that was acquired in death and not smoothed away in his risen body. What he said resonated with me because I saw my own transition as a renewal of my life.  My old persona, the person I used to present to the world, “died” when I transitioned and was even mourned by some friends and members of my family.  The physical scars I carry from my transition are the consequences of my personal renewal and for me, that is represented in this project. 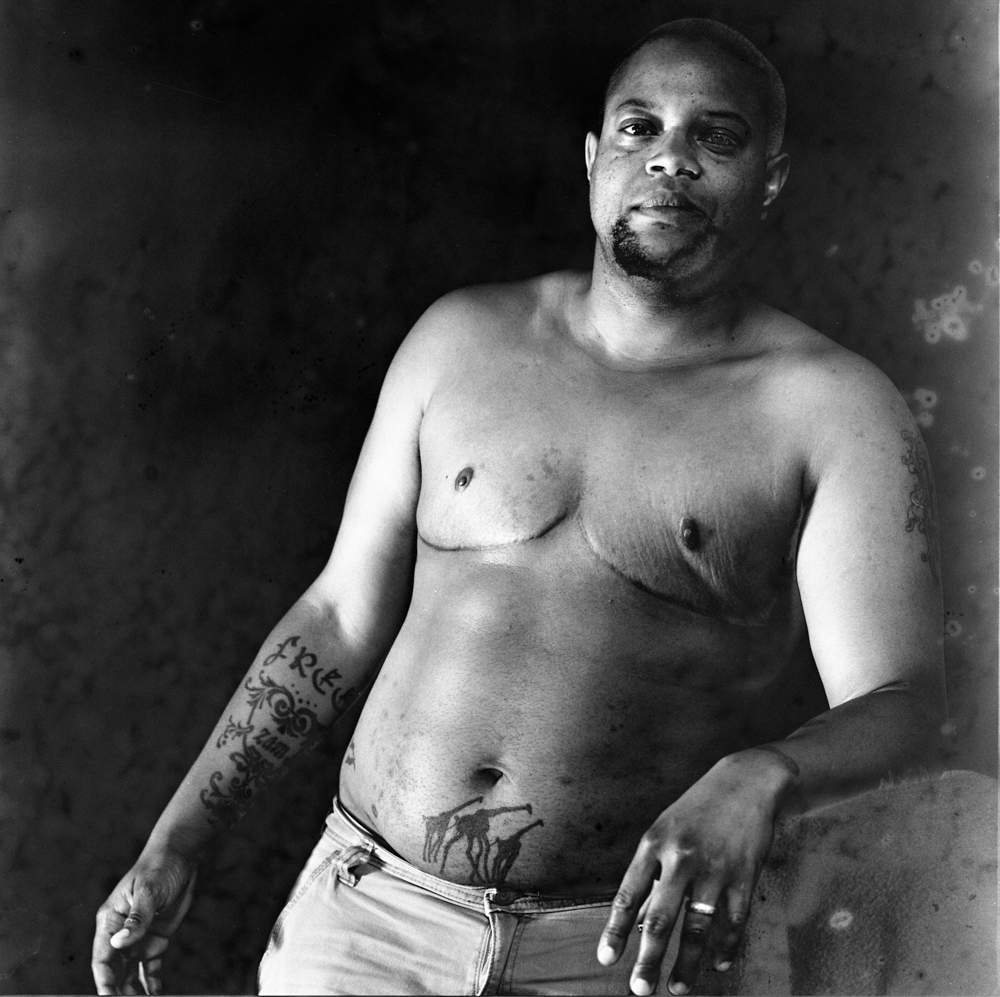 I consider Zion to be very centered and grounded, which I think comes through in this image. He had transitioned years before I met him, so I chose this mildly solarized image because I felt it represented his relatively more established transformation.

Do you explore religious themes in all your work?

I would say there are aspects of spirituality in most of my work, although usually it’s internal and is not obvious in the images. For me, photography is a meditative process.  And then there are the projects like this one where the religious aspects are more intentional. 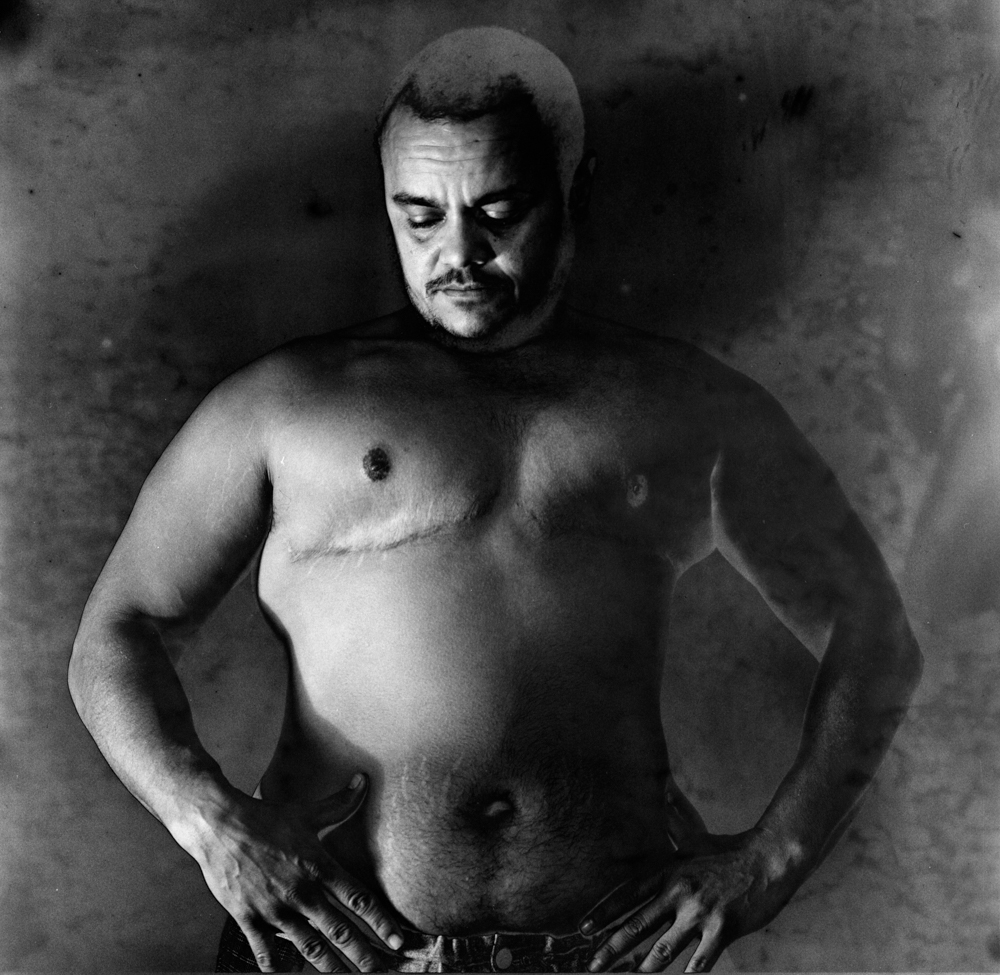 I met Theo through Zion and photographed them during a session in Theo’s garage. Lyle knew them both and stopped by during the shoot. Theo took the most time to choose one of the iconic biblical images. Each subject had his own process when choosing, which was very interesting to witness.

Is your work meant to push for inclusion of Trans people in mainstream religions or create a separate space for queer/trans expression in Christianity? Or something else?

This project is not directed toward any particular type of religious audience. For me, it’s not a call to action but more of a representation of some of the ways I viewed my own transition.  Cameron would tell you that the project expresses the complexities of Christianity in that it is queer, trans, and intersectional. 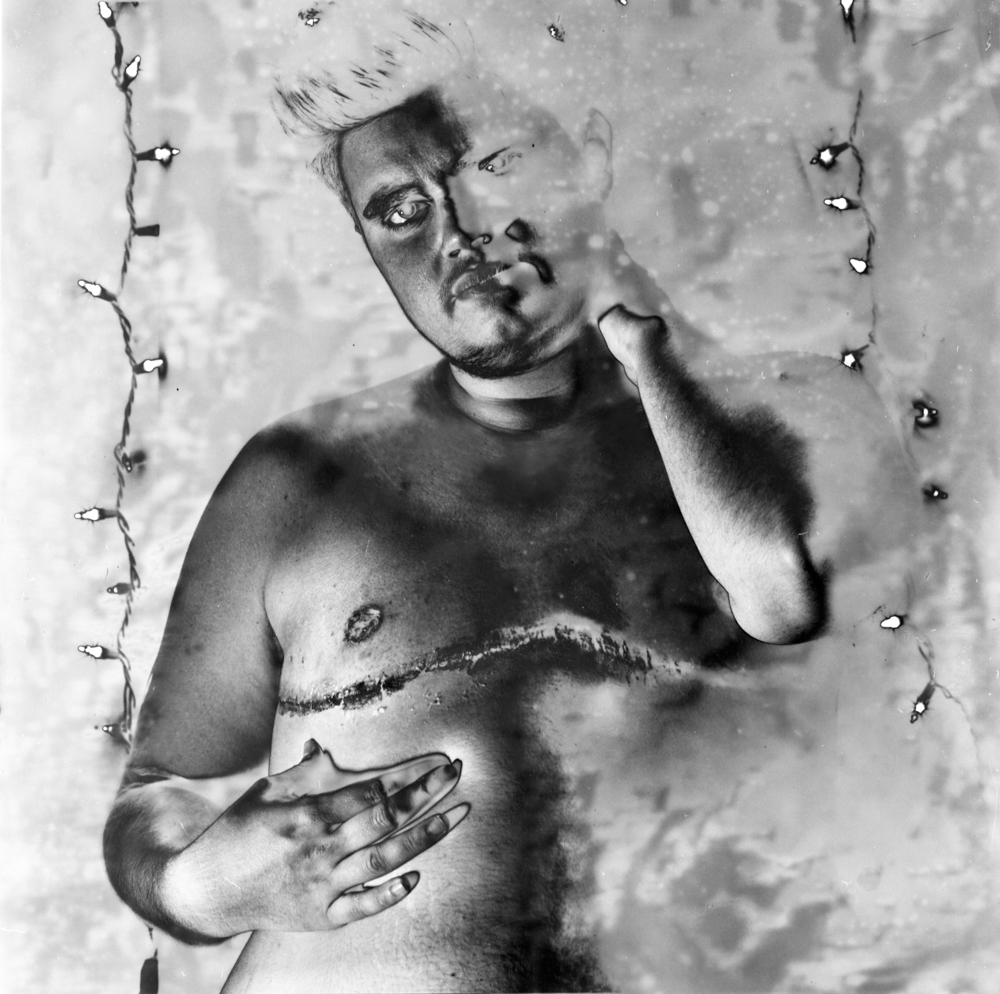 In the iconic painting that Dylan chose, the artist had included a fictive frame around the head of Jesus. In interpreting the chosen image, I used a string of lights that were around the windows in Dylan’s apartment to frame him when I shot the photograph.

Do you view the project as completed or do you see yourself adding to it?

I completed this portfolio roughly a decade ago and I have never felt the need to make any additions to it. I experienced a great sense of satisfaction at the time that I finished it which I have not wanted to disturb. 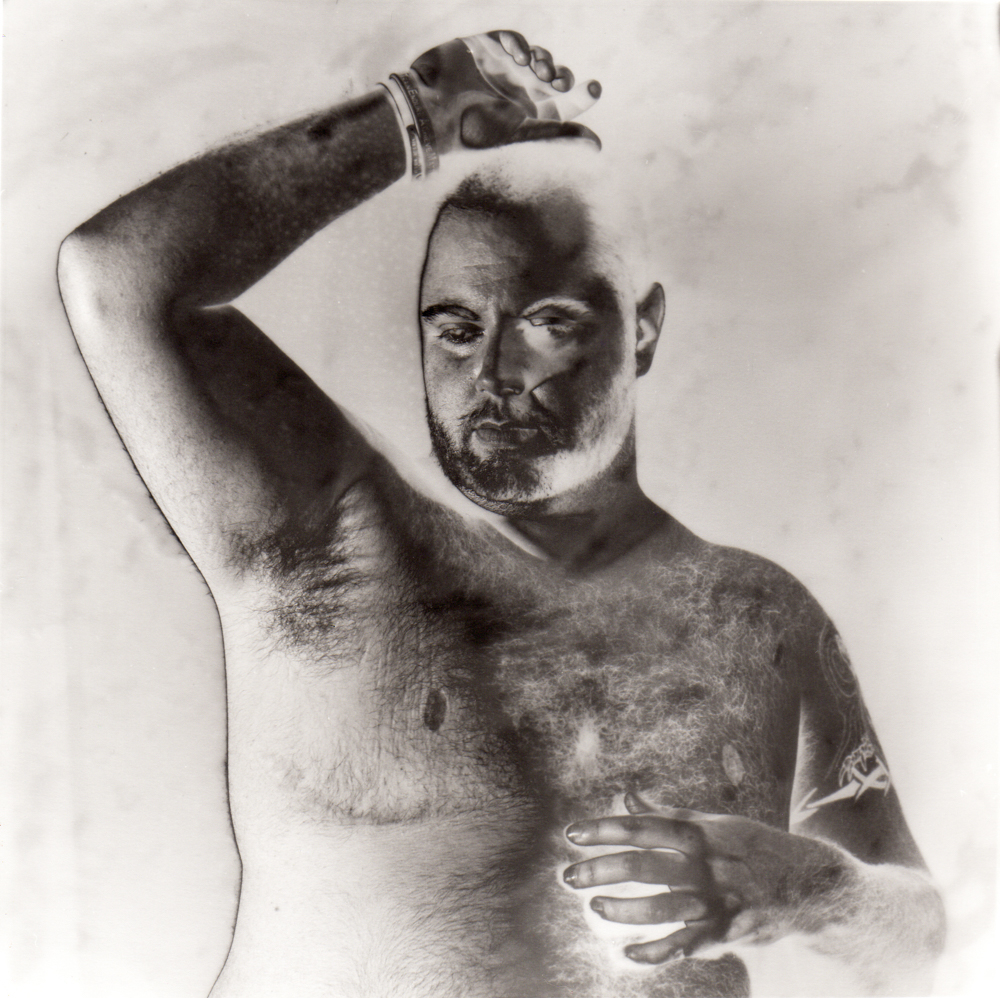 Of all the images in the portfolio, this one of Trevor reminds me the most of Man Ray’s solarization photographs. Man Ray’s work was the inspiration for the process that I used in this project.

What are you currently working on?

My current project is about angels, speaking of religious themes. For years I have contemplated an idea that trans people exist because they are actually, but unknowingly, angels on earth.  I don’t imagine that angels possess or express gender as we know it, and so putting an angel’s essence into a human body would cause the mind-body incongruities that many trans people experience.  For this project I am using 8×10 inch black and white sheet film. Technically it’s very challenging and after roughly two years of working out the conditions, COVID hit.  The darkroom space I had been renting didn’t survive the lock-down and it eventually closed. I bought some of the equipment when they sold it off and am now putting a darkroom in my basement so I can continue the work. I’m very excited about this project and the images are quite unique. I look forward to sharing them as the portfolio progresses. 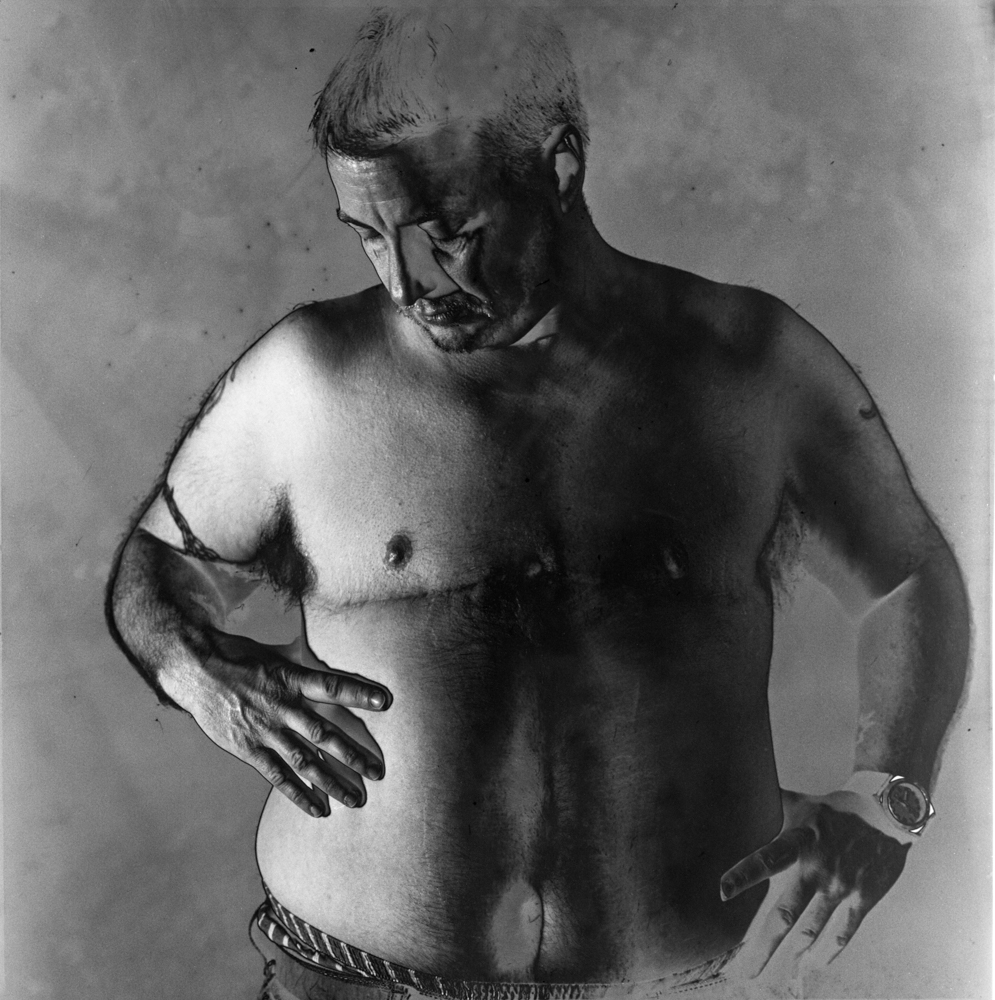 This photograph of Jonas shows my most literal interpretation of a subject’s chosen iconic image. For the most part, I was relatively liberal in my interpretations when I posed the subjects.

NEXT | PROOF: Heléna Dupre Thompson: Bridge City Diary >
< PROOF: Sheri Lynn Behr: And You Were There, Too | PREV