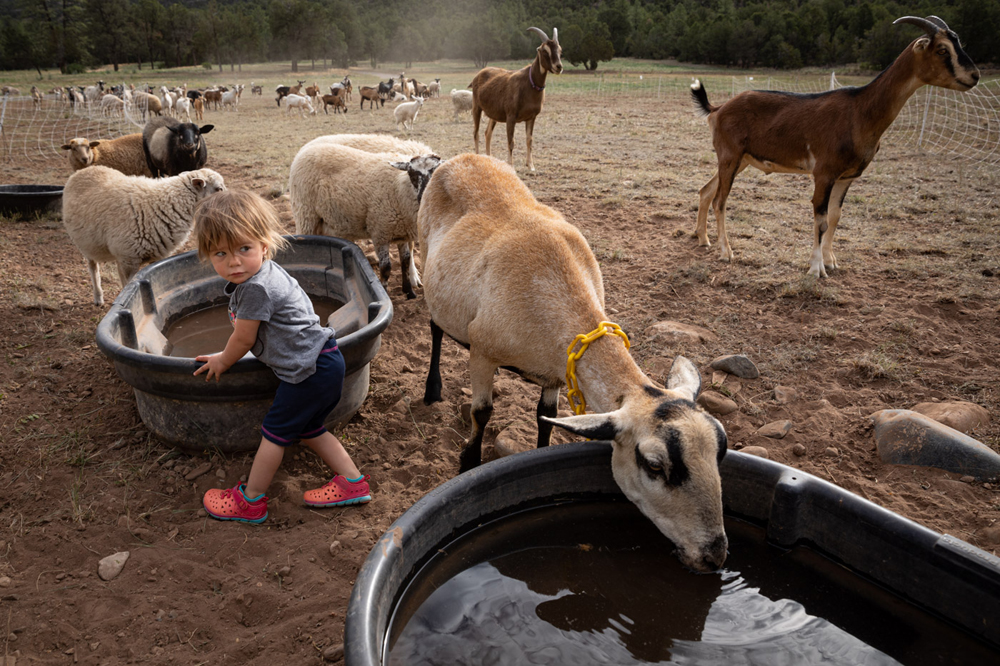 ©Esha Chiocchio, Miracle Thorp Berto plays in a water trough and hangs out with the goats as they perform their goat-scaping duties in Pecos, New Mexico. Using goats, rather than mowing, improves soil fertility through hoof action and the natural addition of manure.

Congratulations to Esha Chiocchio for being selected for CENTER’s Environmental Award recognizing her project, Good Earth. The Environmental Awards recognize work focusing on the state of the ecological environment. Topics may include but are not limited to, conservation, biodiversity, ecology, climate change, or other issues concerning the natural world. All projects exploring ecological relationships, topics, or themes are eligible. The Award includes a Mentorship, a Review Santa Fe Admission and Project Presentation, a Group Exhibition of Award & Grant Winners at the Turchin Center for the Visual Arts, a Project Publication with Lenscratch & Feature Shoot, and Inclusion in the CENTER Image Library & Archive.

It is such an honor to be asked to judge the Environmental Award category. In my first correspondences with CENTER, I was asked what would make a strong submission, and I answered that I expected I’d “be seeing reportage photos of people at work or collaborating somehow, or new environmental technology blended with nature.. like turbines on farms, solar panel installations.” I was delighted to see that many submissions fell outside of that expectation. Many submissions were carefully crafted art exhibits that featured varying photo processes on paper, silk, metals, motion with audio – close-ups or aerials of earth and nature, collaged in patterns that were sumptuous and playful, or serious and foreboding – and not at all like the editorial style photography that I work with on a daily basis.

The most rewarding part of viewing all of these submissions is that they reinforced for me why photography is so appealing – it was all about capturing a moment in time before it flees. There are many references to works as ‘time capsules’ and holding the earth in its health while we can – if even only visually in a photo. Many references to dreams and memories made works personal and intimate – focusing on family who passed or a time on earth where society didn’t collectively hold as much climate anxiety as we do today. Many works evoke childhood smells of damp earth underfoot and decaying leaves – a reminder that we take nature and earth for granted as a ‘constant’ foundation, but now are being thrown into measuring earth’s days and worrying about how we can mend it. And with the remembrance of childhood comes the adult concern that we need to leave this earth for another generation, and how do we steward the earth to make it last for generations to come?

Ultimately the body of work that I chose presented itself as a series of photos that seemed like a story unfolding – showing humans as stewards working with the earth and soil, and showing diversity in the people portrayed in the images. These images evoked the smells and sounds of working outdoors, in the sun, smelling soil – yet at the same time carried a gravitas of tending to the earth in a way that is kind and supportive, while also nodding towards environmental justice and including all humans as important in its terrain. It held some semblance of positive systemic work that felt fresh and interesting to me, and I found myself wanting to see more.

I am infinitely grateful to get to view this collective body of submissions in this category -because many are beautiful photographic jewels; individual artworks that spoke to me because they highlighted the gorgeous patterns of nature, or patterns of the human mark in natural terrains. The range of expression and media was impressive, and the decision was difficult – as I could find a purpose for all the works submitted and overall a great love and concern for the earth in all. 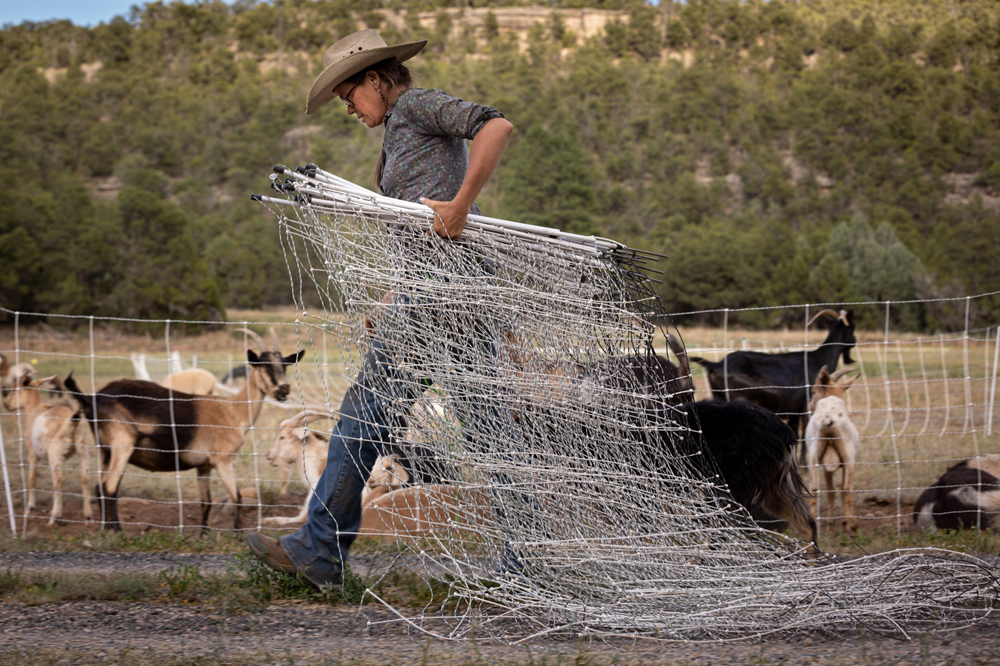 ©Esha Chiocchio, Amanita Thorp Berto, owner of Horned Locust GoatScaping, moves electric fencing to give her goats a new area to graze. She is hired to bring her goats and sheep to rural and urban properties throughout New Mexico to help revitalize degraded landscapes.

Paula Trotto is a photo/video producer, photo editor, and researcher at the Environmental Defense Fund – where she specializes in visual storytelling in print publications as well as online content.

Previously she worked with NRDC.org, and on magazine publications such as Oprah Magazine, Newsweek, Businessweek, Real Simple Magazine, and Travel and Leisure. She has served as a Portfolio Consultant for SPD (Society of Publication Design) Portfolio Review sessions, and projects that she has collaborated on have won Honoree spots via the Webby Awards.

Esha Chiocchio is a photographer and filmmaker who uses her combined knowledge of visual storytelling and sustainable communities to inspire social change. An optimistic realist, she focuses on solutions to societal and environmental challenges. Good Earth, her current project, is a multimedia collaboration that features the work of agrarians from diverse sectors who are revitalizing land through regenerative practices. She has photographed around the world for publications, non-profits, and commercial clients, including National Geographic, Bonefish Grill, and Jardins du Monde.

Esha teaches photography at the Santa Fe Photographic Workshops and Fredric Roberts Photography Workshops and serves on the board of the New Mexico chapter of the American Society of Media Photographers. Her photography has been exhibited in group and solo exhibitions in France, South Korea, Mali, Washington, DC, and Santa Fe, NM. She has BAs in Anthropology and French from the University of Colorado, a Masters in Sustainable Communities from Goddard College, and served as a Peace Corps volunteer in Mali, West Africa. 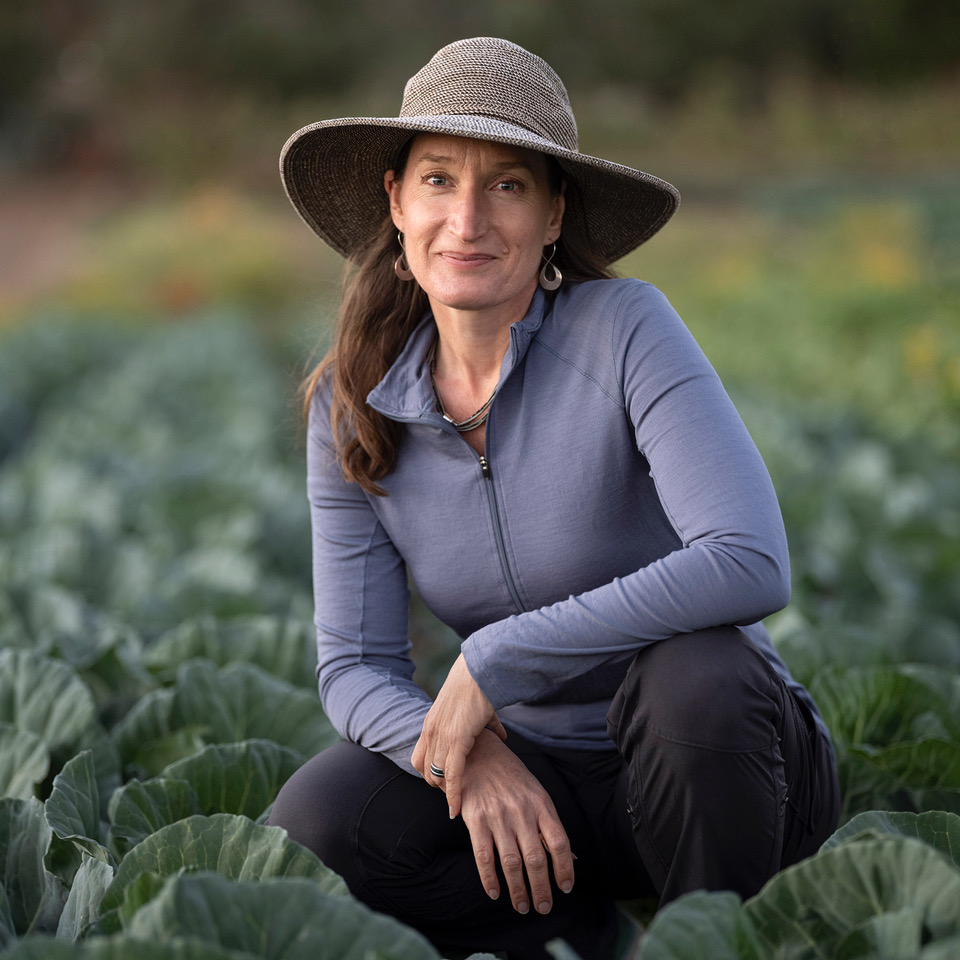 Portrait of the photographer Esha Chiocchio 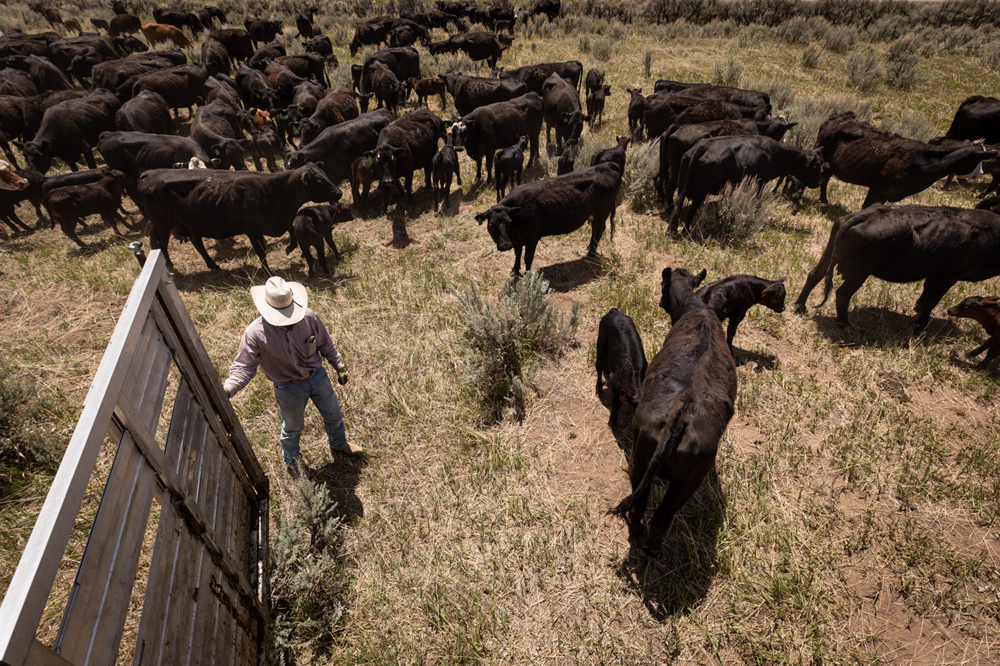 ©Esha Chiocchio, Tommy Casados moves his cattle to their summer pasture. He rotates the cattle through several pastures and moves them almost daily within each pasture to ensure the grass is not overgrazed. This strategy, also known as carbon ranching, helps build deep root systems which increase carbon in the soil, thereby making it more resilient to both flooding and drought.

In New Mexico, where I have lived for over twenty years, conventional agriculture, excessive grazing, misguided stormwater management, and a multi-year drought are causing the desertification of our already arid lands. As an optimist, scholar of sustainable communities, and climate educator, I am interested in solutions. When I look at the many ways we can mitigate and adapt to the changing climate, soil health is of prime importance.

Soil stewardship plays a key role in mitigating climate change, improving water cycles, increasing agricultural production, augmenting nutrient density, enhancing wildlife habitat, and so much more. In short, it is one of the essential keys to rebalancing the earth’s atmospheric and terrestrial systems. Soil has the potential to absorb 5.5 billion tons of carbon dioxide per year (about 85% of annual emissions in the US). In addition, for every 1% increase in soil carbon, the water-holding capacity is augmented by 20,000 gallons/acre, thereby reducing the risk of both flooding and drought while improving ecosystem resiliency.

Statistics only tell part of the story. Good Earth combines my photographs with interviews by Mary-Charlotte Domandi which are edited by Madison McClintock into succinct multimedia videos to shine a light on agrarians who are regenerating our unraveling landscapes.

Everyone who eats or tends even a small patch of land can play a role in improving our soils and all that depend on them. May these stories serve as positive examples for us all. 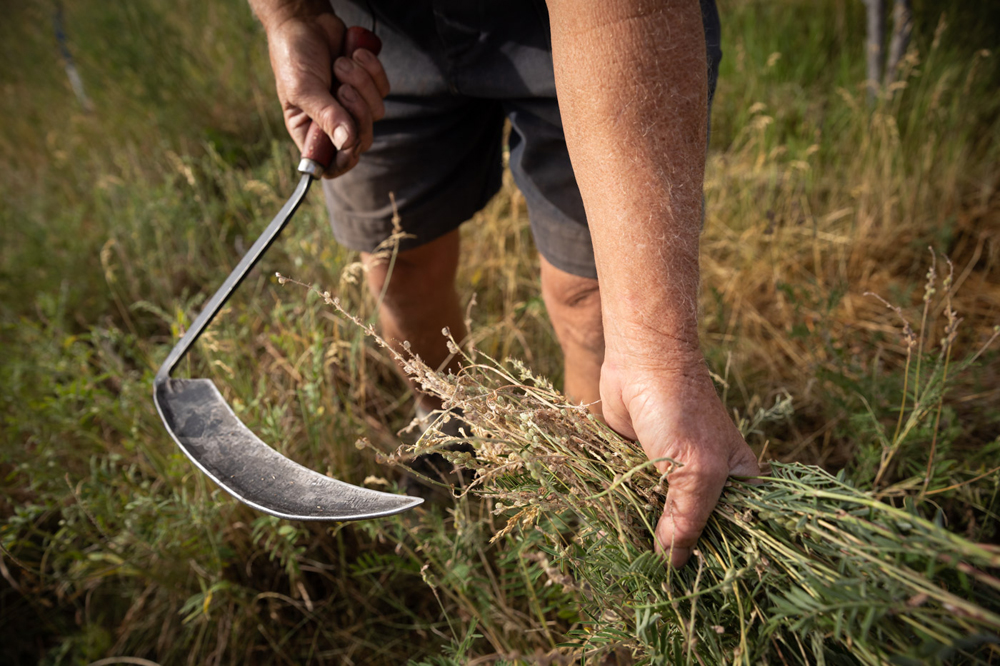 ©Esha Chiocchio, Gordon Tooley cuts forbs to harvest the seeds and spread them to other areas of Tooley’s Trees. Keeping the ground covered with diverse vegetation is an important aspect of creating a regenerative orchard where the soil is alive and teaming with life. 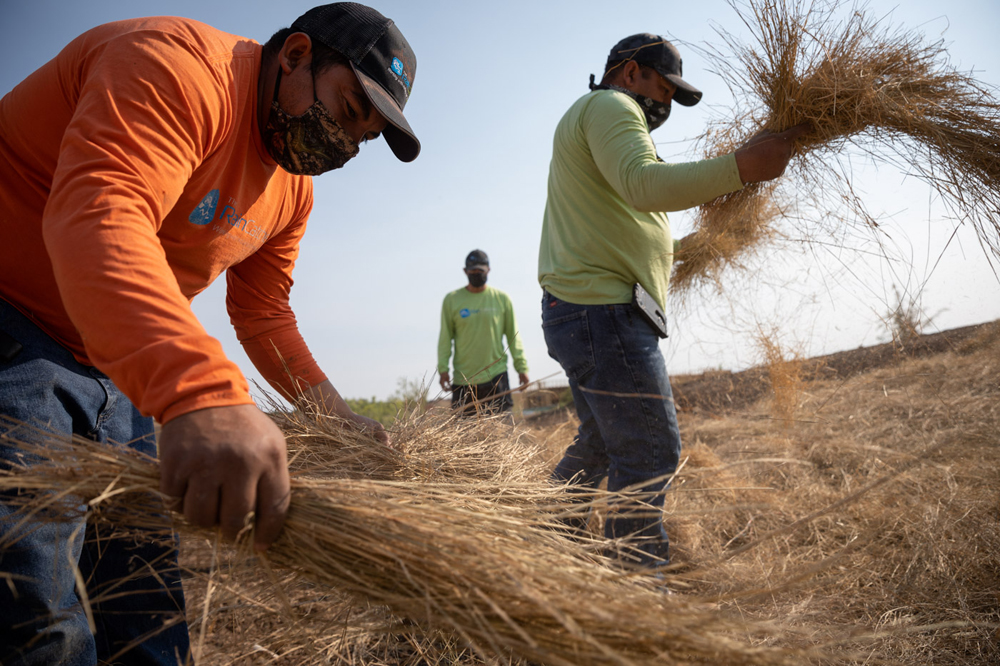 ©Esha Chiocchio, José Erazo and other employees of The RainCatcher spread fine straw over an area that has been seeded with wildflowers and grasses. By covering the seeds with mulch, the ground is protected from the harsh New Mexico sun and wind and can retain more moisture to give the seeds a healthy start. 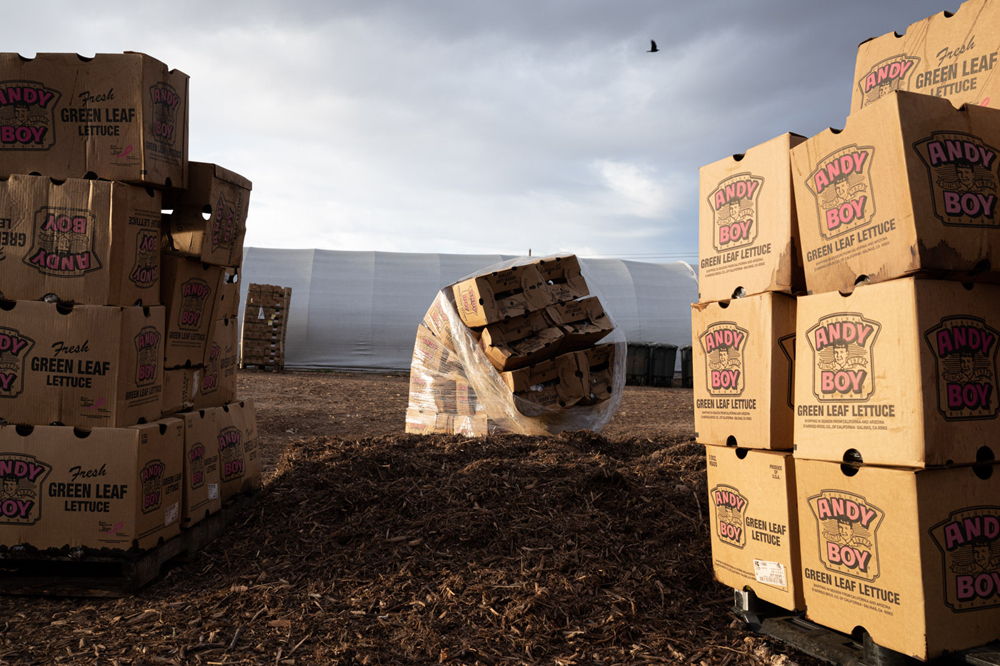 ©Esha Chiocchio, Boxes of spoiled lettuce wait to be composted at Reunity Resources in Santa Fe, New Mexico. Reunity works with food distribution centers, schools, restaurants, grocery stores and individuals to divert as much food waste as possible from landfills. When food waste goes into the garbage, it creates methane, a powerful greenhouse gas. When it is composted and added to soil, it draws carbon from the atmosphere and improves the quality of the soil – turning what would have been a liability into an asset. 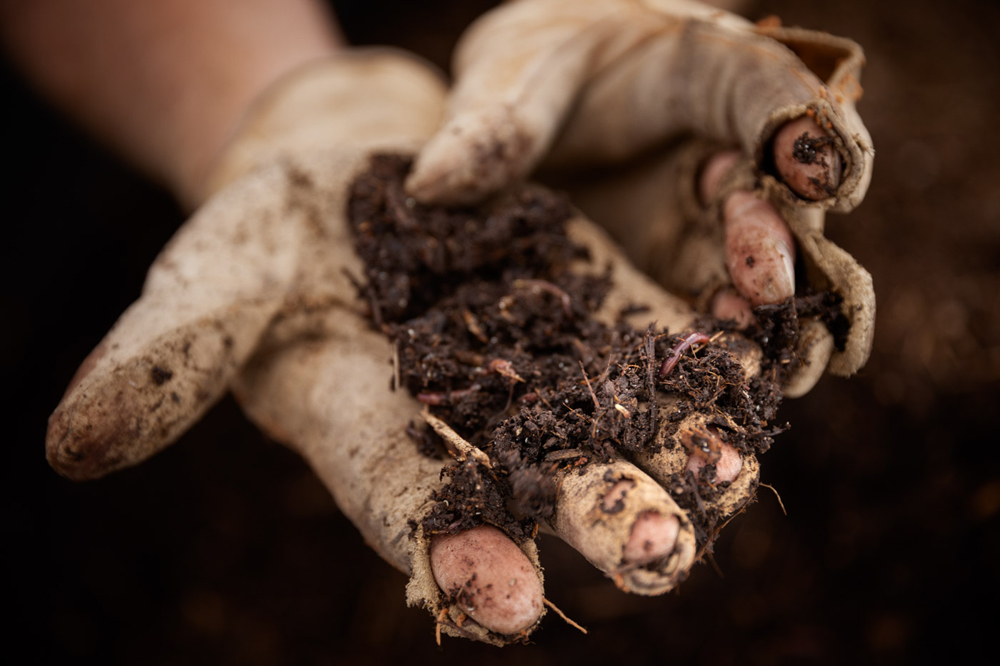 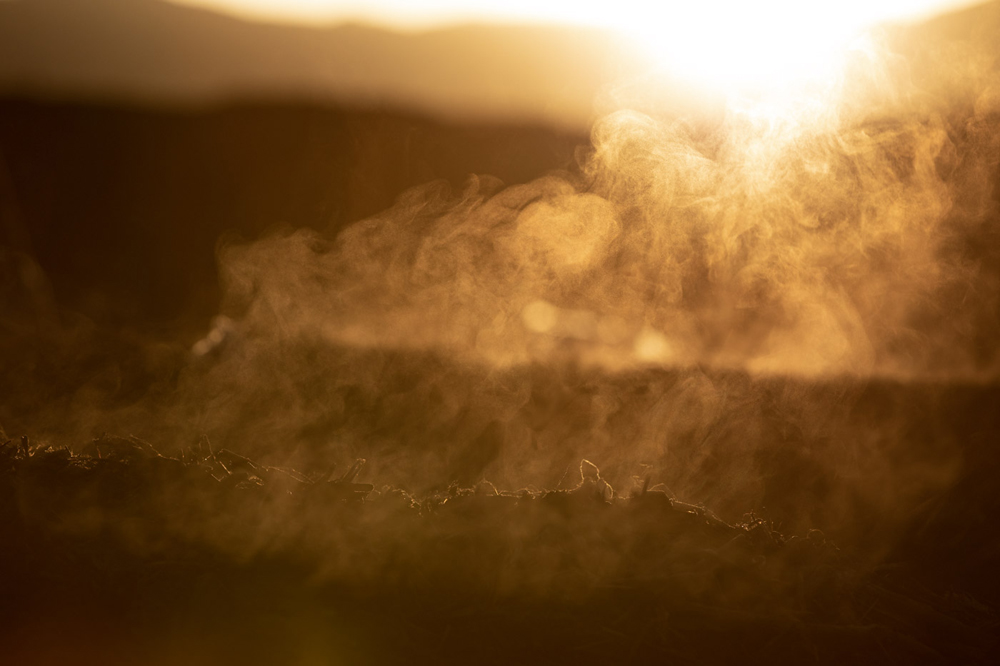 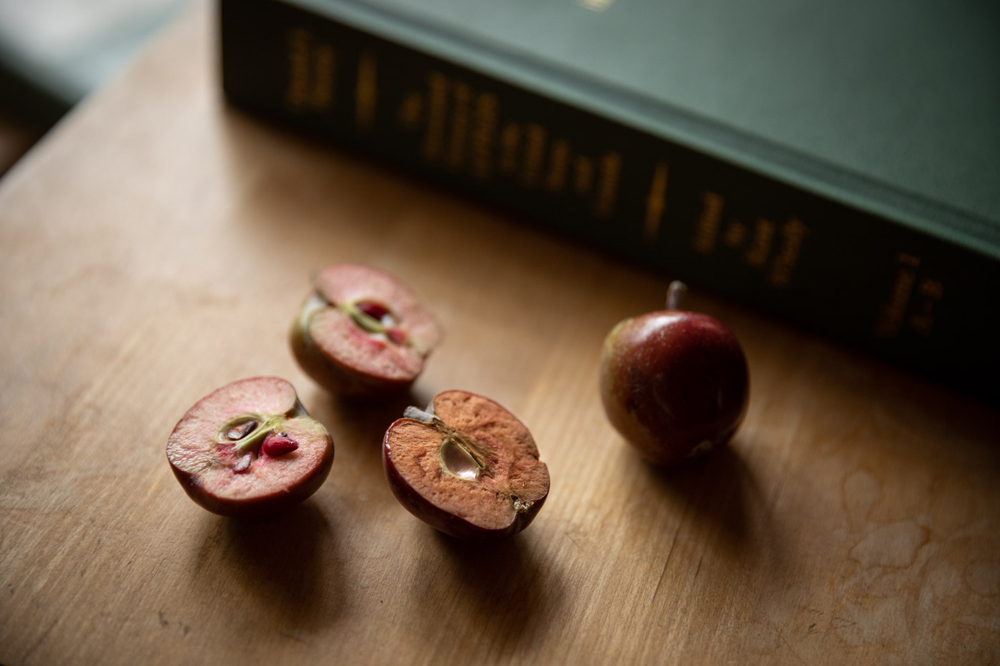 ©Esha Chiocchio, Gordon Tooley has been working for decades to preserve heirloom fruit varieties in his regenerative orchard in Truchas, New Mexico. This tiny apple turns beet red when ripe and was traditionally used to color sauces. 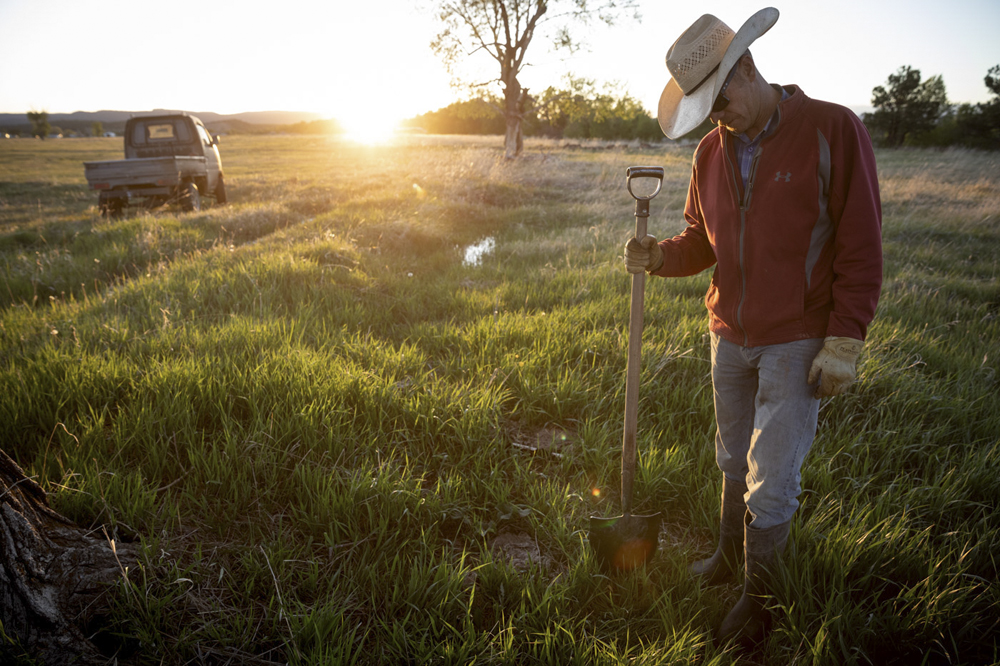 ©Esha Chiocchio, Tommy Casados inspects the grass as he flood-irrigates one of his pastures at C4 Farms in Tierra Amarilla, New Mexico. Tommy grazes fewer cattle per acre than most ranchers in this area as part of his effort to grow an abundance of healthy pasture with deep, resilient, carbon-cycling roots. 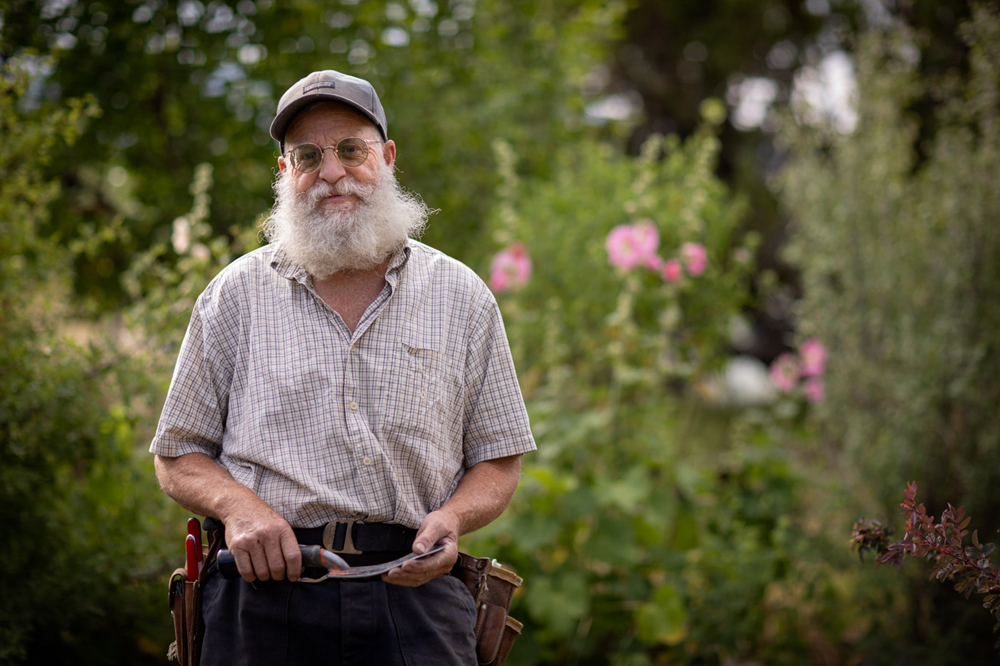 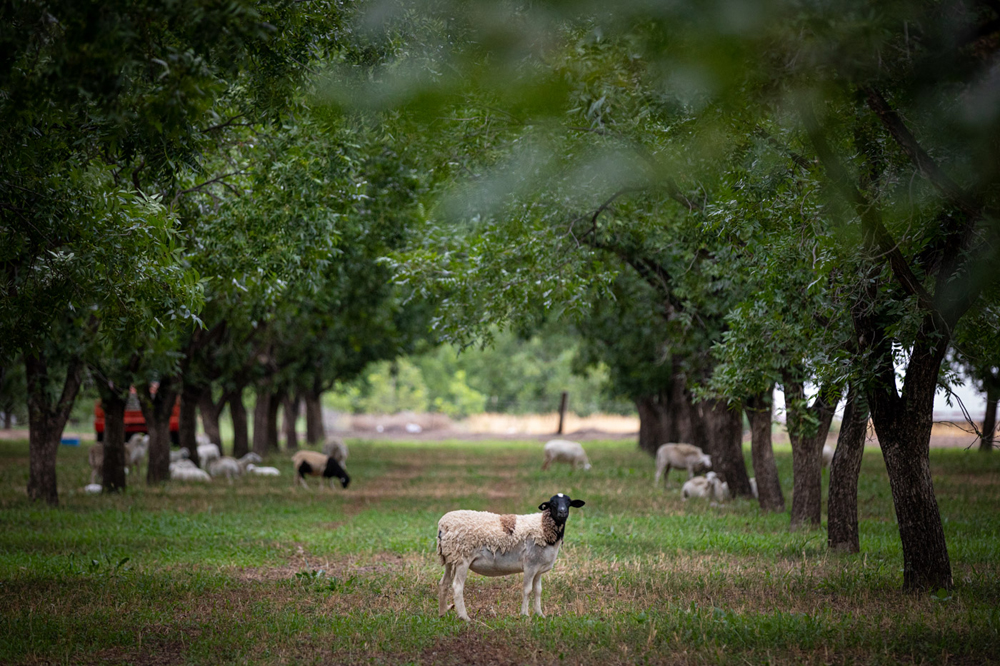 ©Esha Chiocchio, When Josh Bowman purchased this pecan farm three years ago, the soil was compacted and low in organic matter. Through the use of compost teas, grasses, and rotationally grazed sheep, his yield has increased in both quantity and nut size, thereby increasing his revenues while improving resilience. 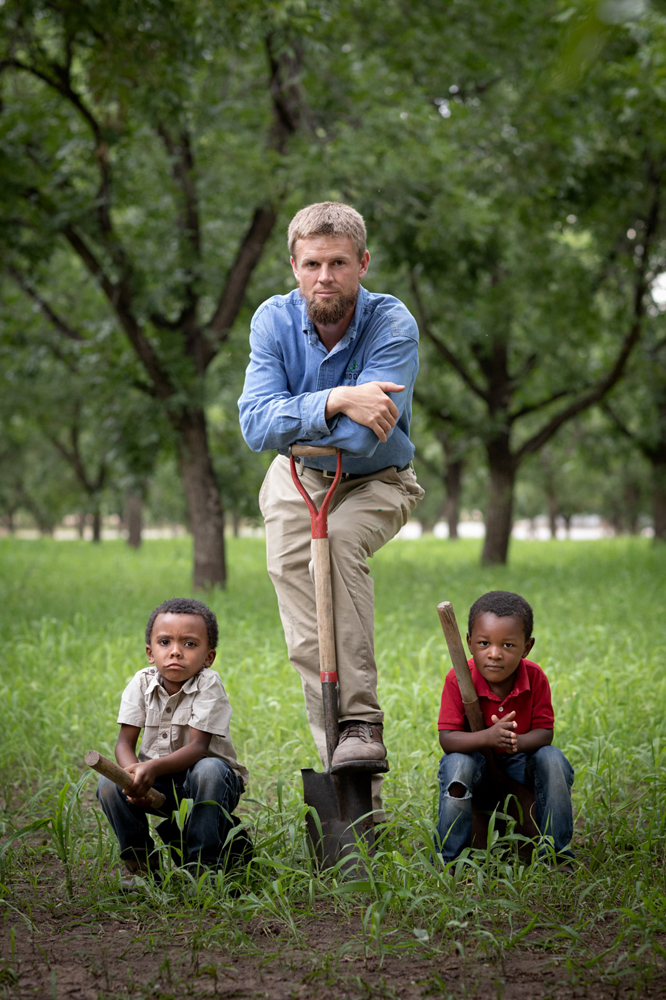 ©Esha Chiocchio, Josh Bowman and his sons Ephraim and Emerson have an evening ritual of taking their shovels into their pecan orchard to see how many earthworms they can find. Earthworm numbers have steadily increased as they have integrated regenerative practices that put an emphasis on increasing soil organic matter (carbon). 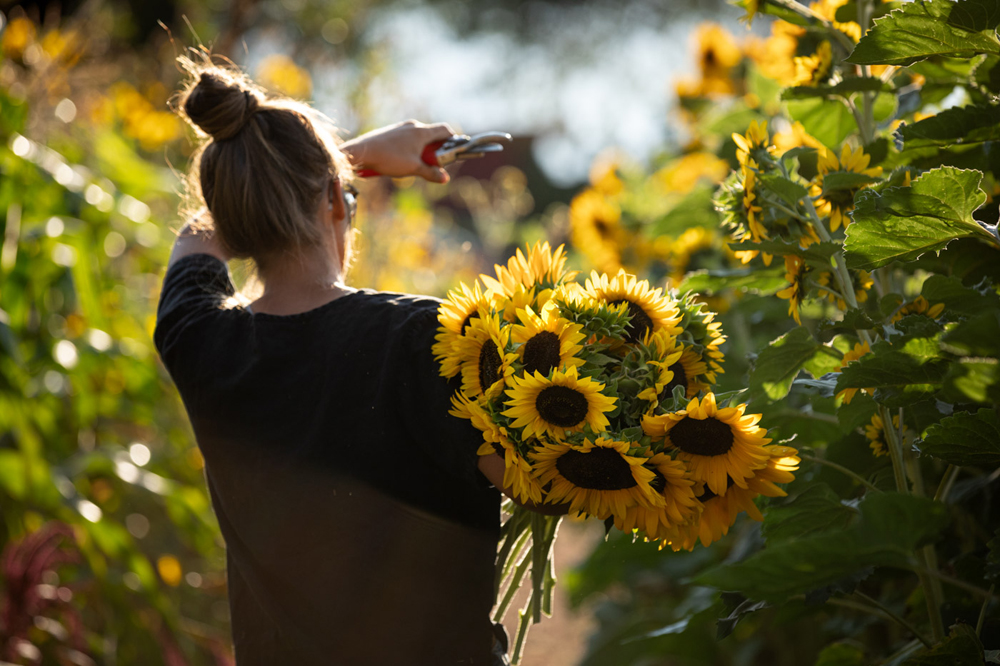 ©Esha Chiocchio, Janelle Plummer harvests sunflowers to sell at the Reunity Resources Farm Stand. Flowers are grown around the perimeter to encourage beneficial insects and birds to frequent the farm. 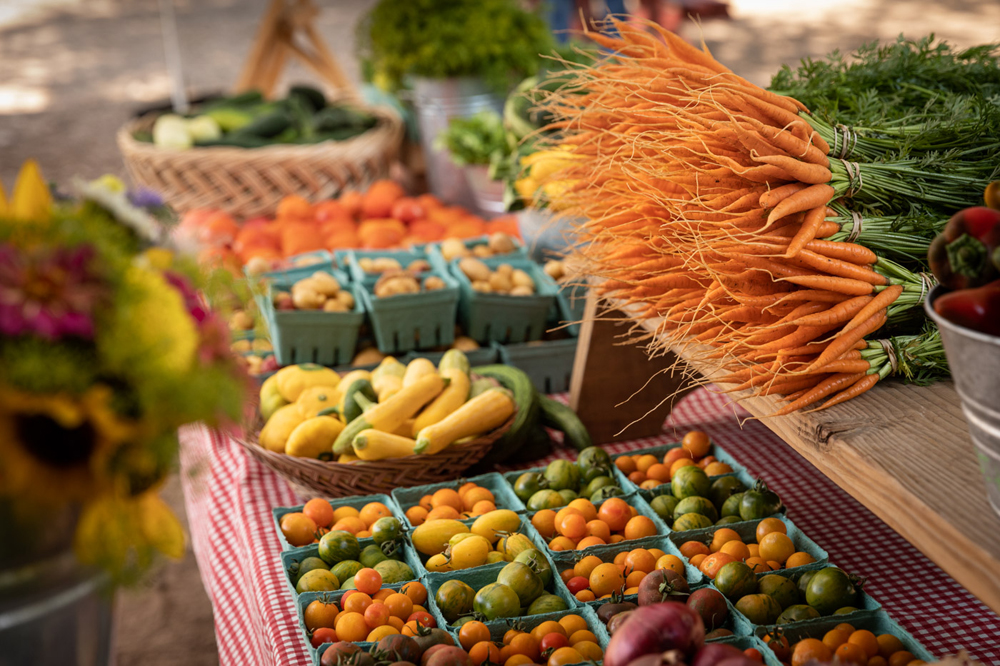 ©Esha Chiocchio, The Reunity Resources Farm Stand boasts a wide variety of fruits and vegetables grown with compost from the food scraps of Santa Fe’s restaurants, schools, food banks, and residents. Part of their mission is to feed the hungry and they donate hundreds of pounds of food per year to those in need. 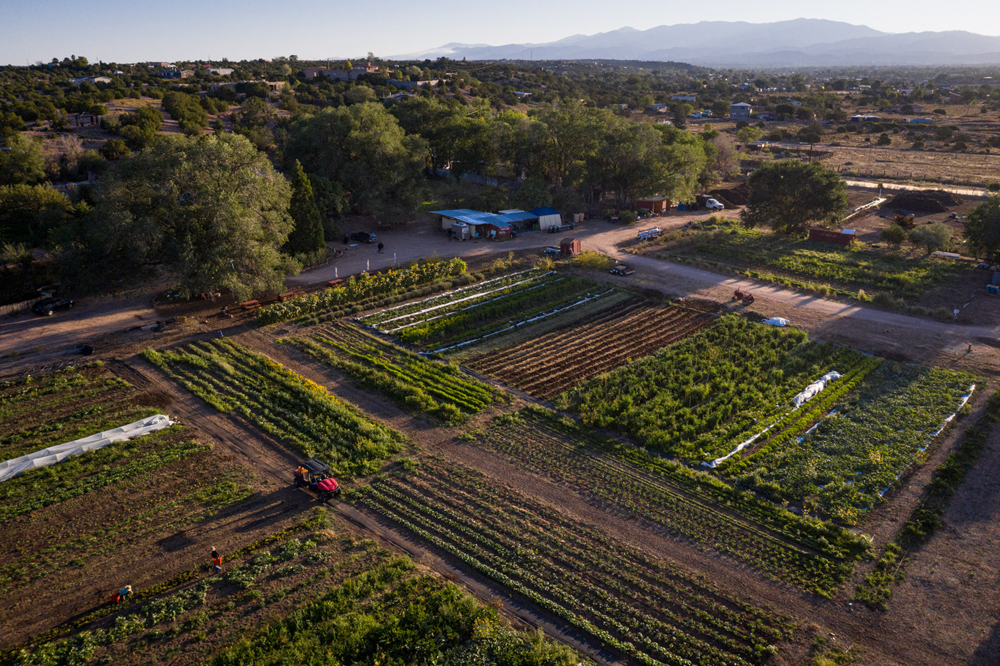 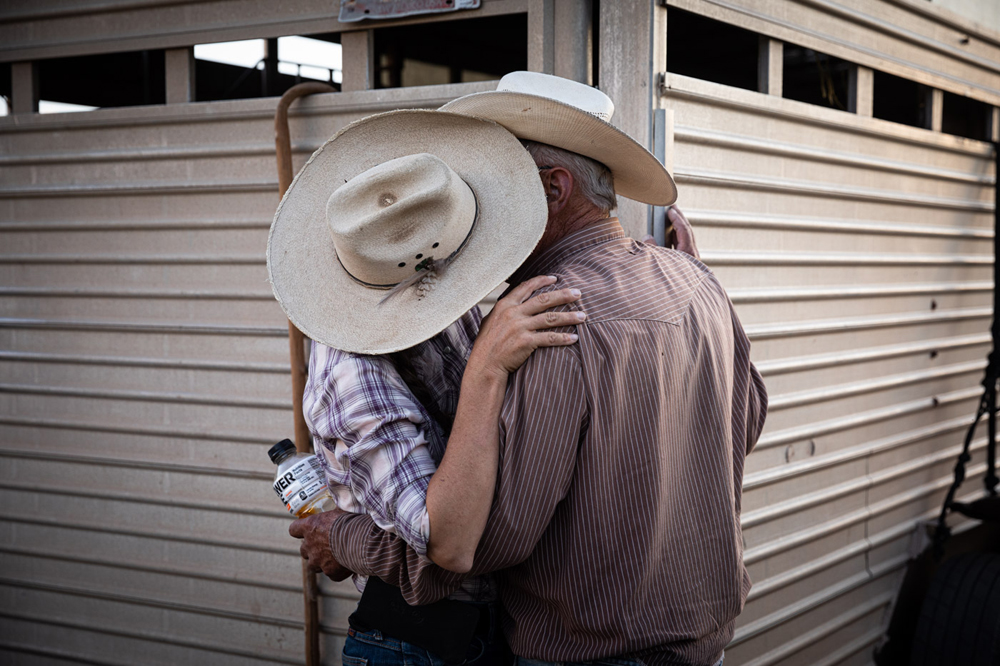 ©Esha Chiocchio, Amanita and Tom Berto share a quick kiss next to their goat trailer. They were hired to bring their herd of goats and sheep to La Cienega, NM to reduce the risk of fire by having them eat areas that are overgrown and have too much dead plant material.