Pennsylvania photographer, Vicki DaSilva has been working with light since the 1980’s and recently opened a solo exhibition of her light graffiti work at Able Fine Art in New York City. The exhibition, curated by Jill Conner, runs from June 23rd through August 30th and features photographs of her painted (with light) texts and bands of color captured in an abandoned silk factory. She is exhibiting both C-prints mounted on aluminum as well as 55″ LED HD LCDs with revolving diptychs and triptychs.

Vicki has a long history in photography, having worked as a photo editor for numerous publications while continuing her own exploration of light and photography. “My photographs are single frame time exposure light paintings shot at night, live and on location. These images are made possible through processes of recording that are unique to photography. The execution time varies in duration from minutes to hours per photograph.LightGraffiti was the starting point for my work back in the early 80’s. I embrace light graffiti today as a way to make social and political commentary text based images. The process is a combination of intervention art and environmental graffiti.” 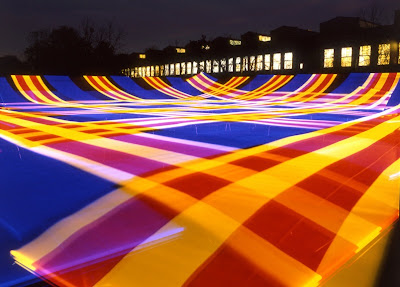 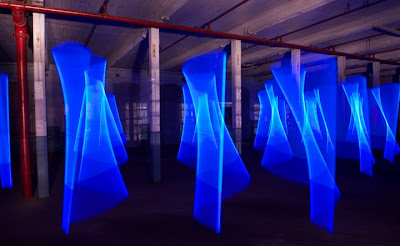 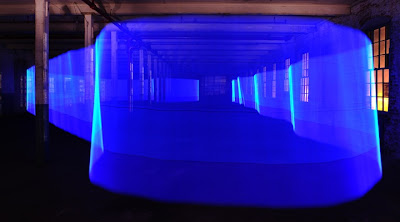 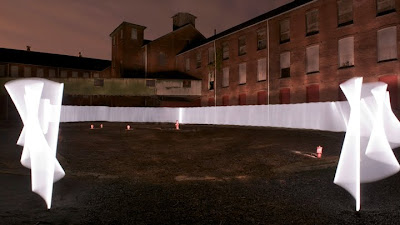 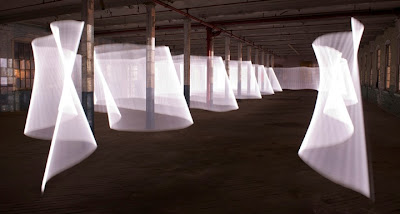 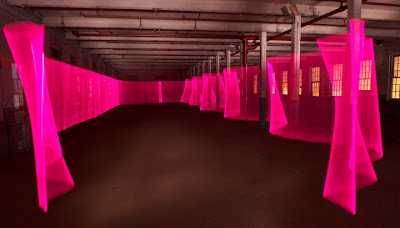 Ideas Behind the Text: The ideas behind the light graffiti text photographs in this exhibition are centered on social and political commentary that collides art world references with real world locations. The text is intentionally humoristic in some, and very serious in others. The challenge of drawing and writing text with light graffiti is to execute legibility. In certain images the deterioration of legibility ensues with the camera’s perspective allowing for a purely abstract line to appear creating interplay between the actual and the magical act of writing and drawing in a three dimensional space for a two dimensional photograph. The fact that it is not possible to see what the camera is recording while I am drawing requires a repetitive persistence to achieve the intended result of each photograph. 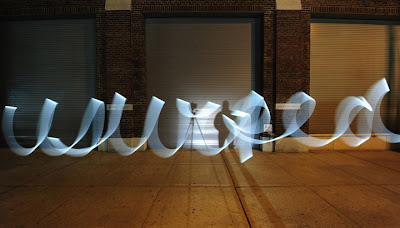 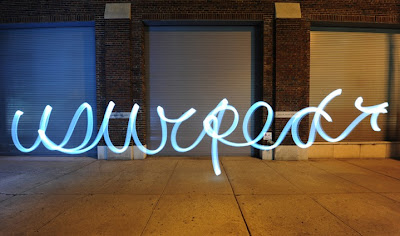 Usurped is the term used in the decision by US District Judge Deborah Batts in the copyright infringement lawsuit by Patrick Cariou against Richard Prince, Gagosian Gallery, Inc., Lawrence Gagosian and Rizzoli International Publications, Inc. Judge Batts said that Cariou’s potential market had been “usurped”. The location is in front of Gagosian Gallery at 555 West 24th Street in NYC. 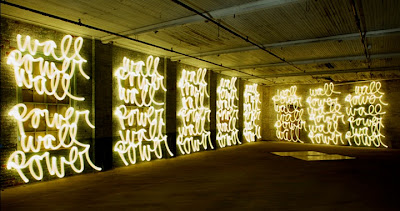 Jasmine/Never Sorry (for Ai Weiwei) and Jasmine/Wall Power (for Ai Weiwei) references several events and topics starting with the well-known artist and the documentary film being made by Alison Klayman titled Ai Weiwei: Never Sorry, the first feature-length film about the internationally renowned Chinese artist and activist. As graffiti has at its core an authority defiant driven motivation, my idea was to cover the two walls with the words ‘never sorry’ using a pale yellow lamp to reference the color of the Jasmine flower and the Jasmine Revolution of 2011. Ai Weiwei posted a tweet on Twitter February 24, 2011 saying: “I didn’t care about jasmine at first, but people who are scared by jasmine sent out information about how harmful jasmine is… which makes me realize that jasmine is what scares them the most.” While making this work in the dark I thought very intensely about his detention, interrogation and suspected abuse and torture. The words ‘wall power’ reference an individual artwork’s power when hung on a wall. Since Ai Weiwei’s detention, we see his work with a renewed power as his life and his art are so intertwined. Wall power is also used to describe that discernible yet often undetectable attraction to a work of art as well as its actual monetary value or potential monetary value. 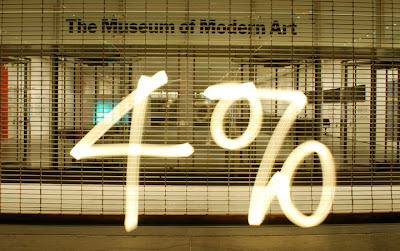 4% of Women Artists (for Jerry Saltz) refers to the art critic Jerry Saltz’s Facebook thread and subsequent meeting with Ann Temkin, Chief Curator of MoMA’s department of painting and sculpture regarding the mere 4% of women artists represented on floors four and five of the permanent collection in 2009. That was a fact I was unaware of, but did not surprise me. It did inspire me to make the photograph. The gate adds a symbolic enforced lock out. 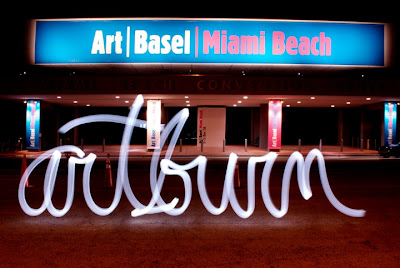 Artburn was made as a humoristic comment about being overly saturated with visual art in a short duration of time, as is often the case during art fairs. 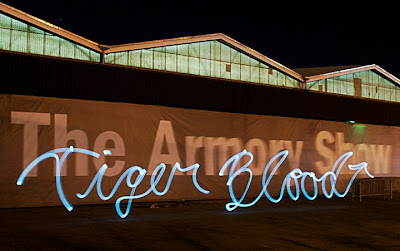 Tiger Blood is a collision of art world meets celebrity news via actor Charlie Sheen’s sensational media coverage. The photograph was made on the opening night of The Armory Show in NYC, March 2, 2011. Charlie Sheen gossip was rampant at the opening and it seemed a perfect light graffiti coup to write Tiger Blood (Charlie’s self described super human potency) in front of the sign. I was thinking about the ever constant collision of art, history, pop culture, icons, celebrity, status, bad behavior, ego, drugs, money, drive, determination, social media, all media, gossip, enemies, vengeance, violence, war, competition, friends, family, parenthood, relationships, love, passion and riding the fine line between sanity and insanity, between life and death.