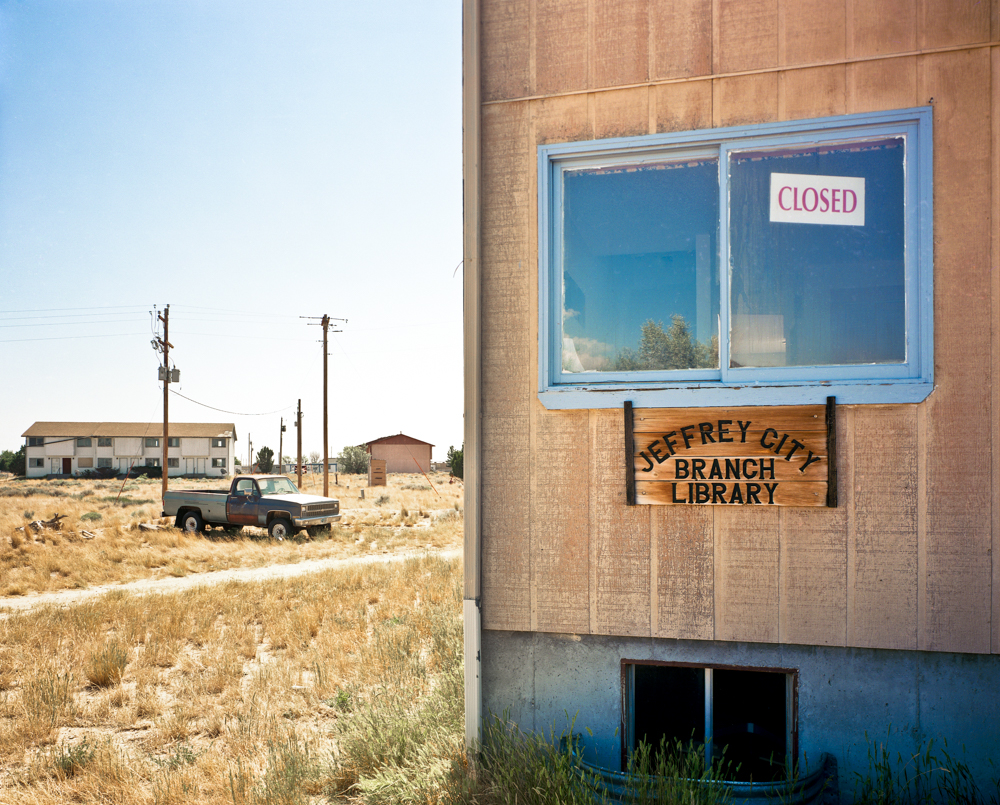 ©Robert Dawson, Abandoned library in abandoned town, Jeffrey City, WY 2012, Jeffrey City is a former uranium mining boomtown located in the central part of Wyoming. The town is a symbol of a boomtown that went “bust”, as the mine was shut down in 1982 and over 95% of the inhabitants left the town within 3 years. The population was 58 in 2010.

“Robert Dawson’s work is an irrefutable argument for the preservation of public libraries. His book is profound and heartbreakingly beautiful.” – Toni Morrison

In November, photographic artists, educators, and students in the West and Southwest will convene in Lake Tahoe for the Society of Photographic Educators regional retreat. One of the highlights of the event will be to celebrate long time photographer and educator Robert Dawson as the Honored Educator of the SPE West chapter.  This well deserved honor comes from decades of considering place, resulting in seven books and numerous prestigious awards, including receiving the Guggenheim in 2014. That fellowship allowed Robert and his wife to examine, as he states, “one of the least literate places in the country – Stockton and San Joaquin County, CA.” The result was a three year project, Reading in the San Joaquin, that studied individuals and organizations bringing literacy to under served areas.

Robert’s focus on literacy goes back two decades as he has traveled throughout the United States “documenting hundreds of public libraries, large and small, old and new, urban and rural, in poor communities, and in wealthy ones”.  His book, The Public Library A Photographic Essay captures libraries across the country. As Bill Moyers notes in his forward, “Robert Dawson shows us in this collection what is at stake: when a library is open, no matter its size and shape, democracy is open, too.” The book includes a forward by Bill Moyers, an afterword by Ann Patchett, and essays, letters, and poetry celebrating libraries by Philip Levine, Anne Lamott, Amy Tan, Barbara Kingsolver, E.B. White, Isaac Asimov, Charles Simic, and others.

His newest project, The Global Library Project, features over 80 libraries in northern and eastern Europe, Ukraine and Moscow. He is hoping continue this work in Italy, Greece and Israel looking at the role of libraries in the current migrant crisis. 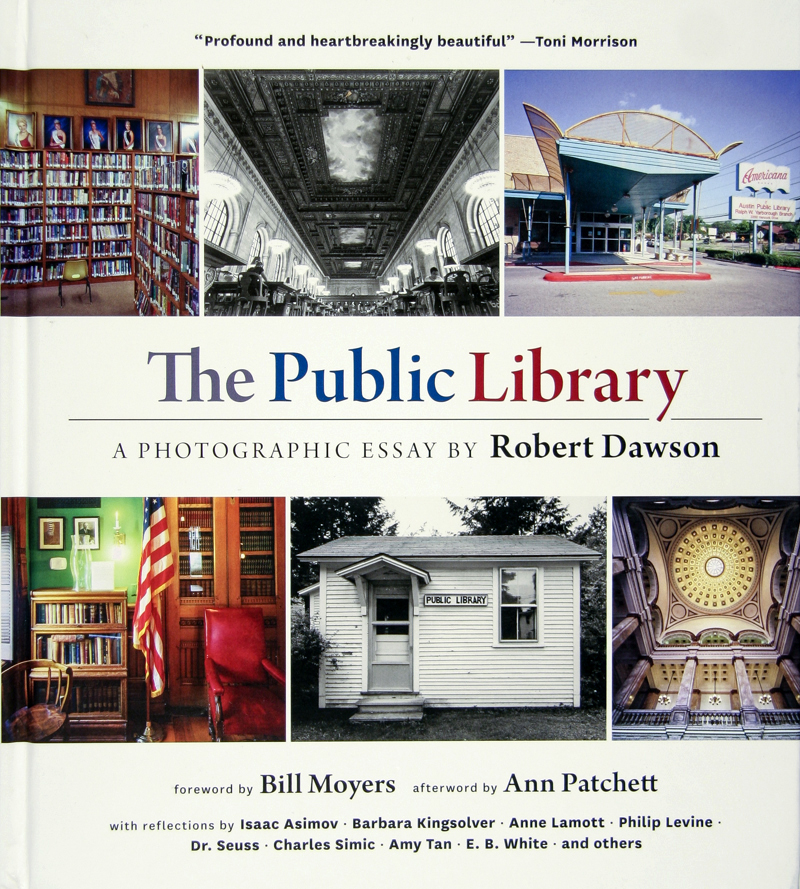 Robert Dawson’s photographs have been recognized by a Guggenheim Fellowship, a Graham Foundation Fellowship, a Creative Work Fund Grant, a Fellowship from the National Endowment for the Arts and the Dorothea Lange-Paul Taylor Prize from the Center for Documentary Studies at Duke University. His books include Robert Dawson Photographs (1988); The Great Central Valley: California’s Heartland (University of California Press, 1993); Farewell, Promised Land: Waking from the California Dream (University of California Press, 1999); A Doubtful River (University of Nevada Press, 2000) and most recently The Public Library: A Photographic Essay (Princeton Architectural Press, 2014). In 2015 the Library of Congress purchased his entire Public Library project for their permanent archive. He is the founder and co-director with his wife Ellen Manchester of the Water in the West Project. Dawson’s photographs are in the collections of the Museum of Modern Art, New York; the San Francisco Museum of Modern Art; the National Museum of American Art (Smithsonian Institution); The Center for Creative Photography at the University of Arizona; The Getty Museum and the Library of Congress. He received my B.A. from the University of California at Santa Cruz and his M.A. from San Francisco State University. Dawson has been an Instructor of Photography at San Jose State University since 1986 (now retired) and an Instructor of Photography at Stanford University since 1996. 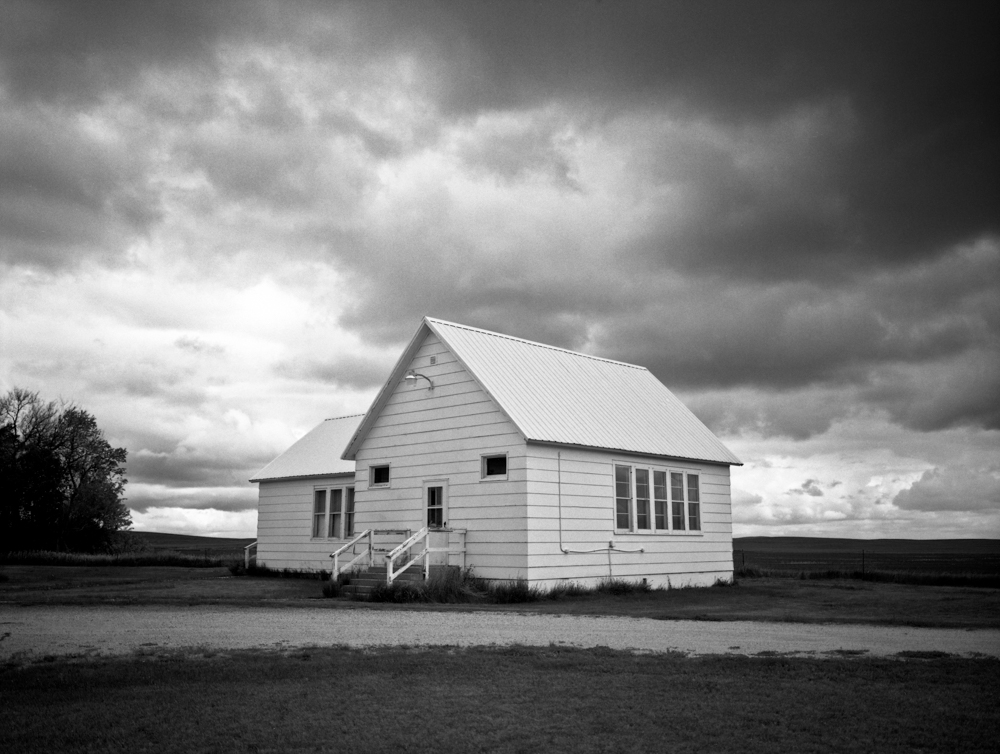 The Public Library
A Photographic Essay

The modern library in the computer age is in the midst of reinventing itself. What belongs in a library? In what form do we want to preserve information and culture? More books are being published than ever before yet library budgets are shrinking. More is also being demanded of our libraries as they move beyond being centers for books to becoming centers for community. People without homes often find libraries to be one of the few safe places as homeless shelters are cut back. Access to the Internet is increasingly necessary to function in our society and many people have only the library to connect to the web. 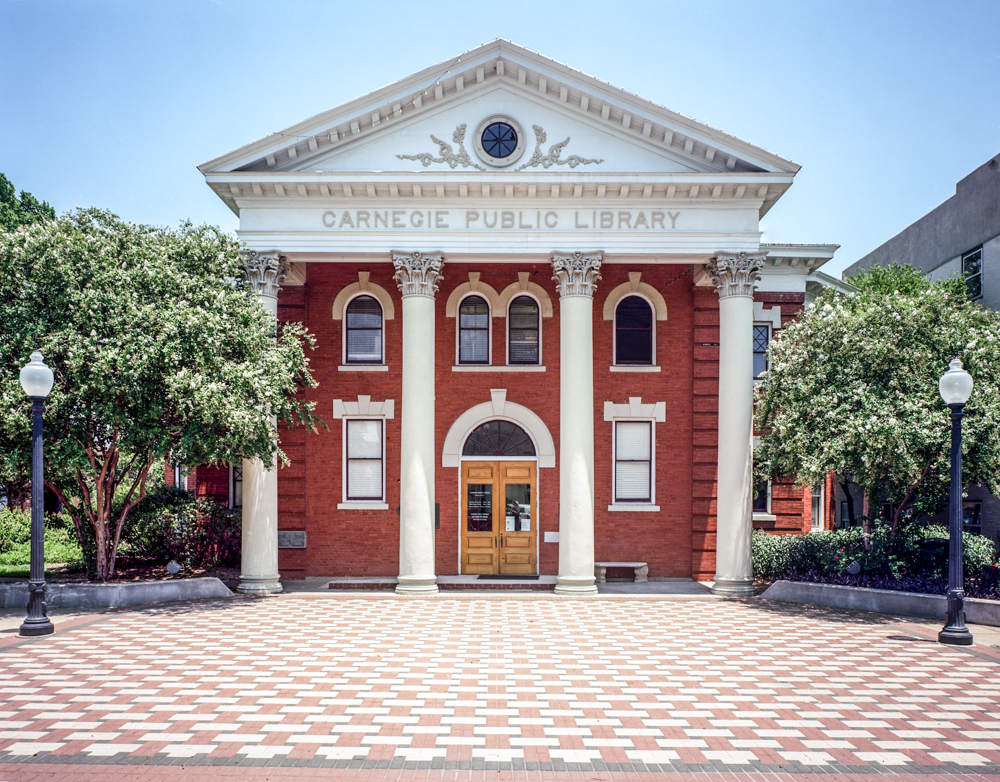 Libraries are local but I chose to view this astonishing system as a whole. While each library has its own unique set of needs the nation-wide system of local libraries constitutes an important part of a healthy society. In the nineteenth- century there was a strong correlation between the public library movement and the movement for public education. People understood that the future of democracy is contingent on an educated citizenry. They also felt that every citizen should have the right of free access to community-owned resources. These ideas coalesced into today’s public libraries which function as a system of non-commercial centers that help us define what we value and what we share. -Robert Dawson 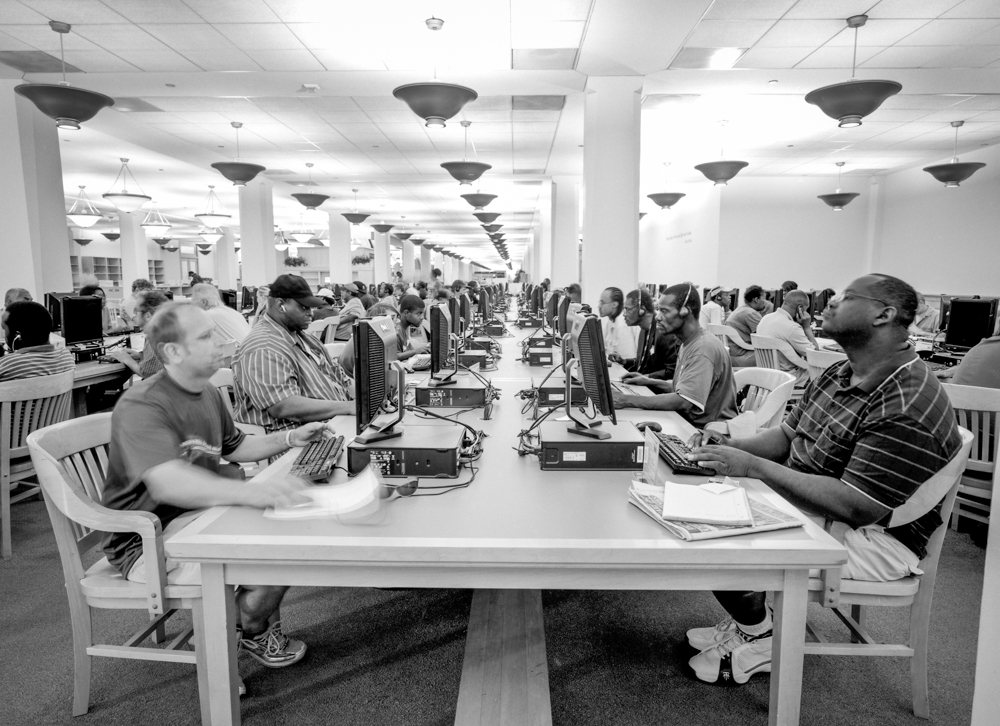 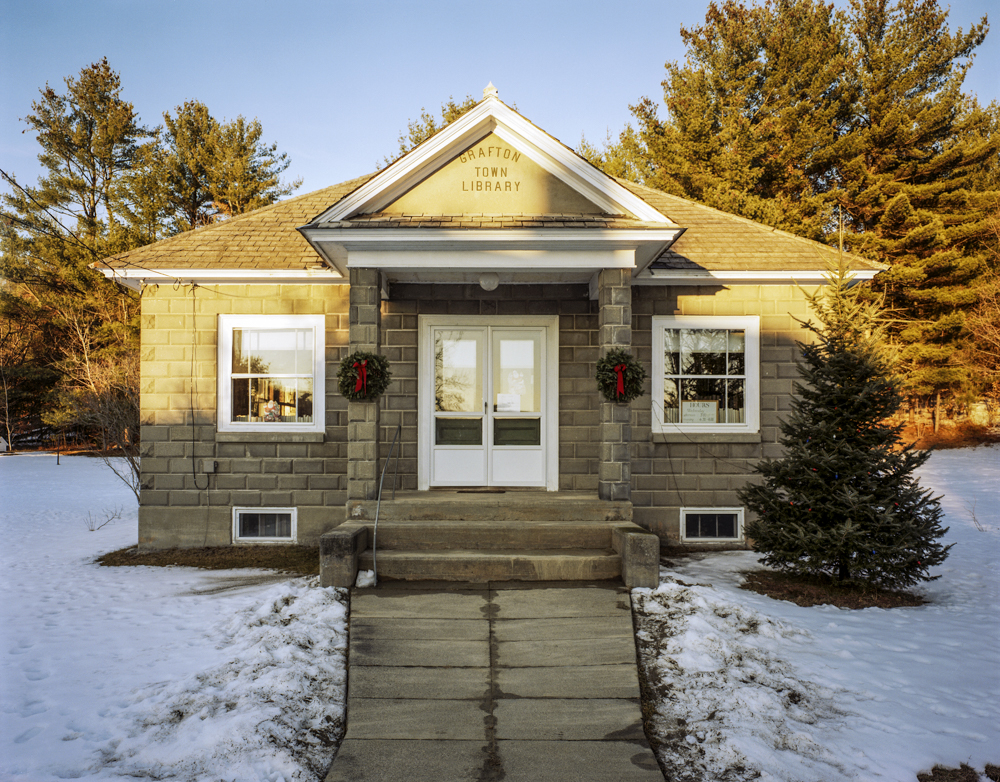 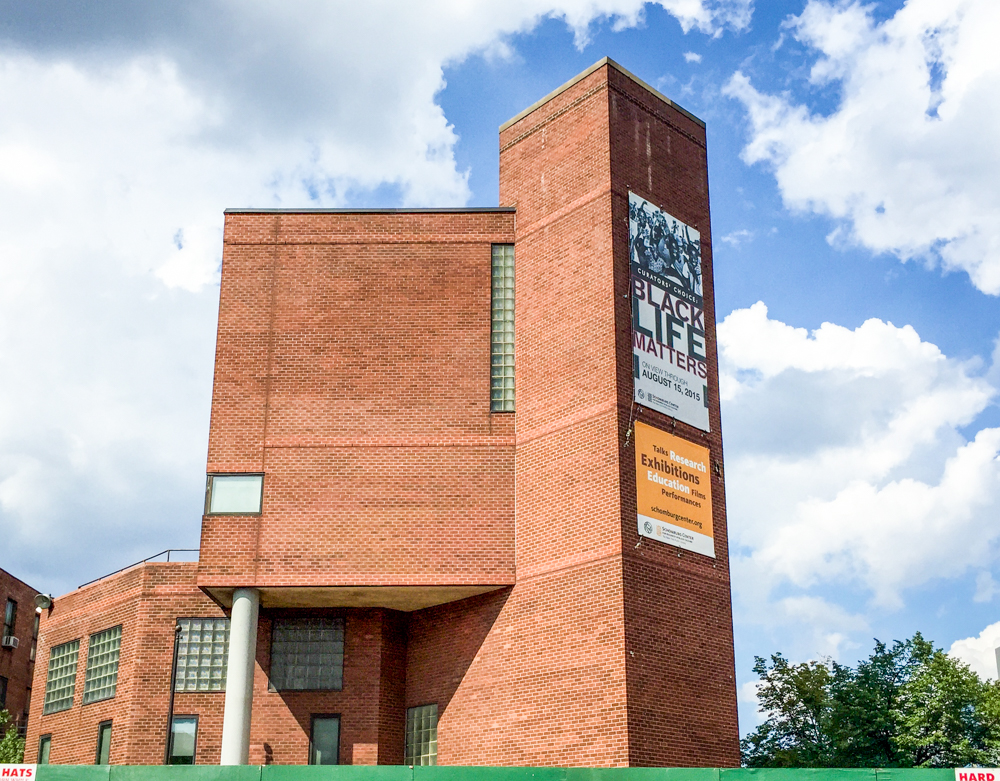 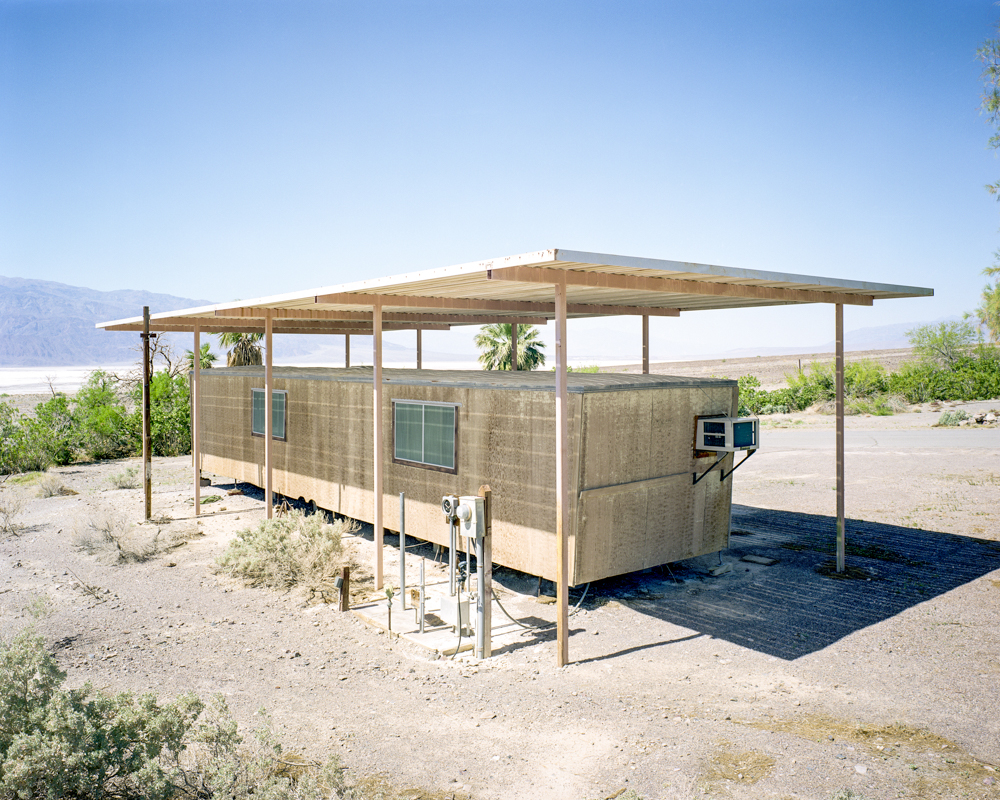 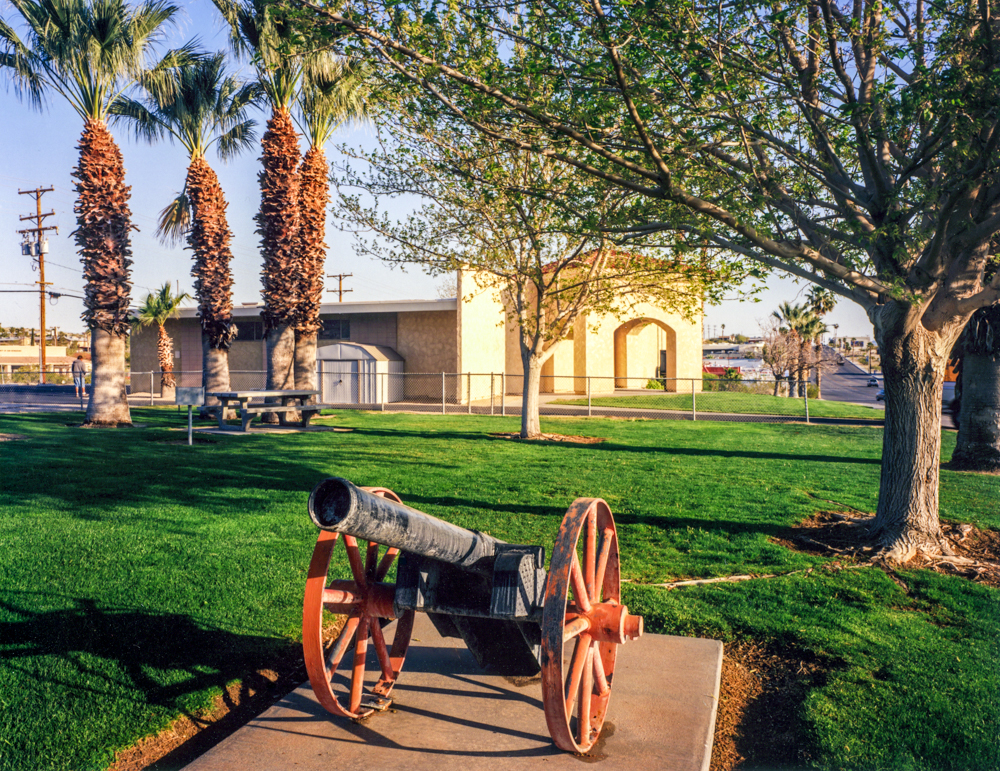 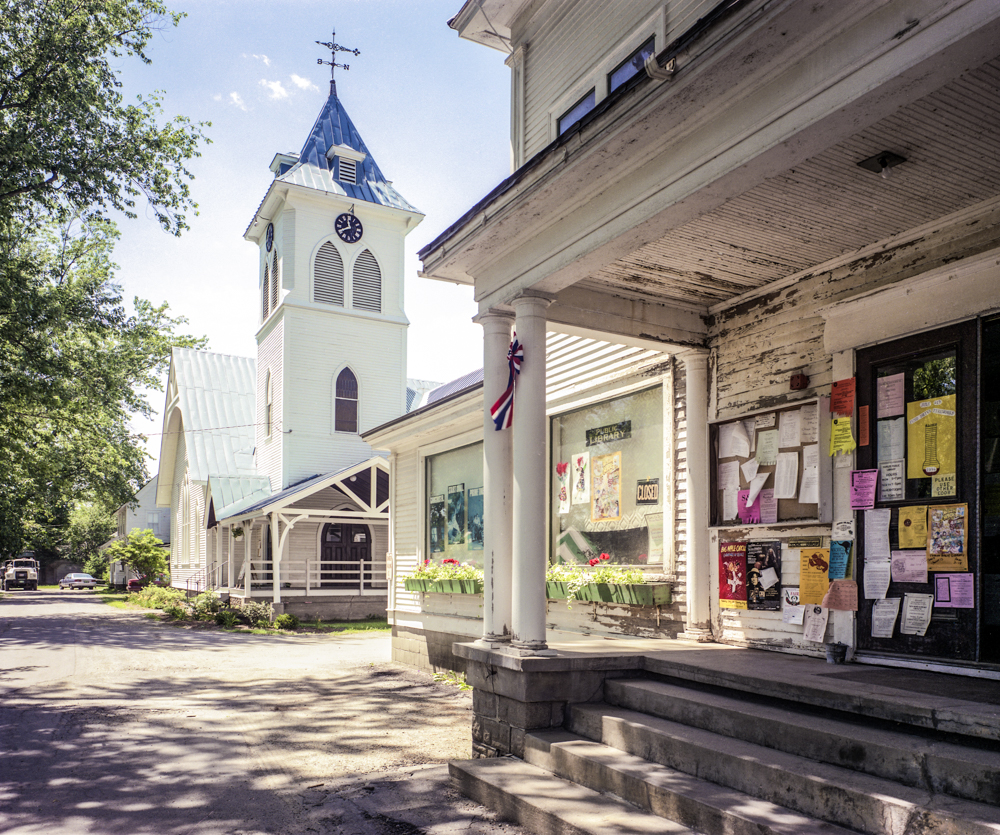 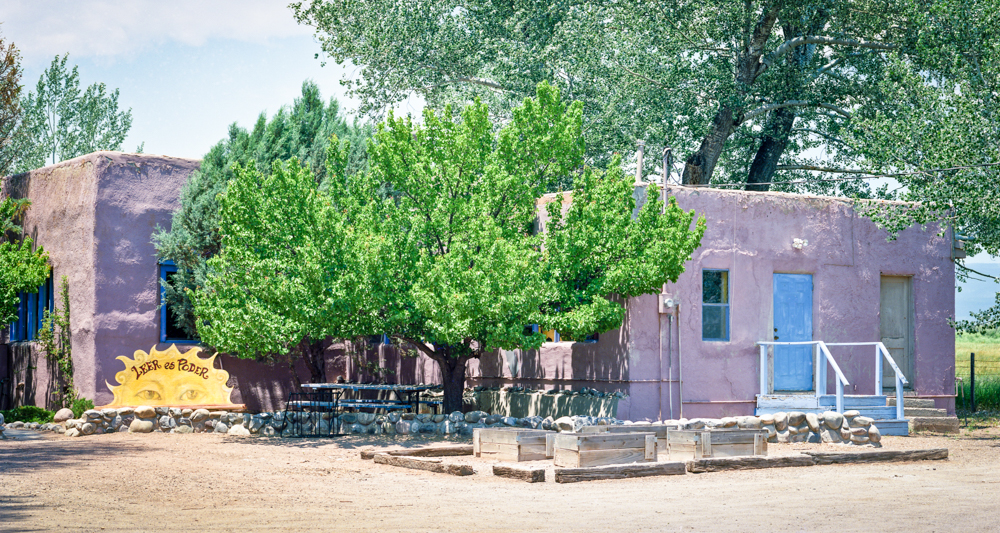 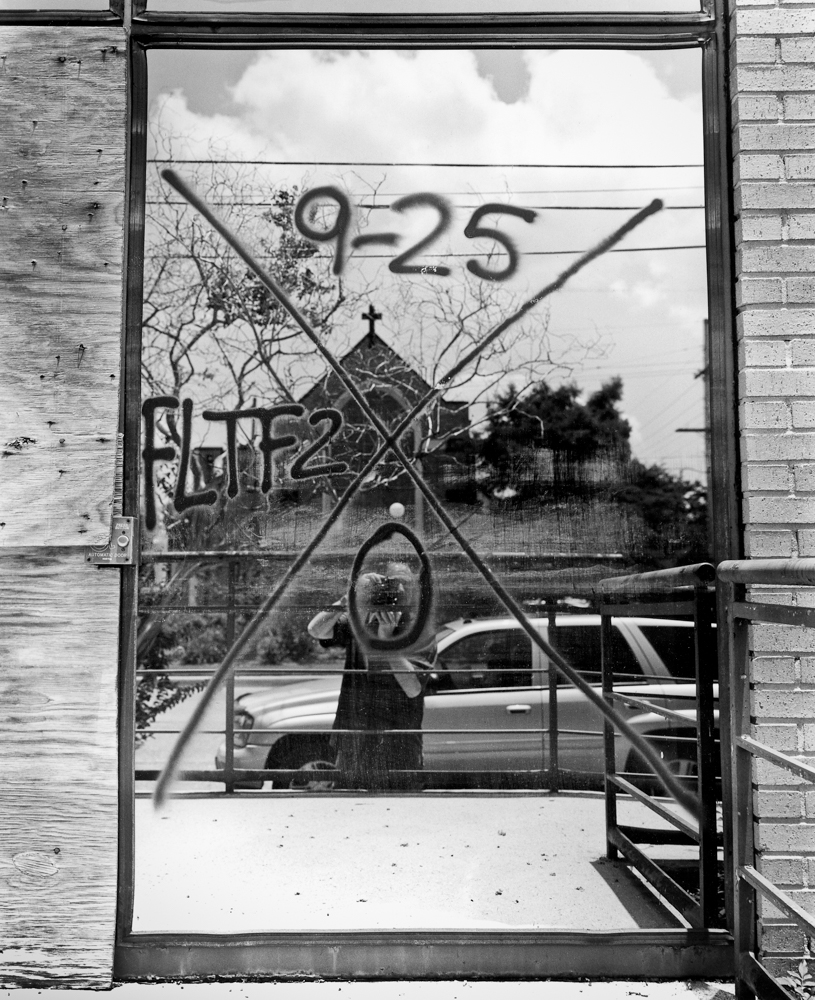 ©Robert Dawson, Katrina damaged library, New Orleans, LA 2008, When the levees broke, all of New Orleans’ thirteen public libraries were damaged, eight so badly they could not be reopened. More than 300,000 books, CDs, and other items were destroyed—nearly half the collection. With the devastation of the city and the crippling of city government, NOPL was forced to lay off 90 percent of its employees. All libraries were closed for over two months. The 19 remaining staff members, when they were able to re-enter the city, began surveying damage and salvaging assets. The devastation was an opportunity to rebuild a better library system. 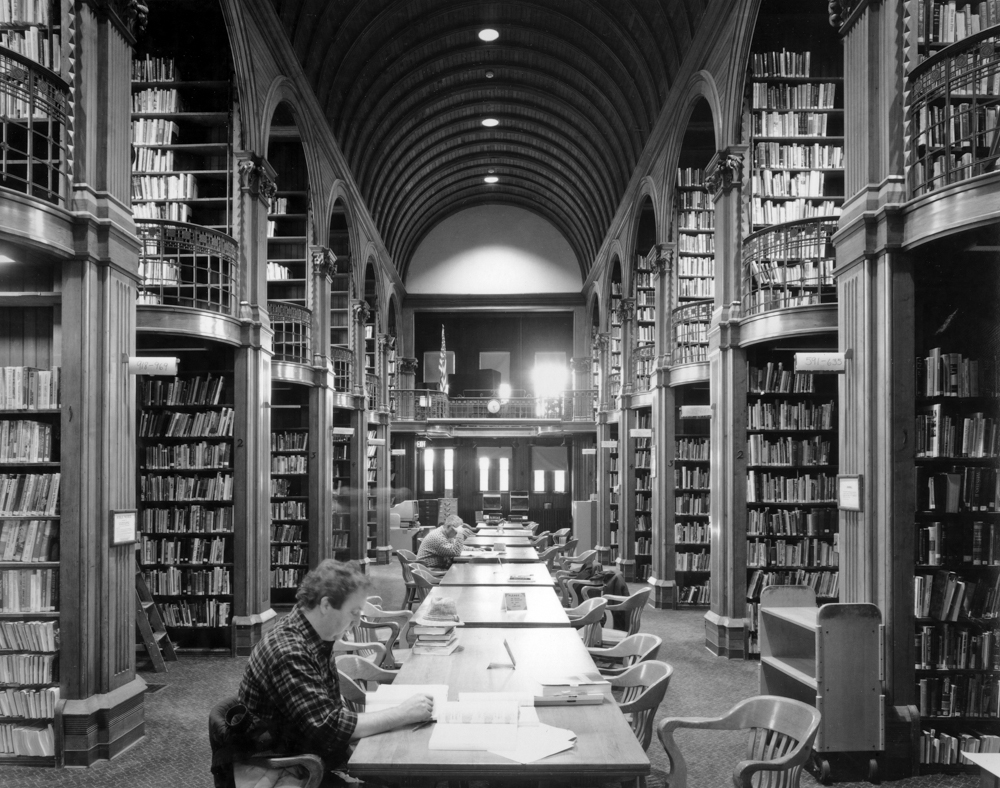 ©Robert Dawson, Reading Room, Woburn Public Library, Woburn, MA 1994 After a large bequest by Charles Winn to the town of Woburn in 1876, the famed American architect Henry Hobson Richardson was selected to design his first library. The Woburn Public Library is now a National Historic Landmark. 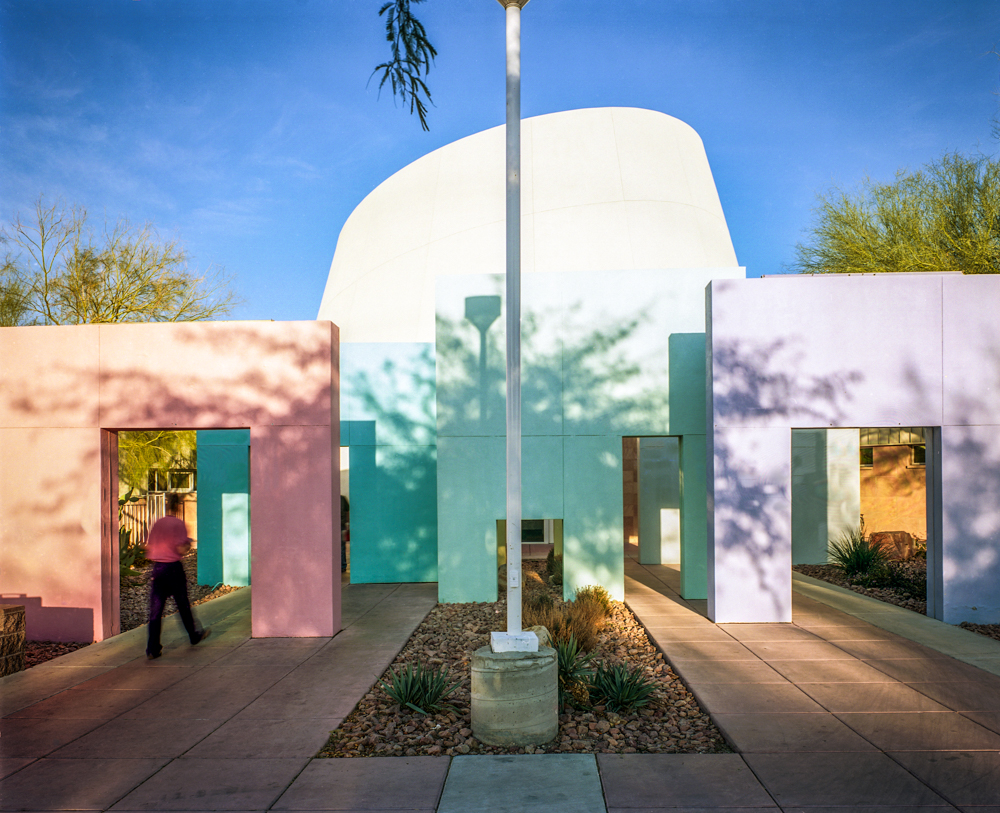 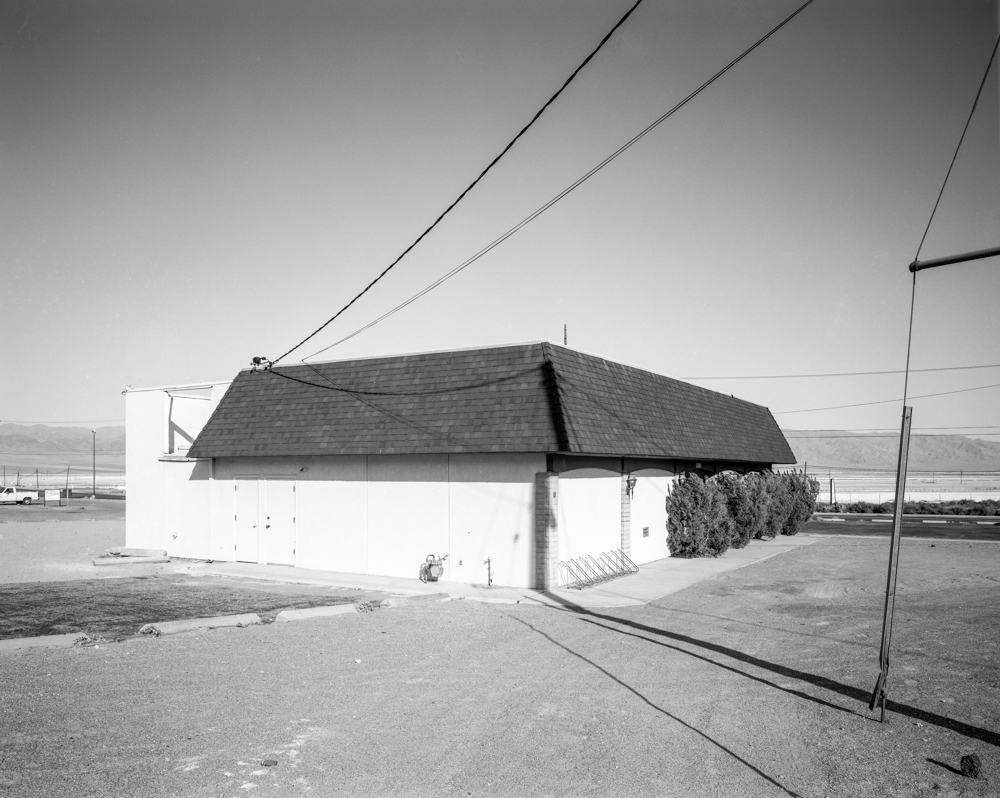 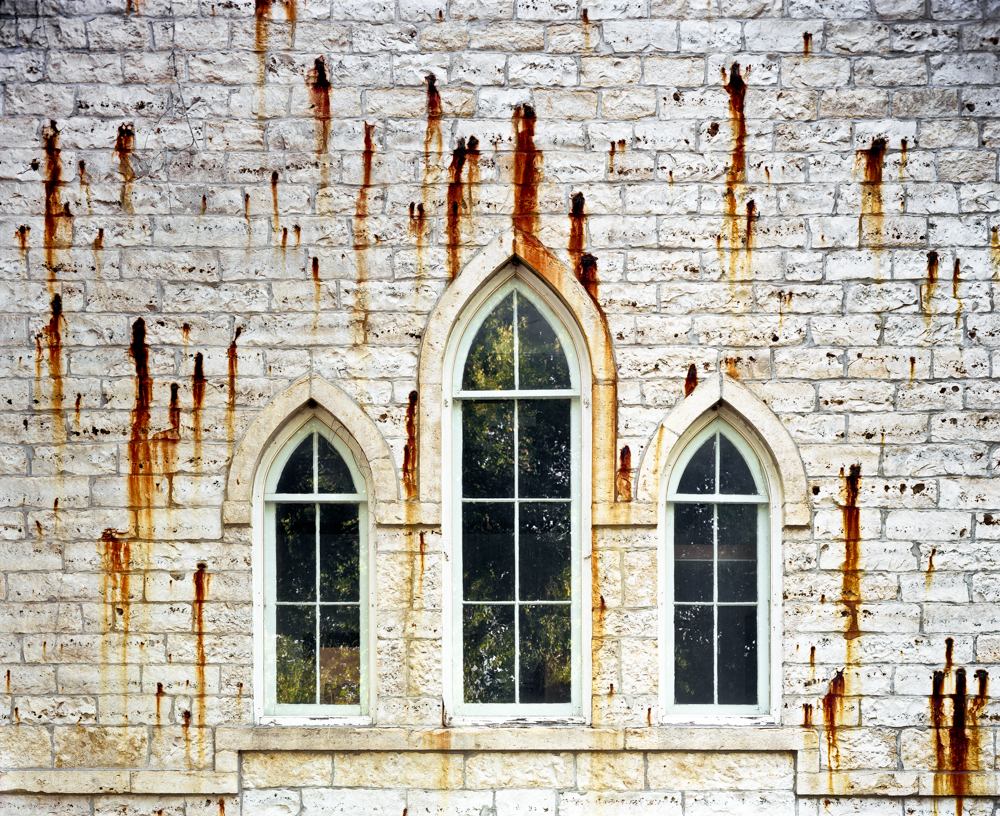 ©Robert Dawson, Library, Weeping Water, NE 2012 This library was originally built as a church before becoming a public library. The old limestone rock walls exuded rust colored stains that made the closed library look like it was weeping blood.