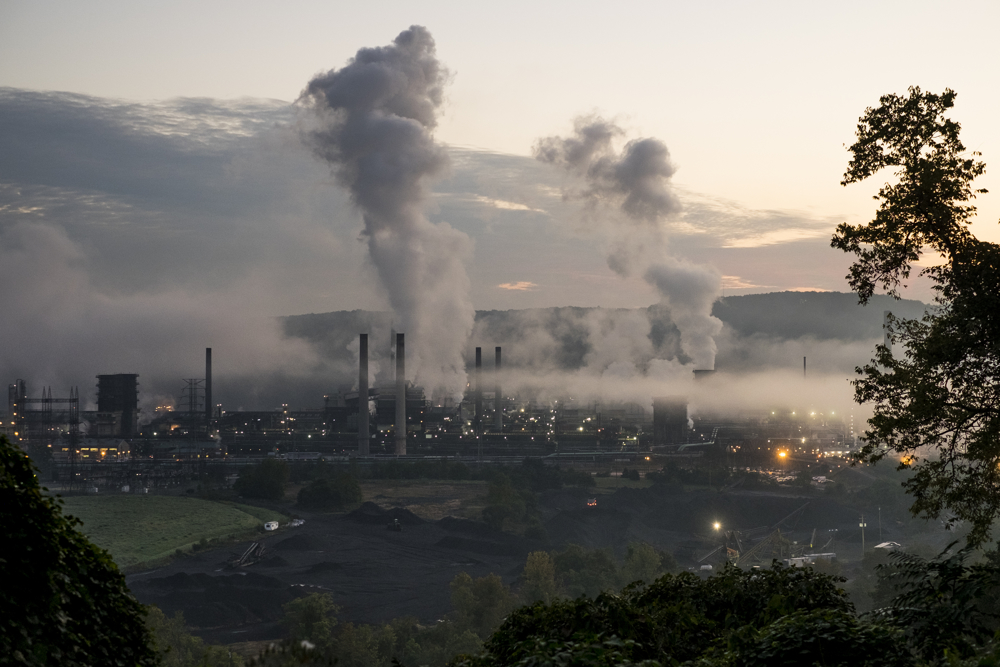 ©Pete Marovich, Clairton, Pa., is home to US Steel’s Clairton Coke Works which is the largest coke manufacturing facility in the United States. Like many other steel industry towns in the Monongahela River Valley, the decline of the steel industry in the 1980s had a severe effect on the town’s employment and tax base. The coke works sits in a valley created by the Monongahela River and the topography tends to trap the heavier-than-air pollution from the plant. As a result the plant has been fined more than $3.9 million in penalties since 2009 for exceeding limits on air pollution. An administrator at the Clairton City School District has said about half of the kids in the K12 school system are dealing with asthma.

Continuing with our series of looking at America, photojournalist Pete Marovich‘s project, Searching for Dream Street, documents small towns in Pennsylvania that suffered from the collapse of the steel industry, a subject that has personal meaning. Growing up with stories about thriving communities of immigrants, supported by mill jobs, Pete examines the realities of places built on long forgotten dreams.

Pete writes about his project:

In 1955, when renowned photojournalist W. Eugene Smith was creating the images of Pittsburgh that would eventually become a book called Dream Street, Pittsburgh was the quintessential Rust Belt city.

According to the 1950 census, Pittsburgh was home to more than 676,000 residents and was the 12th largest city in the country at the time. Steel was the city’s main industry. Aluminum, glass, petroleum and shipbuilding were also part of its economy.

Although Pittsburgh was thriving, the industrial smoke was sometimes so thick that the streetlights came on during the day. The conditions earned the city the nickname “Smoky City.” In an effort to clean up the city’s reputation for being dirty and polluted, civic leaders initiated projects to transform the city, and Pittsburgh began describing itself as a city undergoing a “rebirth.” It replaced its smokestacks with glass skyscrapers and its slums with contemporary neighborhoods. Pittsburgh was recognized as a city in transition. 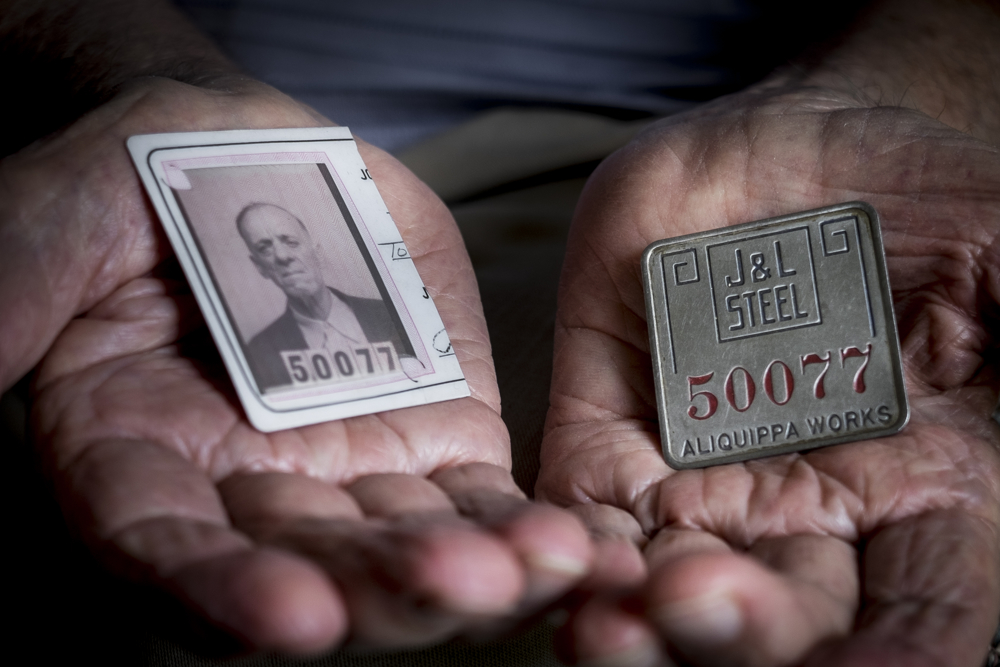 ©Pete Marovich, Pete Marovich, Sr., holds his father’s Jones and Laughlin Steel Company ID card and badge on June 7, 2015 near Aliquippa Pa., USA. The company cut Tom Marovich’s ID card in half upon his retirement after 37 years at the Aliquippa Works.

Pete Marovich is an independent documentary photojournalist based in the Washington, D.C., metro area. He began his photographic journey as a staff photographer at a medium-sized daily newspaper in Indiana and a stringer for the Associated Press. From 1986 to 1999, Pete worked as a contract photographer for major golf publications covering the professional golf tours. His work has been published in Sports Illustrated, Golf Magazine, Golf Digest, GolfWeek and many international golf publications.

He returned to newspaper photojournalism in 2001 and became director of photography at the Daily News-Record newspaper in Virginia in 2005. While at the Daily News-Record, he was named the 2008 NPPA Region 3 Photographer of the year, as well as runner-up in 2006 and 2009. Region 3 includes Delaware, the District of Columbia, Maryland, New Jersey, Pennsylvania, Virginia and West Virginia.

Images from his independent coverage of the 2009 Presidential Inauguration were included in Barack Obama: The Official Inaugural Book and are in the permanent collection of the Smithsonian Museum of American History. In January of 2010, Pete began pursuing personal documentary projects while working as a contract photographer for ZUMA Press. From 2010 until 2013, Pete was the Washington D.C. Bureau Chief for ZUMA Press, covering the White House and Capitol Hill.

Pete lives in the Washington, D.C., metro area with his wife, Jenny Jones, and their two cats. 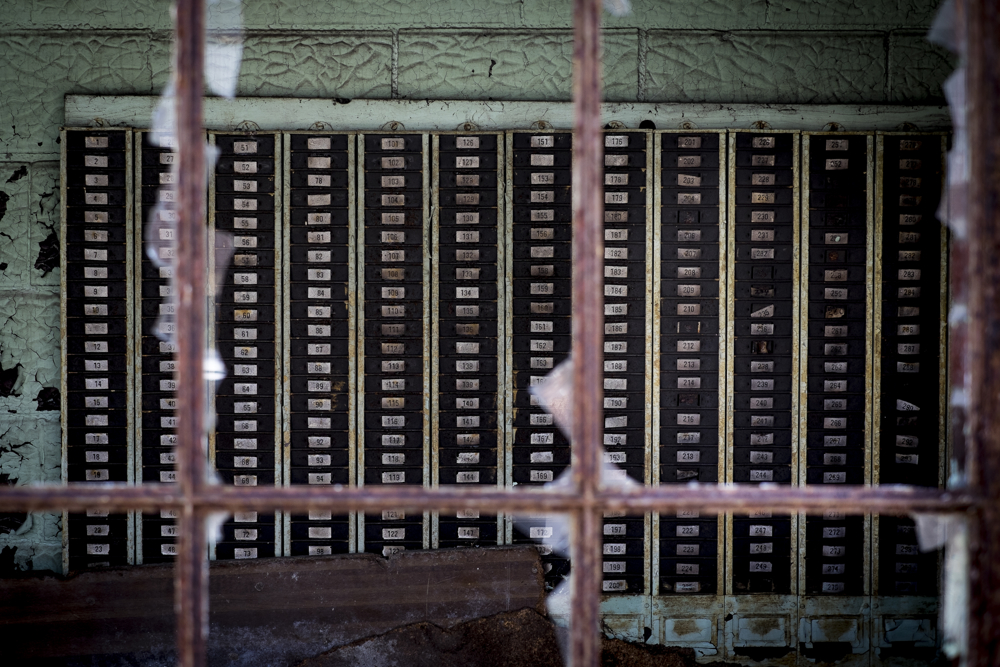 ©Pete Marovich, Time card file in the abandoned Fort Pitt Steel Casting plant in McKeesport, Pa. By early 1984, operations at McKeesport Steel Castings had all but ceased. McKeesport has a population of about 20,000 now down from over 55,000 in 1940, with the decrease due to the decline of the steel industry. The major employer was the National Tube Works, a manufacturer of iron pipes, which once employed 10,000 men. National Tube closed in the 1980s, following the other U.S. Steel plants in the Monongahela River Valley.

More than 25 years after the crash of the steel industry, Pittsburgh, Pennsylvania, which was once the epicenter of steel production in the United States, is said to be experiencing a rebirth, with a rapidly growing economy largely based on healthcare, education, technology and banking.

This may be true for Pittsburgh proper, but the scene looks a lot bleaker for the towns along the three iconic rivers that converge at the city.

Ironically, the steel industry that brought Pittsburgh international fame existed almost entirely outside of the city limits, on the banks of the famous Allegheny, Monongahela and Ohio rivers. The only exception was a Jones and Laughlin complex on the Monongahela River. Other famous steel mills were located farther upstream in the towns of Homestead, Rankin, Braddock, Duquesne, McKeesport and Clairton. Downstream, along the Ohio River, stood mills in Ambridge and Aliquippa. 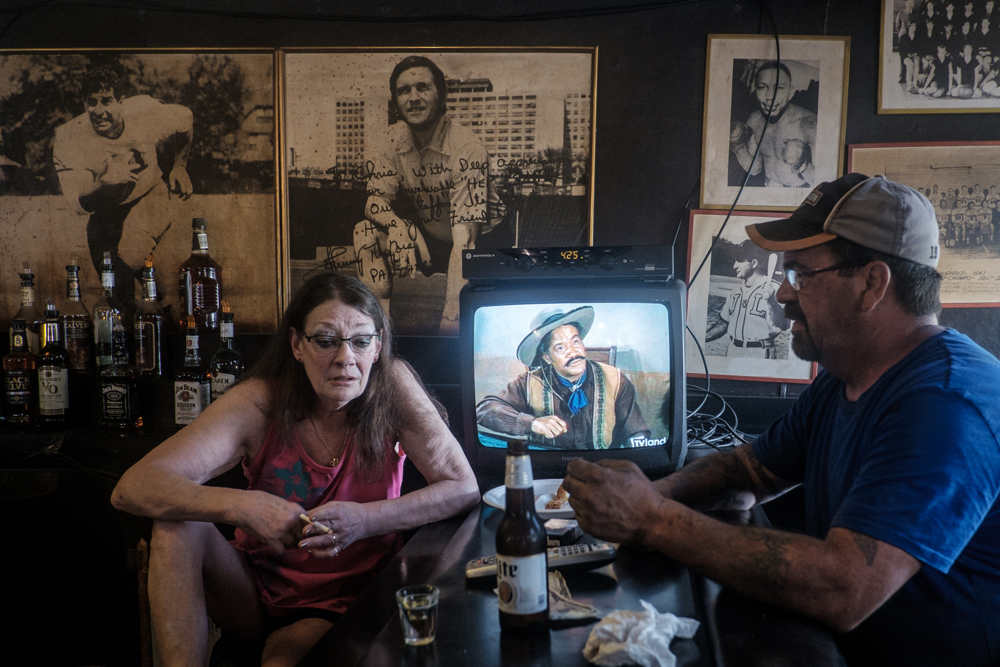 After the steel industry crash, many of these municipalities entered Pennsylvania’s Financially Distressed Municipalities Act 47 program that was created in 1987 to help them regain their financial footing after their tax bases were decimated when the steel industry collapsed. Several of these towns including Aliquippa, Braddock, Duquesne and Rankin have been in the program since its inception and are still struggling to exit Act 47.

Donald Trump campaigned on the promise of bringing steel production back to its former glory and this portion of the rust belt helped him win the election. These promises may be hard to keep since there are many reasons other than foreign competition and perceived bad trade deals that caused the decline here, including labor disputes and automation of the manufacturing process. 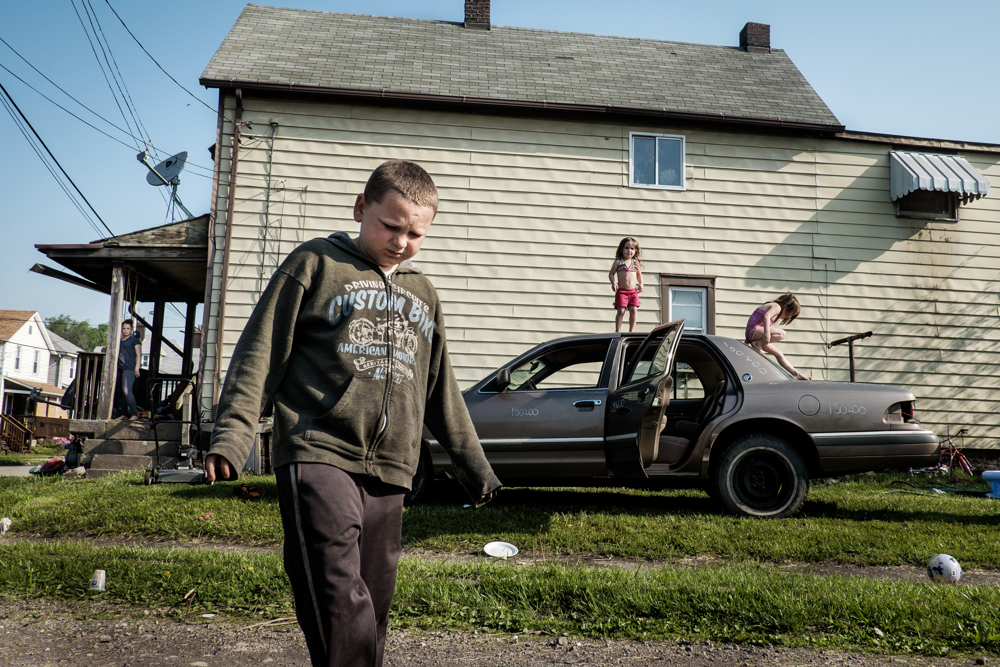 ©Pete Marovich, Children play on their dad’s demolition derby car outside of their home in West Aliquippa, Pa. USA, on May 8, 2015. Since 1987, the city has been designated as a distressed municipality under the state’s Act 47, a law that created a recovery program that’s helped some 29 municipalities in the state stay afloat. The city now has fewer residents now than the local steel mill had employees (14,000) in its heyday. The mill closed down for good 20 years ago. With few good job opportunities available, children who grow up in the area may be faced with tough economic times when they are ready to join the workforce.

This is a personal story for me. My mother and father were born and raised in Aliquippa, home to what was at the time the largest steel mill in the world, the Jones and Laughlin Aliquippa Works. 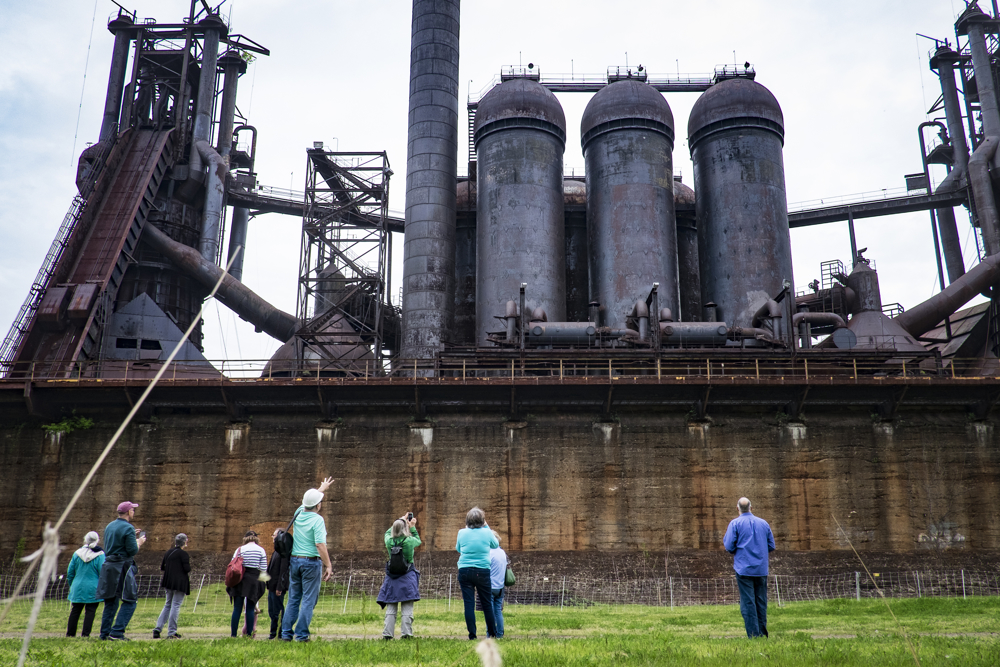 ©Pete Marovich, A former steel worker guides site seers on the grounds of the former Carrie Furnaces in Rankin, Pa. The furnaces were built in 1881 as part of U.S. Steel’s Homestead Works, a sprawling 400-acre complex that spanned both sides of the Monongahela river. They produced up to 1,250 tons of steel a day until 1978 when they were closed. While the majority of the site was razed for a shopping center, the 100-foot high furnaces still stand. They are an extremely rare example of pre-WWII ironmaking technology. The furnaces were designated as a national historic landmark in 2006 and preservation efforts are underway.

I have seen firsthand how Aliquippa has declined. My parents and relatives tell stories about how wonderful and bustling the town was before the decline of the steel industry and the closing of the mill.

These stories and memories compel me to tell the story of Aliquippa and the other mill towns and their people. The immigrants who settled in these towns came with dreams of a better life. And for a while, it seemed as though those dreams would be realized in the streets of their new home. But many of the people living in there today are doubting that those dreams still exist. 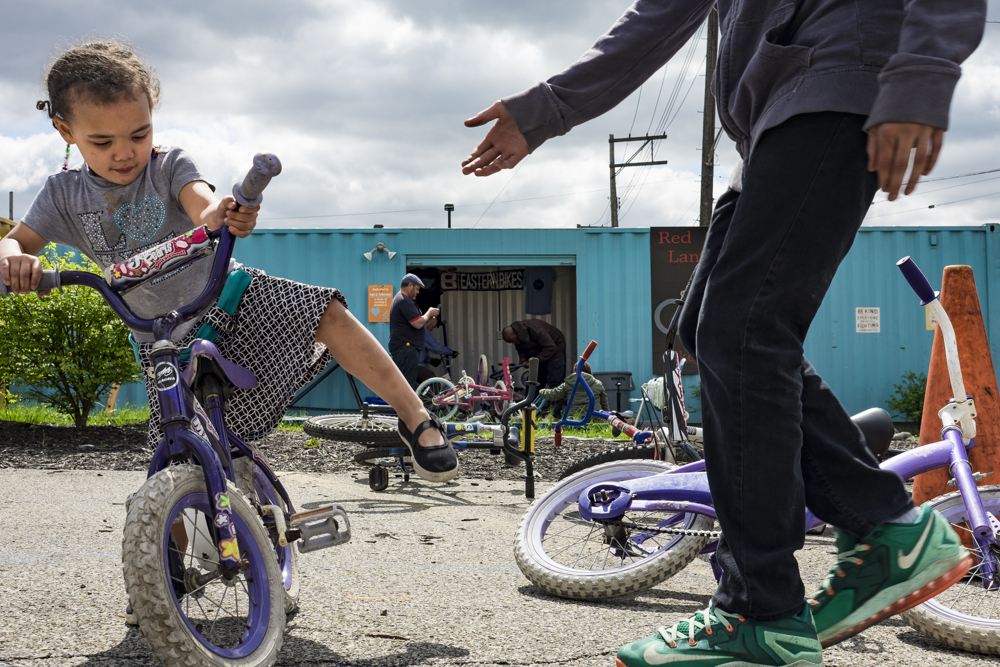 ©Pete Marovich, A young girl selects a bike at the Red Lantern Bike Shop in Braddock, Pa. Brian Sink opened the Red Lantern Bike Shop opened in 2012 with the idea to provide bike repairs and free bikes for residents of Braddock. But after it became popular they lifted the restrictions on residence. Sink said he gave away about 1,100 bikes last year. Sink, known around town as “The Bike Guy,” fixes donated bicycles and gives them away for free at his shop that is housed in a shipping container and part of Gisle Fetterman’s Free Store. The Free Store, receives surplus and donated clothing, school supplies, food and toys that are redistributed to people in need. 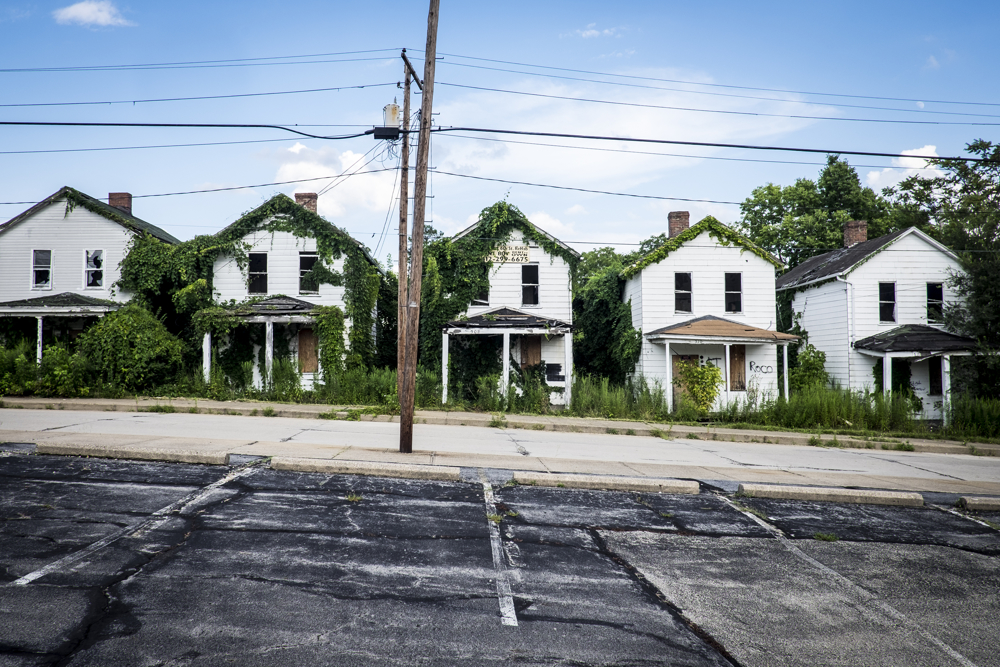 ©Pete Marovich, A row of homes are slated for demolition in Monessen, Pa, when the town has the money available to have the work done. Monessen, a third-class city, faces the same problems as the other former steel towns  declining population and tax revenue after the mills shut down. The city’s population has dropped to 7,600 from a high of 20,268 in 1930. 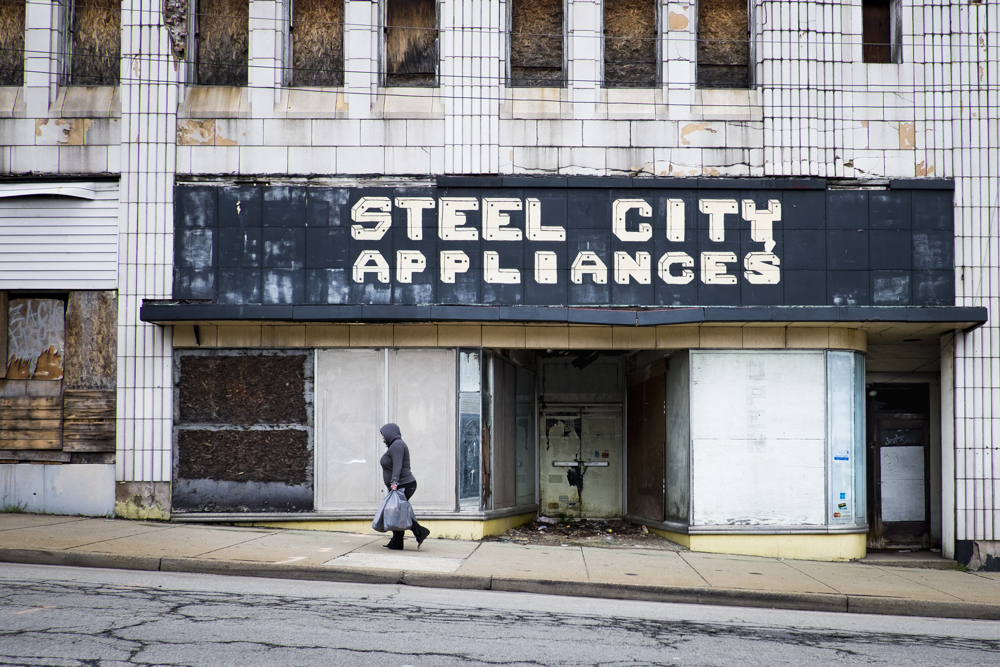 ©Pete Marovich, A woman walks up one of the main streets in Clairton, Pa., past the old Steel City Appliances store. About three-quarters of its main street is boarded up including the laundry, the grocery store, three out of five banks, the three cinemas, and most cafes and shops. When the Clairton Coke Works employed 5,000 workers and ran three shifts, Clairton had three movie theaters and four car dealerships. Now the plant employs 1,300 workers and residents must drive five miles out of town to buy food since there is no longer a grocery store in town. 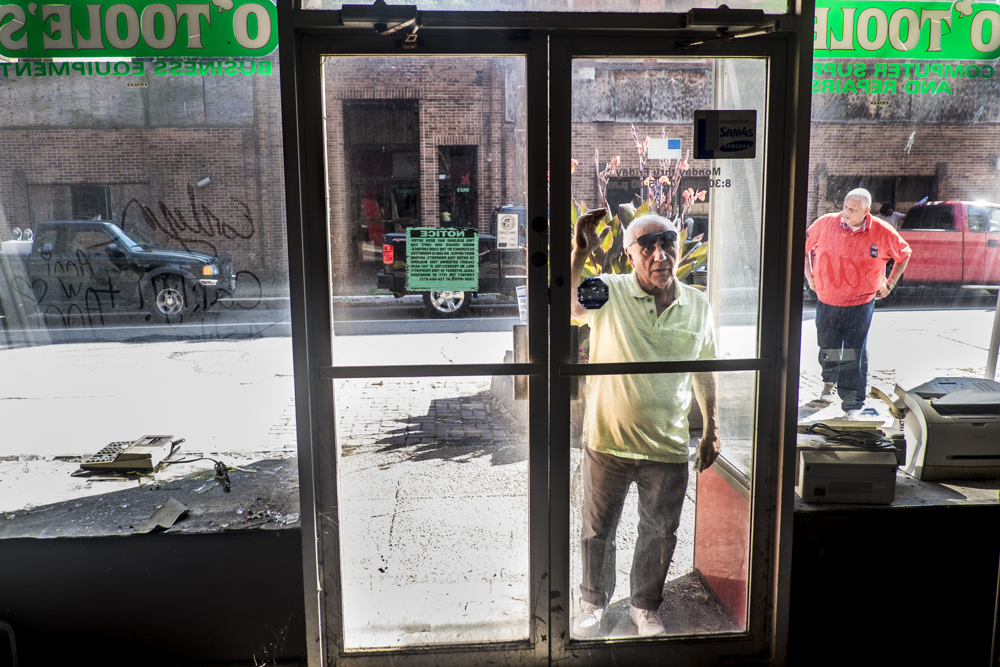 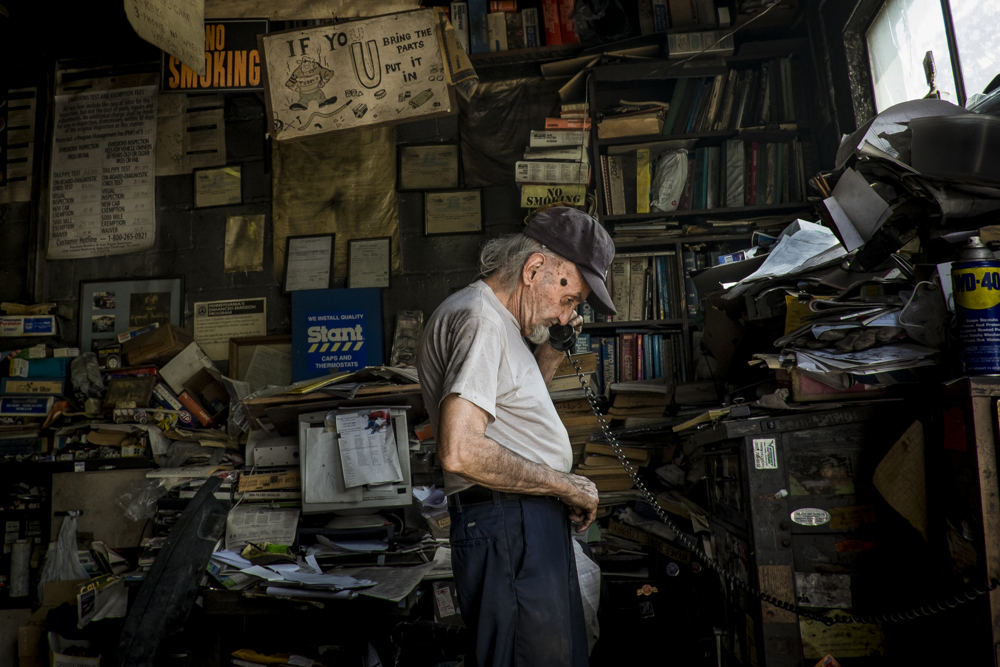 ©Pete Marovich, Angelo “Tubby” Galzarano, 79, speaks to a customer on the phone in his repair shop, Tubby’s Auto Service, in West Aliquippa, Pa. 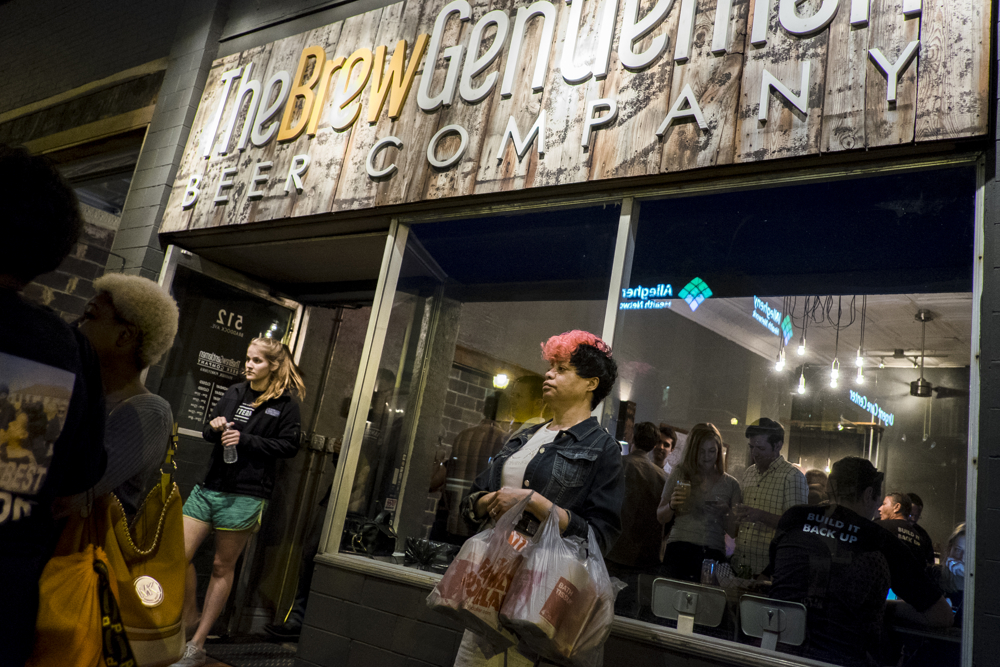 ©Pete Marovich, Braddock residents await election results during a party for Mayor John Fetterman at a local bar in Braddock Pa. on the night of the Pennsylvania primary. The three-term mayor of Braddock lost his bid to be the Democratic nominee for the United States Senate. 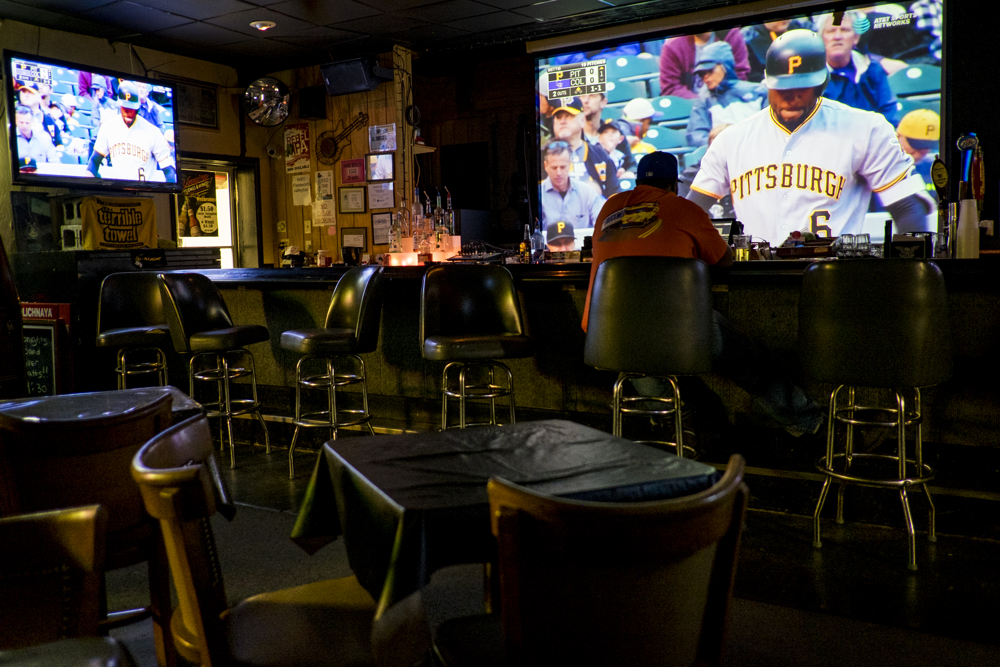 ©Pete Marovich, A lone patron watches the Pittsburgh Pirates play baseball on the big screen at the Valley Hotel Bar and Grill outside of Clairton Pa. Built in 1863 and was originally called The Granger Hotel, it was positioned in between two of the largest steel mills in the area. The Valley Hotel has long been the local watering hole for mill workers after a long day, or night, of work. With the local mills running at just a fraction of full capacity, the bar has struggled in recent years. 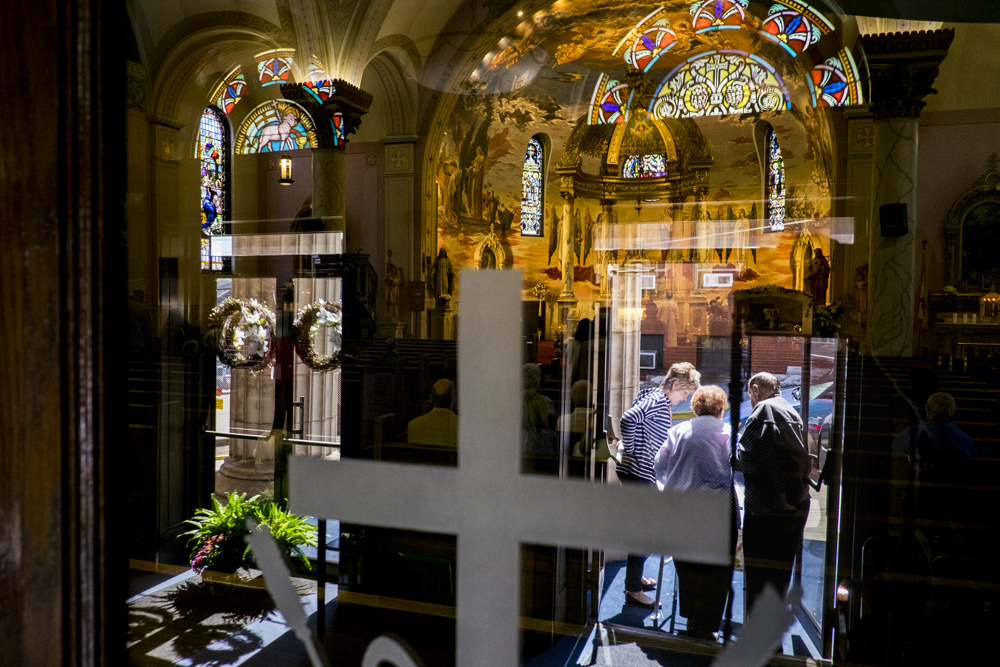 ©Pete Marovich, Parishioners leave following Sunday Service at Saints Peter and Paul Byzantine Catholic Church in Braddock, Pa. With a population of just over 2,000 (down from a high of 20,879 at the height of the steel industry, Braddock is almost a ghost town even though it is the home of the last steel mill still in operation in the Monongahela River valley. The Edgar Thompson Steel Works, built in 1872, was the first major steel mill built in the United States. Braddock was originally built to house the mill’s workers, but none of the mill’s nine hundred or so employees live there. 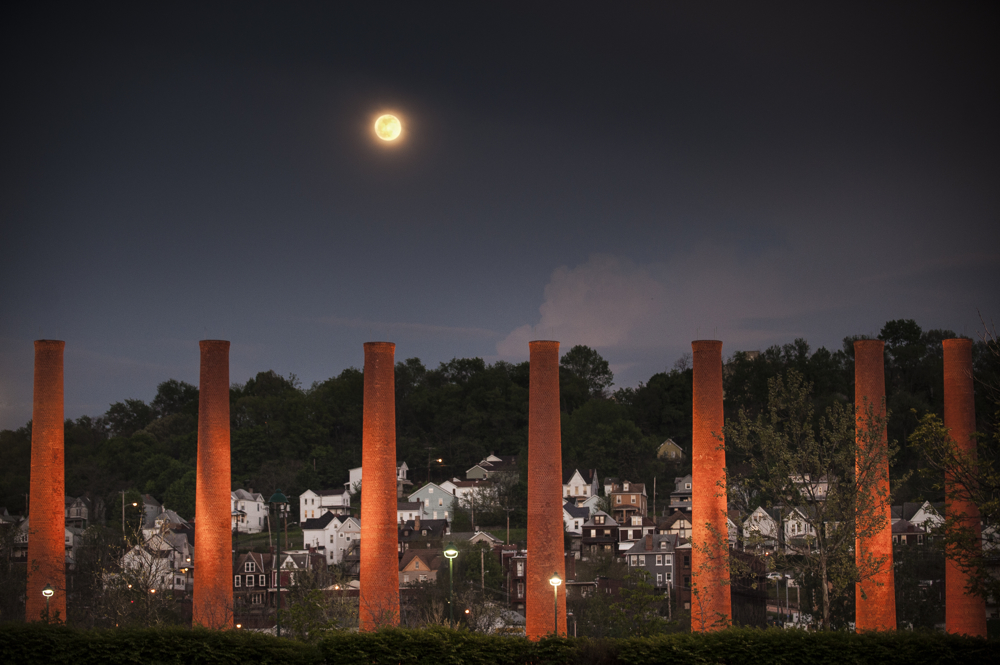 ©Pete Marovich, The open hearth stacks are all that remain of the US Steel’s Homestead Works that was located in Homestead, near Pittsburgh, Pa. The Homestead Steel Works was a large steel works located on the Monongahela River at Homestead, Pa.